My friend Mr. Niles, who was with me in Paris, & whom I had the pleasure of making you acquainted with there, will have the satisfaction of paying his respects to you in Washington. You are already acquainted with the circumstances which have led to his return to this country. The particular manner, in which he was superseded in the functions he was discharging, (as I have always understood), to the entire satisfaction of the government, could not fail to make a fanciful impression on his feelings, & to inflict an injury on his standing both at home & abroad. Under these circumstances, I earnestly hope that the government will be induced to give him a mark of it’s continued confidence, in some appointment connected with the foreign service in Europe; for which I think he has most valuable qualifications in uncommon habits of business, great energy & activity, & an experience & intelligence, especially familiar with the language & usages of the country in which he has resided for the last six years. I have heard it suggested that the gentleman, designated for the consulate at Paris, may ultimately decline that destination. In that event, I do sincerely believe that no man could be found so eminently qualified, in all respects, for the useful & satisfactory discharge of its’ duties as Mr. Niles. But should there be no vacancy in that quarter, I hope the government will offer him something else which may be acceptable, & which will serve to re-establish him in the estimation he has hitherto enjoyed, but which the manner of terminating his functions at Paris must necessarily have, more or less, impaired.  I beg leave to ask your kind feelings & good offices, on his behalf. I should feel myself indebted to the government for a high personal gratification in any thing which may be done for one, in whose welfare an official connection of several years, affording me good opportunities of appreciating his character, has given ^me^ a lively & affectionate interest. Mr. Niles is of a sound republican stock, (the son of a gentleman, I understand, who as a representative in the early congress from Vermont proved himself true & firm in that faith), thro’ his extended connections & acquaintances in New-England, will himself be able to serve the same cause with the fidelity & zeal, of which his father set him the example. I hope sincerely that something will be done for him, evincing the continued & undiminished confidence of the administration in him.

Mr. Niles will be able to give you a correct account of the state of the political contest in the “old dominion.” The nullifiers are noisy, turbulent & untiring in their exertions, but I firmly believe that, backed by the good sense & sound patriotism of the people, we shall beat them. They have made me the butt of <all> their ^most pernicious^ attacks, & recently of a ruffianly & dastardly personal assault, for the particulars of which I refer you to Mr. Niles, who has gathered them all, in his communications with men of both parties.

Mrs. Rives desires her best respects to you, & joins me saying that we should be most happy to have the honor of a visit from you here. We propose making a visit in a few weeks to our Springs in the western part of the State, but not ‘til’ the 1st of next month.

Hoping soon to have the pleasure of hearing from you, I remain with cordial respect & attachment 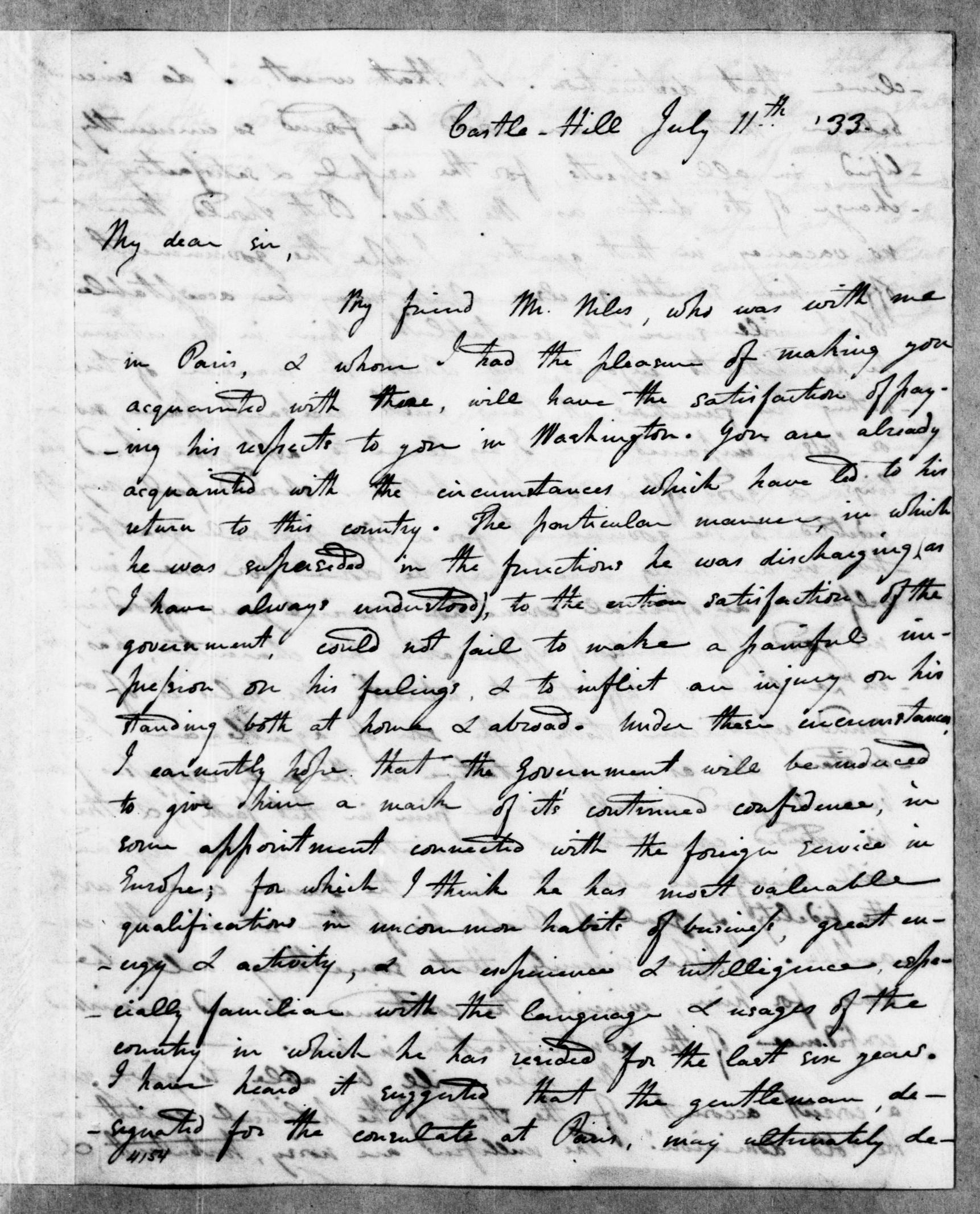 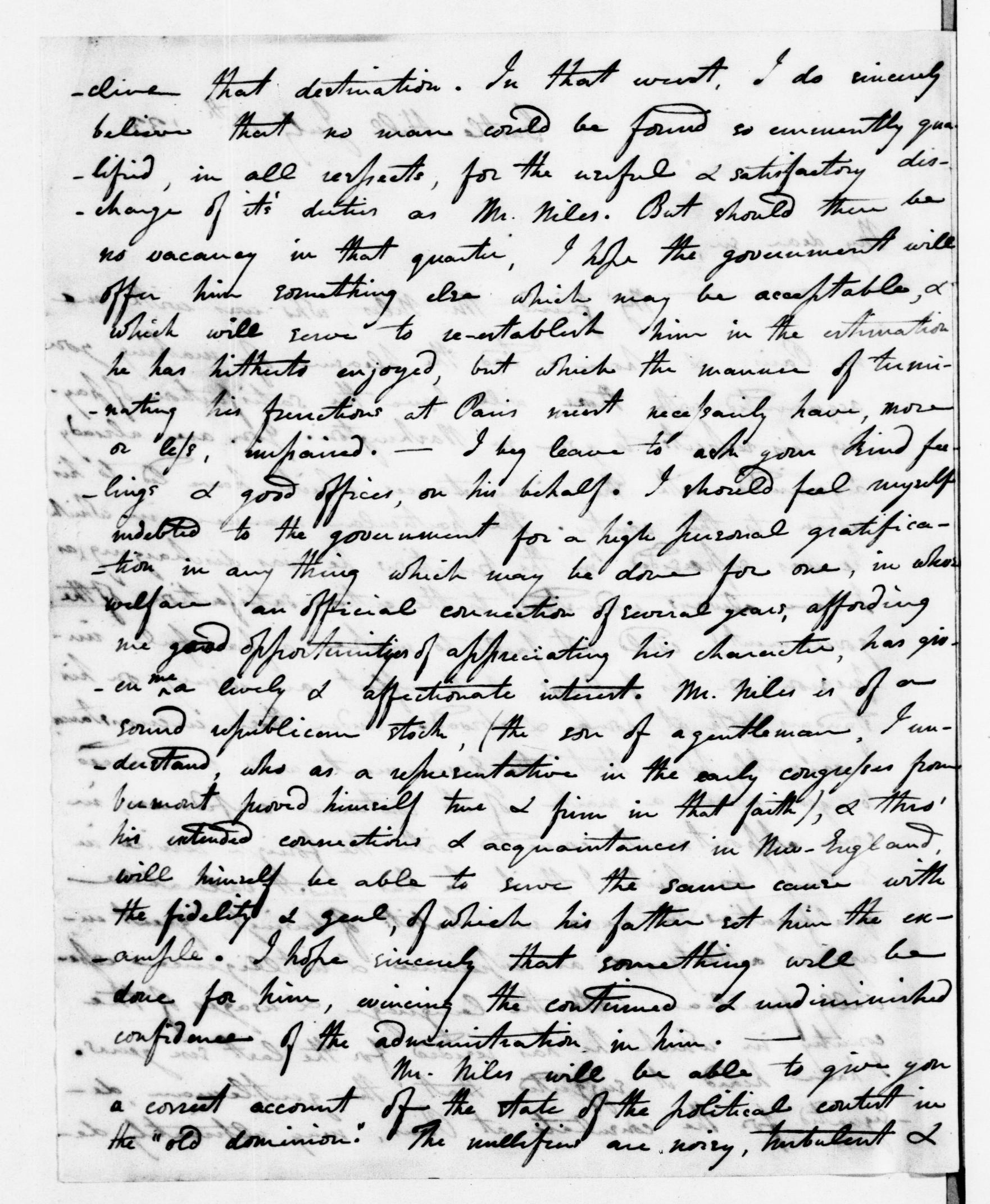 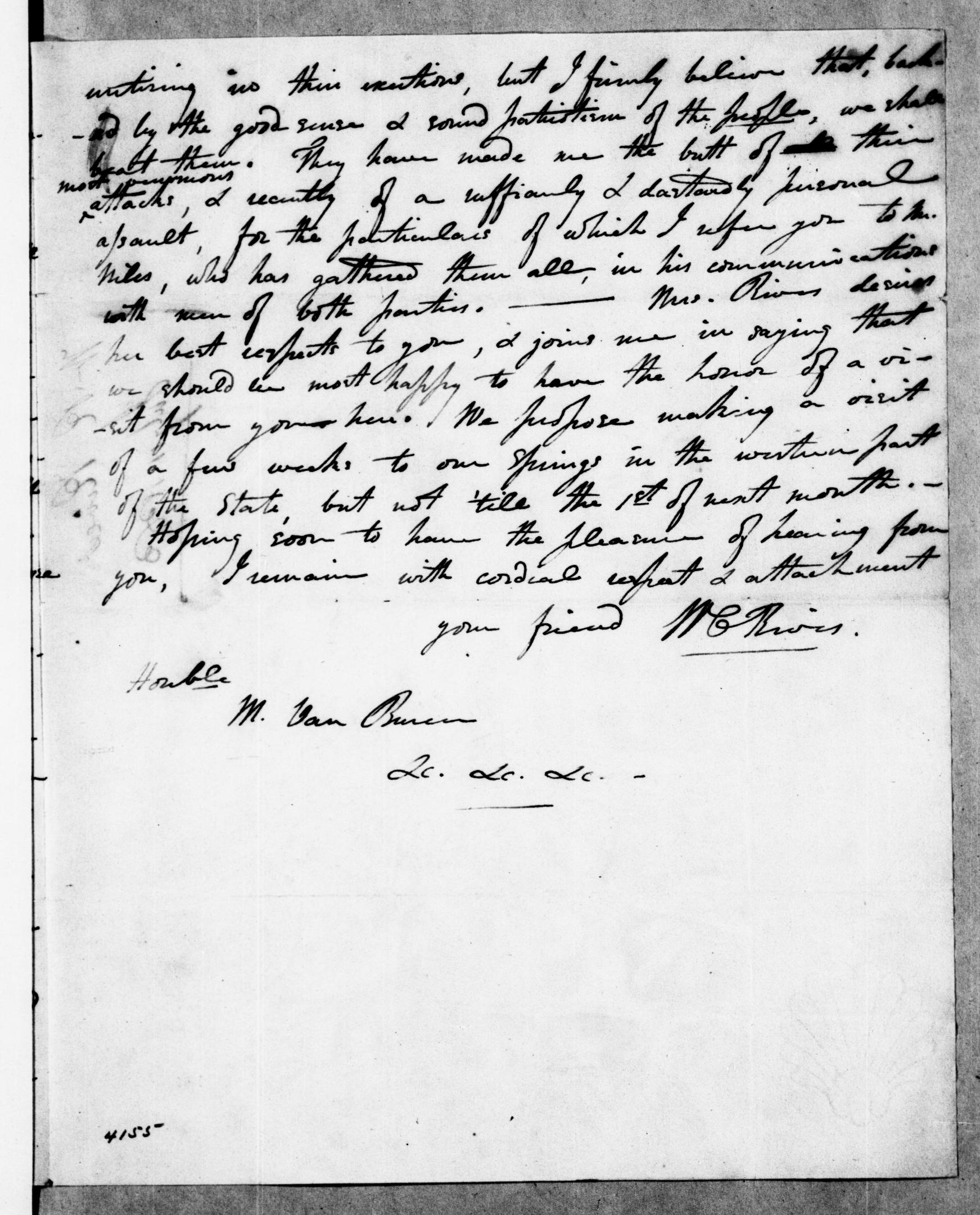 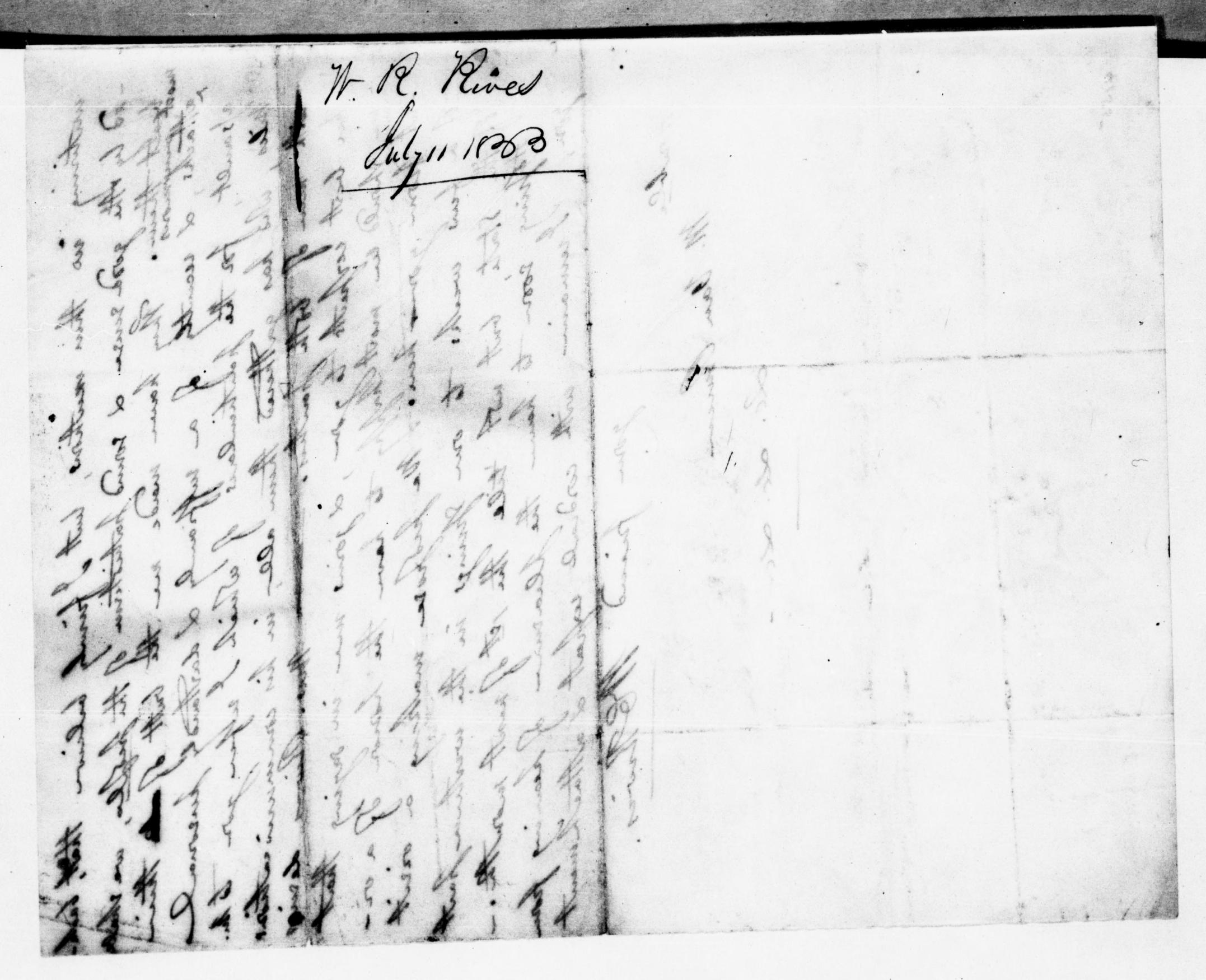