I left Washington on the 7th instant intending to go directly to Lexington Kentucky, but the dreadful pestilence which has desolated that City, and which pervades many parts of the State, has caused me to remain a short time in this City which I leave in the morning for Lexington, the health of the latter place having improved so as to render it safe in the opinion of my friends to go there. Every body in this quarter feels the most intense interest in all that relates to the President. The news of his indisposition at Boston created the most painful <illegible> in every patriotic bosom. It is believed by many here, that he has preserved the Union by his course and the influence of his character, and that the preservation of his life is all important to subdue the spirit of insubordination in the south. Judge <Burnett> & Colo. Carr, the former you know, the latter is a worthy man hitherto, a friend of Mr. Clay, both declared to me more than once, in strong terms that they considered it fortunate for the country that Genl. Jackson was elected in preference to Mr. Clay. Mr. Webster was treated very kindly in this place, it was owing to the friends of Genl. Jackson that he was, of which he is fully sensible. Mr. Clays friends & especially his <banke> friends, were cold, and are dissatisfied with the speech of Mr. Webster at the dinners. It was a patriotic <effort> in which the previous administration was highly <complimented>. I was invited, but did not attend the dinner on account of the deep affliction of my friends in Ky: but I saw Mr. Webster frequently and he was very friendly. Mr. <Hailes>, and others of this place accompanied Mr. Webster from here to Wheeling Va: and of course had much conversation with him, he reports on his return that Mr. Webster is fully sensible that he owes his kind <illegible> here to mainly to the friends of Genl. Jackson. Mr Clay is utterly prostrate here. Judge Mc.Leans friends are wavering against him, they see & feel it, and will be found in opposition to Judge McLean. The ranks of the opposition appear to be broken completely, and they do not know who to unite on. I think they are looking out for the strongest man. Majr. Williams the Commissioner of the Genl. land office, who resides here, one of the best informed men that I have met within the state, tells me that the strong sentiments now amongst the people, that is paramount to all others, is the preservation of the Union; that he has heard those who were heretofore opposed to Genl. Jackson declare, that they believed he had saved the Union, that such was their confidence in his firmness intelligence & patriotic views, that if he should die, or when he ceases to be the President, that they will support for that high office in preference to any other the man whom Genl. Jackson <thinks> it will be safe to trust.  I always knew him to be popular, but I had no idea of the enthusiasm that pervades the public mind in his favour, until I mingled with the people. I attended the <church> and heard the 4th. of July orations delivered by a Mr. Thomas of this place, he is in the opposition: his speech was pretty good but rather commonplace; he made no mention of the President; but after the <canvassing> was over, and the people were <moving> and you could hear them name Genl. Jackson with a in warm language as the second saviour of our country, I find that you have many friends in this state. The U.S.B. men do not like you; and I think their opposition will rally the democracy of the State in your favor. I find Majr. Williams, Mr. Lytle, Mr. <Beecker> P.M. decidedly friendly. Indeed many of those who attended the Webster dinner are friendly. A gentleman of the State Senate, who I met here, Mr. Willey of Cleveland, who was once the friend of Mr. Clay, is now yours; he is a man of tallents and influences in the state. Judge Goodenow (late member of Congress now Circuit Judge) is also friendly. Some speculations are afloat as to the Vice Presidency for the next term. Govr. Miller of Mo: is now in this state, he is evidently moving in favor of Colo. Benton for that office. Other names are mentioned but the common opinion of all the friends of the administration is to await the nomination of a general Convention. I have at a moment of leisure & in great haste written this supposing it might be agreeable to you to be informed of course of the passing events in this quarter. Knowing too that you are near the President, <illegible> I wished the opportunity through your kindness to present him my salutations, without troubling him to read a letter that I intended to have written, but which in the many engagements that press upon him in his tour he would hardly find time to read, without too much trouble I request that you will present me to the gentlemen of the Presidents family. Mrs Barry. enquiring at this moment to who I am writing, desires to be kindly remembered to you & requests you to present her most affectionately to the President

I am my dear Sir at all times

most sincerely & truly yours 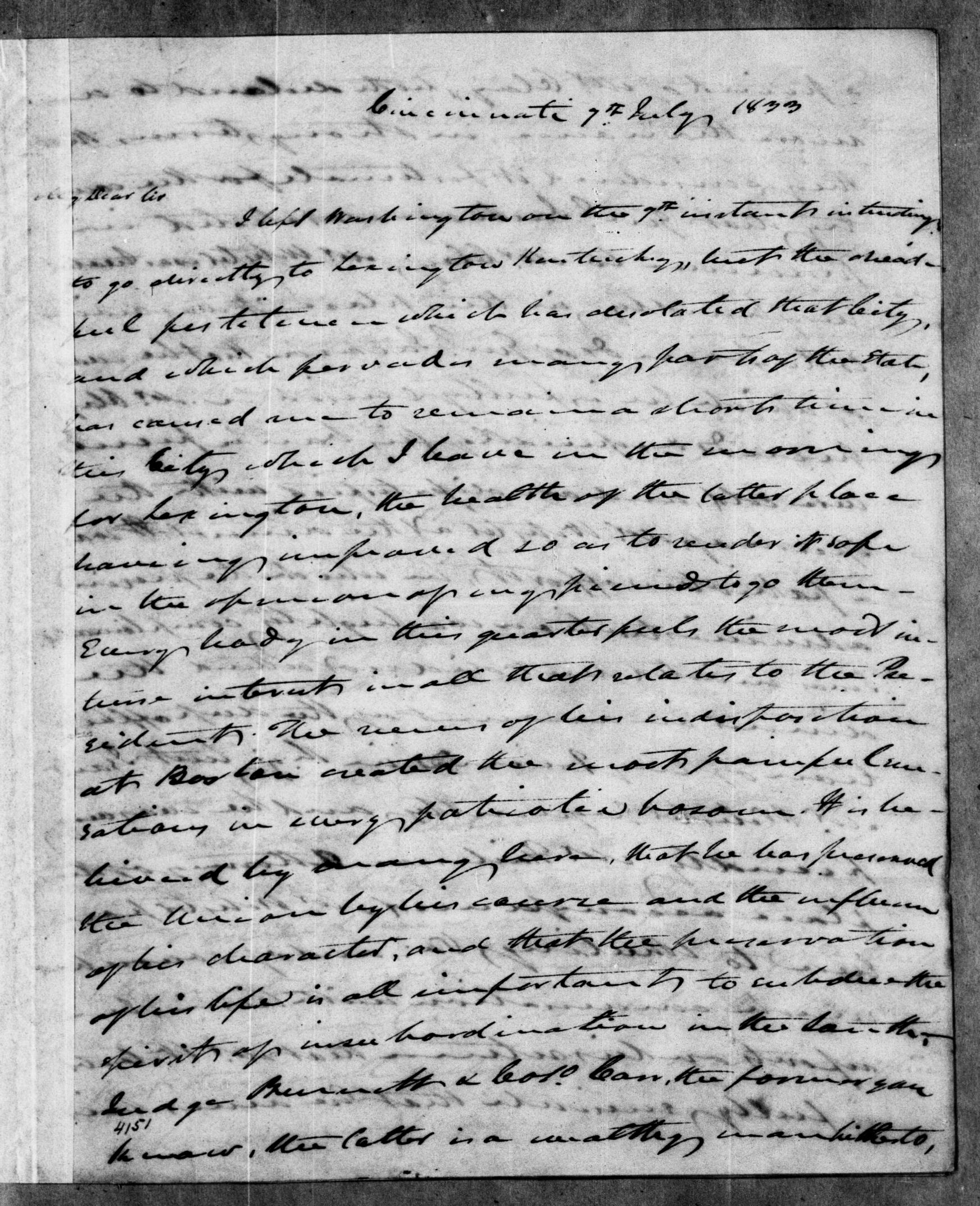 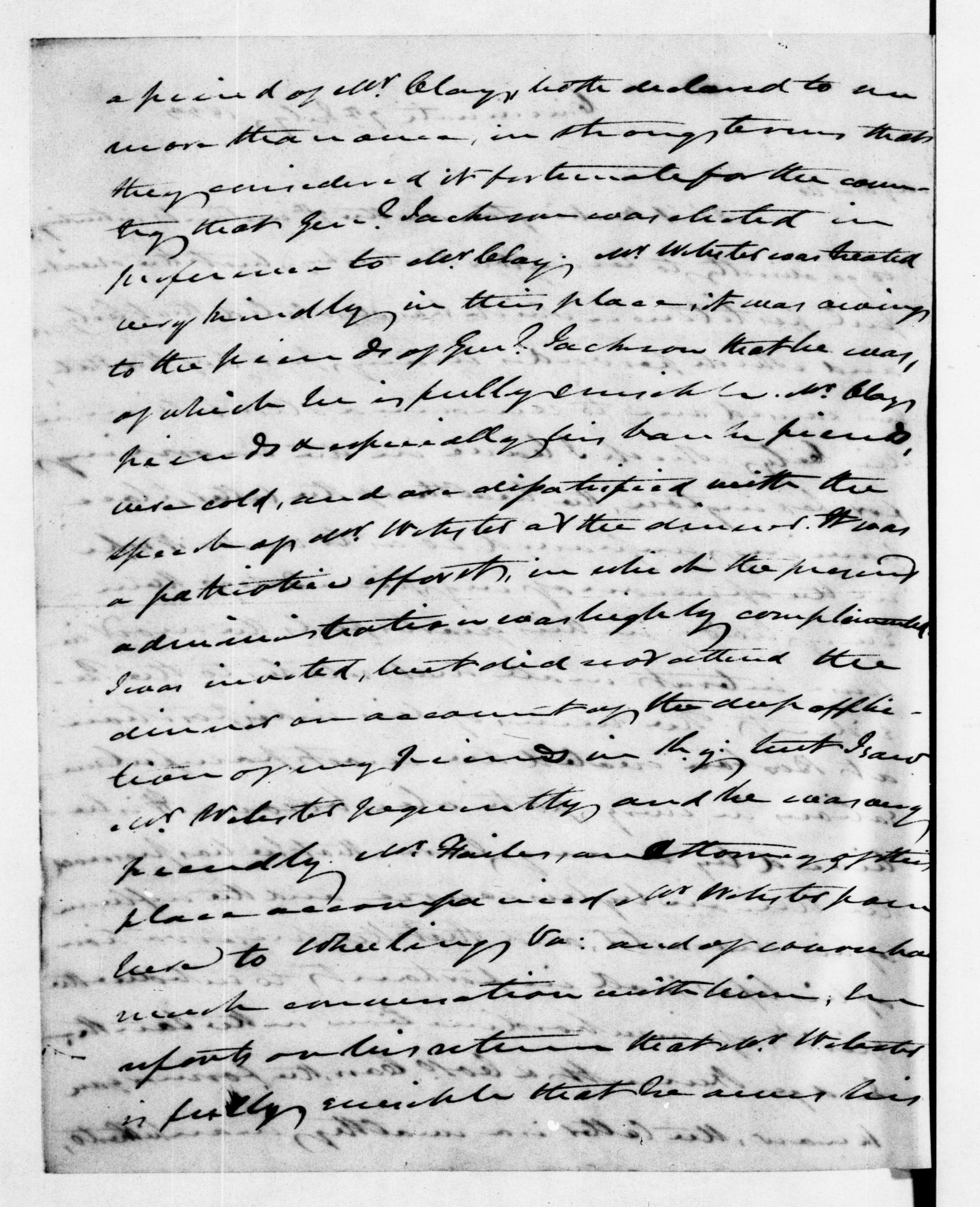 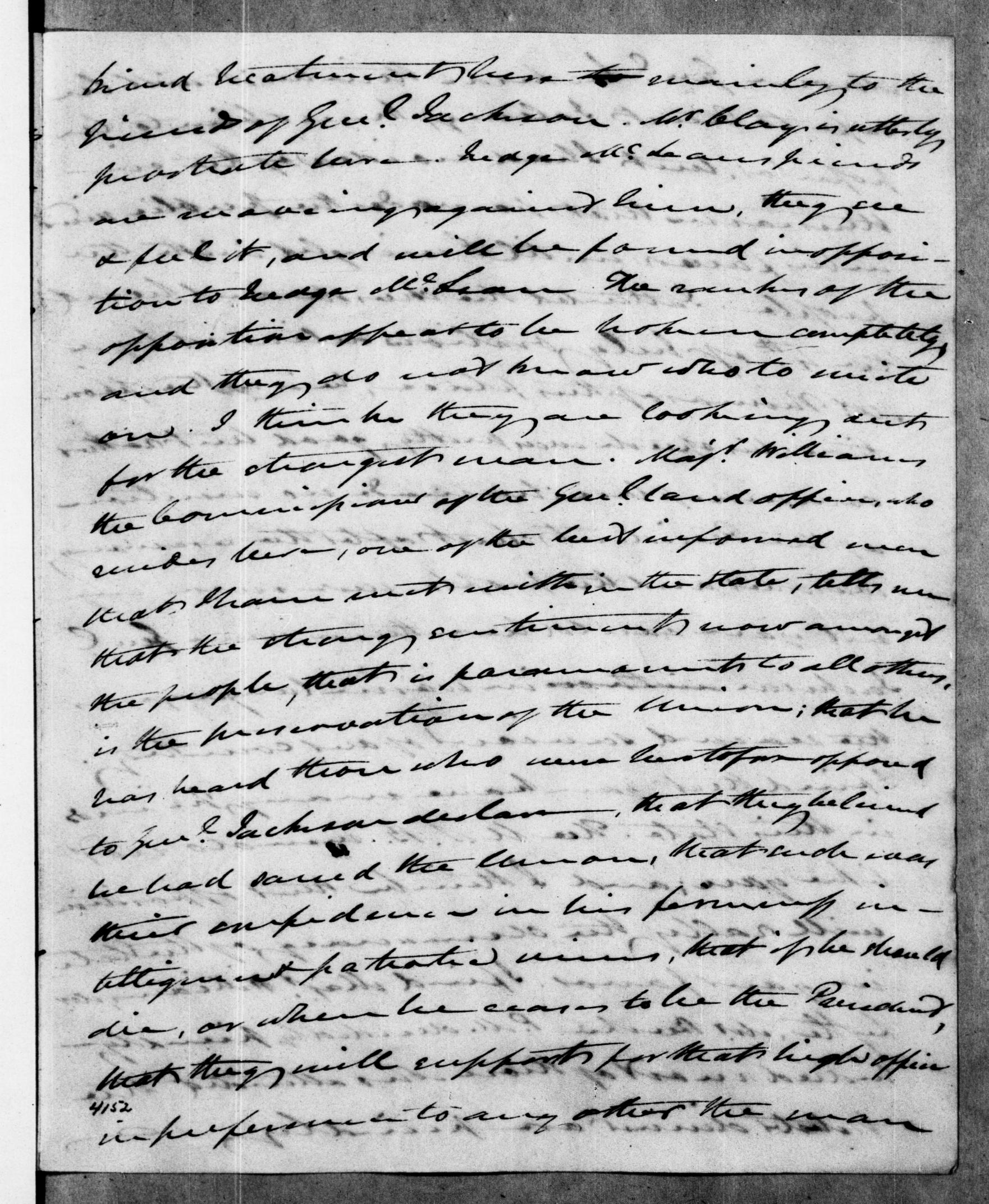 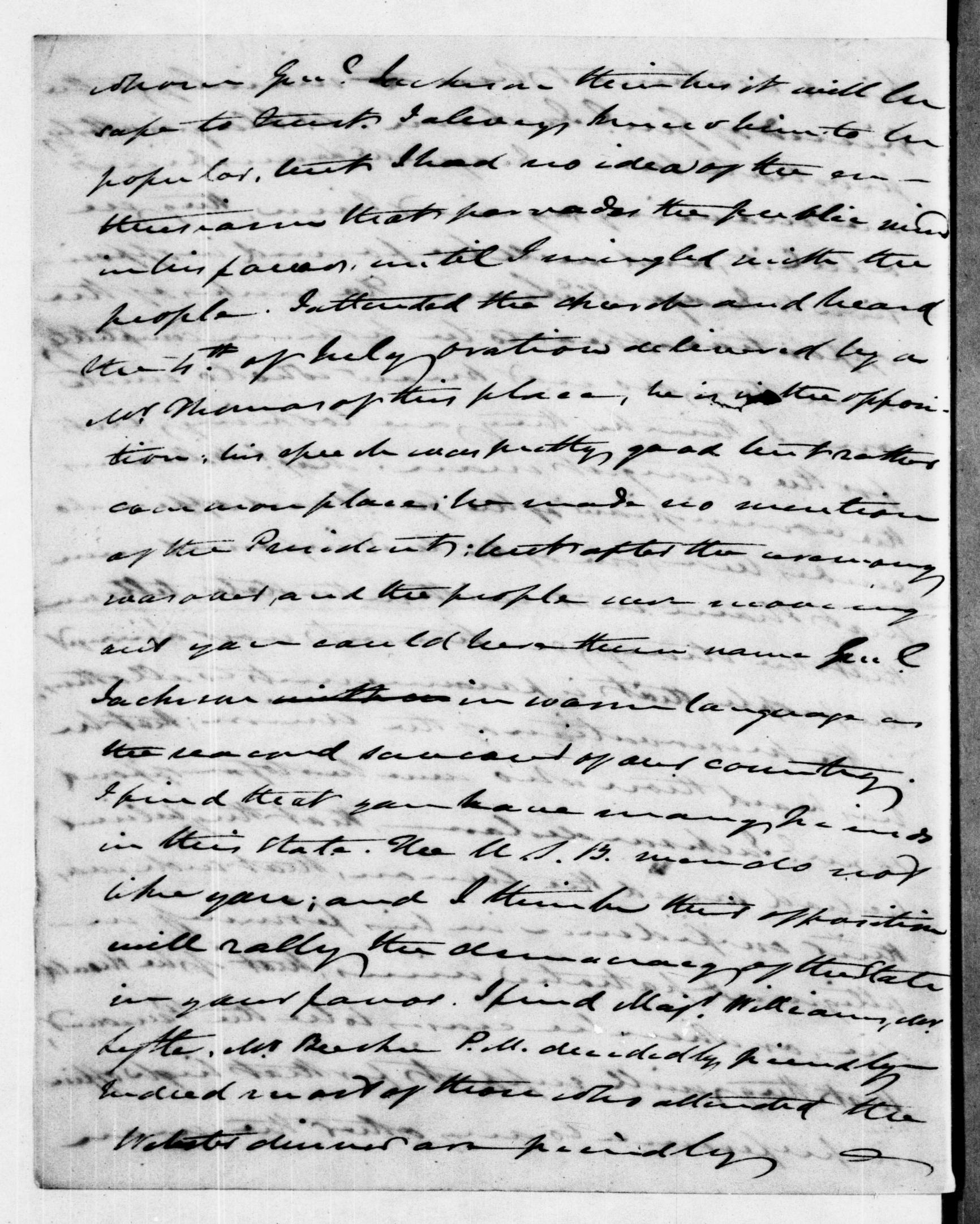 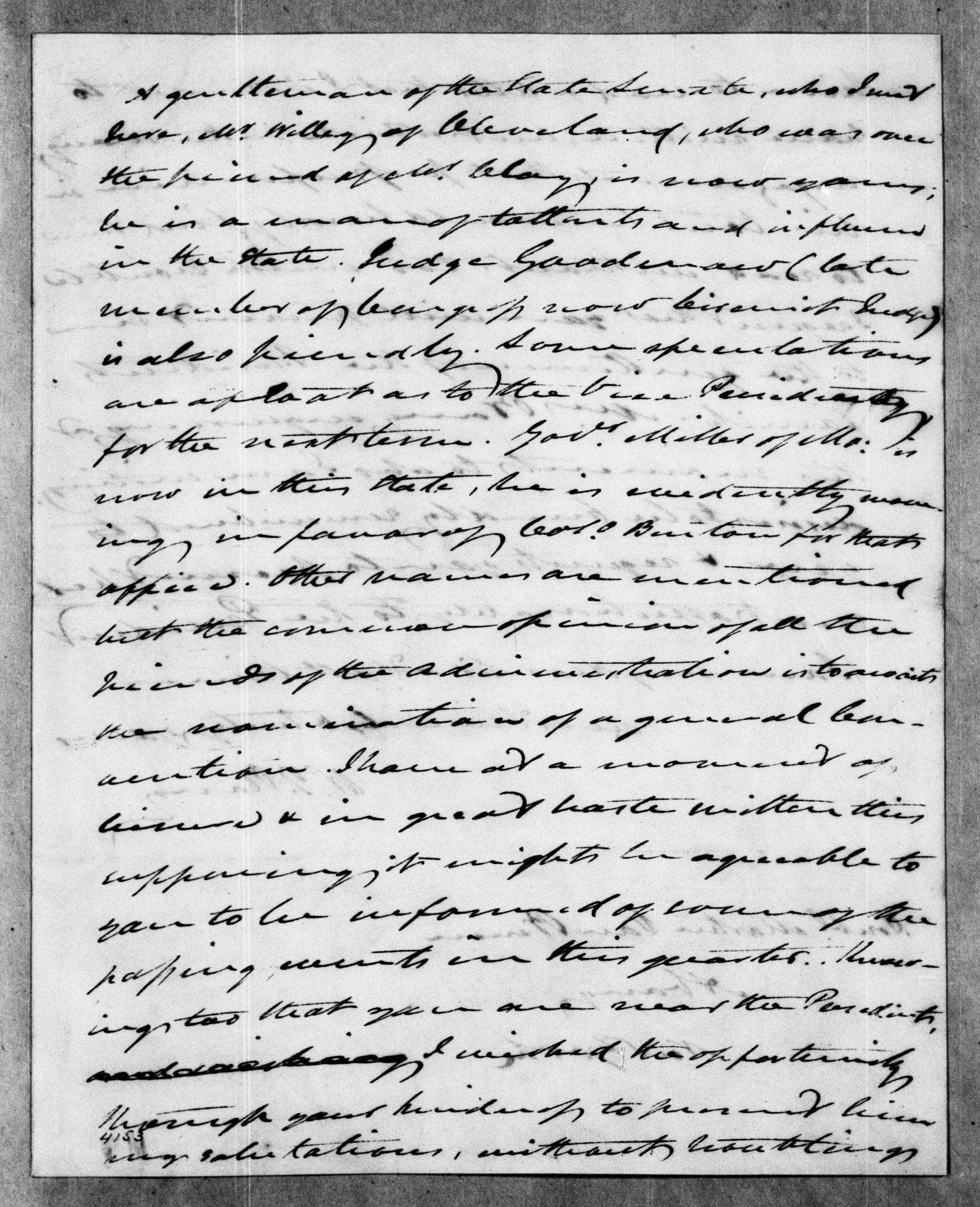 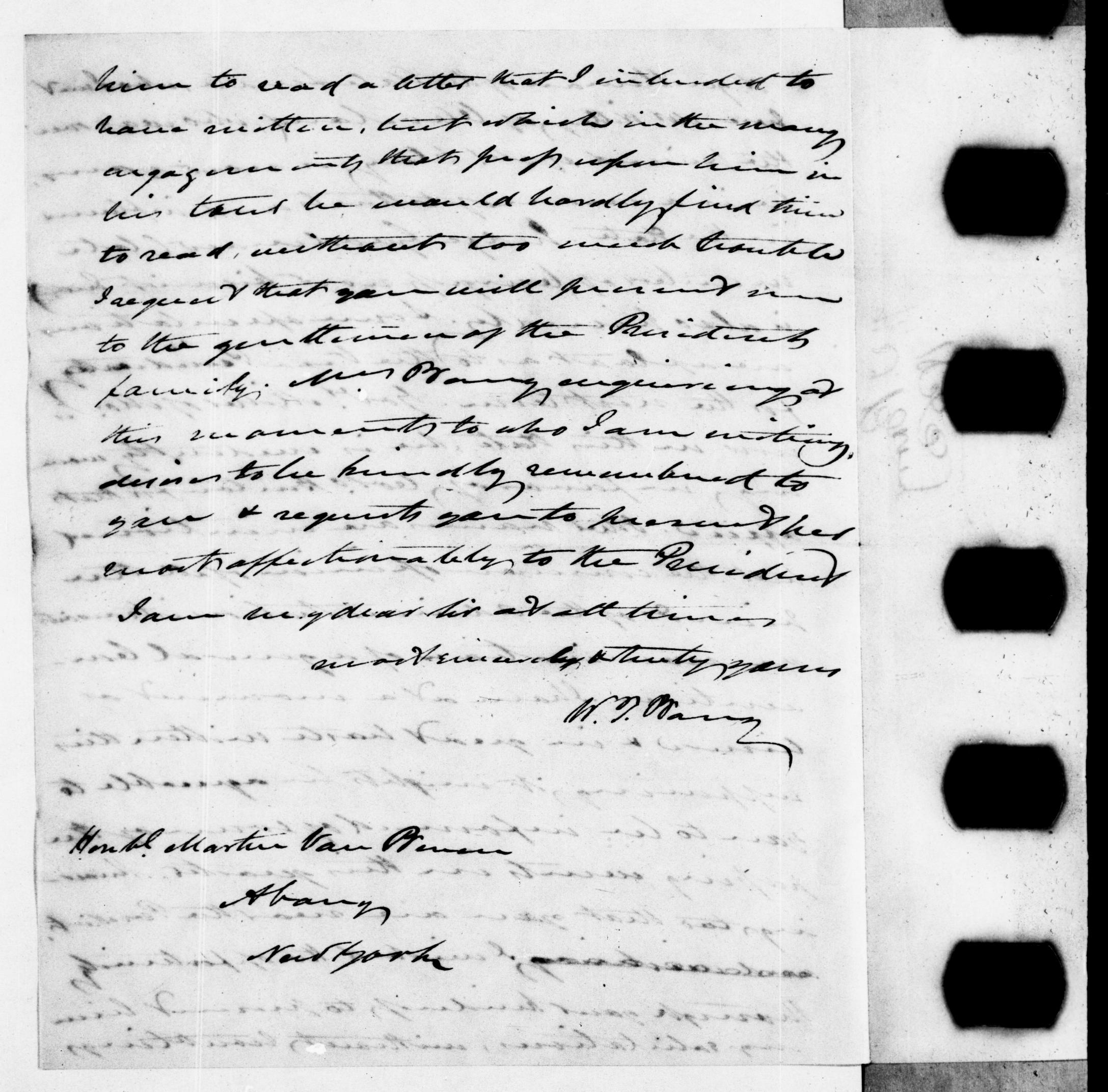 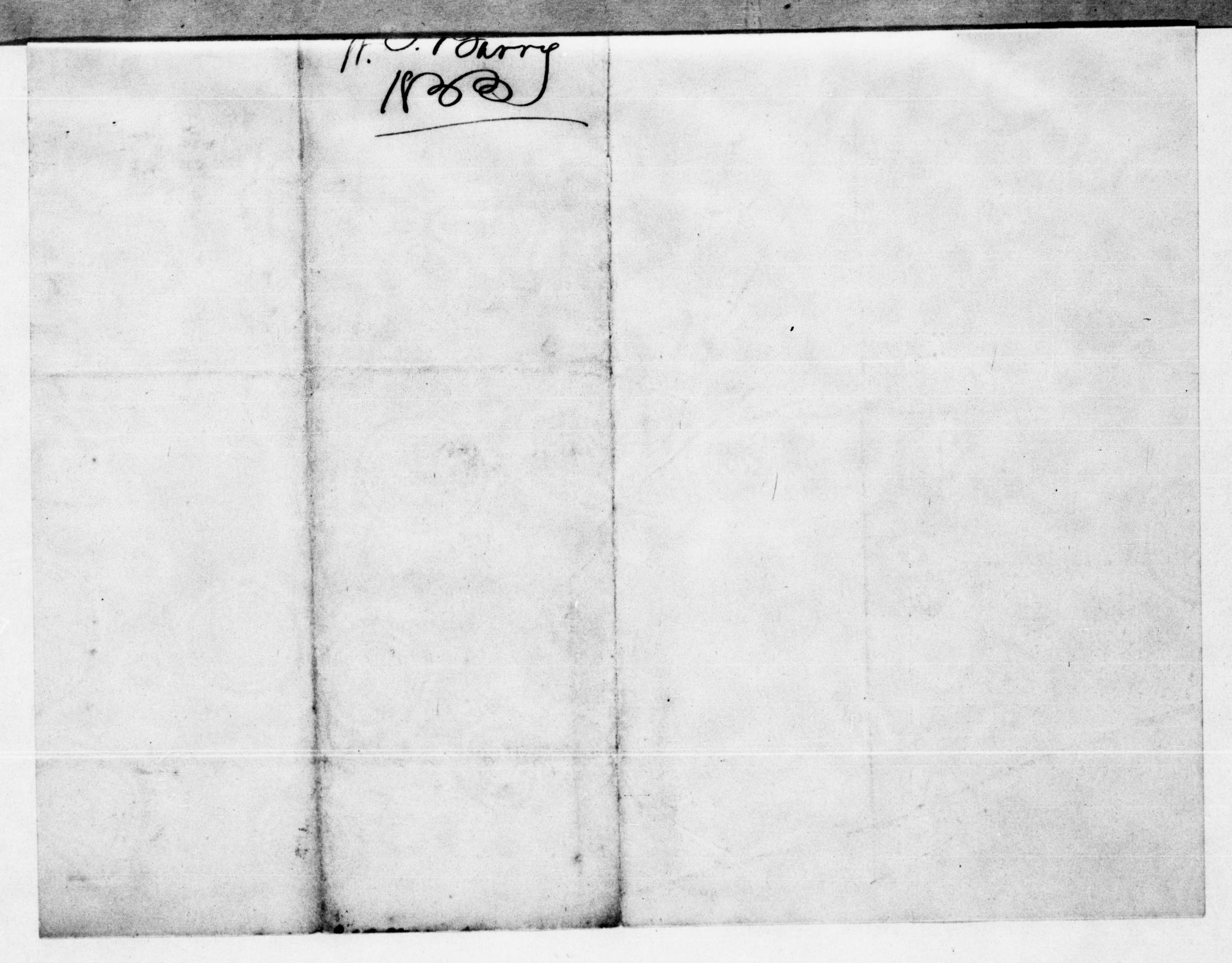