(although its long please read it)

Under peculiar, and very unpleasant circumstances I now set down to drop you a few lines, and also forward a paper published at this place by a political enemy. The mar<tial> article will give you the immediate reasons for this addressing you. My object in so doing is that the paper and letter may both reach the President, that he may see how his friends are punished and his violent abusive enemies are favoured by the Administration of Geo. Wolf, ere his arrival at Harrisburg. Please excuse me for going into a detail. I trust in Martin Van Buren I have a friend, and therefore think he will excuse me. I held a clerkship in the Auditor Genl.’s department, over which presided Danl Sturgeon. The office was given me because I was a friend of the National and state Administrations, and from this course that I have ever deviated I challenge my bitterest political enemy to say. When Samuel D Ingham was removed, I praised the act, and it was the first of my offence. This gave umbrage to my mortal enemy and he who has pursued me untill he thinks he has ruined me. I mean Samuel McKean. The next offensive thing I did was to support the national convention to nominate officers candidates for the office of President, and vice President of the U.S. The next was, open detestation, and ridiculing his letters, relative to yourself, and the last my opposition to him as a candidate for the Senate of the U.S. For these and these reasons alone, for I know of no others, am I removed from my office, with five days notice, thrown uppon the cold charity of the world, with a wife and three small children to support. And who takes my place. Is it a friend of the National Administration; not at all. It is a ^man^ that has done as much or more, to abuse the political, and moral character of Genl. Jackson, than any other person in Pennsylvania, and is still an open enemy of the President. Charles Mowry former editor of the Penna. Intelligencer, (the paper I send you) and Harrisburg Gazette, is the man. I can produce his files which will show more abusive articles relative to Genl. Jackson and his Administration than were published in any other clay Journal in Penna. Besides while you were in England, Samuel D Ingham spent some time in Washington. It was in the winter, during his stay there, he wrote weekly to Charles Mowry, over the signature of a “Looker on” These letters can now be produced. I believe I can get most of the manuscripts, more abusive, filthy, dirty trash, never came from the mouth of a man. They related pretty much to the breaking up of the cabinet, Mrs. Eaton, and your self. I can prove to the satisfaction of the President that these letters came from Ingham. Mr. Mowry edited the Intelligencer untill he became so poor, that his creditors took it from him. In October last it was thought necessary by some of the clay men attached to the state Administration to Establish a Clay paper, to oppose Ritner, and Jackson, and support Geo. Wolf. Money was raised and every member of the administration subscribed, to establish the Harrisburg Gazette, and Charles Mowry again became an Editor. He pursued his old course, <unjustly> <abused> the National Administration, and supported Govr. Wolf. <illegible> <illegible> support of your friends Gov. Wolf was elected, and <lastly> the Mowry paper was not discontinued. The presidential campaign not being over Article, <illegible> after article, was written to break down Genl. Jackson and the administration of George Wolf supporting the paper. The Election over, and the good old man having a majority of 25,000 in Penna. put a damper on the spirits of the Gazett, and it died also. Every line that I have written I can prove by numbers of the citizens of Harrisburg to be facts. I am sorry I have had to trouble you, but I felt it my duty to do so. I have been removed from office because I would not bow the knee to Saml. McKean and abuse you. McKean is doing all he can to form a party for John McLean, but it will not do. Penna.never will support him. If uppon enquiry you find out what I have said to be true, and enquiry I hope will be made, I hope trust that some place may be given me by the President, that will enable me to support my family, and show Saml. McKean, that although he has crushed me, yet not Killed me. Gov. Wolf has a Son in the Treasury department. He was placed there by Ingham, and I believe was one of Mr. Inghams body guard at Washington. Depressed and low spirited spirit you will on this account excuse the appearance of my letter

With great respect I remain your sincere friend

I have <illegible> ^<illegible>^ one of Mowrys papers. It is one of the most decent you will <see> his name at the head of it. In fact this man who is <now> <illegible> into the Wolf Jackson Administration has gone so far <as> <to> call the President a vile <empty> man and Mrs. Eaton <illegible> I have forwarded [this] letter this letter and papers to the care of Honbl. Silas Wright, and requested him without [. . .]ing any thing further to forward them to you. 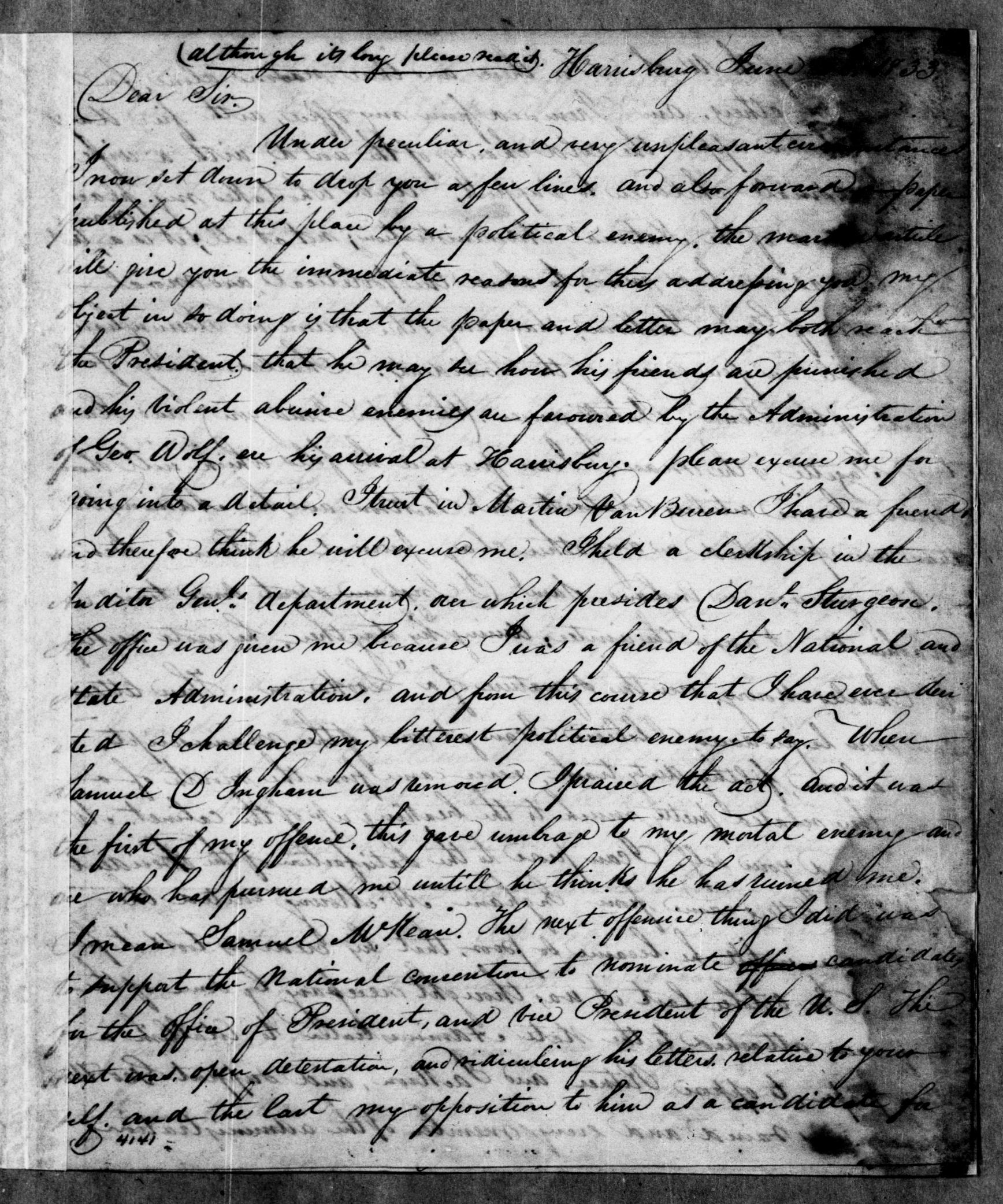 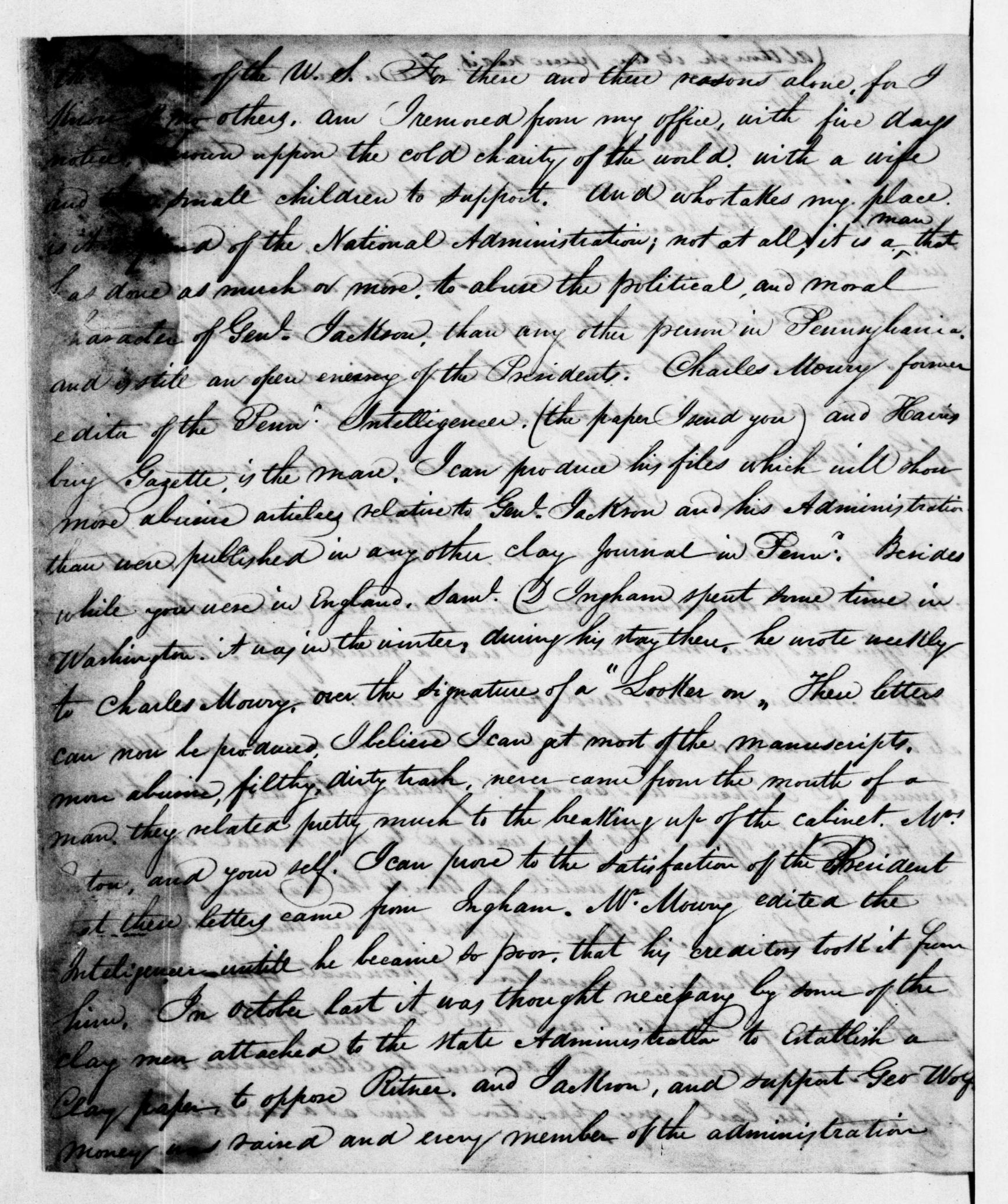 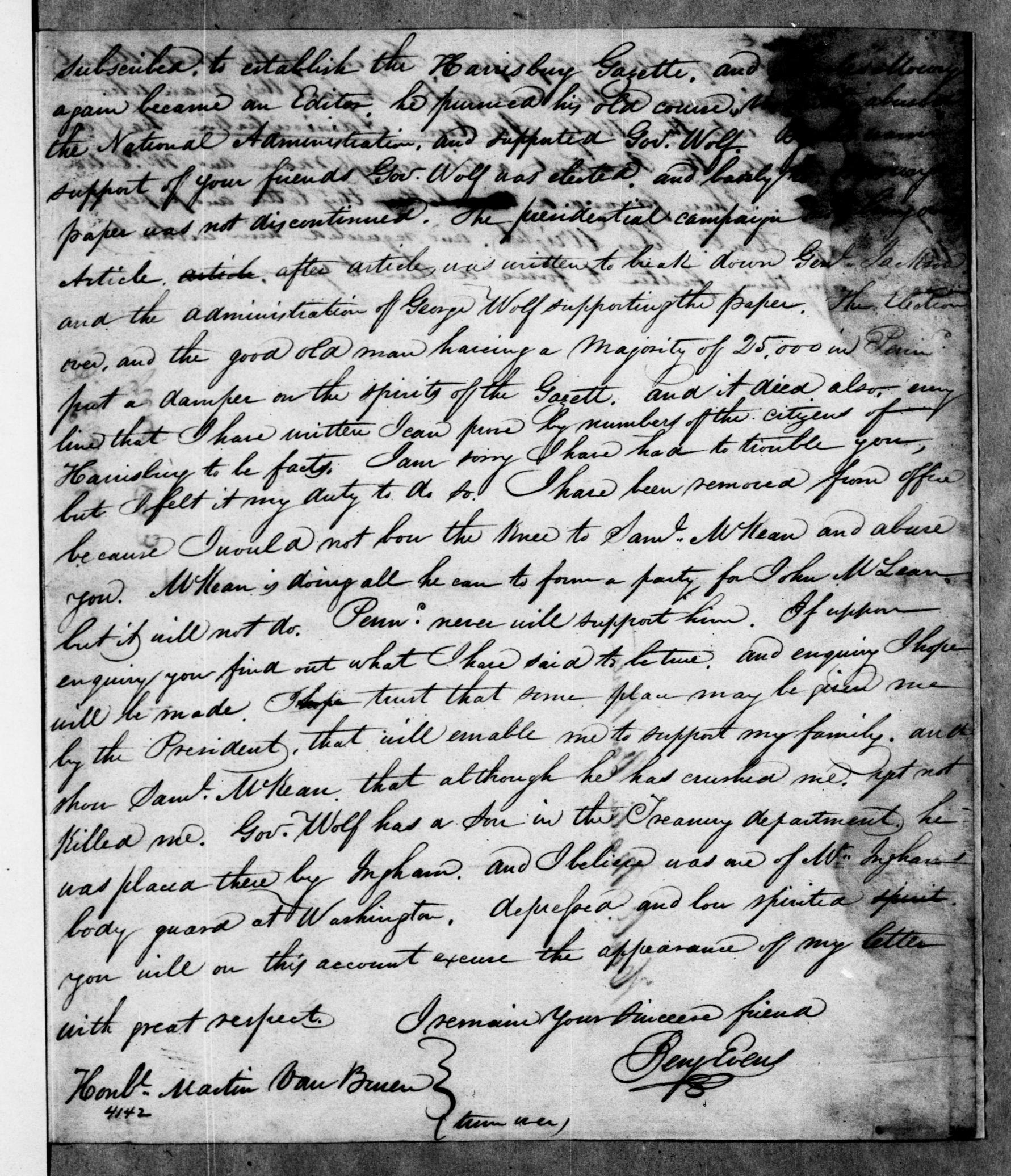 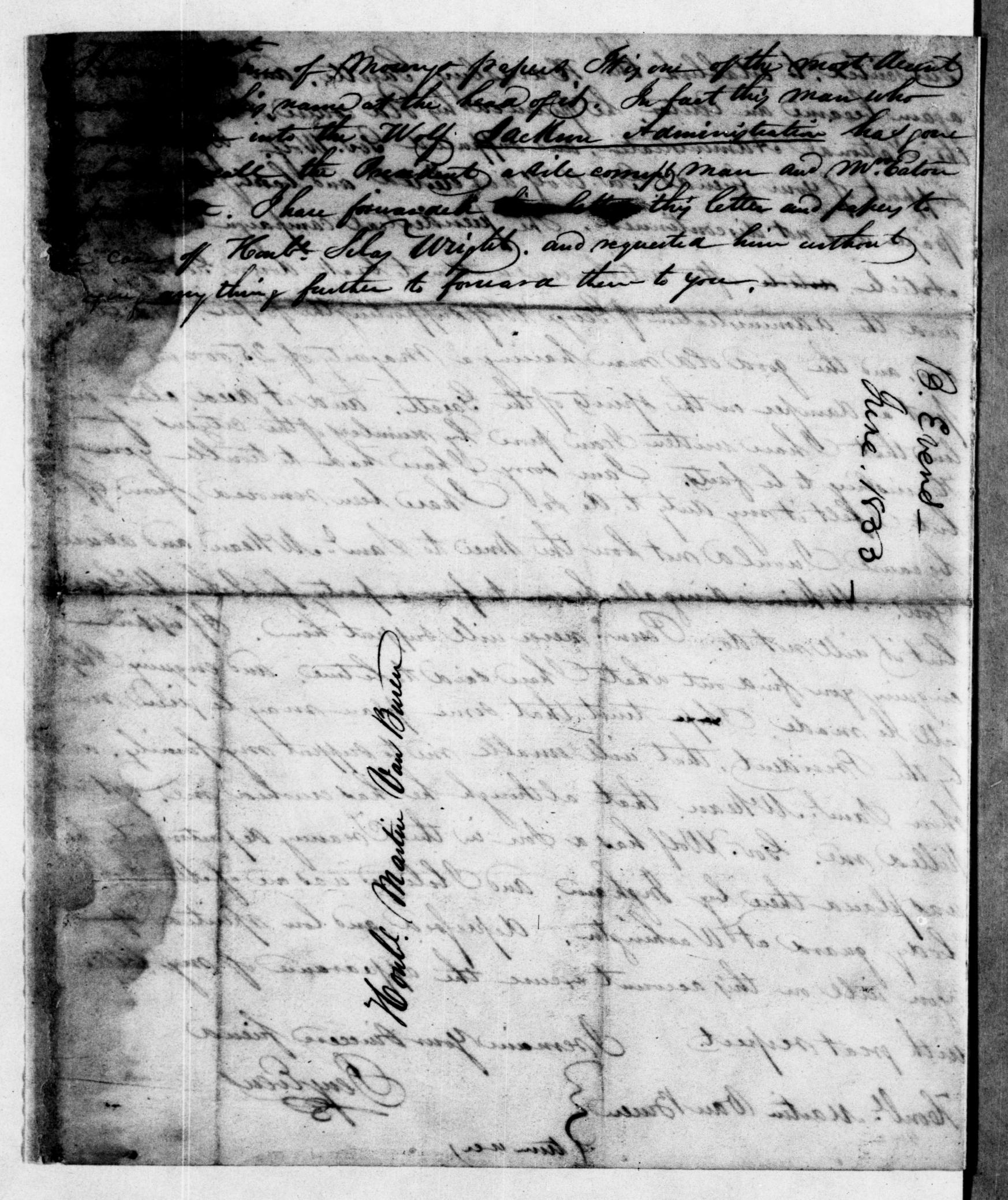