At a meeting held in this town on the 19th of April  ultimo, of persons favorable to the adoption in this state of the Massachusetts mode of Suffrage, the subscribers were appointed a prudential Committee with an understanding that they should report their proceedings ^progress^ at subsequent meetings. This primary meeting was held accidentally on the anniversary of the battle of Lexington. This we consider a good omen. For many years the proposed plan has been much on the minds of some of the committee, but whenever proposed, some objection or other has always been interposed by the timid and the interested. For 4 or 5 years past, the election of Jackson to the Presidincy has been urged by the majority in this state as an insurmountable objection against General Suffrage, from the well known fact that he was emphatically the choice of the democracy, or common people: and from the pretended or real fears that he would use his military prowess to subjugate the liberties of the people, and build a despotism on the ruins. Now although the committee consist of all the parties now existing in the state, yet they all agree that [wh]atever differences ^of opinion^ may now exist in the state as to other ^minor^ political questions, yet that these pretended or real fears have been completely annihilated, and that those who formerly urged them to defeat our enterprize must acknowledge one of two things: either that the democracy of the country decided correctly ^safely^ in choosing the present Chief Magistrate, or that having decided <illegible> ^unsafely^, the purity and strength of our glorious Constitution is sufficient to regulate any temporary error which the system of General Suffrage may occasion. Soon after our appointment our former opposers not having the effrontery to urge their exploded objection must needs create new ones. The first was that “in Massachusetts the best portion of her citizens regret <illegible> the extension of Suffrage in that state and would willingly adopt the R. Island mode were it practicable for them do to do so” We immediately addressed letters to Hon. Francis Baylies, Hon. John Q. Adams & Hon Danl Webster to ascertain from such high authority if these things were so. The letters The answers of Messrs. Baylies and Adams have been published pretty generally in the newspapers. From Mr. Webster, we have received no answer. Having so completely proved this first ^new^ coinage of our opponents to be a counterfeit, we were in hopes that we might go on with our contemplated improvement undisturbed. But our hopes were vain, for their mint has issued another objection, in this shape:- “If General Suffrage is allowed in this state, it will be the same as it is in N. York; where vessels load of foreigners land & go immediately to the polls & vote away the liberties and monies of American born citizens”. Now if it would not be infringing on your valuable time, nor the dignity of your high office, to answer the subscribers would take it as a great favor, to receive as soon as convenient, answers to the following questions: 1^st^ What are the laws, and the practical construction of the laws, in N. York concerning the right of Suffrage! 2^d^ Do you consider that there is any evil arising, either from the present law or practice in N. York, so great as that ^one^ would be, of sacrificing the Democratic principle of General Suffrage, to the any notion of expediency, arising from a fear that some are now admitted to vote, who are not capable of exercising that high privilege? And lastly, have you any doubt, of the perfect safety of trusting the aggregate ^virtue & intelligence^ of the people of N. York under Your present election laws, to choose the officers of the State? As these questions relate solely to the affairs of the State of N. York, we can see no impropriety in a distinguished native born citizen answering them, but if our humble opinion ^on this last point^ are overruled by those who certainly have a better opportunity [and a] better right, to judge, the only part we can [act i]s to subm[i]t without a murmer.

A slightly different version was printed in Albany (N.Y.) Argus, 30 July 1833. [Bracketed words] in the above transcription taken from this newspaper. 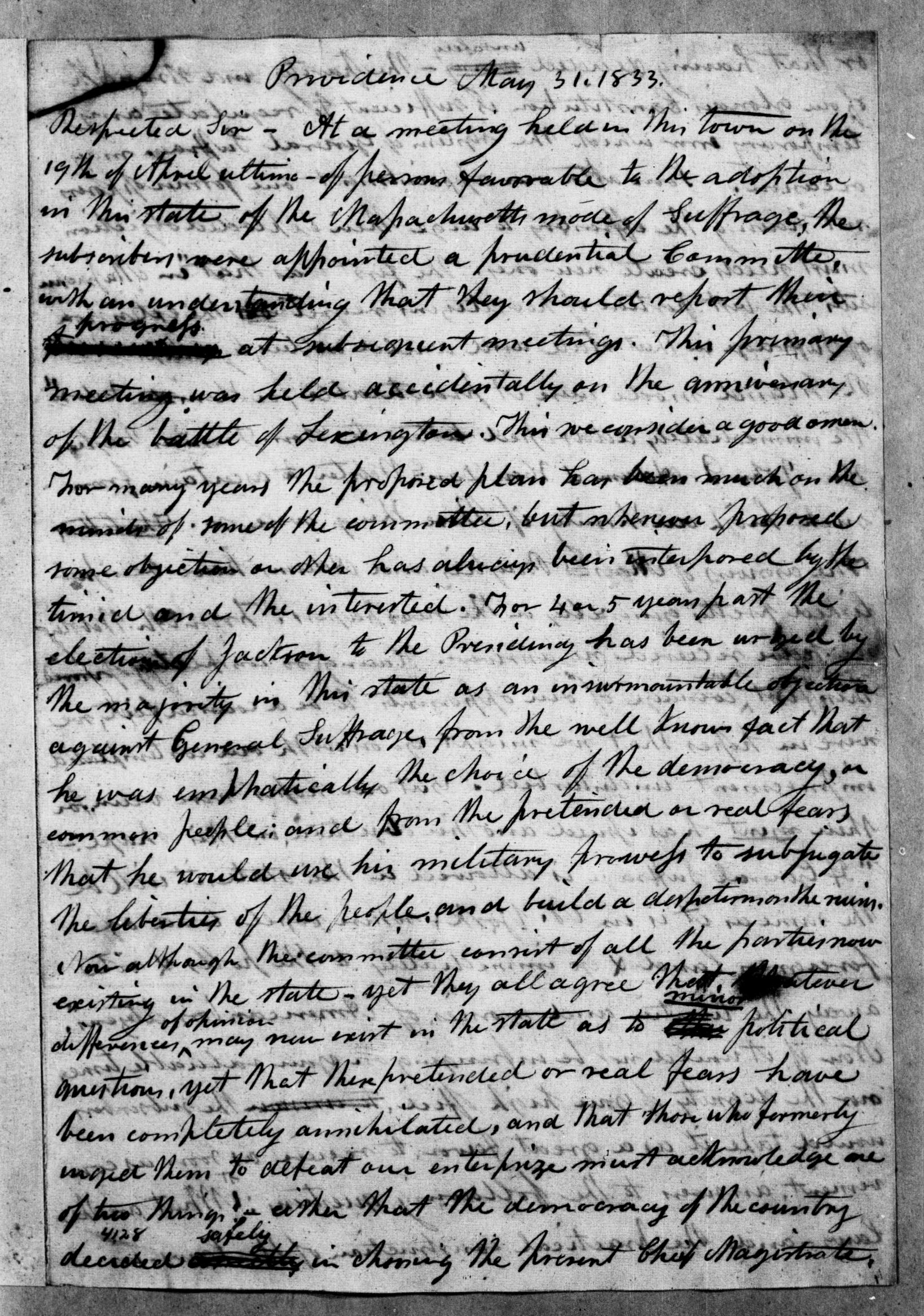 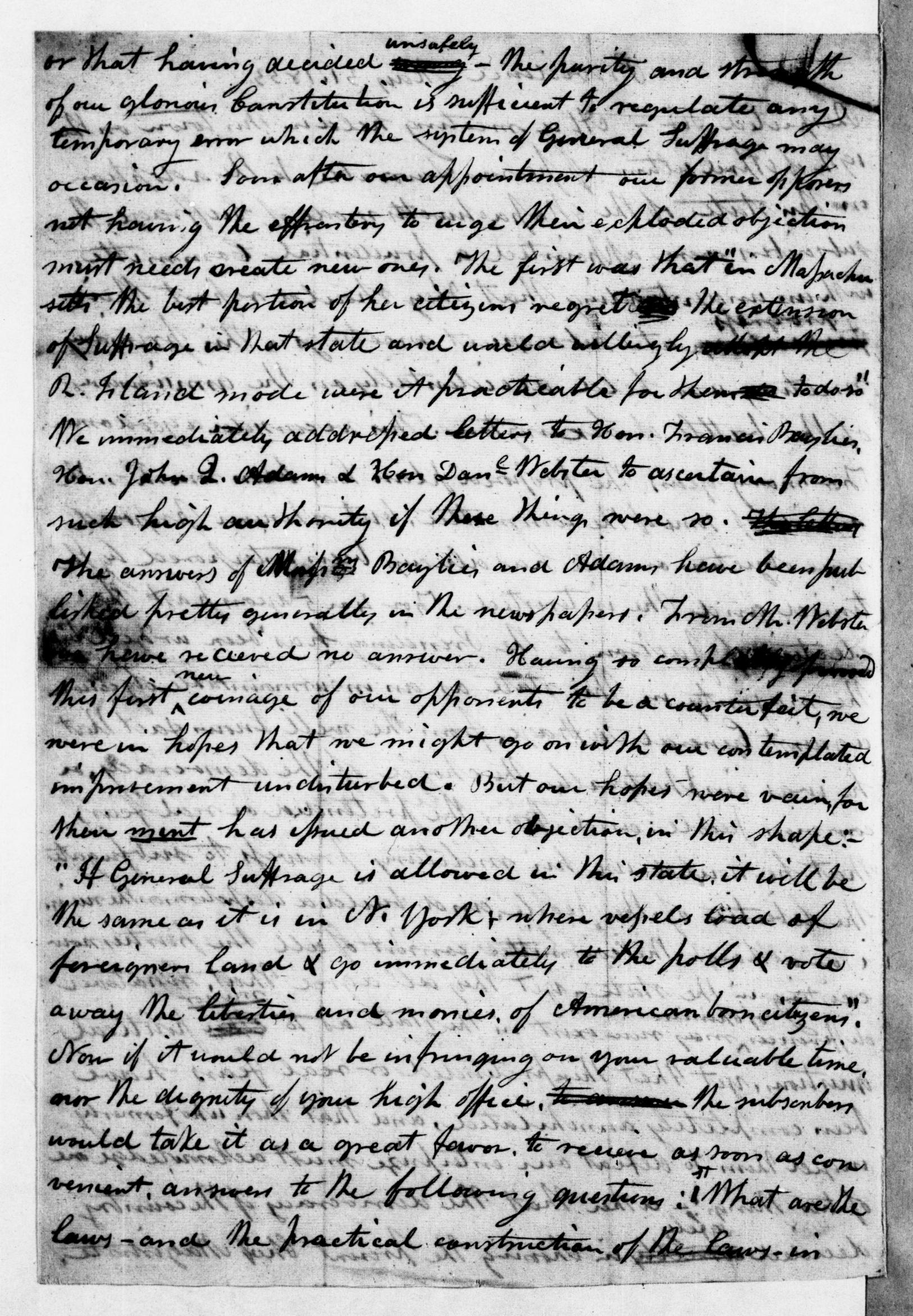 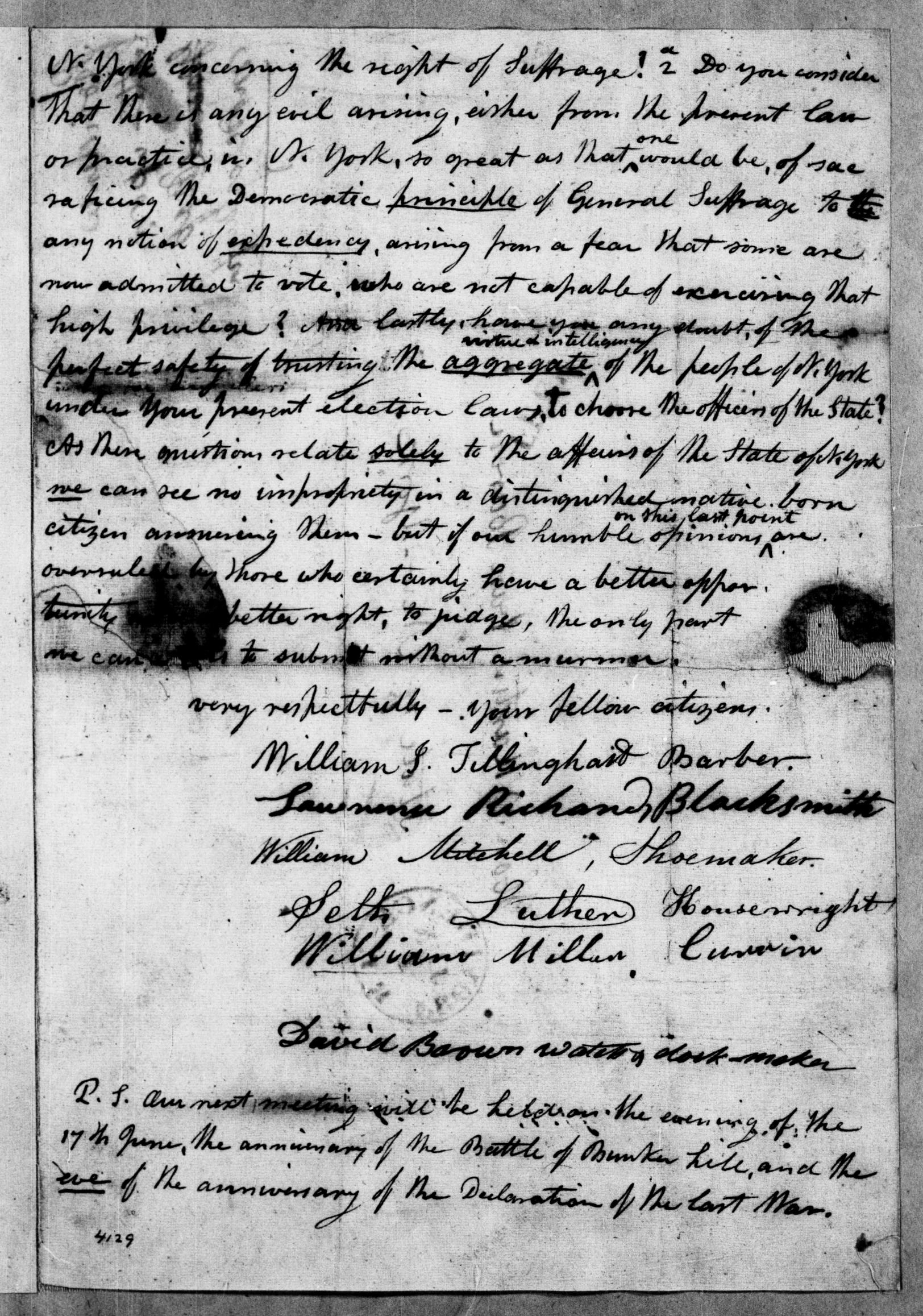 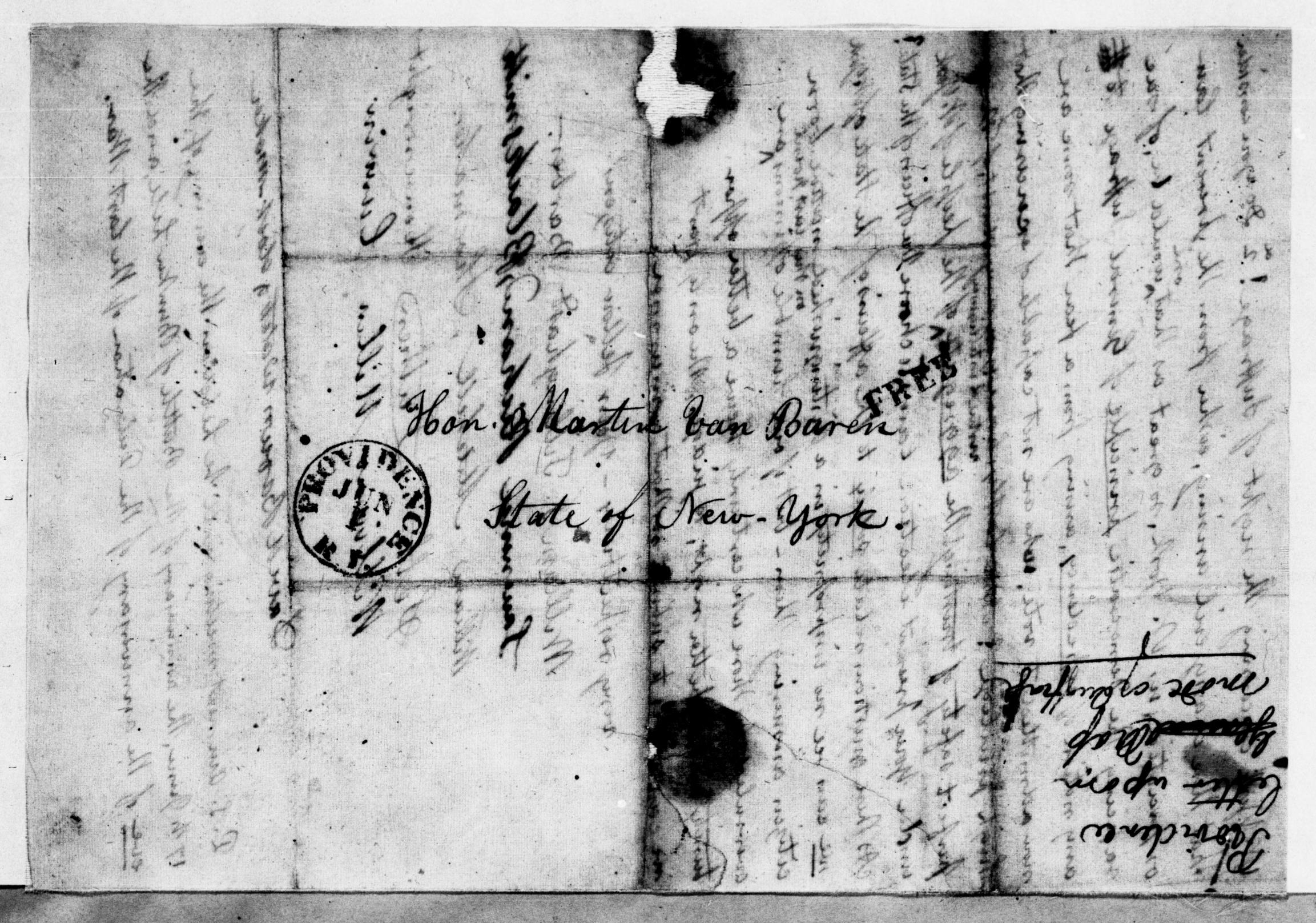