Yours of the 16th. instant has just reached me. I am still much afflicted with pain in my side shoulder & breast, which has removed higher in my breast. I have postponed answering the various committees of Newyork, Boston, Philadelphia &c. &c until I could form some positive idea as to my ability to perform the trip, intending under probable hopes of being able to proceed, that I would announce in my replies, that I would set out, if not the first, early in june next. This is my intention and I will determine in a day or two. I will proceed on the intended journey, if my strength promise to hold me out in performing part of it, and I do hope, my fellow citizens will let me pass with as little pomp, & parade as possible.

I have seen Doctor Southerland, he & Doctor <Burden> has been here on a visit, what speculation not known, unless the Potomac <bridge>.

The outrage attempted by that dastard Randolph, & his associates in the conspiracy, upon my person, receives but few advocates except the Fredericksburgh Arena. The Richmond Whig, the Intelligencer, & Duff Greens, but surely the attitude taken by the judiciary of Virginia, "that there is no law to arrest a fugitive from justice," is a disgrace to the old Dominion, and well calculated to disgrace our institutions abroad, and will compel us here, to go armed, for our personal defence, and may lead to, what I would sincerely regret, & which never shall happen whilst I am in office, a military guard around the president. The only safety, now, for the officers of Government ^here^ is to ^be^ prepared & shoot down, or otherways destroy those dastardly assasins whenever they approach us. Should I ever meet this dastard, my enemies may tell, & boast, of the sequel. The grand jury I am told are investigating the conspiracy, & Mr Key thinks, will be able to now unfold it. I have no doubt but Duff Green was knowing to it, more of this when we meet.

You have enclosed me only one letter, (you say two) and that is Mr Edwards dated Hartford connecticut, and which has no relation to the subject of Haywoord, or Govr Cass, therefore, I infer that you have not enclosed them.

The Globe, I suppose, will let the Subject of Randolphs default, & robbery of the dead, pass for the present, but the Subject of the committee of Fredericksburgh inviting Duff Green, ^”as a distinguished <gest>,”^ & as Duff say, intended to invite Randolph, will be followed up, until the Committee either denies the insult intended me, or explains this matter. Duff Green intended ^as I now believe^ to draw from me an invitation to the national Cadets as my life guard to Fredericksburgh. I knew nothing of them, the Capt. addressed a polite note tendering his, & companies service as my guard, which was politely refused, saying if they went to the ceremony it must be on the invitation of the committee, or their own free will. Since my return I find that the Capt. is Duff Greens, foreman, and one third the men in his service, & the Ballance of such materials, & it is evident that it was intended to have these spirits# present to witness the outrage as my body guard, and in it, and swear for Duff & his party as occasion might require, for we know, that fight, few of them will. We will ere long cleans the stable of some of those who have lately been smuggled into office, as well as those who are too old, to perform the duty.

I have just seen the Major (yr son) he is in good health. My Whole Household unite with me in kind Salutations to you.

Located below MVB's signature: #This company was on board the boat selected for my convenience. Duff had went on before. 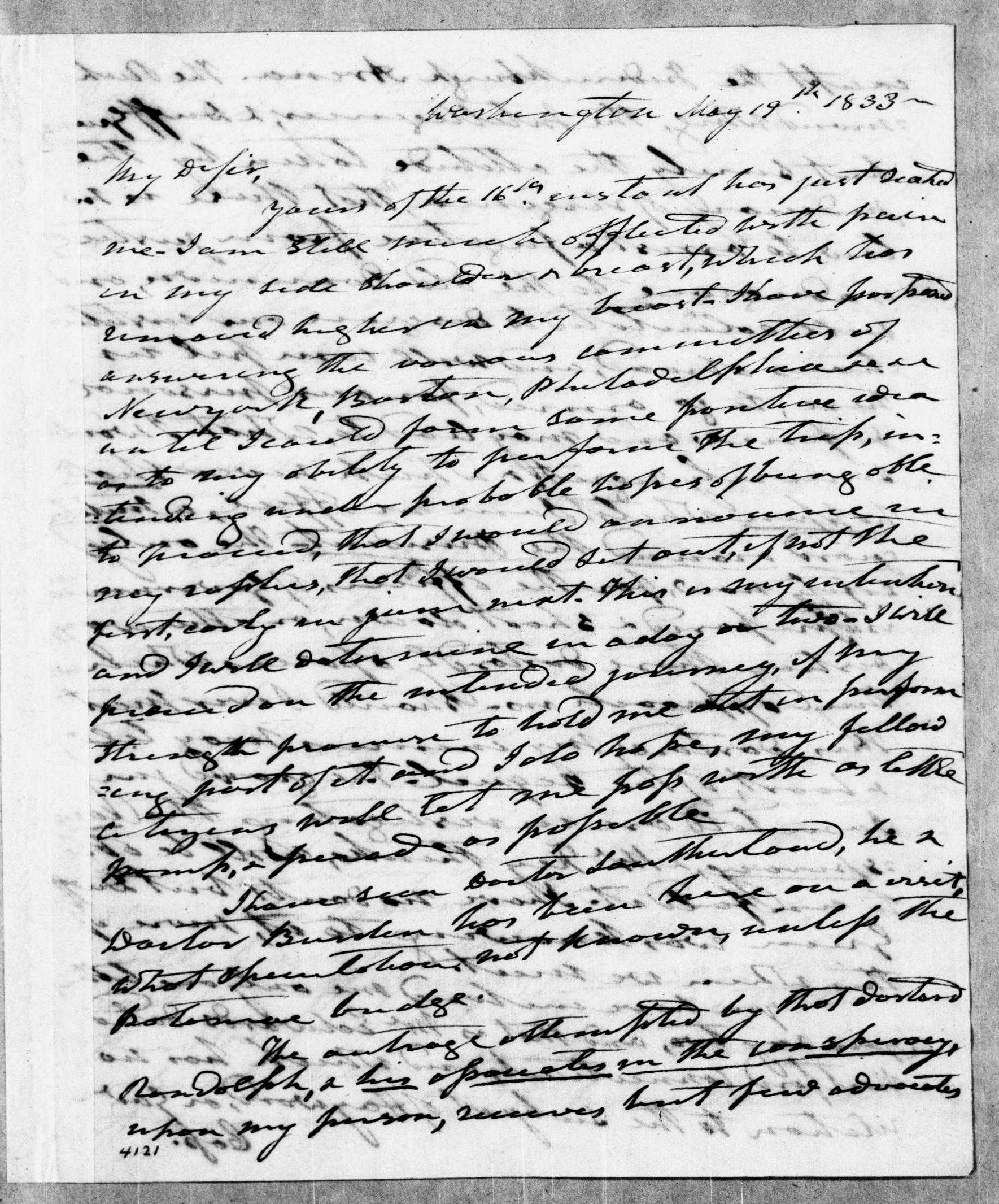 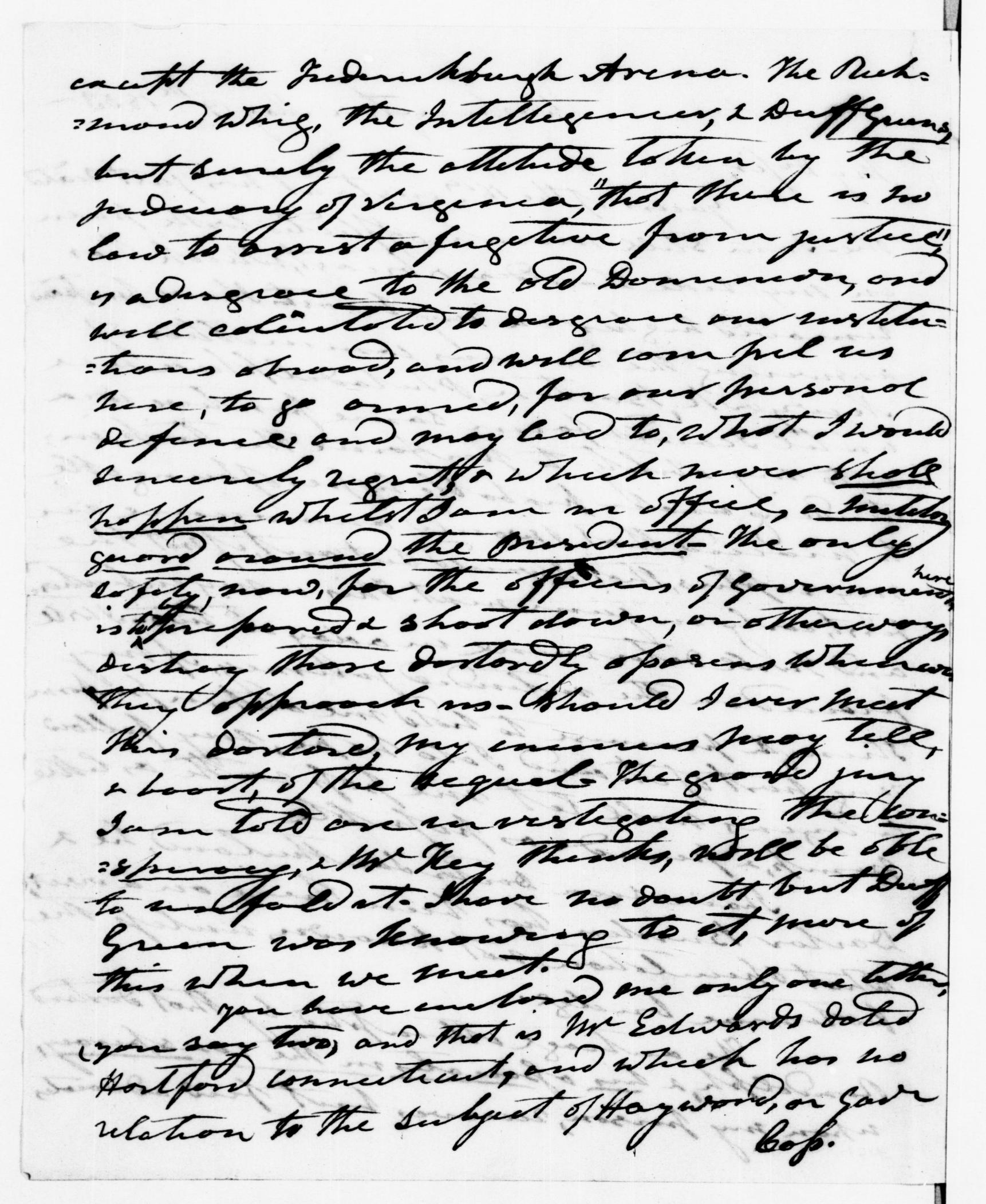 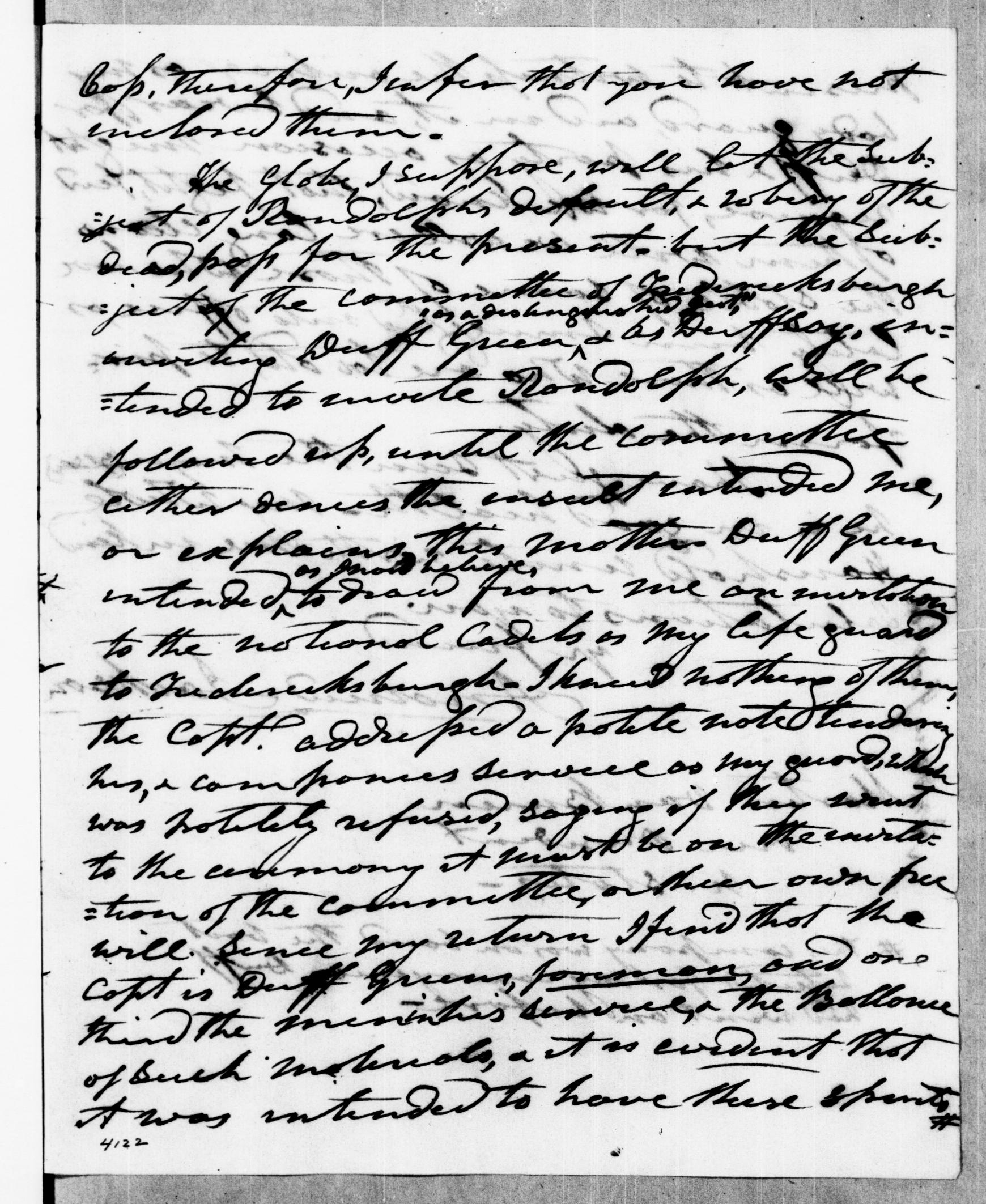 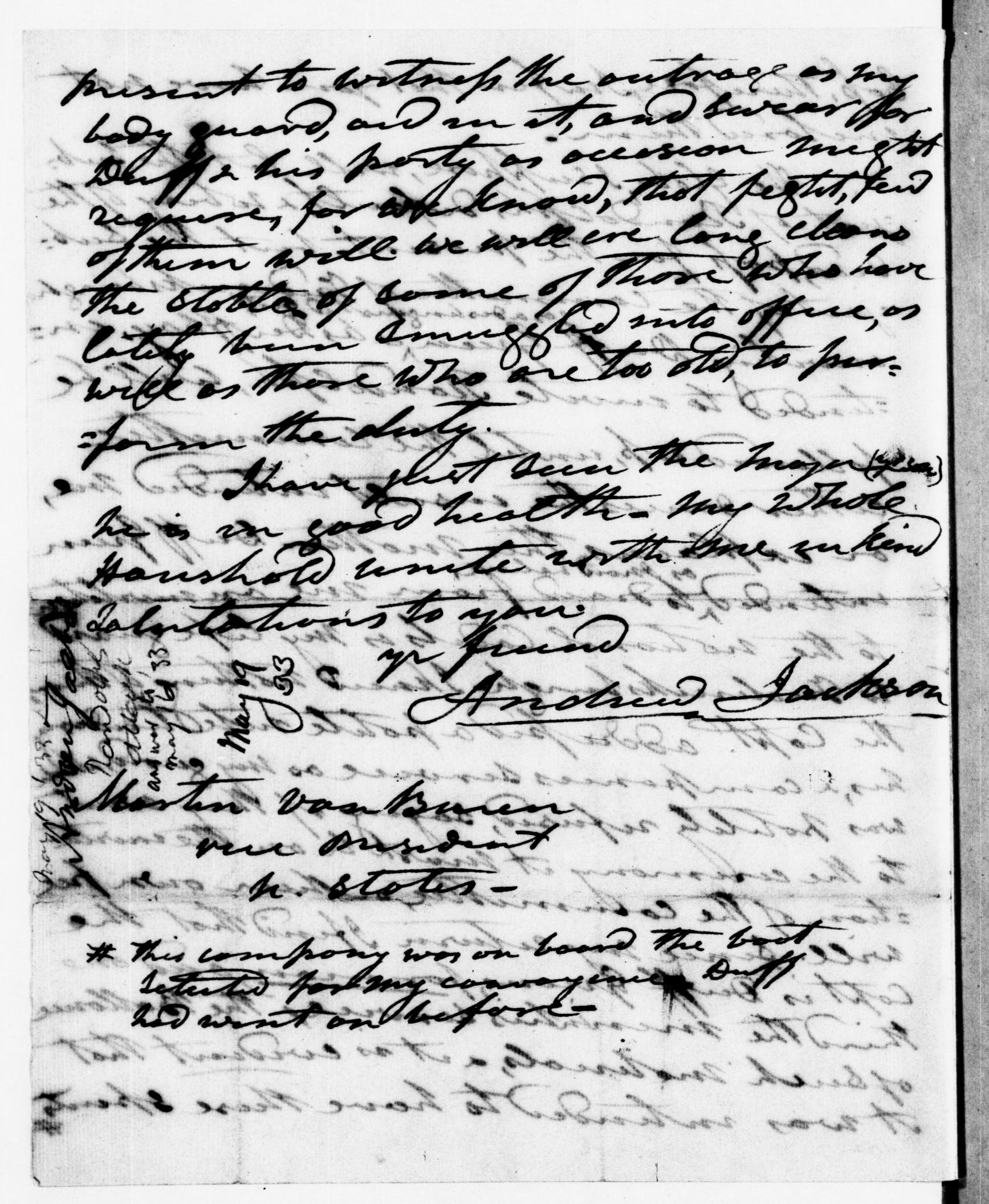 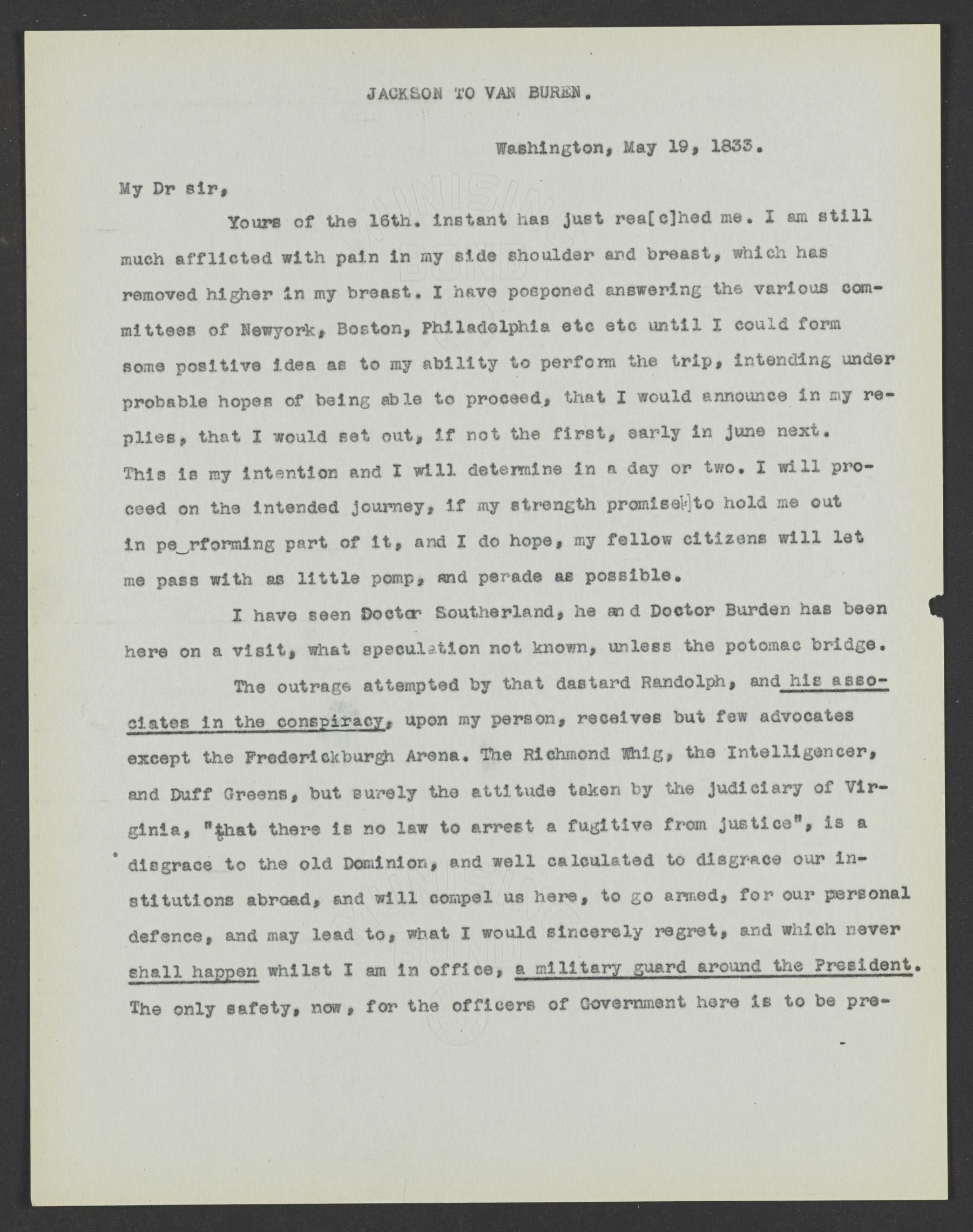 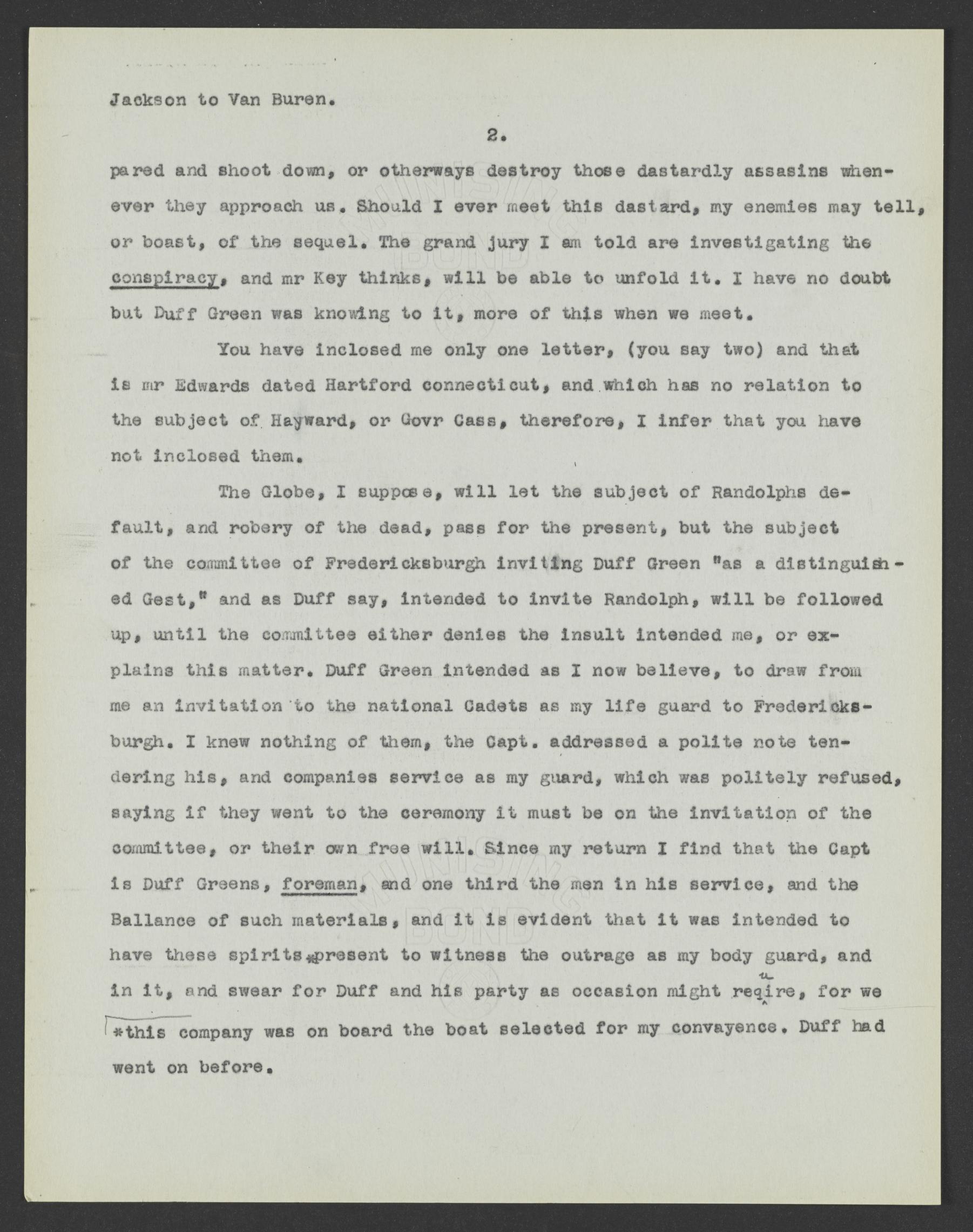 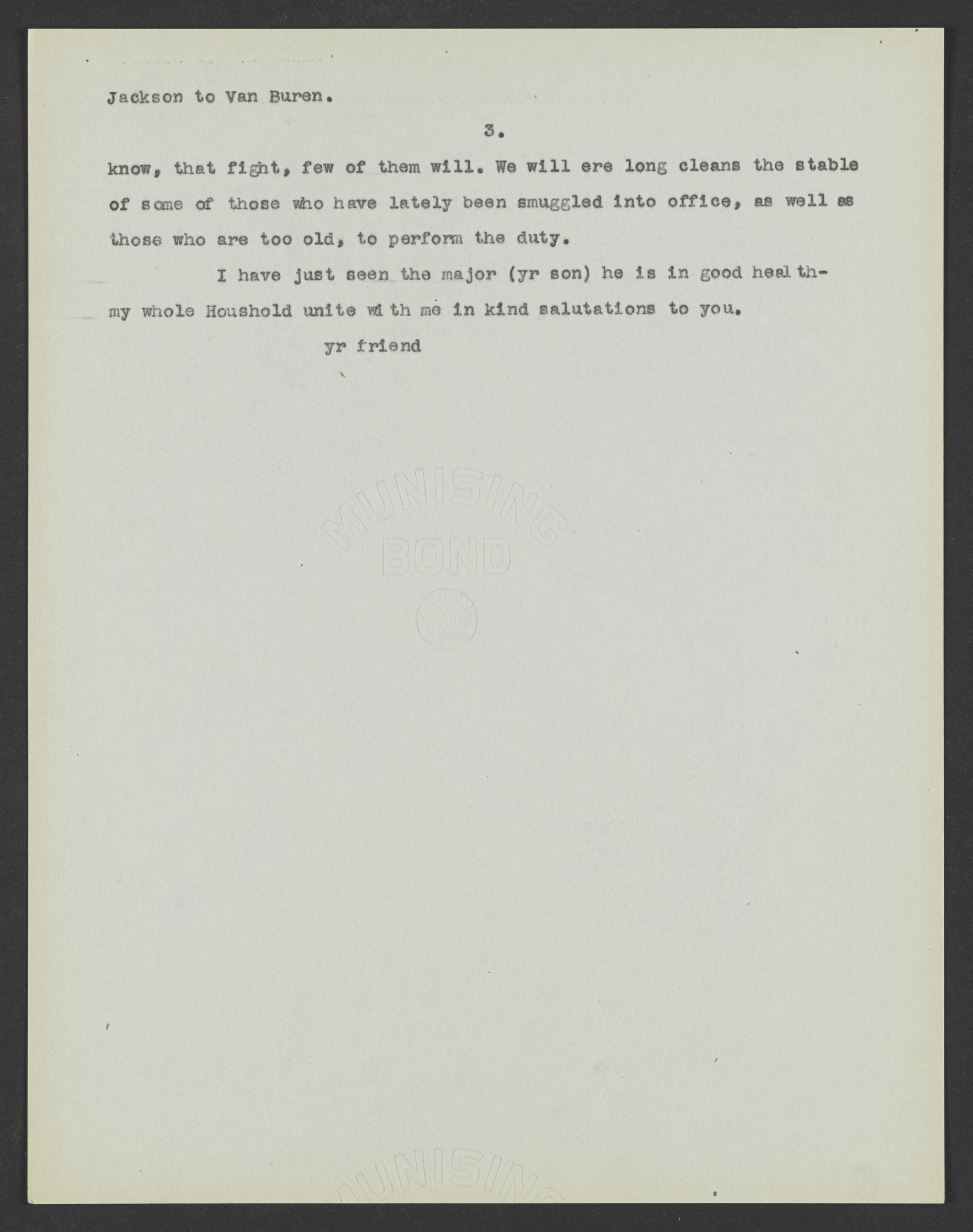