North Carolina has been long distracted by a sectional party feeling which has grown up under the unequal operation of her government. My residence is in that section which has always favored the existing state of things. Against my wishes & but a few days before the Election in 1831, I was nominated as one of the representatives of this County to our State Legislature ^& returned by large majority^ but a regard for principle obliged me to decline a further service in that station for reasons which you will find stated (if you have time to read it) in the enclosed circular. I have ^no^ reason to regret my course so far. Last year a new plan was suggested for heeling our differences & I was honoured by being placed at the head of a Committee to address the people of this State on the subject of a change in our Constitution. The Constitution is silent as to the mode of change & it was intended that it might be done by a direct vote of the people authorized to be taken by act of Assembly. I inclined to believe that this mode was regular & free of valid objection, that indeed without a legislative enactment the majority of the People had a right to reform the Government, but that this latter step could only be justified in extreme cases & was dangerous to liberty if generally acted on, and a principle is to be tested only ^always^ by looking at it as a general rule I confess however that I was embarrassed by the want of political experience and as I know no men in our country whose judgment was so conclusive with me as yours I took the liberty of writing you. Other men of high virtue & exalted character I knew & honoured but their politics did ^do^ not combine Democracy enough to claim my homage. I wrote only for light to guide my own private judgment, without any design to communicate your letter or its subject even to my associates—, and I shall act upon this assurance and treat your letter as confidential. It occurred to me that an interference on your part would be deemed improper in the question & might affect your popularity in No Caro and I need not assure you that I can ^ought^ never be looked on as one who will desire to abate one tittle of the high claim which your character & services give you upon the favor & confidence of No Carolina. It is due to you however now that I should state that your letter reached here while there was a high excitement in this City about the contemplated removal of our Post Master and the jealous eye of party spirit has detected some deep design in these <parts>—“Your frank is seen in my box.“ “Your letter is addressed to the Known author of the political address by which your character was defended in North Caro. previous to the last presidential & V Presidential election.“ This is all, & enough it is to justify with foolish partizans a most gross & wanton charge against you and me I see that hints are making about it in the papers. Juntos are spoken of. Correspondents at Raleigh are talked of, &c &c. Under such circumstances I shall be gratified if you will allow me to use my own discretion for your defence & without exposing you to the imputation of interference in our politics I may be able to expose these shameless calumniators & tho: it may not correct them it will save the people from deception. Without such permission I will suffer martydom before your letters shall be seen or ^contents^ known of. The P. Master is a good & honourable man, the best Post Master I ever knew & I would cheerfully show your letter to him (by your leave) and make him sign a certificate that it was shown & that it did not concern him or his office or any other office &c, which might hereafter be of use. I know that a move is contemplated here next winter to form an opposition to you for which the publick mind is to be prepared by rousing the publick ^peoples^ suspicion of a New York junto in N. C. the nucleus of which is to be at Raleigh. Doubtless strenuous efforts will be put forth to do their work and your former experience will convince you that the work of a detraction <illegible> ^may^ find its hirelings even in N. Carolina. A prudent foresight sometimes enables one to confound the managers of plots by allowing them to indulge their delusions while you ^we^ are in possession of the means of defeat undermining the basis of their perverted arguments.

I have been thus full in my statements that you might know the motives I had in writing you & at the same time obtain possession of the purpose, the only purpose I have in asking to be allowed my discretion about the use of your letter. I am not a politician by trade, but every good man feels some interest in his country & its governement in these times & a bare sense of justice is enough to make one anxious to defeat the operations of the unpardonable slanders.

I find I am getting quite out of my vocation & this letter which was intended for no more than a return of my thanks for your polite attention to me is likely to be too long & quite a string of political gossip. Pardon me for it. Accept my thanks for your letter and a renewal of my apology for the trespass I have committed on the time of one whom I know to be so busily engaged as you are.

I write you in haste, in the midst of professional engagements & I would have done so earlier but your letter laid in the office 3 weeks in consequence of my absence from home.

With very high regard I am your friend

P.S. It is hardly necessary for me to add that this letter is a confidential one, since it is a reply to one of that character 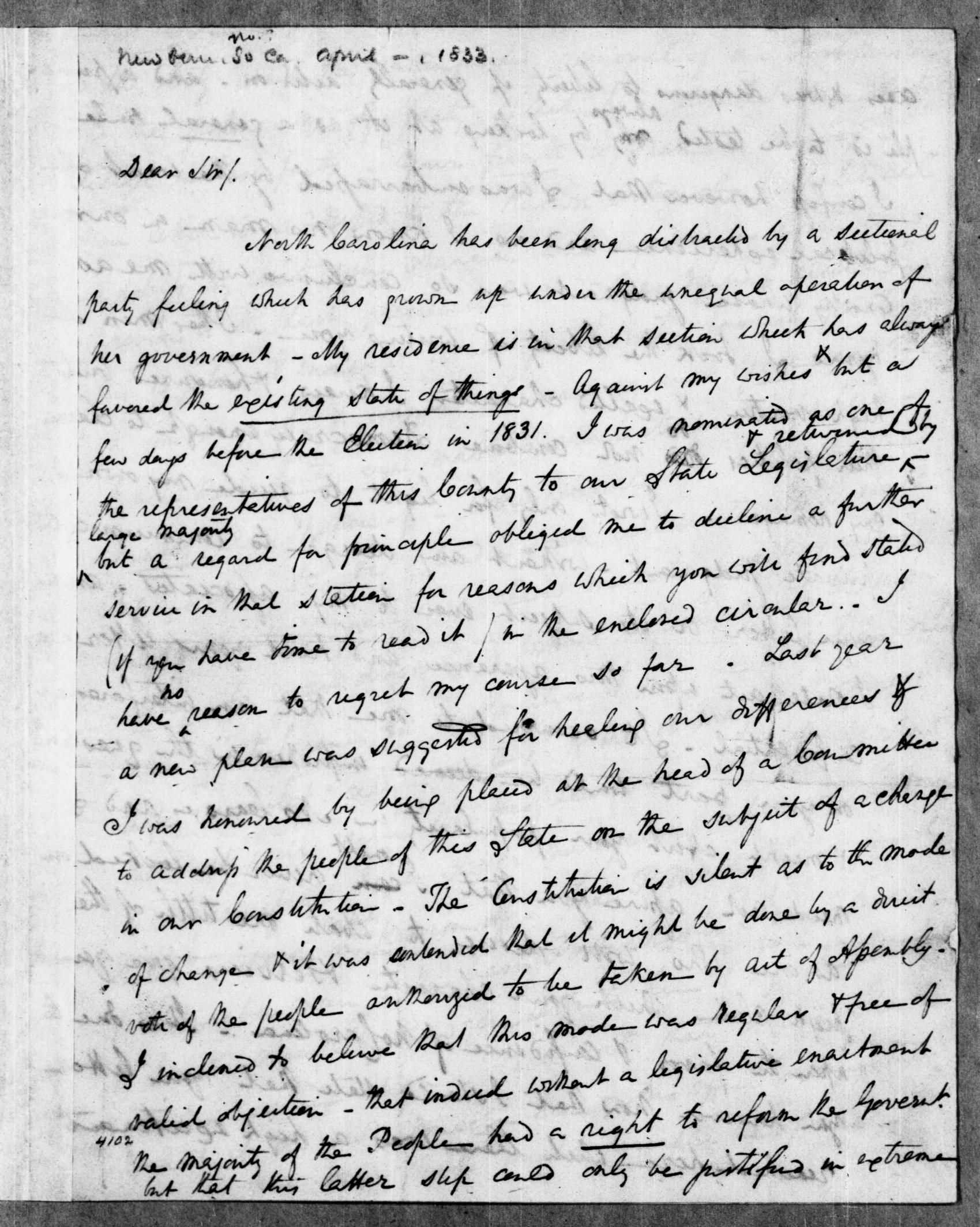 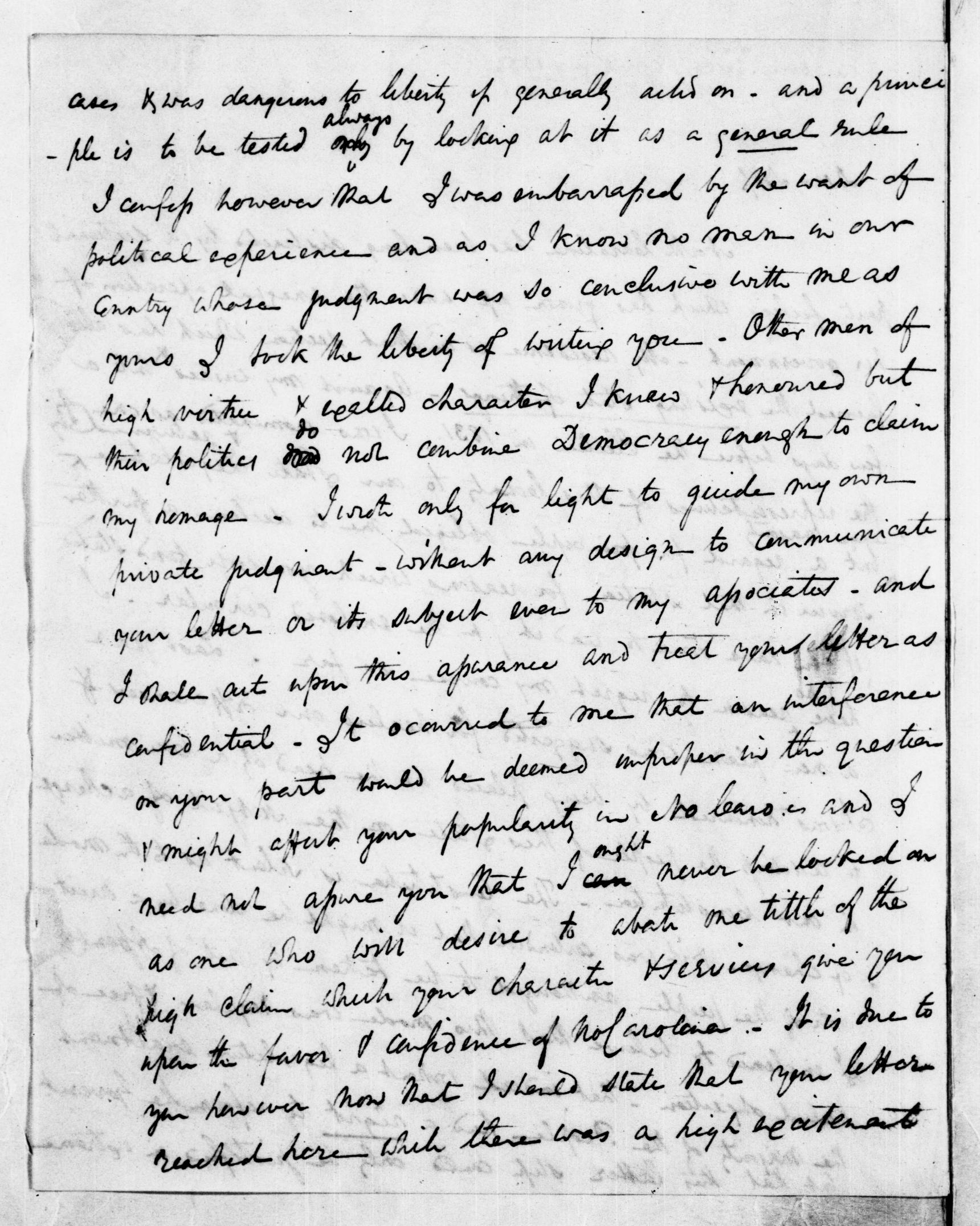 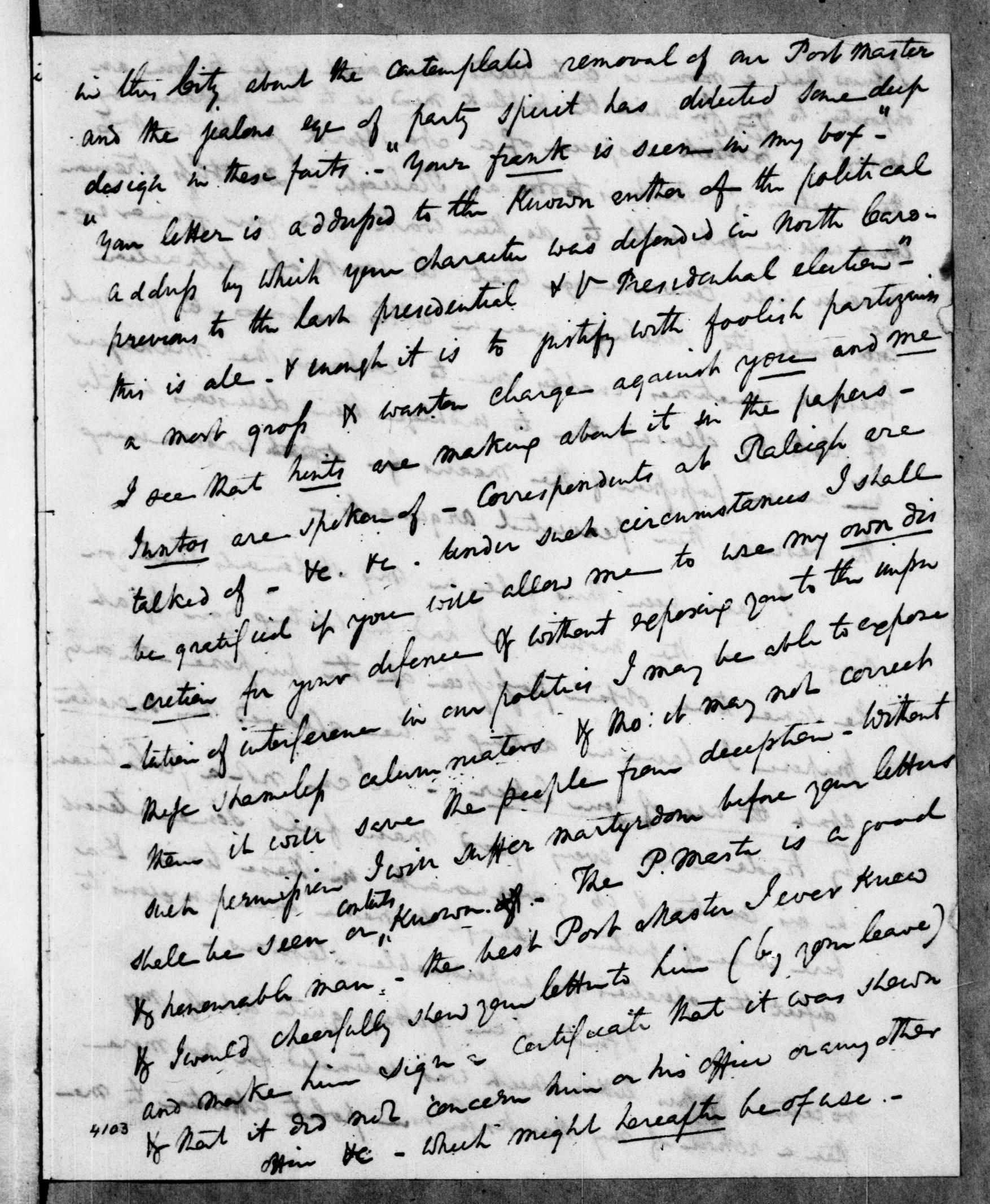 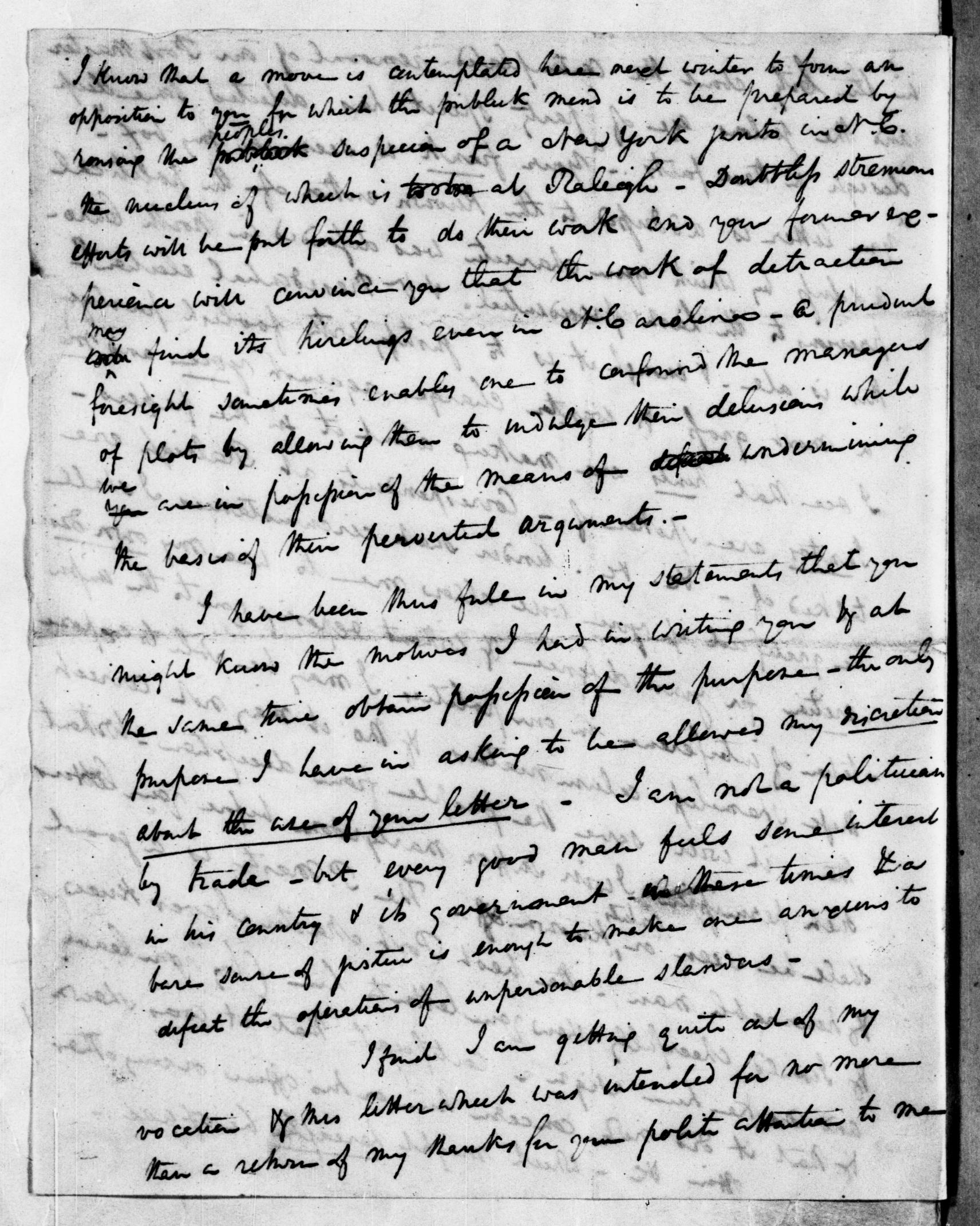 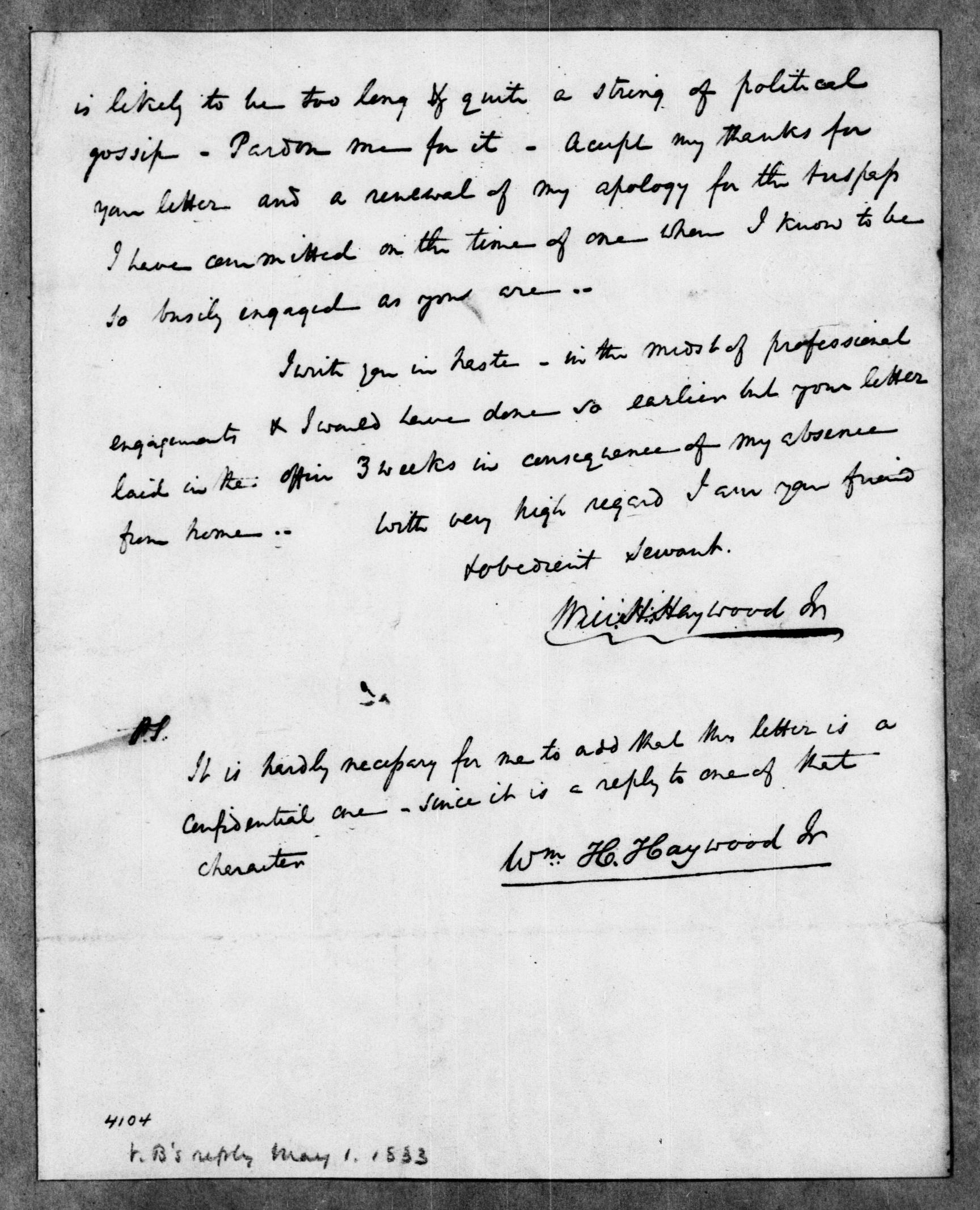 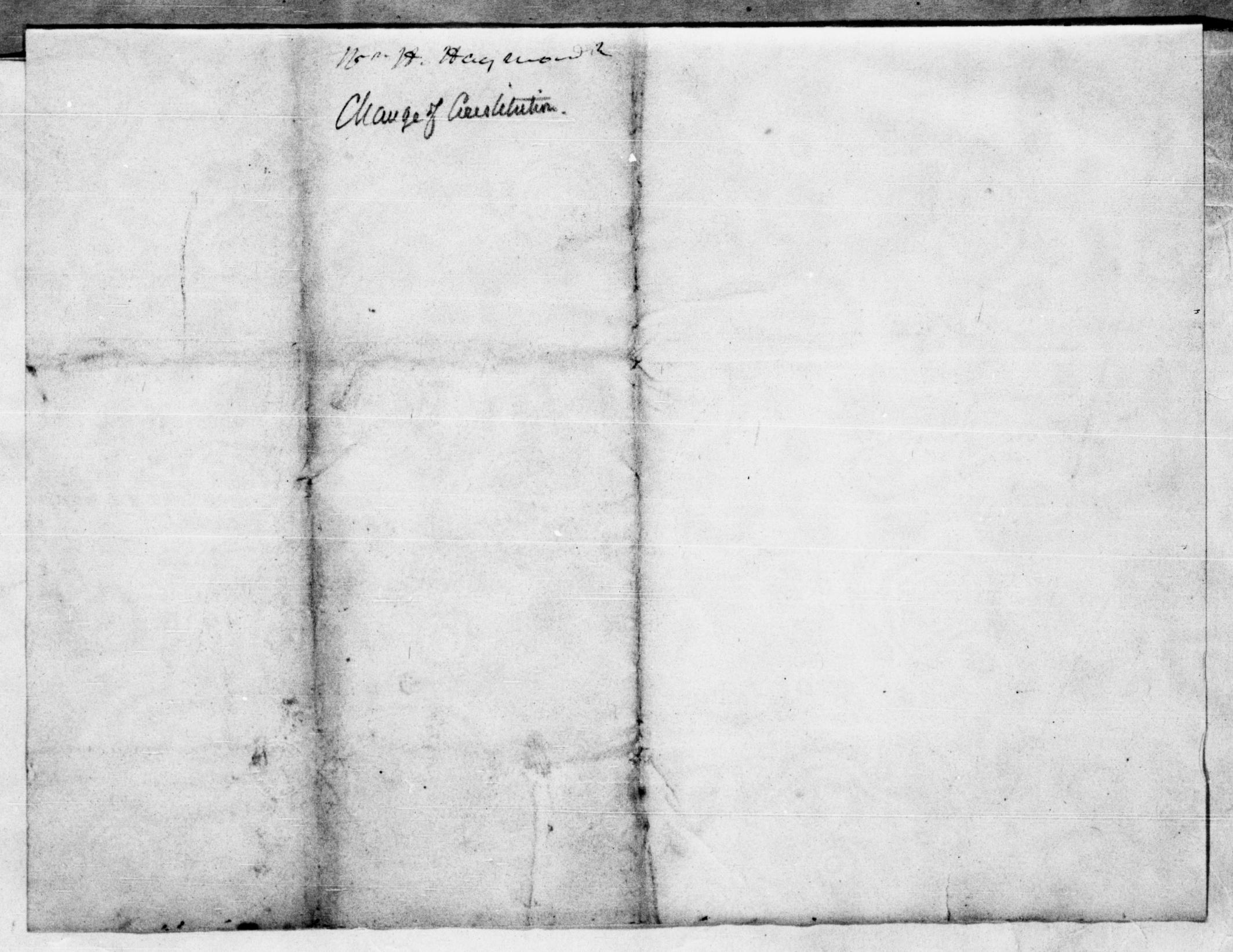