During my official examination of the Banks in New York the last week I found much sensibility existing on the subject of and apprehended removal of the public deposits from the United States Bank, & particularly in regard to the selection which in that <event> the government might make among the local banks.

You are undoubtedly aware that of the large institutions in the city the manhattan is the only one which is not subject to those restrictions which have now become the settled policy of the State in regard to Banks. It therefore enjoys an exemption from those burthens which it was thought wise to impose upon the other institutions for the public safety, & which experience has shewn to be highly salutary. The more I see of the operation of the system, the stronger is my conviction that it will answer all the beneficial purposes intended, & I have no hesitation in saying that with the aid of the government patronage the local banks in New York will at all times be able to sustain the currency of the country as well as that portion of mercantile <credits> which shall be <sound> at bottom.

There are the Bank of America & the Mechanics Bank with capitals of two million each, the merchants with one & an half & several others of about a million. These capitals are all known to be unimpaired & invested with all the safety that individual credit can afford. Their affairs are often & <eminently> examined & their condition from time to time made public. They are managed by men who to say the least are <either> inferior in point of character or talent to any other bankers in the Union.

If the funds of the government are therefore to be placed in any of the local institutions I should hope they might be preferred to the manhattan Bank the stock of which is principally or a large share of it, <owned> in Europe, & of the internal condition or management of which nothing is or can be known, except through its public & open operations. It has never as yet I believe published any thing like a statement of its concerns. Still it is undoubtedly a safe & well managed institution but I think not as well entitled to the patronage of the government as others who can offer as good if not better security.

My impression is that the business of the government can be done with more advantage to the country by a combination of Banks in N.york than by any single one because first the security of the government would be greater and next, the power of sustaining the currency would be increased. The latter I esteem a most important consideration. Moving as much paper currency as we do, & its being dependant <illegible> upon the demand for commercial operations we must always be exposed to a derangement of the currency whenever there shall happen an extensive derangement of the commercial concerns of the country.

It has been so in England notwithstanding the circulation of the Bank of England is far less influenced by ^the^ mercantile operations of their country than ours.

The situation of New york is such that commercial embarrassment must always be felt there first & most seriously & have the necessity of concentrating at that point all the resources that can be made available.

With the combined strength of the banks there aided by the use of the government deposits & with a suitable credit in Europe which they would find it <illegible> to establish & an object always to possess, there can be no doubt that they would possess all the power of upholding the currency of the country which the U.S. Bank ever possessed & probably all that the necessity of the case would require.

Those banks might & would undertake to receive all the revenue of the government at every place where collected & be responsible for the disbursement wherever required in the same manner as the U.S. Bank now does, but such a proposition would encounter the hostility of the local institutions in the other commercial cities of the Union & on that account probably be somewhat objectionable.

With regard to the prosperity of removing the public deposits at present, I have of course nothing to say but my object is merely to make some suggestions in anticipation of the possibility of such an event, & to express the hope that in that event they may not be transferred in N. york to the Manhattan Bank.

Hoping you will excuse the trouble I give you

I am Sir most respectfully 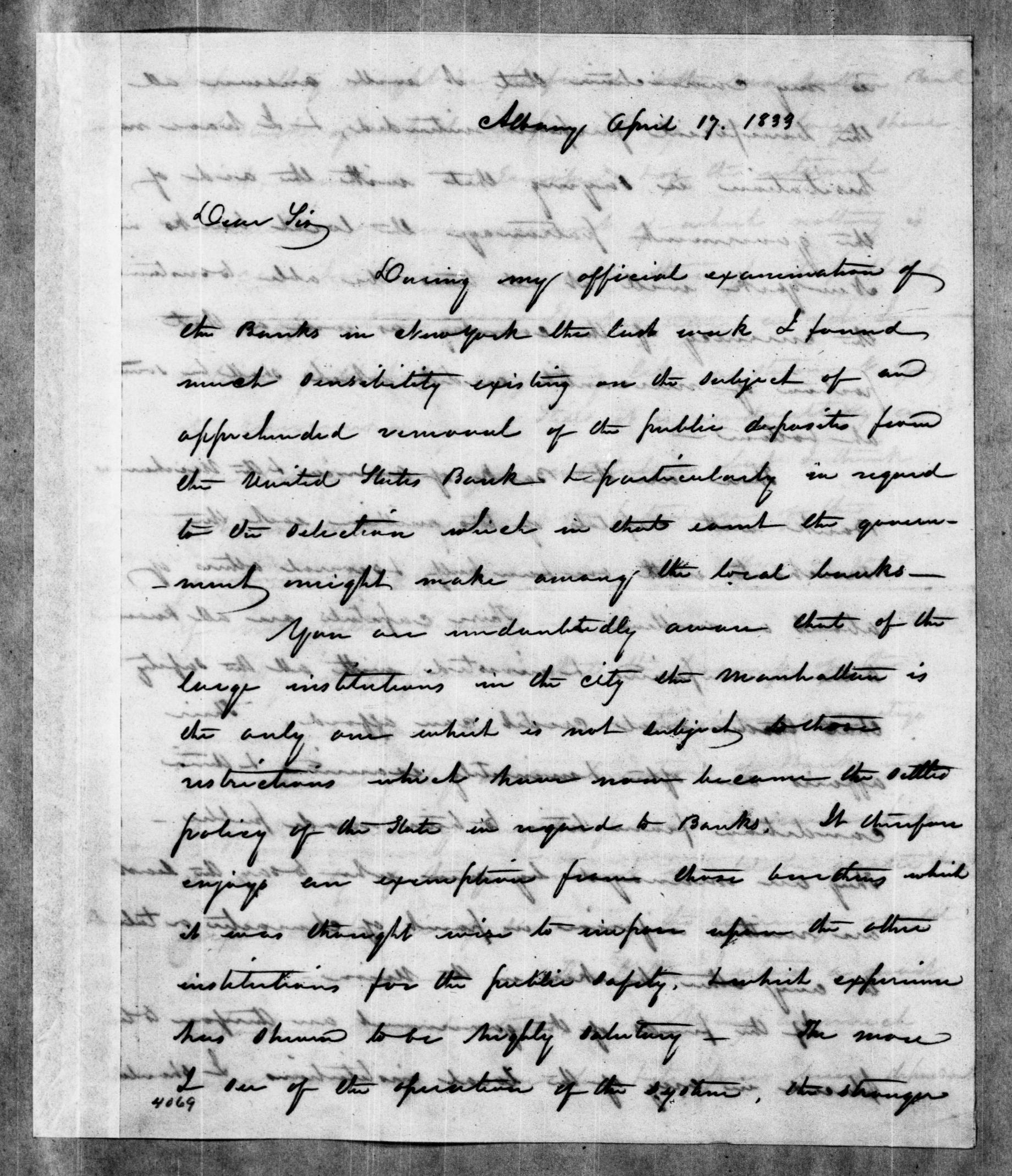 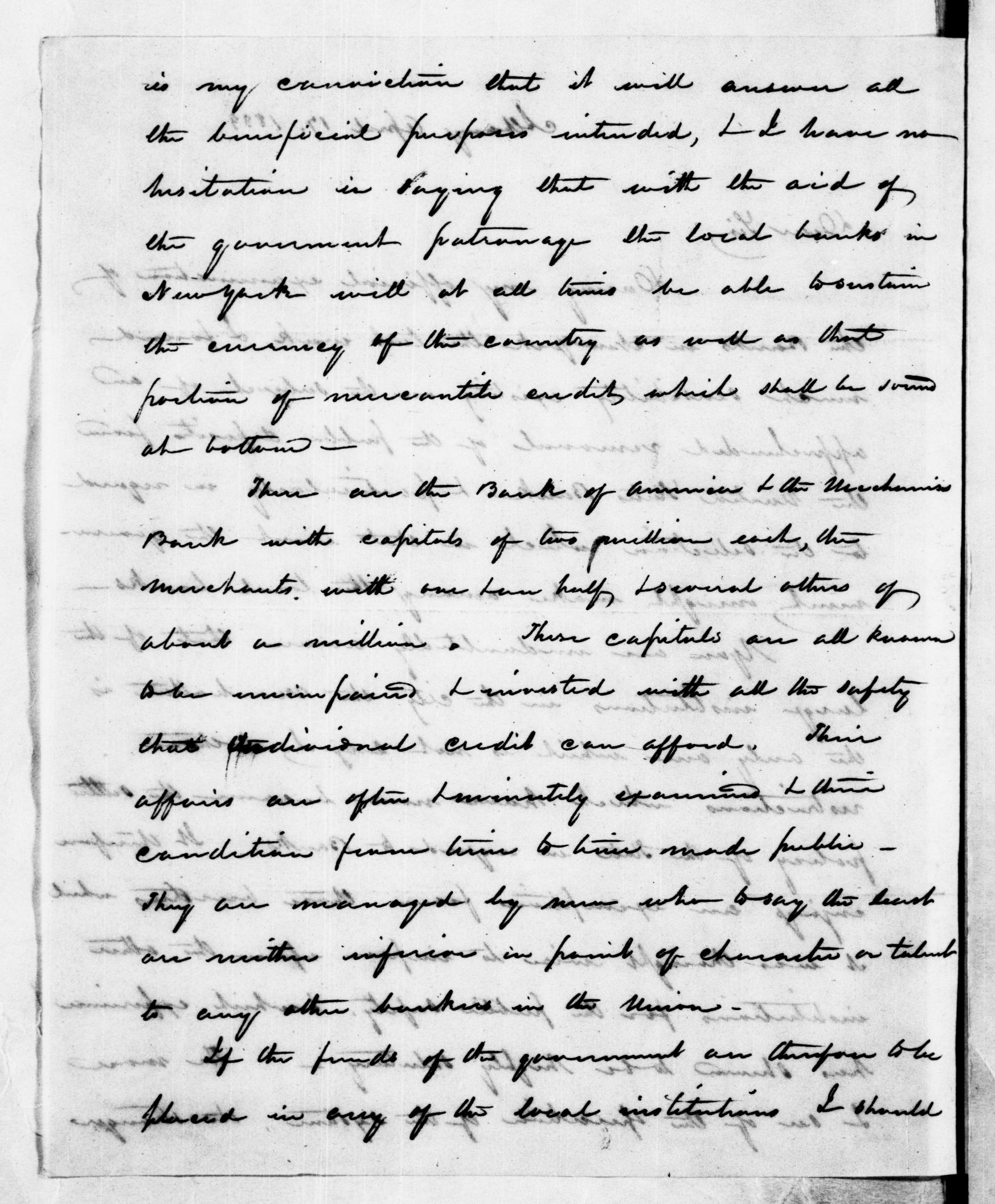 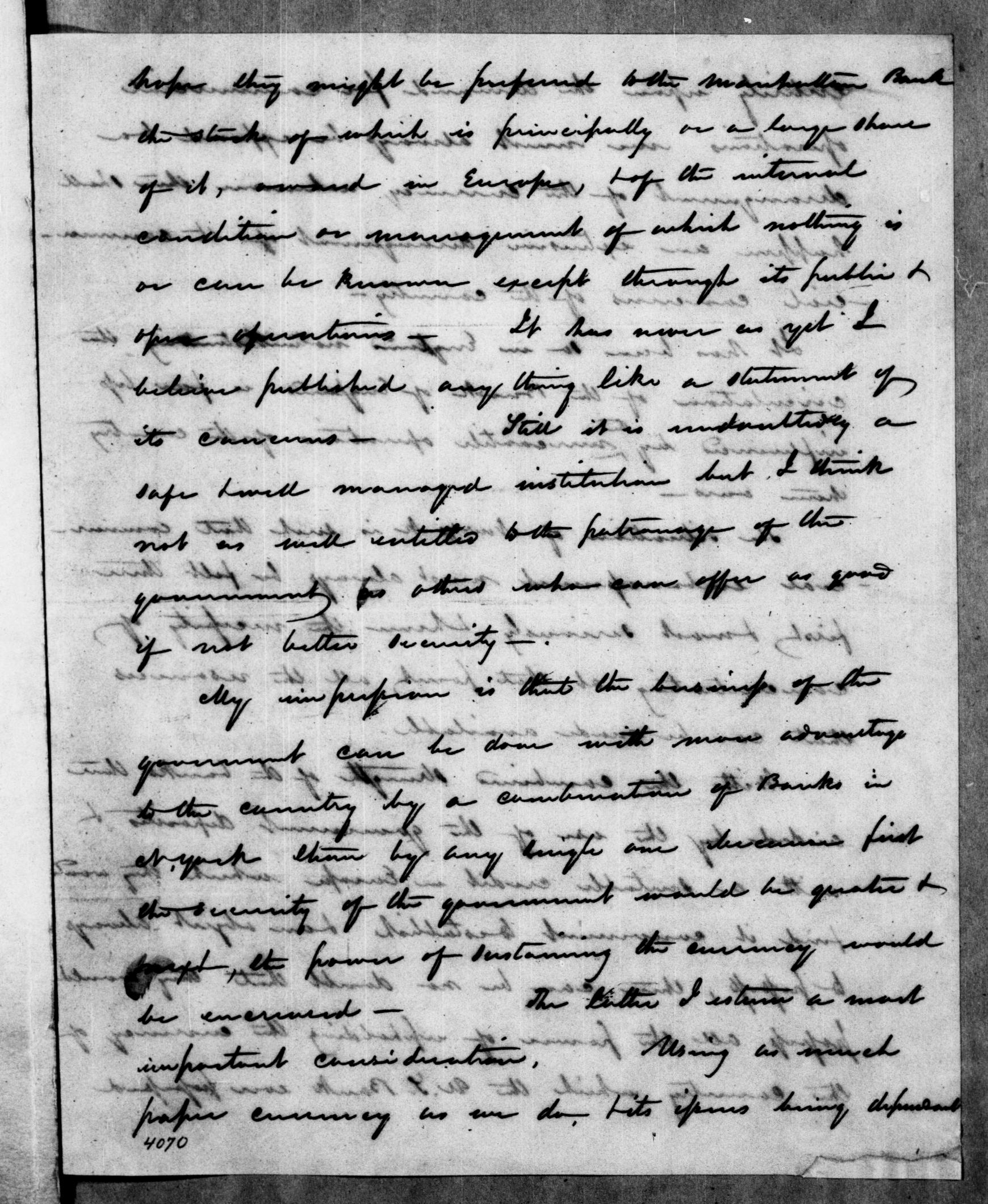 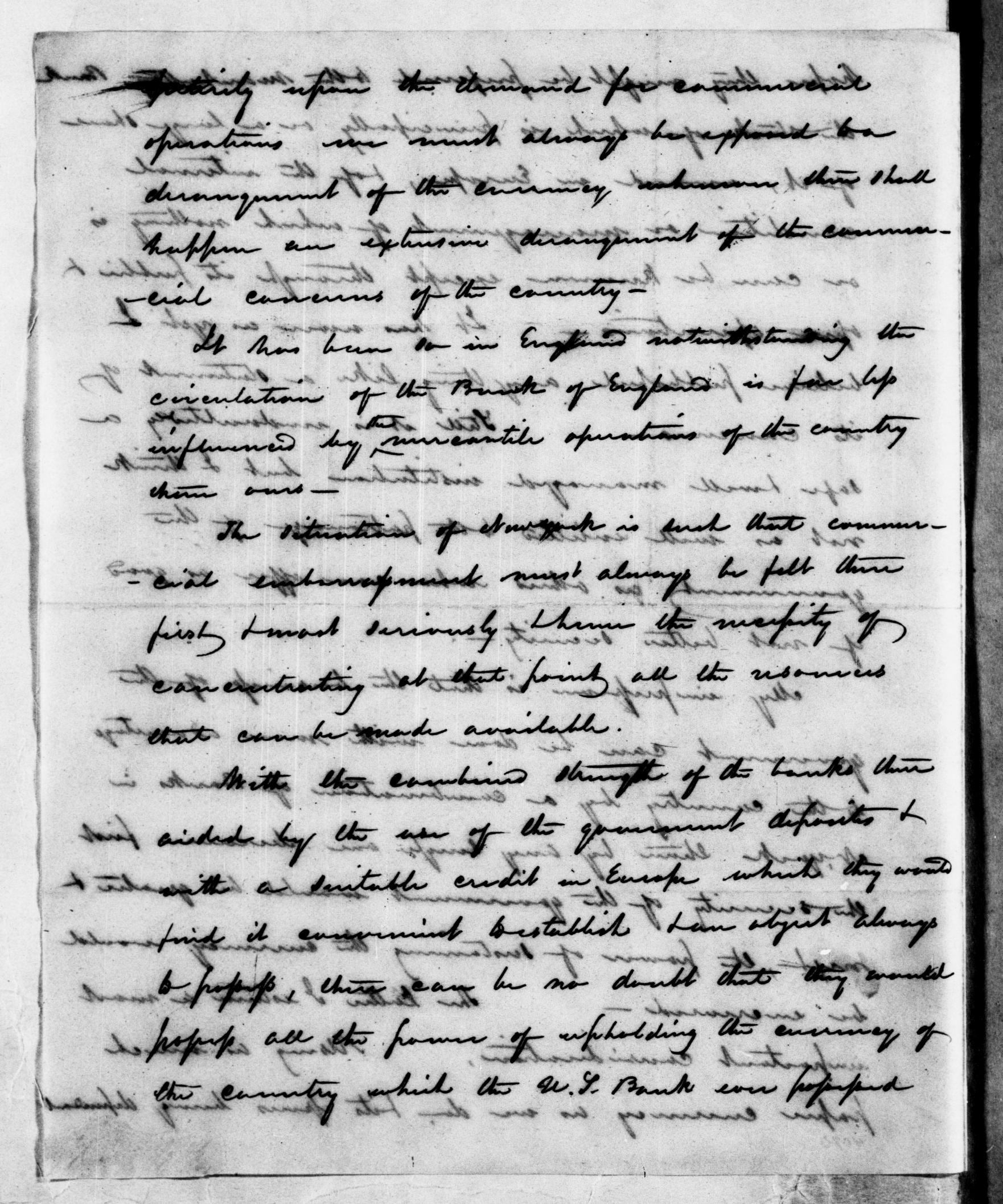 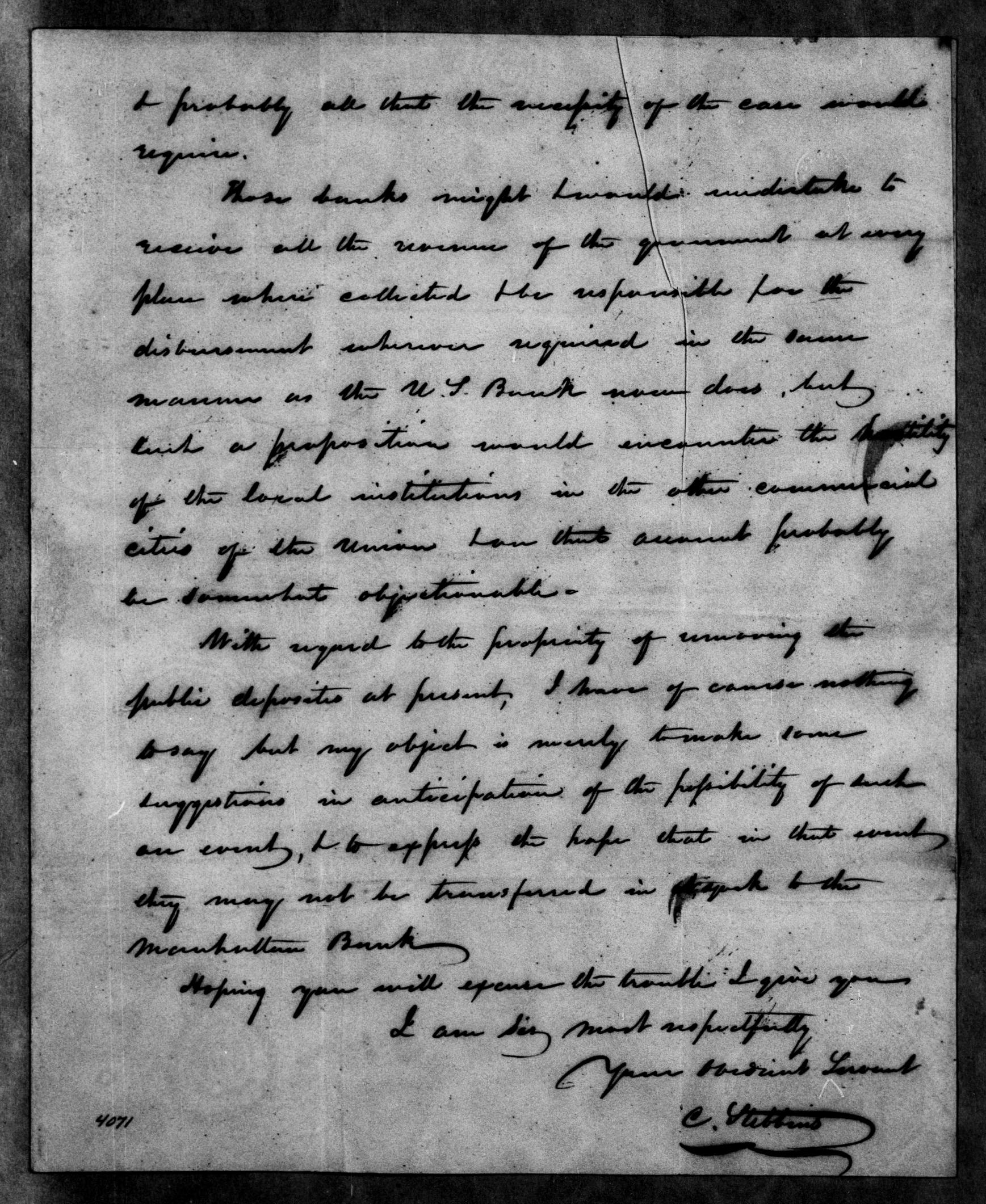 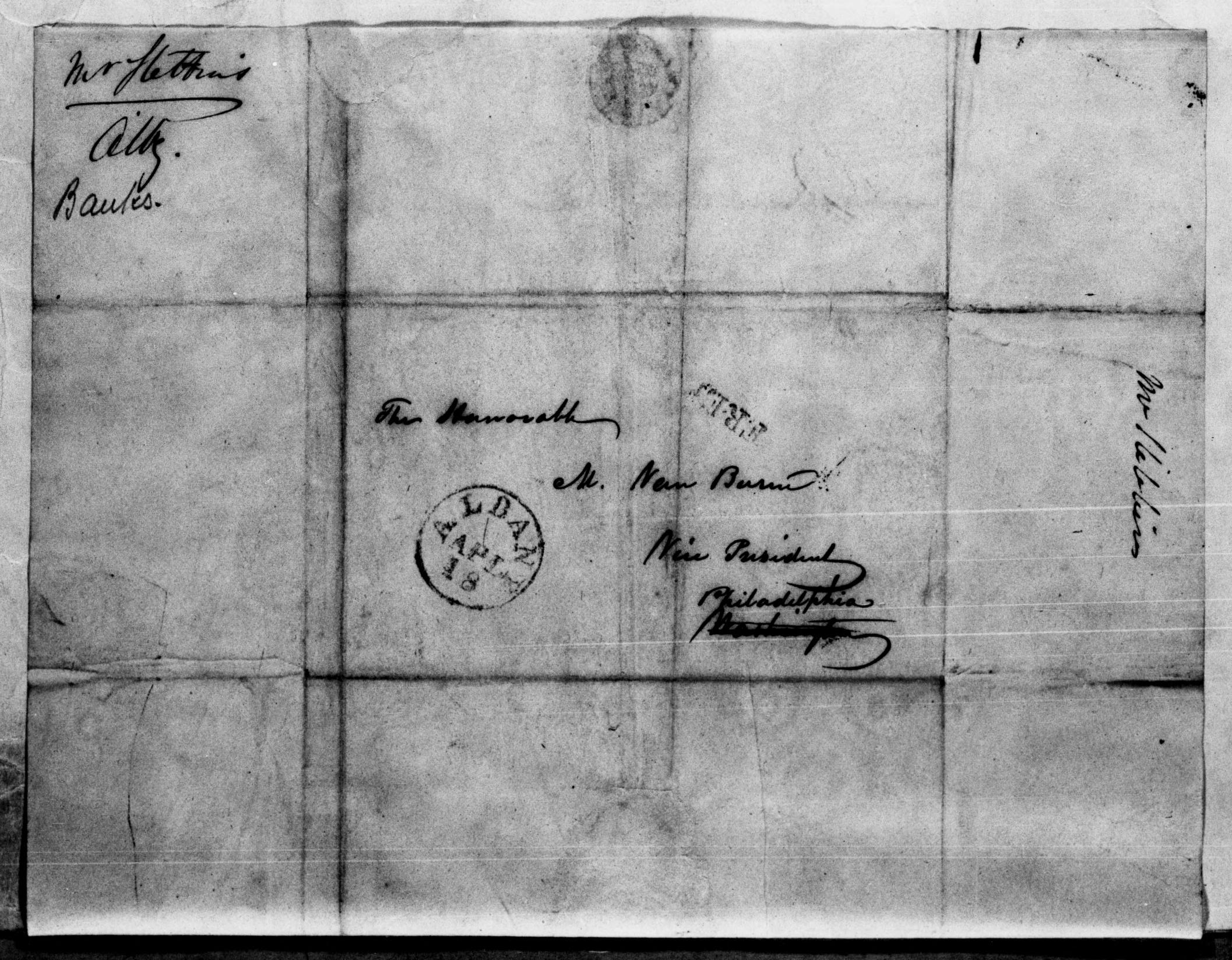