Upon making inquiry where you are at present I am informed that you are most probably still at Washington, and I shall make no apology for writing to you on a subject, which I do not profess fully to comprehend, not having read the discussions which have taken place on the Subject. I am therefore governed in the opinion I am about to express on such Impressions as I have heretofore been impressed with. The President I learn has kept back the Law passed, in regard to the public Lands ceded to the Genl. Government, to which he was deemed to have such objections as to interpose his Official authority, to prevent its becoming a Law: which I hear has passed both Houses of Congress by strong Majorities on mr Clays project for making a distribution of the Monies arising from the sales of those Lands to the different States in the ratio of their Population. If the President is opposed on the Ground that is taken by Mr Benton that Congress ought to reduce the price to a mere nominal price and to cede them to the States in which they happen to be located, it seems to me that he will never be sustained by any of the Atlantic States, (the old confederation at the time of the Cession) I venture to assert that New York will support no man hereafter having such an object in regard to those Lands, and it is with this view and under this impression that I must presume to caution you not to identify yourself with such a policy, for the purpose of conciliating the good opinion of those States on that ground unless you mean to repose yourself entirely on their influences. I should hope that the President will avoid placing himself with all his present, merit[o]rious popularity on a new ground which I fear would loose him the confidence of those who had so magnanimously sustained him hitherto. Whatever more is done in the way of <illegible> the Lands of that Territory operates as a <depreciation> of the Property in the Old States. It seems to me also not to be correct that the disprobation of the ^purchase^ Monies in the manner contemplated is a necessary drain of their wealth. These purchase monies are drawn from the old States and are there laid out by the population who emigrate, to whom the present price of those lands is an abundant inducement, for such an enterprize, but the greater mischief is that we are thus drawing from all Europe the refuse of their population, and by whom the old states are soon to be governed, a population illy calculated to be^come^ the Directors of the General Government, which should not be intentionally encouraged. It is now the time therefore that policy in regard to that Domain should soon be settled, there is no subject that is more calculated to produce an over throw of the union than this. Without such a population, upon this Territory, there can be no argument raised in favour of such a principle, the entire claim in favour of such a disposition arises from that population already in that Territory, who certainly have no claim as they have been fully secured and are protected in such Rights as they have fairly acquired for their Money, and if a just proportion of the <proceeds> arising from Sales is distributed to them they have no right to lay claim to the whole country, any more than the old States who parted with their right to the Genl. Govt

It was not my intention in commencing this Letter to have said a single word on the Right, of this measure, but merely to state my impressions that it is a subject the most dangerous for a Public Character to commit himself upon at the present juncture: in favour of such a relinquishment to the new State and I fear if the President over identifies himself with it he will lose all the opportunity of being usefull to the extent that is otherwise anticipated with in the four years for which he is elected, such I consider to be the obvious consequence of so dangerous a collision of Opinion & Interest. Indeed I fear that this subject will do away all past, <destructions> of political Parties, and that this question will amalgamate the whole mass of population into such a new division which would be destructive of all principle. The rapidity with which the Western Territory is populating alone affords abundant proof that it is not possibly the ^intire^ ofspring of the redundant population of the Old States, & it is easily foreseen that this population must soon be a majority & will govern the future polic[y] of the Genl. Government. Look at Ohio she is already one of the large States, in the Union, made a State with my own concurrent Vote. New York by her Canal has made a great Highway to this Western Territory through which a Bushel of Wheat from Claveland, or from the Michigan Territory is transported to Rochester for <1>0 Cents, see what a  depreciation this has occasioned to the property in our own State with the exception of the <Section> adjacent to our Canals. We have thus made the great Western Territory of treble its former value to the U. States. ^at our own expens[e]^ 10 Bushels of wheat is raised in Ohio with 1/4 of the Labour which it costs to raise five on the North River. Of course already the condition of the Western population has already been thus rendered more prosperous than our own. Believe it therefore as certain that New York will <illegible> by its constitutional power such an other measure still further to humiliate the condition of its population. The people will all unite in an opinion that the least that is due to them for all this Adventitious Western Prosperity is a due portion of the proceeds of the sale of those lands, which are no longer required for the extinguishment of the National Debt. I hope therefore that the not assenting to the Bill for the distribution of those monies can be placed on the Grounds, which the People of the old States can approve of. If I am wrong in all this believe that the prejudice in which has misled me is so general and so deeprooted in interest as to be likely to become the popular creed of our native States. It is this I wish you to reflect on & well to consider before you become identified with western pretentions on this Subject. I hear you are about taking an excursion through that Territory. I shall be very unwilling to give you up as the favourite son of N. York (the common appellation of late), and have therefore presumed to suggest my own apprehensions before you, as well as the President. If these apprehensions, arise from mistaken notions there is no one more ready to excuse them than yourself who know me too well to believe for a moment, that they are intended either to dictate or mislead.

I write partly from first impressions, which may not have been will considered, but they are the honest impressions of a Mind too independent to be improperly swayed

With my best wishes from a sincere regard, I am your sincere 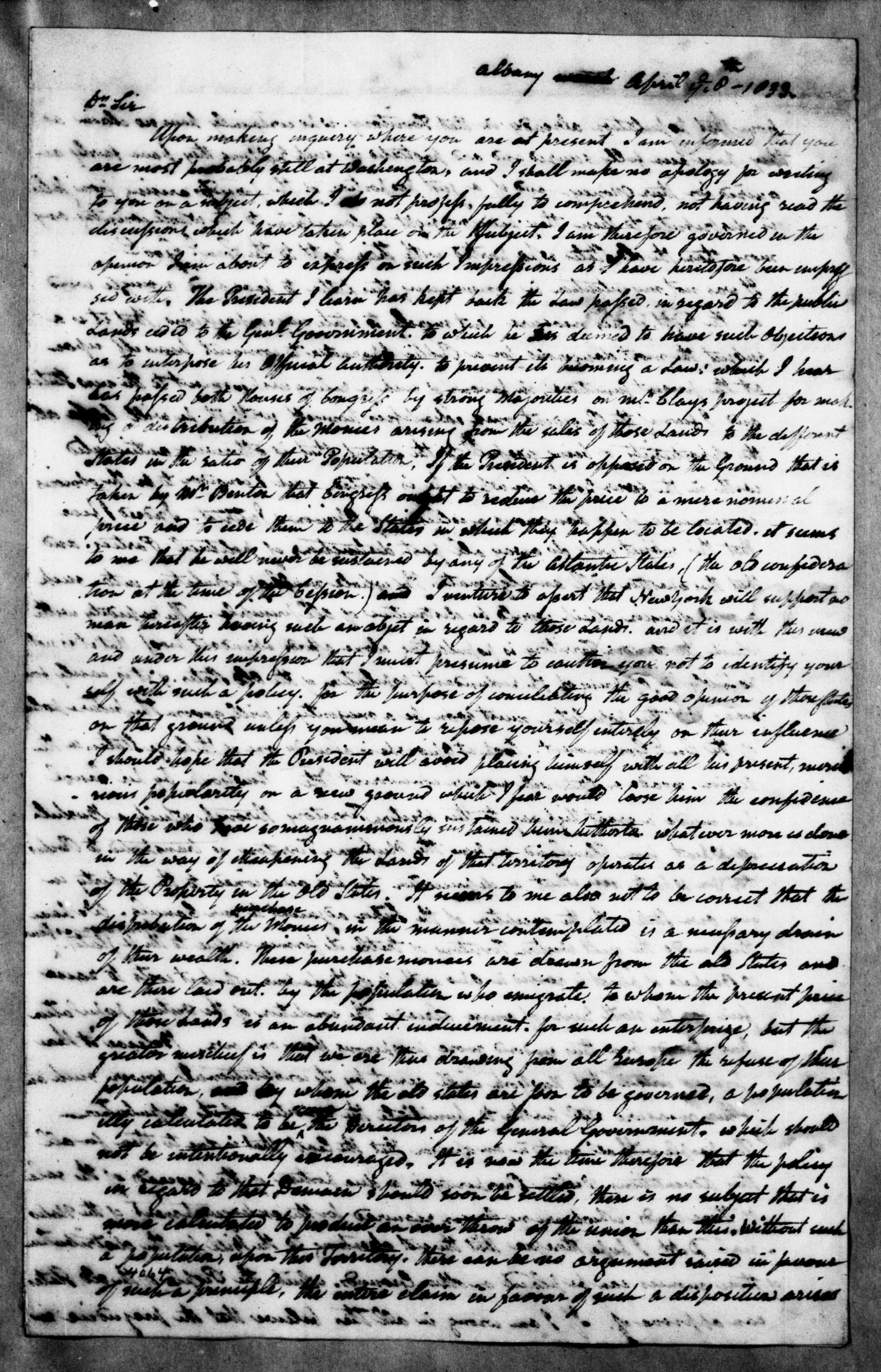 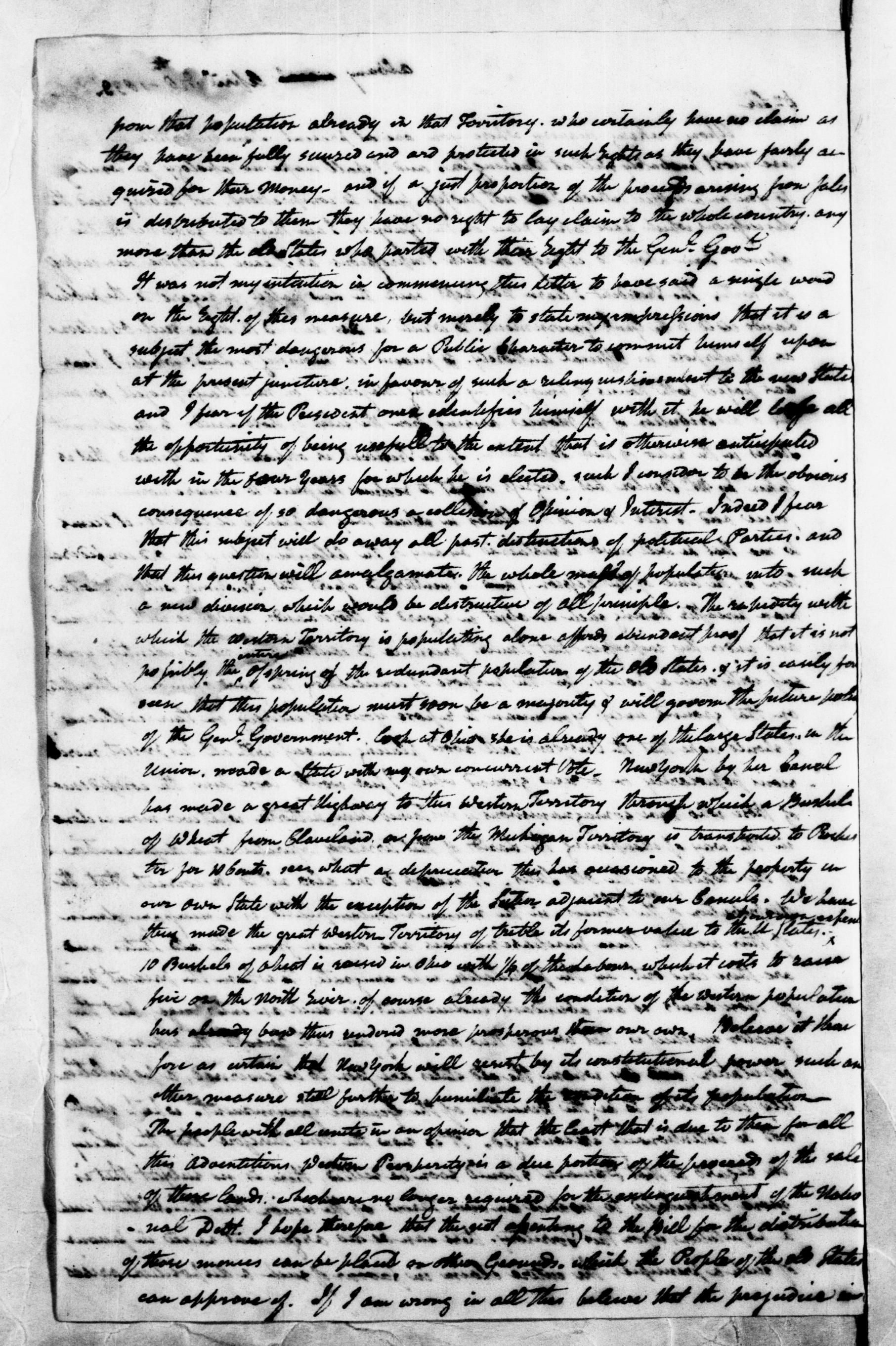 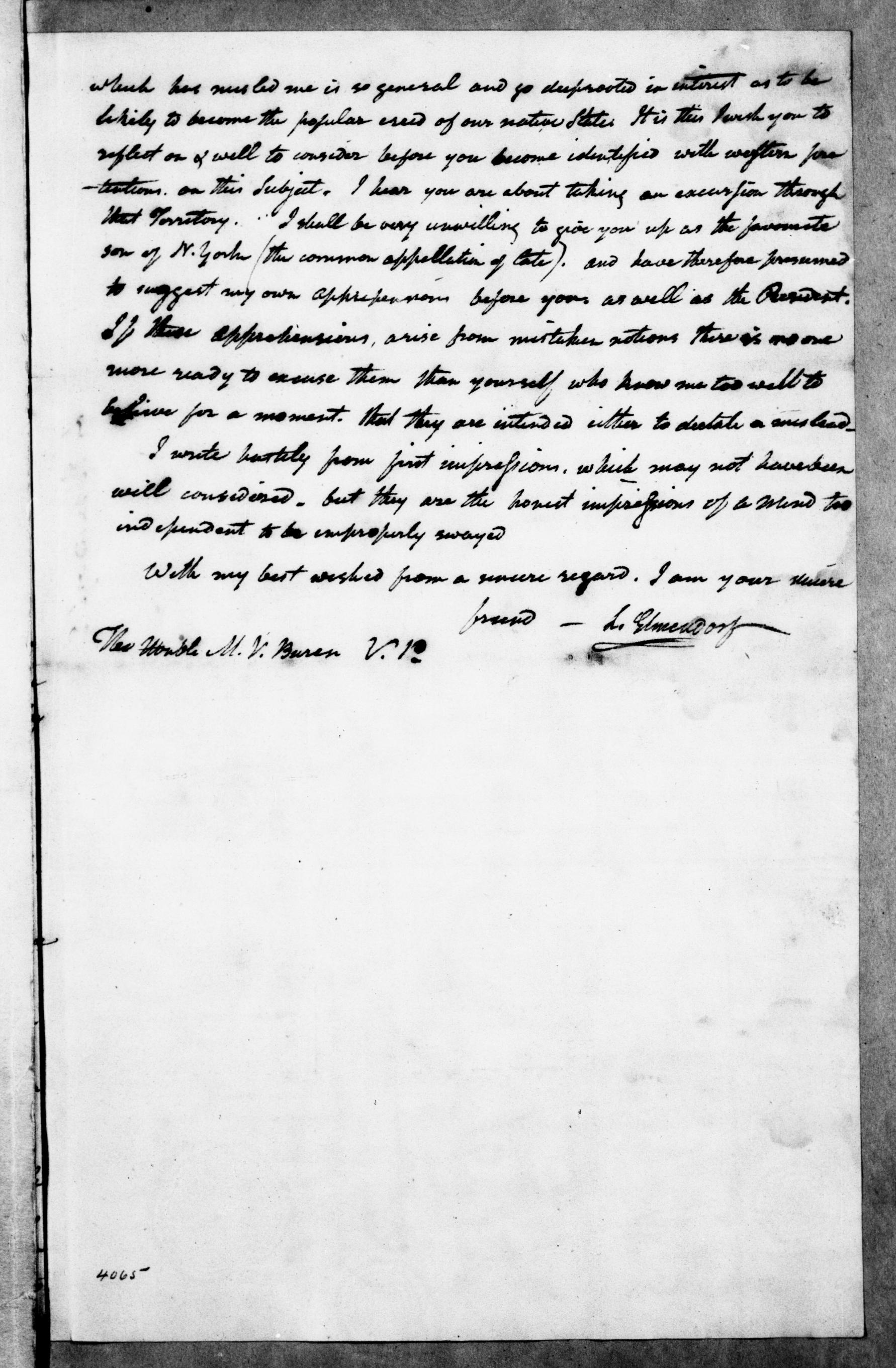 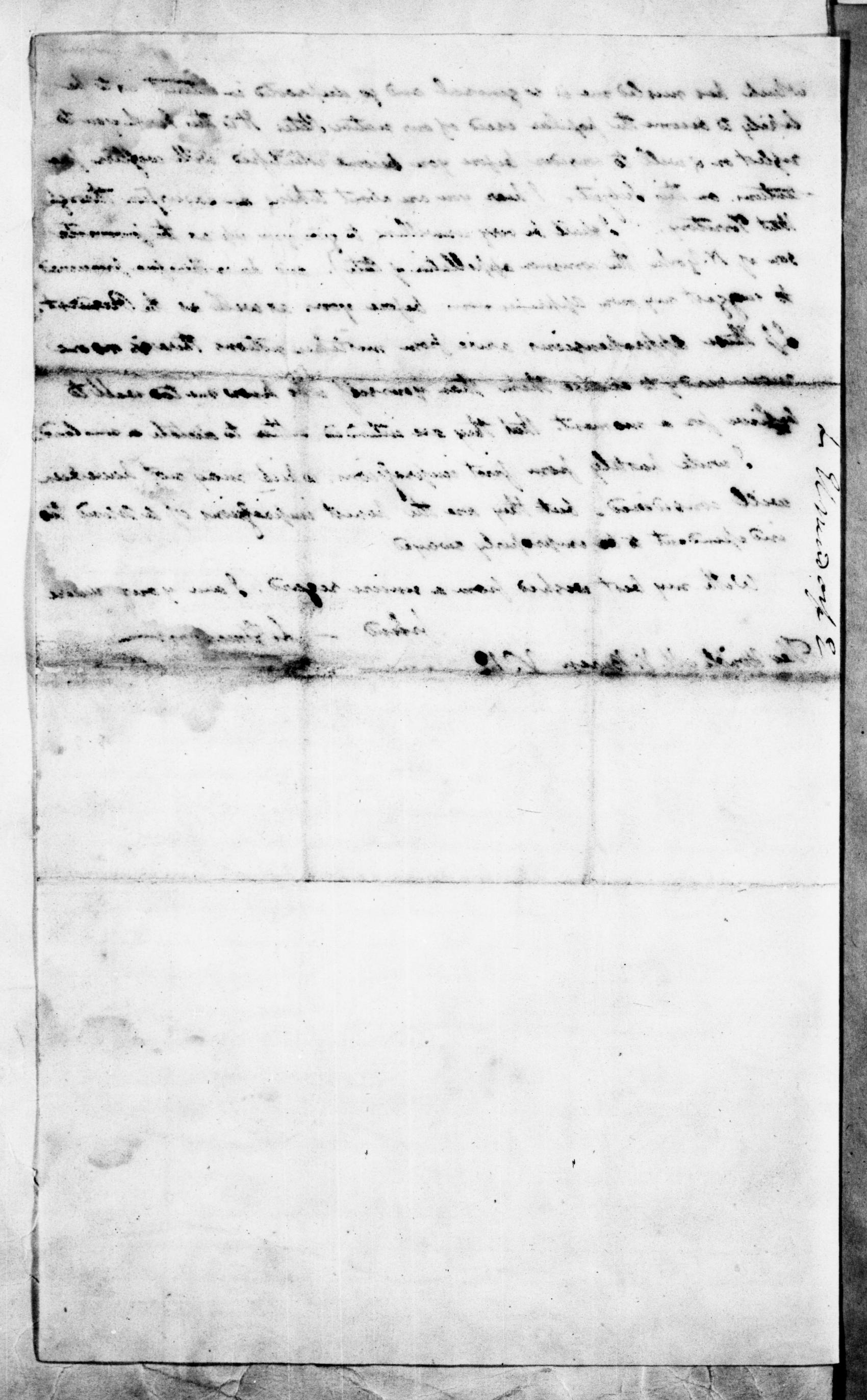