I trust that I do not err in relying so far on your friendship & good opinion as to believe that no apology is necessary for calling upon you for an evidence of them under the present circumstances in which I find myself placed. I do this with the conviction which it would be painful to me in the extreme to <illegible> to entertain that you have not been aware of the manner in which I have been ejected from office. The accompanying documents will put you in possession of the <illegible> facts of the case & present an instance of injustice & intrigue which I am confident has no parallel in the annals of any administration. I have been informed that two of my friends have written to you on the subject and <furnished> a copy of a remonstrance to the president, which contains the names of nearly all who are known to him as his <true> friends & the leaders of his party. It was signed by General Plauché who has thrice given his vote as elector for General Jackson, Trasimond Landry who has twice voted for him as an elector & Sebastian Hiriart, who also voted for him in 1825 & has since been his greatest supporter. By every officer of the government in this place except Mister Gordon & Peter K Wagner the individuals who are alluded to in the remonstrance. By Messrs. Labatut & <illegible> who have either one or the other presided at every general democratic meeting held in this city during the last eight years, by the mayor & recorder of the city, by the Jackson members of our city delegation, with the exception of a gentleman, who while he fully approves, had certain personal reasons for not making himself a party to it. It was got up on the <spur> of the occasion & was confined to persons whose names & political standing are familiar to General Jackson if it had been thought necessary or proper the <signature> of nineteen twentieths of the party could have been obtained without difficulty. You will find among the documents copy of a letter of General Overton who of course is known to you, he was one of our electors in November last. I doubt not that in a day or two, I shall have similar testimonials from Messrs. Mouton & Scott, the two remaining electors whose residences are in remote parishes. If we have not all been deceived in General Jacksons character & my case be presented to him in its proper light, the <information> which I have <asked> will not be denied, if but my chief apprehension is that persons about him who may have aided in <illegible> my dismissal may feel an interest in suppressing the representations which have been & will continue to be made from every quarter of the state. Were I persuaded that I could have a fair field & that the issue made between Mr Gordon & myself could be fairly tried upon its merits, I should not go out of the <aid> of my friends here to obtain <success>, as it is I am <constrained> to call upon you. It is with <confessed> reluctance that I speak of my own merits or services, as a member ^of the party^ of which I now consider you as virtually the head, that party has (& I ascribe to myself no inefficient influence is bringing about such a result) with a degree of unanimity which could scarcely have been anticipated <illegible> ^<illegible>^ for you as the fit successor of General Jackson.

To preserve its organization & moral force, it is necessary to destroy an impression which has been gradually gaining ground & which my removal has served to confirm, that an individual of all others, the most unpopular in this community possesses in everything relating to Louisiana, a controlling influence with the president. This influence has been acquired by a course of persevering intrigue & by the systematic denunciation of every one who may have the misfortune to excite the ire of Mr. Gordon, & is boasted of by him in a tone calculated to degrade the president & disgust his warmest friends. The crisis has now arrived & the question must be decided, whether the single voice of Mr. Gordon is to be more <protected> at Washington than the expressed & unanimous wish of the whole party. The occasion calls for frankness & I assure you with the utmost sincerity that if this man be not put down, the party that has uniformly supported General Jackson must inevitably be broken up. No man who respects himself will consent to submit to so degrading a <illegible>. Mr. Gordon is isolated—alone, not a voice is raised in his favor, there is no exaggeration in this assertion. I declare upon the honor of a gentleman, that there is no difference of opinion, no division of sentiment in relation to my case. Mr. Gordon has established an influence at Washington based upon a mistaken estimate of his standing here, & has availed himself of that influence to minister to his own selfish views & vindictive passions, stripped of the adventitious importance given to him by the firm confidence of the president, he will at once shrink into his native & proper insignificance. The [harm]ony of the party cannot be affected by his dismissal, it must be destroyed if he be not put down. I have ever considered your attachment to & steady support of your friends as one of the distinguishing traits of your character & one of the chief elements of a popularity which your opponents have been pleased to ascribe to other causes.

I now claim to be entitled to that support if upon inquiring into the circumstances of my case, you should yourself be satisfied that I have been unjustly treated; if on the contrary there should be <aught> in my character as a man, a public officer, or <illegible> a member of the party, <that> will not <bear> the most rigid & critical <scrutiny>, I have no claim to aid or sympathy. If I have not gravely overrated your influence at Washington, it is in your power to <secure> me redress & I feel that I have some claim to call upon you to exercise it. I beg that you will do me the favor to write to me frankly. I pledge myself that whatever may pass between us, shall so far as you may desire it be in the strictest confidence. I shall write to our friend <illegible>, on whose friendly offices I also <illegible> this <illegible> <business>. Believe me to be, my dear Sir, with sentiments of the warmest respect & esteem 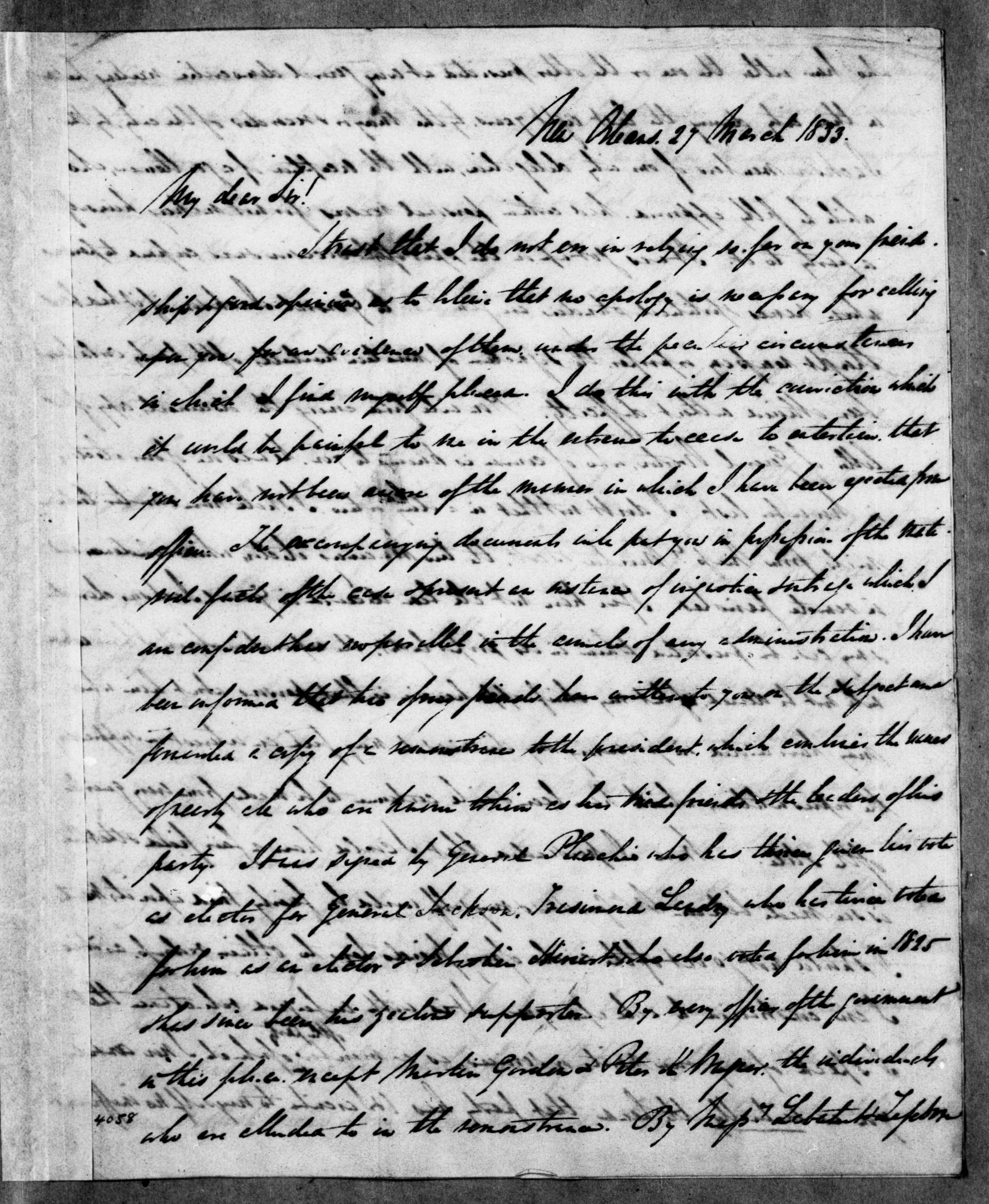 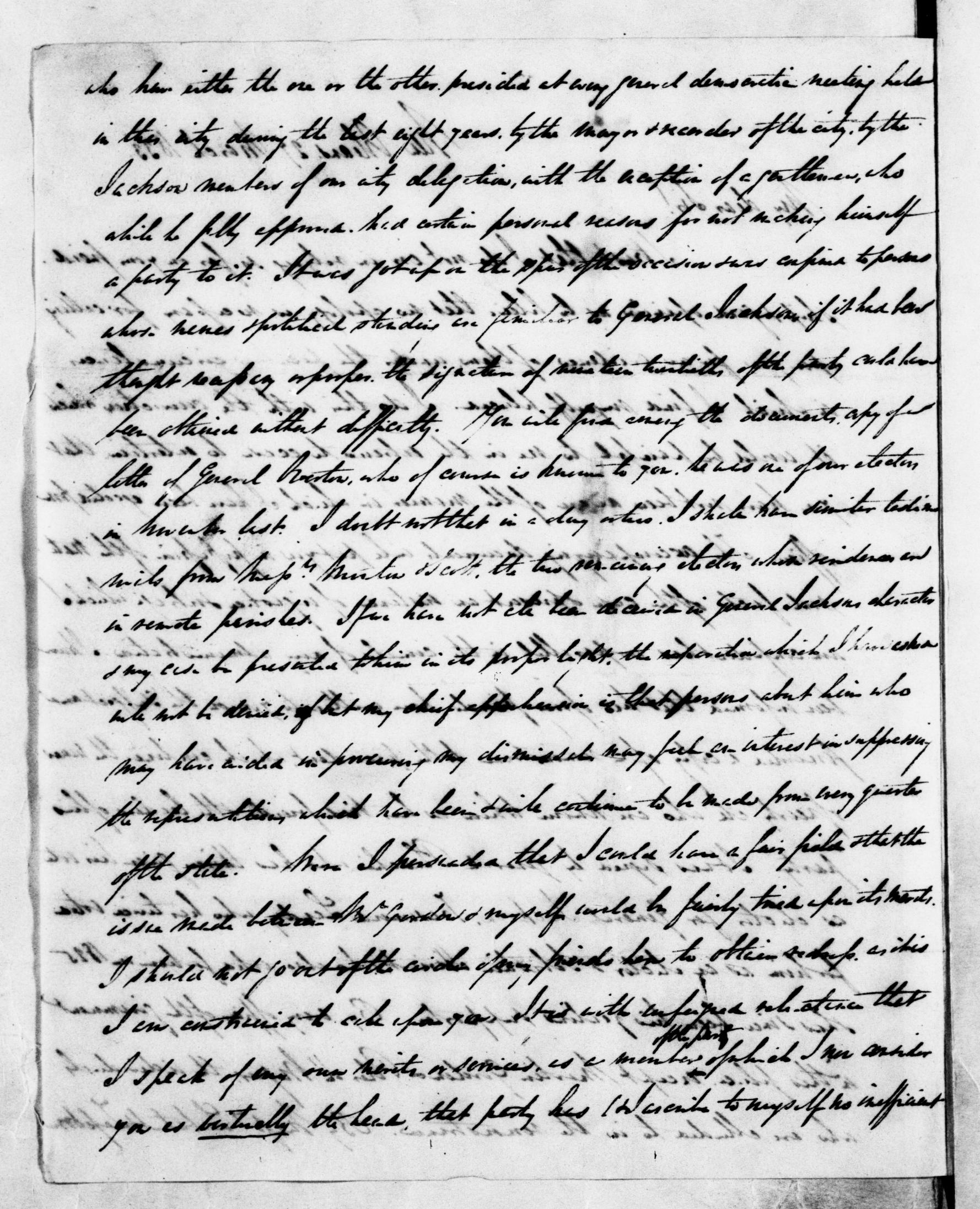 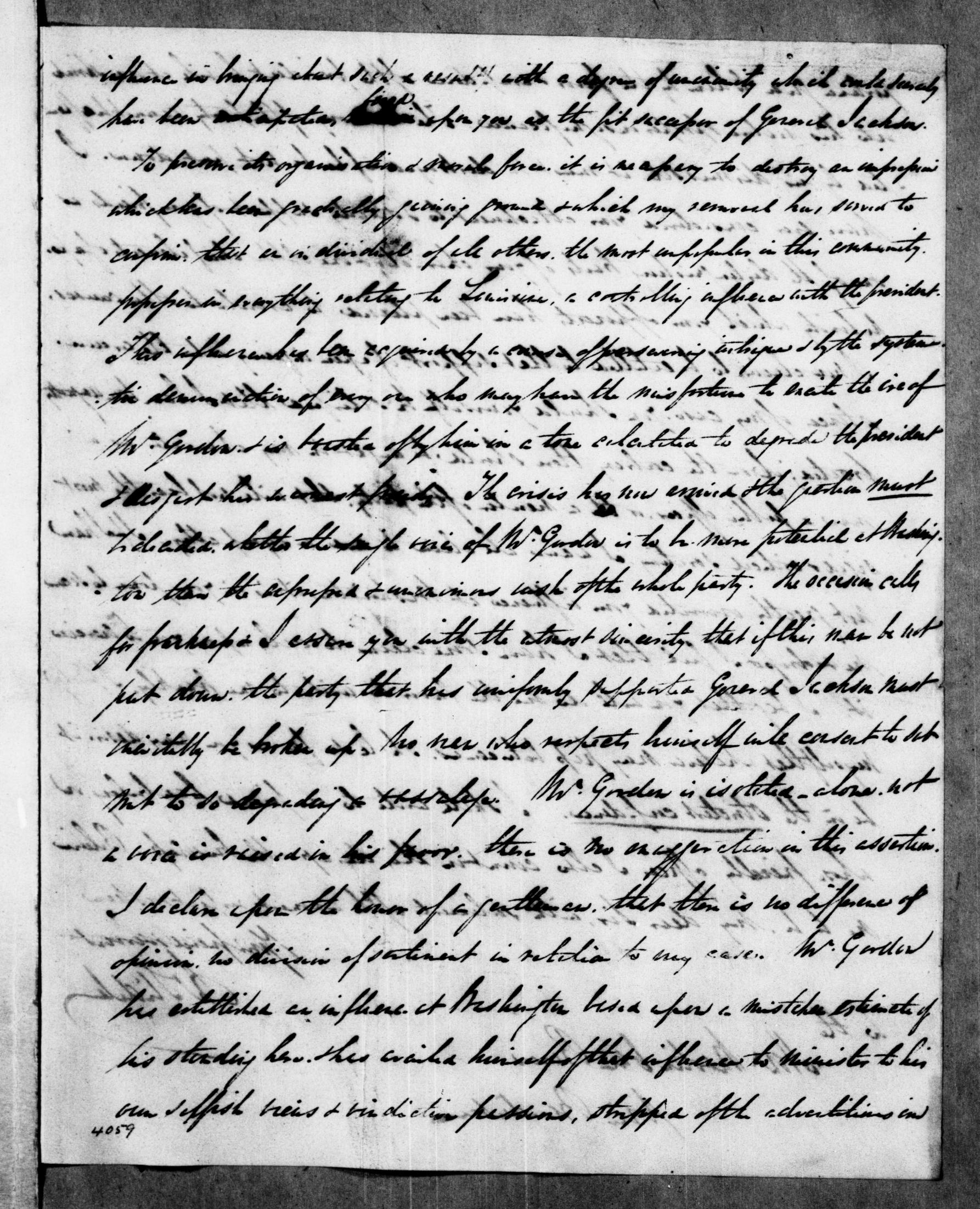 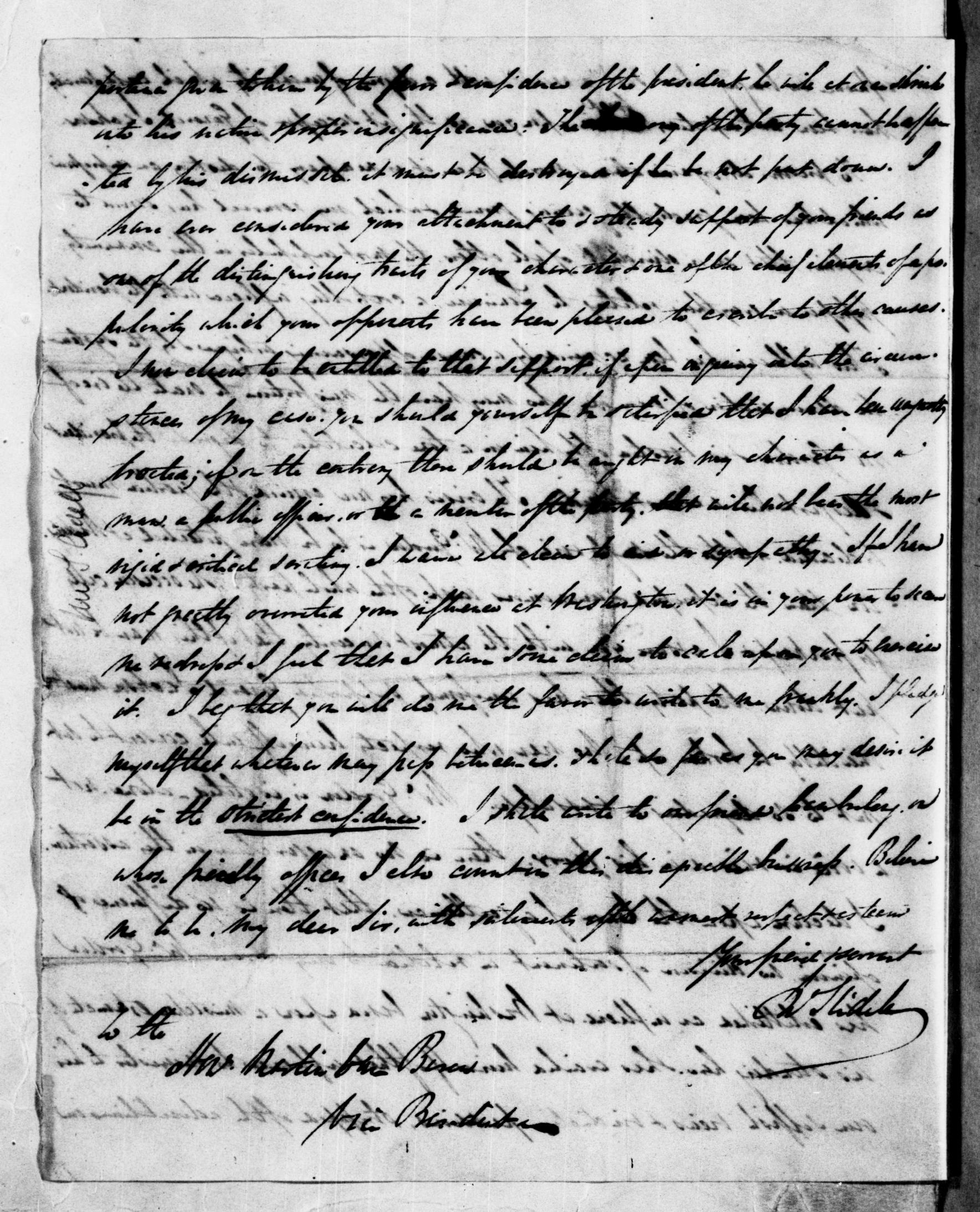