I have not written you for some days because I desired to have some authentic & definite developments to take place upon which you could better rely as to the course of things <now> taking place here than on mere Rumors. I am sorry that having waited so long for well founded news, I should ^have^ none other than bad to give you.

The game I consider to be up both as to Cheves & McLane and that events are taking such a tendency as in all likelihood to give you not very powerful associates.

On the arrival of the General after the lapse of a day or two ^three or four^ days I called on ^him^ a mere visit of salutation and with the rest of his Southern friends (I believe) I was willing to let the thing so rest, that if he wished to see us privately & confidentially it was in his power to give the necessary intimation which it was our duty to pursue no course which might wear even the aspect of our desiring to force our opinions upon him. Several Days elapsed, and no such intimation was given to those who if they had no other qualification at least possessed those of fidelity to our common cause, and a proper disinterestness in regard to all hopes desires & prospects connected with themselves. In the mean time what was no very favorable omen, we understood that the old gentlemen was constantly surrounded by some individuals of whom it may be said without disparagement that whatever might have been the claims to the personal regard of the General ^they^ did not nor do not enjoy in any very <illegible> degree the confidence of his party. Then Shortly after these tokens there came out the extraordinary annunciation in the Telegraph that the general would be happy to see & consult All, in relation to the formation of his Cabinet who might think proper to visit him. In this ^term however^ comprehensive I did not & my Colleagues did not think proper to include ourselves, <illegible> and we still held back. Day before yesterday the old gentlemen in the course of a conversation with Mr Calhoun informed him that having the highest esteem for, & confidence in Drayton Hayne McDuffie & Hamilton that he should be very happy to see us, & to confer fully & freely with us on public matters. This Message the Vice President communicated yesterday Morg., to us & Hayne & myself made an arrangement to call in the evening for which purpose the Genl made <illegible> to recommend us ^appointed^ at 8 0.0. to receive us.

Hayne deputed to me the office of breaking the Ice, and consequently I had to take the point. I stated to the General that in his triumphant election he occupied a most favorable position for gratifying the just expectation of the Country in arranging for its service one of the strongest and most brilliant Cabinets, that had ever been formed that no president had ever occupied this enviable position but himself and Genl. Washington. That he came in untrammelled & unfettered, and having not only the power but the means from the distinguished resources furnished by his own party, the Country had expected & would expect such a selection as would contribute to his old fame, which if added a solid security to the interests & happiness of the Country itself. That he was strong enough to cast aside the measureable political geography which had at once been the curse and the destiny of the feeble administration which had gone before him, and that we felt confident that he had such a hold upon the whole people of the United States that he could appoint all four of the Members of his Cabinet from the smallest State in this Union, if those four men happened to have the most preeminent qualifications for the respective offices which he might think proper to call them.

I then remarked that the selection which by public rumor he had made of the first offices in his Cabinet has been highly acceptable to our party but that much anxiety was felt as to the other Members of ^places in^ the Cabinet more especially in regard to the Treasury. In reply he remarked that he <illegible> <then> ^had^ determined not to put into this office either an ultra tariff or an anti ^ultra^ antitariff man, that the Peny. Delegation had waited upon him in a body and whilst they disclaimed all intention of demanding anything for or in the name of Peny. yet if he had determined to bring anyone of her Citizens into his Cabinet, they would take the liberty of designating Mr Ingham as the ^man^ most acceptable to the democracy of that State. He then remarked that circumstances did not of course permit him to assign to Peny. the first Seat in his Cabinet and hence the second would have to be regarded as hers, and that this movement on the part of her delegation, was according to his present views conclusive in favor of Mr Ingham.

Standing in the relation which Hayne and myself did to Mr Ingham it was not for us to disparage a gentlemen, with whom we were ^had been^ in the closest political association & for whom we entertained <more> ^none^ other than sentiments of kindness & esteem. Here a pause in our conversation took place which the General broke by observing that the leading objects of his administration would be to quiet the public Mind in regard to the tariff, if to pay the public debt, and to reform the such abuses of administration as might exist. This gave me a fair opportunity to bring the old man back again to the subject and to pin him. I remarked that if this was the case it only showed the necessity of his having a first rate man in the Treasury, and that looking merely to his own glory, I could not but name Mr Cheves, now a Citizen of Peny. but if there was any difficulty on that score that our delegation were perfectly willing to have him charged to us. He replied that we could not appreciate ^Mr Cheves^ more highly that than he did but that Peny. would not regard him as a Representative of her interests and that he was thus constrained to say that it would at this time & on this occasion be out of his power to oblige us. Having made Cheves the Pioneer, I then said that S.C. had not one title to ask for herself but if well founded objections existed against his ^Mr C^ being brought in, that Mr McLane (of Del.) could be equally ^highly^ acceptable to the South, and his great merits rendered it a difficult task even to decide between himself and Mr C. He immediately replied that he considered McLane as one of the first men in the Country, <illegible> and that “he should have laid his hand upon him “at once” (to use his own words) but from the fact of his coming from a State in opposition which would send a man of different politics from McLanes to the Senate, and in the present critical State of parties in that body he could not spare him.

I fear after all this the denouement has come forth this morning. By virtue partly of that notorious Liar called <illegible>, and that veracious & sagacious politician called Tom Moore, I give you the Cabinet of to day.

What say you to this? I assure you as Sir Anthony Absolute says “I am perfectly cool, damn cool, never half so cool in my Life." Let me hear from you & be assured My Dear Sir of the constant respect & esteem with which,

I am Your friend, 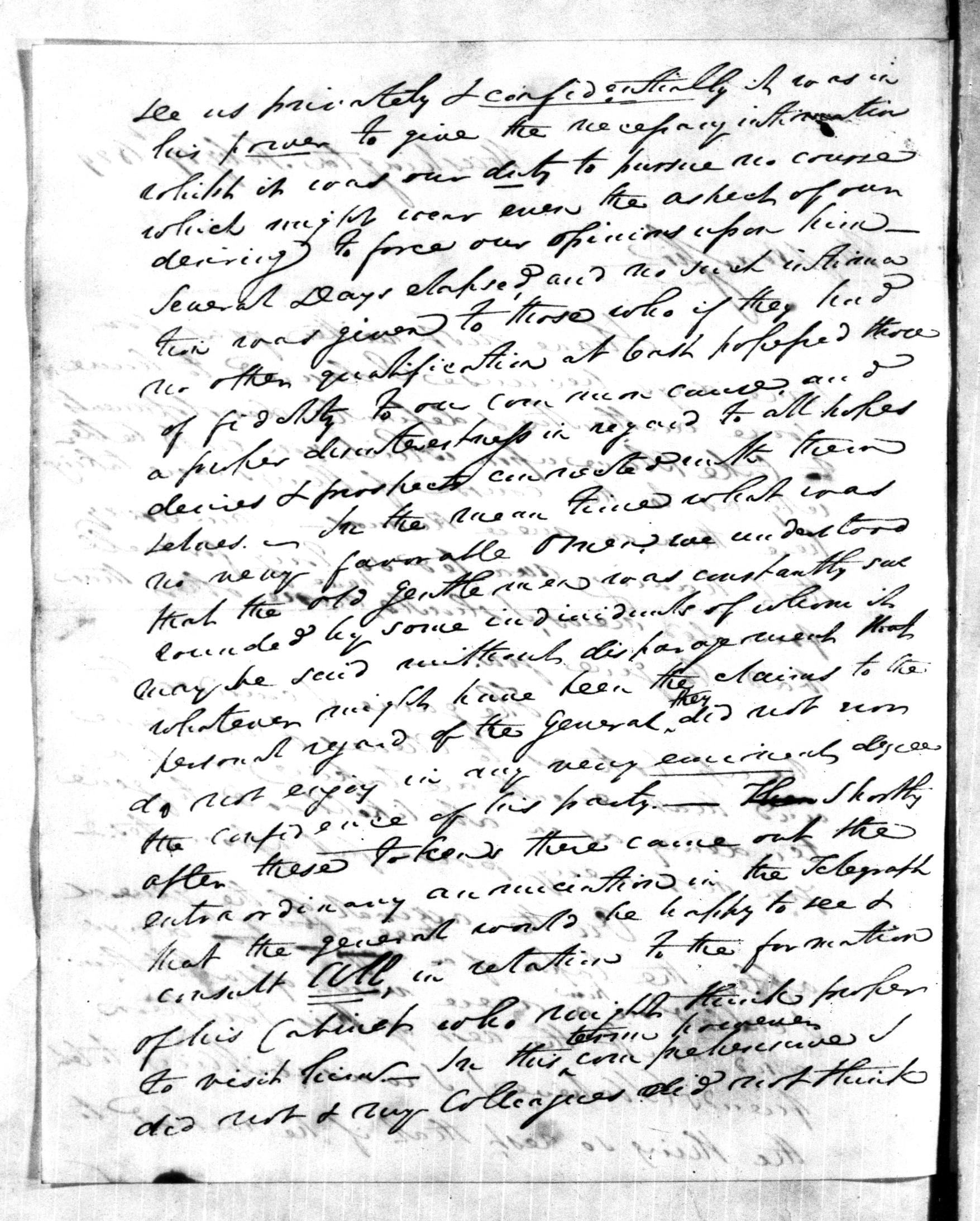 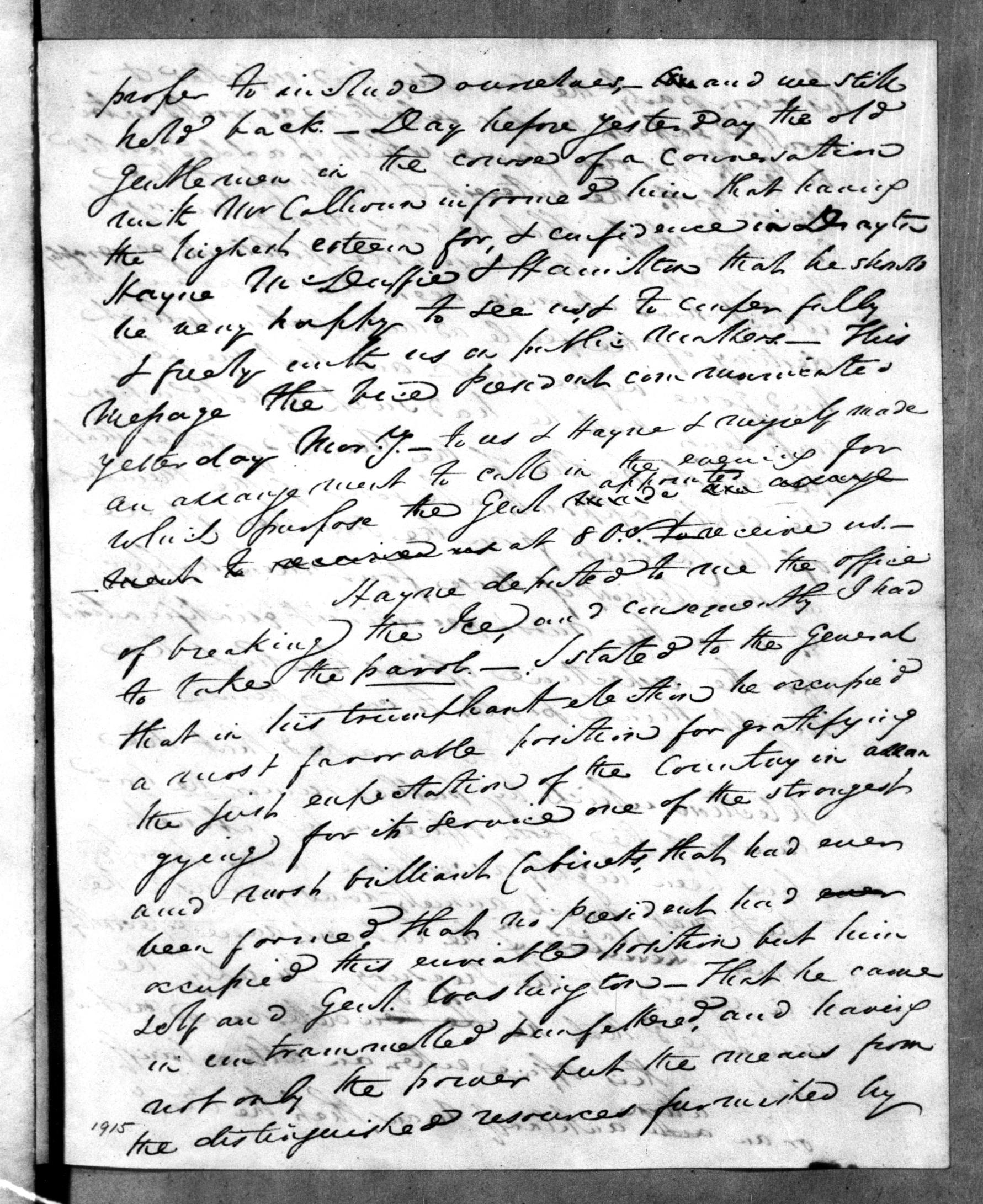 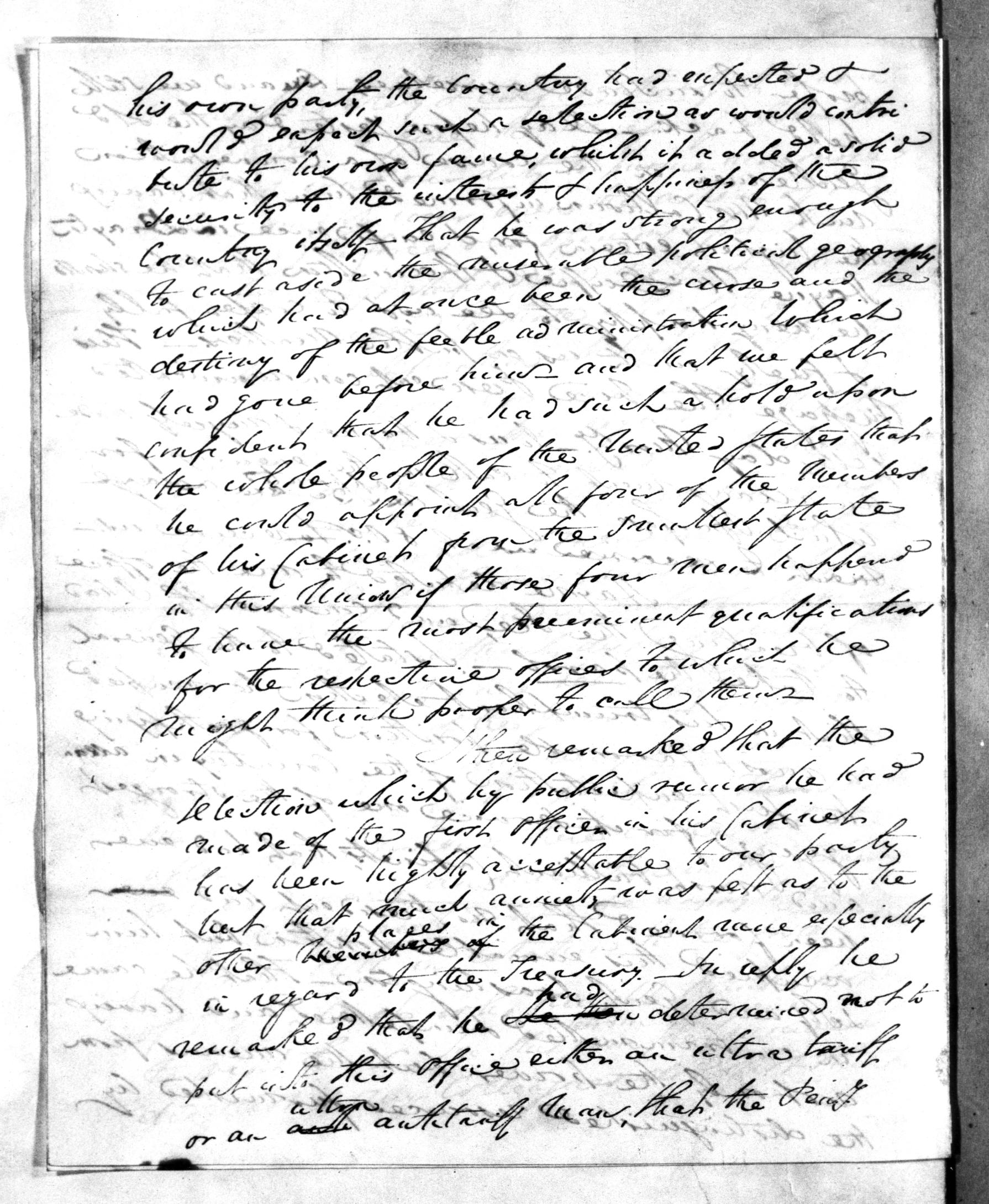 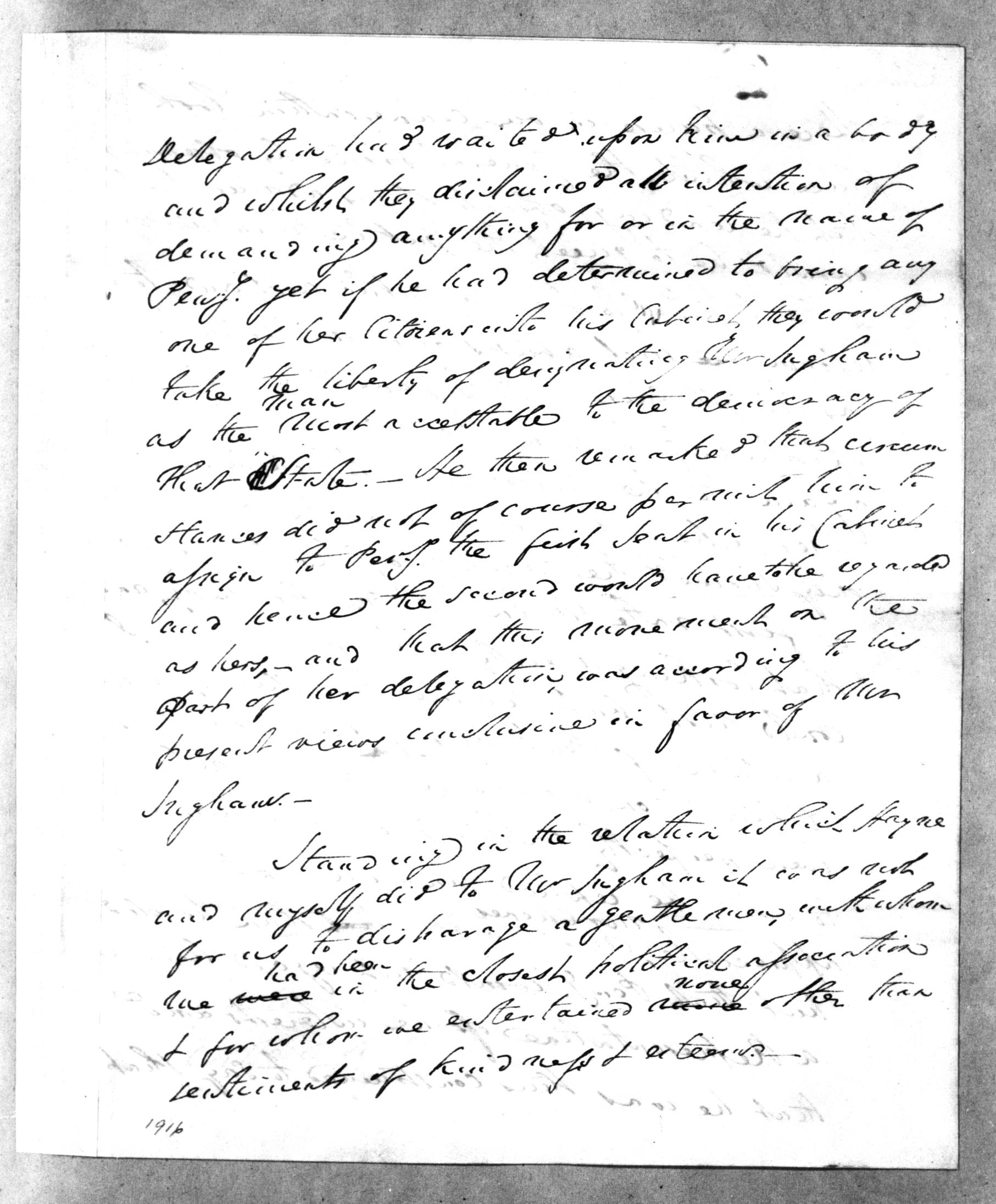 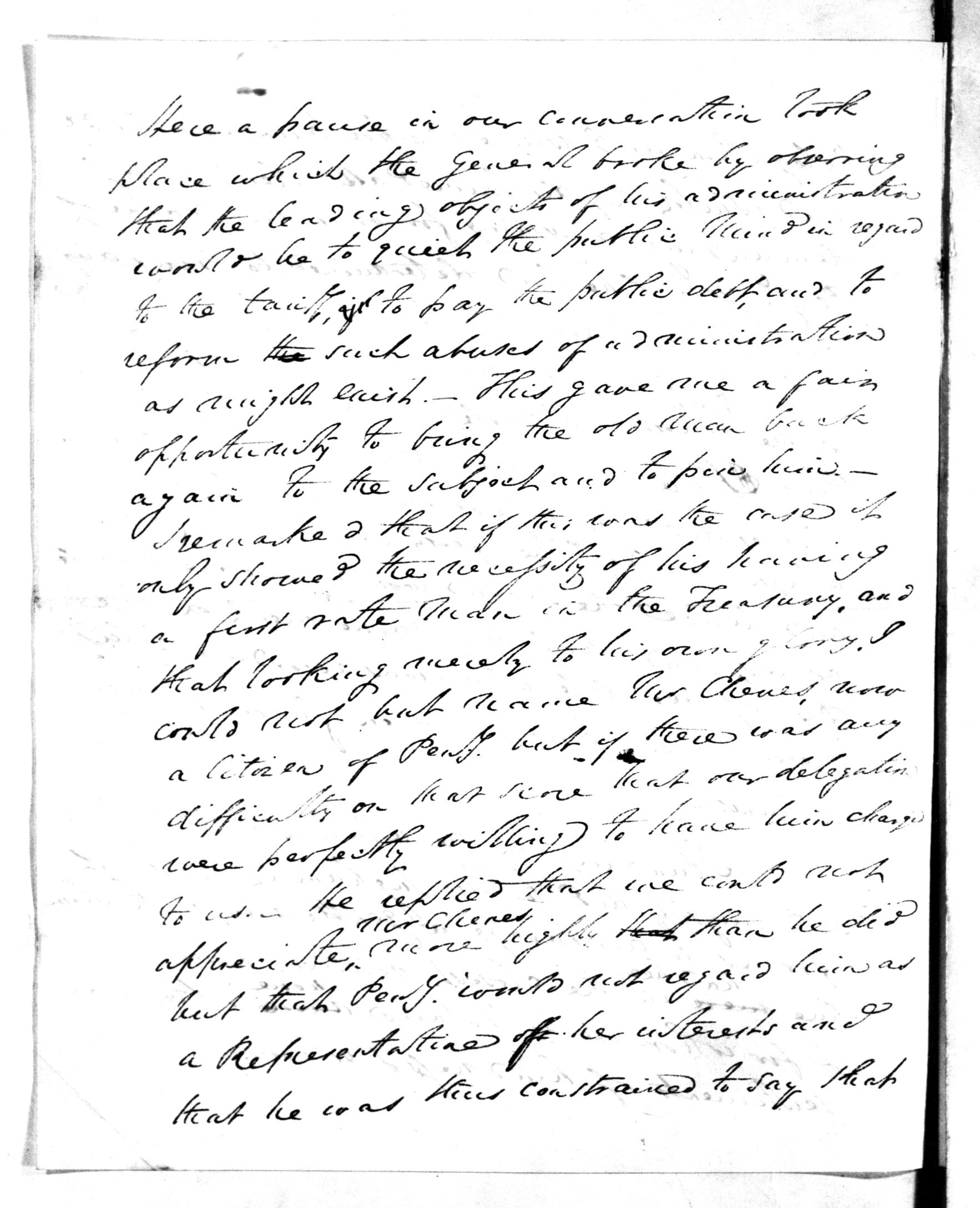 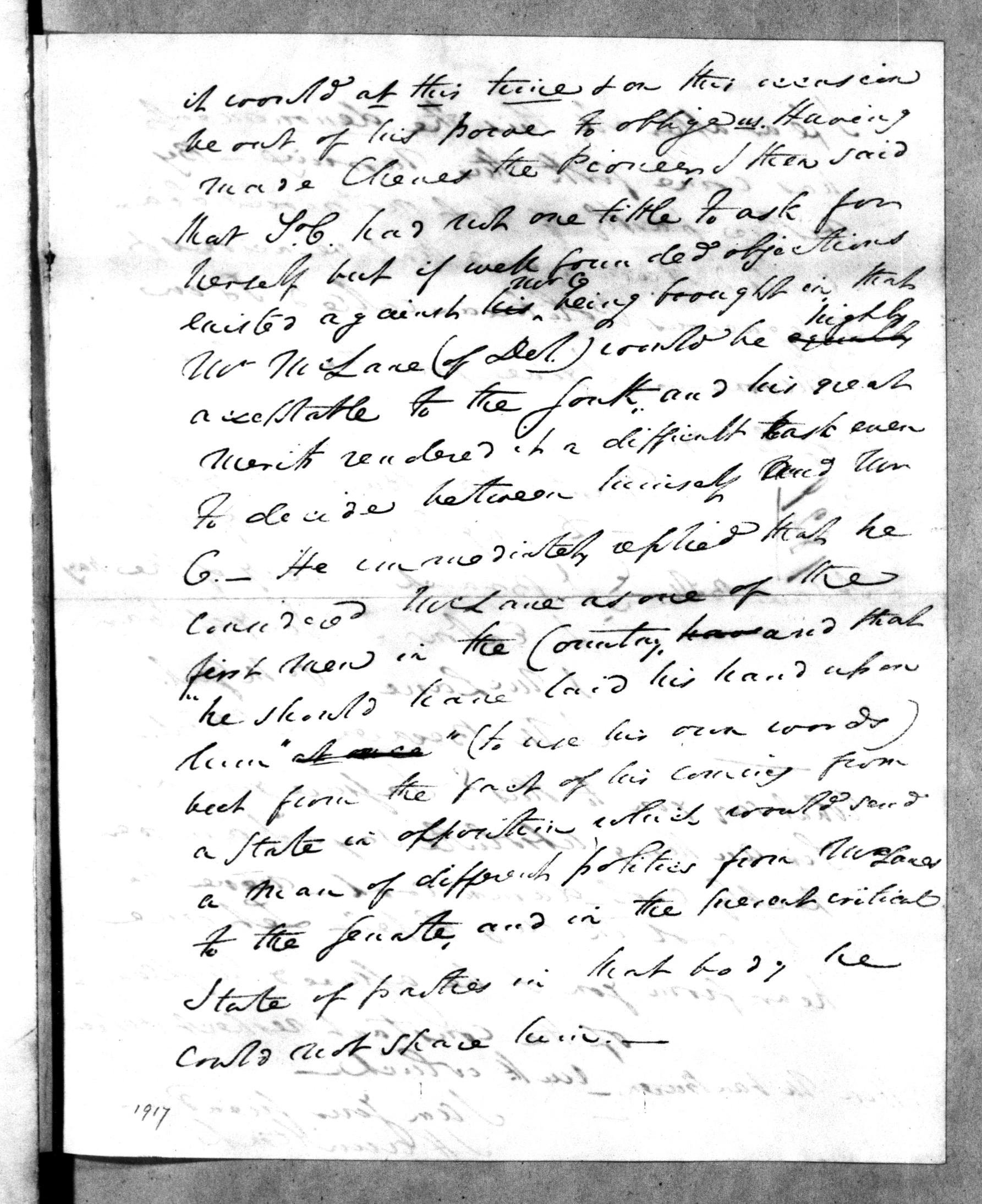 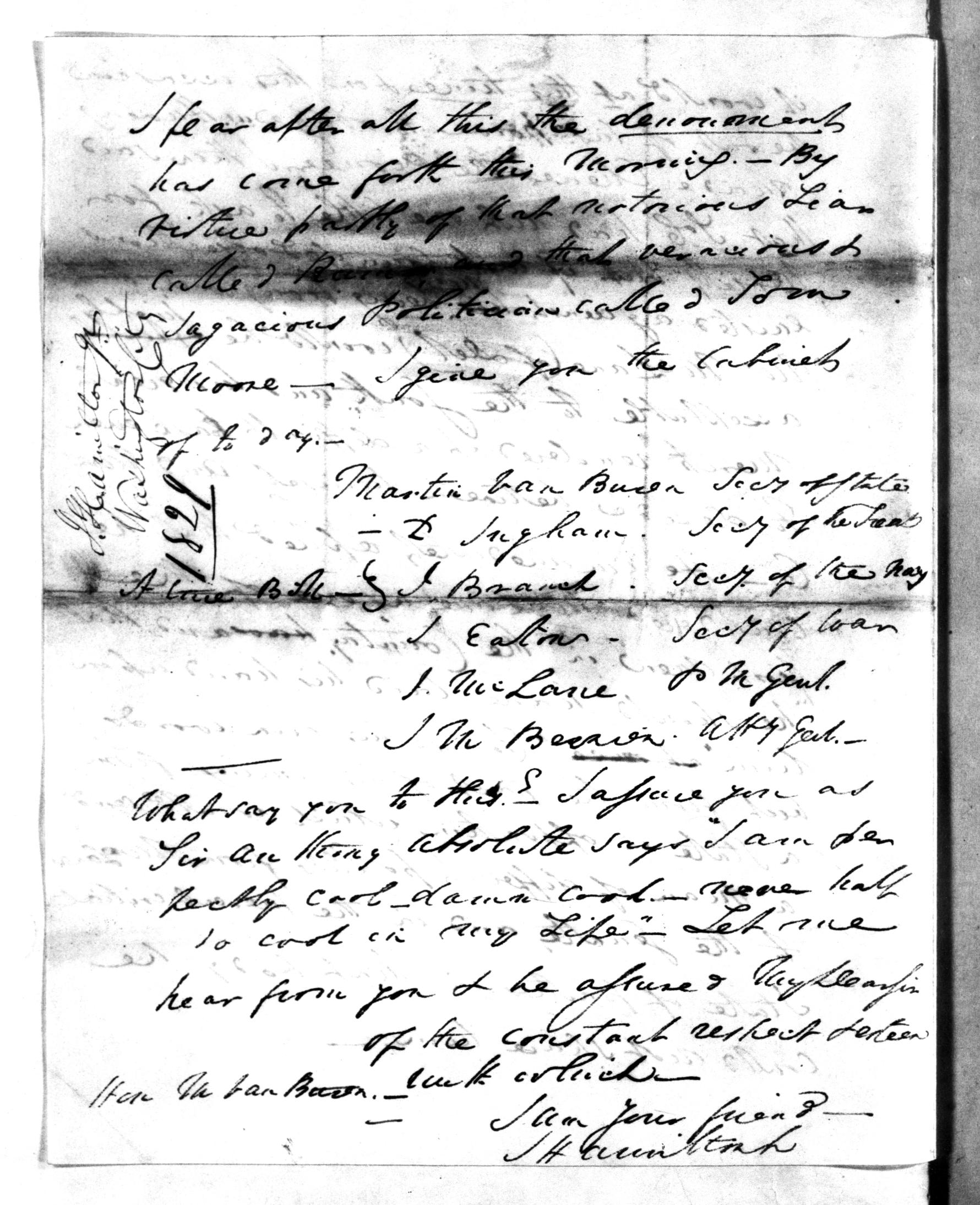