In breaking the seal of a Letter postmarked Albany which I received a few Days since I need not assure you with what delight I recognized your autograph, nor of the still greater gratification I derived from the perusal of its contents.

To find a friendship which I ardently and sincerely cherish so kindly reciprocated, by an individual who has grown gradually but ^and hence^ firmly on my confidence & attachment, is I assure you some sort of compensation for those too ^tran^sitory & valueless associations that ^which^ are <founded>, with little consideration and disrupted with still less regret in our painful progress thr’o life. It is probable that our very dissimilar destinies, may prevent our meeting often (for I go home to perform with cheerfulness those duties towards my Children which no body else can perform for them) yet you will not have in this whole Union a man ^who^ in your success happiness and <Reward> feels a livelier interest than myself success and, and for reasons infinitely more influential than any political affinities whatsoever for the simple cause ^motive^ because I like you and wish you well, and because my attachment ^is founded^ on a thorough conviction of your fidelity & honor, and an entire knowledge of that kindness & benevolence of heart & generosity of Spirit, which <are> favored you to be loved by all those, who have shared your intimacy and have enjoyed the favor of your friendship. This you will take as my Confession faith, and in proof of my sincerity I assure you that to whatever extremities we may in future peradventure be driven in our opposite opinions of^n^ the Tariff, & the measures which are likely in the progress of this Union to grow out of it, not one jot of my personal kindness shall be struck off in the most heated collision. It is promising much to be sure but my Heart tells me that I shall be able to keep my faith.

After the receipt your Letter I sought our friend McLane and invited by my own candor (I hope) and sincere regard for him ^into^ a free & unreserved conference. And I think I left him well satisfied of in ^in^ both particulars. I have never wavered for an instance in the strong inclination which I have universally expressed that Genl. Jackson should bring him into his Cabinet, and to accomplish this my efforts shall be zealously directed. I will however have no reserves with you, and in a few words give you a project of a Cabinet, which I now support by a free expression of my own opinions & which I will urge with proper deference but unwavering zeal upon the General if he allows me the privilege of conversing with him on the subject.

First and foremost I shall go for you as Secretary Of State against the Field. I am happy to say that I have not spoken to men of our party North South East or West, to whom your name has not been eminently acceptable. Your popularity is therefore undoubted, if not unrivaled in our entire party ^entire Phalanx^.

—McLane of Del. for the Navy Dept.

—McLane of Ohio for the War.

Ingham P.M. Genl. and either <Baily> of Kentucky Barbour of Vir. or Woodbury of N.H. atty Genl. This I believe would be the strongest Cabinet which the old man could call to his aid ^and^ if he was to ransack the whole Country from New Brunswick to the <Texas> <&> ^<he>^ would ^<not>^ <attempt> ^he could not find men having^ so much of the public confidence, though he would start from the jump with the most auspicious tokens of popularity and success. We have however many hazards to encounter and not the least of them is that the old man may fall into the hands of small men with narrow & interested views and think ^who will^ endeavour to impress upon ^him^ that gratitude for <Pred’y>. should even surpass what is due to the rest of his Country. If he throws up ^himself^ upon his party there, he throws himself it is true on a large physical mass but upon very little Talent, & still less of that high character, by which the Executive of our Country should be supported. Baldwin will I believe be pressed upon the Genl. with much earnestness & probably some other individuals of a similar stamp & impress. What will the old gentleman's course I know not, altho my confidence in his sagacity & honor induce me to hope that he will seek the counsels & confidence of those Men of his party who have not only staked much on the issue, & ^but^ personally derive little from it for themselves. My great reliance is on White, of Tensse. I hope he will induce the Genl. to look well before he leaps, & inform him accurately of his danger. With Judge White my communications shall be full & unreserved, & if the Genl. thinks me of sufficient confidence ^consequence^ to invite me into his counsels, I shall ^will^ give him my opinions of men & things with the most entire disregard of the consideration of whom may be displeased. I shall tell him frankly what I believe to be both policy & honor, to call Men of high character having the public confidence to his aid, & not to cater for a miserable ale house or what is worse Whiskey House popularity by which the triumph of his enemies will be compleat, in the worst verification of the worst of their predictions—his natural affinity with vulgarity & ignorance. You shall be apprised of the progress of events, that you may be on your guard, how you consent to quit your present distinguished station without knowing the Men with whom you are to be associated. We expect the Genl. on the 10th Feby as he left Nashville last Tuesday or last Weday. You shall hear from me often as interesting events develope themselves, & never without the undeviating esteem & attachment with which

I am My Dear Sir

P.S. I forgot to tell you with which ^how^ much pleasure I have read your able & excellent Message. I enclose you a strip taken out of a Charleston Paper. 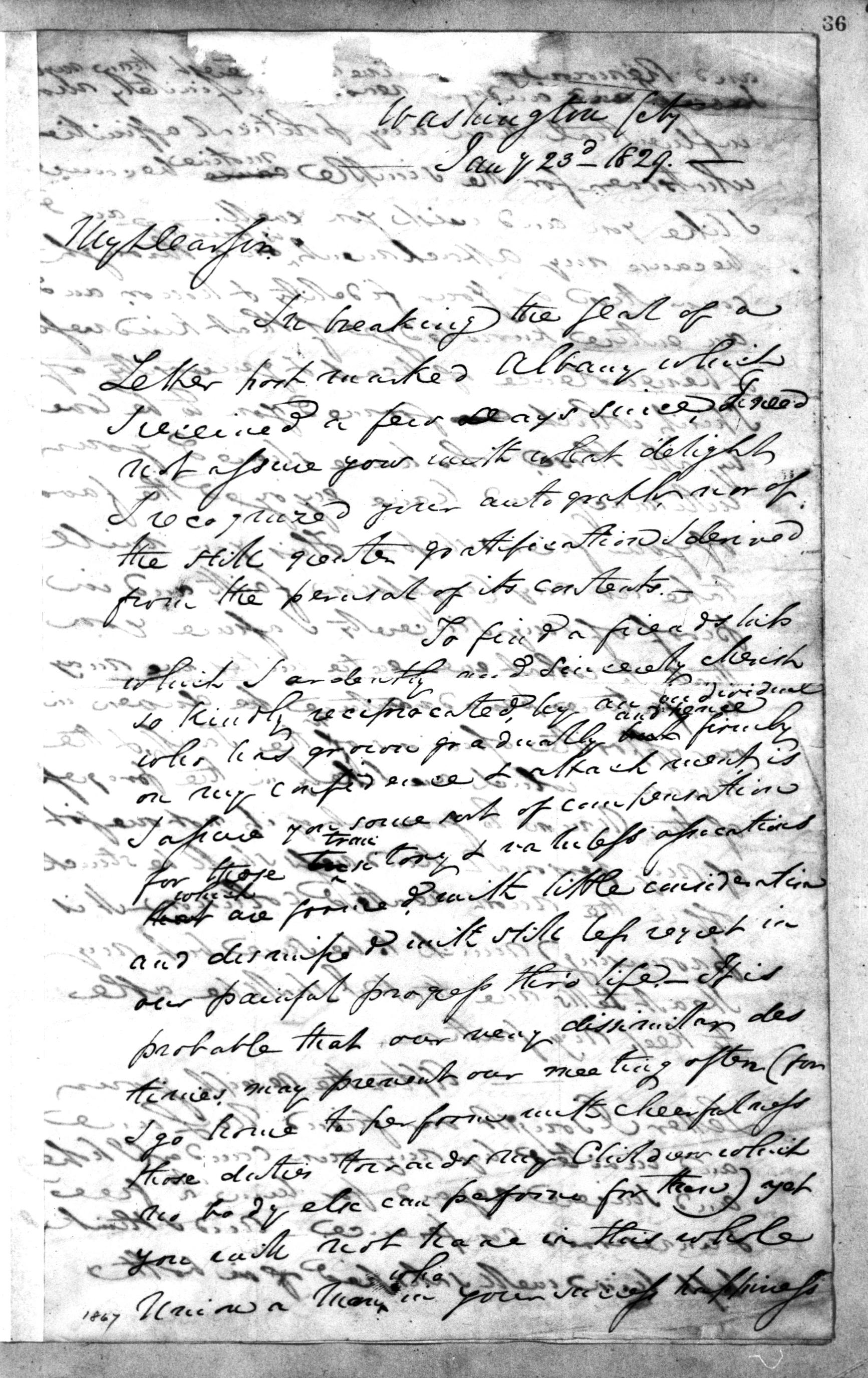 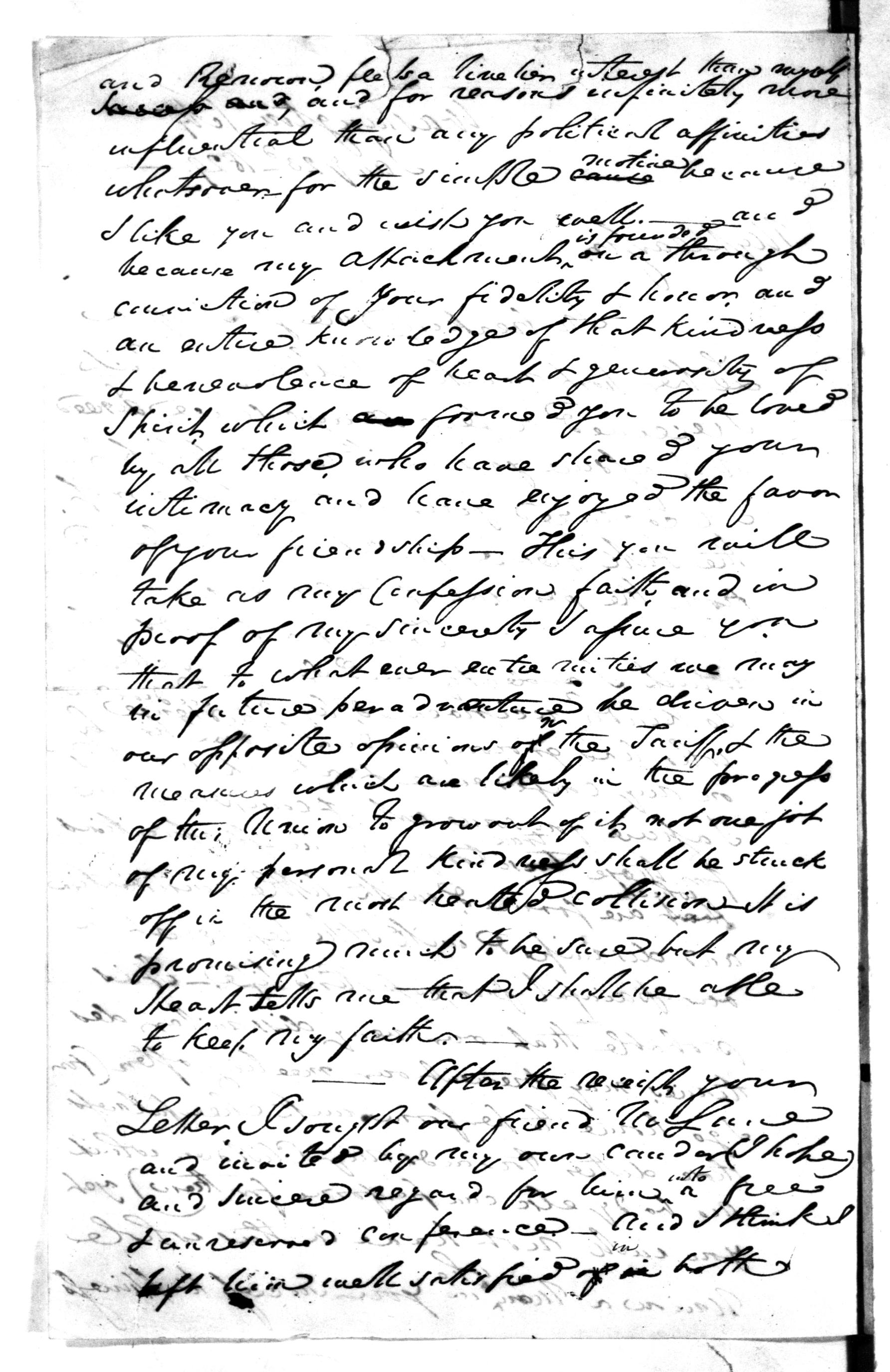 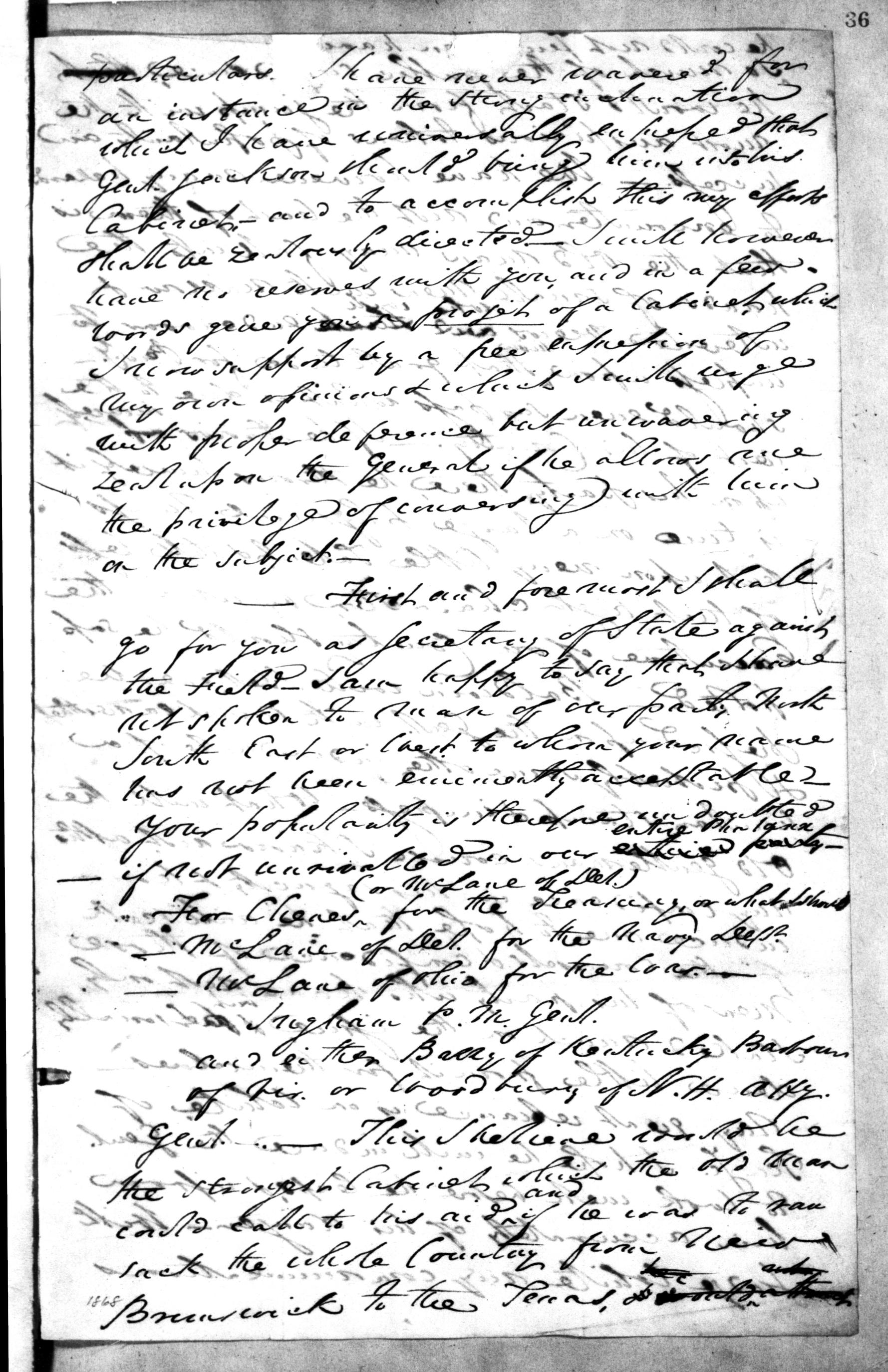 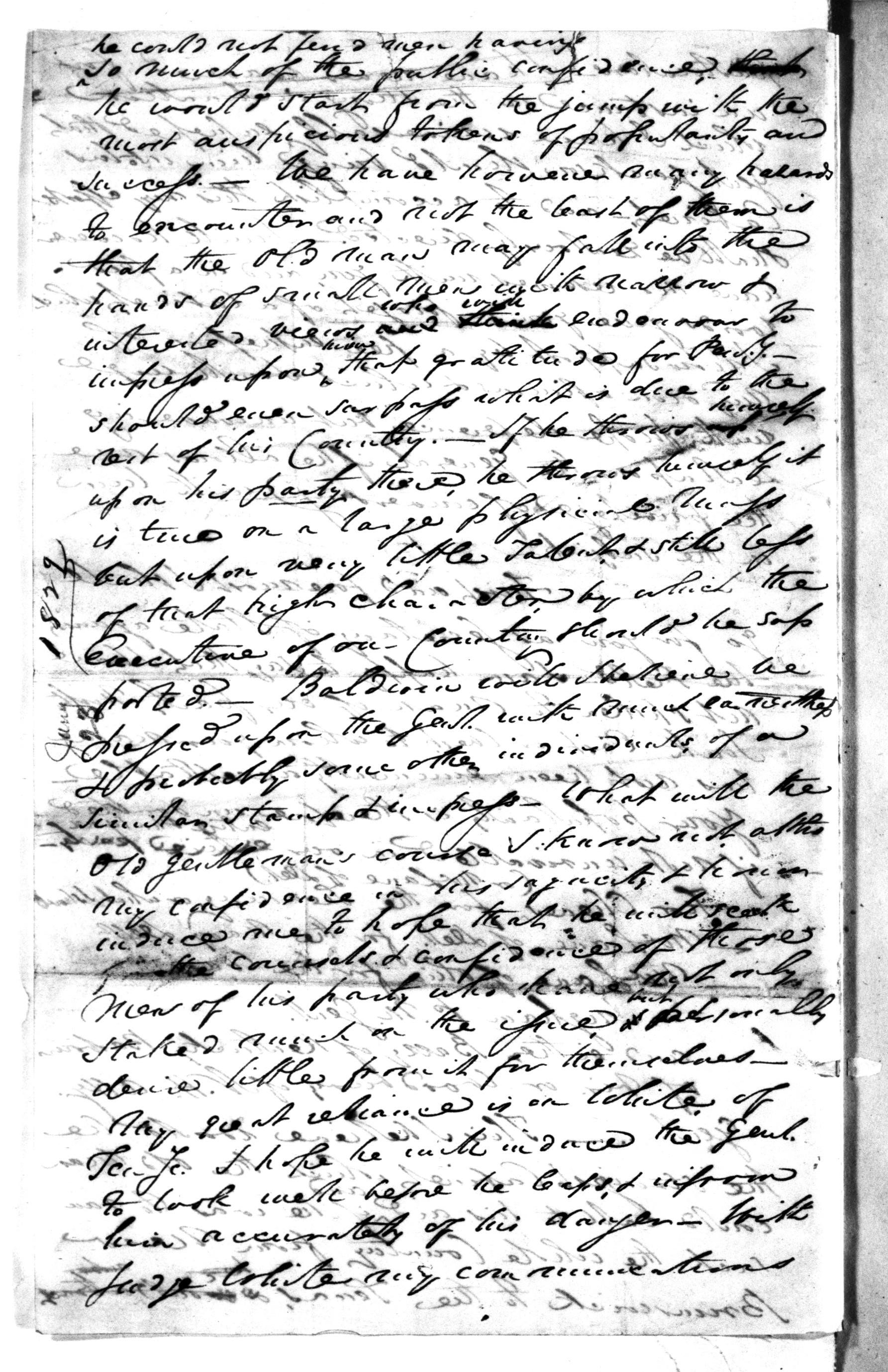 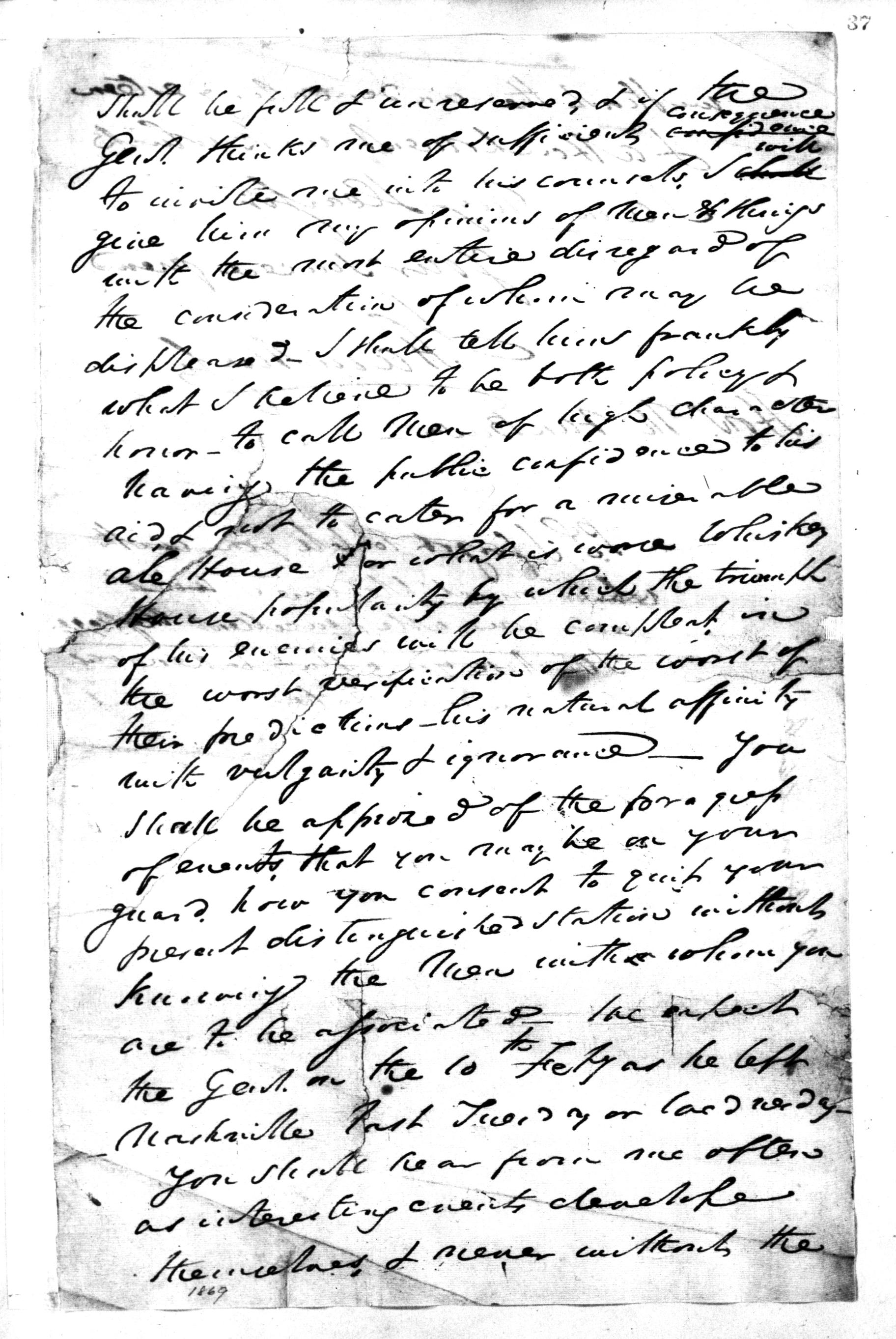