You rogue you. You have put me in a peck of trouble. Throughout my dominions, the story is that I am to be married to Mrs. O. S. in a few weeks & all upon your authority, said to be a positive communication from you to Mr Coleman, from him to David B Ogden & from him, of course to the world. If Gen. Jackson has any regard for me I hope he will let me try and execute you under the <seccond> section & I shall ask no farther favour from him. I thank you Kindly for your letter. It shall go in mitigation of your punishment & if you speedily give me a detailed account of all the sayings & doings of Washington as well in the female as political departments I <will> may forgive you for <bringing> all the young & old & middle aged women in this vicinity & state upon my bark. Say to McLane that I have heard rumours of the great difficulties he has had to encounter upon the subject of quarters & that as soon as his mind is composed enough I hope to hear from him. I would have given a trifle to have seen him cooped up in that Barn of a house of old Major Wheaton. Remember me most kindly to Col Drayton. Tell him I hope he will keep you in order. As to Mr Rives & particularly Mrs. Rives what shall I say. I will not believe ^in^ your good fortune as to the latter until I know that she has actually arrived. In the mean time thank Mr Rives for his late letter & ask him to favour me in that way again. It would be superfluous to say how much I regard him. One word to Mrs. <illegible>. If she has any sense of shame left she will make me a suitable acknowledgment for remaining several hours under the same roof with me without causing me to be informed of it. The moment I heard of her arrival I went in pursuit but the bird had flown. If you see Calvert remember me to him & tell the fair Eugenia Mott if you & she do not make a match this winter I shall throw myself at her feet as I am thereafter as my public avocations will allow. My next letter may be more grave & more suitable to my coming dignity and your magnificence.

P.S. I have been honored with visits from Gov Yates, Judge Woodward & Genl Root this morng. which would make me the best Senator.

My son Abrm. is anxious to be removed from Chicago to Niagaira & if it is consistent I wish it may be done. Will you have the goodness to speak to Genl. Macomb upon the subject? 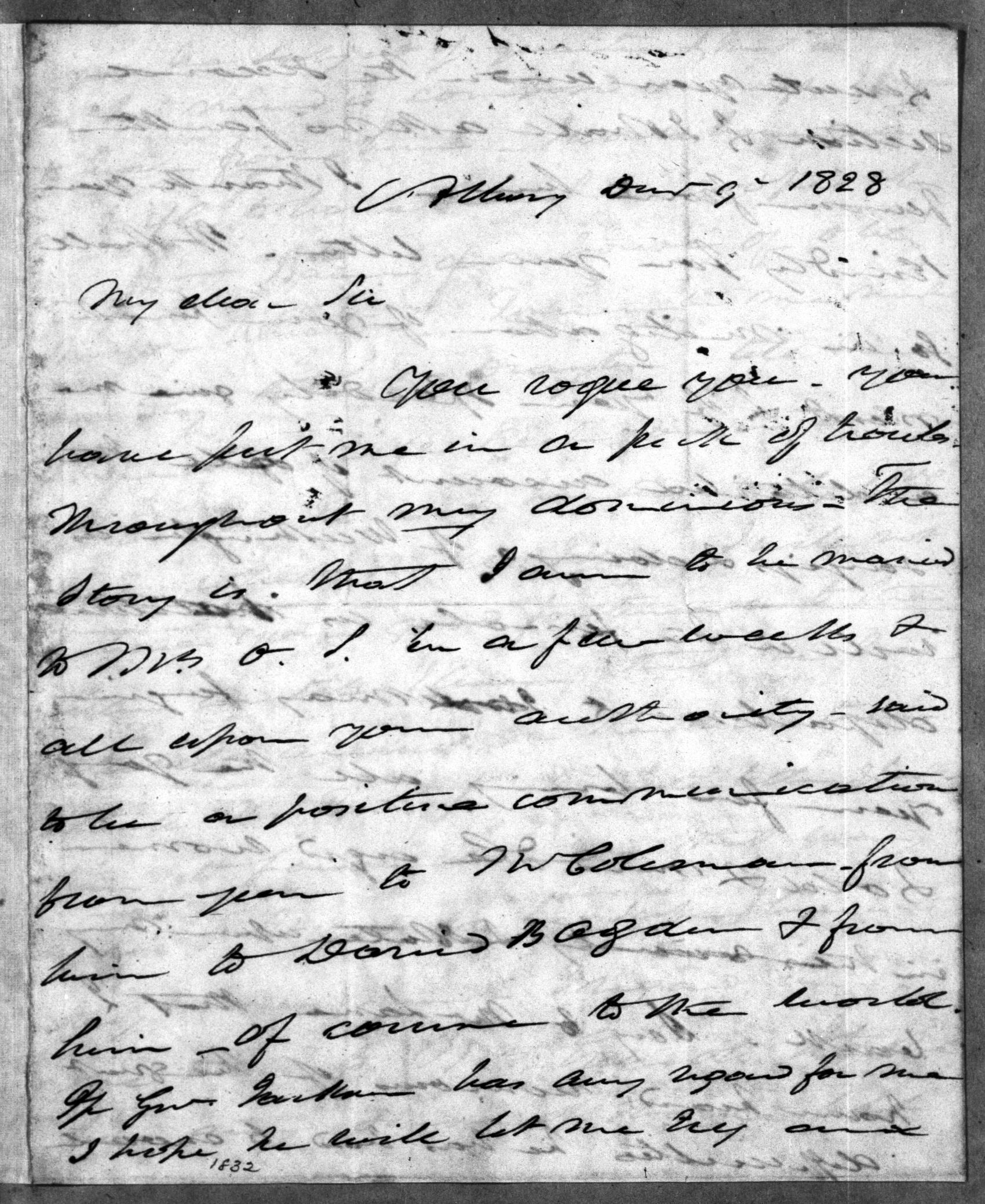 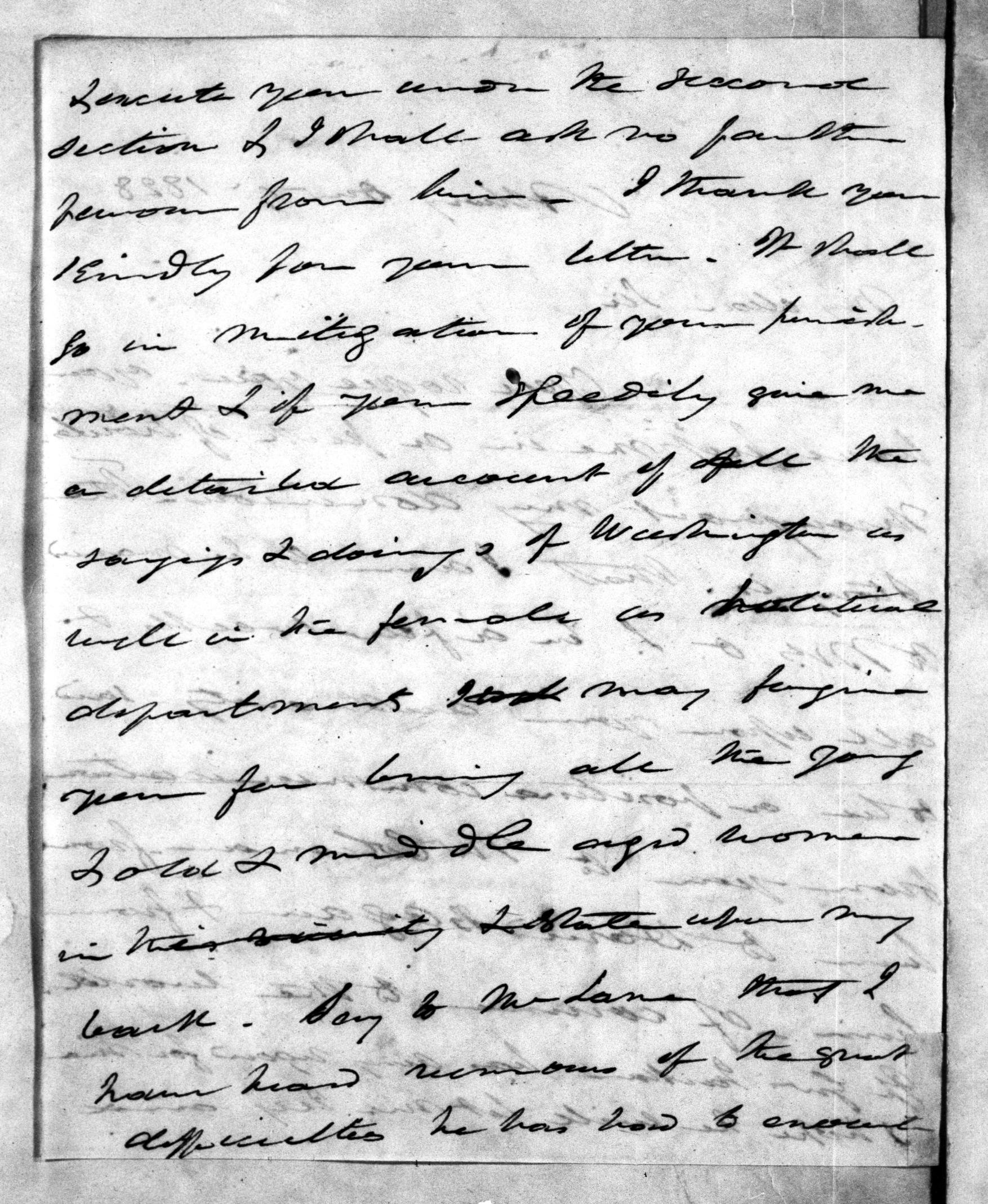 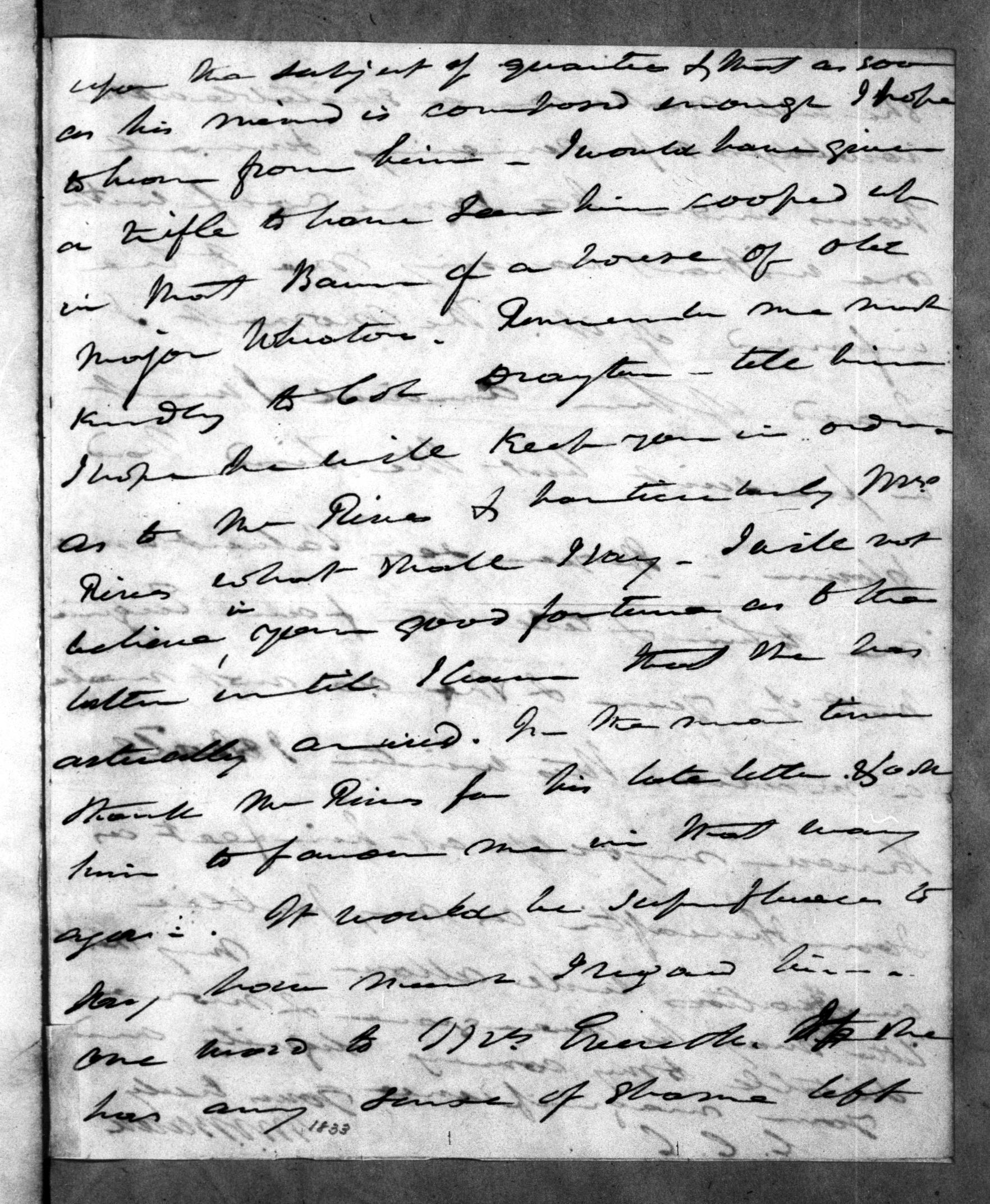 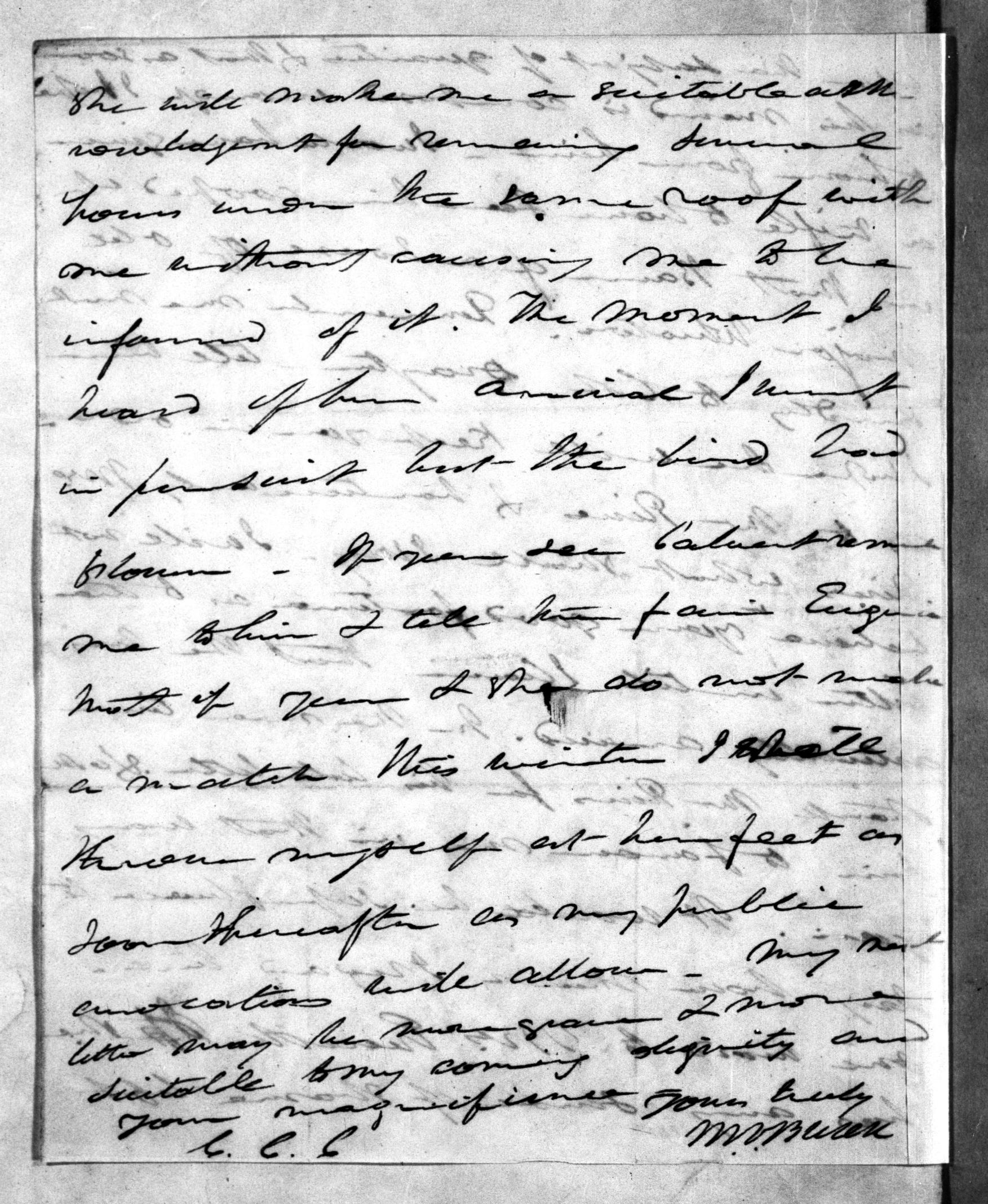 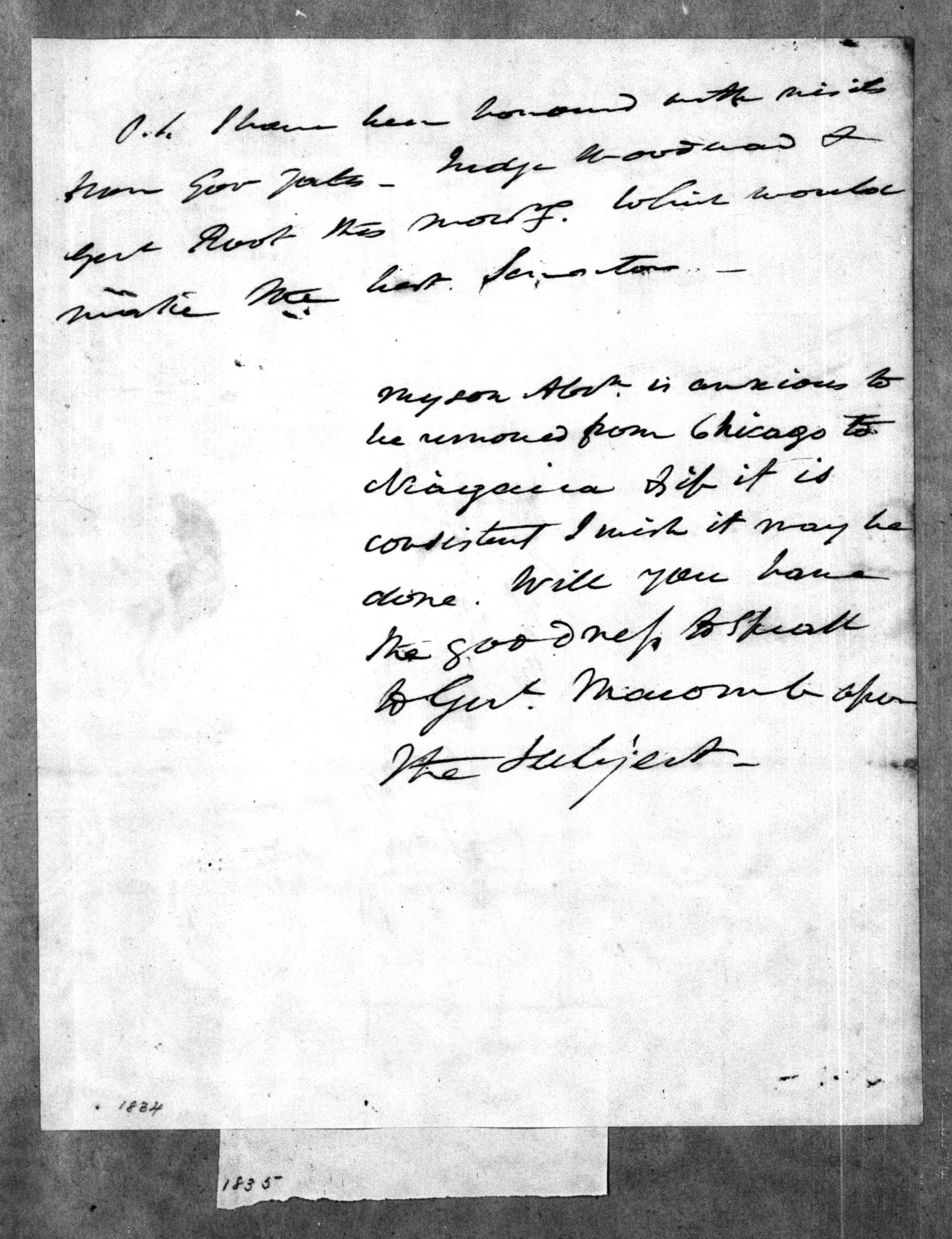