Your letter dated 28th ultimo was received this day two weeks ago; but owing to severe indisposition I have not been able to do myself the pleasure of acknowledging its receipt. The letter you enclosed me, addressed to our old friend, was forwarded to him the day of its receipt.

Your views of the subject upon which I wrote you, accord with my own. Indeed the more reflecting part of the Genl’s friends here had become so well satisfied of the impropriety of the measure, that the project had been abandoned, before the receipt of your letter, as injudicious and hazardous; and they were highly gratified to learn that their opinions were sanctioned by the views you had taken upon ^of^ the subject. It was thought by those who were in favour of such a course, that the Burr affair would afford a suitable occasion, as it was believed that was the last and principal charge upon which our adversaries meant to rely with the hope of defeating the General’s election. But instead of his taking any notice of that charge, it was determined here that it would, perhaps, be right and proper for our committee to reply to it. I do not know that even an expose by the Nashville committee was necessary; but in as much as we had the materials which would enable us to put that matter to rest as we believed, it was thought advisable to do so, and particularly as we were informed by our friends in Virginia, Kentucky, Indiana, & Illinois that it was doing the Genl. some injury in those states. I directed ^a copy of^ the report to be sent to you & my friend Mr. Bunner, which I hope you have recevd. before this.

We have been equally disappointed in the result of the elections in the Western states. At one time, I must confess, I felt alarmed at the extraordinary exertions that were made to corrupt, deceive, and mislead the people by the supporters of Adams & Clay; but they have proved themselves too virtuous to be corrupted, and too intelligent to be hoodwinked. I do not now believe that Mr. Adams will get a single vote on this side of the mountain. The only states now that his ^friends^ can pretend to claim are Ohio, Kentucky & Louisiana, neither of which I think he will get. The only state of which I think there is any doubt, is Kentucky; and our friends there, in their private letters, assure us that state will go for Jackson, but to be candid with you I have very little faith in Kentucky politics. There can now be no doubt of Genl. Jacksons election, by a large majority of the electoral votes. Clay himself, it would seem, has given up the contest, from his not travelling thro' Ohio and your state as originally intended. The few [fr]iends he has here, and his connections in this state, have given up the Ghost.

The Genl. was down to see me few days ago. He is in fine health and looks as well as I have seen him for many years. It is thought by some that his enemies will report him dead just before the election to prevent the people from voting for him. From his present state of health and appearance, I should think his chance to live twenty years as good as most peoples. I have no fears of his death; I believe Providence has prolonged his life, as a mean of conferring further signal benefits on his country. The Genl. desired me, when I wrote to you, to present his reports to you, & thank you for the information contained in your letter to him. 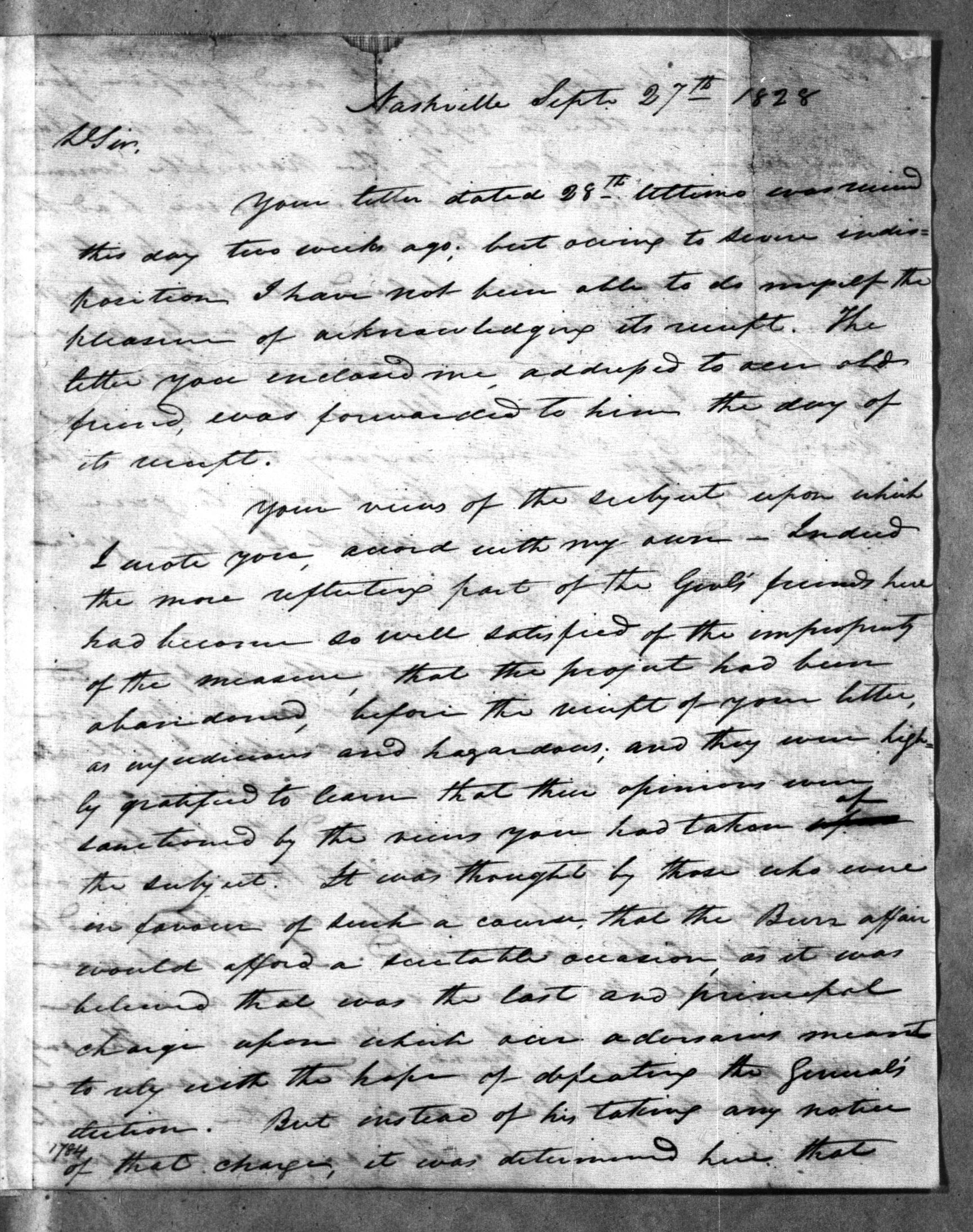 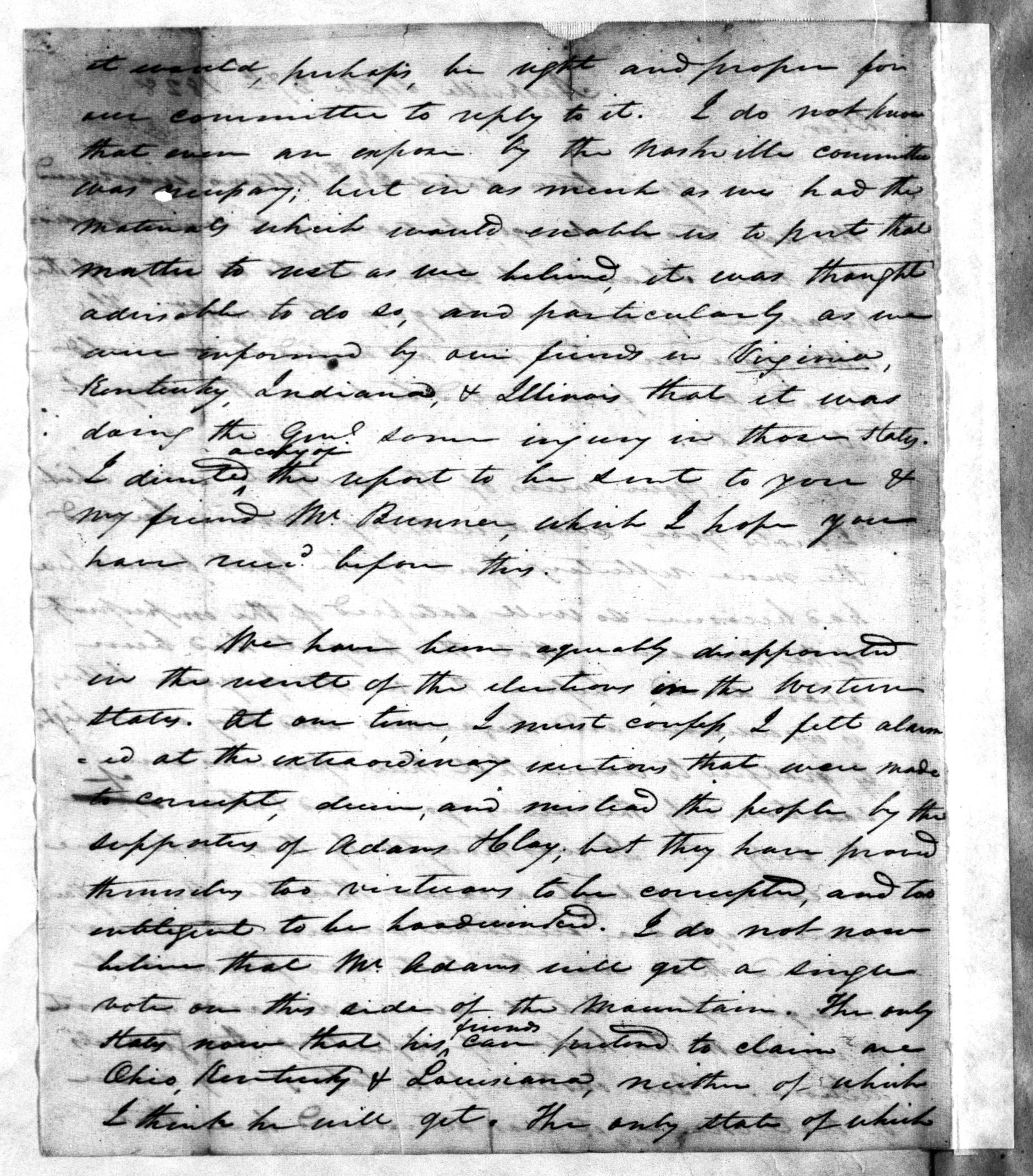 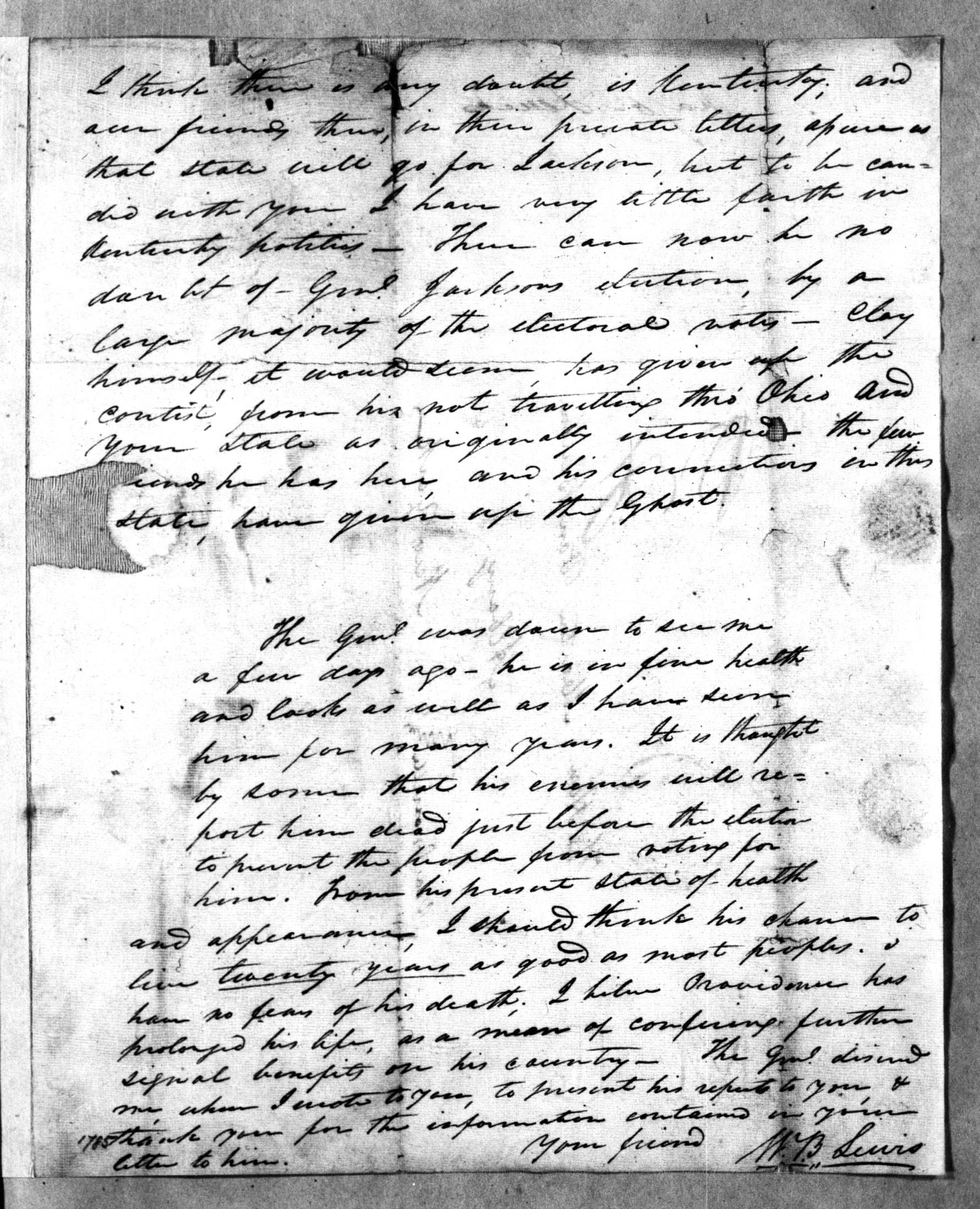 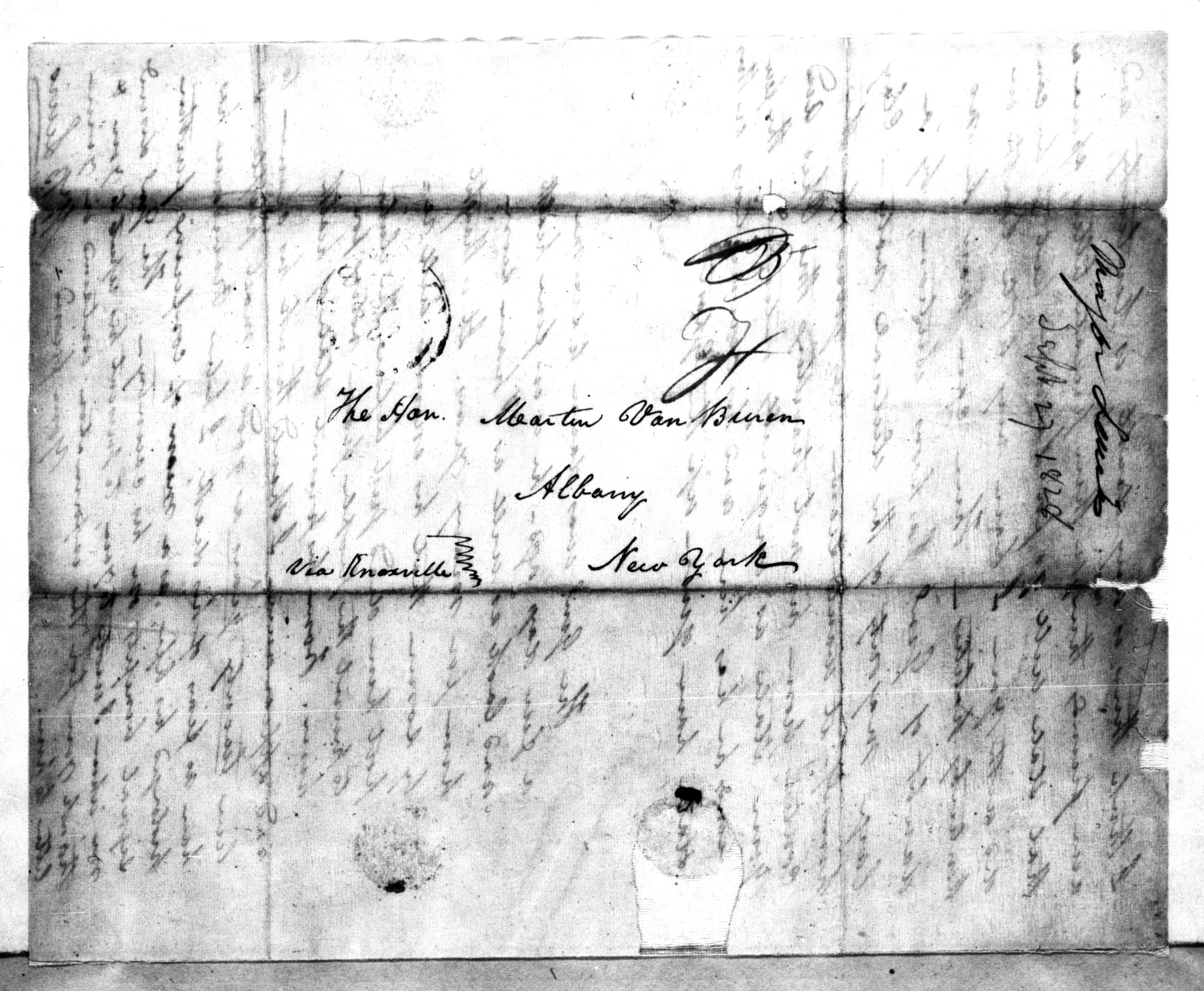