Some of Genl. Jackson’s ablest and most efficient friends here, are of opinion that it would be right for him to address the people of the United States, before the November elections, in reply to the most material of the numerous charges made against him by his enemies. They think a publication, in his own name in refutation of those charges, judiciously drawn up, and addressed to the good sense and feeling of the people, would have a most salutary and beneficial effect. The Genl. has not yet been consulted upon the propriety of such a course; nor has it been finally agreed on as right and proper by his friends. I have my doubts whether he will willingly consent, at this time, to make an appeal to the people, as ^it^ will seem to have the appearance of electioneering, a thing he has always strenuously avoided; but if his friends think it advisable, probably he may be prevailed on to do so. I consider it a step of some importance and entitled to serious consideration; before resolved on, therefore, I should like to have the opinions of some of our safest and most prominent friends in other states. Will you then be so good as to favour me with your frank and candid opinion upon this subject? Would his enemies, think you, be able to turn ^it^ to his disadvantage by alledging it was done more for political effect, than with any disposition to vindicate his reputation? And might it not be considered as letting himself down from the elevated ground he has thus far occupied by refusing to take any part, personally, in the great and all absorbing question which has for the last three or four years, agitated the nation? These are points upon which I should like to have your opinion. Should the Genl. come out with an address, I know he will be most furiously assailed; but they cannot say worse things of him than they have already said, and I think it quite probable that an explanation from him of those numerous false charges made against him by his enemies would have more weight with the people than explanations from any other source. If the course contemplated should be thought advisable, the address ought to be prepared, and ready for the press by the middle of next month, giving just time enough for it to circulate, generally, thro' the union before the election. If then we are to be benefitted by your counsel, you will see the necessity of losing no time in answering this communication.

Kentucky I fear has gone against us in the election for Governor, but that is not considered, here, a fair test of the strength of parties. The people of that state have not been able as yet to divest themselves of the feelings and prejudices of local politicks. Hundreds, nay thousands, of Genl. Jacksons old court friends, could not be prevailed on vote for Barry. His having been leader of the relief party, and chief Justice of the New Court, has made him odious to the old court party. Mr. Grundy, who has lately travelled through that state, assures me that Jackson will most unquestionably get its electoral vote. He informs me that his brother, who lives in Washington County, assured him that out of 200 voters in his neighbourhood that Adams could not possibly get more than seven, yet he said Mitcalf, the coalition candidate, would get at least 150 of them; this Mr. Grundy says is the case in many parts of the state, so that he thinks the election for Governor will be no test as to the presidential question; still he thinks it not at all improbable but that Barry is elected with all these odds against him.

Mr. Clay and his friends in Kentucky say that if Mitcalf shall be elected, it is to produce a wonderful reaction in every part of the Union. In other words it will settle the question as to the Presidency: That Ohio & New York will then certainly give in their adhesion to the Adams dynasty, and that even Pennsylvania will be loosened from her moorings and swing round to the side of the Administration. What say you, of New York, to this? Has Kentucky such powerful influence over the distances of your state as Mr. Clay and his friends boastingly assert? If she has, it would be well for the friends of the General to surrender at once—it is useless to counter. The presumption and unblushing impudence of these coalition gentry surpasses any thing I have ever before seen, or read of.

What effect will the torrents of abuse, falsehoods and slanderous, with which the whole country is inundated by the friends of Adams & Clay, have upon the character and popularity of Genl. Jackson in your state? It seems to me that it is almost impossible for him to escape uninjured from the combined, systematic, and powerful efforts now making to destroy him. Nothing short of a miracle can save him. If after the meeting of your Legislature, the aspect of affairs should require such a course, would the members be willing to take upon themselves the responsibility of appointing the Electors, so as to give the whole 36 votes to the genl.? This would settle the question at once. New York, Pennsylvania, Virginia, North & South Carolina, Georgia and Tennessee would be sufficient without another state. My dear Sir, Adams & Clay must be put down, or they will speedily put down the Liberties of this nation. If they can succeed in reelecting Mr. Adams in consequence of the power and influence they wield, and the corrupt means they employ, what’s to prevent them from electing Mr. Clay as Mr. Adam’s successor, and Mr. Webster as his? I answer nothing. If they can succeed in destroying Genl. Jackson by slander, defamation &c what's to prevent them from prostrating any other person who may stand in their way, by employing the same weapons? Nothing.

I do religiously believe, under existing circumstances, that the very salvation of our Government depends on the election of Genl. Jackson. Should he be elected a new order of things will succeed. Economy will be practiced and Republican simplicity become once more fashionable. The government will be administered by patriots and republicans, who will serve their country, for their country’s sake. In securing this blessing to the nation, much, nay I might say almost all, depend on the great and patriotic state of New York. I will not tax your patience longer. Accept my best wishes for your health & happiness and believe me to be 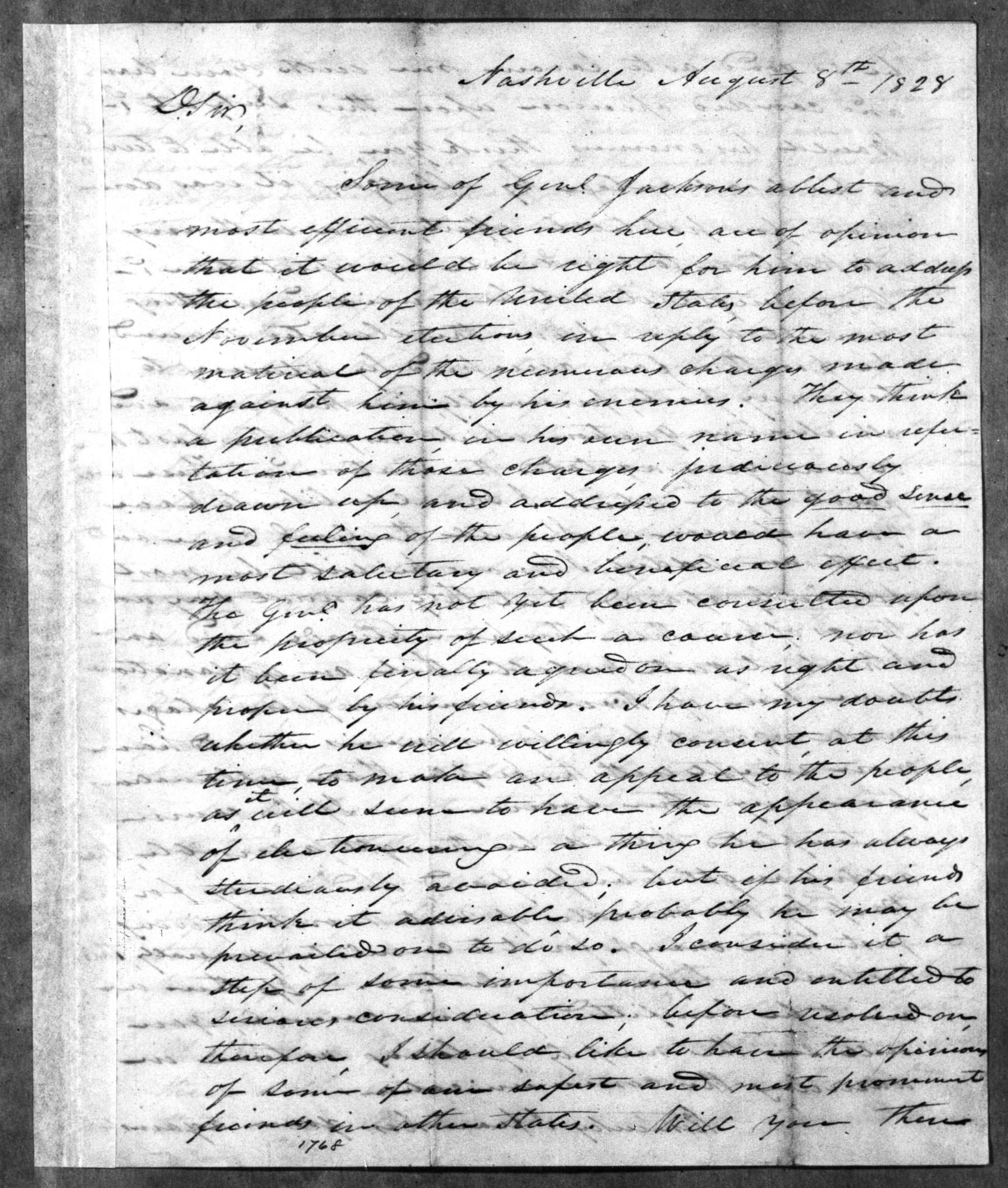 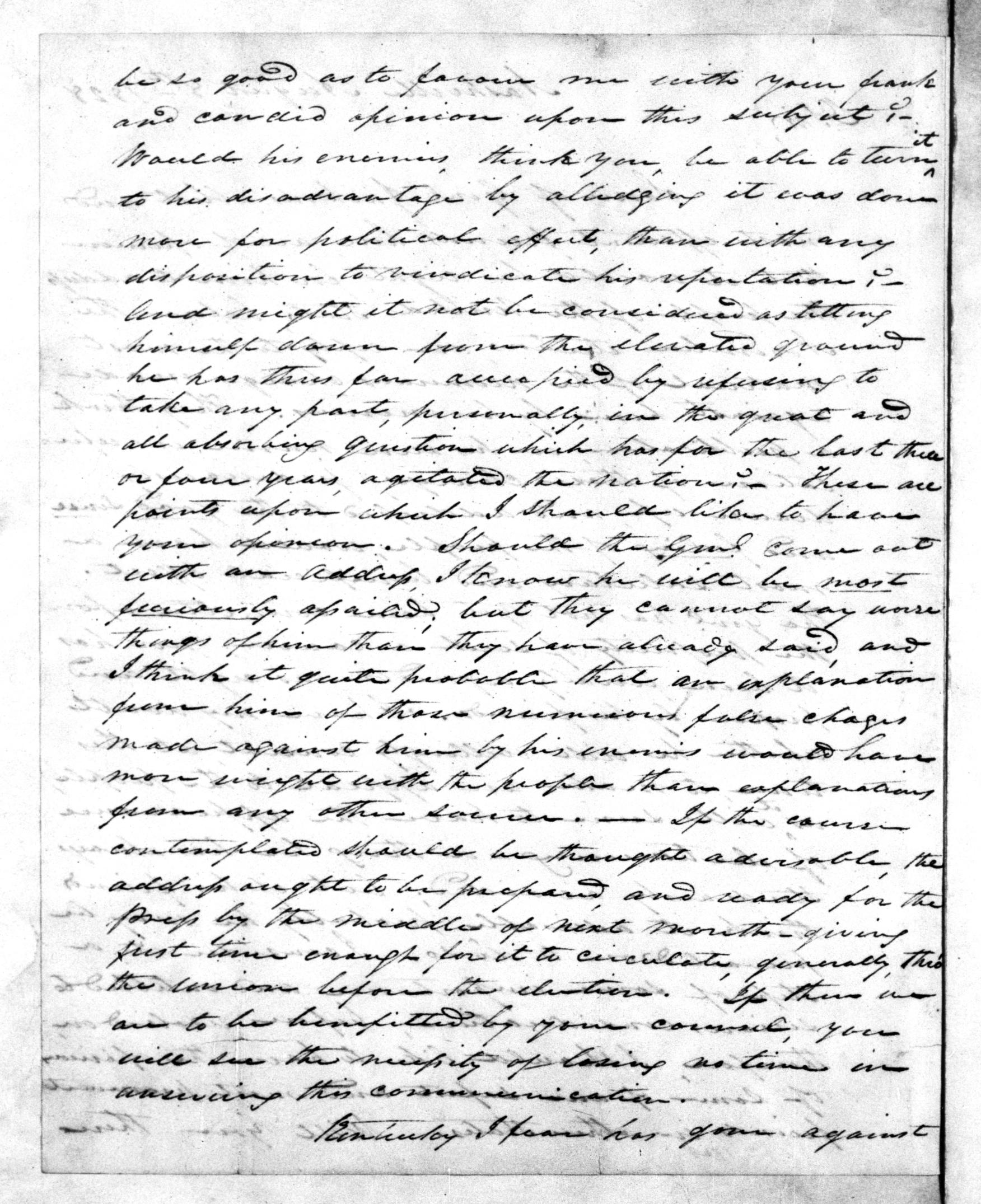 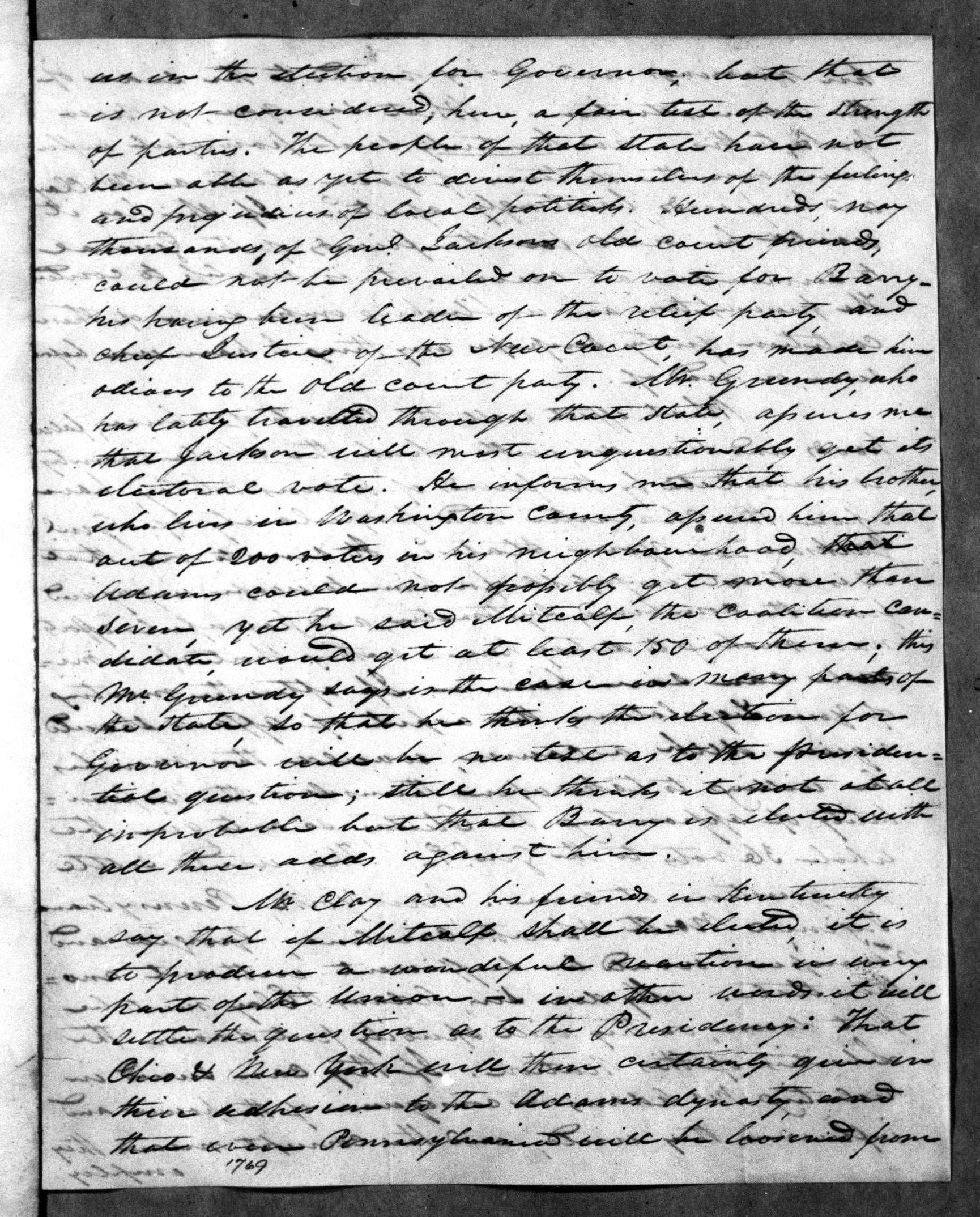 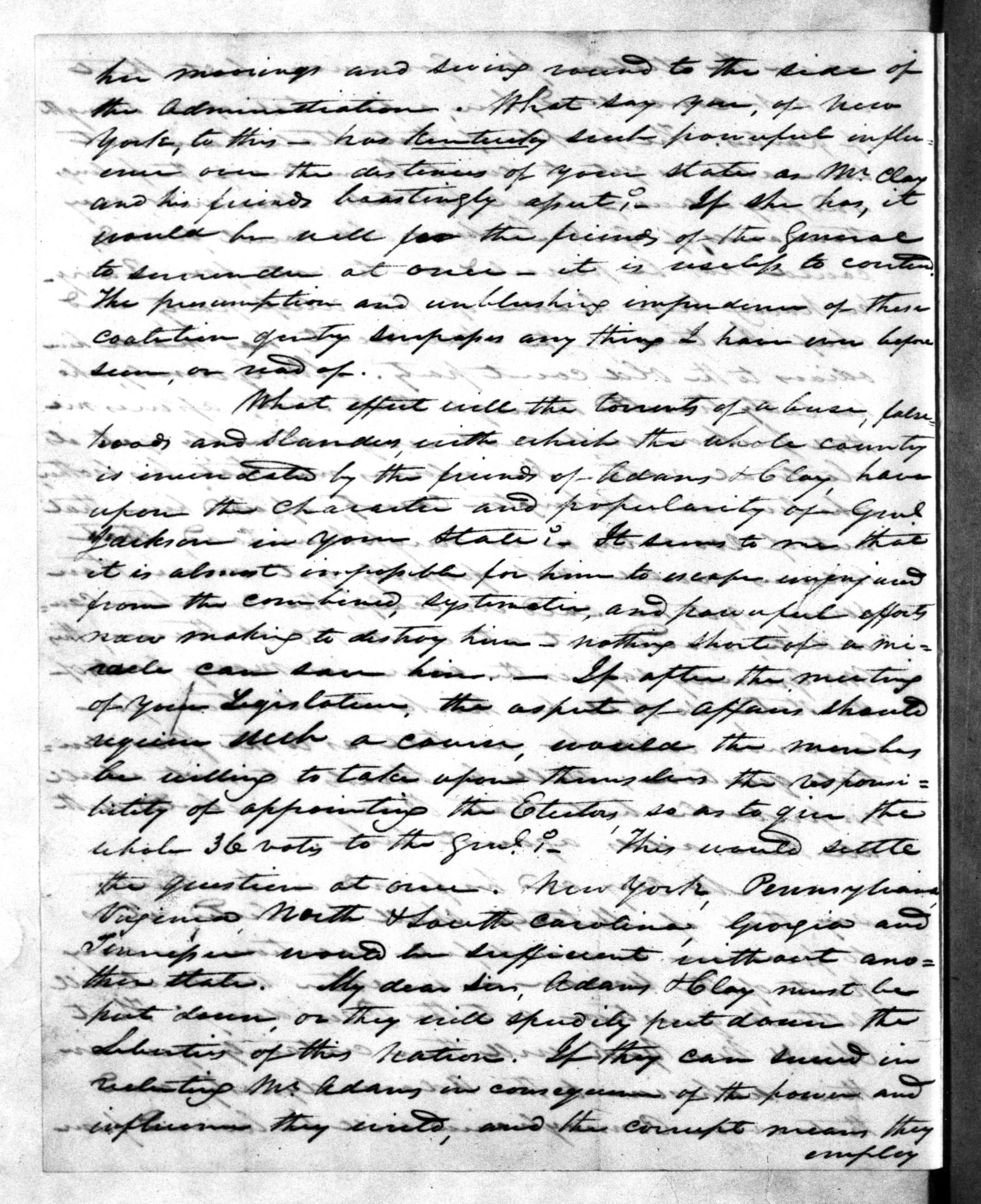 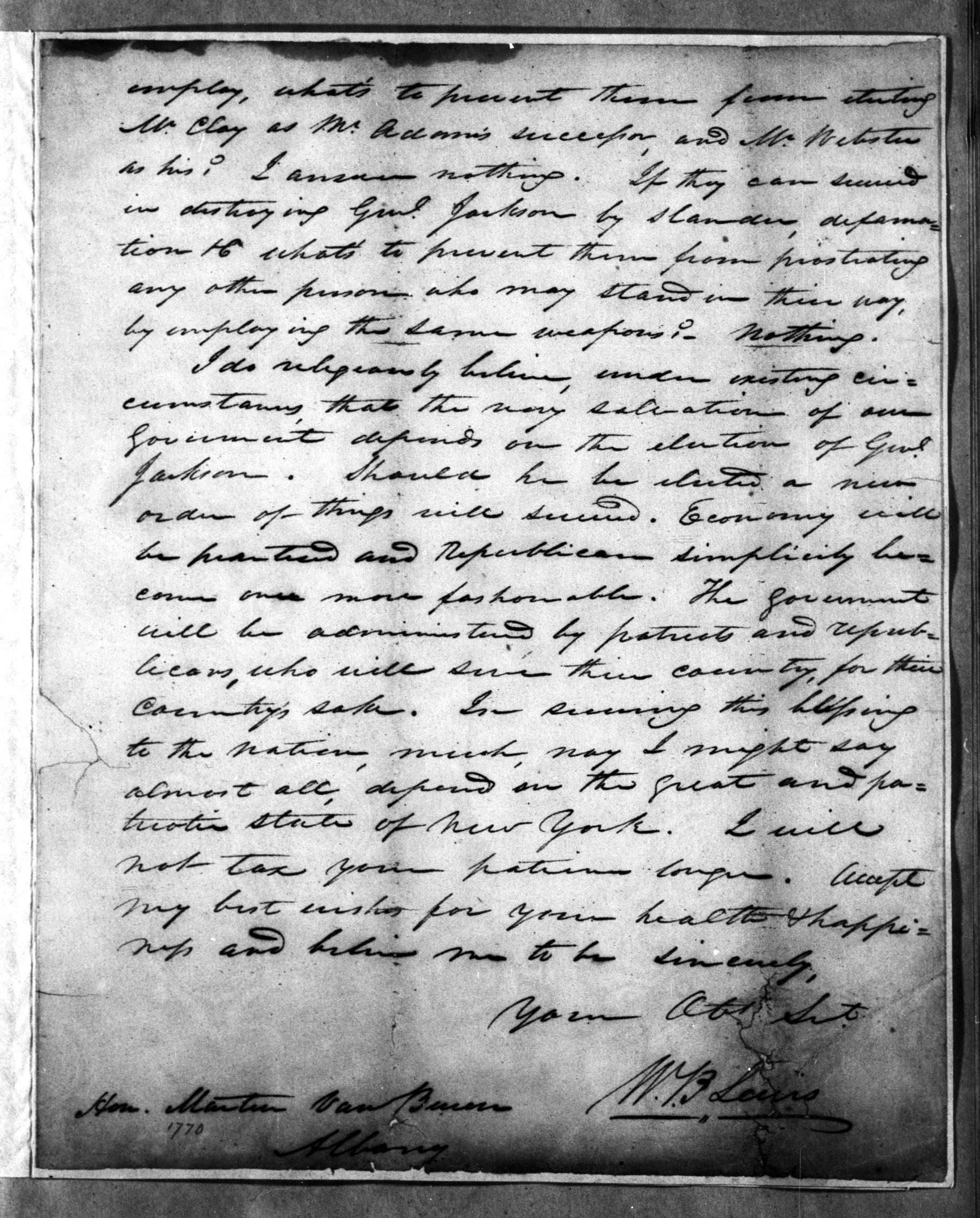 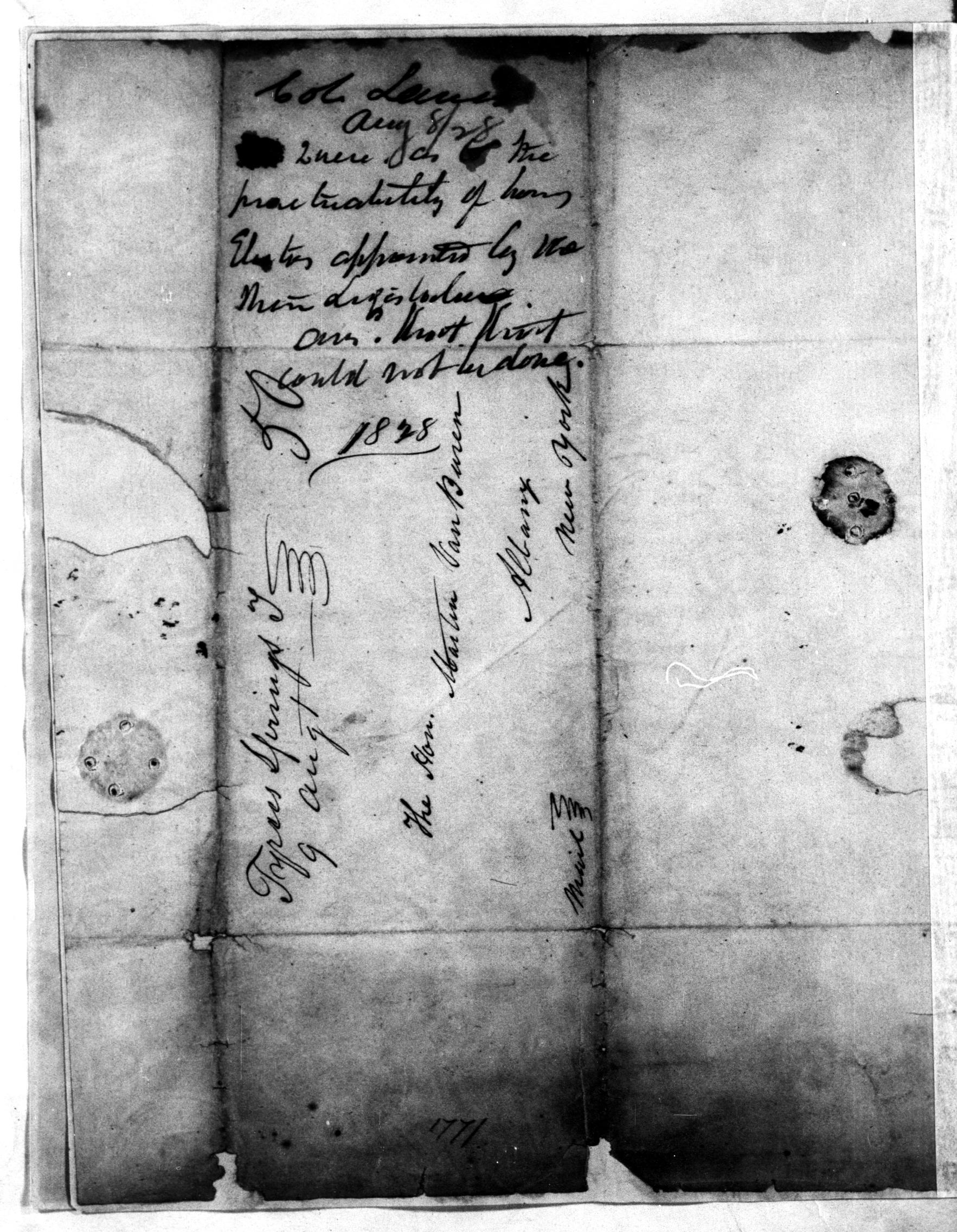