Dont fancy that you are about to be tuned with another long epistle on the tariff bill, no such object is intended. I have long since ceased to have any hopes that a tariff bill will pass this session, believing as I do the Adams party have determined to vote against any bill unless they could have the credit of passing it, and knowing the southern men would vote against any bill protecting the manufactures of this country; consequently I have long thought no bill would pass, and the only solicitude I have recently felt was that if the bill failed the saddle should be put on the right horse, and with this view, on my way to New York on board of the steam Boat, I wrote a line to Marcy to send a circular (written by Hopkins, that I left laying on my desk) confidentially to you and Mr Wright, with a history of its origen and fate, in which I had fully tested the sincerity of Tibbets Hopkins Dorr and others on the tariff question, and had brought them to agree to sign that circular. And after consulting their party at the committee room they refused; I requested Marcy to sign my name and to get some of our confidential friends to sign it also, that it might induce you and Wright to advise some such amendments, and thereby make it certain to throw the Blame of defeating the bill on our opponents, this circular I did not intend should go to any other person then yourself and Wright. I am now happy to see that such amendments have been adapted to the content that I wished, in the engrossed bill, and now let them vote against it if they dare; and I will answer for it that the people will know who have defeated it.

It seems that some fatality has attended me, in all that I have said or done in relation to this measure, my motives have been prevented and misunderstood by my friends and my foes. I have recd a long <illegible> and I must say <offensive> letter from <illegible> to <illegible> <illegible> I have also recd several abusive letters from manufacturers from Boston charging me with being a tool of yours and an enemy of the tariff bill, now for all this I dont care a fig.

It is however far otherwise as it regards the good opinion of Mr Wright and yourself, With Mr Wright my intercourse has been resent but of the most friendly and pleasing nature and for him I have a very high regard, I believed him to possess talents of the highest order, added to which a frank and generous disposition, and he is withal an honest man. With such views was it possible that I would have said any thing that would have been intended to impugn his motives, yet Mr Marcy shew me a letter from him intimating that I had done so, and this charge is made it seems on the authority of a letter written from this City, This letter contained a wilful misrepresenttatian of my conduct and sentiments, and I regret to be obliged to suspect it was written by that ungrateful fellow who made me contribute for printing a speach of yours about two years since when he supposed you was down and could not rise again; but now when your prospects are more flattering, gratuitously lauds every expression uttered by you.

Now for the object I have in writing ^you^ this letter. Which is to make an apology for using the agent that bore the communication concerning the tariff, He is a conceited prejudiced important feeling fellow who I am informed while in Washington made remarks prejudicial to you, which I hope you will not for a moment entertain an idea were countenanced by or met my approbation, The circumstances that led to his being the bearer of the ^circular^ were these, When I started for New York I knew that he was going to Philadelphia and had some intention of visiting Washington before he returned; I requested Marcy to send the papers by him to you with a letter of introduction. I could not have imagined, let his opinion of you have been what it might, that he would on such an occation, being the bearer of a confidential communication from me to you with a letter of introduction, and owing to me what standing he has obtained in society and knowing that you was both my pollitical and personal friend, and had been so uninterruptedly for more than twenty years past, and for whom he knew there was no man in this world for whom I had a greater regard, I say that I could not have imagined that he would on such an occation have taken an oportunity of traducing you, yet so it is, there is no calculating or accounting for the acts of a fool, yet I must confess that on my return from New York I had some misgivings, when my wife called my attention to the circumstance. She said that Woods had strong prejudices towards you and she was affraid that he might say something concerning you while at Washington that might ^prejudice^ you with me as he went with letters from Marcy at my request and she had heard him make silly observations concerning you, and if he should you might suppose under the circumstances they were my sentiments I told her that was not possible. Thus you see in this case as in most others women have more foresight then men, I have suspected for some time past that you and others of my friends at Washington had misapprehensions in relation to myself but I have said nothing on the subject for I knew the time would come when you would get right.

I know that nothing has been done or said by me that should interrupt the long and on my part must cherished friendship between us and I hope it will continue to be as it has been sincere and warm. Make my respects to Wright and believe me your friend. 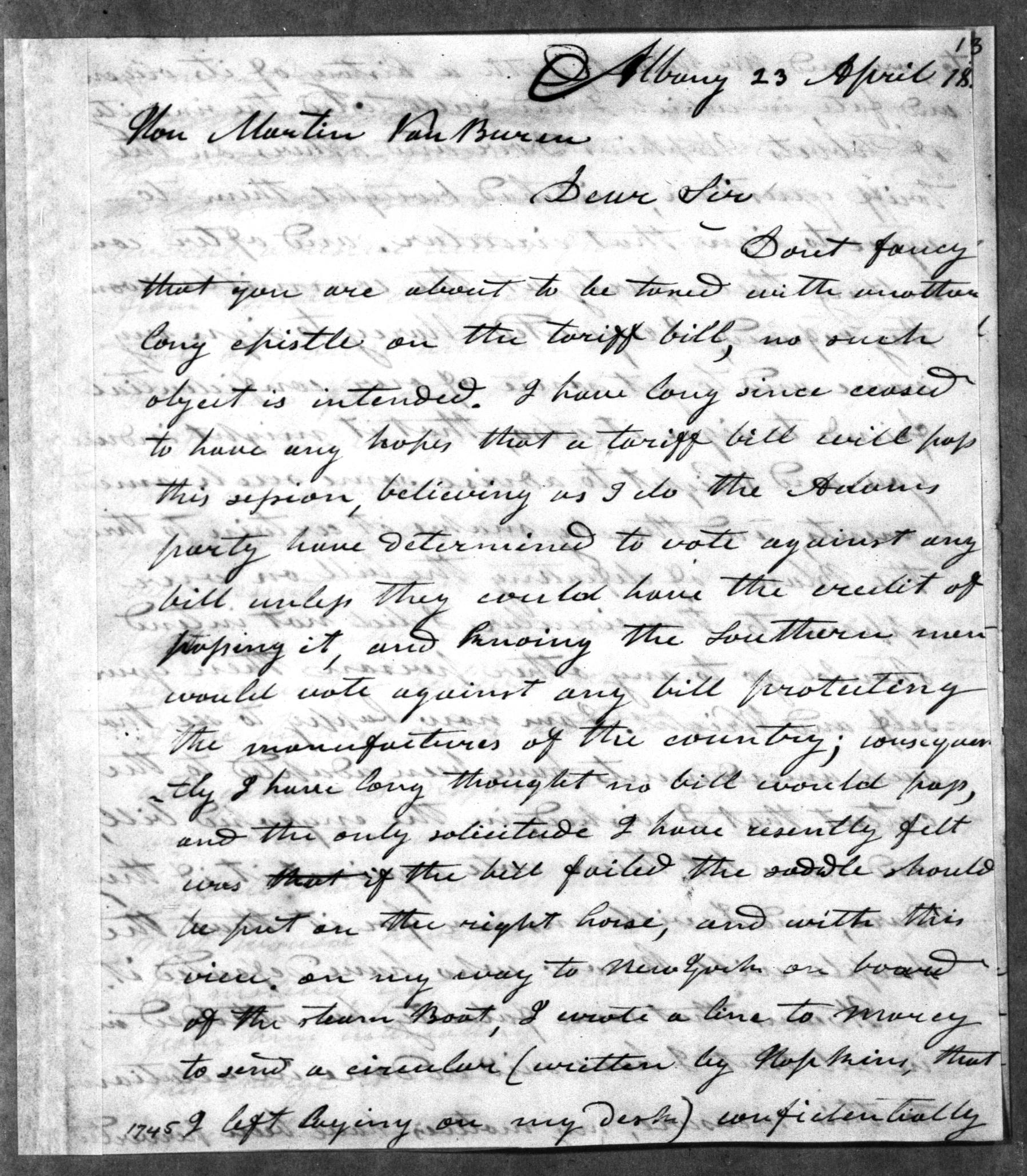 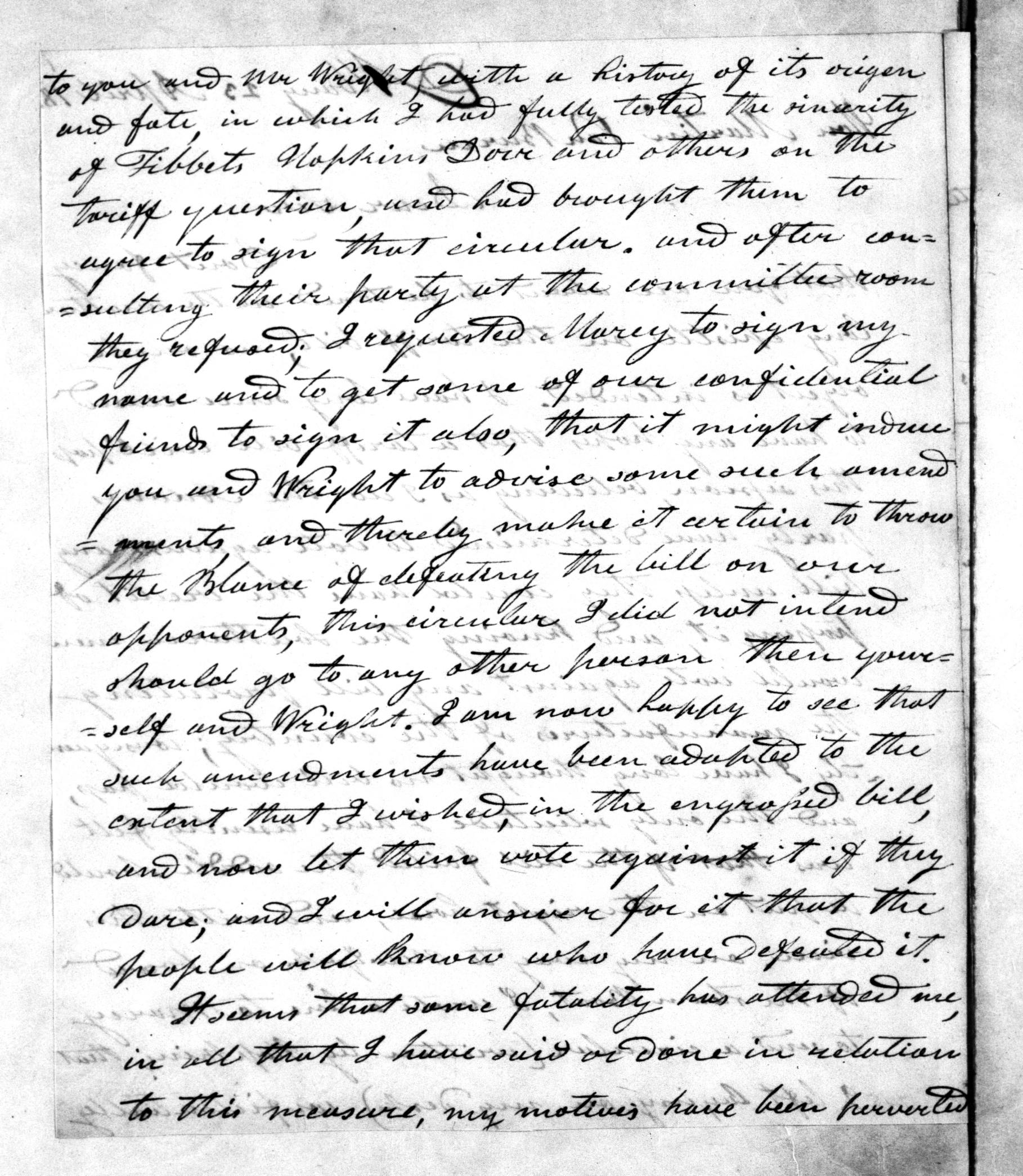 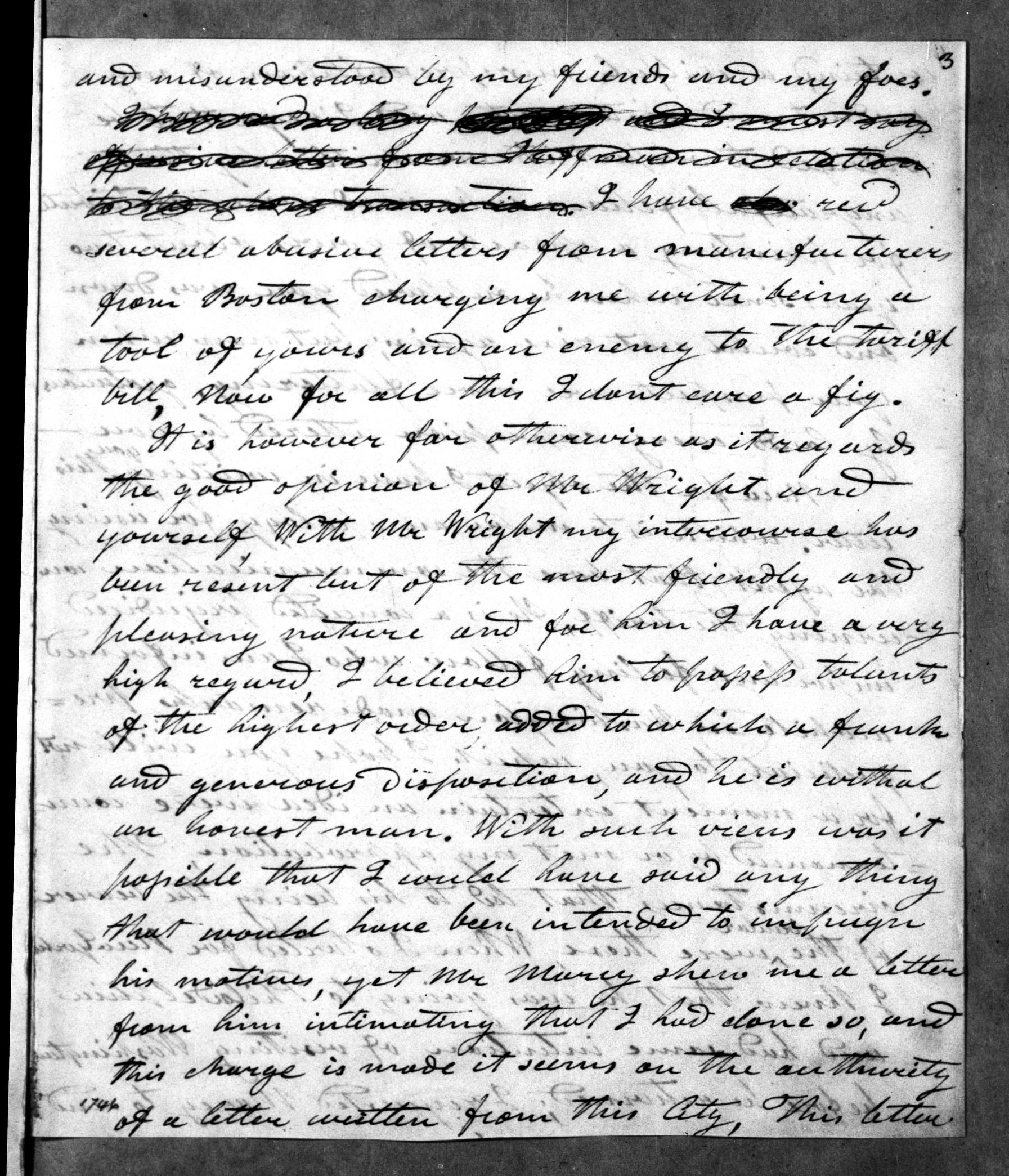 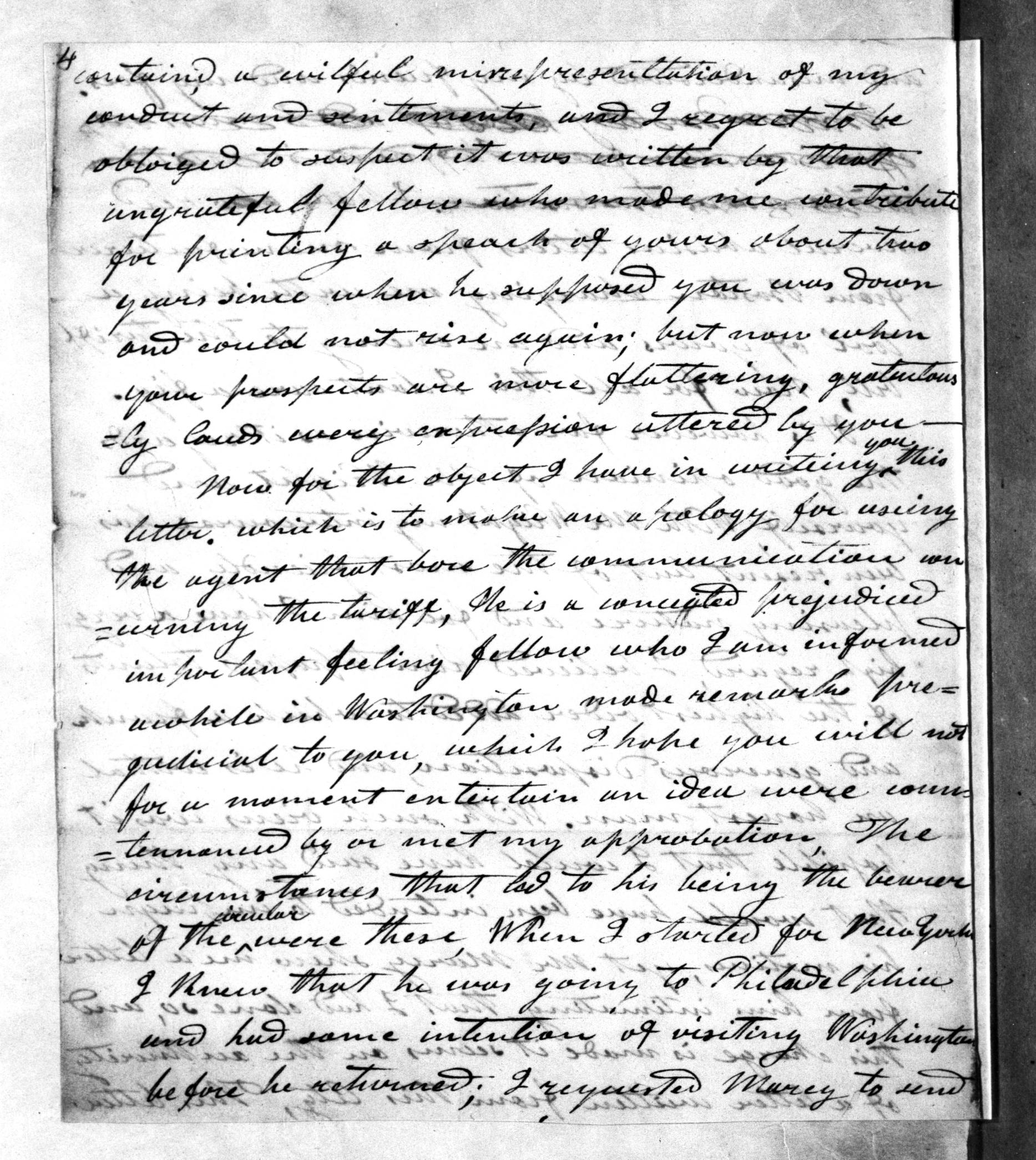 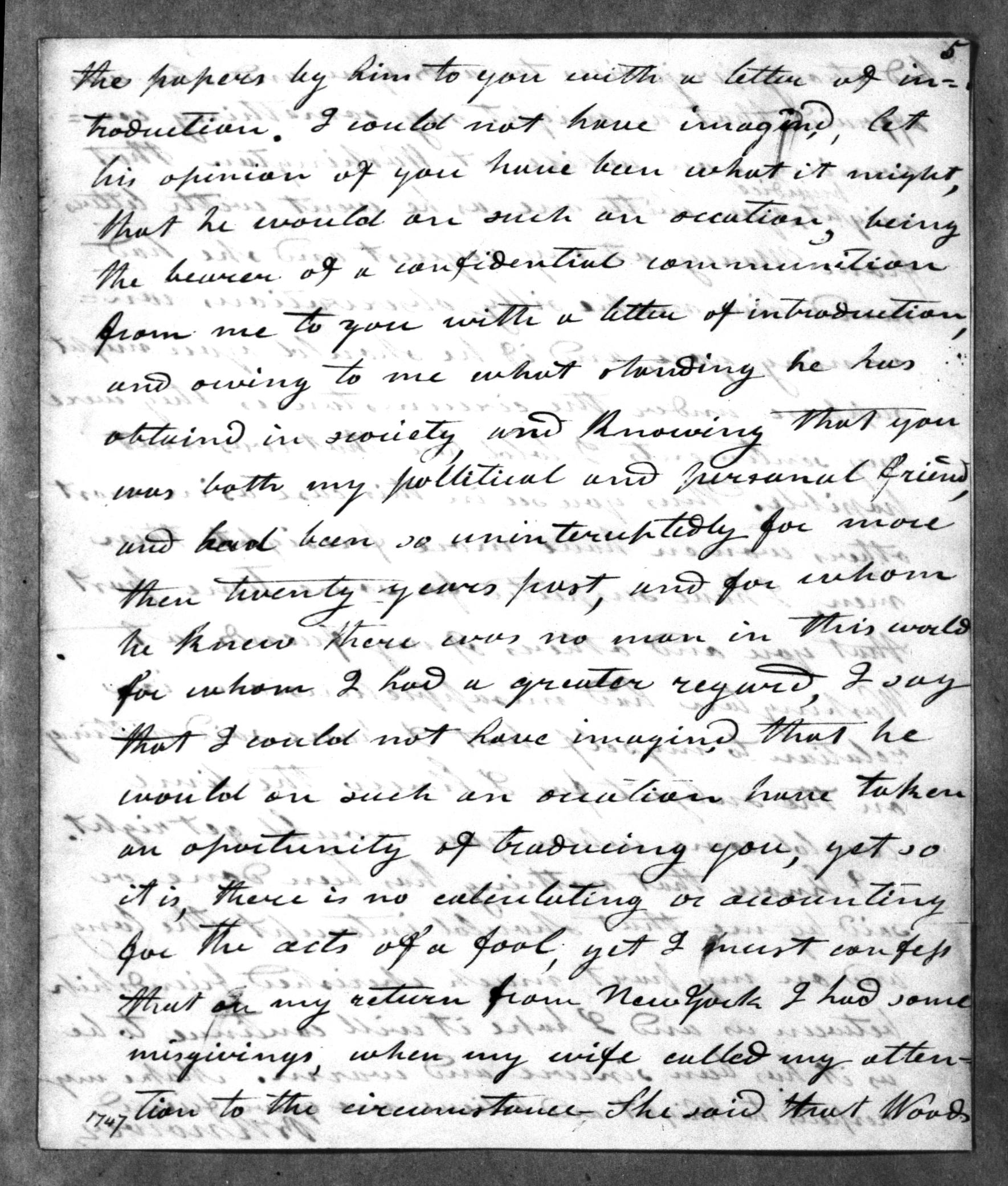 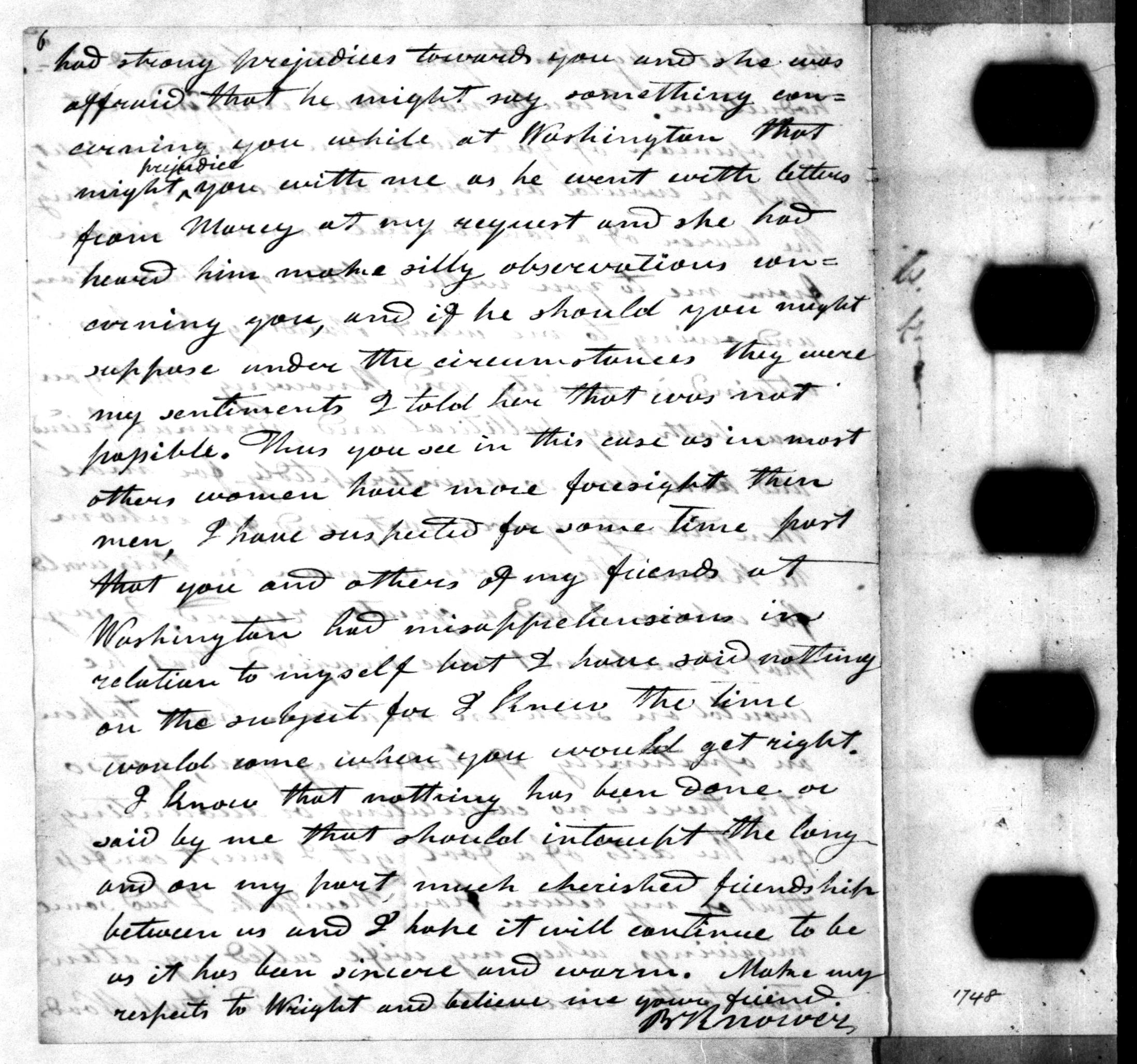 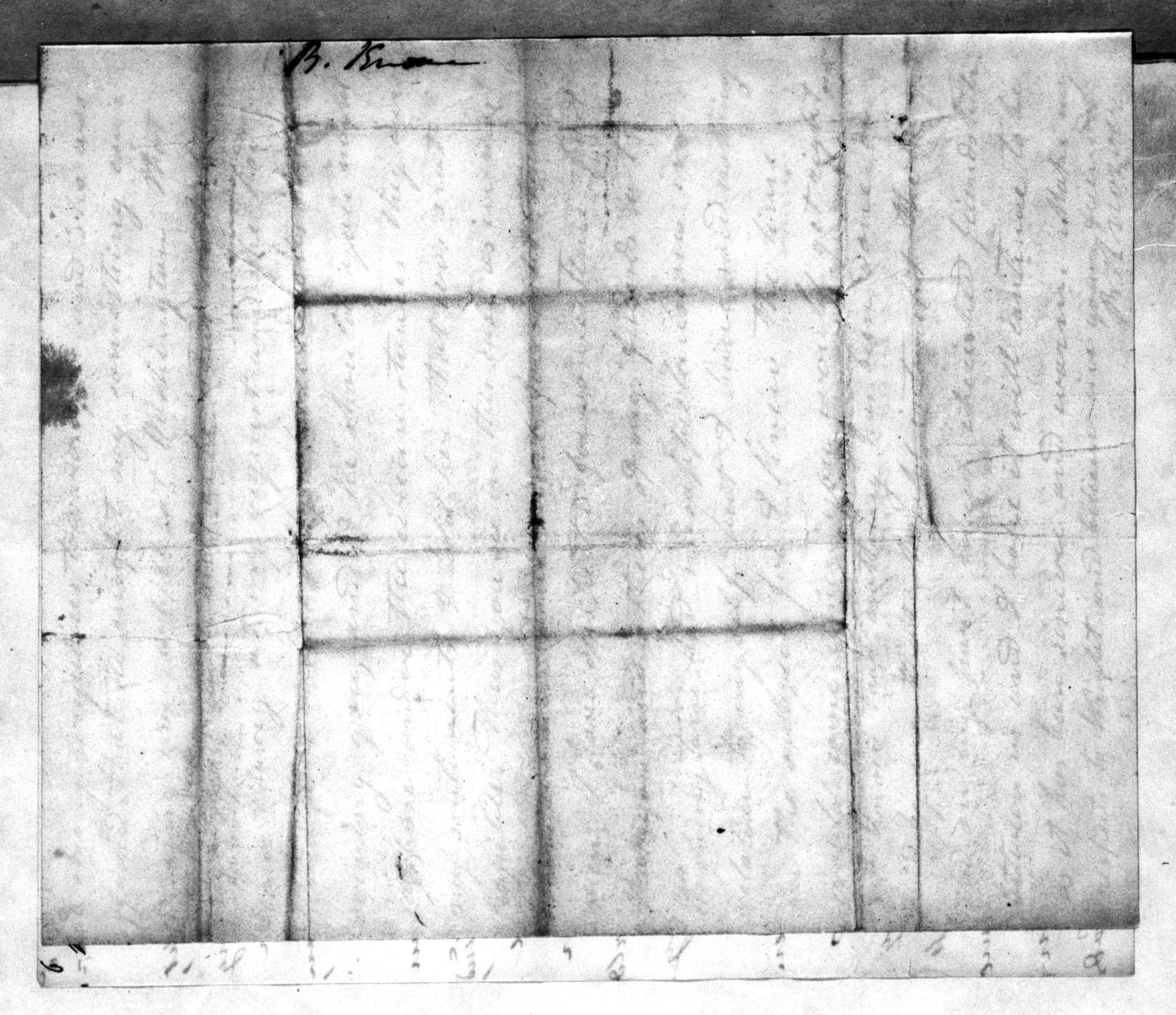