I came to this place to attend Feby. Term, but with a view of returning as soon as my business at Term was over. Circumstances however have induced me to stay until the present moment; and I may tarry 8 or 10 days longer, for the purpose of seeing the termination of the Chenango ^canal bill^ a measure in which I feel a deep interest personally & politically.

Since I have been here, I have seen nothing to alarm me for the safety of the Jackson cause, or the Republican party in the state; and whatever may have been rumored abroad. More sound substantial Republicans never met in our Legislature in one year Tho there is none of the first rate talent on our side of the question in either house. There is much of what we generally term mediocrity talent & more than I have ever before met at the capitol Among the Jackson Bucktails in the senate there is not one crooked man & I do not know of five in the other house It is true different individuals entertain different views on minor points, but even in these differences there is to be seen much courtesy & good feeling towards each other.

Men of circumscribed & narrow, but honest views who are better fitted to legislate for "ages by gone" than the present generation should be expected, & will be found in every legislature; & I never feel disposed to waste my strength, or spend my force quarrelling with their errors, or in an unavailing conflict to overcome their obstinacy I cannot feel it in my heart to be even angry at them, and it is with much satisfaction I can truly say very few such are to be formed in our capitol this winter.

Bucklin so far as I can discover is sound and sufficiently liberal in his views of party policy generally, but it is to be regretted that he does not choose for his associates men in whom any body have confidence, & such are his habits that he is but little in company with those with whom he ought to keep up an interchange of sentiment to render his talents useful to the party Mann in my opinion has been treated with kindness & much fairness by Butler, and should be the last to complain Indeed he alledges nothing specific Indeed Mann possesses a very good heart, warmly devoted to the party provided it can be wielded to advance his & establish his greatness & with special reference to his crude notions which must be recognized as a sine qua non. Our mischievous, but sometimes useful, & often valuable old friend Keys put him on to a wrong track in relation to our canal & the poor fellow has been ever since laboring under a hallucination on this subject. He supposed that all his future fame and glory depended exclusively on his reports being sustained by the house, but he has been by no means formidable, and I have had the good luck to maintain a very good feeling with him We must laugh about the matter he admitting that I have dealt fairly on the subject, & I at the same time admitting that few men could raise such a formidable army as he has raised, & so the matter goes off very well, but his opposition to Banks canals, the Clinton bill & nearly every thing else have made him something of a butt and it has become fashionable to laugh at every thing he says & does At the end of another his legislative year it will probably be said "There is another star gone out"

But my dear sir I had almost forgotten the object of this letter; which was to say a word on the subject of Gov. I have but a very limited knowledge of your views of matters & things generally at this time and therefore may differ widely from yours. But I am viewing this subject as if I were assured that we could elect you by a large majority, & should hassard nothing in this attempt, a fact of which I am tolerably well convinced tho not entirely certain But suppose all this beyond a question. Then could any thing be more advantageous ^conducive^ to your popularity & the consequent interest of the party than to go before the people as a candidate & be identified with the Old favorite hero.

You have many strong, warm and constant friends in this state, but yet have never been before the people The great body of them have heard but little of you, except through the medium of the papers, where there have been ten attacks to one favorable article. Being a candidate at this time would make justices, constables & all the minor active men in the towns familliar with your name, & from there it would be scattered throughout In fighting the battles of a man at Election in a warm contest, we become insensibly attached to him, & when you decend to the very lower ranks this attachment becomes enthousiasm  What but the many battles fought over the head of Daniel D. ever created such an attachment to him among the lower class? Indeed Sir I lay it down as a truism ^certain^ that unless a man has performed Military services or been before the people in such a way as to make them familliar with his name, he can never have a well founded popularity

Clintons death causes the breaking up of a powerful party in the state. They will locate some where They have been accustomed to man-worshipping & will not locate themselves with any party unless some distinguished individual is at the head Who would be more likely to obtain more the republican part of their support than you would  May not the time come when we shall be pleased to show to the U.S. that you have a well settled & stable popularity here? Can we do this without pointing to an election When we point <them> to preferment by the legislature will they not answer this is owing to party machinery & caucus management & that the people would have decided differently? These things are worthy of consideration

Again what are the ends to be answered by staying at W. You cannot improve your popularity before the nation. If you stay in the Senate you will be a target for a powerful opposition to fire at

Things may be thrown in your way where you Must so act as to dissatisfy either North or South & possibly both. Should you go into the Cabinet, all the opposition to Jackson would make this <charge> direct upon you, as it would not be expected that he would again be in their way  It is true you would have some patronage to protect you, but it is very uncertain how much and I do not believe much of it would be placed at your disposal About all this however you are much better informed my dear sir than I can possibly be  But even after <our> Election should you wish to go into the cabinet you could go as well from the Governors Chair as from the Senate & I think with much more propriety  But I have written enough for one letter 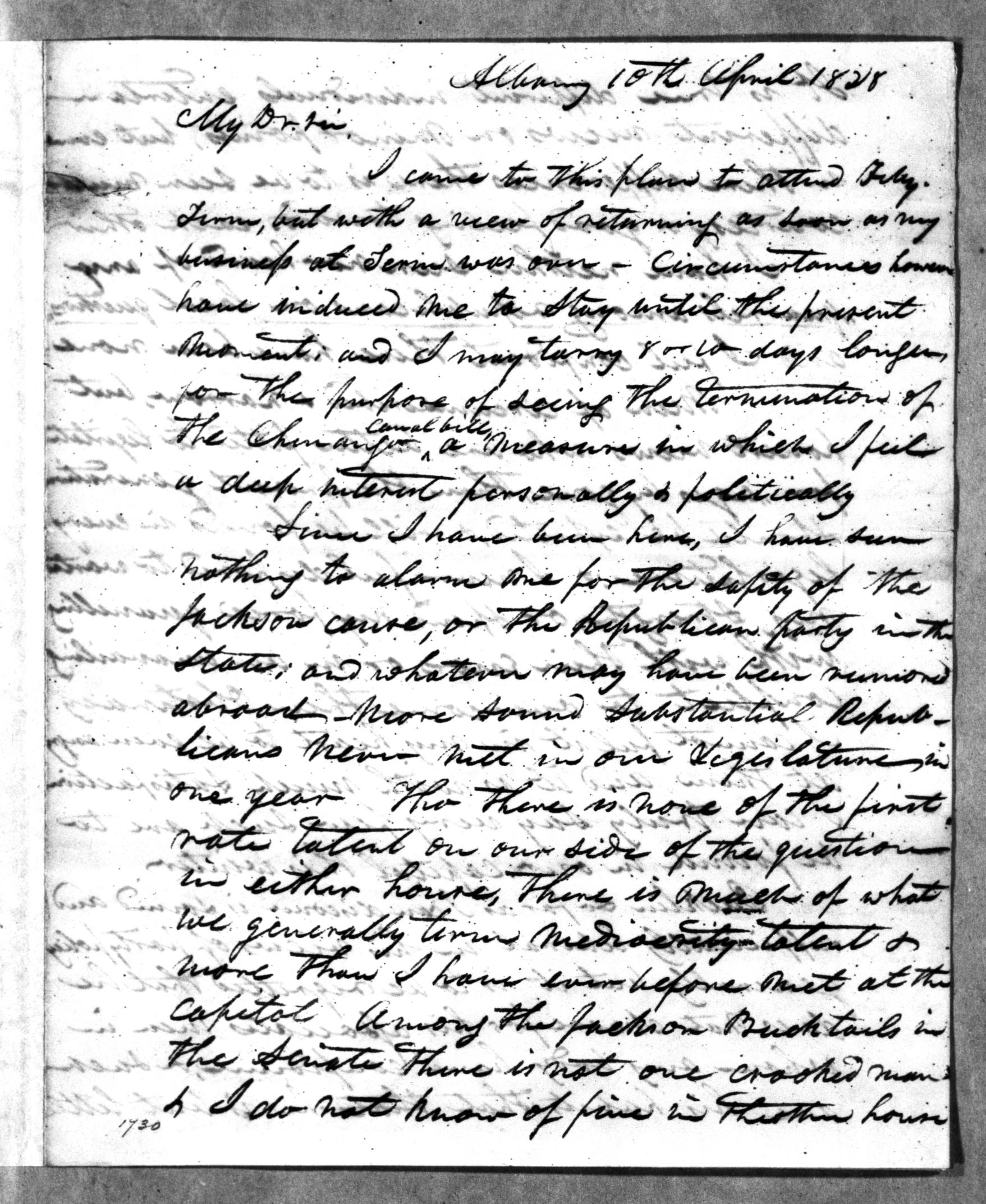 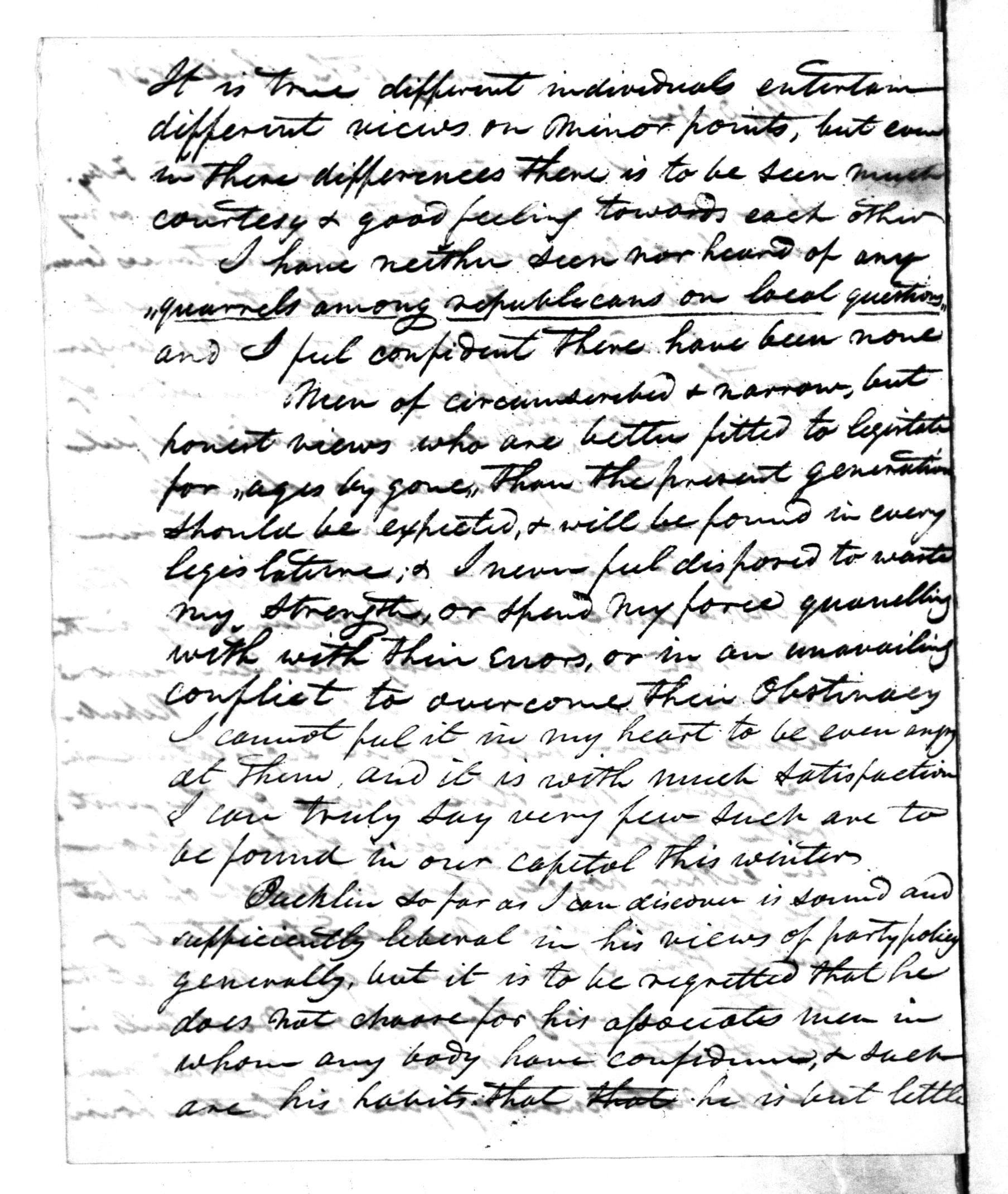 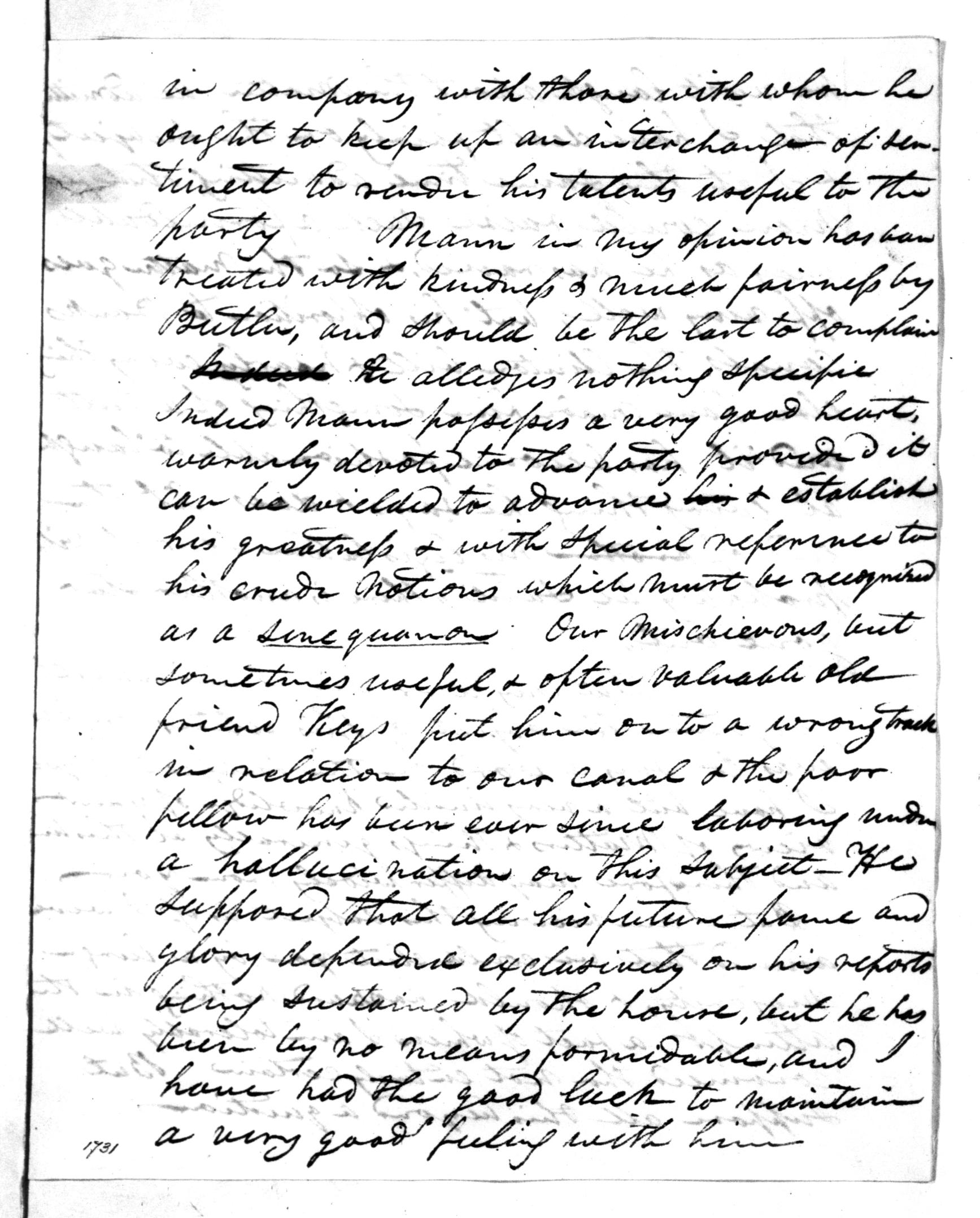 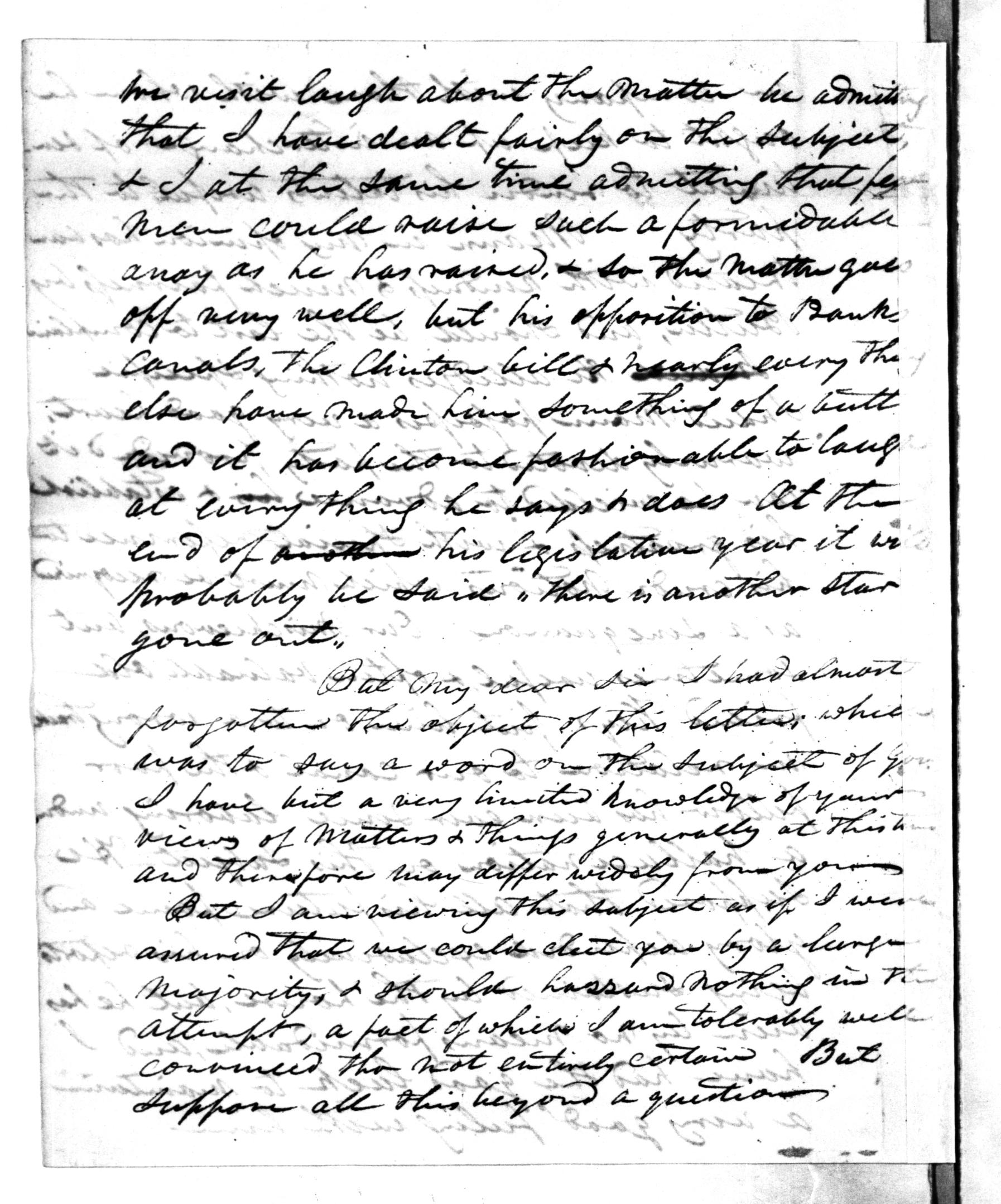 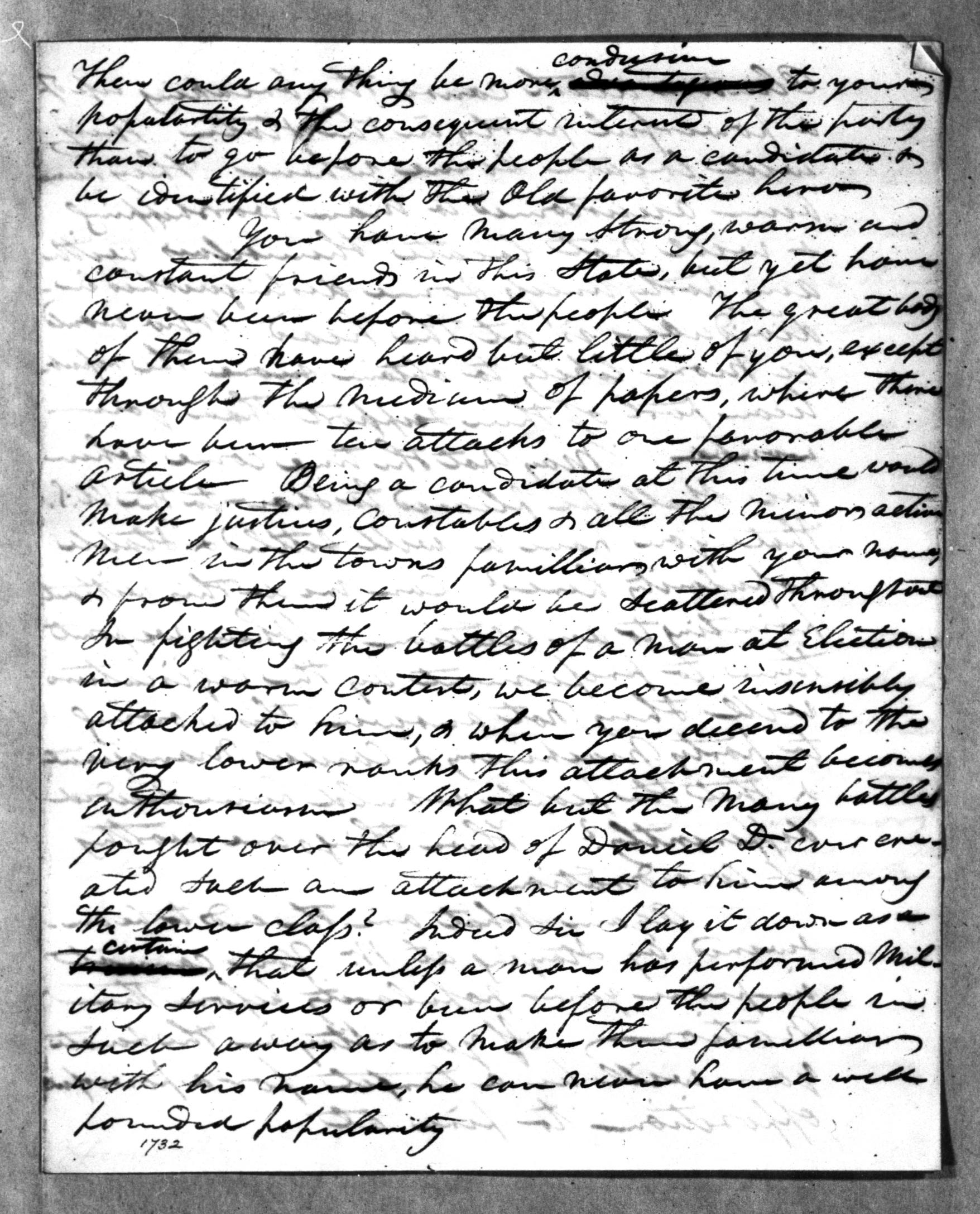 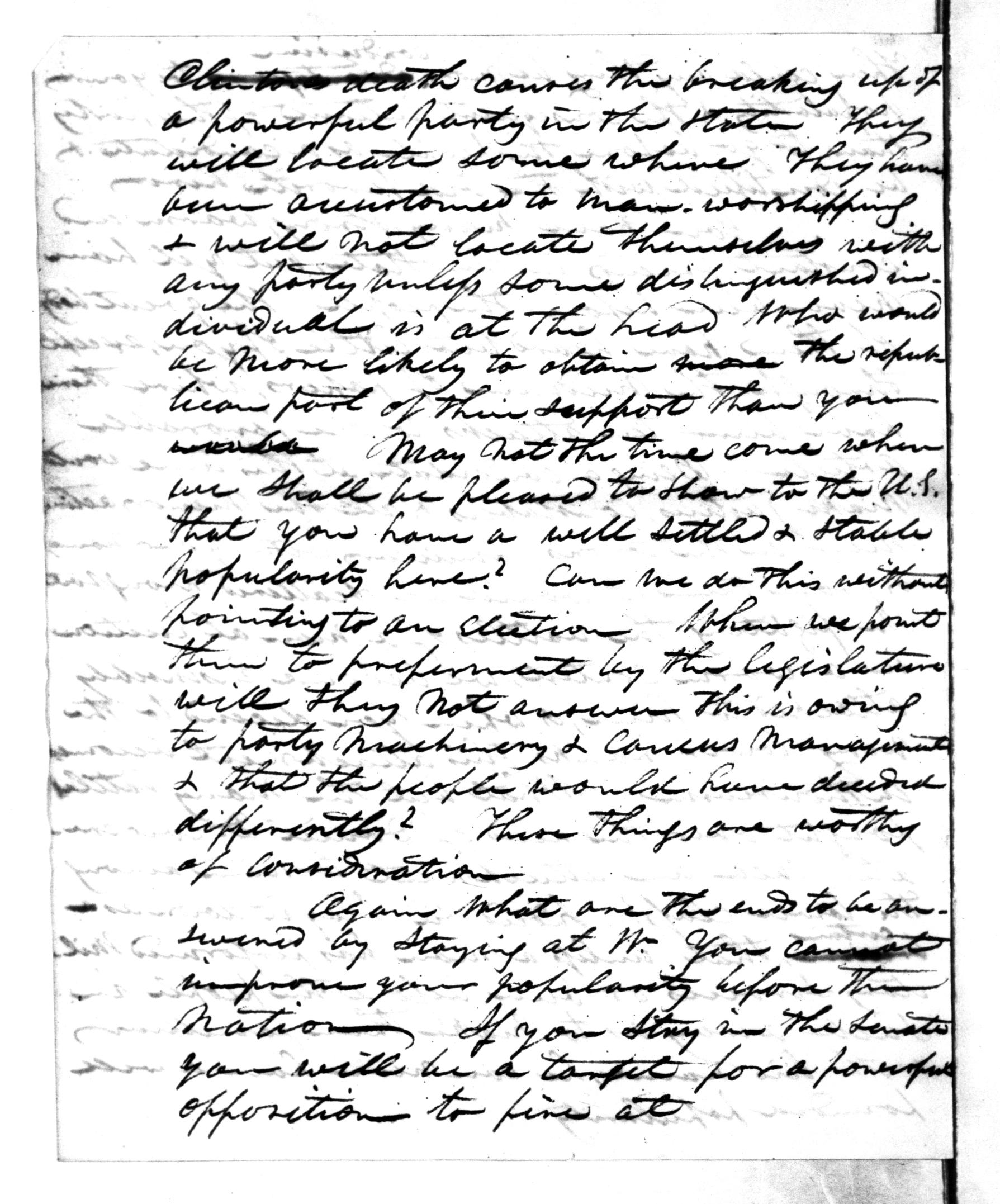 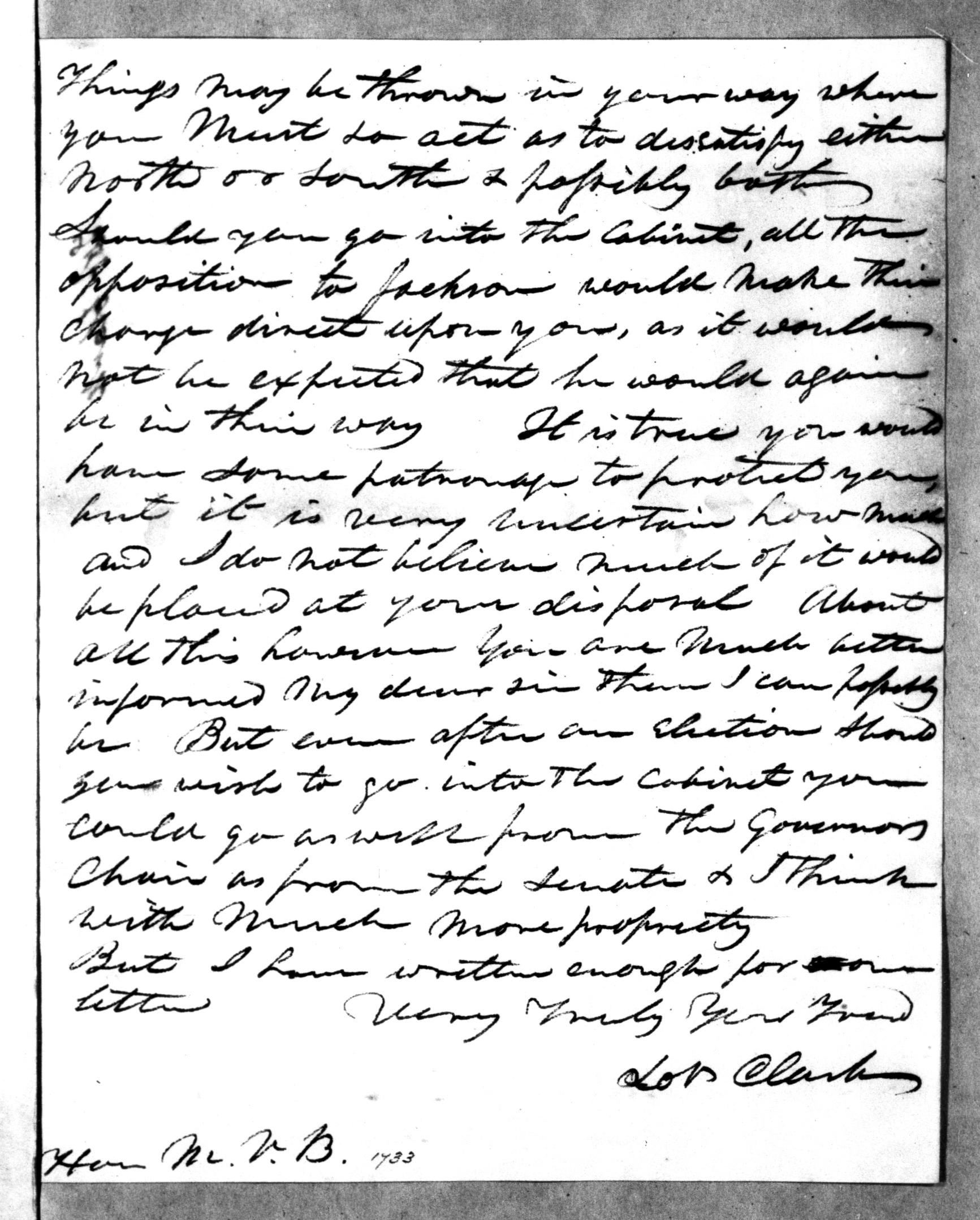 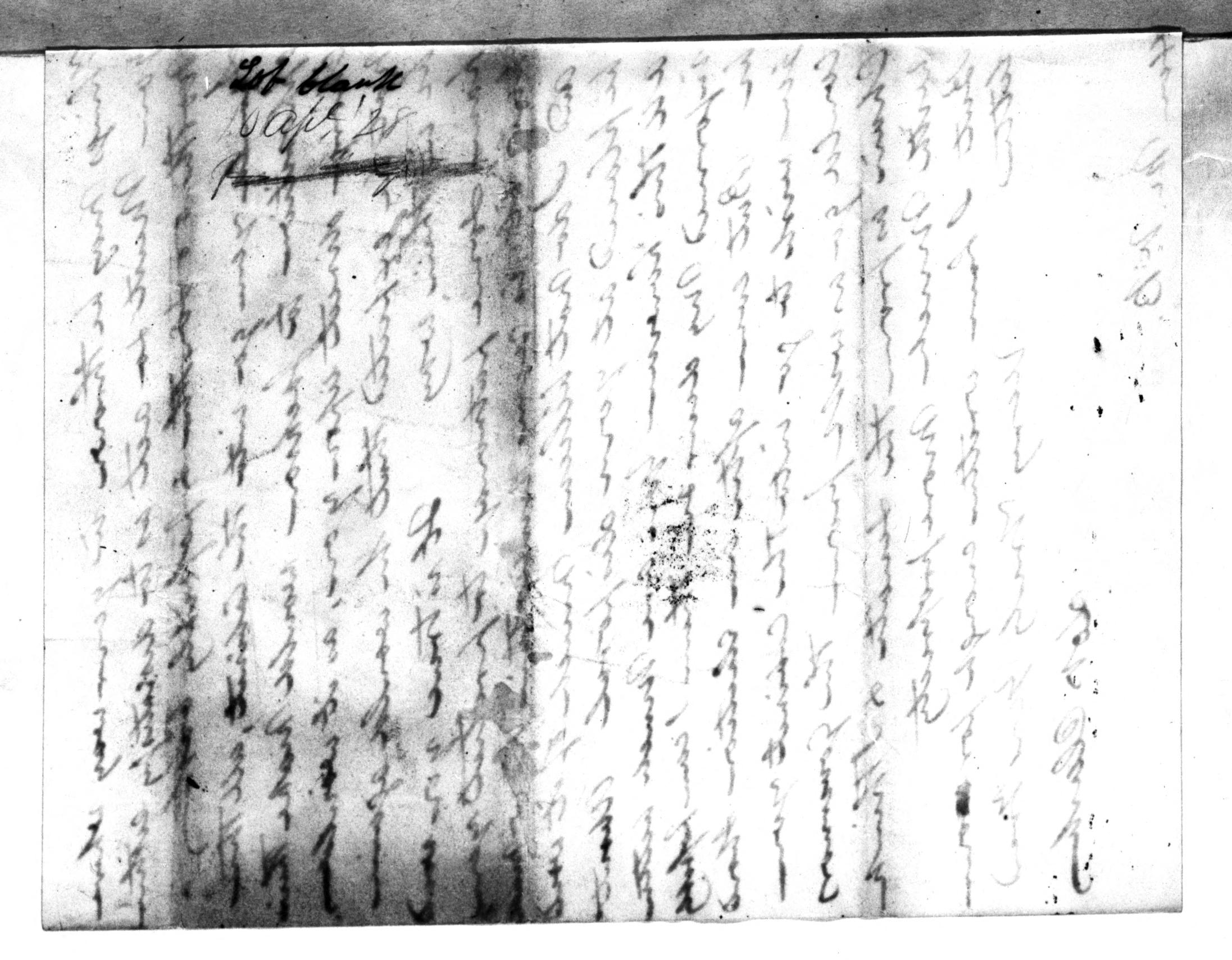