The pending question of the Tariff, as regards its effects upon coarse wools and woolen fabricks, has been a subject of very anxious, but of perfectly friendly discussion among several citizens of this place and others casually present, and who, disclaiming every political & other foreign motive, and looking only to what we conceived to be the common good, beg leave to lay before you certain results of facts & calculations in which we all unite, and on which we believe a safe reliance may be placed.

We hope the offer of submitting these views to you will not seem obtrusive or in any wise improper; for it is not so intended. But having witnessed with great anxiety the difference of opinion among the advocates in Congress, for the protection of domestic industry, as indicated by the bill & amendments, it is hoped that any suggestions calculated to reconcile that difference will not be wholly unacceptable. And though we write a joint and circular letter we claim for it no other consideration than the facts and conclusions may in your judgment merit.

We observe, in the first place, that the kind of wool in which the great body of our farmers are interested is that of the common sheep of the country. For many reasons we think they will long continued ^to be^ the case. These sheep increase more rapidly than the fine woolled: they are more hardy at least untill fully grown; the carcase is more Valuable and constitutes a principal dependance of the farmers for fresh meat in <illegible> in summer. Their families are habituated to the use & manufacture of the wool and will not readily exchange it for another kind & they bring the surplus to market. All accidental crops from another common flock does not destroy the hopes of the owner as in the case of fine sheep: all these circumstances make them better adapted to ordinary farming.

Of the common wool it is not unreasonable to estimate that the state of New York produces Eight millions of pounds annually and of that amount about one tenth part ^15 per cent^ or 1:200,000 ___ pounds is of so coarse a quality, when assorted as to be proper for the coarsest fabricks, upon enquiry of dealers <refined> that this kind of wool when washed and pulled by the skinners sells at about 15 or 16 cents for the coarse and 28 cents for the residue of the fleece the average being about 26 cents. The average of shorn wool is about 20 cents, not being usually so well washed.

The wools of the Levant are quoted in the last sales from   , to 12 or 13 cents which agrees with the evidence before the committee. We find from the best information and are convinced by a personal examination which some of us have made that these woools will lose full one half of their weight in cleansing. It follows that the above prices should be doubled for clean wool that is they should be stated at     24 & 26 cents and we find accordingly that Smyrna wool washed according to the custom of that country is quoted at about 19 cents. After making full allowance for the fact that our common wool as above quoted is not fully cleansed, it is plain by the above prices that the imported wool just mentioned does interfere with the lower grades of the home product. We mention these facts regarding the wools of Smyrna &c without meaning the slightest imputation upon the respectable witnesses examined before the committee. The importation and use of these wools is in but few hands and the facts regarding them might well be unknown to them for they are new to most of us.

From Buenos Ayres we do import wool of so inferior a quality that it brings less than 8 cents a pound when in a state of tolerable purity. Wool of this quality does not interfere with any our own product but the fact and the amount of the importation proves that considerable manufactures depend upon it. While therefore we candidly assent to the duty on all other wools reported by the committee we would respectfully submit that wool of this latter quality might be admitted with a moderate increase of the present duties a measure which would prevent the destruction of the manufacturies of the coarse fabricks without at all affecting the farmers. And it seems worthy of remark that the South American market which furnishes this wool is much more important to our trade than the ports of the Levant.

The main purpose of this letter therefore is to present these facts in some ^sort^ newly discovered that the coarse Levantine wools may interfere with our own if all under 8 cents are admitted without further regulation. We do not suppose that the growing of such wool seperately is even hoped or wished for here but it constitutes in the assessing a certain proportion of all our common wool and in this manner enters into the value of every fleece. Under the ruinous depression of the article even the protection of this coarse kind may be some encouragement to bring it to market. But when it comes to market the only purchasers are the manufactures. It is therefore of the utmost importance to the farmer that those manufacturers be sustained by an encouragement for their fabricks corresponding with the rise of wool consequent upon the duty. What that rise may be will appear from the following calculations

1st At the present duty

2d The same according to proposed Bill

which upon $0.92 constitutes an advance of more than 90 per cent

To all these duties we cordially assent it accompanied by a corresponding duty on woolen goods. But the protection of the farmer is a market and the market for wool is the manufactory. We need not occupy your time to prove that an advance of 60 or even 30 per cent upon the stock of any branch of business must wholly derange its system and that in all ordinary cases the manufacturer must either obtain a market at prices corresponding with the enhanced price of his stock or suspend his business. To us it is useless to prevent the importation of foreign wool unless by that means we can sell our own and to grant us what is called encouragement at the expense of the manufacturer would be the utter ruin of our only market.

We would by no means be understood to say or believe that the price of wool will actually rise to the extent of the increase of the duties. On the contrary we have no doubt that the large stocks on hand will keep the prices moderate But the same remarks and reasons apply to cloths with the addition that the business of manufacturing implies an investment of Capital which the owner will never intentionally invest at a risque. Which therefore he will not invest at all (as is also intimated by some of the witnesses) unless he believes himself protected and that if he makes no investment we have no market for wool.

It is manufactures which the country wants more than anything else. And it is not to be expected that additional adventurers will be found unless substantial protection shall be extended to them by government.

The revolution now in progress of changing the wool growing business from foreign countries to this and the cloth market from England to this country to the extent of our wants has brought upon the wool growing and cloth making business as well in England as this country extreme depression. Between the two countries the number of sheep & clothmakers is too large. One or the other must lessen the number of cloth makers & sheep. Shall the diminution be in this country or in England who has driven us to these pursuits by refusing to take our bread stuffs lumber &c in exchange for her cloths. The best policy and best interest of the country in our opinion requires that we should sustain our wool growers and cloth makers in the competition and depression which is attributed more than to any other cause to the late increased number of sheep & cloth making in this country.

We submit to you whether as a general rule all duties should not so far as the nature of the case will admit be made specific as being infinitely less liable to evasion than ad valorem duties. 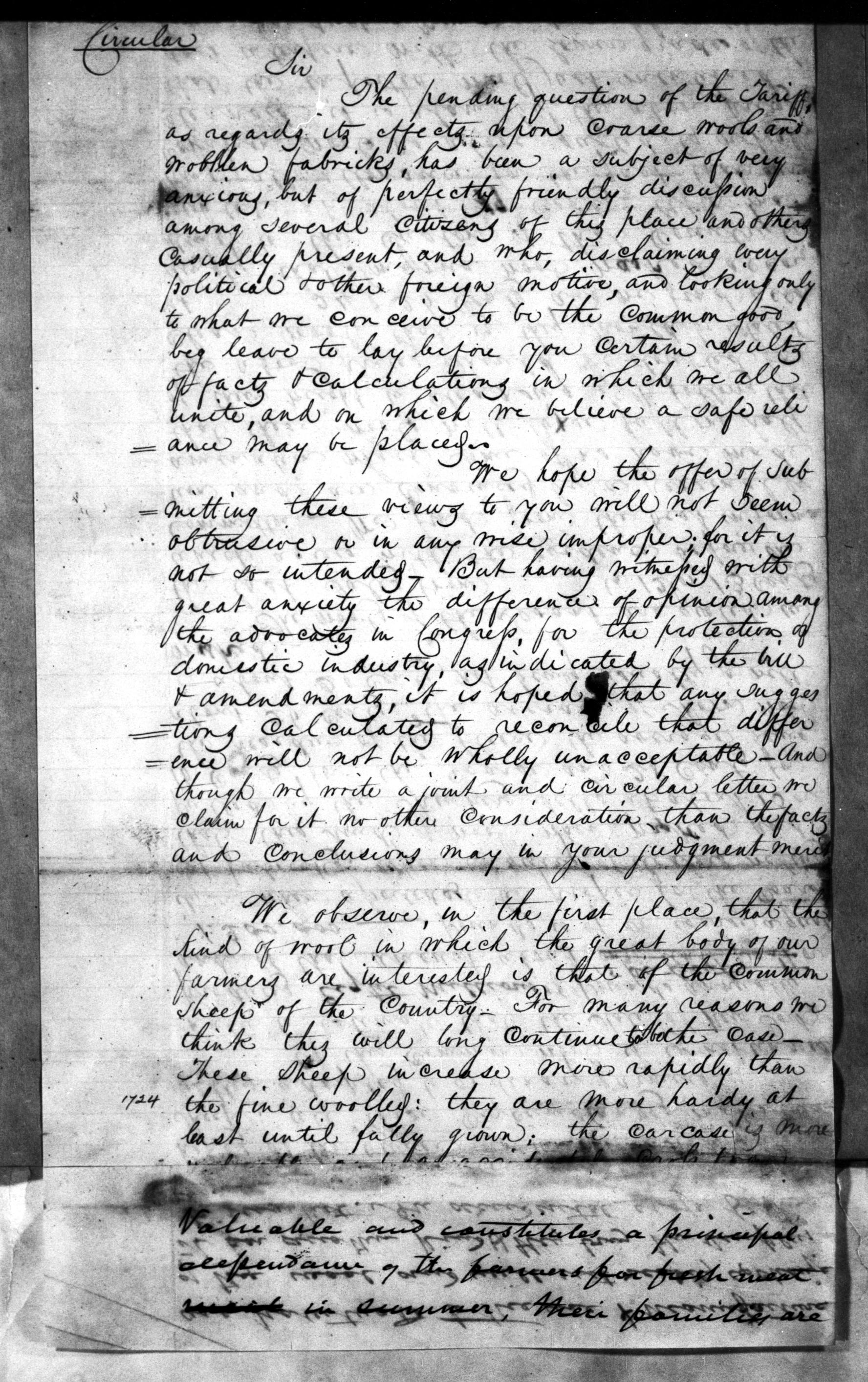 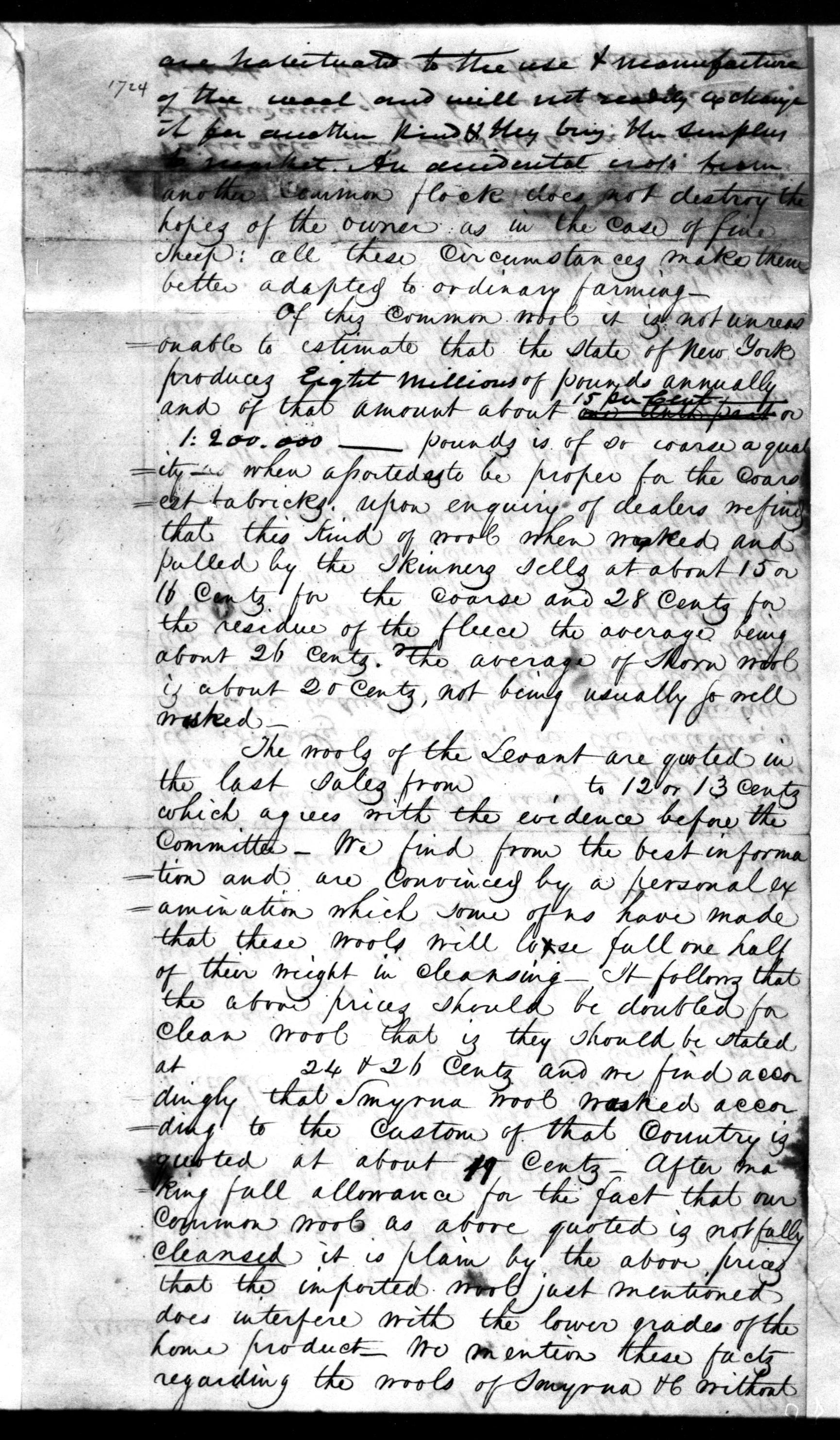 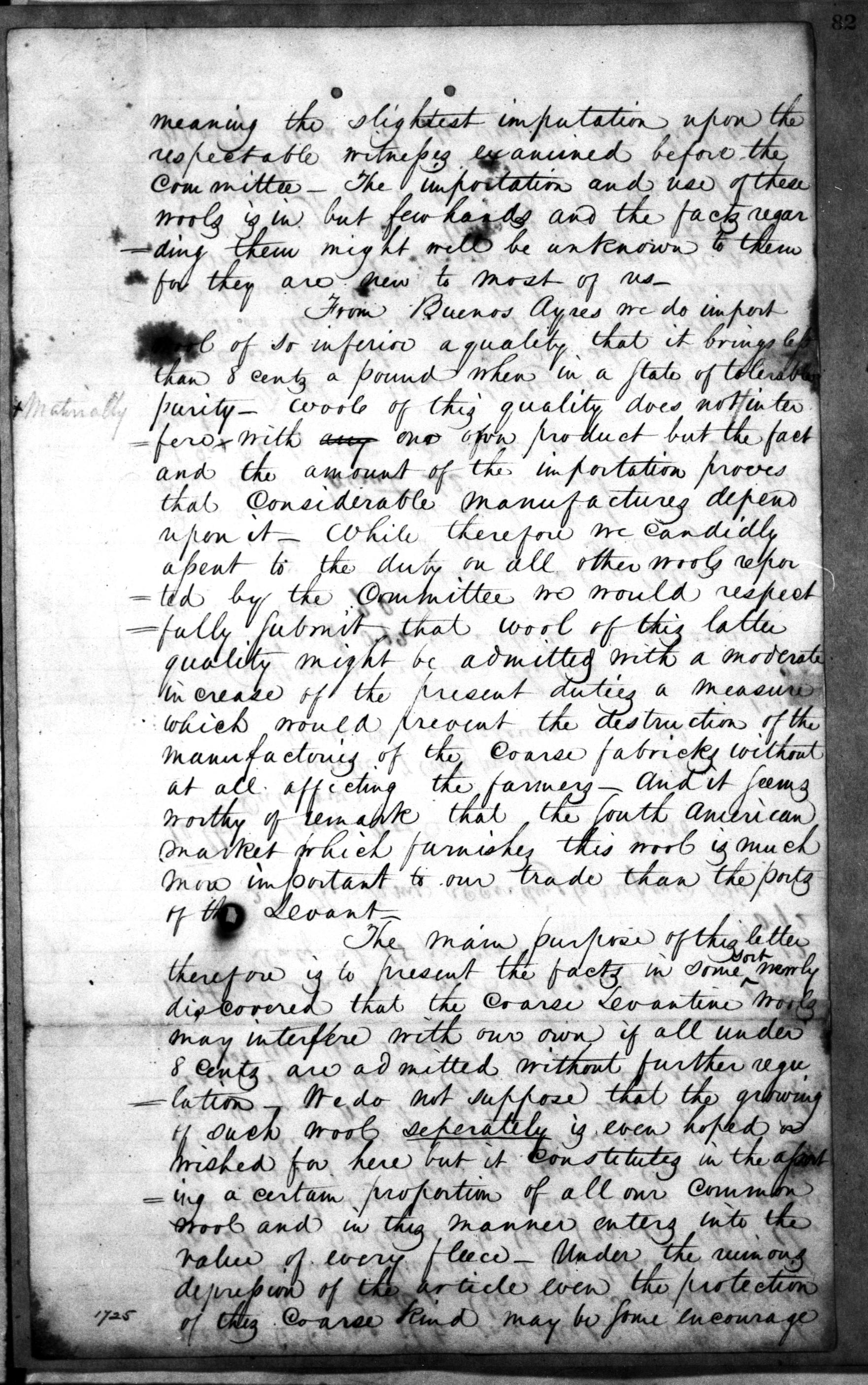 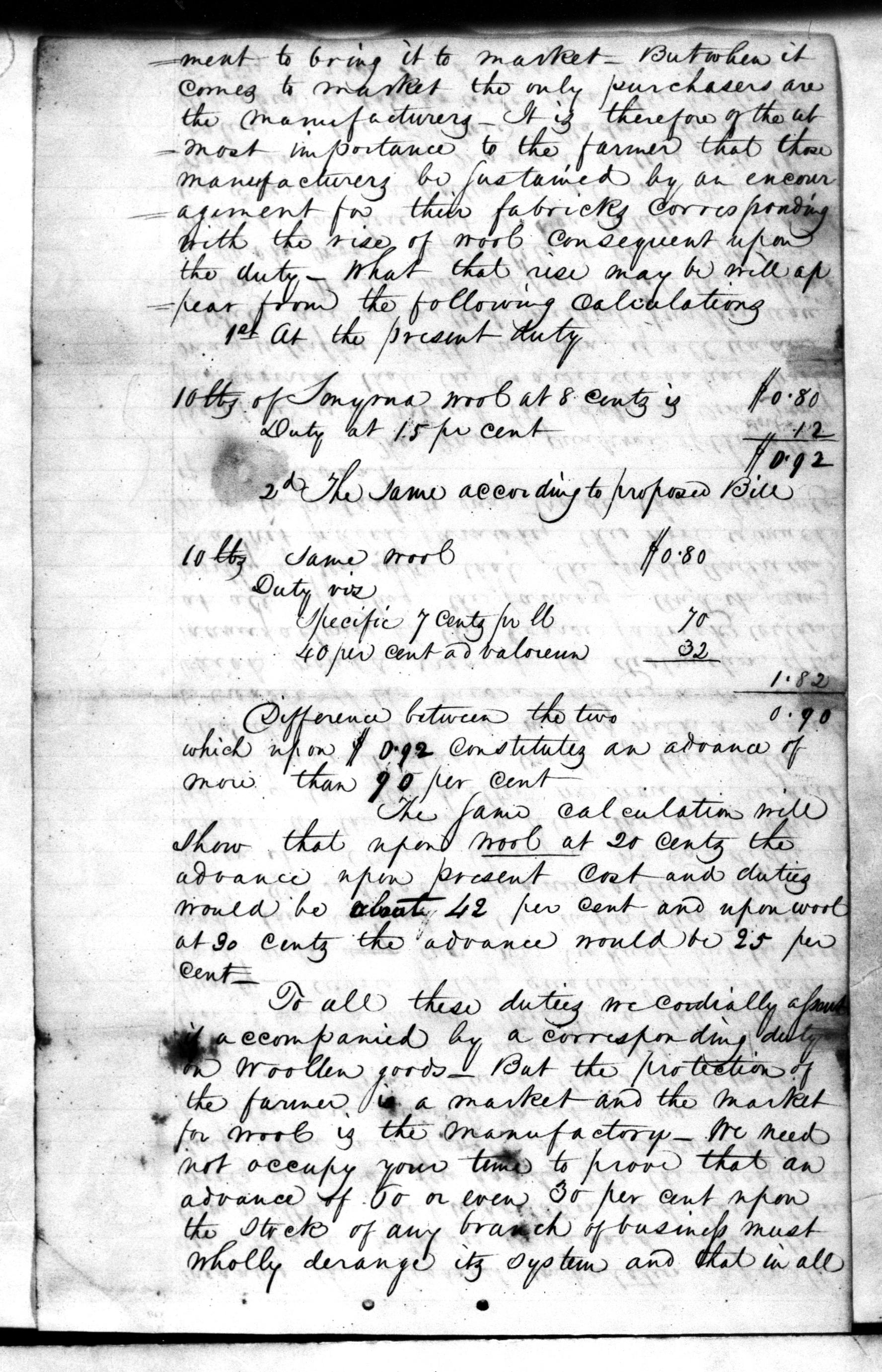 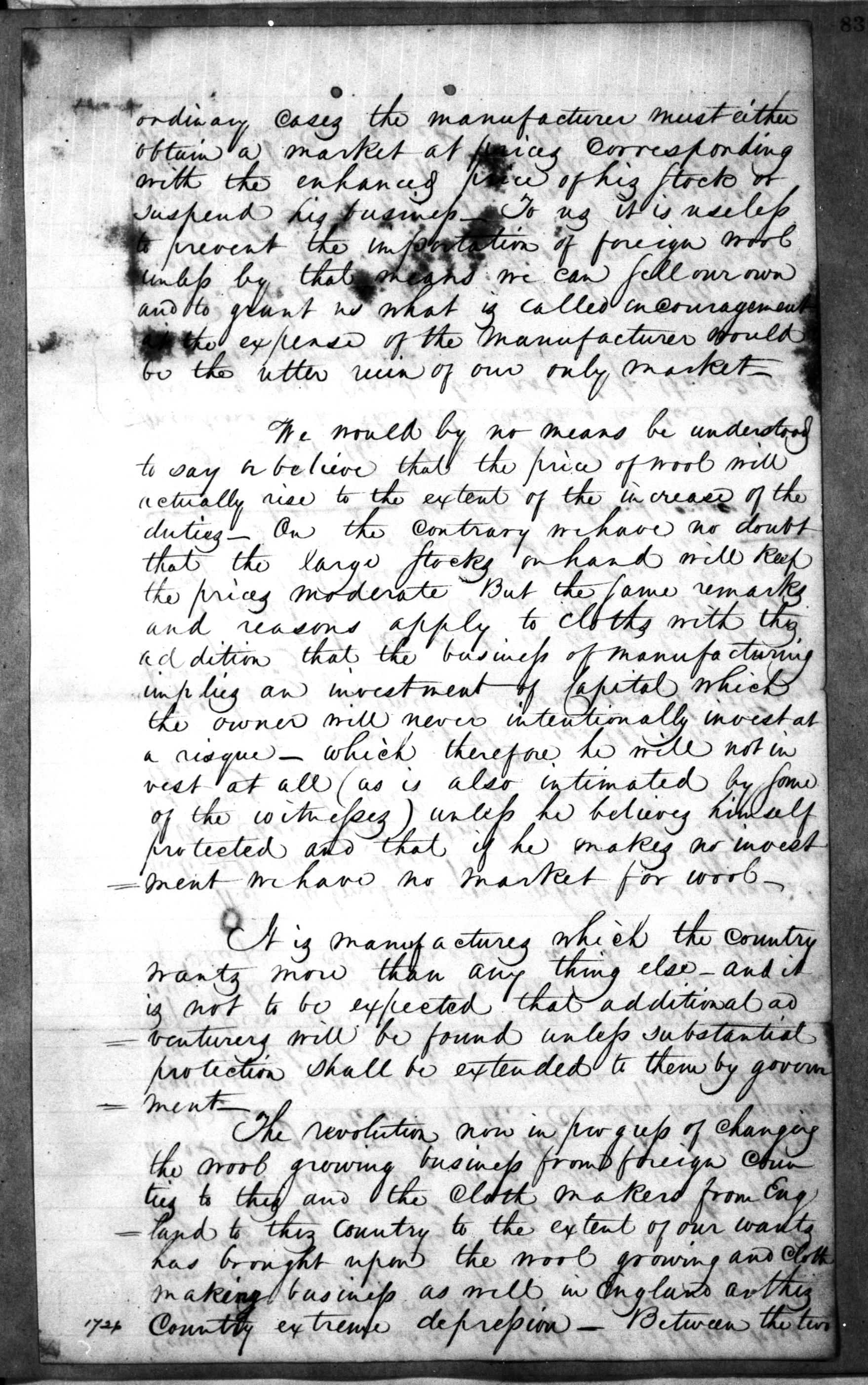 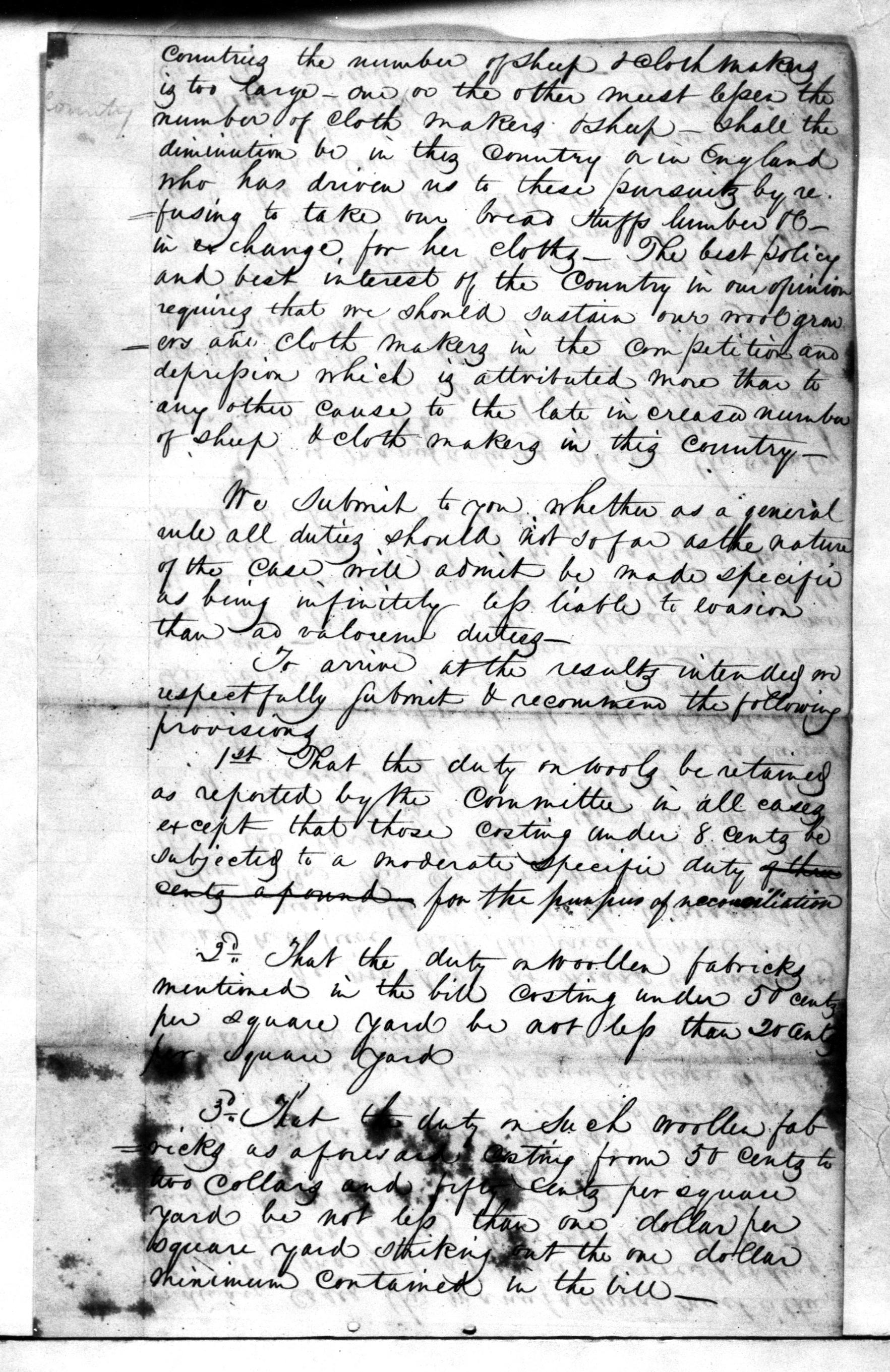 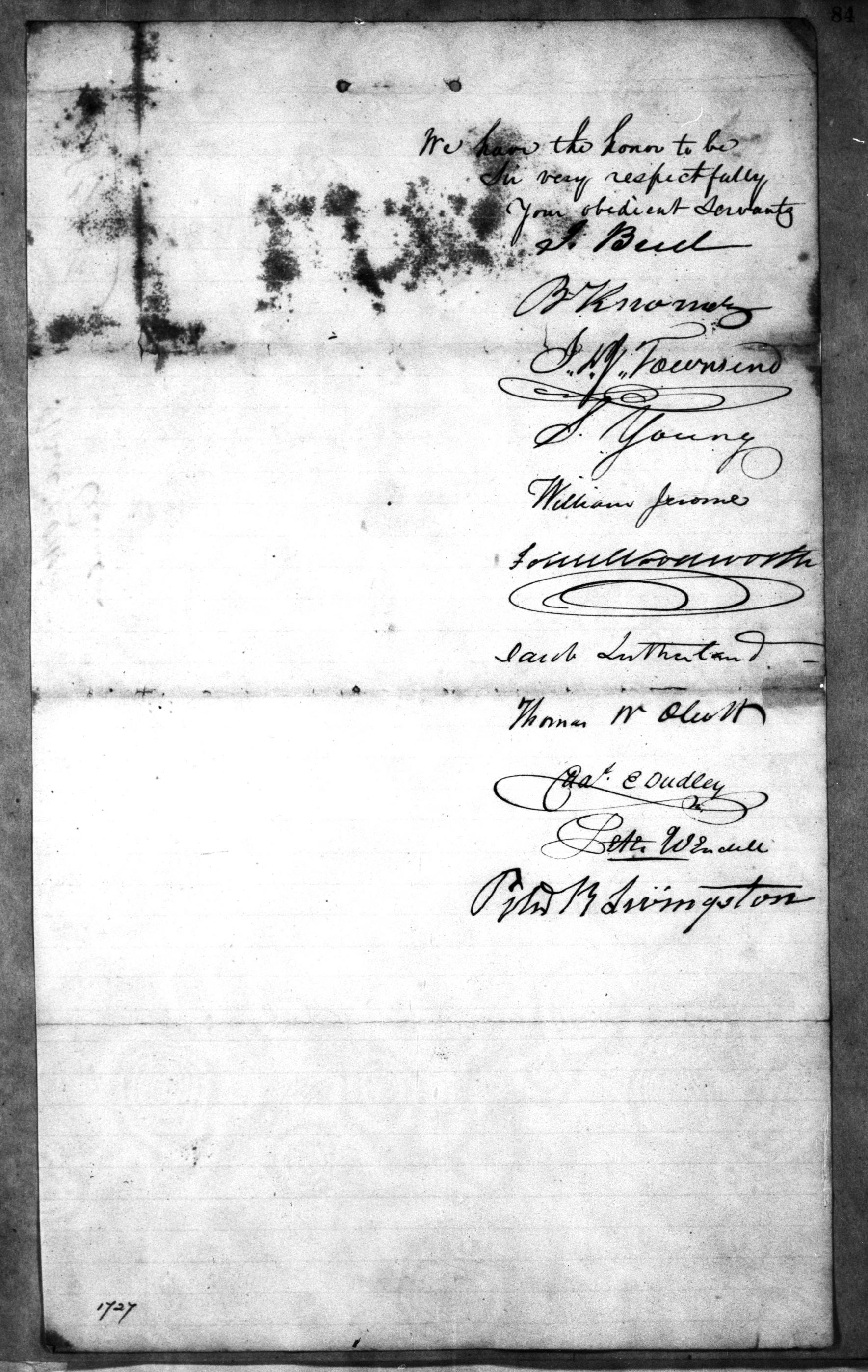 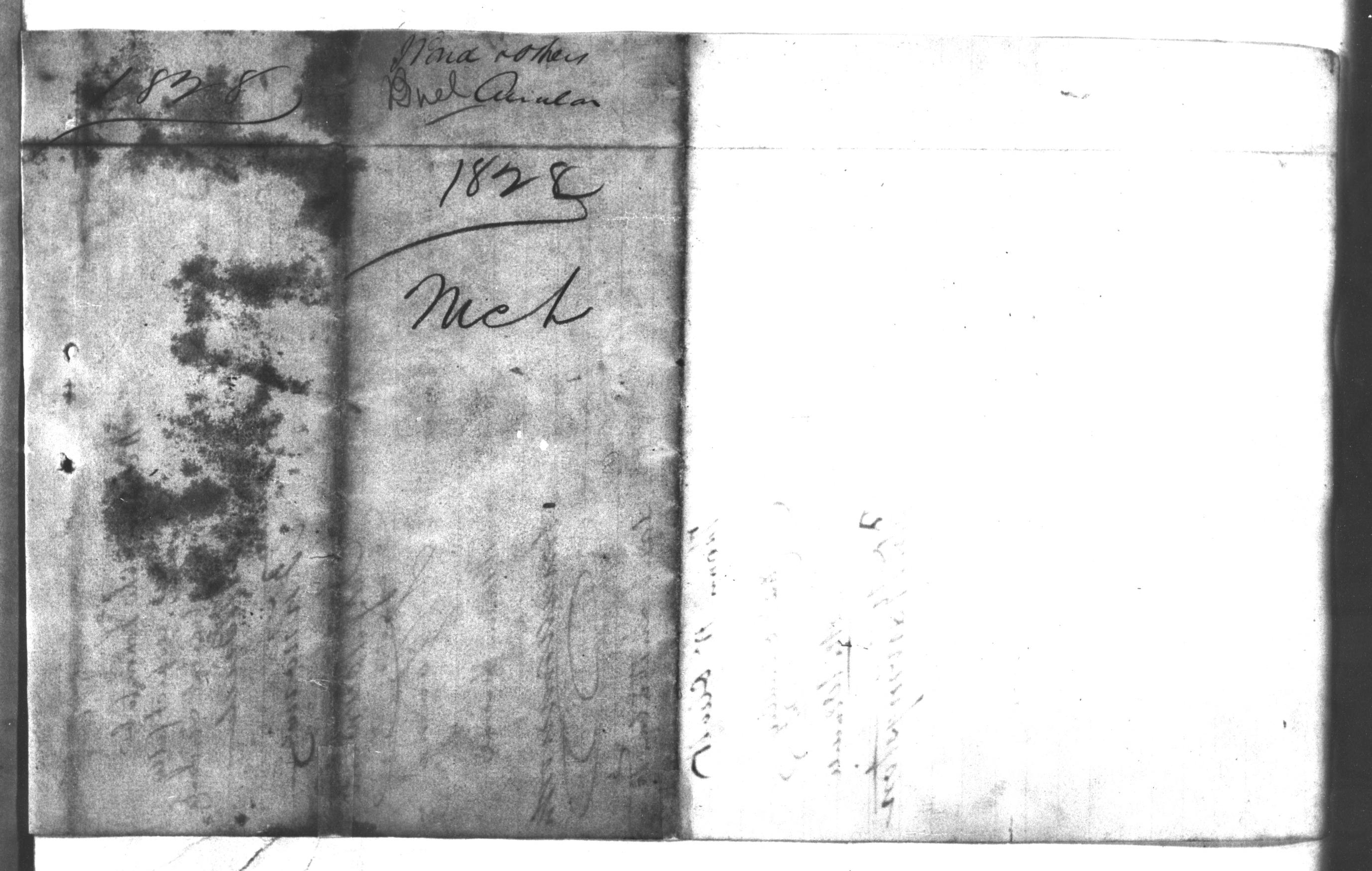