I Instructed—will discharge that duty in good faith—the obligation it imposes—viz to strive forth possed of a will which over looking local & personal consideration shall secure fair <politics> to the great interests of the country viz. The <manufacturing> & the <illegible> of the raw material—not to <call> for individual cupidity, or oppress one section of the Country for the benefit of the other.

2d. The House of R. whose sole right it is to originate Bills of that description have sent us a bill which after sixty days discussion is in their opinion but calculated to assist that object.

3d. Would have preferred to pass that Bill in the shape in which it came to us, because first I thought it doubtful to say the least of it whether the amendment proposed would improve the Bill & more so whether the other house would concur in them—in addition for the danger of the bill being lost between the two houses, a danger to which this Bill is particularly exposed.

4. The Committee having <illegible> <illegible> proposed several amendmts & the worthy chairman having manifested extreme anxiety to have them adopted, I have upon my confidence in his superior knowledge and devotion to the cause with great reluctance brought myself to vote for the most of them doubting greatly the propriety of doing so.

5th. Still the Bill meets with difficulties for they proceed 1st. from those who are opposed to the whole system 2nd. From others who are friends of the system.

6th. Have nothing to day to the <illegible>—not quixotic enough to <illegible> that I can make any impression upon them—sorry that if by change of circumstances a system which was originally believed to be for the benefit of all had turned out to be so oppressive <illegible>—effect it ought to have upon the friends of the system—will upon me.

7. But to those who are the friends of the System I must be permitted to say a word or two.

8. It is said the Bill is objectionable & why— Heretofore the cry agt. the measure was that it gave a <illegible> to the raw wool which was said to be so extravagant as & &c no American proposed &c Impossible in the nature of things to get a bill <illegible> Tariff of 1824.

I. The draw back on spirits made out of molasses.

I The article has to contend 1st. with foreign Spirits

2 with Spirits made of grain.

2d. See how the whole bill operates on it so far as it competes with imported spirits, and additional duty of 5 but on the molasses repeal of drawback <illegible> of 4, making nine—by the bill 15 Cents additional duty on the imported spirits, leaving still an advantage of 6 Cents in favor of the domestic over the foreign Spirits if the bill passes as it is & 10 if the draw back <carries>

3d. Its competition with Whiskey.

2d. <illegible> difference only one Cent not sufficient—this will make it if the bill passes as it is 10 Cents not too much

4. The great amount of <strong> Spirits & with respect to which they are protected

2d. Molasses—so far as it <covers> <manufacturing> they are <gaining> except the Whiskey as to that portion <illegible>-<illegible> stand on the same footing with the rest of her fellow Citizens.

4. Portions of the Country which loose all

5. Duty to cultivate knowing this the only duty that will benefit the <illegible> <illegible>

6. Effect upon the probable fate of the Bill. 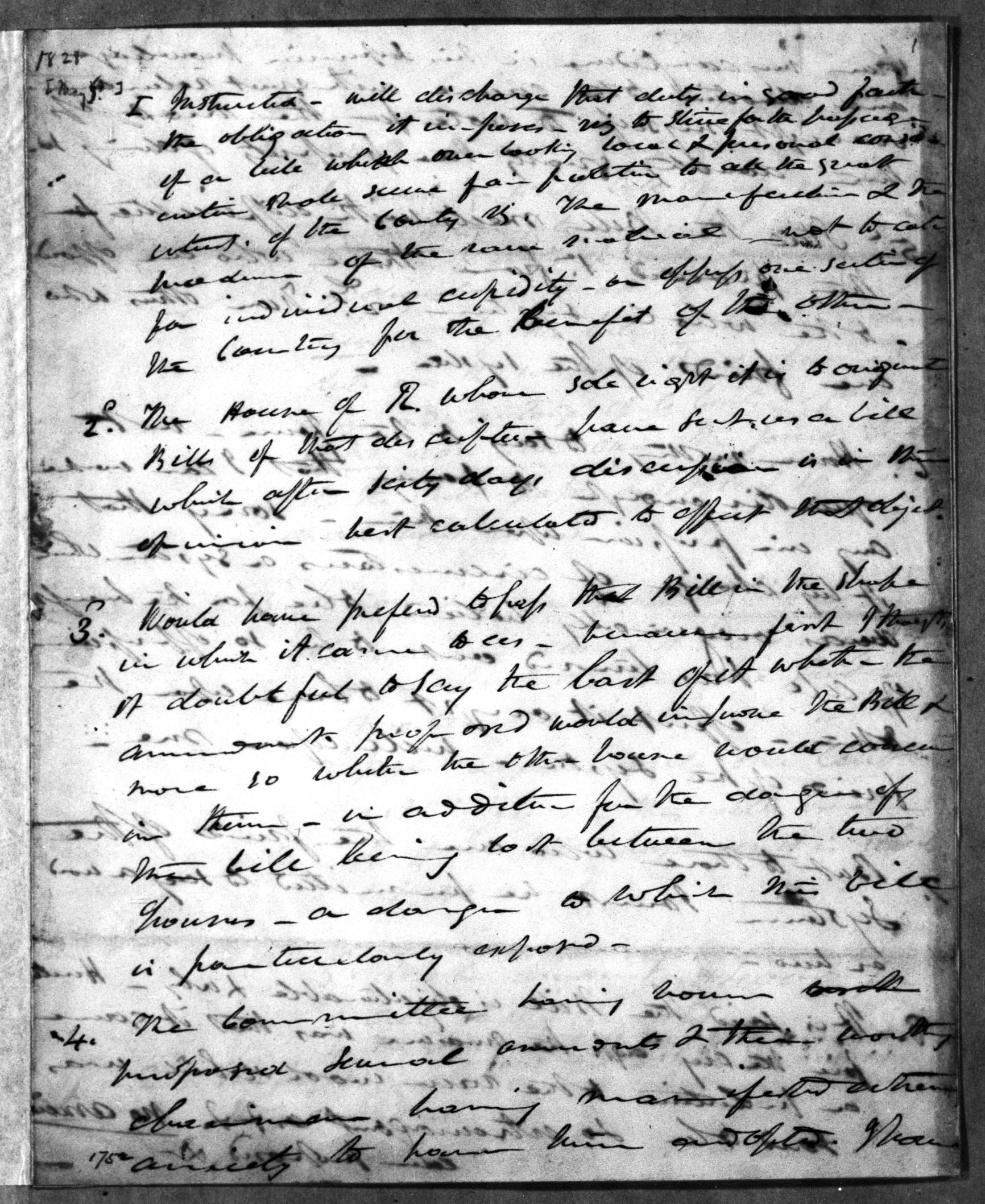 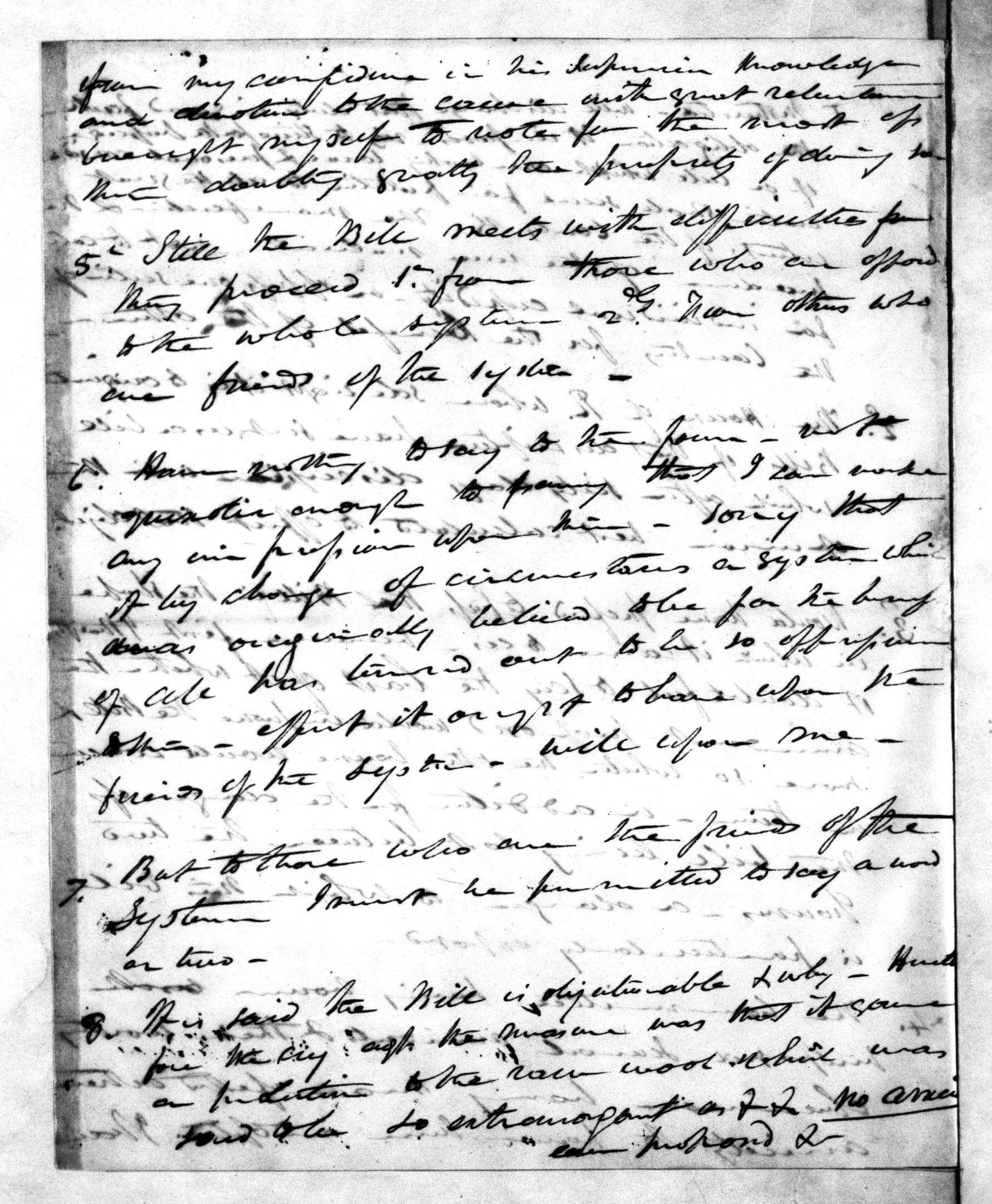 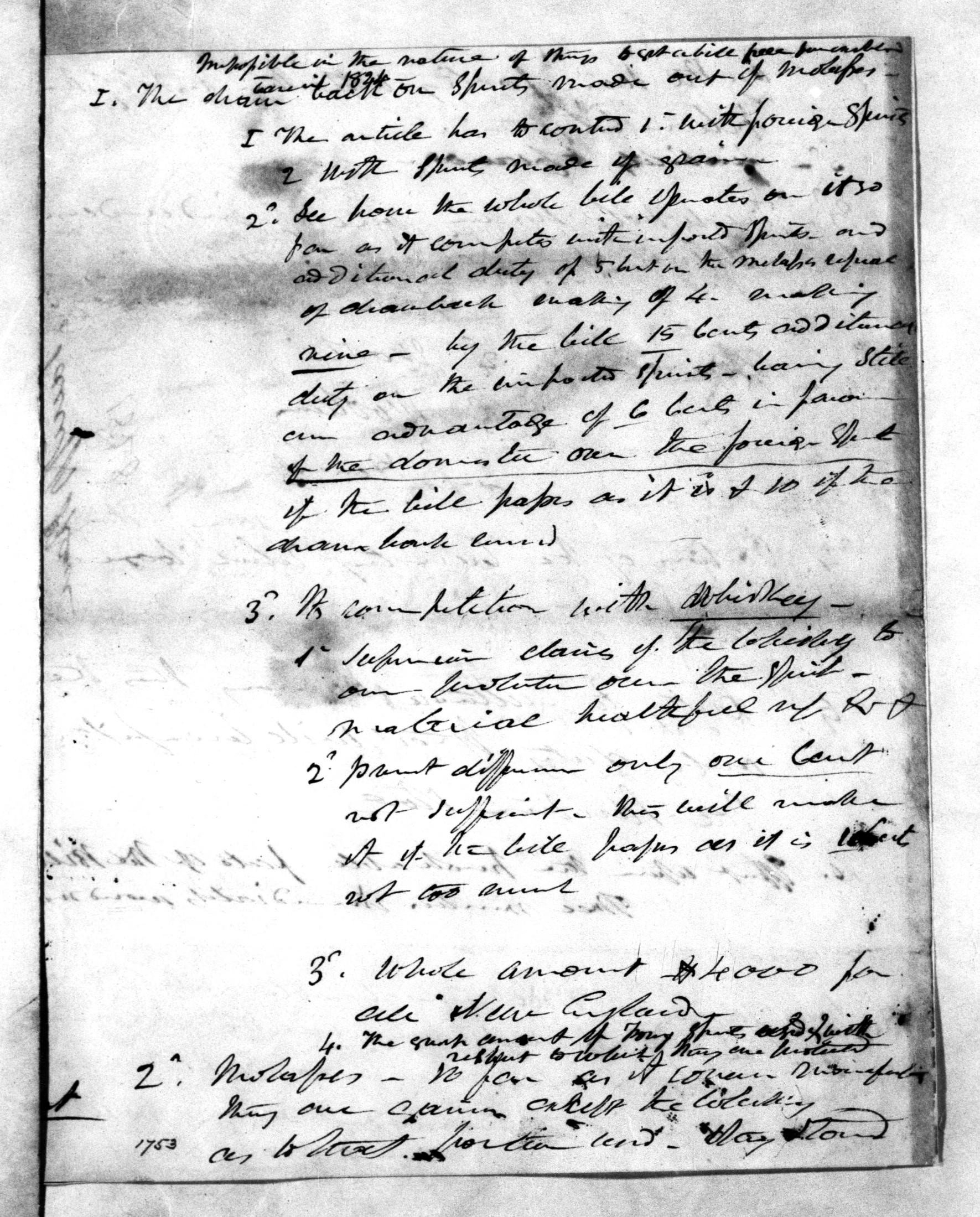 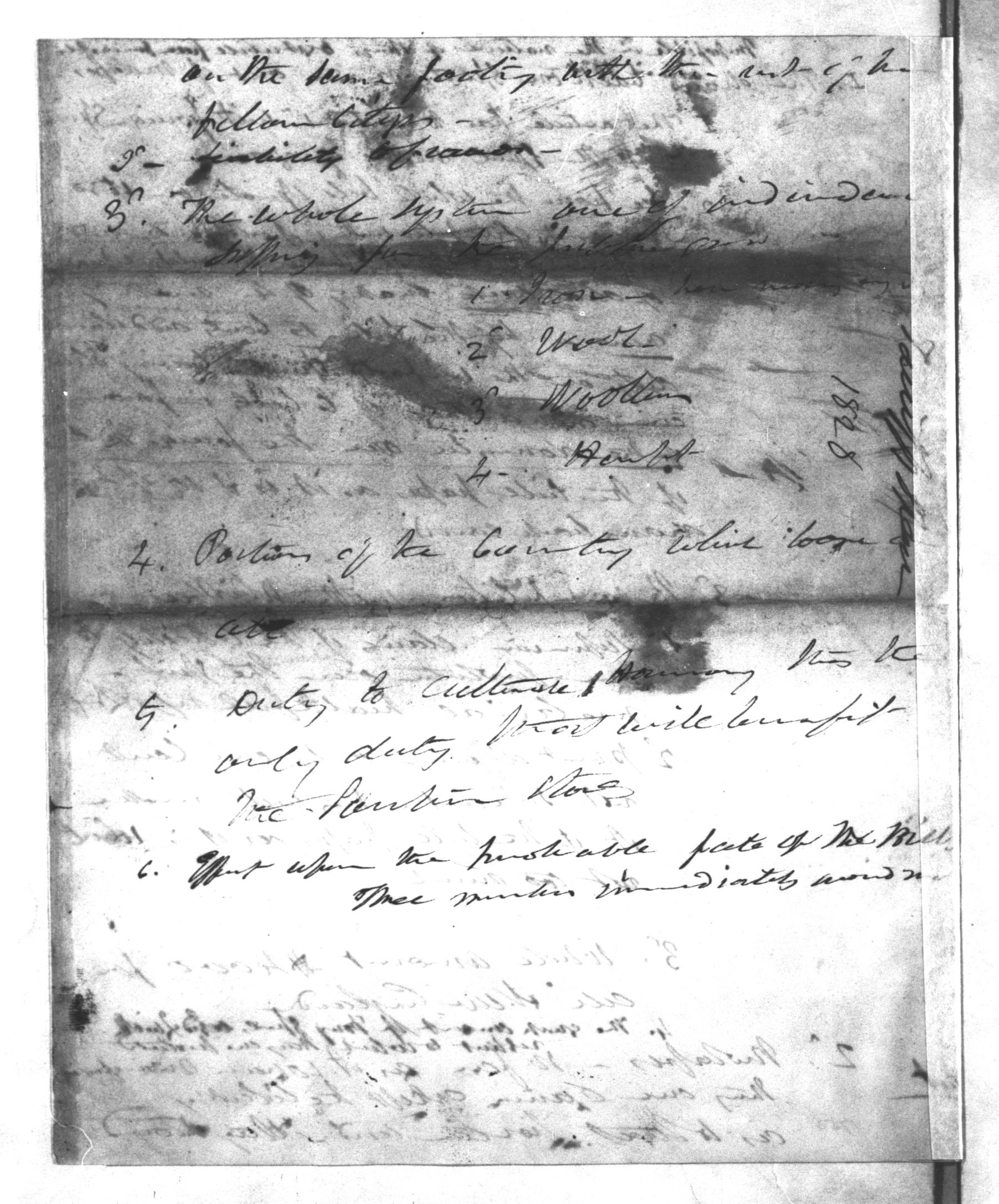