I owe you an excuse for not having before written to you. I have been unwell. My symtoms have been more alarming than the direct disease. After severe confinement to official duties in December I began to raise blood which I supposed came from my lungs and I continued to raise it in small qualities almost every day since till the last four or five. In this state, threatened with a confinement through a long winter and oppressed with official concerns, I am free to confess I have indulged many apprehensions about myself, perhaps more than I ought to have had. I have had little or no opportunity, and less than usual inclination to attend to political affairs.

We have our difficulties which I hope are not greater than we shall be able to surmount. These difficulties arise from four sources. The diversity of views relative to a caucus, the tariff, the anti-masonic excitement in the west, the character and conduct of those who have joined us (for I suppose I must not call them allies).

Almost the last caucus we held on the subject of the presidency we resolved against state nominations; and now to make a state nomination is represented by some honest republicans as a gross inconsistency. New York never made but one state nomination of a President, and that was (I suppose you recollect for your enemies of often enough reminded you of it) the nomination of DeWitt Clinton. This deviation from a uniform course is not with republicans an authority for a second deviation.

A Caucus however is to be held on Thursday evening. I cannot speak confidently as to the attendance of the members. I think it will be pretty well attended but not so fully as we once hoped. The Electors have been in some instances disappointed. Your old Friend Sandford of Essex is an administration man, Lynde of Chenango who received his nomination on the pledge of his friend that he would go for Jackson is strongly Adams. Our friends in the antimasonic part of the state dare do nothing except decry secret society ^societies^ because they are apprehensive of bad consequences in that region.

Peter R. continues to behave mischievously and is probably in the hands of Peter B. who is still more mischievous.

Mr Clinton does not, that I know of, study to embarrass us: yet the senate are embarrassed by some of his nominations.

There are a few cases where his nominations present this question—Shall the senate remove an incumbent who is ^has been^ a uniform republican but in favour of the reelection of Adams or by the appointment of a uniform clintonian who is decidedly in favor of Genl Jackson? A discussion upon this question at this moment in our present pasture of affairs is truly embarrassing. “Much may be said on both sides.” Our true friends in the senate do not fully harmonize in their views in relation to it. I am exceedingly reluctant to say any thing to you on that subject about which I fear the most–the tariff. I have written a hasty line of two to Wright but what ^they contained^ I do not distinctly recollect. I judge however that it is what I should not have written from the remarks he has made upon it. I am no oracle; and on that subject as on most others have very humble pretentions to instruct. I do not write upon long reflection but put down what occurs to me “currente thalamo” I know how worthless my suggestions are but that consideration never reduced me to silence when an opportunity occurred to speak or write to such a friend as I know Mr Wright to be. There was last spring a more than half formed opinion that you was hostile to the tariff; this opinion was settling down into a conviction accompanied with some feeling excitement and was doing or rather ^was^ about to do infinite mischief to the cause of General Jackson in this state when at the most auspicious moment that political sagacity <ever> selected, and by the most successful effort that talents ever made, you destroyed by your in the speech you made at the Capital all the works which long premeditated mischief had contrived, and the industry of <personal> political enemies has been many months employed to raise up for the prostration of yourself and the cause you had espoused. This scheme of mischief which I never doubted came from a manufactory at Washington was not only completely defeated but the very materials for similar ones now destroyed. My hopes are that new materials will not ^be^, my fears are that they will may be fabricated for some future scheme of mischief.

It is known that a considerable portion of Genl. Jackson’s supporters in congress will oppose the tariff because they are from states which will not be, or think they shall not be, benifited by it. Hence the fears of friends, hence the facility with which enemies excite jealousies. With the anti masonic excitement in the west which will be turned in favour of Adams because he is not a mason and a manufacturing excitement raging all over the state (except the City of New York) which will, I apprehend, be got up if Jackson’s friends from this state do not all that mortal men can do for the success of such a measure, we should have a difficult and doubtful conflict at the next Election.

You must have patience with this letter, as it is the only one I have written, which when I began I intended should only be an excuse for not having written. 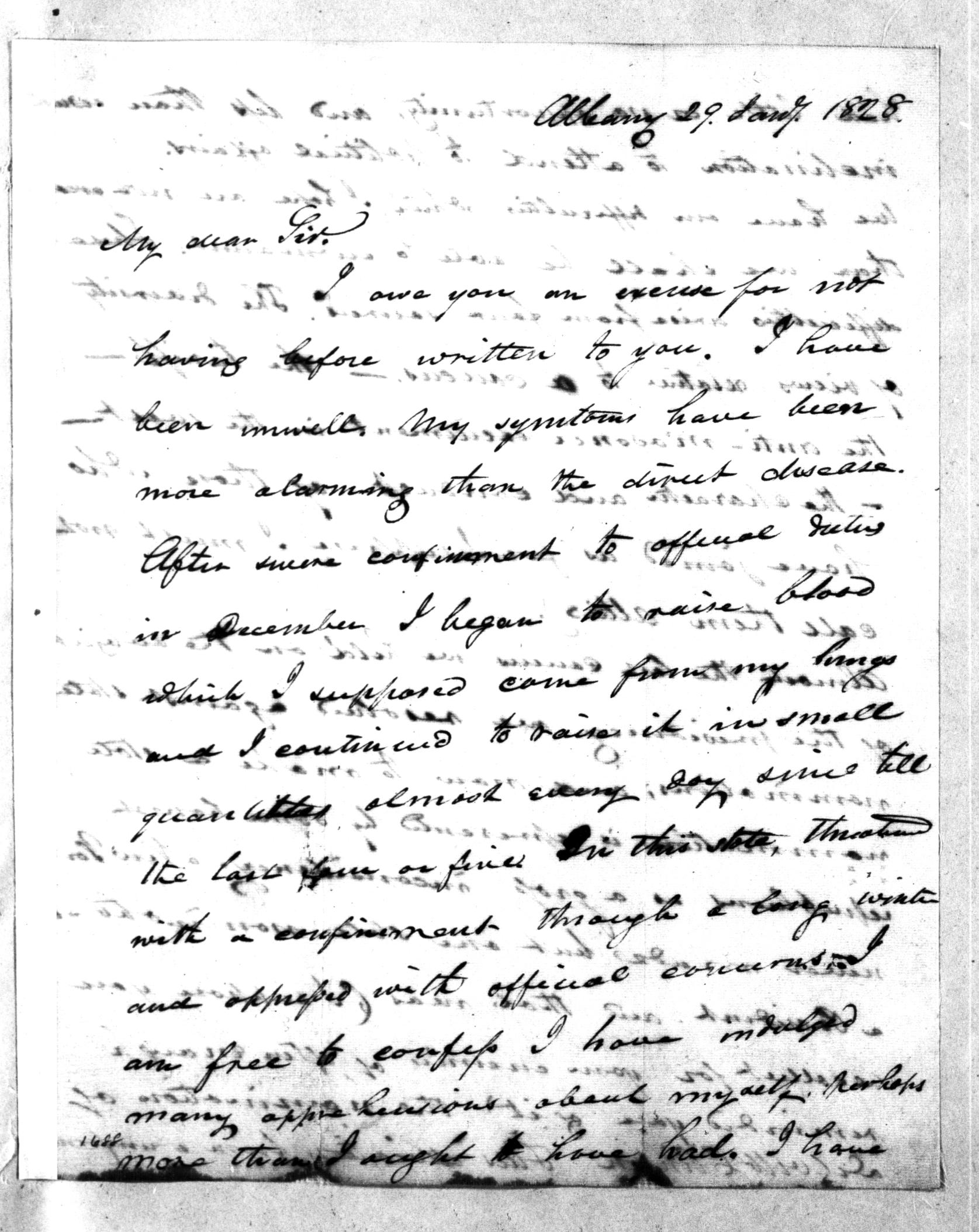 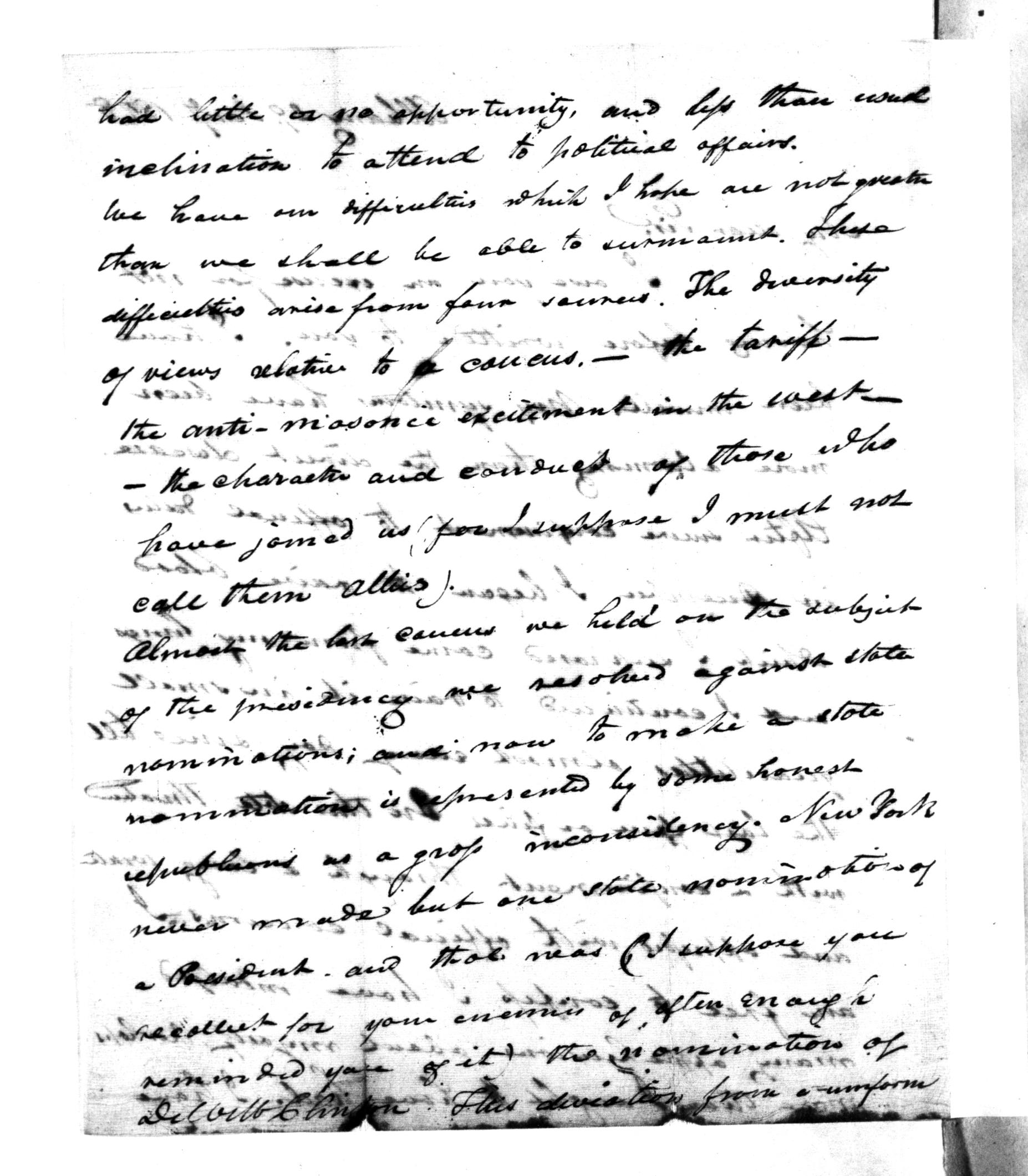 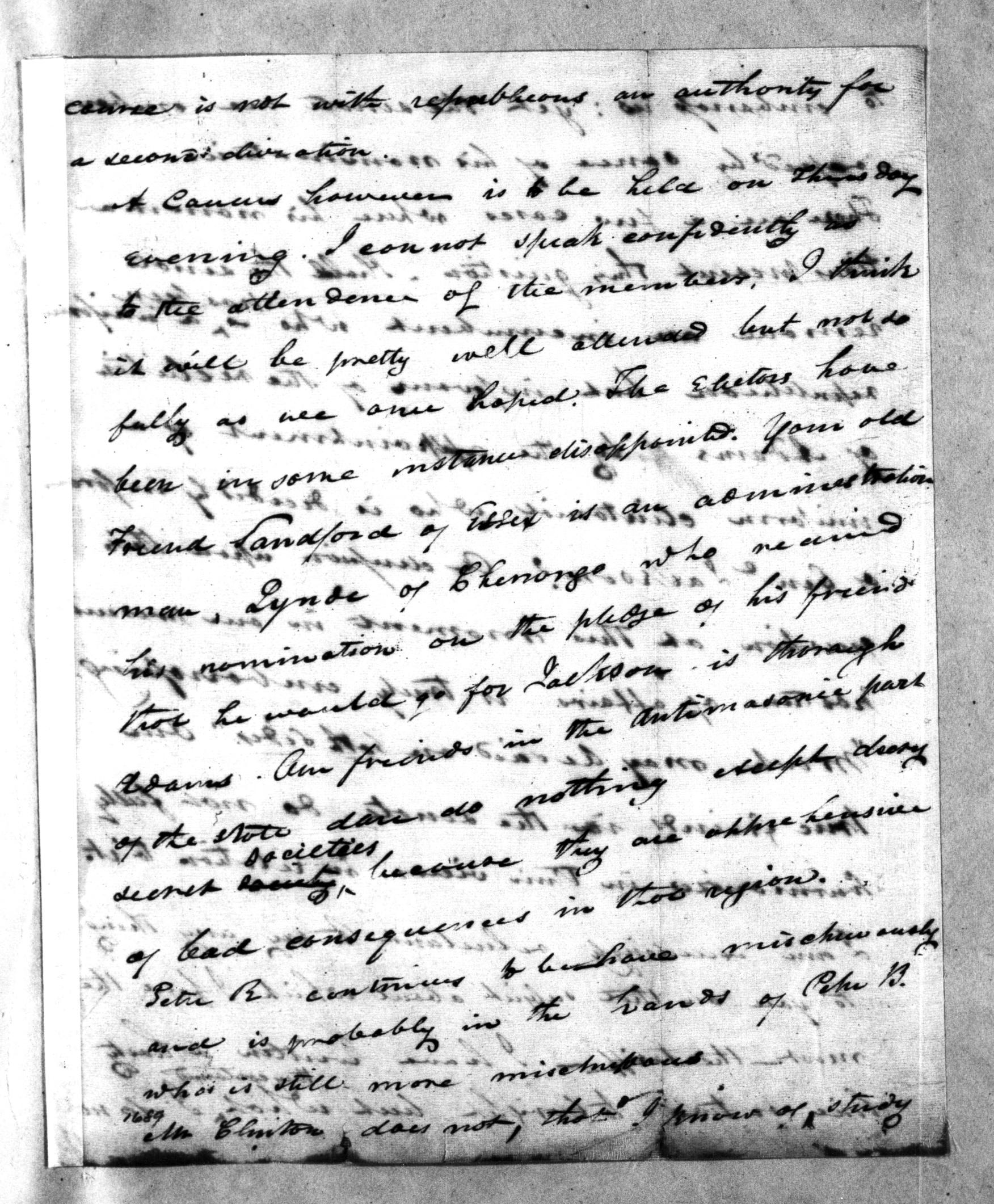 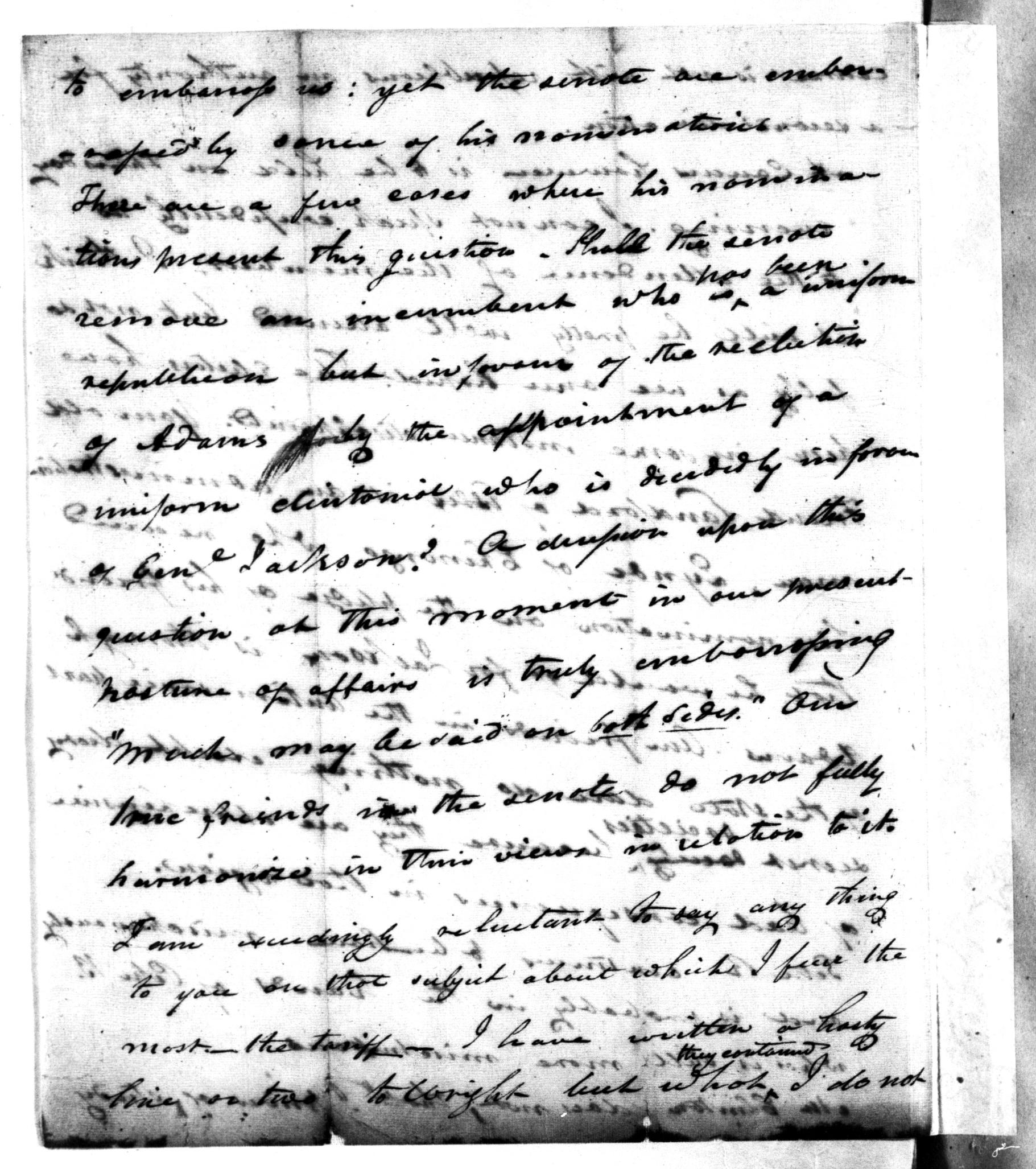 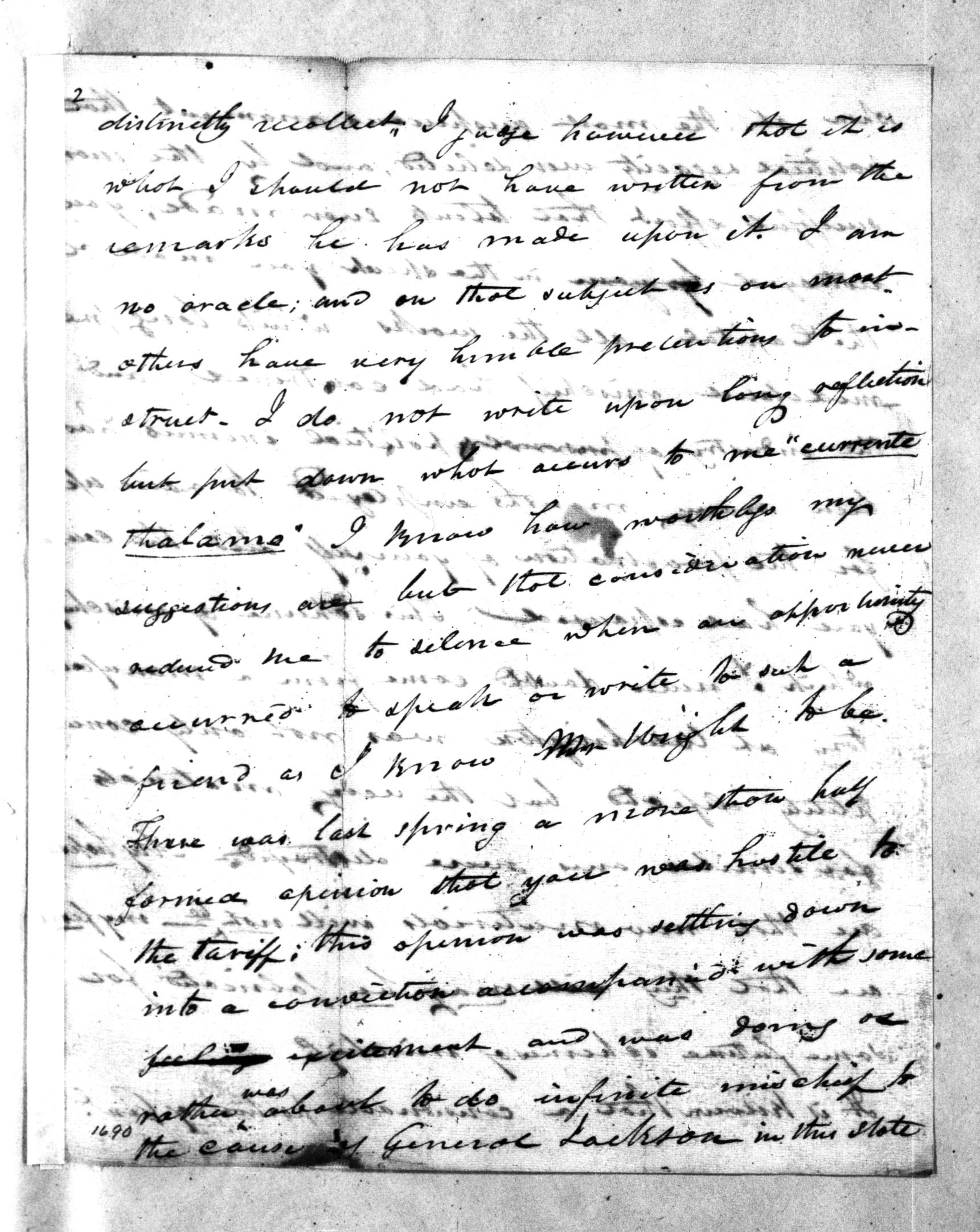 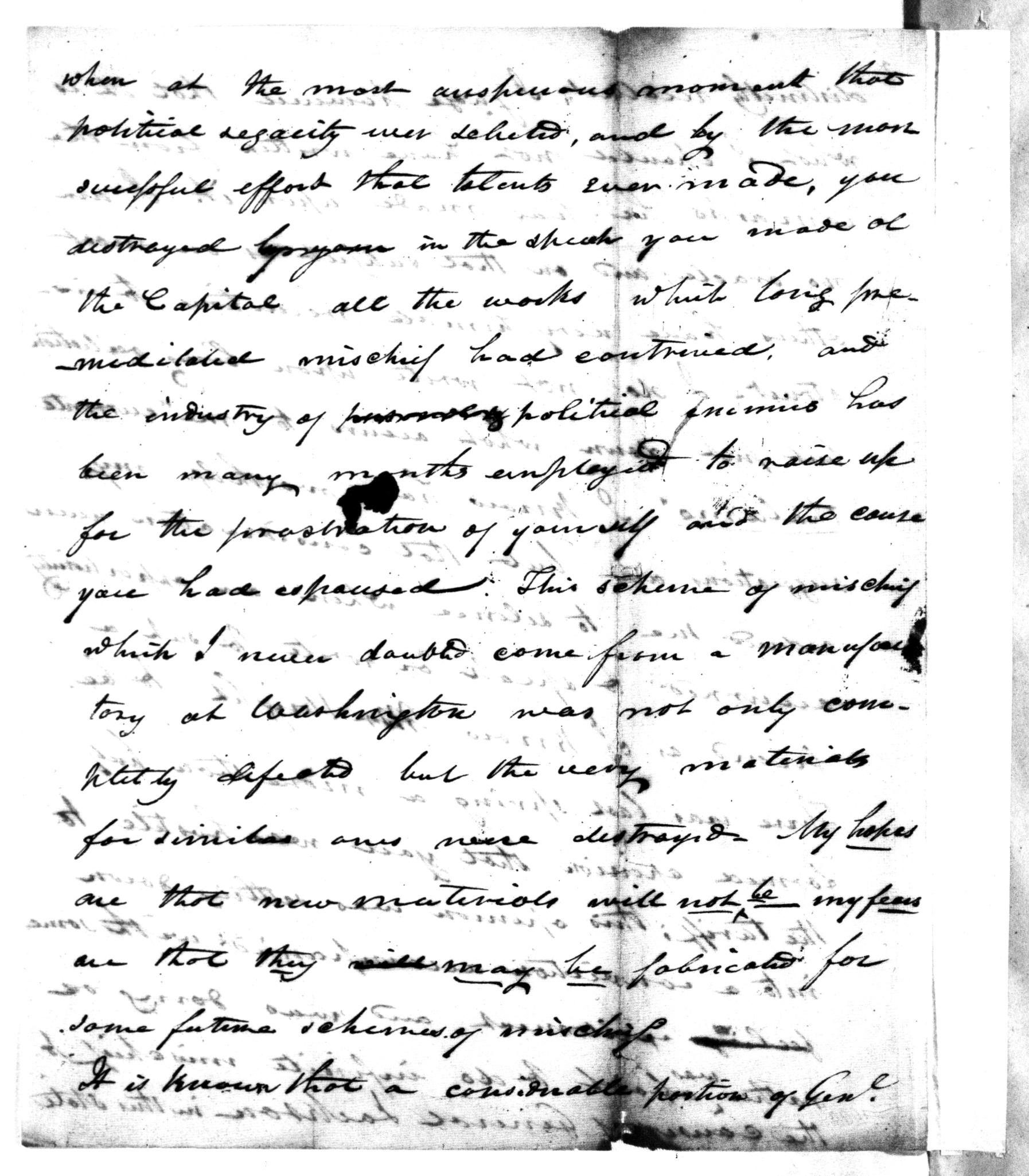 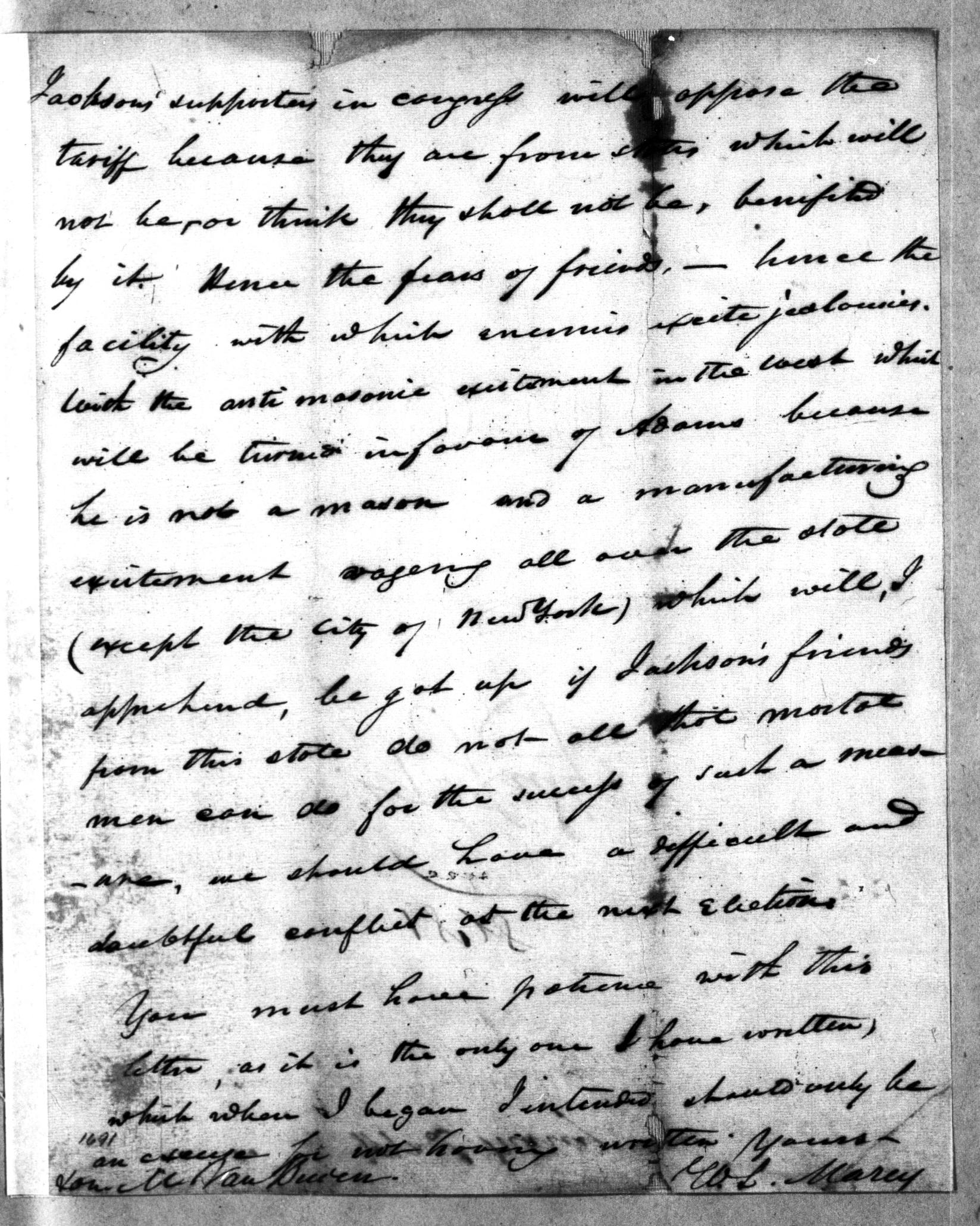 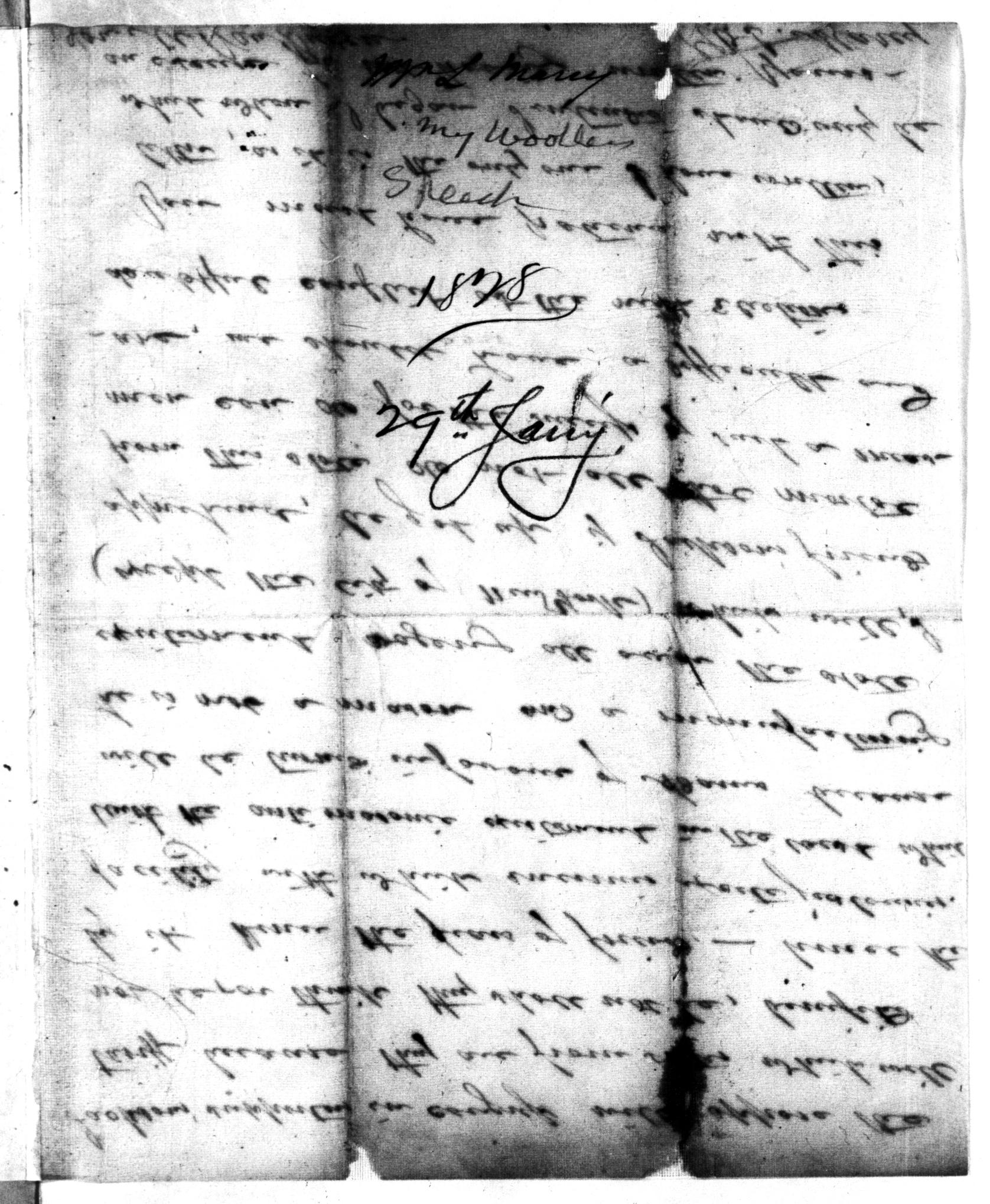