On my return late on Saturday night, after an absence of ten days at my Court in Dover, I received your favor of the 12th. inst.

I am very happy to find that you'r about to devote yourself in earnest to the active duties of the campaign, and I sincerely hope your best expectations may be realised. You need not fear my “confidence in the result”, especially, if you'll be pleased to recollect that, I am a “federalist” of the old school whose independence, if I'm not mistaken, you'll have new cause before this contest is ended to admire. I cannot be indifferent to the result that is most certain, for I consider the great principles involved in the struggle to be too important to warrant indifference, but whether the cause be destined to triumph or to fail will have little influence on my conduct. I consider it a contest for the principles and purity of our republican institutions; I can conceive of no greater evil than the <illegible> of this odious cabinet succession which is <illegible> filled with its greatest danger in the elevation of Mr. Clay ^of^ whose treachery to Mr. Crawford during the last contest I am now properly convinced; the loud denunciation of the freedom of elections, the abuse of the power and patronage of the government, and the hazardous association of all grand national measures with the rise of all of this administration are to me very alarming, and quite sufficient. If I had not the warmest sympathy for my old friends, to stimulate me to <very> honorable exertion & perseverance. I shall do, my duty, and that will sustain me in any result.

I can have no difficulty in giving you the fullest explanation of Mr. Webster's proposition to me during the late election in the H. of R. but I must do it under restrictions, which may deprive you of some of its advantages, but which I nevertheless feel authorized to enjoin upon you. Not a word of what I am <illegible> can be denied by Mr. W. unless he decides to stake ^throw away^ his veracity upon ^in^ this contest, and he certainly has no claim on my forbearance, whether the nature of the proposition itself, or his previous conversations is ^should be^ adverted to. But I cannot consent to have my name dragged as a witness or accuser into the newspaper controversies arising out of this Presidential canvass. I communicated this matter to you at the time, because I had not then, & cannot have now any secret with you. It <illegible> was a part of the history of the day, and I felt <illegible> in relation to that election and my regard for you; that it was proper you should be made acquainted with a part of this character. I am as unwilling now to withhold any explanation, but I absolutely protest against any exposition of my name, at least until I am more fully satisfied of its necessity; & then not until I am consulted.

The proposition was made to me by Mr. Webster in the House of Rep. on the morning of the last Presidential election, and whilst the votes of ^returns from^ the various states were under examination; the two houses being together. Mr. W. came to my seat, and remarked, that if Mr. Adams should not be elected on the first ballot, he had in his possession an important correspondence which he desired to shew me, before he went into a second ballot. I inquired the character of a correspondence which it would be important for me to see, only in the event of Mr. Adams's failure on the first ballot. He said, he had received a letter from a distinguished federal gentleman (whose residence I inferred from his remark was remote from Washington) expressing his apprehension that from Mr. Adams's peculiar relation to the old parties in the Country, he would not be able if elected be able to remove the proscriptions against federalists, and admit them to a proper share in the influence of his administration, that he had written an answer to this letter founded upon previous conversations with Mr. Adams, and before sending submitted it to Mr. Adams's inspection, that Mr. Adams had either altered it himself, or supported an alteration in one or two particulars which was adopted, and that the explanations in this answer were ^would be^ entirely satisfactory in his opinion. He said he had retained the letter addressed to him and the original draft of his answer ^as modified by Mr. Adams, or at his suggestion, I think the former^ which he intended to seal up, to be guarded against accident, and to be used whenever the occasion should call for it; and that he wished me to see it in the event alluded to. I replied to Mr. W. that such a correspondence could have no influence on my conduct in the approaching election, and that I neither desired, nor would it be proper for me in my opinion to see it. He did not name his correspondent, and after receiving my reply immediately left me. I afterwards learned that his correspondent was a member of the H. of R. to whom he read the draft of his answer, with a like account of Mr. Adams, revision of it, but to whom he had not delivered it, or any copy, more than a week after the election in the H. I have above given the substance, if not the honor of the conversation between Mr. W. & myself.

My family desire their best regards to you, and I am, My dear Si[r]

Do let me hear from you, often; for I am very anxious for you <illegible>. 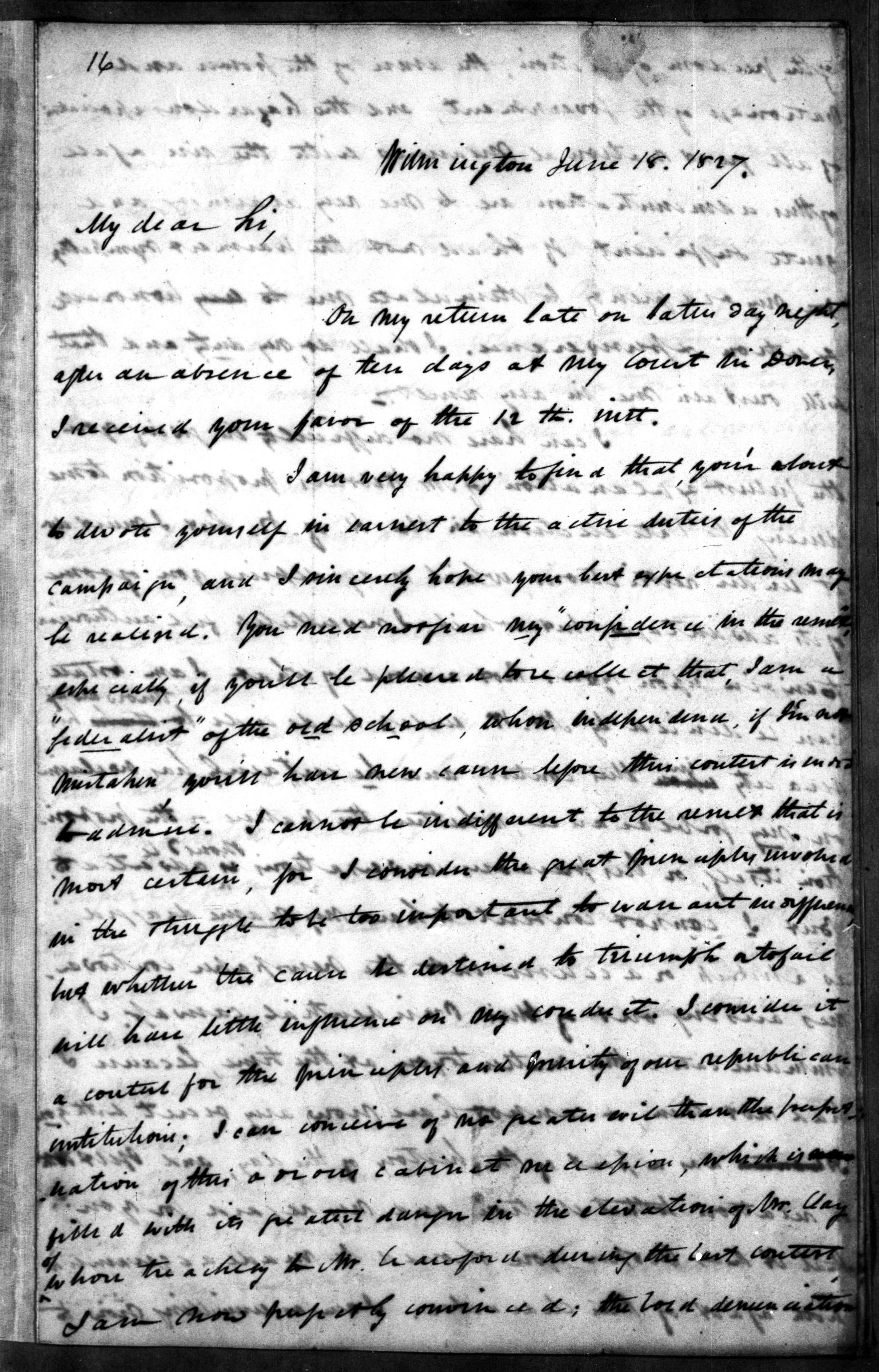 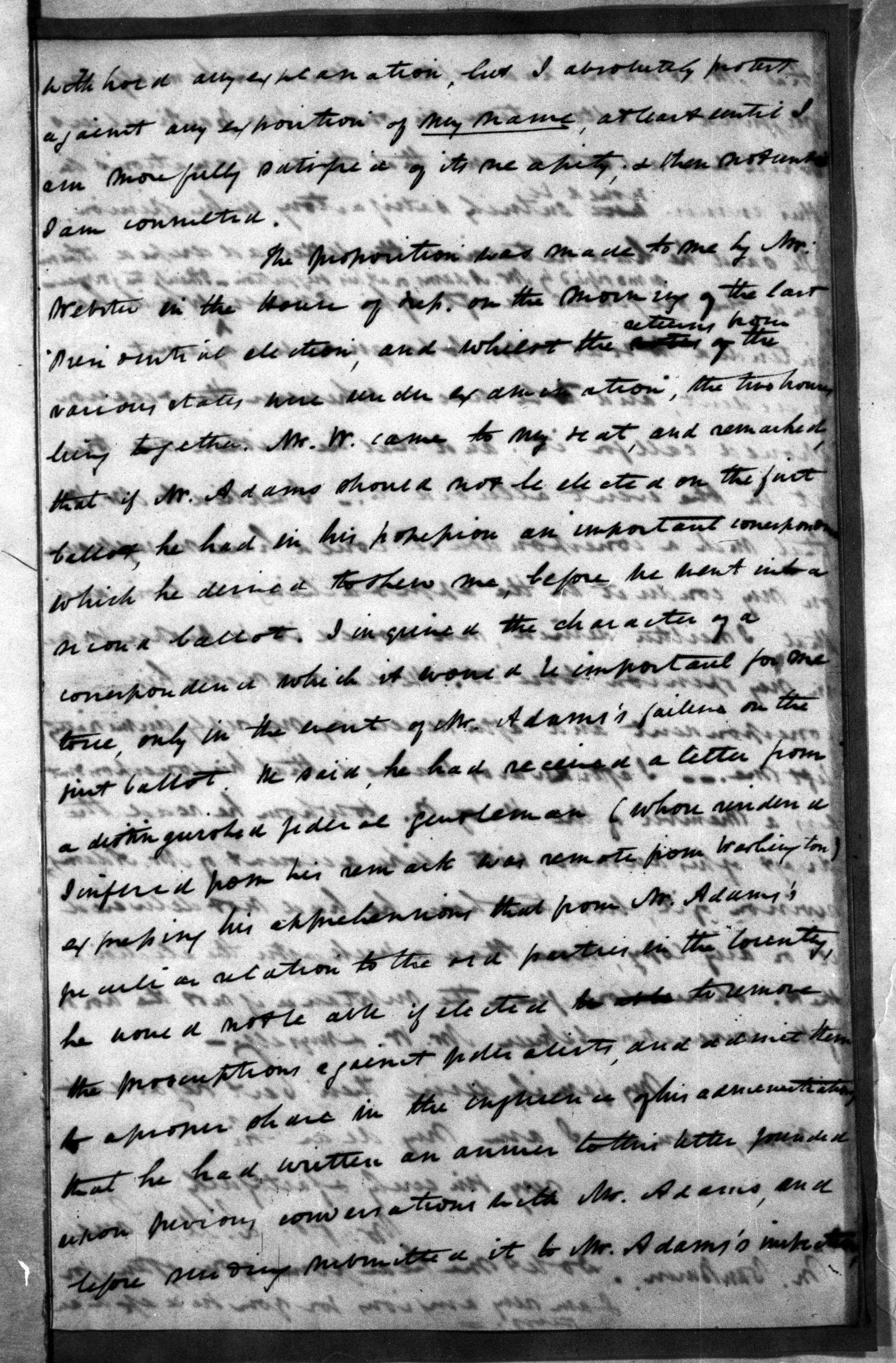 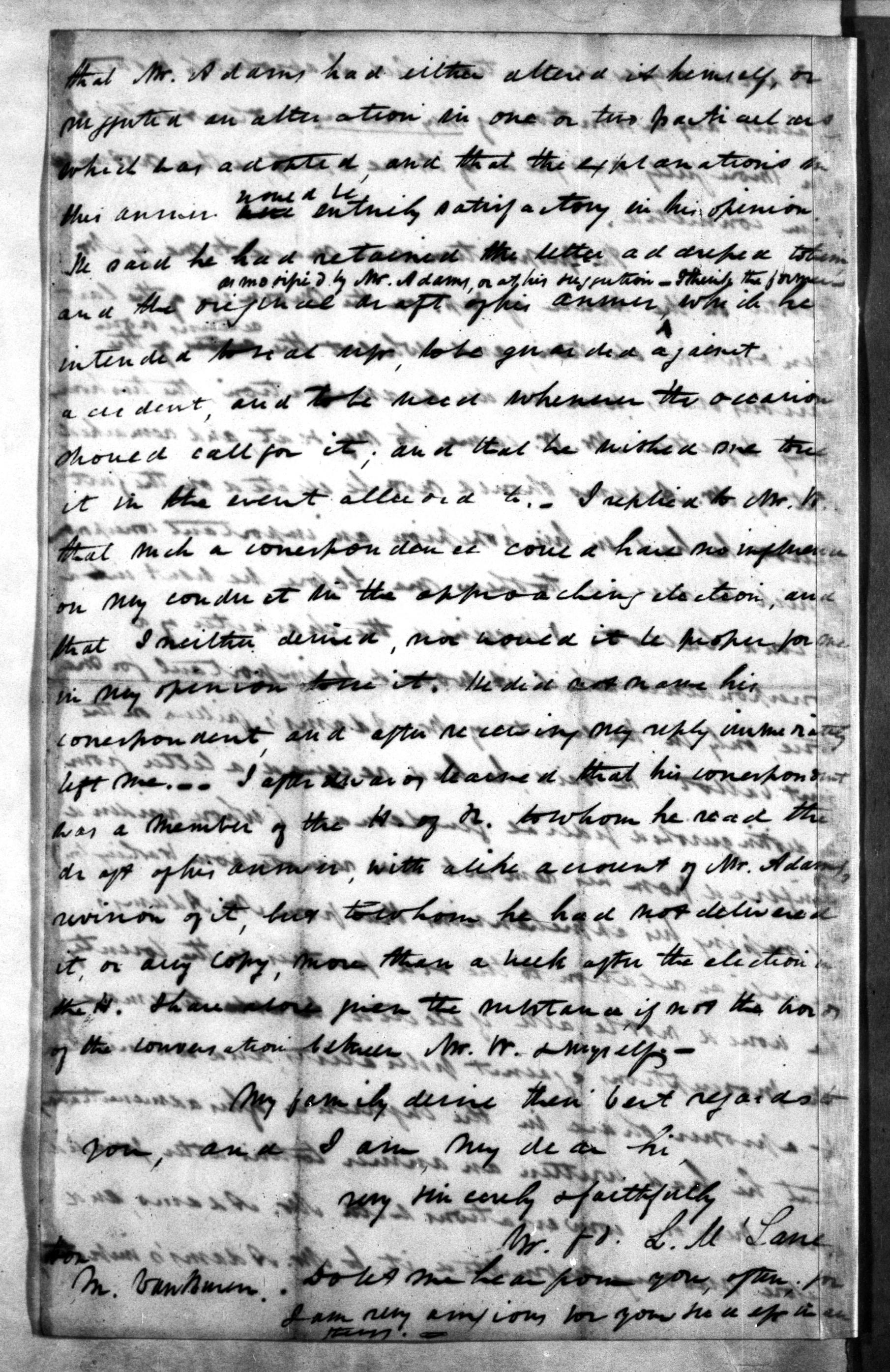