I cheerfully embrace the opportunity which you have offered me, of expressing my opinions upon the subject of a Bankrupt act.

I do not know whether to refer the extreme anxiety which has been awakened upon this subject, to the promise which it unfolds of an ample harvest to the lawyers, or to facility and thoughtfulness <illegible> with which not novelties are usually embraced. But I am persuaded that a large majority of those who are deeply interested in the question & have given themselves the trouble to reflect upon it, will confirm my opinion that disastrous consequences will follow the passage of a bankrupt act.

My first objection is of a local character, and should have some weight with you individually, particularly of other considerations should be nearly balanced. The provisions of the bill which you have sent me, including the proposed amendments, are decidedly in favor of the debtor, and it is not likely that its complexion will be changed by any subsequent alterations. You represent a creditor state, and so far as you can draw a distinction between the claims upon you as a representative of New York, and as a legislator for the Union, you should embrace this fact in your estimate of the good and evil which the bill offers.

The important general objections to the system which the bill develops are the heavy expences attending it and the unavoidable incapacity of its agents for the settlement of commercial affairs. The Committee is no doubt possessed of copies of the various examinations which were held by the Committee of the House of Commons upon a similar occasion, and which resulted in proof that the average payment by Bankrupt Estates from 1818 to 1825 was less than a half-penny on the pound. We have no reason to expect that the administration of our law will be less oppressive to the creditor.

I am assured that the expences under the commission for a & S. Richards & Co who became insolvent in 1825, have already exceeded £8000~ and that the estate when settled will have paid £40,000 less than if its concerns had been closed by the debtors. It is indeed true that if the price of cotton had advanced instead of declining, during the period of indispensable delay, a different argument might have been drawn from this case, but it would have been delusive, for the objection would have remained that the unavoidable delay & complexity of the system prevented that agency of the sagacious head and active arm which perceive the proper moment & seize the surest means.

Another objection is derived from the extreme difficulty if not total impossibility of defining the classes which shall be the subjects of the Law. It was this branch of the subject which produced the most anxious discussion in England, and with us the embarrassment must be infinitely greater, for there the divisions of labor and employment are distinctly marked, while here the centering of different employments in one individual, and the easy transition from one to another will enable a creditor to be or not to be a subject of the law at his own election.

I have seen a statement that the Commissioners in the case of Fauntleroys house have applied 60 times to the Lord Chancellor for instructions. This must be sufficiently oppressive in England where the general adviser can be reached in 3 days from any one of the more important districts in which the law acts. But who shall be our Lord Chancellor? Shall he reside in Washington, and be consulted sixty times about a bankrupt estate in New Orleans or in Maine? Or shall we have a court of appeal in every state, and double the number of functionaries to strengthen the power of the General Government? This consideration is worthy serious examination, not only as it relates to convenience and economy, but also to political expediency.

There are countless instances of a debtor being involved in difficulties which he over comes by a resolute struggle, but not without committing a technical act of insolvency. In such instances the impatience or malignity of a single creditor for a small amount, may destroy all the efforts of a generous ardour and honest pride. In such cases there should be an appeal to the ^a^ meeting of the creditors generally, or such other corrective should be introduced as the wisdom of congress might suggest.

I have stated the probable incompetency of commissioners to manage properly the concerns of the various estates entrusted to them. It may be said that the circumstance of the allowance for the support of the Bankrupt being left at the discretion of the Commissioner, will enable him to secure the advice and co-operation of the debtor. But in the majority of instances the value of the estate will be so small that adequate support cannot be afforded, and on the other hand those bankrupts whose effects amount to a large sum will have an inducement to procrastinate proceedings <illegible> that they may the longer derive a support from the property of their creditors.

I consider the per diem allowance to the Commissioners and clerks as very exceptionable. In a dearth of business it will induce unnecessary delay, and it would be much better to fix an annual compensation to be regulated by the probability of more or less duty to be performed.

The limitation of 6 months in the last proviso of Sec 1 appears too short. If for instance a creditor should be defrauded in the manner specified page 1 ¶14.15, I do not perceive why his claim to redress should not be as good when 6 years have elapsed, as within six months. In conclusion I would remark that the moral feeling of the commercial community is not such as to require a bankrupt act. In the countless causes of insolvency in which our house has been interested, we have never seen an <illegible> ^instance^ of unjust or revengeful feeling towards a debtor. The reverse is true, and we see constant indications of a lenient and indulgent spirit. This remark is founded on the belief which I have already expressed, that the law is for the relief of debtors. Whatever may have been the design of the framers, the result will certainly be that the average dividends upon insolvent estates will be materially diminished.

I intended to have made you an earlier answer, but a good deal of business, and a sufficit of dissipation, together with my interest in the mayorality question, had fully occupied my time.

One word more, and this intrusion upon your time will be finished.

The notice which Mr Adams and the and the Solomon of the Treasury have taken of the conduct of the officers of the Customs in Philadelphia, in the Thomson case is shamefully indefinite and palliative. The political weight of Pennsylvania has been more than a counterpoise to the claims of justice. As your friend the Judge of Israel says, verbum sap. 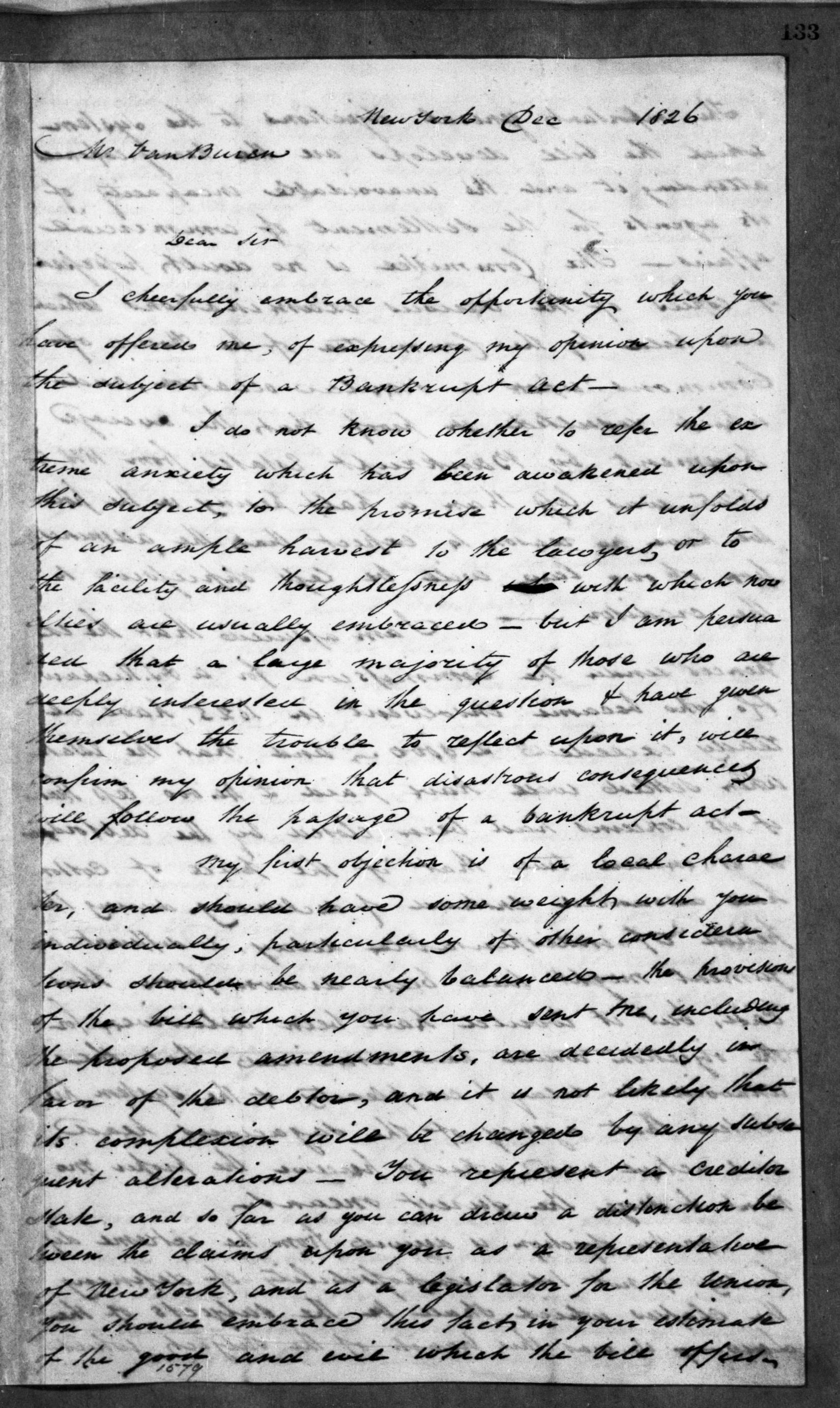 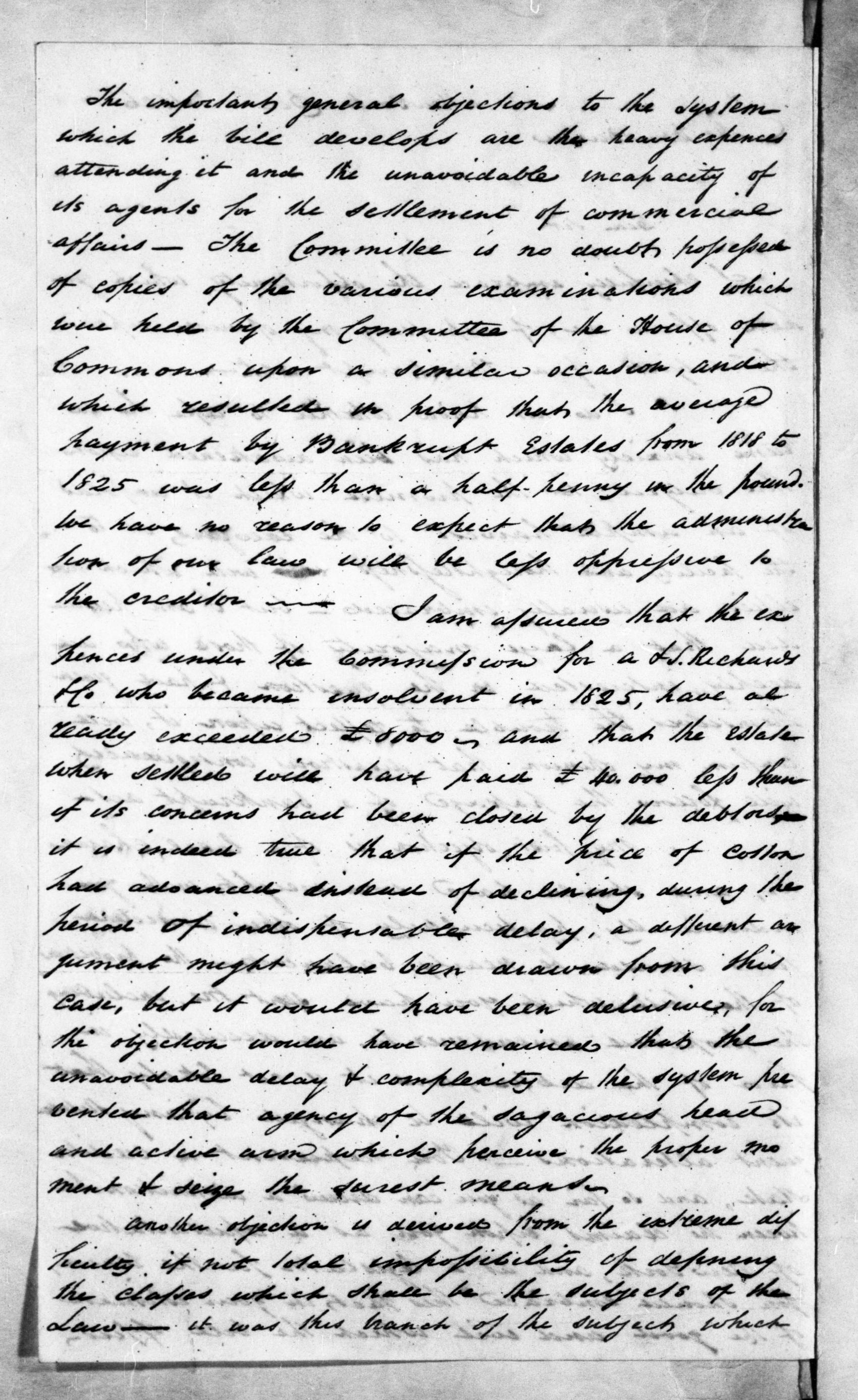 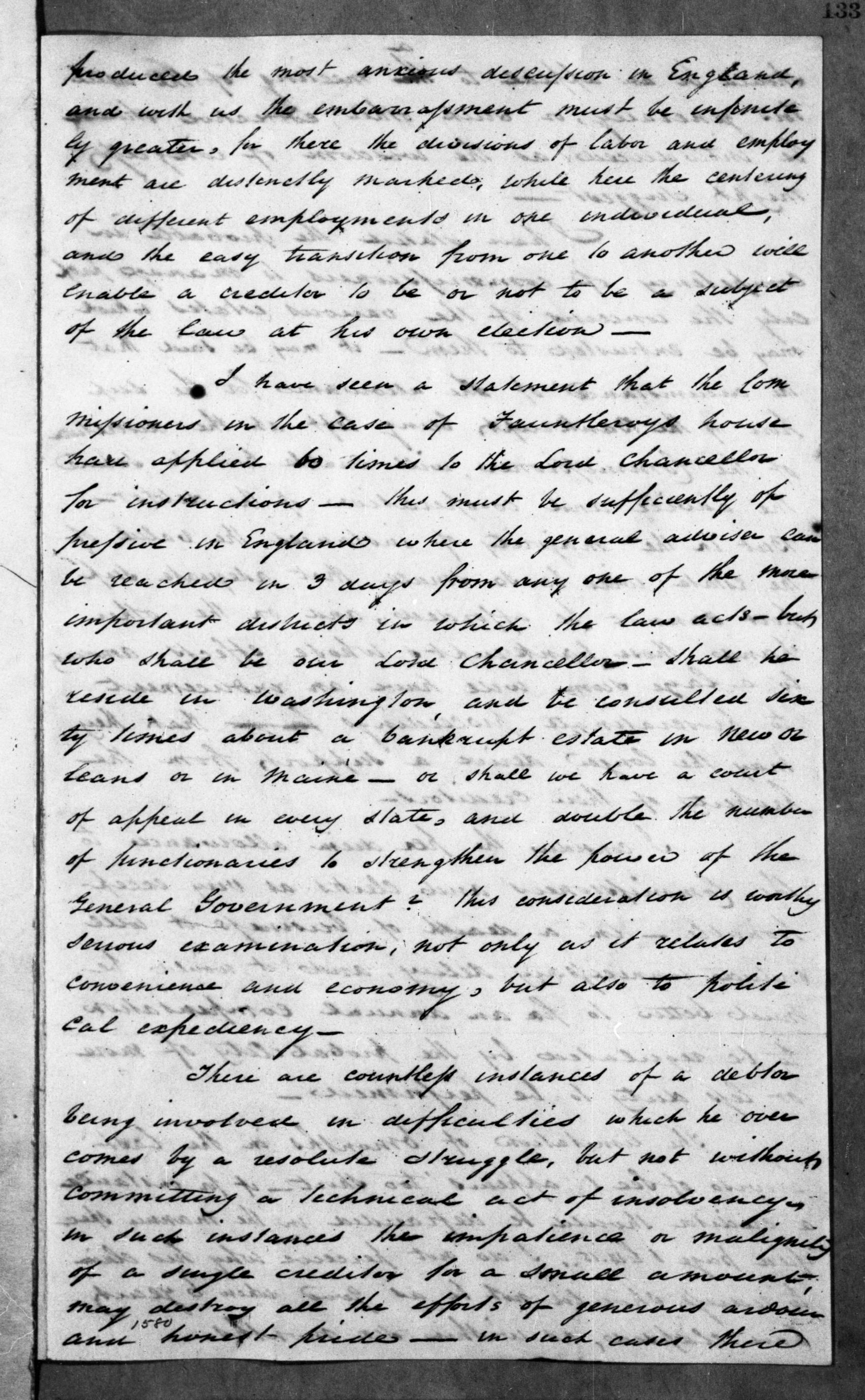 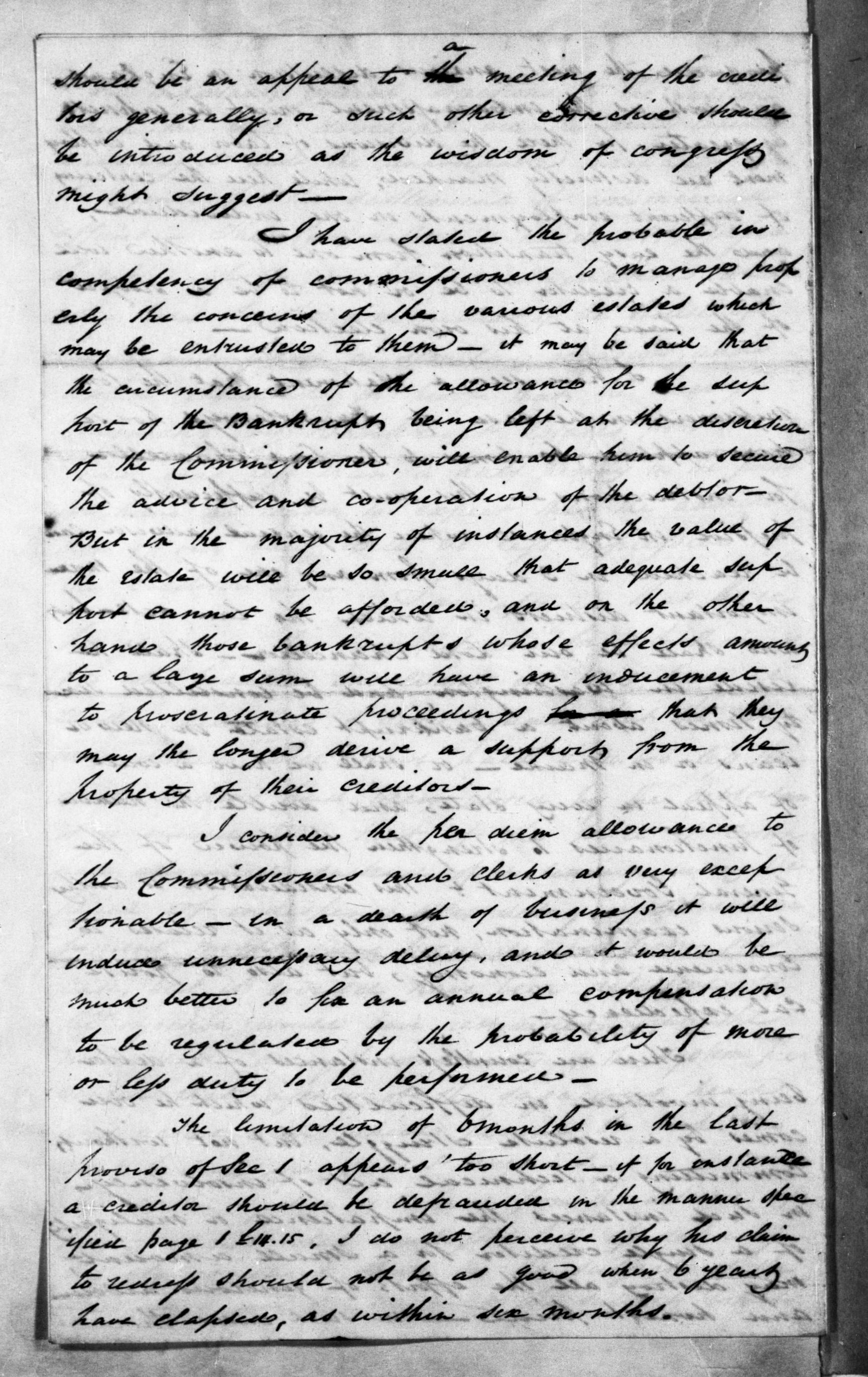 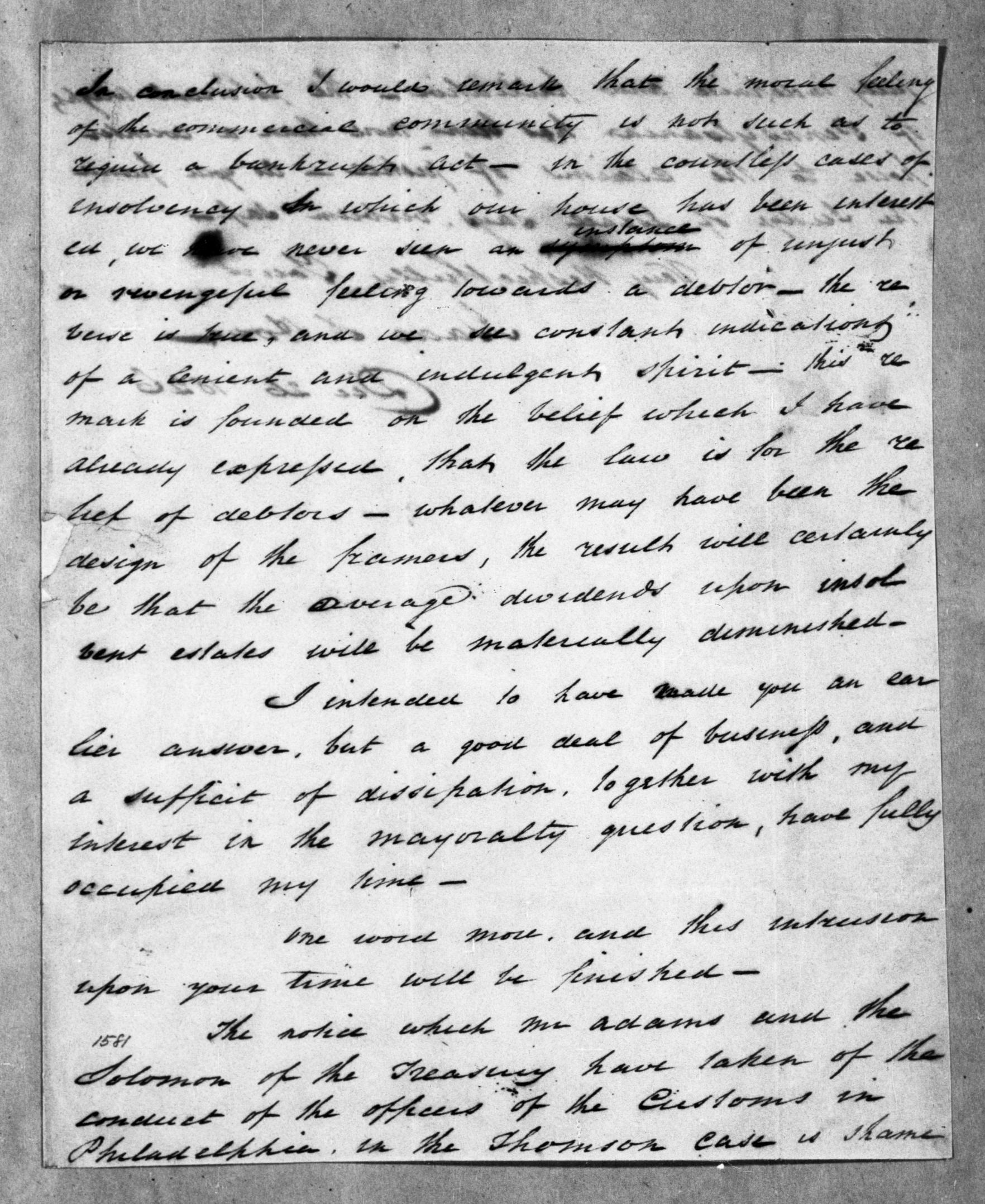 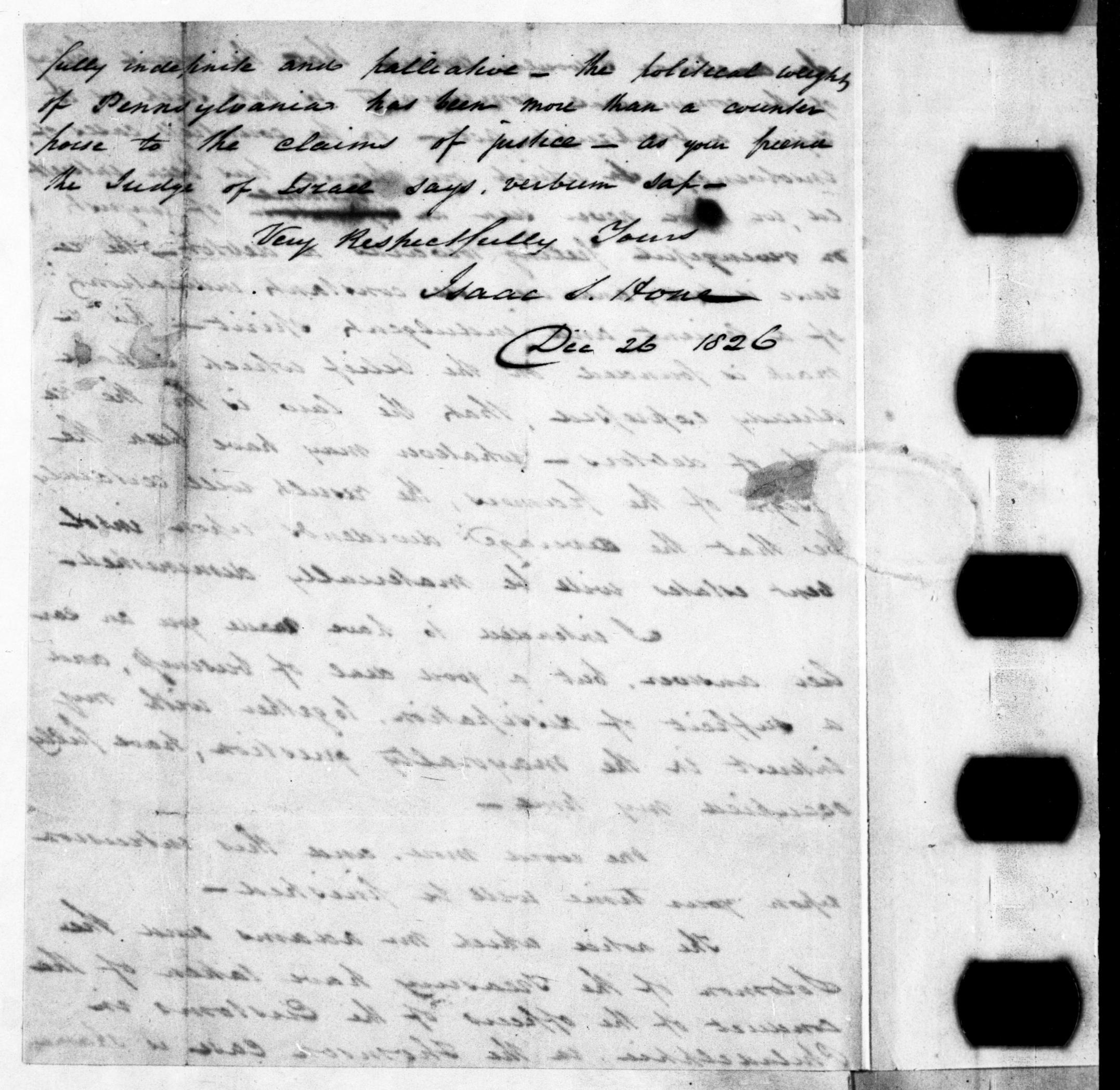 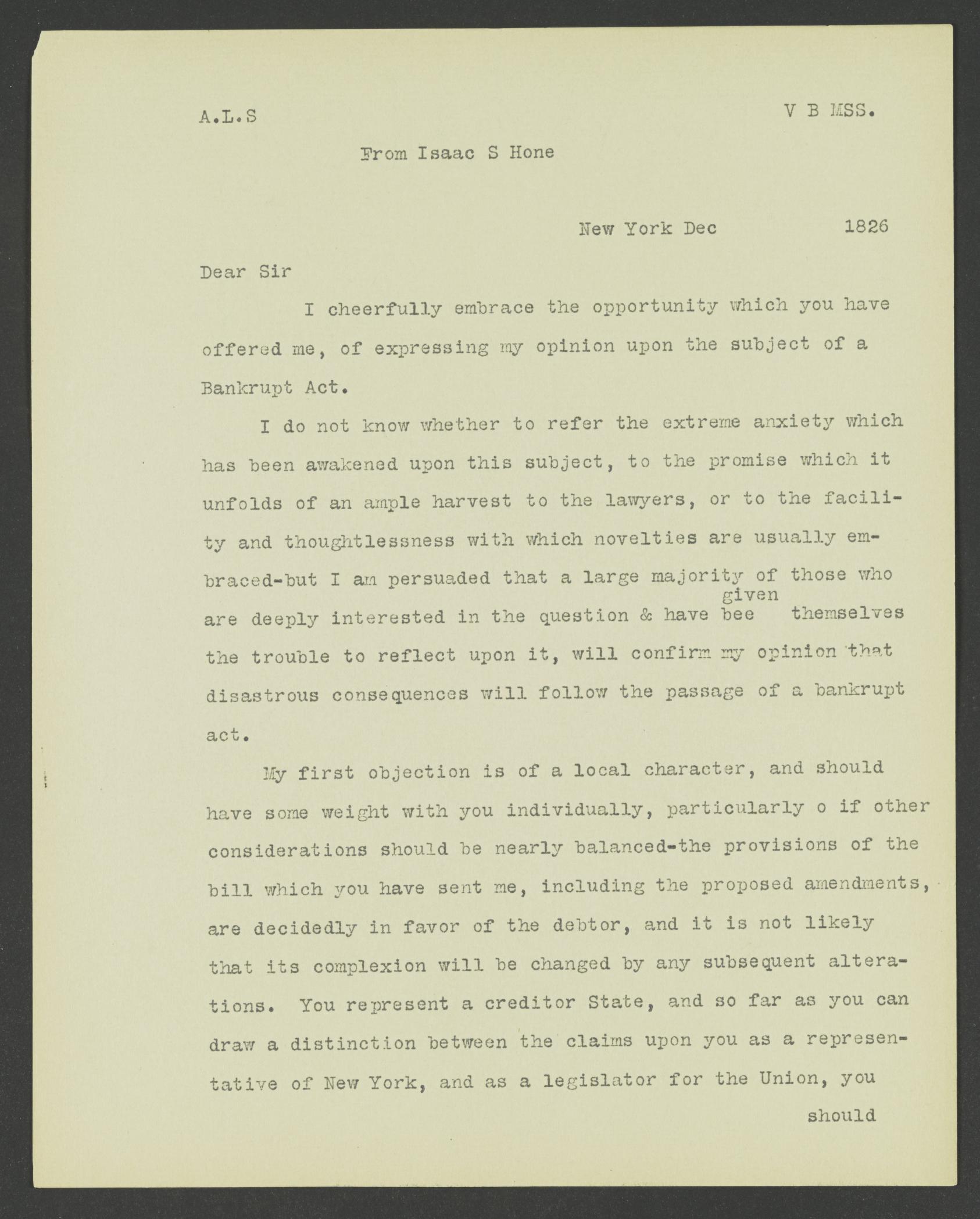 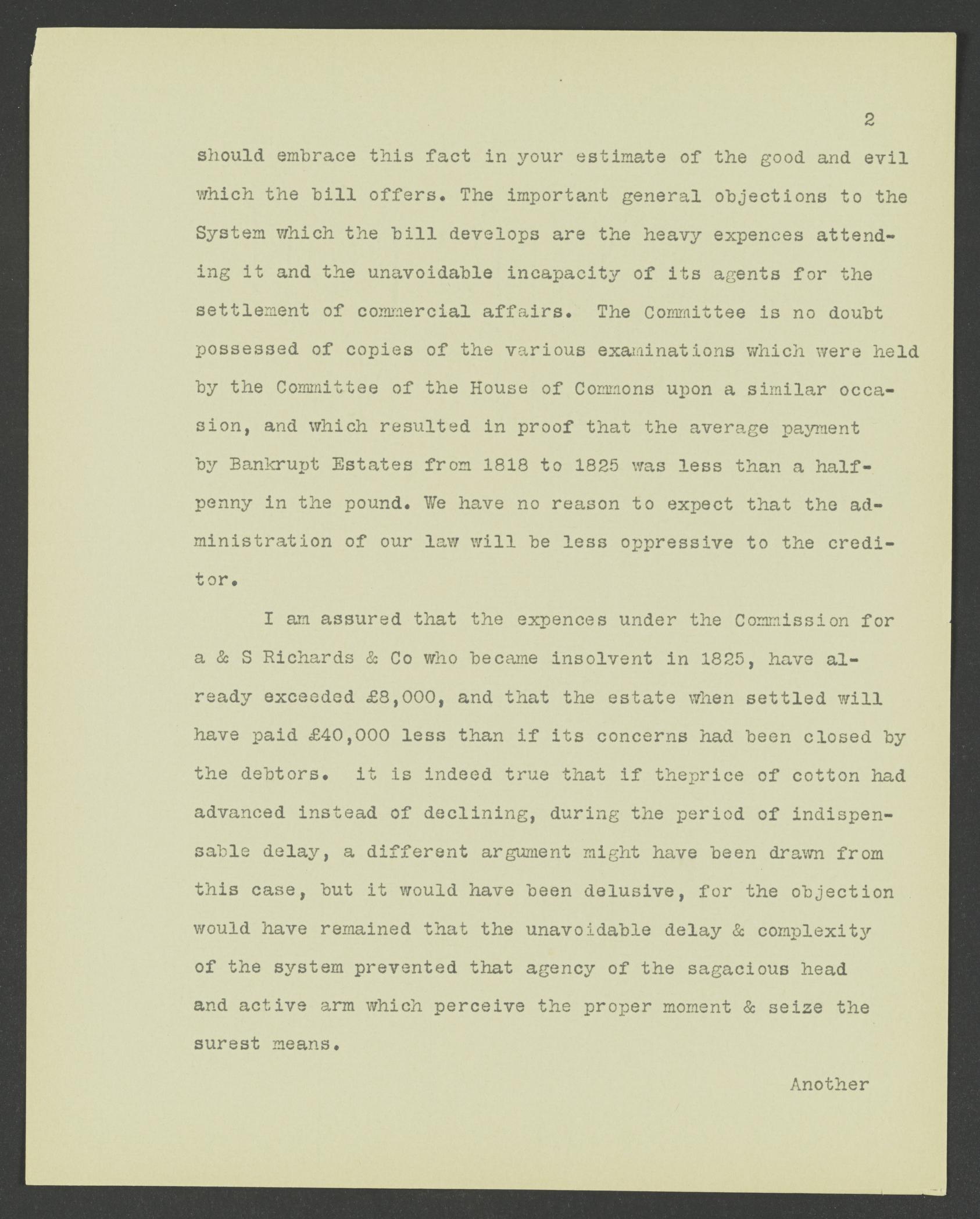 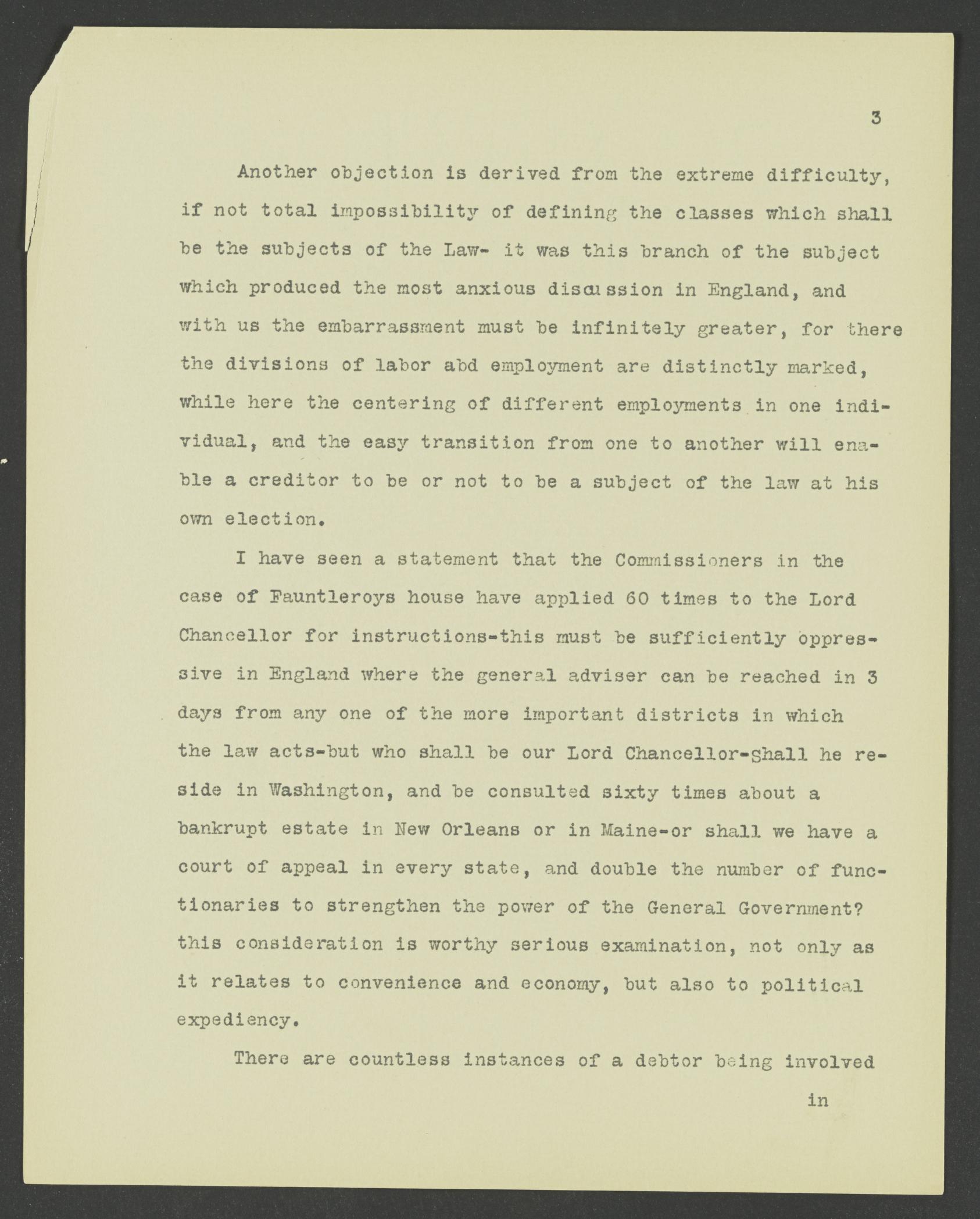 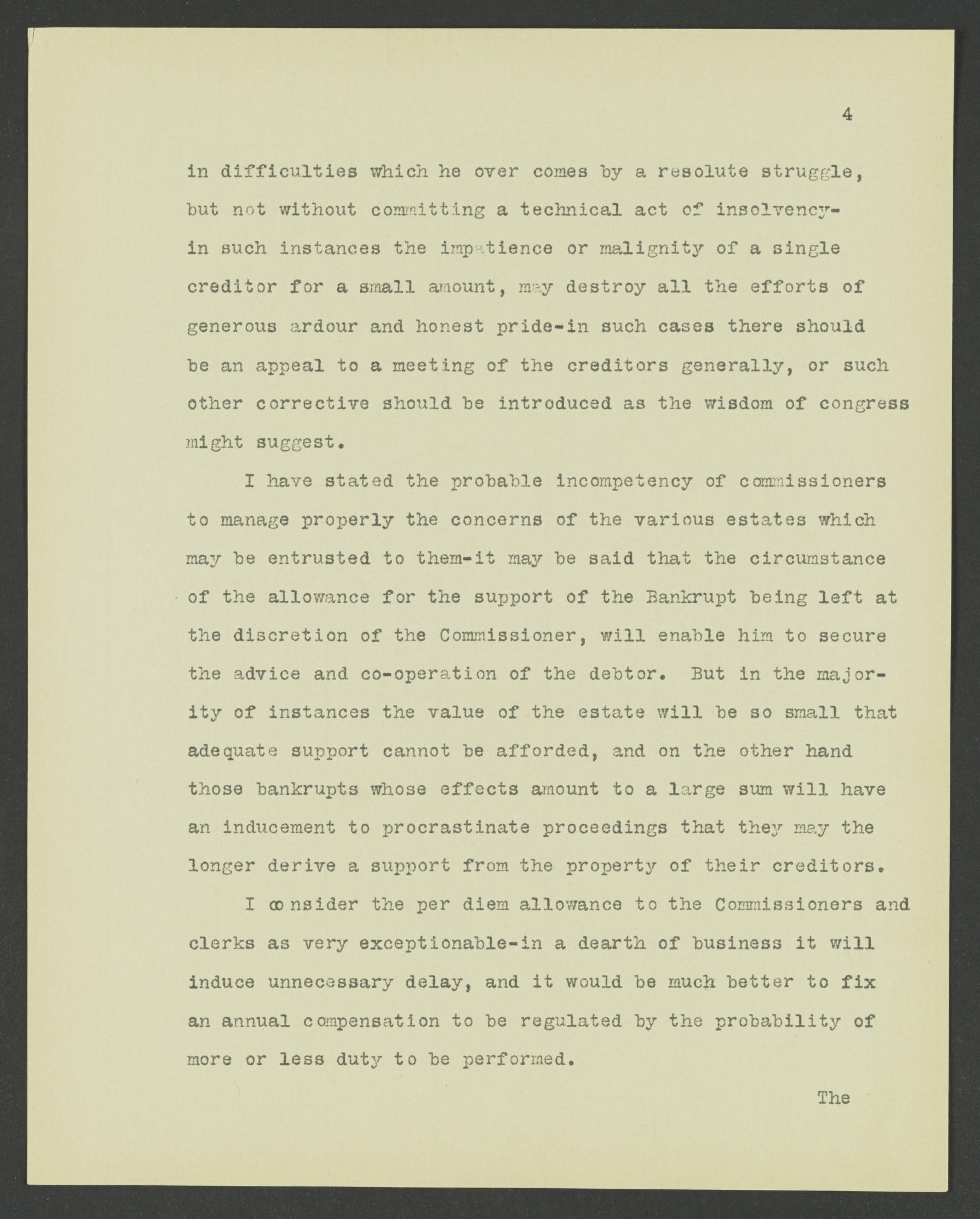 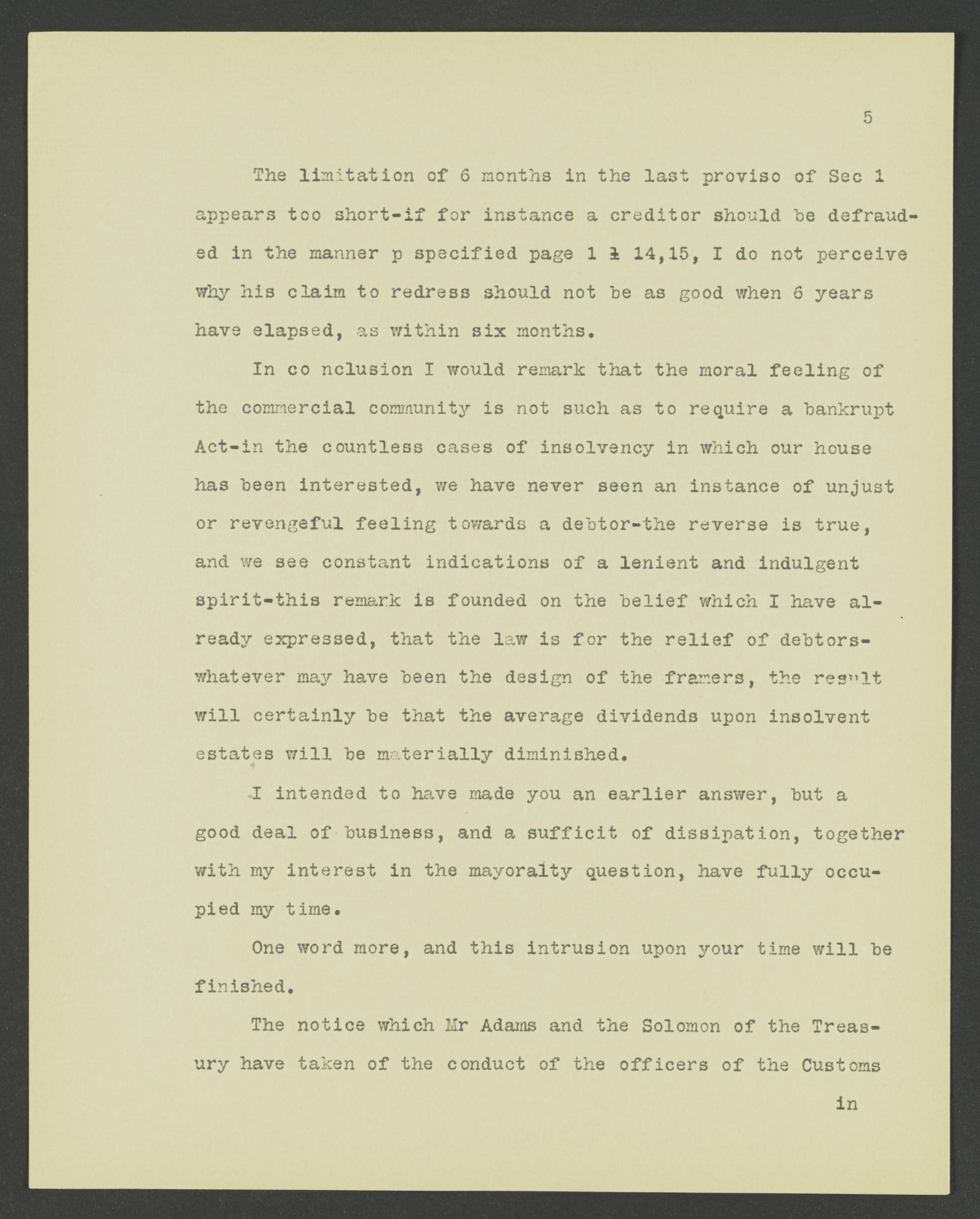 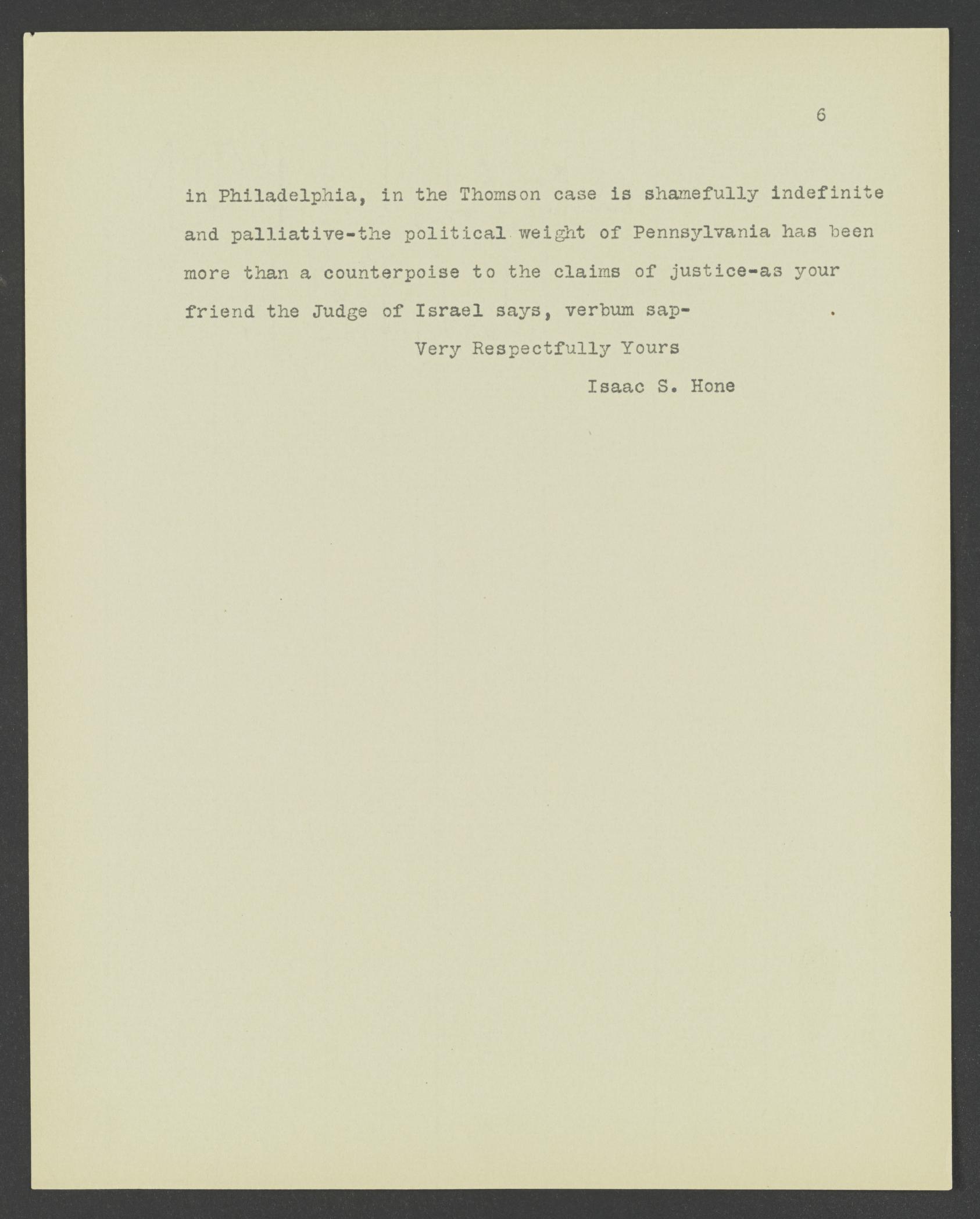