What has appeared so mysterious to others–the Tangled skein of N.Y. politics begins to have some snarls for ourselves. M. M. Noah’s attacks upon yourself and the Regency-The american republishing the observations of the Argus &c &c makes this drama some what confused. Noah’s attack upon you has an evident tendency to secure you a unanimous vote from the Republicans unless some untoward event happens to counteract it. As my letters are generally harbingers of ill news to you, I shall make this so by giving you a premonition (as Judge Spencer would say) that an untoward Event awaits you. I understand that the Daily Advertiser is to break ground for you for Senator to morrow morning, So, Sir, what you gain by Noah’s hostility you will lose by the friendship of the D. Advertiser. Upon the whole (as you say) your affairs are about where I left them when I left ^wrote^ you last. I believe I forgot to tell you in my other letter that your resolution at the Capitol (perhaps I ought to say Mr. Sanfords resolution) stuk like a chestnut burr in the throat of the honorable Secretary of State. He had it by heart & I believe laid it to heart, for he recurred to it several times in his conversation with Young & said it put by a pretty strong implication the present administration among federal administrations. As there is some liability to misapprehend this subject I hope you will take an early occasion to make the Secretary’s mind easy upon the subject.

As Croswell’s Reply to Noah seemed to give the political scales a penchant to Adams, a very sincere friend of yours flung a weight into the other side in the Character of “A Republican.”

I am a little posed on that subject about which you requested me to write a letter. As I am a little ^somewhat^ thick skulled about making distinctions I do not very clearly see how I can prefer with a strong <prefference> preference an anti caucus–amalgamation–no party Candidate to another who has held the same heretical doctrines. It appears to me that the difficulty of this subject requires a genius similar to, perhaps the same as, that which <drew> the famous resolutions passed at the capitol.

Gov Clinton has said that Gen. Jackson’s popularity is on the decline and that you would be convinced of it when you got to Washington, Is it so? What is the course of the opposition or what ought to be called the republican party? Have you a good paper? If you have please to direct it to be sent to me and I will transmit the consideration.

Let me hear from you soon.

I am sincerely Yours, 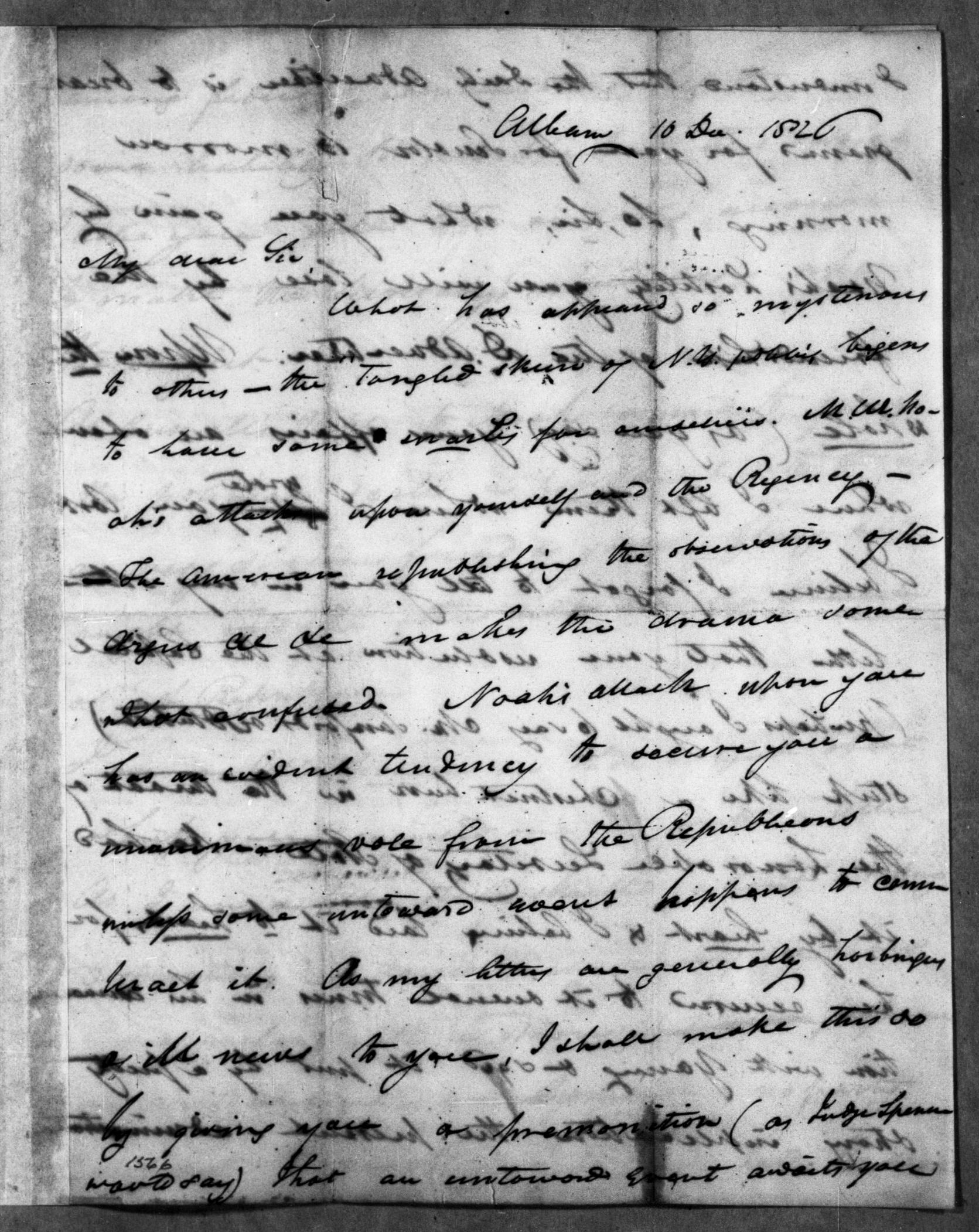 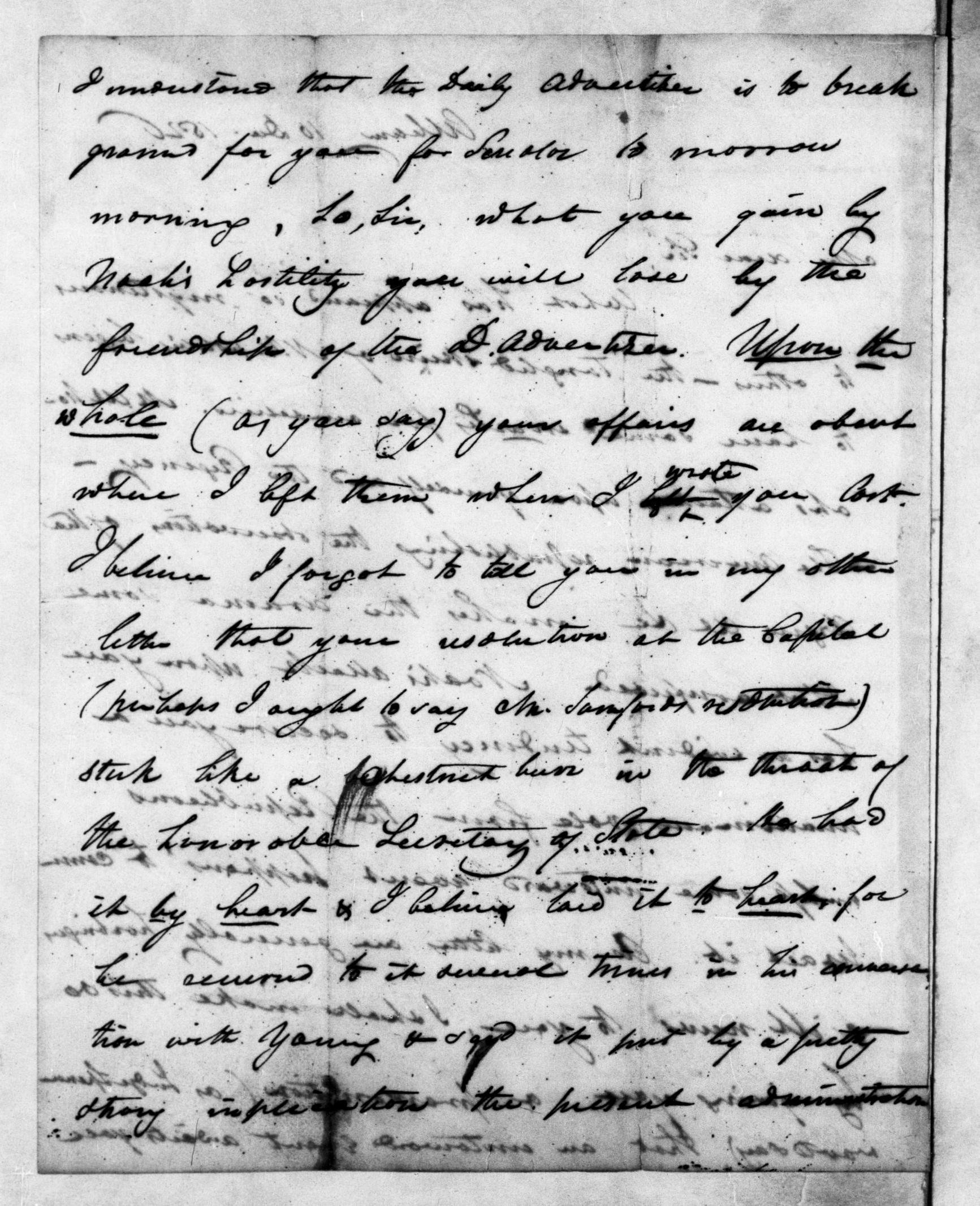 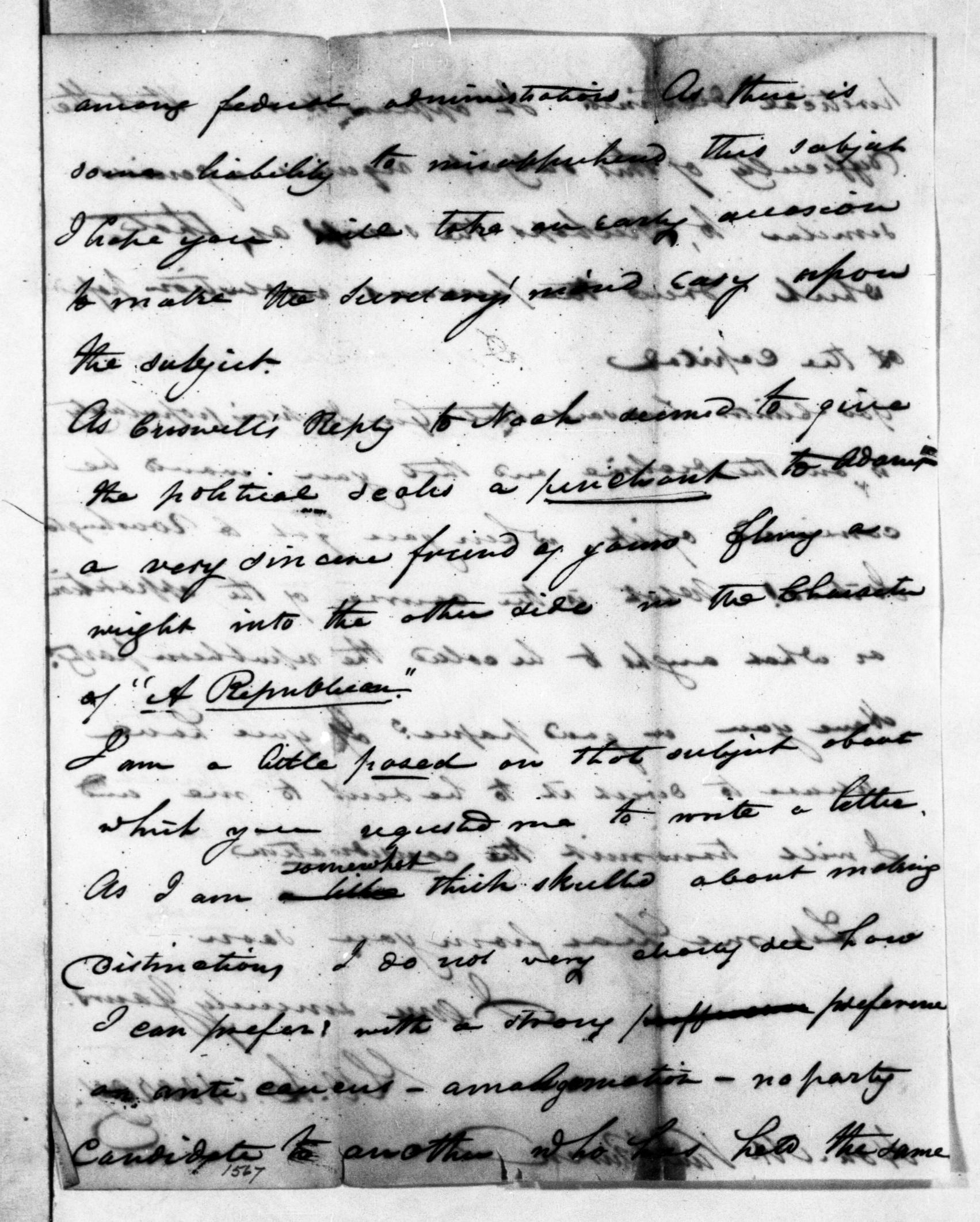 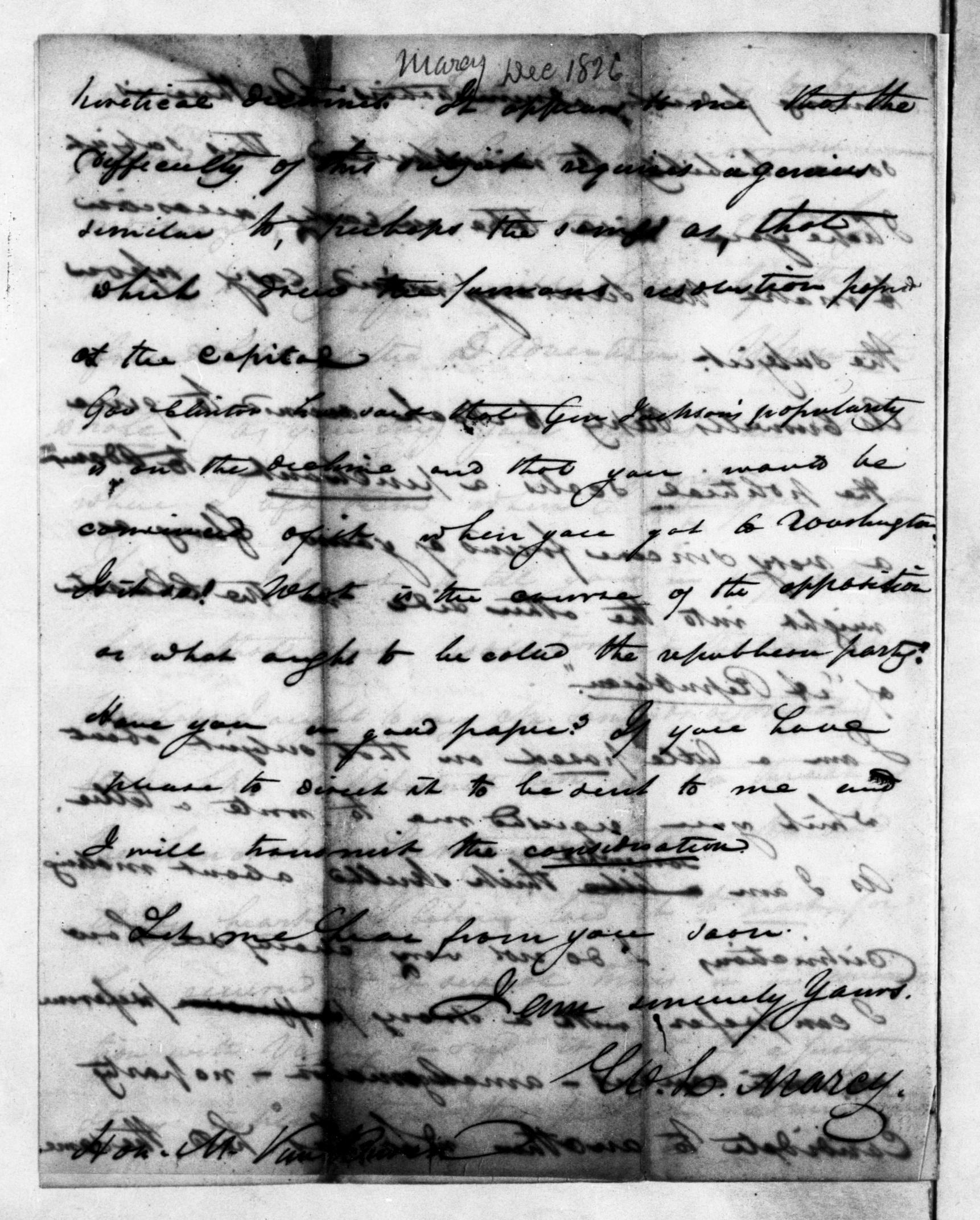 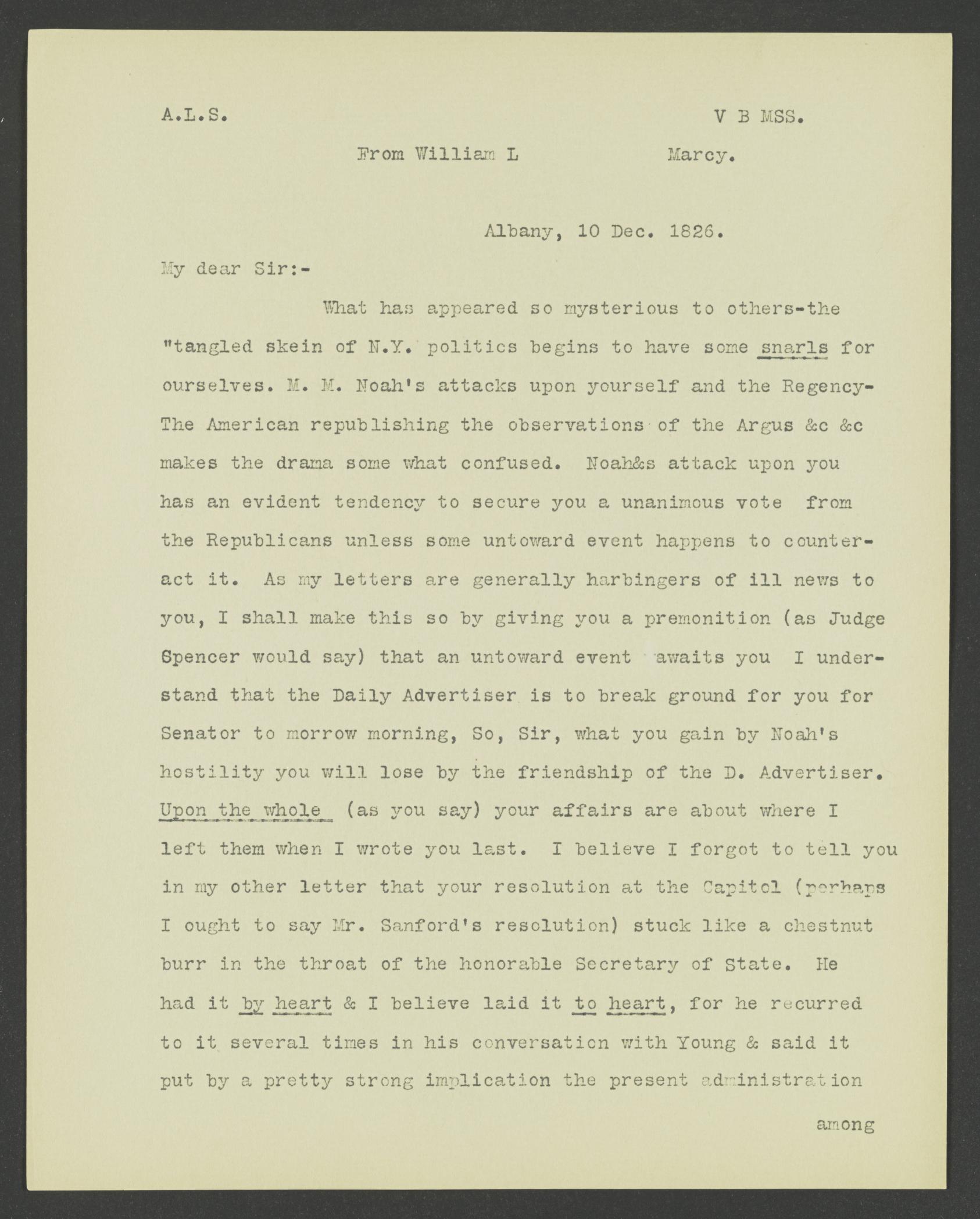 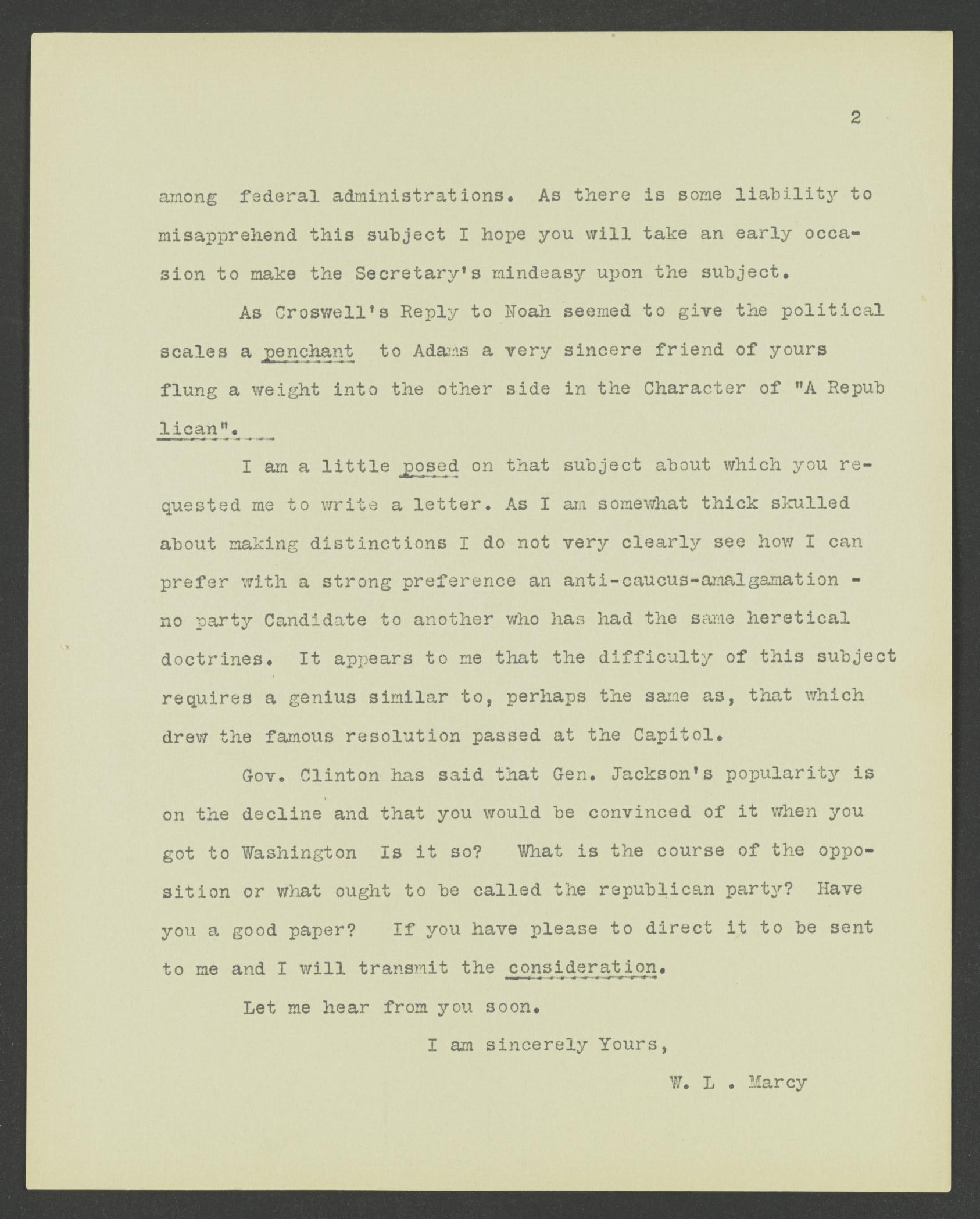