Believing it possible from some intimations given me ^It having been intimated to me^ that my name may be brought before the Herkimer Convention as a Candidate for the office of Govr. I take the liberty of troubling you with my views upon the subject, relying on your friendship to lay them before the body if in your judgment the circumstances require it. There are few men in the state more indebted to the power of the Republican Party than myself, and none more willing to acknowledge it. Such is my deep sense of obligation in this respect that I should not feel myself at liberty to decline any responsibility which could be imposed upon me by a body so fully representing the party as the ^Herkimer^ Convention will do: But in submitting myself thus unreservedly to <the> its disposition I <illegible> ^do so^ under the fullest conviction founded on my confidence in the justice ^& good sense (or wisdom)^ of its members, that they will not require what upon reflection shall ^will^ suppose to be unreasonable. It does appear to me ^I cannot but think^ that <illegible> to insist on my nomination at this time & under existing circumstances would be of that <character> & <The views> I shall proudly <illegible> but respectfully state a few of the reasons on which that opinion is founded. In the support of a principle which I believed vital to the existence of the old Republican Party of the Union & of consequence intimately connected with the welfare of the Country I was brought in a warm & active collision with the name & principle that triumphed at the last Presidential election. Of the excitement not to say animosities produced by <illegible> ^<illegible>^ <illegible> of that <illegible> in this State it cannot be necessary to speak of the to a body so enlightened & so well advised of to the ^our local^ politics of the State as the Herkimer convention. Although there is every reason to believe that the desire was ^among the republicans of this State^ produced by that struggle have to a great extent been healed still it is certainly true that <sufficient> of the angry feelings of that day day are yet left ^<to produce effects>^ to prove high[l]y [inj]urious to the election of any [ca]ndi[da]te whose good or ill portion it was to <illegible> ^have acted^ any thing like a conspicuous part ^in^ the conflict. Bu[t] This is not all. Not only are some of the consequences of the last Presidential election still present ^but^ circumstances beyond our controul are ^swiftly^ preparing the ground for a similar controversy, promising to be a warm struggle I hope not as <Vile> as the last. Although wholly <illegible> disposition ^in the^ <become habitual> <illegible> in some means habitual as to my course a <habitual indisposition to avoid> ^to me not to shrink from^ responsibility has <not> left me as much ^less^ unconnected ^more connected^ with the political excitement of the day <illegible> ^than^ a regard for my personal comfort ^only^ would suggest, & it is <illegible> more than probable that the same principle which influenced my conduct at the last Presidential election will <illegible> ^will not permit me to be an <illegible> inactive spectator <in truth> in <the next>. [mutilated] It is not reasonable to expect that all who think alike & act in concert in State politics will do the same in reference ^<illegible>^ to <those> of the Union. <On the contrary,> ^Thus^ although it is to the hoped that the admonitions of recent experiences will not have been <made> given in vain, still ^yet^ we must expect <illegible> <diversities> of opinion on that point which could not fail to effect a candidate <determined> as I would ^should^ be.

To these views, I hope to be <excused> for adding an <opinion> of a ^character^ somewhat similar. character <illegible> ^Having^ from early life taken on a little part in State politics that circumstance aided by my residence at the seat of Government has produced a very great general belief of my agency in the operation of the government far beyond the <part>. Those operations & particularly that of the appointing power ^necessarily^ produced personal disappointment for which I was to <illegible> ^a considerable^ extent held responsible. Although I have the satisfaction to believe that time & its developments have done much to dissipate private grief & unfounded jealousies still my daily intercourse with the political men of the State admonished me that the truth upon ^this^ subject is not yet <illegible> wholly ^fully^ established. Those considerate with others which I will not detain you <illegible> ^by enumerating^ satisfy my mind that the Convention by my nomination would neither do justice to the party it represents or to myself ^me by my nomination.^

I have shall not speak ^have forborne to speak^ of my personal wishes in relation to the place in question, because if I had reason to believe that the <illegible> of my name would promote the views of the Convention & those ^the party^ <illegible> friends I should find no difficult in making my own feelings subservient to the general interest. In one respect ^however^ those feelings are so directly connected with the ^other^ interests of the party that I will take the liberty of referring to them. In the station which by the favor of my political friends I at present occupy my time has for the most part been engrossed by national politics to the exclusion of those of the State. Of consequence I have grown rusty in the <illegible> A strong desire to manifest my gratitude for the confidence of my friends & my devotion to the true interests of the State & nation has induced me to direct my undivided attention to affairs of the Genl. Govemt and I have of consequence become rusty in ^less familiar with^ those of the State. The place of Senator satisfies my internal ambition. In it ^that^ I am willing to continue ^remain^, as to <illegible> ^have forego^ it without a <manner> If <illegible> ^my^ [...] or for any cause unwilling to <illegible> me again. With these explanations I <refer> myself upon the justice & liberality of the Convention, adding only my cheerful opinion (an opinion which from my knowledge of the men who will <illegible> it I have no difficulty in making) that whatever their decision upon the delicate & interesting subject committed to them shall receive my cordial & undivided support.

P.S. I wish to be distinctly understood <illegible> to wish ^as desiring that^ this letter ^shall not be^ laid before the convention <illegible> unless my friends & yours in particular think it indispensibly necessary.

The editors of the PMVB microfilm edition misdated this letter October 2. They also indicated that it may have been intended for Silas Wright Jr., a supposition that seems probable and which is reflected here. 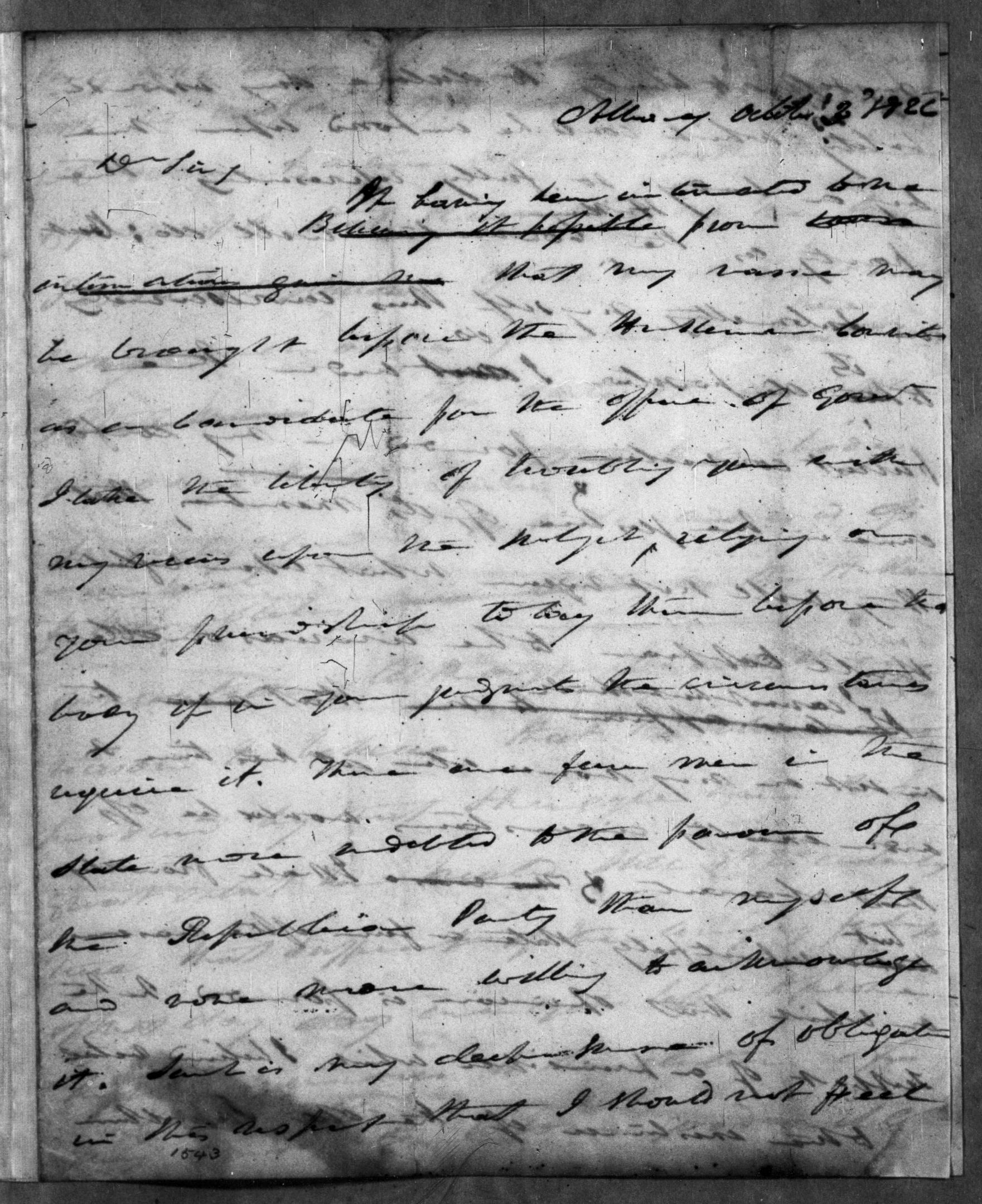 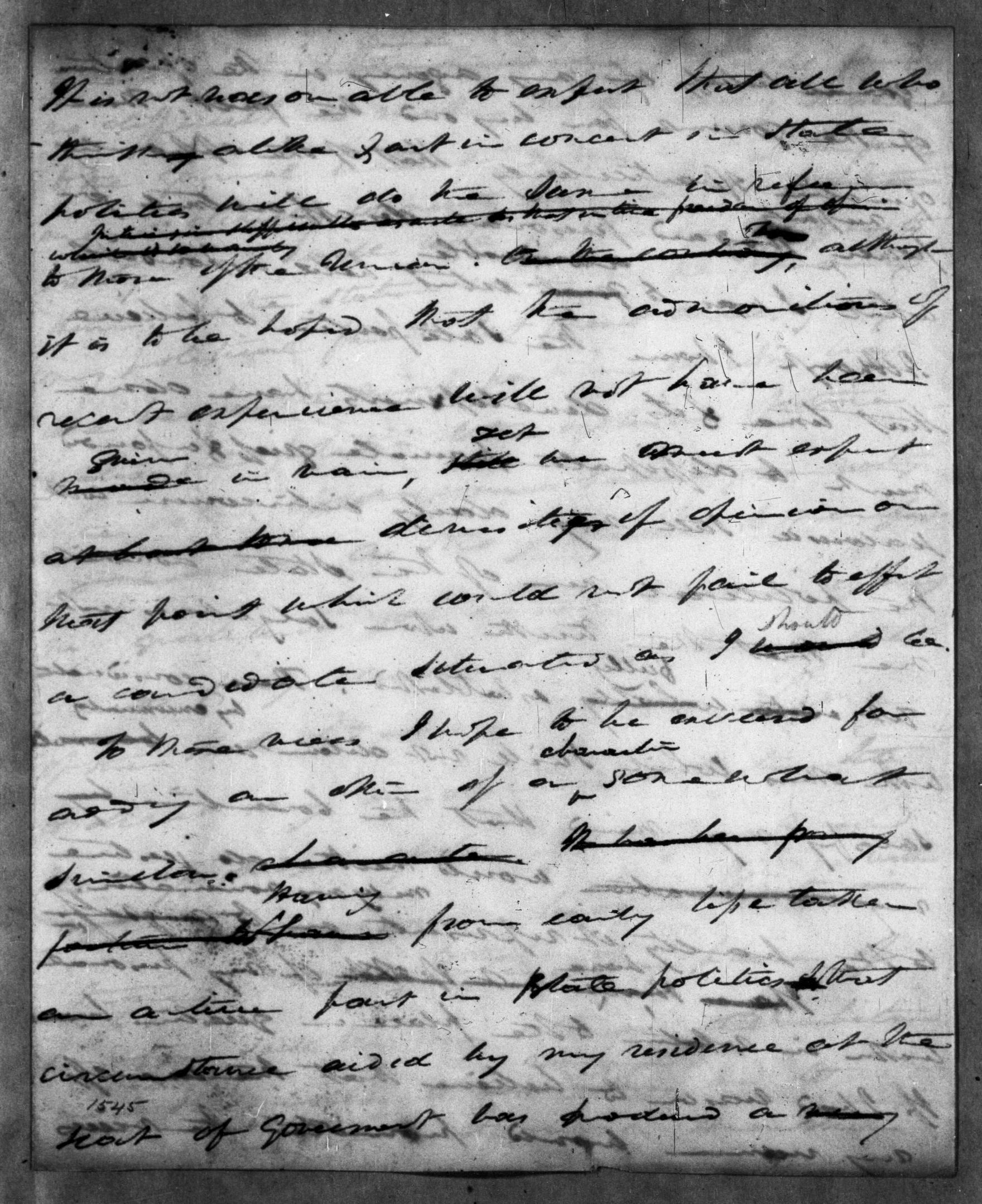 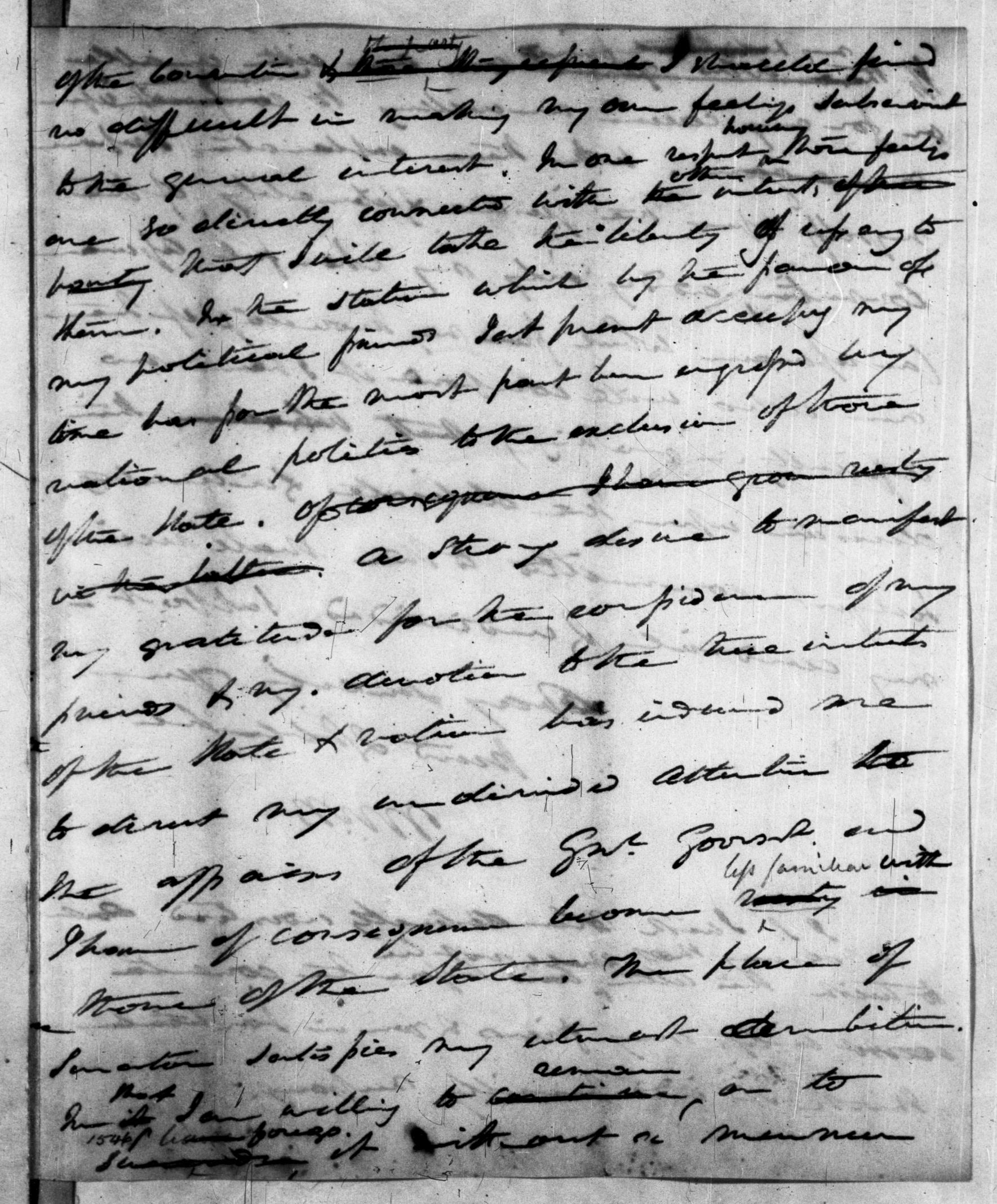