Your letter of August 30 has been longer unanswered than I could have wished; but the delay has been unavoidable. And I am sensible now that the subject of it invited more of development than successive occurrences calling off my attention have permitted. The brief view taken of it, will at least be a proof of my disposition to comply with your request, which I regard as a private one, as you will be pleased to regard the answer to it.

I should certainly feel both gratification & obligation in giving any aid in my power towards making the Constitution more appropriate to its objects, and more satisf[act]ory to the nation. But I feel also the arduousness of such a task, arising as well from the difficulty of partitioning and defining Legislative powers, as from the existing diversity of opinions concerning the proper arrangement of the power in question over internal improvements.

Give the power to the General Government as possessing the means most adequate, and the objections are 1. The danger of abuses in the application of the means to objects so distant from the eye of a government, itself so distant from the eye of the people. 2. The danger from an increase of the patronage and pecuniary transactions of the General Government, that the equilibrium between that and the state governments may not be preserved.

Leave the power exclusively with the States, and the objections are 1. That being deprived by the Constitution, and even by their local relations (as was generally experienced before the present Constitution was established) of the most convenient source of revenue the impost on commerce improvements might not be made even in cases wholly within their own limits. 2. That in cases where roads & canals ought to pass through contiguous States, the necessary co-operation might fail from a difficulty in adjusting conditions & details, from a want of interest in one of them, or possibly, from some jealousy or rivalship in one towards the other. 3. That, where roads & canals ought to pass through a number of States, particular views of a single State might prevent improvements deeply interesting to the whole nation.

This embarrassing alternative has suggested the expedient which you seem to have contemplated ^of dividing the power between the General & State governments by allotting the appropriating branch to the former & reserving jurisdiction to the latter^ The expedient has doubtless a captivating aspect. But to say nothing of the difficulty of defining such a division and maintaining it in practice, will the nation be at the expense of constructing roads & canals without such a jurisdiction over them as will ensure their constant subserviency to national purposes Will not the utility and popularity of these improvements lead to a constructive assumption of the jurisdiction by Congress, with the same sanction of their constituents, as we see given to the exercise of the appropriating power already stre[tch]ing itself beyond the appropriating limit.

It seems indeed to be understood, that the policy and advantage of roads & canals have taken such extensive & permanent hold of the public will, that the constructive [auth]ority of Congress to make them will not be relinquished, either by that or the Constituent body. It becomes a serious question therefore whether the better course be not to obviate the unconstitutional precedent by an amendatory article expressly granting the power. Should it be found, as is very possible, that no effective system can be agreed on by Congress, the amendment will be a recorded precedent against constructive enlargements of power; and, in the contrary event, the exercise of the power will no longer be a precedent in favor of them.

In all these cases, it need not be remarked I am sure, that it is necessary to keep in view the distinction between a [u]surpation of power by Congress against the will and an assumption of power with the approbation of their Constituents. When the former occurs as in the enactment of the alien & sedition laws, the appeal to their Constituents sets everything to rights. In the latter case, the appeal can only be made to argument & conciliation with an acquiescence when not an extreme case in an unsuccessful result.

If it be thought best to make a constitutional grant of the entire power, either as proper in itself, or made so by the moral certainty, that it will be constructively assumed with the sanction of the national will, and operate as an injurious precedent, the amendment cannot say less than that “Congress may make roads & canals with such jurisdiction as the cases may require.”

But whilst the terms “common defense & general welfare” remain in the Constitution unguarded against the construction which has been contended for, a fund of power inexhaustible, & wholly subversive of the equilibrium between the General and the State Governments is within the reach of the former. Why then not precede all other amendments by one, expunging the phrase, which is not required for any harmless meaning: or making it harmless, by annexing to it, the terms “in the cases authorized by this Constitution.”

With this sketch of ideas which I am aware may not coincide altogether with yours, I tender <renewed> assurances of my esteem & friendly wishes. 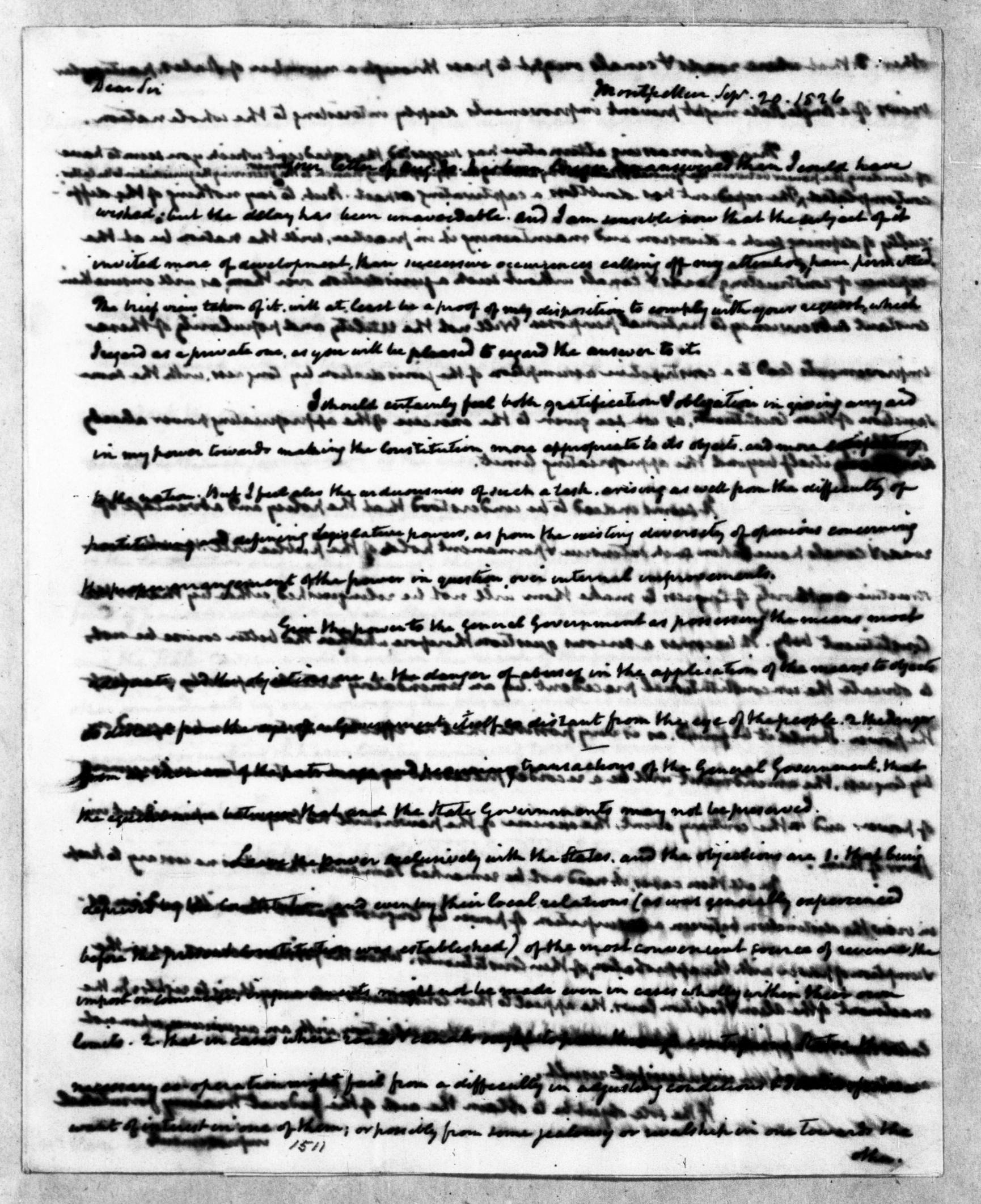 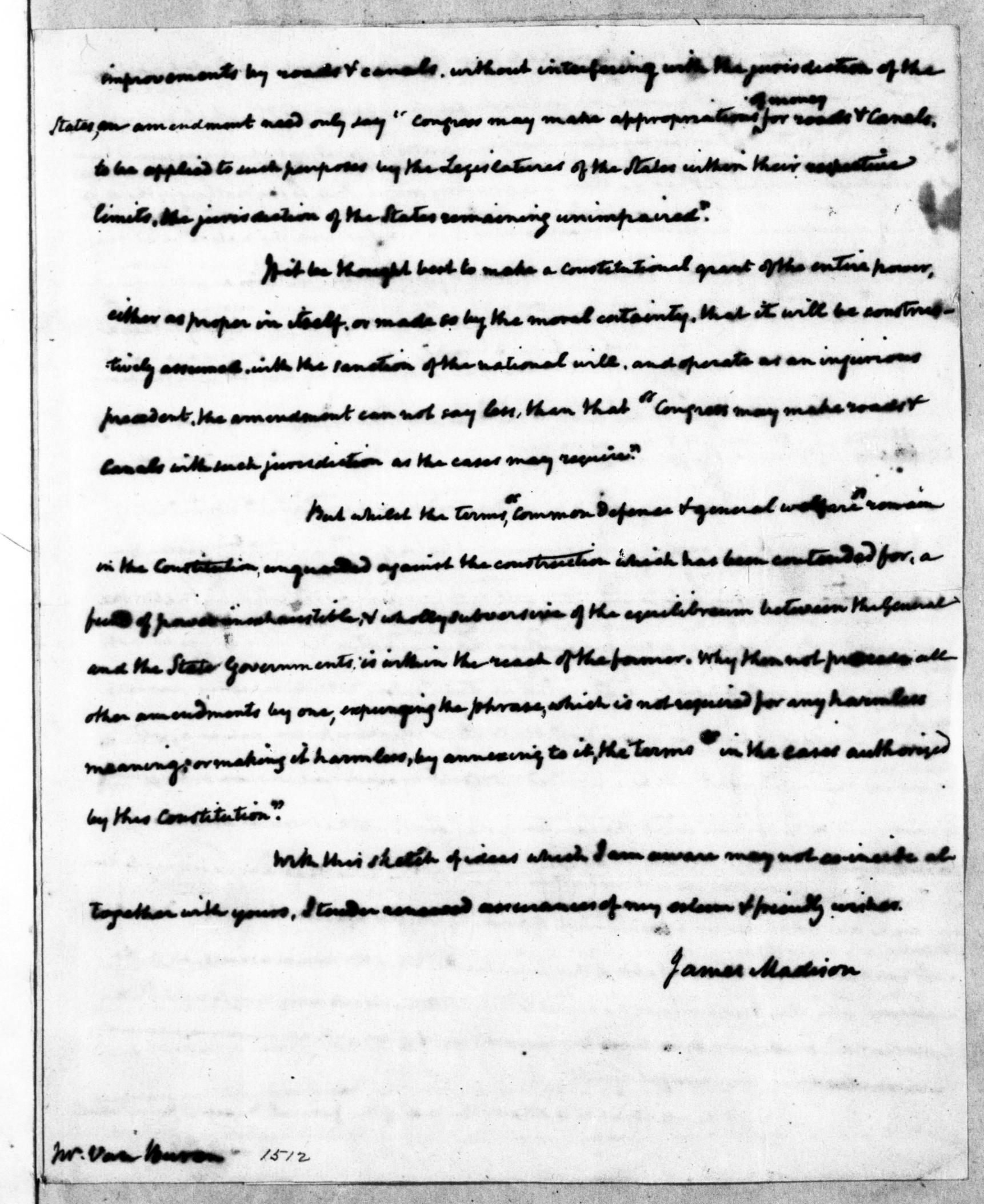 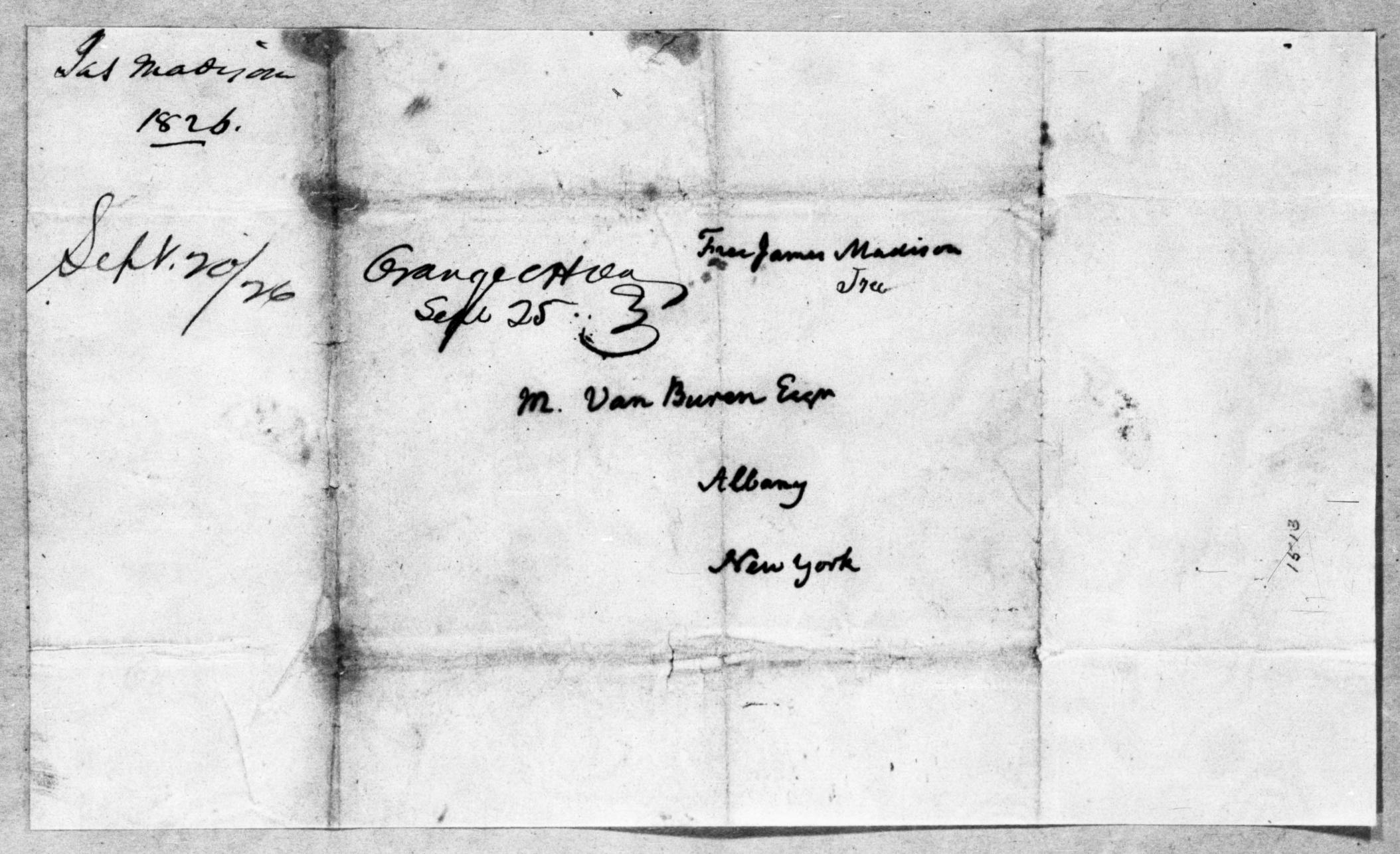 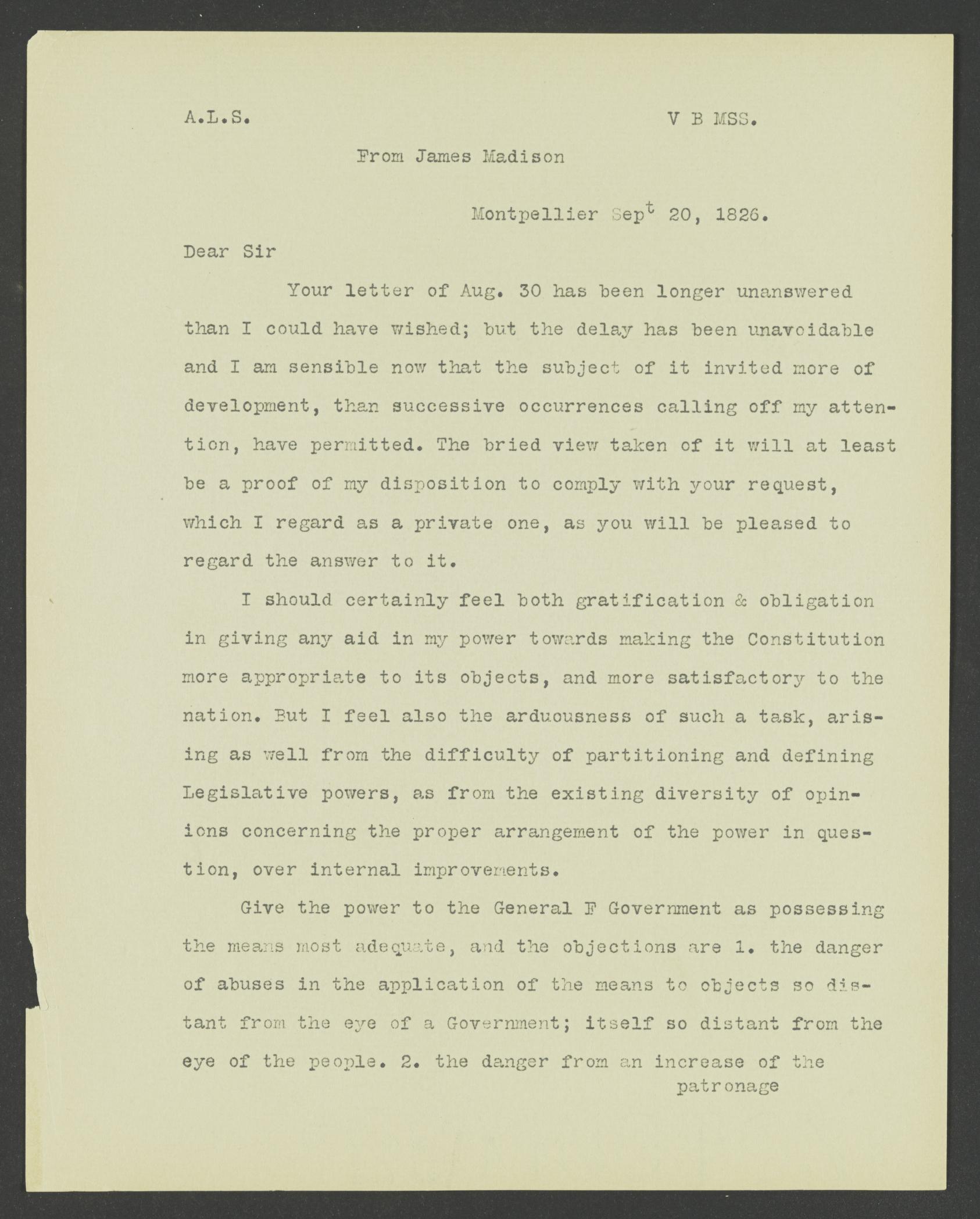 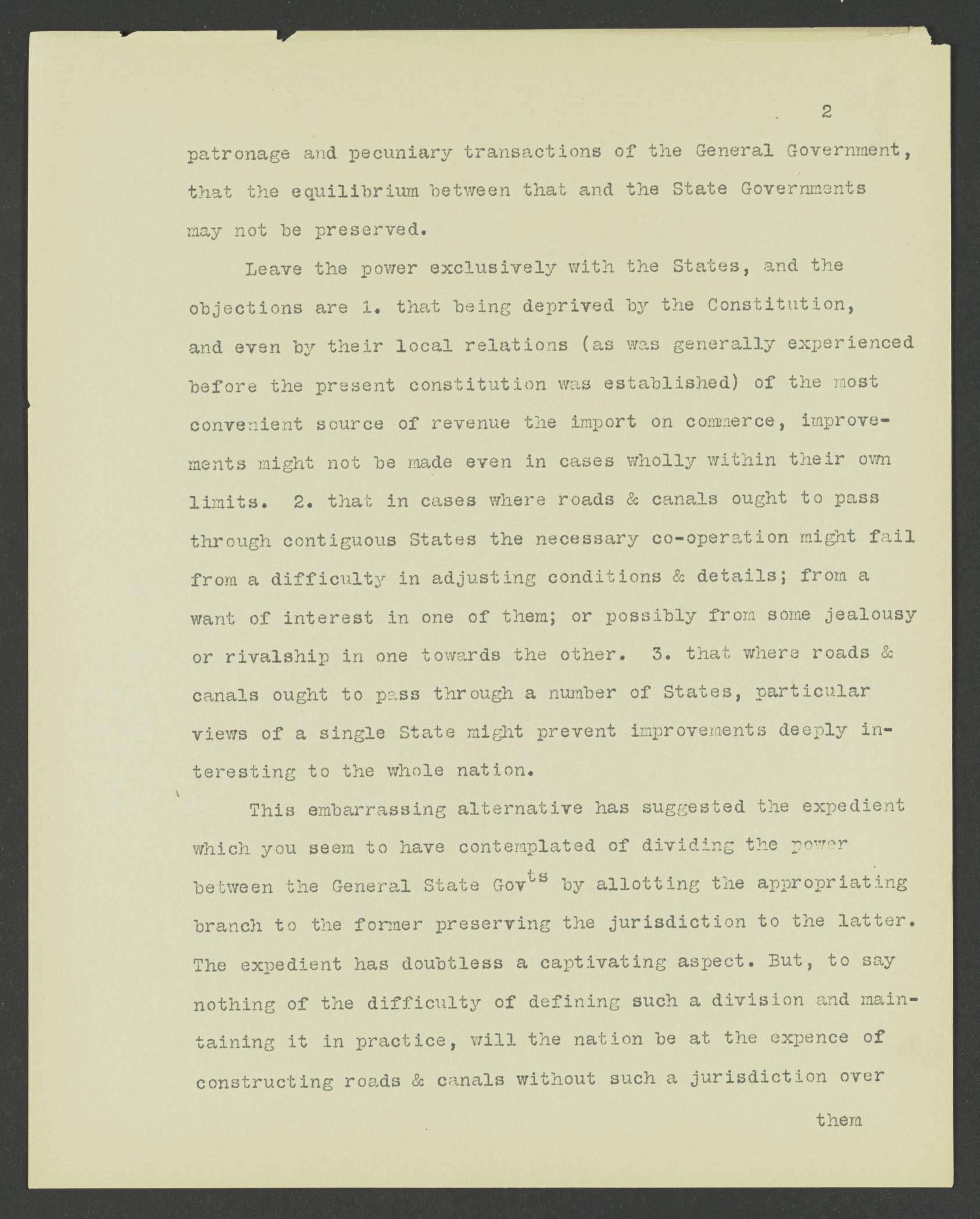 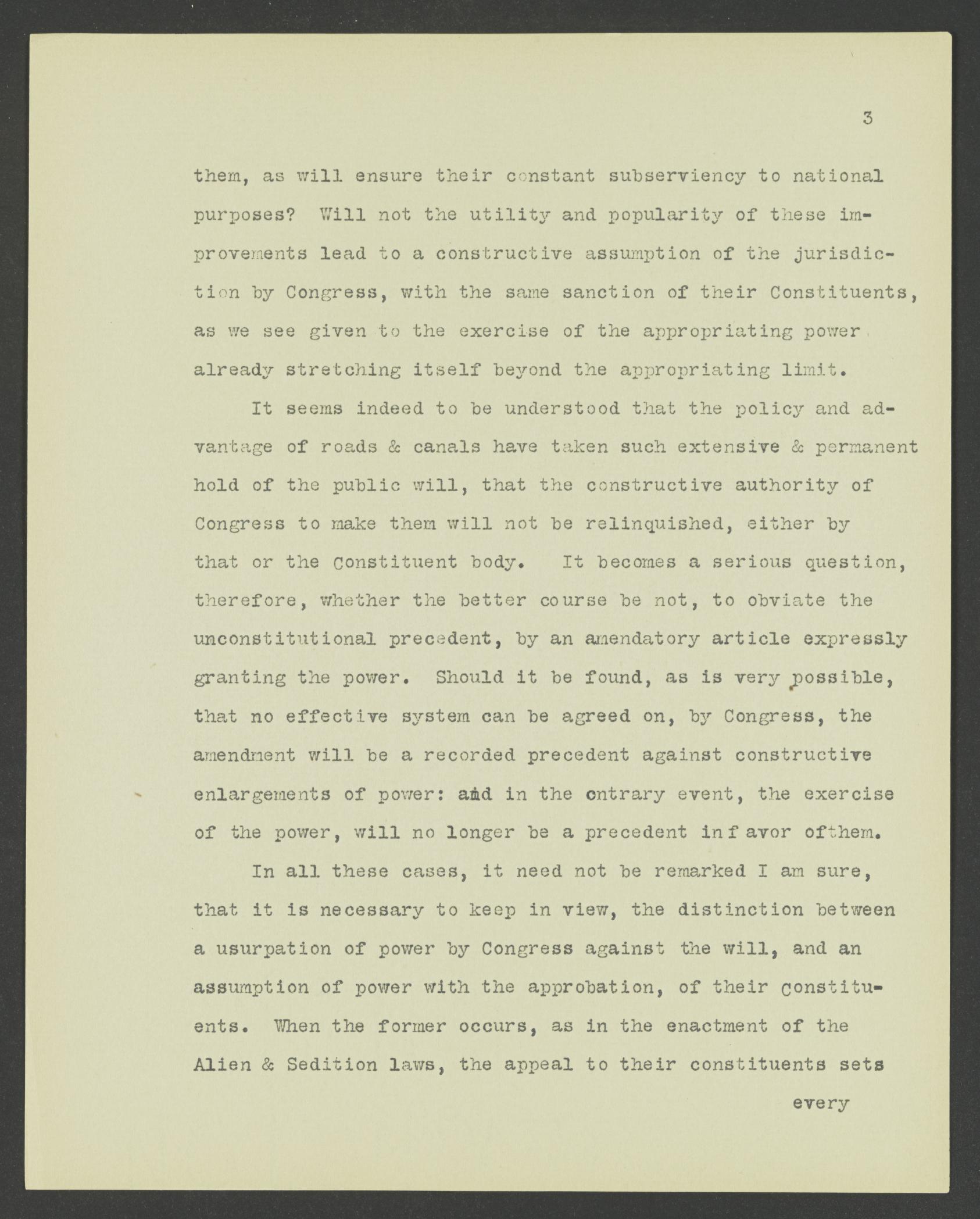 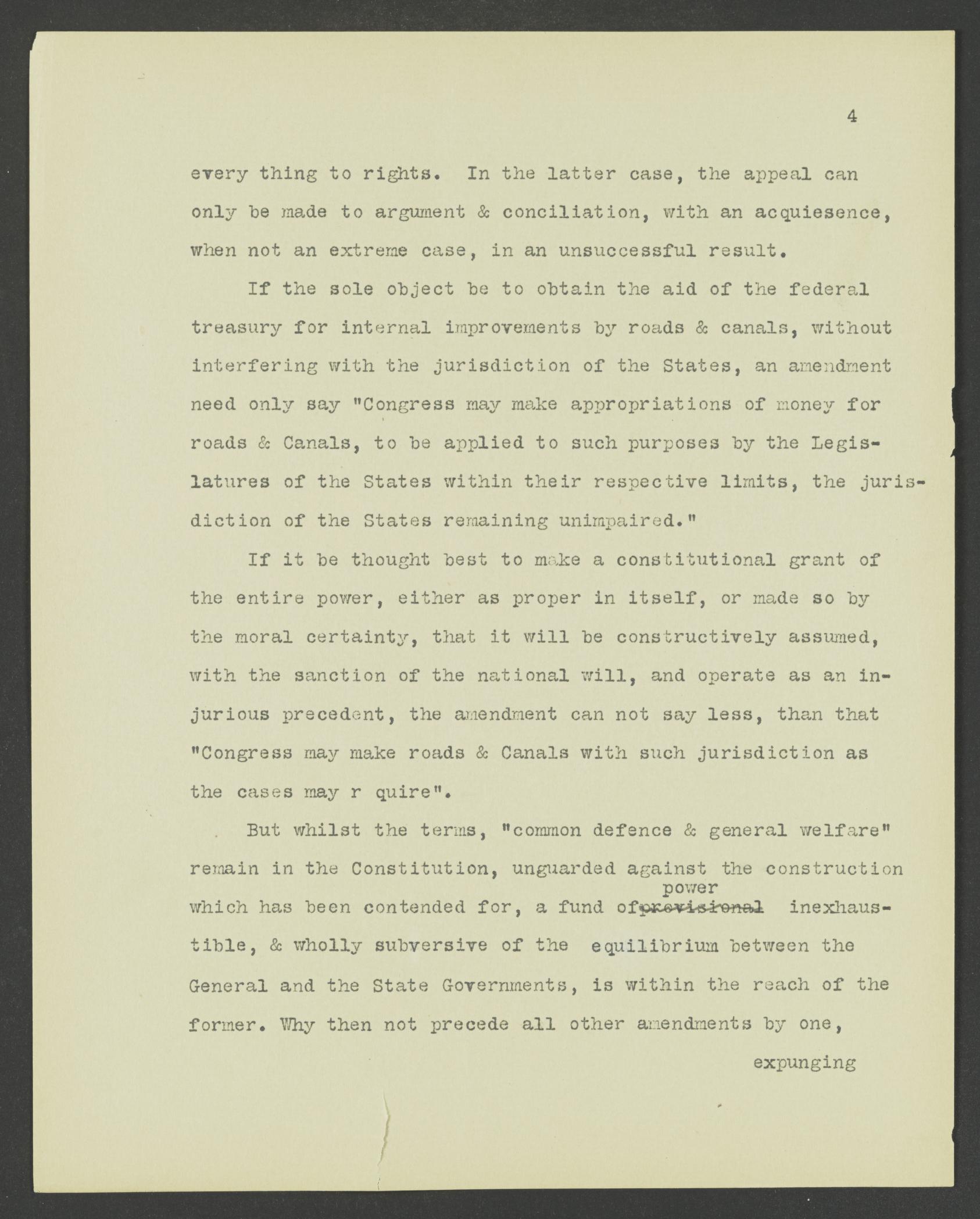