1. Removal of grounds of collision.

2d. Injurious effect upon our legislation.

3d. The tendency to the subversion of the constitution.

3. Difficulties in arriving at result—causes.

4. The different measures proposed—changes—still all ending in ^gratuitous^ cession to the states

5. The importance of considering the ground taken by the Senators from Indiana & Alabama–viz want of title is us.

6th. State the pretensions on which this claim in behalf of the States is found viz the promised admission of the new states with the same rights of sovereignty <illegible> & independence & the incompatibility of [. . . ] of the <illegible> the Federal Govmt.

1 To the reservation of the ownership of the soil consistent with the original & <continued> intentions & contracts of all the parties viz the ^old^ States, The Federal Govt. The Territories, & the new States.

2d. If it is so, is there any thing in the Federal constitution inconsistent with the admission of the new states upon the terms adopted.

1. Resolution of 1780-show that the design to <illegible> the lands to the Federal Govmt distinctly <illegible>.

2 Act of Congress of 1788 setting forth the terms upon which the cessions would be received.

5. Its ratification by Virginia.

6. The then population of the N. West Territory 35.000-provided for in the cession.

7. The subsequent settlement of the Country under these agreements, & that ordinance

8. The adoption of the ordinance in the constitution & the admission of the new states upon the presented terms.

2d. Not true that ownership of the soil of itself inconsistent with Sovernty–<illegible> in all the States.

3d. Distinction between political sovergty and sovereigty over the soil.

4th. <illegible> apprehend <from> purchases of State differs–between what we had & what is to be acquired-<illegible>-land that the U. States acquire in a state subject to state law except so far as restricted by constitution, &

5. Constitution–is there any thing in it to permit admission upon the Terms stated difficulties suggested by <Mr> <Ewing>

1st. That the State has no authority by the constitution to make such a contract it not being a treaty.

2d. That the States are prohibited because they are prevented from entering into any treaty alliance or confederation & this is a treaty

About the constitutionality and legality of the <nomination> this is therefore no reasonable doubt.

Is it not great-

The sessions & its ^their^ objects—the <Release> by other States—it was in contemplation during the war & led to <illegible> & sacrafice by the State. Purchase of Louisiana & Florida--cession by Gorgia—All at the <illegible> of the old states.

Surrender of power on this floor—a liberalty for the like of which you will look in vain in the history of the world.

After all that is there cause for complaint if we do not surrender the whole estate.

But the doctrine contended for would if established be destructive of the most invaluable rights of the United States themselves—importance of the free navigation of the Mississippi—security taken from it in the ordinance of 1787. This situation of the <country>—foresight—present condition of <illegible> atlantic & interior States—if this principle is established the Western states hold this invaluable right during the pleasure of Louisiana.

The idea therefore should be abandoned & no new states will be admitted. The Gentlemen should reconsider—the public mind should be disabused.

1 Necessity of & or explanation—<illegible> observations

2d Am fully in ^the^ sentiment contained in Mr Tazewells resolution

3d. Reasons-suppression of state jealousies—injurious effect upon our Legislation—tendency to lead to a subversion of the Constitution

4th. Although clear in the desired result by no means so as to the mode of accomplishing it—this not surprising—case of extreme magnitude & intricacy

5th. A consideration of the different grounds taken by the friends of the Bill.

I. A cession as provided by the amendment of the Senator from Indiana & supported by him & <illegible> from Alabama—although withdrawn still a final session is contemplated by the Bill—the point belongs to the case & ought not for the peace & prosperity of the Country to go unnoticed.

1. Explain the grounds upon which it is placed viz that the resolution of 1780 provided admission upon with the same rights of sovereignty reason ^freedom^ & independence—act of old Congress Sept 1783 declaring more fully the terms upon which the session would be received contrary the same promises the cession ^March 1784^ upon the same condition of admission with the same rights of sovereignty freedom & independence—and the ordinance of 1787 which provide that the new states shall be admitted on an equal footing with the original states in all respects whatsoever—That the ownership of the <fee> by the U. States is <illegible> incompatible with Sovereignty & therefore the stipulation to that effect in their Constitutions is void & the land belongs to the States.

The considerations naturally growing out of this are

1st. The Bona fide intentions of the ceding states, the old states the people of the Territories & the new States in this respect, is the stipulation in their constitutions reserving to the U. S. the primary disposition of the soil consistent with their original intention

2d. Was there in the Constitution of the U. States that prohibited their admission subject to that modification of their sovereignty.

1. Resolution of 1780–lands to be disposed of for the common benefit of the U. States, & to be granted or settled at such time & under such regulations as nine out of the 13 states should thereafter agree

2d. Act of ^Congress^ 1783 stating in advance the Terms upon which the cession should be rcd. shall be considered as a common fund for the use & benefit of such of the U. States as have become or shall become members of the confederation or federal alliance Virginia inclusive

3d. Virginia out of cession of March 1784 contains the same provision as to the trusts.

4th. The ordinance of Congress of July 1787 The Legislature of those districts or new states shall never interfere with the primary disposal of the soil of the U. States in Congress assembled & promises that the constitutions should be according to this ordinance—60,000 whole

5. Ratification of this article by the state of Virginia.

6th. Settlement of the Country under the ordinance

7. Formation of the state constitutions adopting the Ordinance as their basis required by it as to Ohio Indiana & Illinois & by the Cession of Gargia as to Alabama & Mississippi & by Congress as to Louisiana &c

Strong reasons required—what are they

1st. That the ownership of the soil incompatible with sovereignty—not true—<illegible> Lands now held by the U. States—in the old States.

3d. But is there any thing in the Constitution to ^prevent^ admittance upon the condition stated.

4th. Constitution adopted with a knowledge of all these facts, & with an understanding as to what was meant by the terms of equal sovereignty freedom & independence.

5. Difference between the property the U. States then held & what she might herself acquire in the States. The notion therefore most <illegible> most dangerous & should be discontinued by any <illegible> to the states.*

1st. Mr <illegible>—dissolution of the Union—character & courage of such observations.

2d Bentons—no value—land to cede must cede or our laws will not & cannot be <illegible>.

Cannot acquiesce in the provision of this Bill.

2d Value & <illegible> of the property

4. Willing to reduce the price of the public lands to one dollar—all <illegible> had <illegible> production—lands cannot settle advantageously that are obtained <illegible>

5. Gnl Hamilton plan—what would have been its probable results.

6. There will be no giving back the faith of Congress will be pledged for the cession if not an acre is sold.

Some other mode must be adopted

2d. Willing as one to <release> all the lands to the states upon the payment of the public debt.

2d. Wait until they are able, Ohio could do it now.

4. In that way the matter would be so conducted as to satisfy our constituents—<commissions> would be sent out &

5. If Delay takes place the States would have no right to complain, it would be to effect a great object never dreamt of when they <have> <addressed>

32 millions & that nearly absorbed in expences

Is it in however volume to <illegible> <there> things forever

1. Mr. <illegible>—dissolution of the Union, uniform consequence of such discussion.

3d. It would be <sustaining> to the heart of the patriot, of the real friend of this Union, to think that after the course which has been pursued towards those States there should be found any other feeling than those of love for the Union.

Cannot consent to the promises of this Bill, Benton

1. Character of those we represent

2 Value & <illegible> of the property & calculation made upon it

3. Unceremonious manner in which we had disposed of it. Would not use our own property so

4. Agree with Mr <Macon> to reduce the price to $1—Settlers who do not pay not the best—our experience

6. If we pass this Bill we pass the Rubicon—no retreat—cession must follow—purchases cannot be made in next five years to prevent it.

Some other plan must be fallen upon.

1. Willing to cede to the states themselves <illegible> terms

2 Extent of the <illegible>

4. The only difficulty would be about the payment.

7. Willing to vote for any incipient steps leading to that end.

8. With it our constituents would be satisfied out—Delay to be expected no cause of conflict

(Lower left corner of page 8): objection that State cannot enter into treaty Ditto that U.S. have no right to make the compact because no treaty 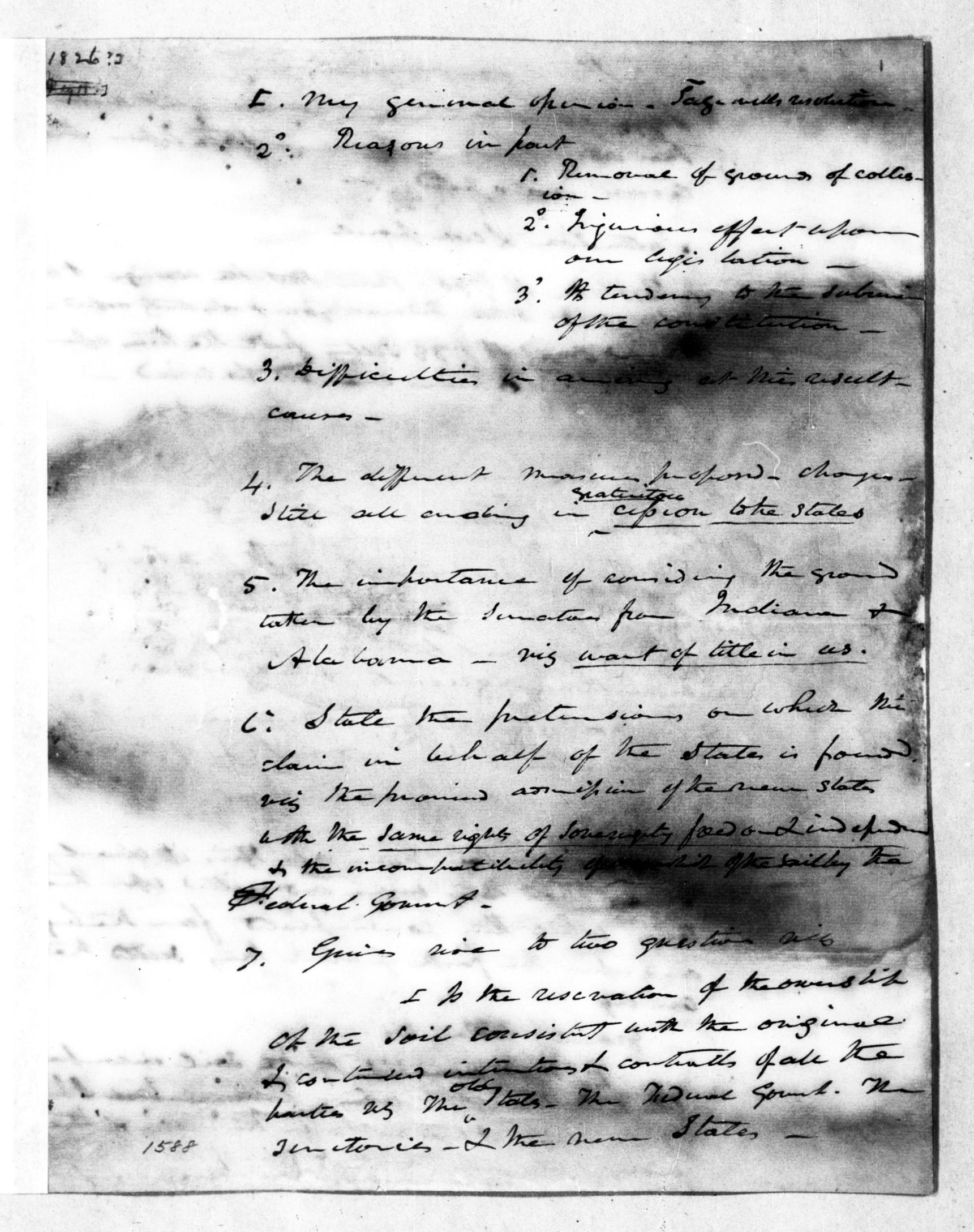 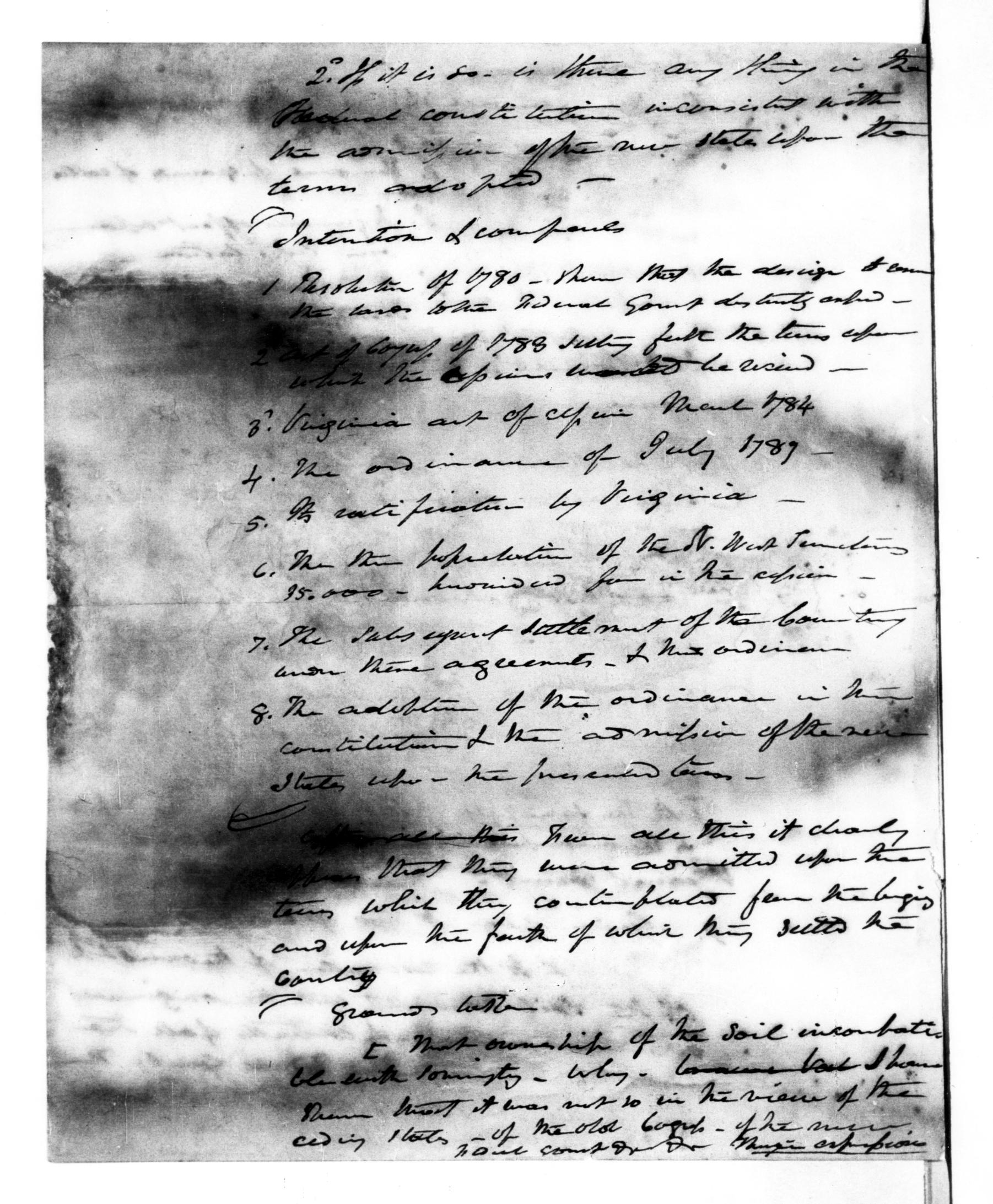 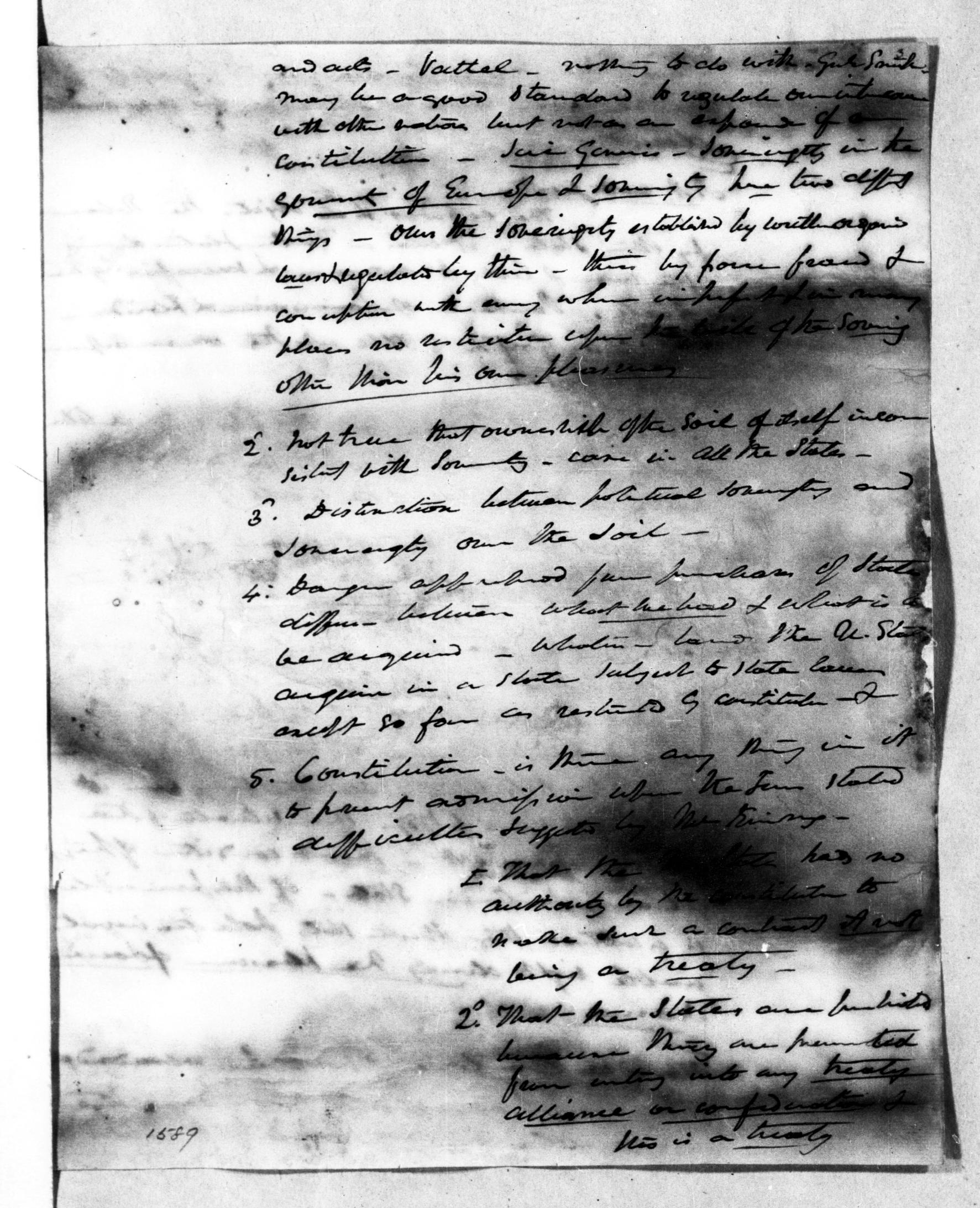 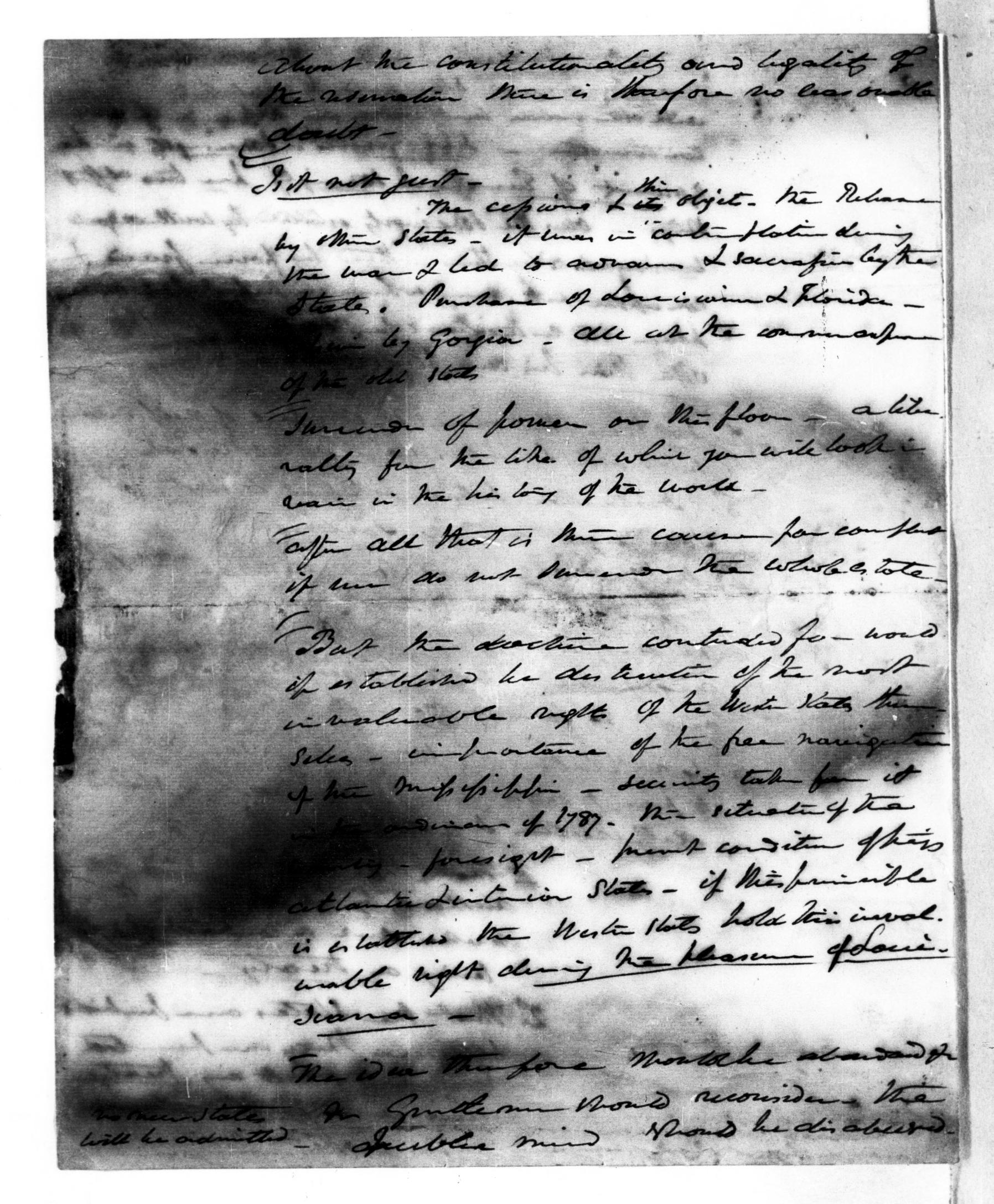 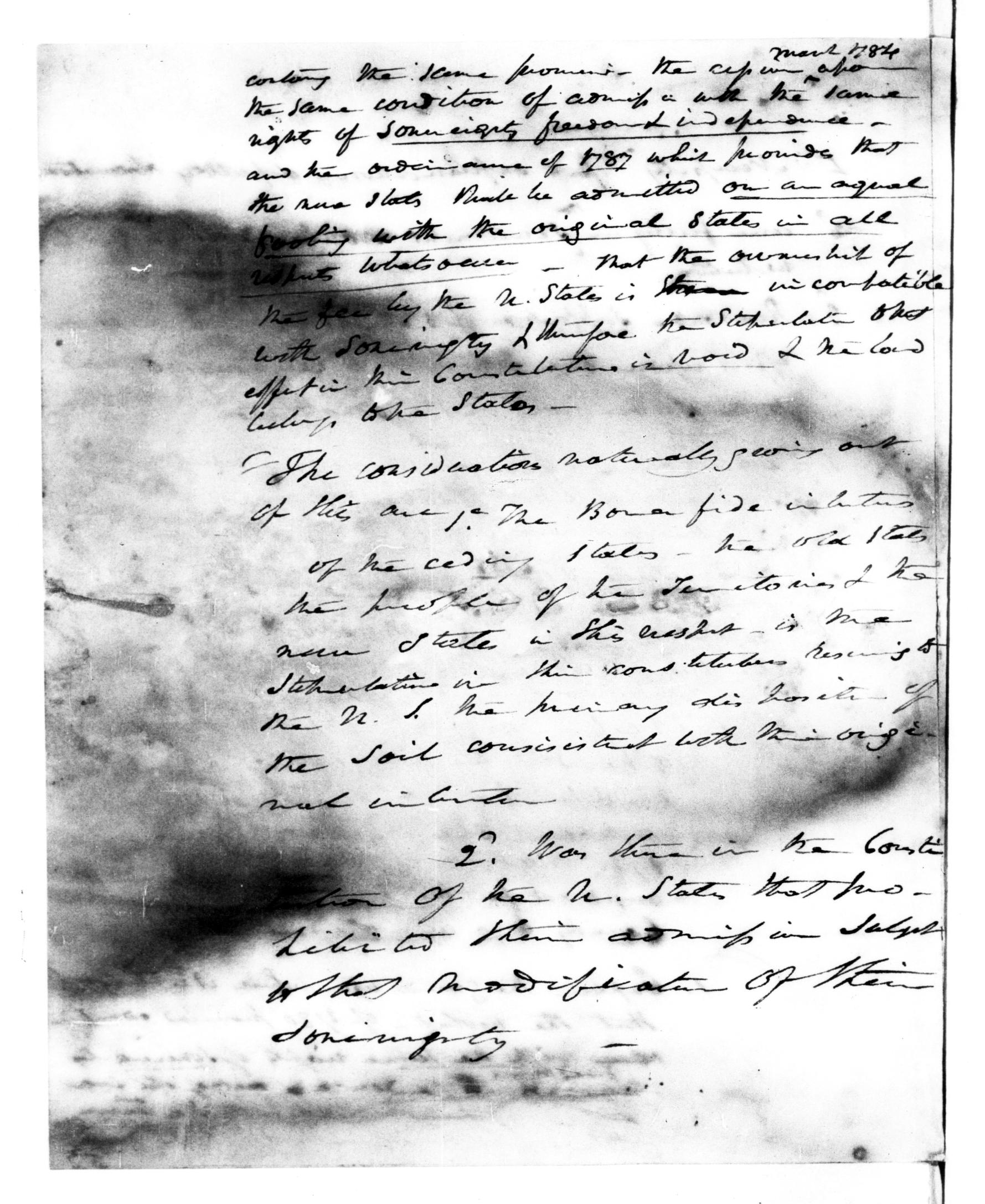 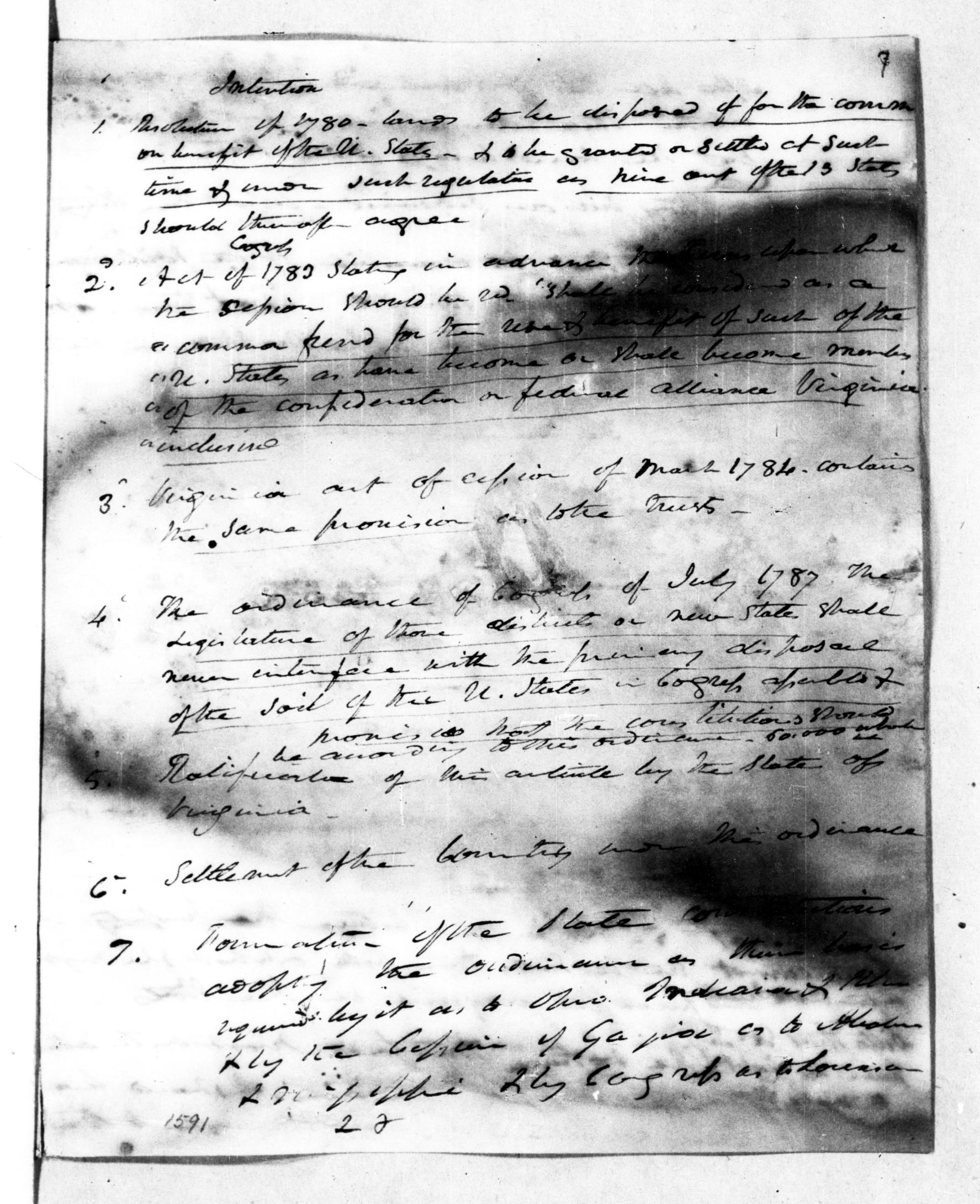 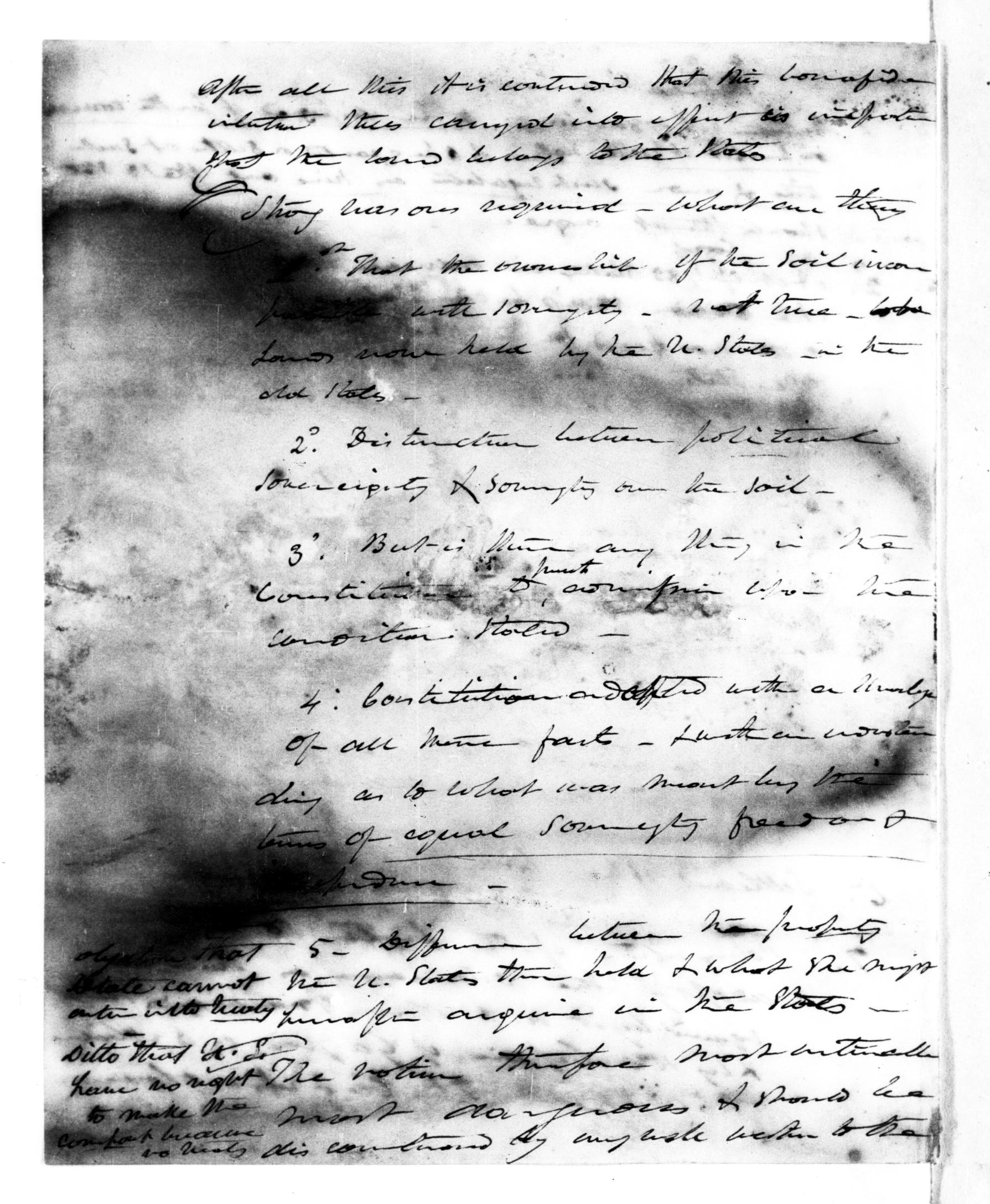 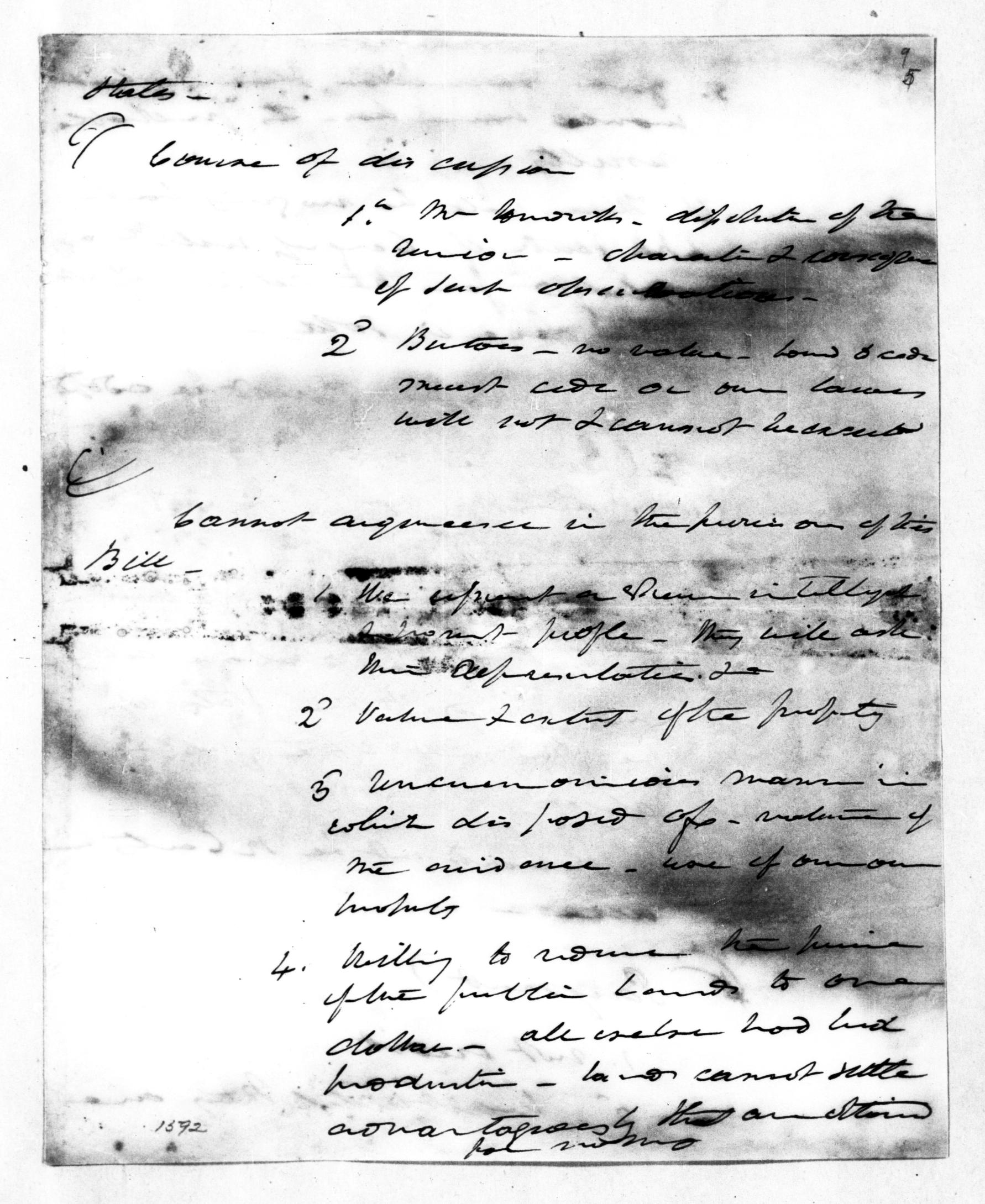 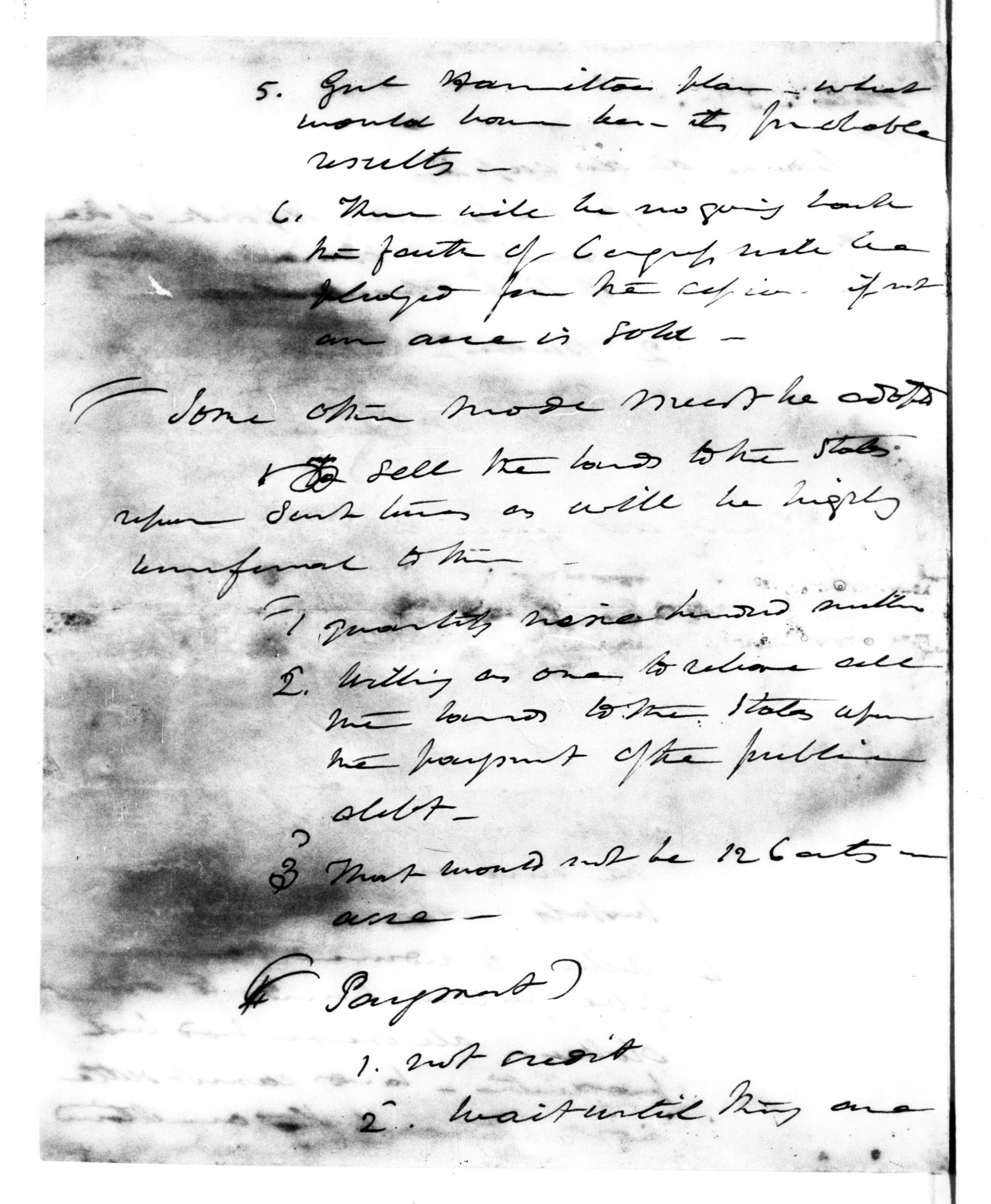 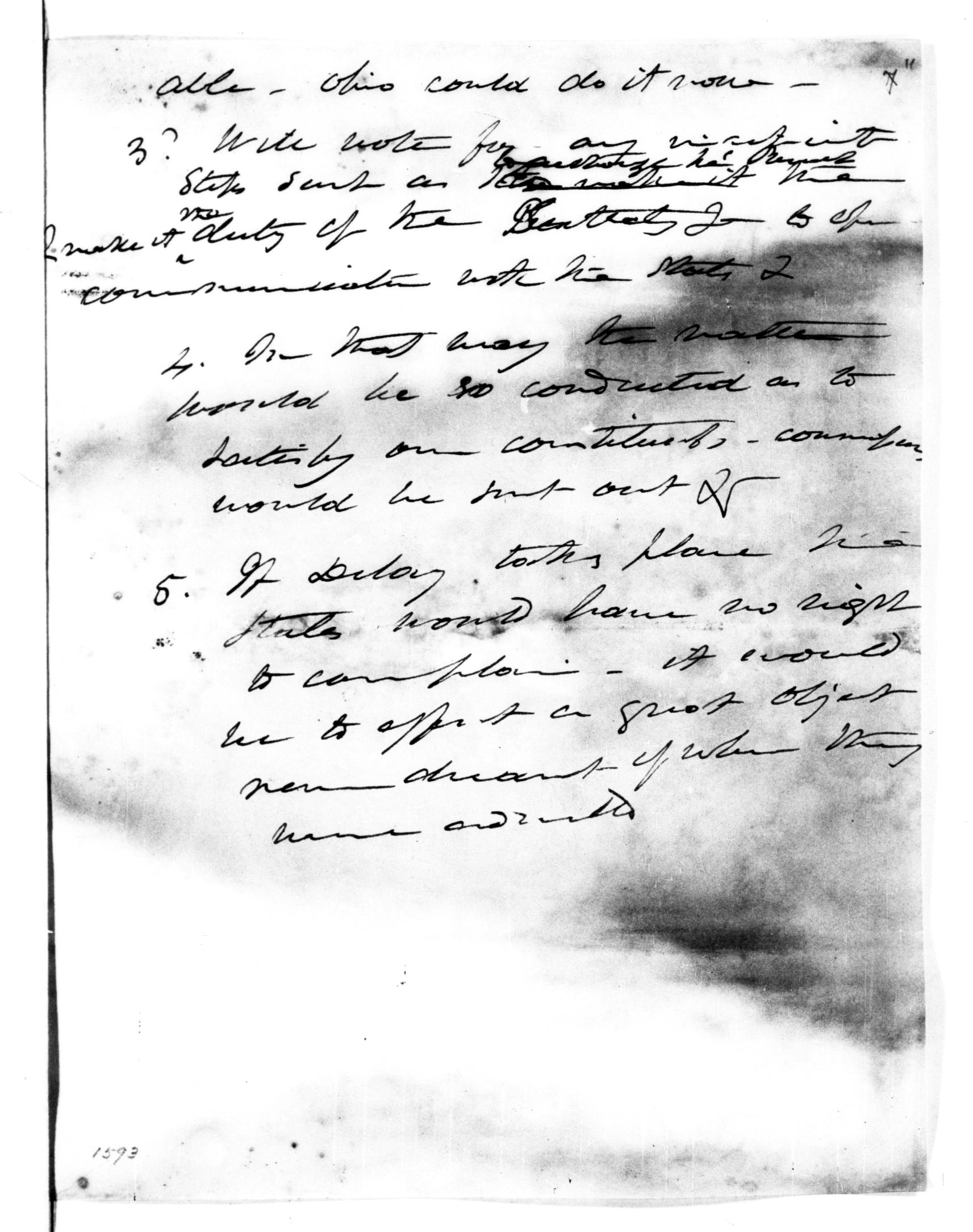 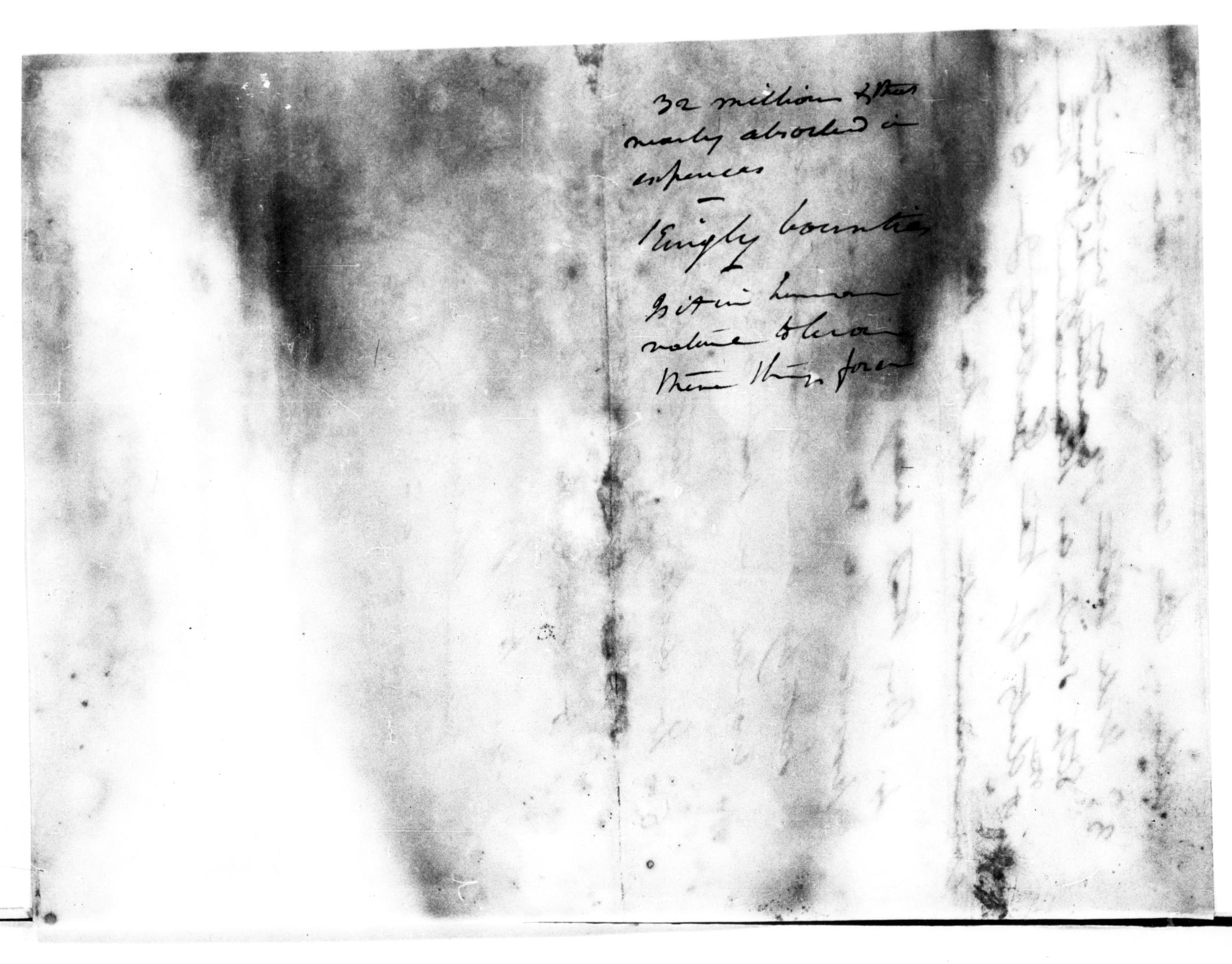 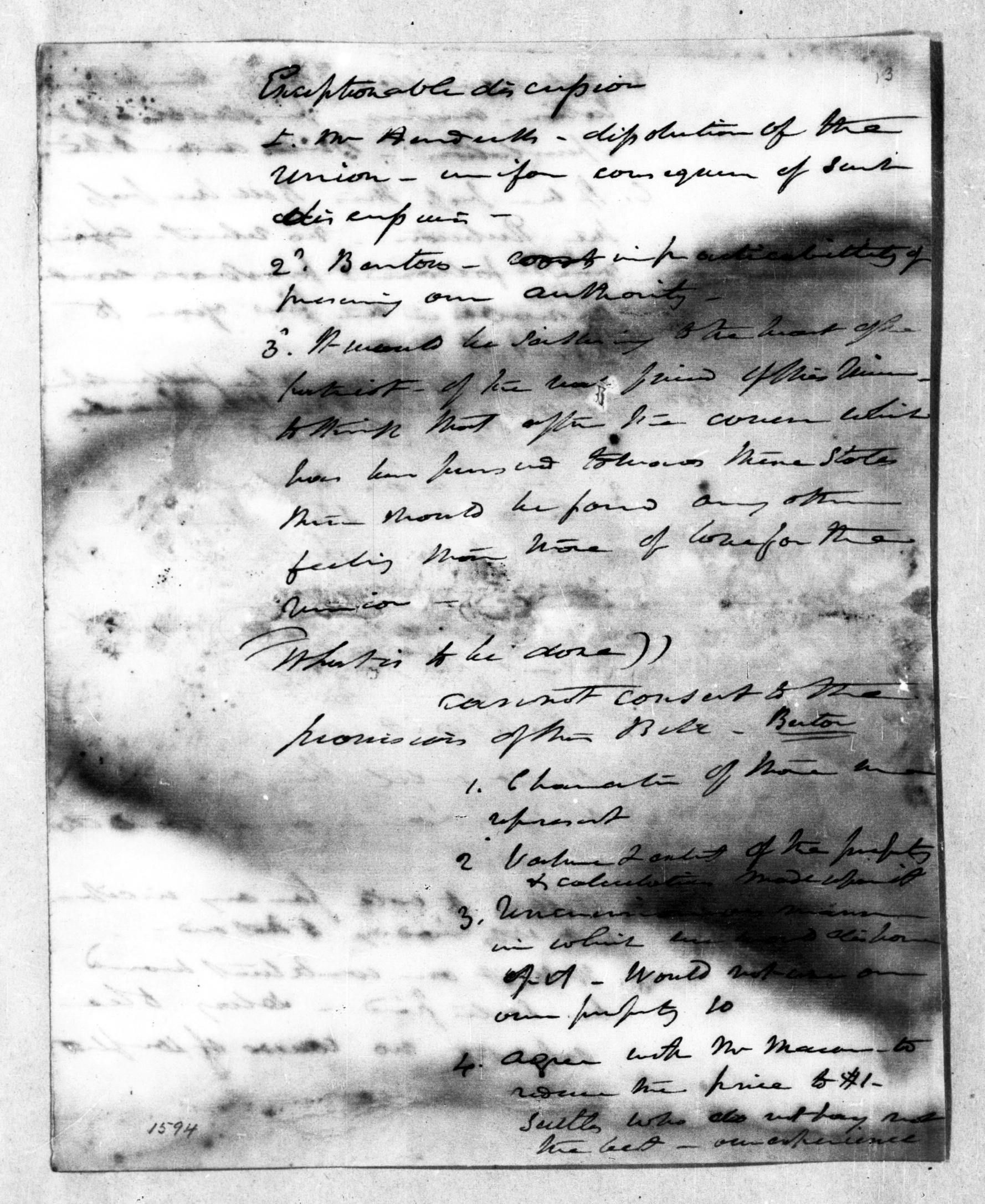 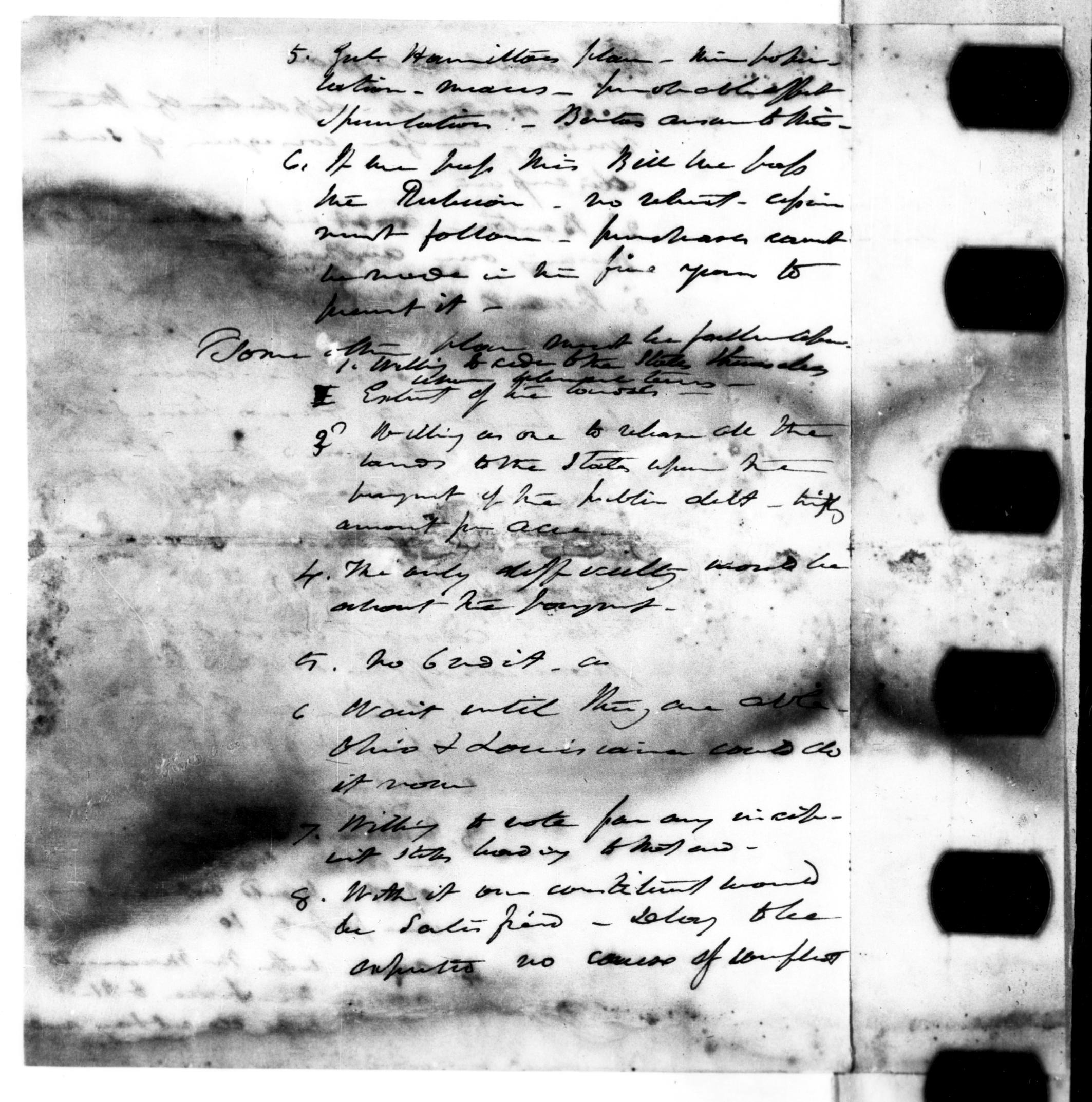