I like the openness and candour with which you express yourself respecting my friend [Ver]planck at the same time that I think you have formed an erroneous opinion of his character. If any person ought to know him I should; our acquaintance commenced in boyhood, and since we have been engaged on the same side in Politicks, it has matured into friendship. In acting with him I have had frequent opportunities of witnessing his devotion to the Republican interests; nor have there been wanting occasions when his fidelity has been exposed to severe temptations. As a proof of his political sincerity and constancy, I shall only refer to one instance, among many others, that might be addressed. In the election of 1822, our Party in a very capricious and illiberal humour, refused to nominate Verplanck for the assembly, tho’ warmly supported by his friends. As soon as this fact was made known to the adverse Party, he was strongly prepared to give his consent to be nominated on their side; but this ^offer^ he promptly and honorably <illegible> ^rejected^. And notwithstanding the ill treatment he had experienced, he gave our Ticket a most hearty and efficient support. His conduct at this time was the more meritorious, because it was at a period when the affairs of our Party were becoming desperate, and when unfortunately defection and even open apostacy were but too prevalent. It was impossible to exhibit greater regret than he did at the defeat of our Party, or more sincerity to retrieve its fallen fortunes.

There are certain situations in which he may be placed when he may appear to show the defect you impute to him, but it does not proceed either from a selfish dissatisfaction or from any apprehension to assume responsibility. The behavior of many of those who came over with him to our Party some of them too his particular friends has been of such a character as to cast a shade of suspicion over the whole of them. Proud of the honors which the Party have conferred on him, and ambitious to preserve them, he is tremblingly alive to whatever may have the least tendency to impair the confidence at present reposed in him. Not being originally a member of the Party he does not consider that he has a right or that it would be ^safe or^ prudent ^in him^ to act with the same freedom or take the same liberties that you and I might do with perfect impunity. Hence his caution, and hence his hesitation in doing any thing which carries the appearance of the least deviation from strict Republican orthodoxy.

The principal defect that I have observed in Verplanck’s character is a disposition to indulge in sarcasm. He has corrected much of this in latter years, but I cannot say that he has entirely overcome it. To those not accustomed to him, there is something very disagreeable in his manners; he approaches you with awkwardness and leaves you with abruptness. But making allowances for all these things, I earnestly advise you to cultivate a good understanding with him. You may rely on it, that you will always find ^him^ a faithful friend and such as an able auxiliary. Not being endowed with what our friend Peter R. calls floor talents, I do not expect that he will distinguish himself much in the house; but on Committees there is no man who will be more useful or conspicuous.

Yesterday when I left town, there was no news from Albany. Conjecture is busy in endeavoring to ascertain the person who is to be nominated to the Woolsack. Jones, Oakley, Savage and Betts and to add to the number, yourself, are all spoken of as likely to be nominated. Should his Excy think proper to nominate you, you must not decline it. From the delay that has already occurred in making the nomination, I apprehend that the Governor encounters some difficulty. I shall keep this letter open till tomorrow so that if any information is received, you may be apprised of it.

23d Jany. On arriving in Town I have just learned that Jones has been nominated Chancellor & that the nomination was unanimously confirmed. Is not this very strange?

[Text for the post script is taken from a Library of Congress Transcript.] 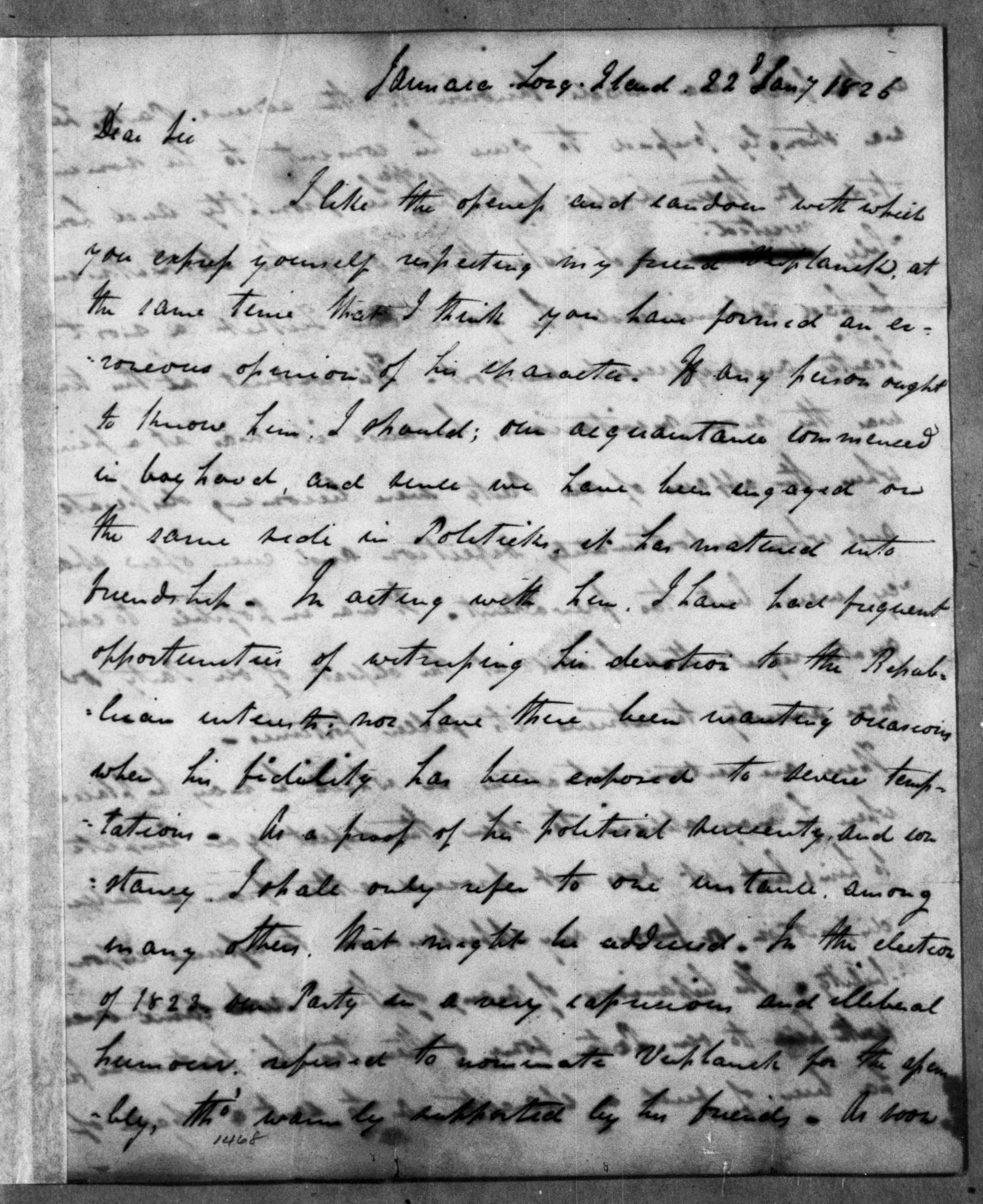 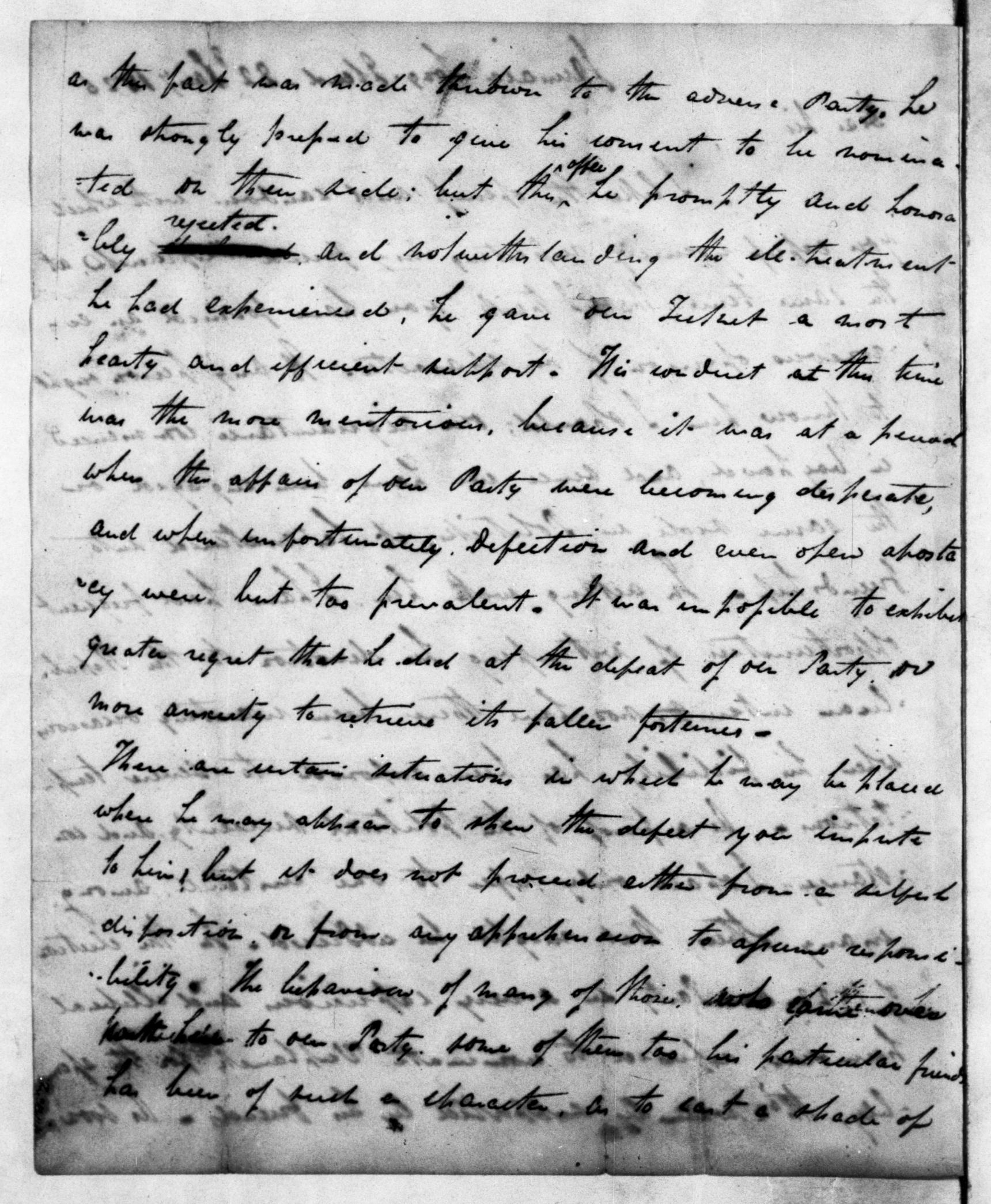 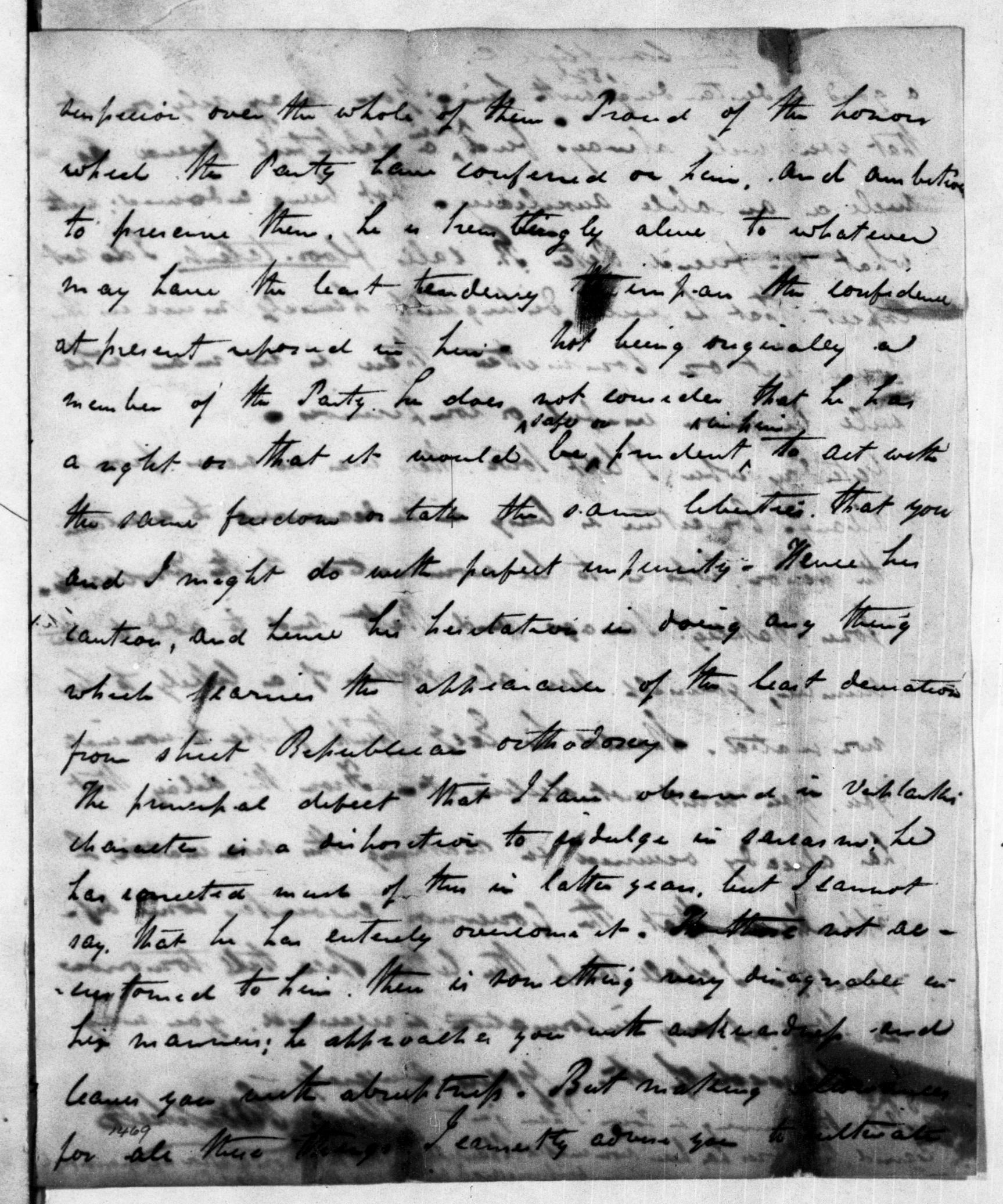 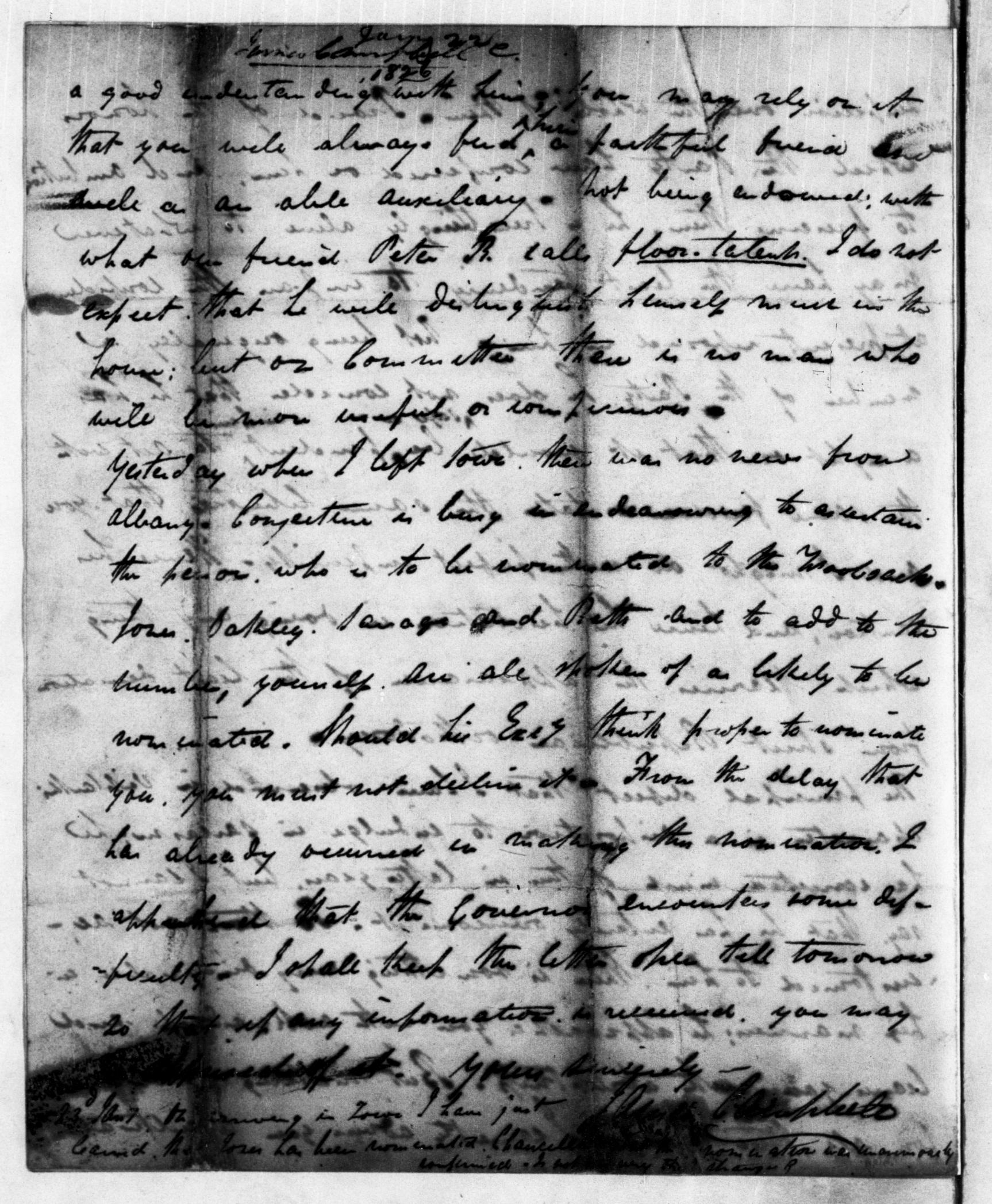 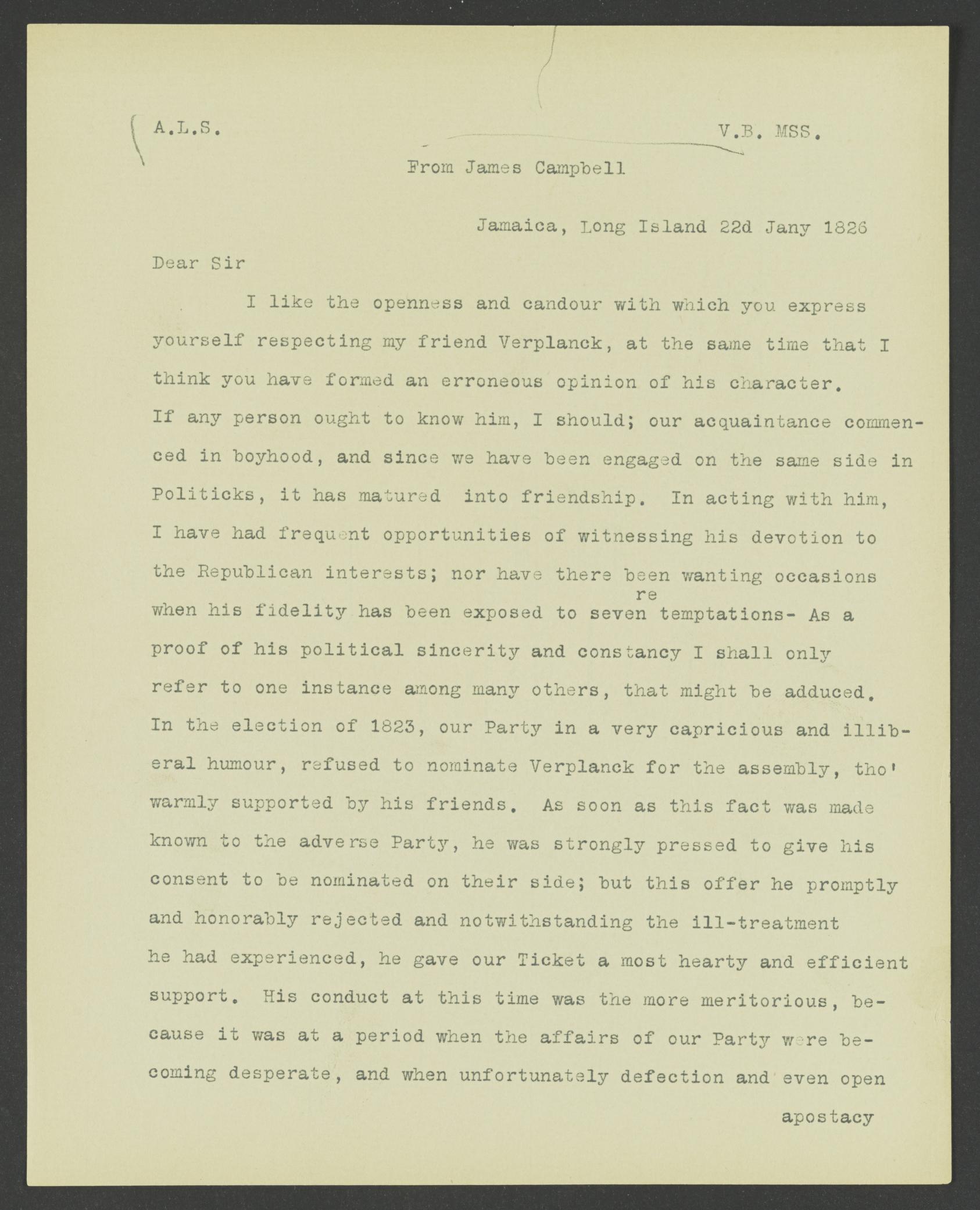 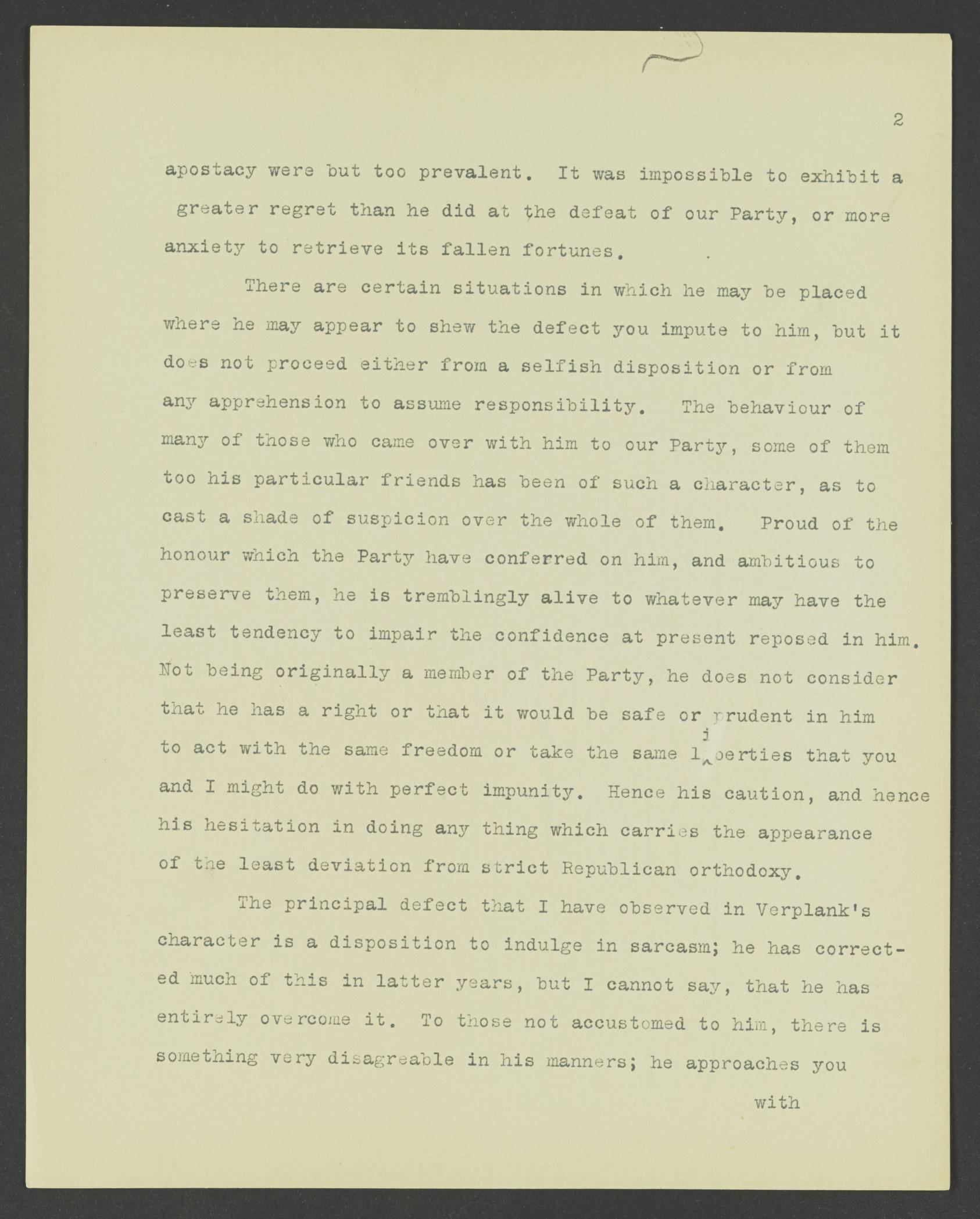 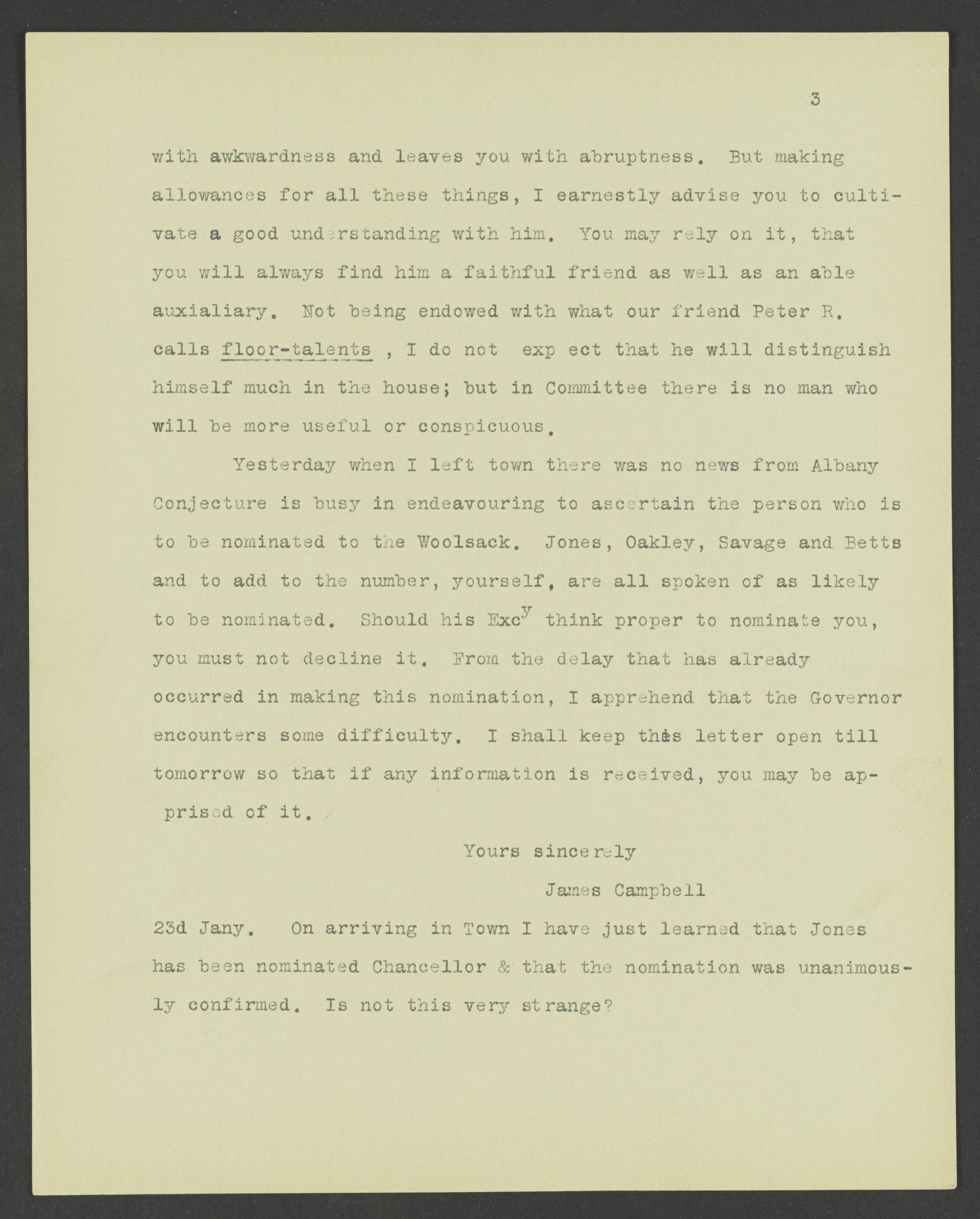