I wish you & your family not forgetting my frsweet heart Miss Margaret a very merry Christmass. Here the day is dark & raining & except the promise of some pleasure at dinner with Mr & Mrs. McLane nature & every thing else appears to be out of sorts. Nothing has transpired of much interest in the political world. The Jackson men being in the field are of course looking out for the weak points in the enemies lines and are ready for the assault when opportunity offers. We of the Crawford school lay upon our oars and will not lightly commit ourselves except in defense of old principles. The <illegible> debate on my Resolutions will be extensive & probably lead to a review of what has been & to soundings to see where we are now. It is supposed by some that we shall have a majority but I am not so sanguine. The West want roads & canals & must have them, rightfully if they can otherwise if they must. I believe however that we shall be able in the end to break up all interference on the part of the Genl. Govmt without a previous amendment of the Constitution. It is strange that our people are so indifferent upon this subject. There is no State in the Union that has as much interest in it as ours; growing out of our hard expenditures & liability to future contributions for like work in other States. The administration are intent upon sustaining themselves & it appears to be immaterial whether they derive their aid from Jew or Gentile or whoever else can help.

My interest to Mr Varick will become due on the first of Jany. Have the goodness to let Mr <Collins> attend to the enclosed & out of that & the use of my check for the residue to pay the amount. If you can in any proper way get my business ^closed^ with that prince of quibbles, Mr K you will confer a great favor on me by so doing. Can you not suppress your aversion to talking to the creature on my account & get him in the way of making conversation with you on the subject & having done so after a while to ask him whether he had offers to me as to what he would give me over & above &c and say that you thought it probable that I would have agreed to reconsideration &c stating the losses & I would sustain by swiftly receiving my money & interest. If you said this the first time you converse with him he would think you <instructed &c>.

It is not necessary to say in how much it would be preferable to get a reasonable compensation for loses &c from him but rather than to speak to the man again I would accept the terms he offered if that could be done without humiliation I impressed him so strongly with a belief that I wished the place that he did not think it worth while to make me an offer. So at least I think. If you can come to speak of terms, a proposition that he should give me lots enough for a building that would be the proper suggestion to begin with & refer the whole confer on me the additional obligation to take this matter under your special charge and do the best you can for me which will I know be much better than I could do for myself. Write me fully what it is doing about Senator – Secty of State &c. Mr Clinton &c.

Make my best respects to my friend Mrs. Butler & believe me to be as heretofore

I forgot to tell you the most important matter of all. I have discovered a complete remedy for the Dispepsia & am now enjoying a better state of health & spirits than I have done for the last ten years. I had almost said 40 but forgot that I had not seen that number yet. It is simple charcoal taken in water 2 tea spoons full every morning. Try it whether you have the complaint or not. It will prevent you from getting it. I have rcd. letters from Mr Croswell in New haven. John is there & well off & in good health & spirits & my writing is bad but will improve after I have used a little more Charcoal. 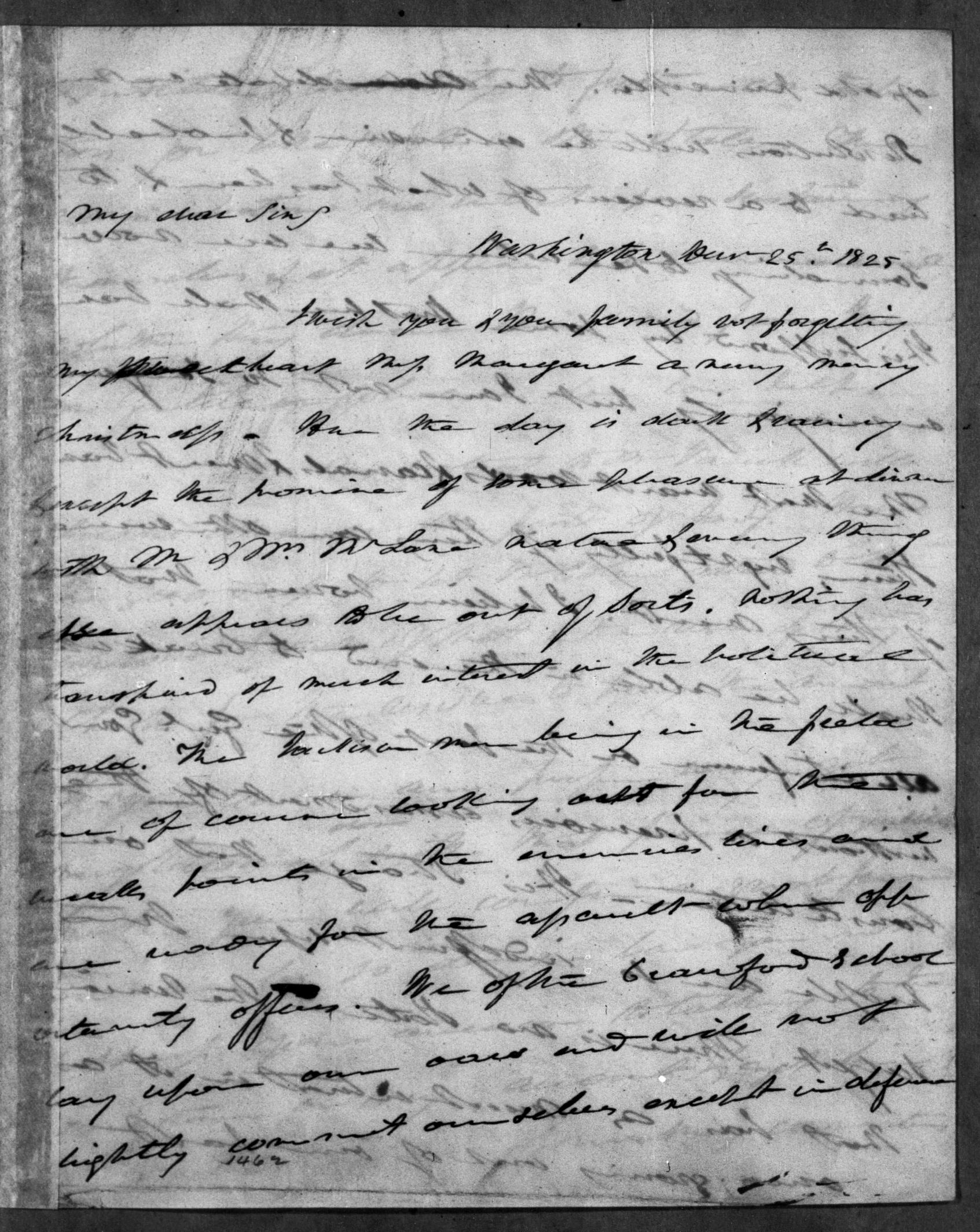 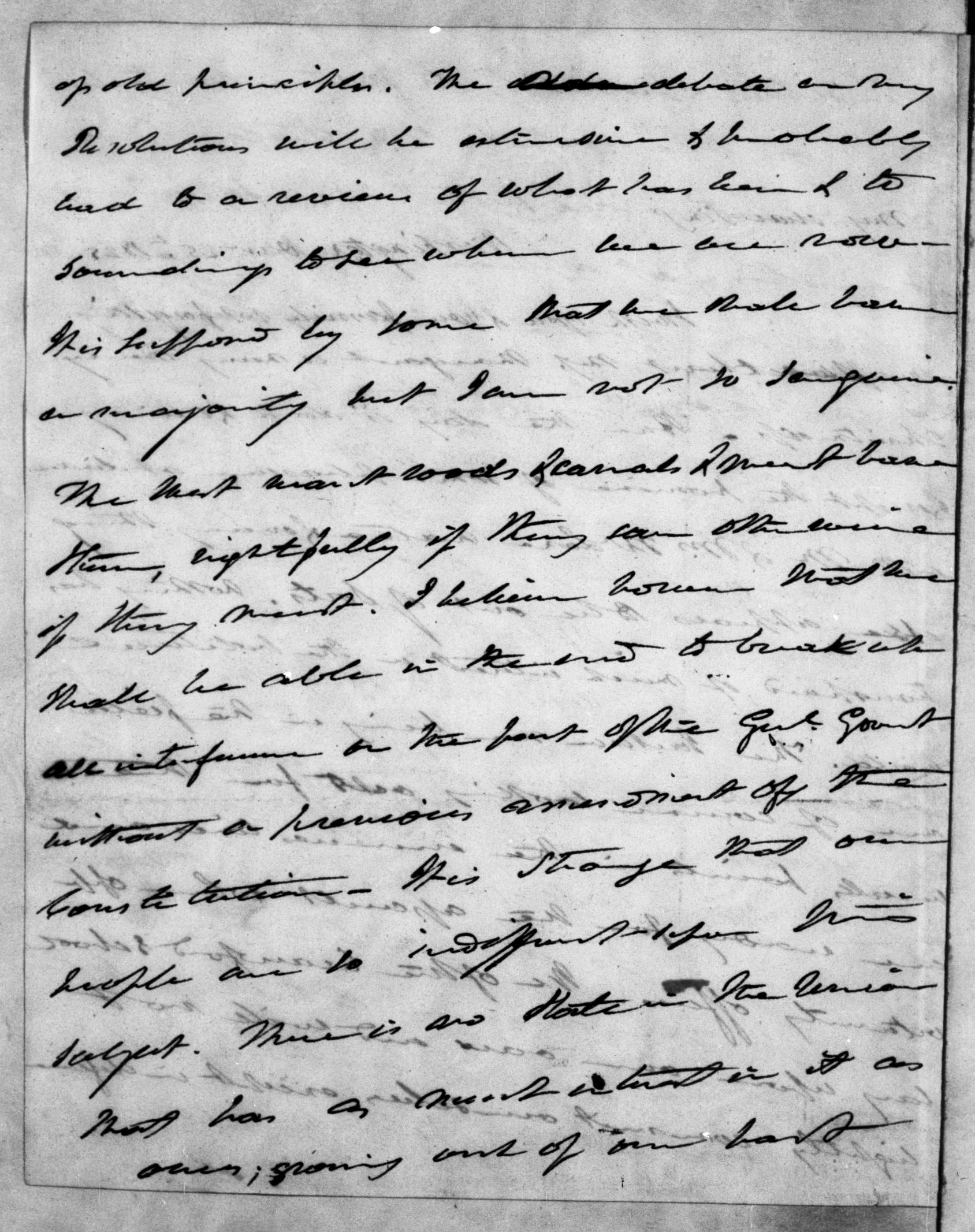 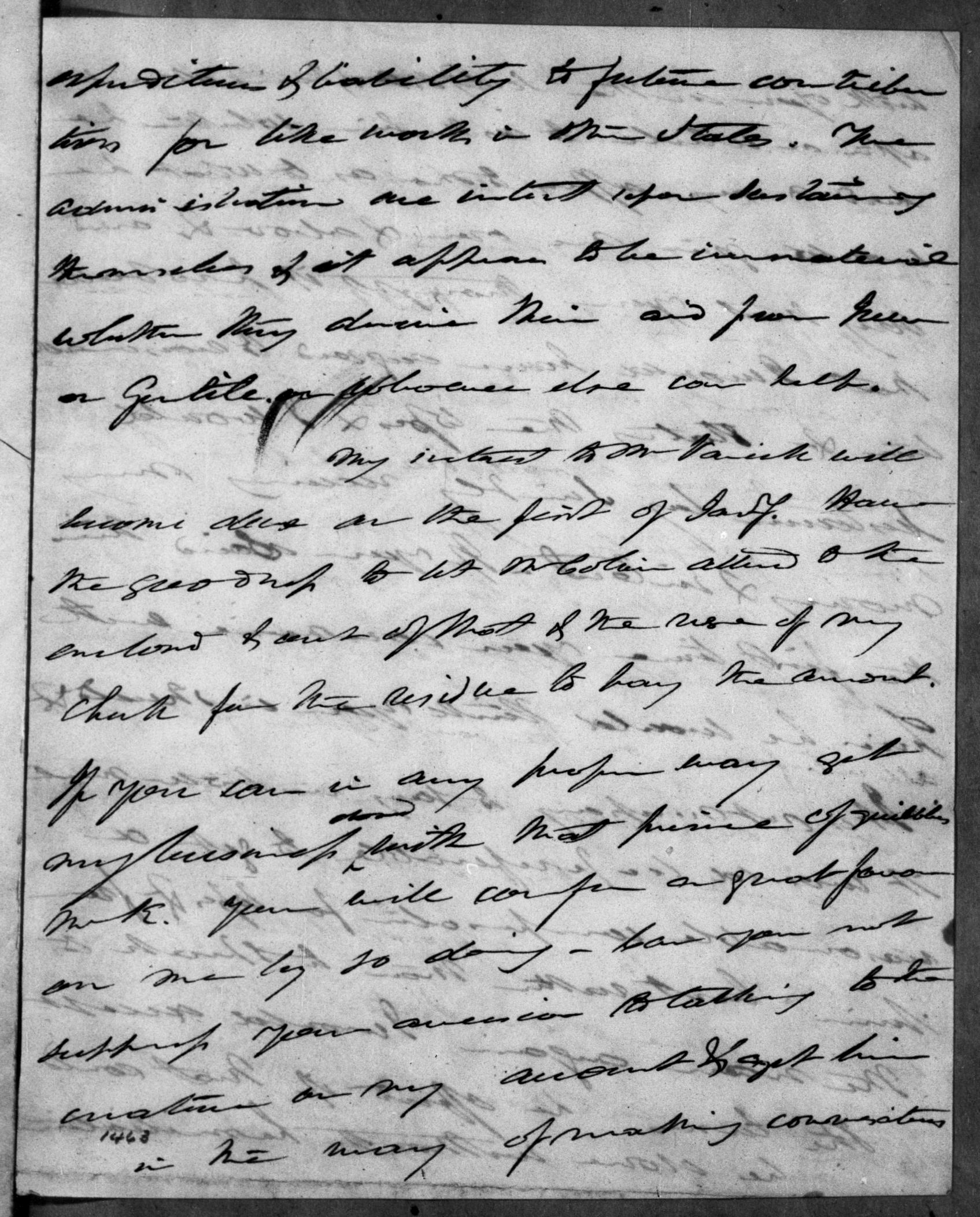 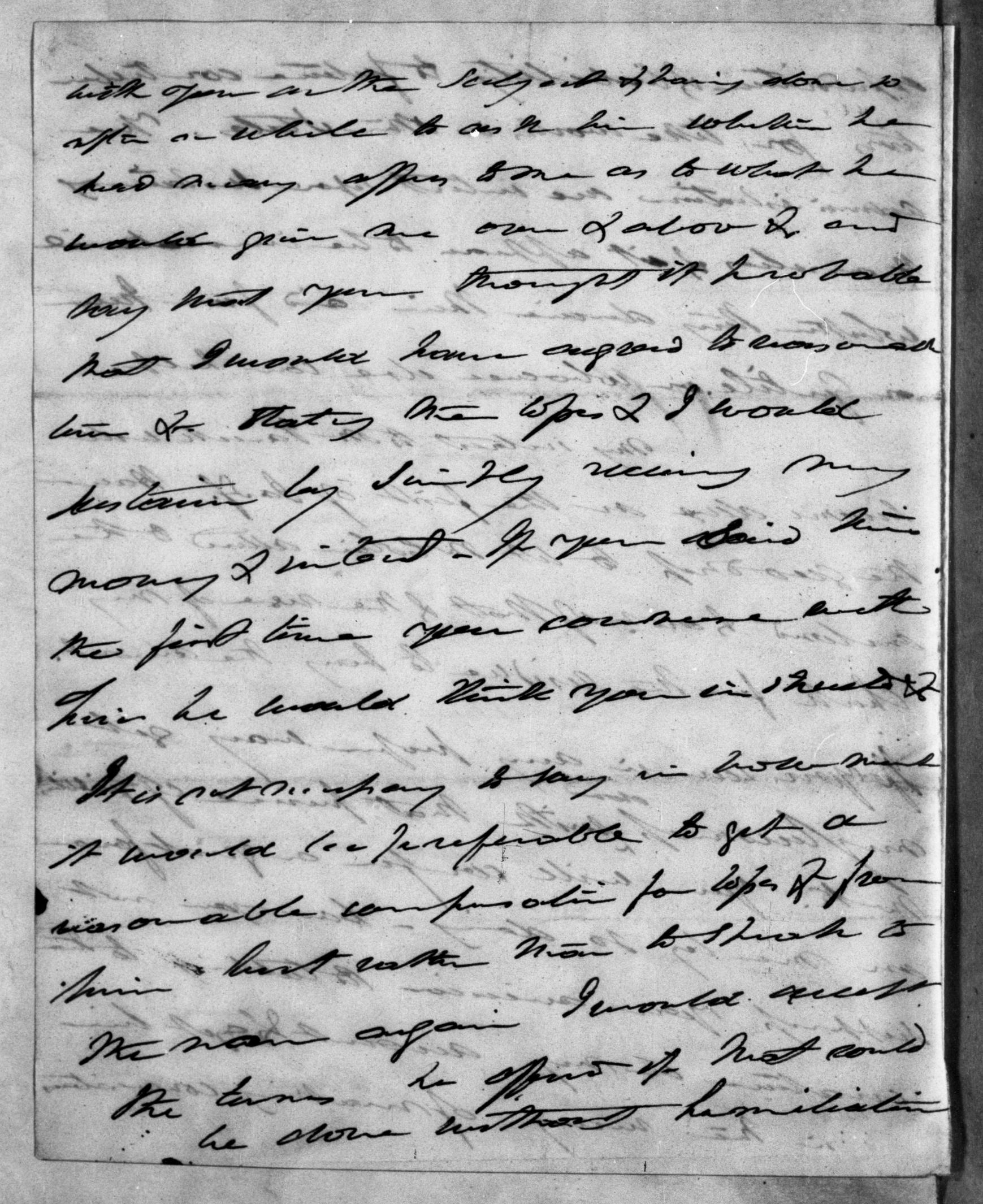 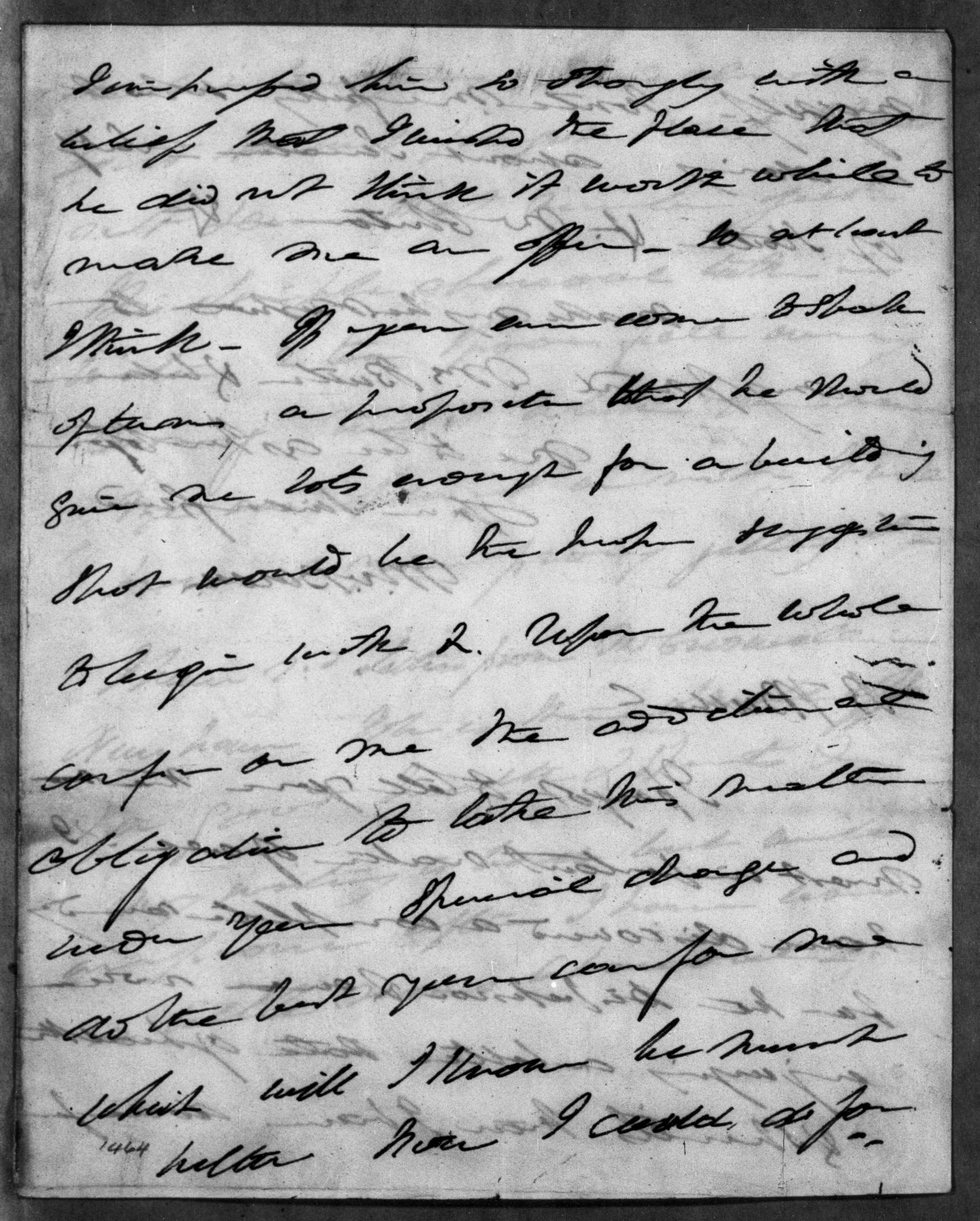 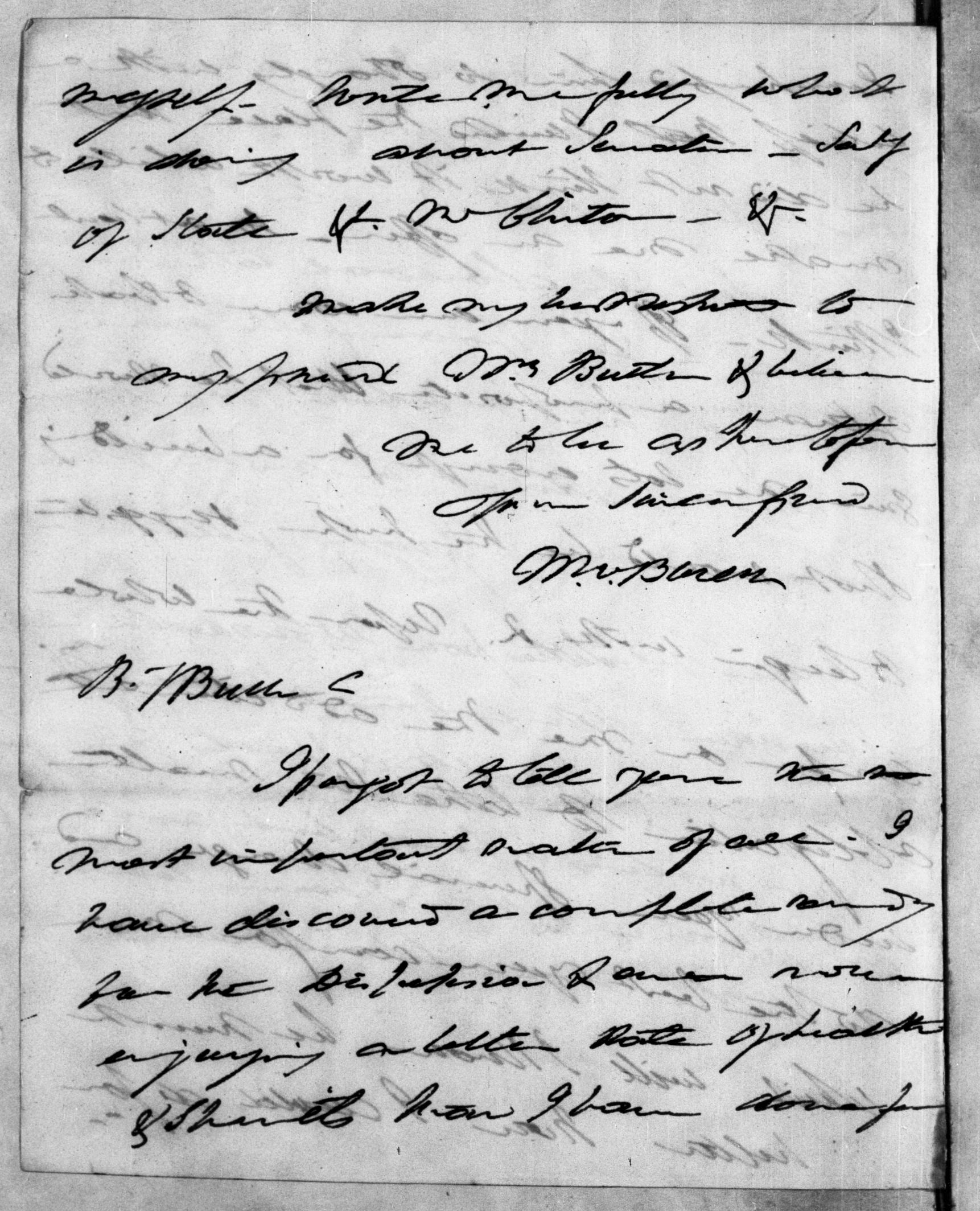 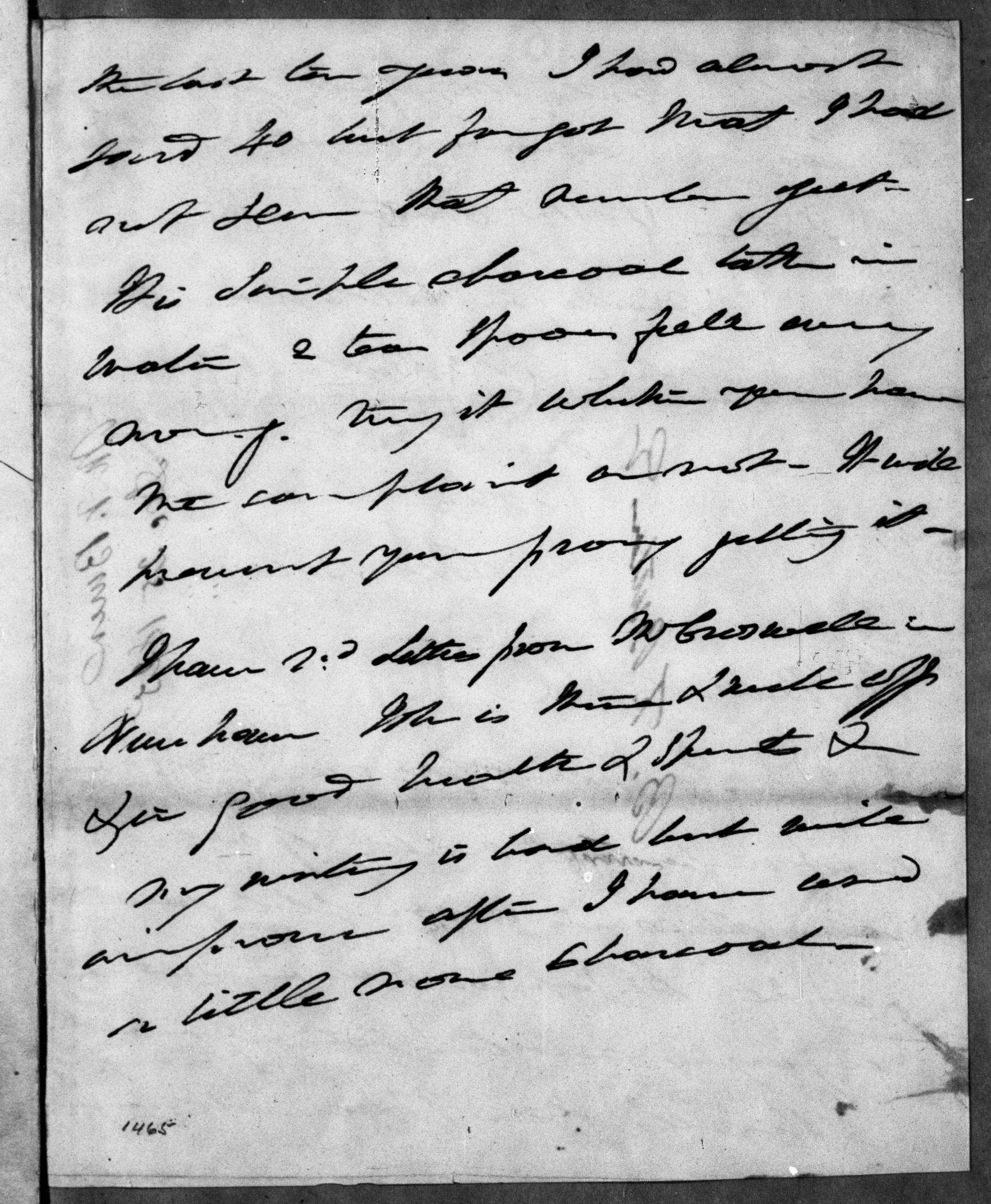 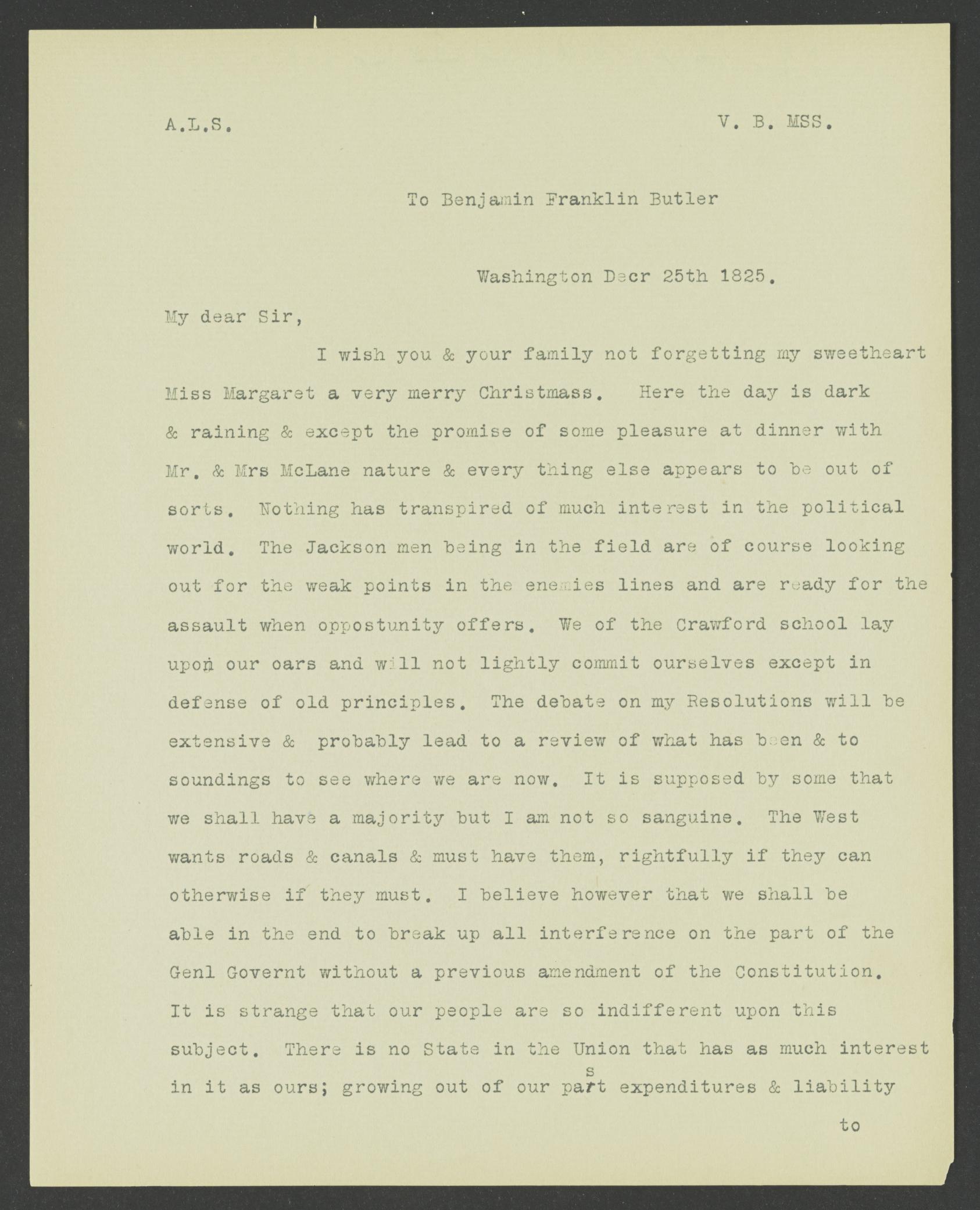 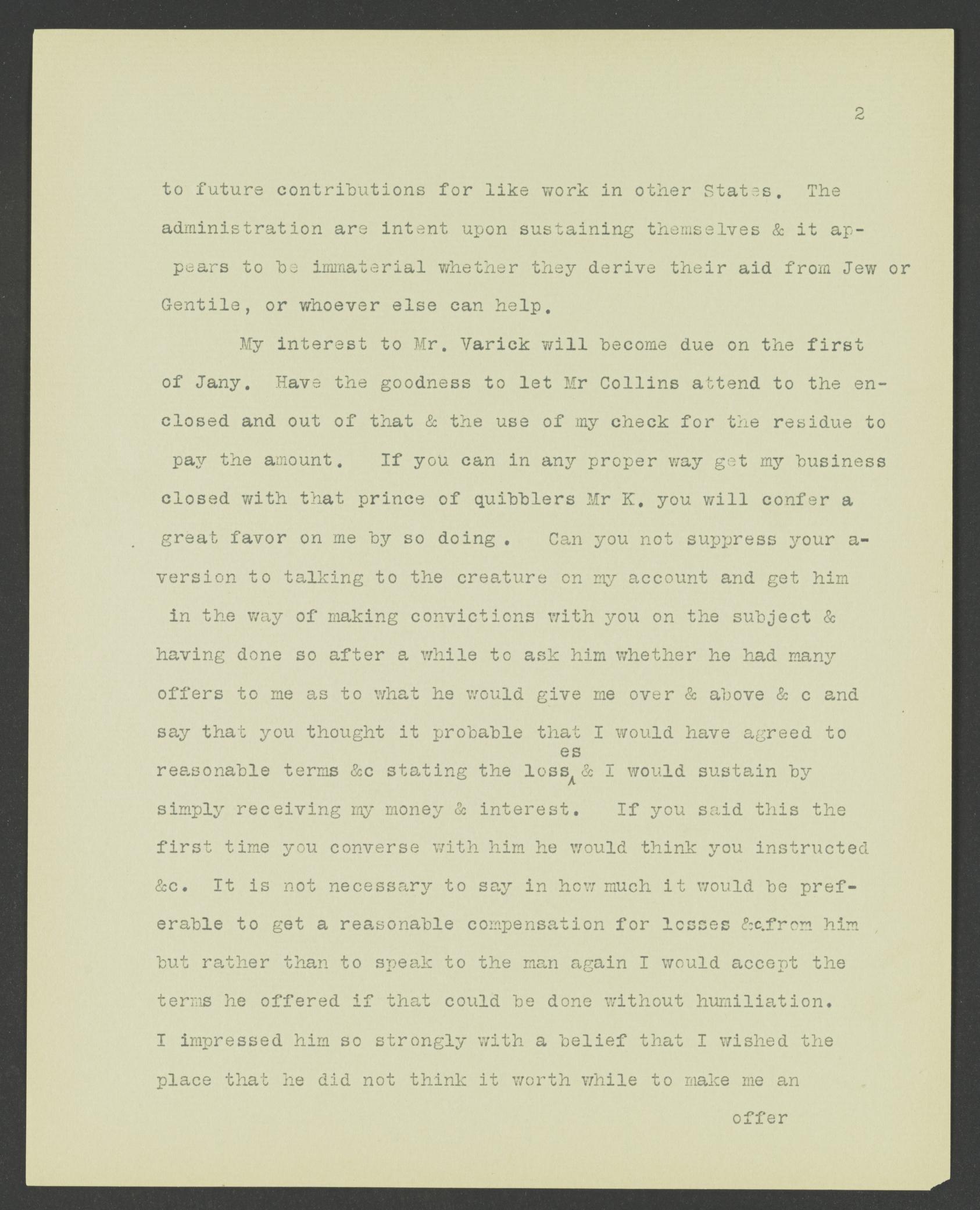 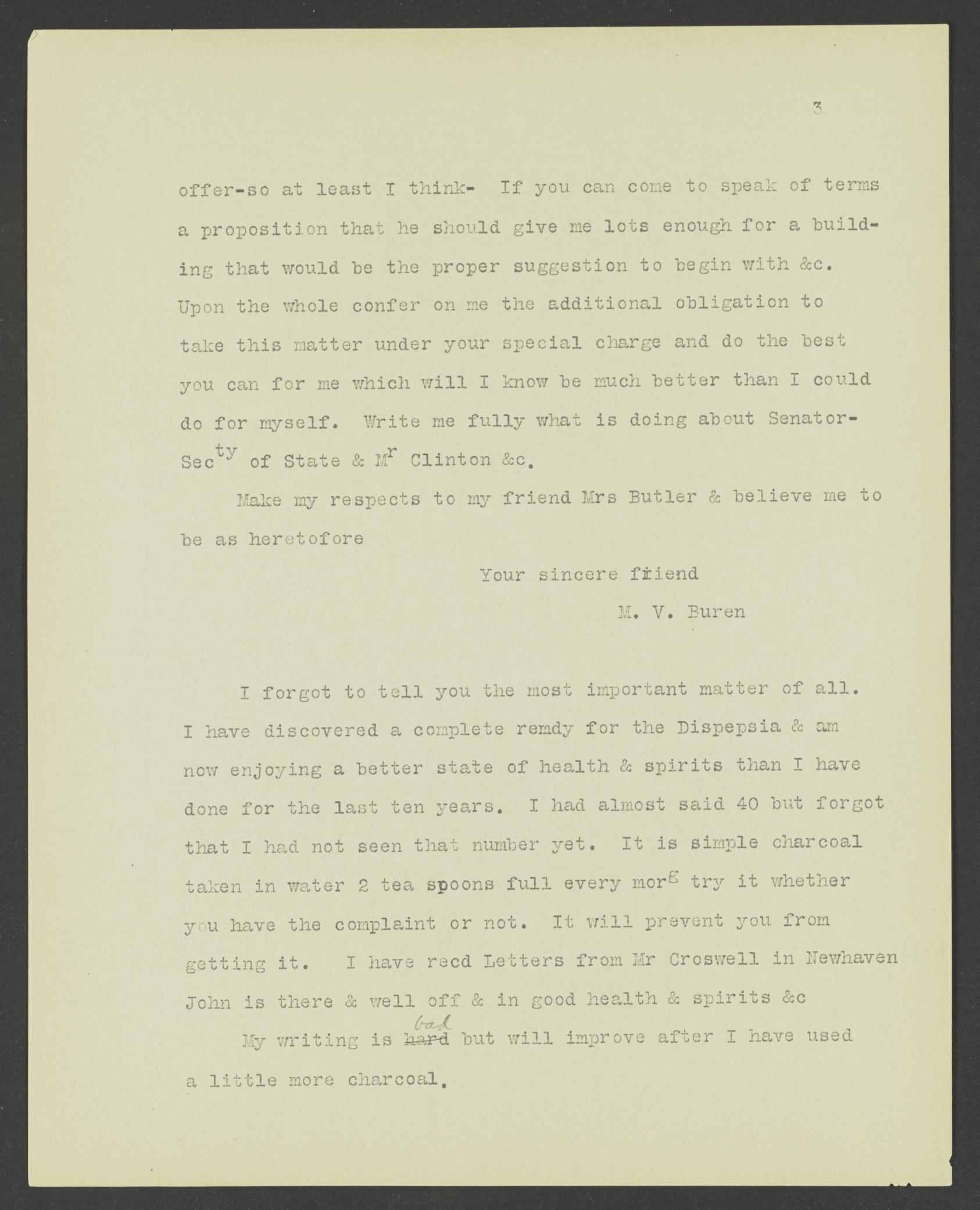