Enclosed you will find a letter addressed to yourself about my brother William, for whom I am anxious to obtain orders for Entering into the service. It is such a letter as I supposed you might with propriety transmit (as you suggested) to the Secretary of the Navy. I regret that I was out of town when you called at my house, but was pleased to learn that there would be no difficulty about my application with Judge Woodworth. Gen Root has been here & is decidedly in favor of Col. Young for Speaker. He thinks the U.S. Senator should not be taken from the Judiciary. In coming up from New York I had a singular conversation with William James on board of the Steam Boat. He desired me to say to you either in person or by letter that Mr Clinton had given him a carte blanche to treat with you. He said that Mr Clinton was determined to be a candidate for President at the next Election, that he wished you to keep yourself (this winter) uncommitted on that question that Mr C. had paid you sundry compliments &c & that he wished you to succeed him in the gove[rn]ment of [...], or if he Mr C. was President you might [h]ave under the General Government what you wished. I arrived in Albany the day after you left it & have therefore put on paper the substance of a very long conversation with Mr J who was excessively annoyed with the defeat of his Party at the recent Election. I have detailed this conversation because I promised to do so, but do not wish by doing so, to draw you into any correspondence upon this subject, for I should prefer to let the matter drop here. And indeed I do not know that I should have mentioned this subject to you at all, but I thought as Mr. James was a confidential adviser of Mr. Clinton, that you ought to be possessed of his declarations & especially as he desired that you should. Mr James says Mr. Clinton must be a candidate for Governor next fall because he says Mr C. is so poor that he cannot live without it.

All our friends are well & in good spirits. 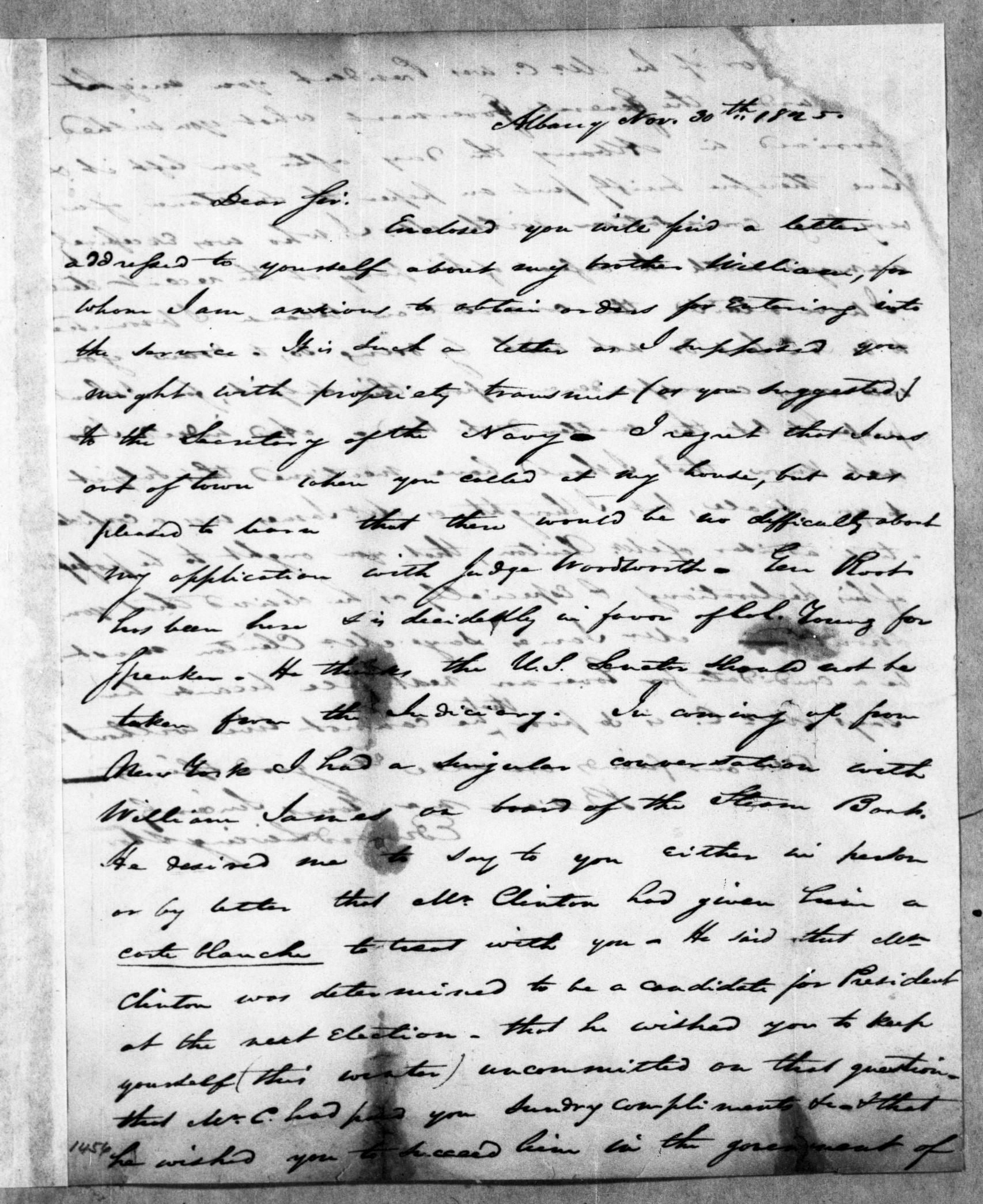 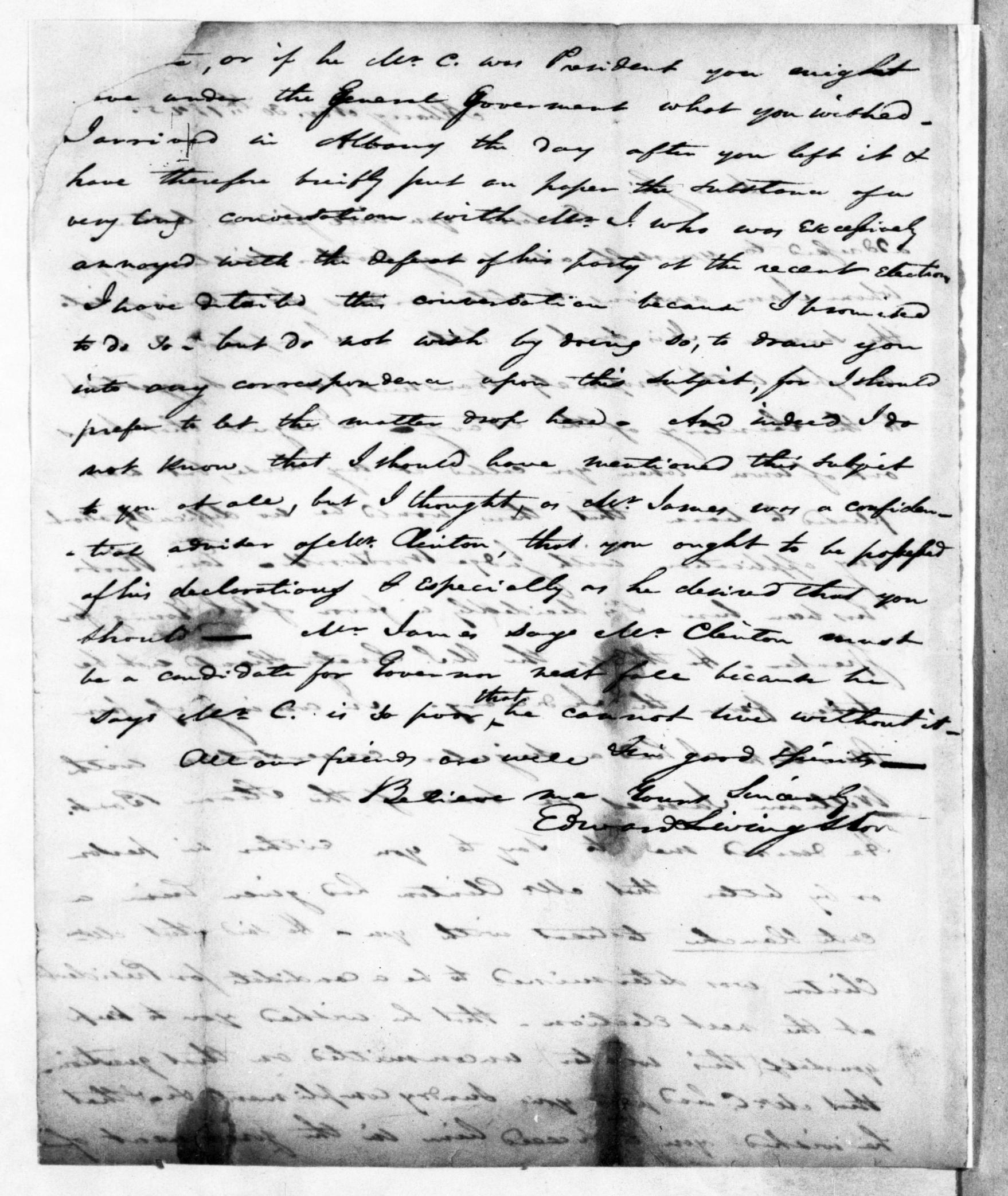 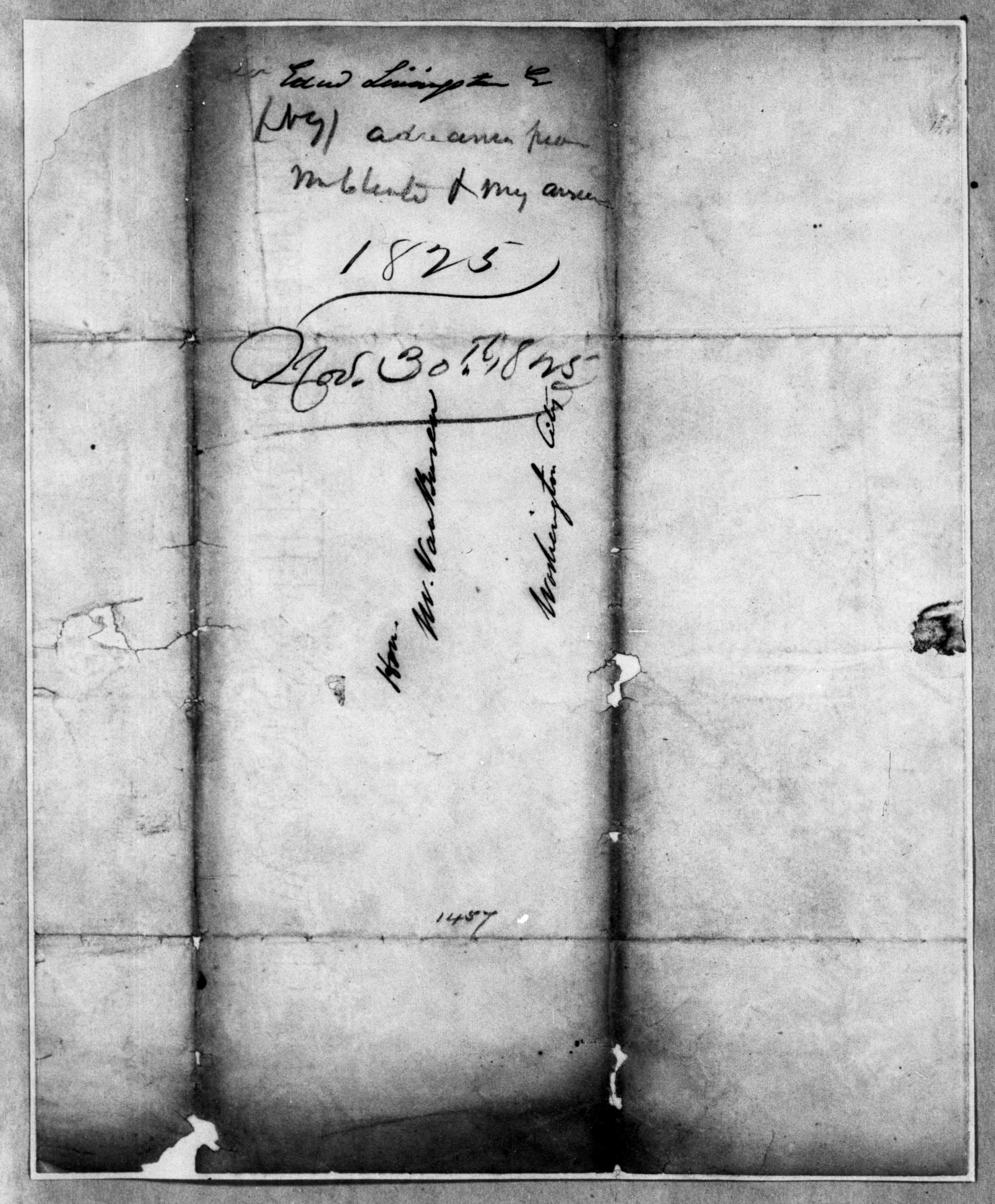 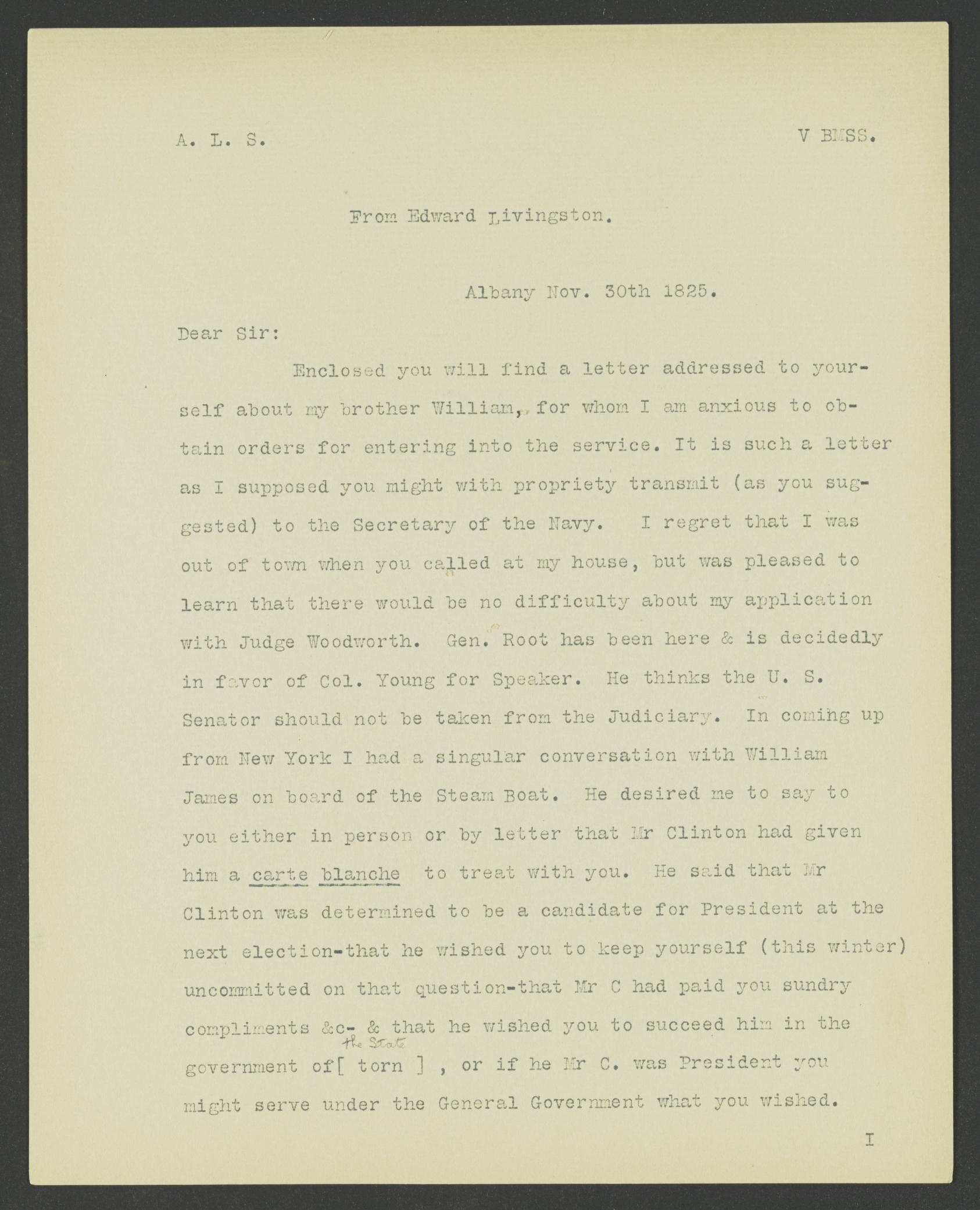 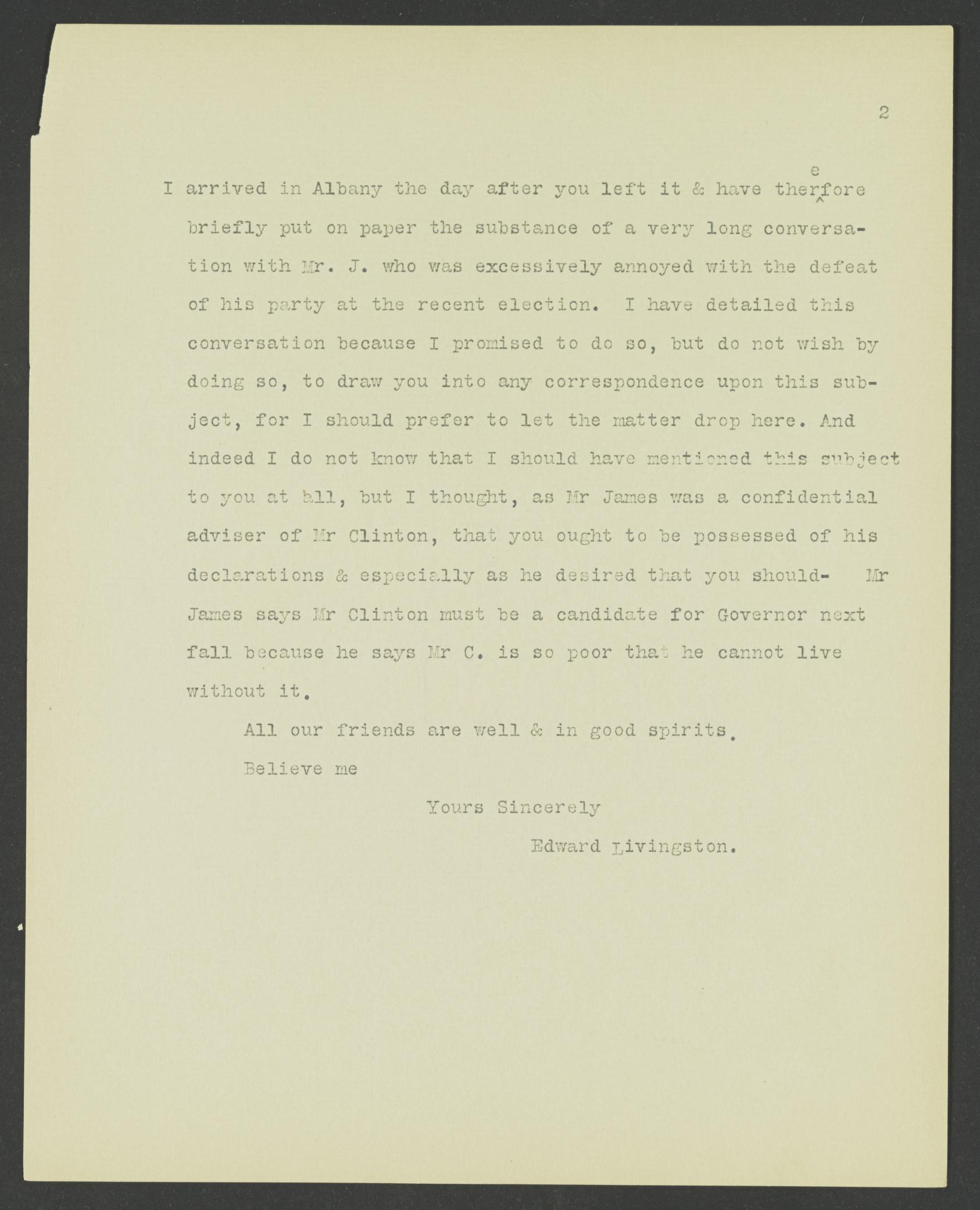