Yours of the 20th inst was received in due course of mail. I entirely concur in the propriety of your course as to the publication of Varicks letter. it The venom is of that Calumny was destroyed by the light, and I congratulate you upon the probable result of the ballot for Senator. There have been indications of a determination the part of two or three of the members from this City not to submit to the majority on that question but they received such strong and general marks of reprobation as to silence them if not to induce a more correct feeling on that subject. Van Ness it is understood has withdrawn his opposition probably from dispair of success so that there will be very little or no further difficulty as to the Choice.

I have been long satisfied that there are no remedies for the diseases of our State but such as may be drawn from a well organized Convention; and have therefore regreted to learn that you are not very desirous for that measure and that we should differ about the propriety of one great change which is contemplated to result from it; I mean Abolishing the Ct of Appt. I am a little surprised if I am correctly informed that such should be the result of your reflection because from the very general assent to its propriety as well as from the our obviously correct course of reasoning I believe that in this instance your opinion is incorrect and I regret that this is the State of your mind because I fear without your zealous cooperation that measure I have so much at heart will not be effectuated. However I will leave thate discussion of that subject until I ascertain your opinion from the best source, and direct your attention to any other for which the pleasure I have in communicating with you this letter is written.

From the course pursued by Clinton and his cabinet there cannot be a doubt. That they do not intend to permit the constitution to be submitted to the delegates of the people for amendment; until such is the State of Public feeling as to afford them a reasonable hope that their Interests will have a preponderating influence. The Sacrifices of character which they have made, and the great popularity they have periled by requesting the Bill were not for the purpose of having the Election defered a few months or in order to receive evidence of the peoples wishes nor because the detail[s] of the act were not exactly squared with their views of what was best. It Their conduct was part of a System dictated by their fears that the measure was to be used as a means of depriving them of their office and therefore they defeated it and they have rendered that certain (if there be a Convention) which before perhaps only rested in received its existence from their consciousness of what was right. Therefore Now feeling that even the hope of forbearance is distroyed they will find some means subterfuge to destroy the measure in whatever shape it may be presented to them or they are less desperate and made of softer stuff than their actions indicate.

From these and other obvious considerations, believing as I do, that under existing circumstances there will not be a convention, and that the State of things will go on from bad to worse, I have often asked myself, What ought to be done? Use the power we have to remedy as many of the evils as are within its scope; and among others distroy the bad influence which now controuls our Judiciary by the appointment of a sufficient number of virtuous Judges to form such a Majority on the Bench which as will not lend that institution to the support of the most profligate combination that ever disgraced this or any other State in the Union; That if as by its Integrity & Industry and the Justice of its decissions will restore the confidence of the people in its purity and by withdrawing it from party Strife will Shield it from party accrimony and degrading commentary.

It is and has been admitted for a long time past by the bench and bar that an additional number of Judges are called for by the business of the Court which has and must with an increasing population progressively to accumulate upon the Bench in Bench until delay becomes a denial of Justice. Thus much at present for the universal fitness and propriety of the measure now for its expediency; Which I would not for a moment look to If I was not entirely satisfied of its correctness. and if from these and other reasons which your better acquaintance with the subject will afford you; you do not arrive at the same conclusion I am conscious you will not proceed a single step further with me but before you make up your mind against the measure as it is one on which I have reflected much and with which I am entirely satisfied I pray you let me hear from you

By the appt. of three Judges with Yates and Woodworth we should acquire a majority in the Council of Revn. and thus the power to pass a Convention Bill with such other acts as the good of the State may require while without them no law can be enacted unless its expediency and the facts on which it rests as well as its constitutionality are demonstrated to the Council of Re[n]. The late usurpation having constituted that body in violation of its constitutional intendment; an integral part of the Legislature.

By the increased virtue on the Bench you would deprive The Faction of a party an influence it neaver ought to have possessed because such influence neaver should & neaver could under a virtuous administration of Justice have existed and in making the selection great care shd. be taken not to enlist the Strength our opponents would be deprived of; but, to disarm and prostrate it. The existance of our Judiciary in a State of independence in popular feelings depends upon their not exercising and thereby as a body not possessing party influence, while as Individuals their opinion firmly but temporately expressed will receive the attention which their private added to their Judicial Character deserves and as it might on occasions of danger from great popular excitement be usefully employed instead of being hackneyed in the ways of men it should be reserved for such emergencies.

We now possess the power but who can say in the mutability of human affairs by whom it will next be controuled. Is it not then as an act of self preservation a duty to ourselves to interpose a Shield between us and our friends defeated and the bosom of destruction which awaits that event to avenge its delay? Is it not a duty to prevent the malignant Spirit which so recklessly strugles to distroy our character by the foulest Calumnies (the only means he here possesses) from turning that which should be to us a Shield from oppression into a two edged sword against us. There are maney men whose capacities and Character fit them for the place and whose exertions deserve the reward is it not a duty to their having the power to provide for them?

My paper and the hour remind me that from consideration connected with your inconvenience I should stop which I do with the single remark that the superior excellence of this project is that its success if attempted and its results when effected are certain and certainly advantageous: Let me hear from you shortly but before you have determined. The measure as a strong one recommends itself to you and under the present excitement It may prevent a recurrence to much Stronger, less safe, and less effectual ones. 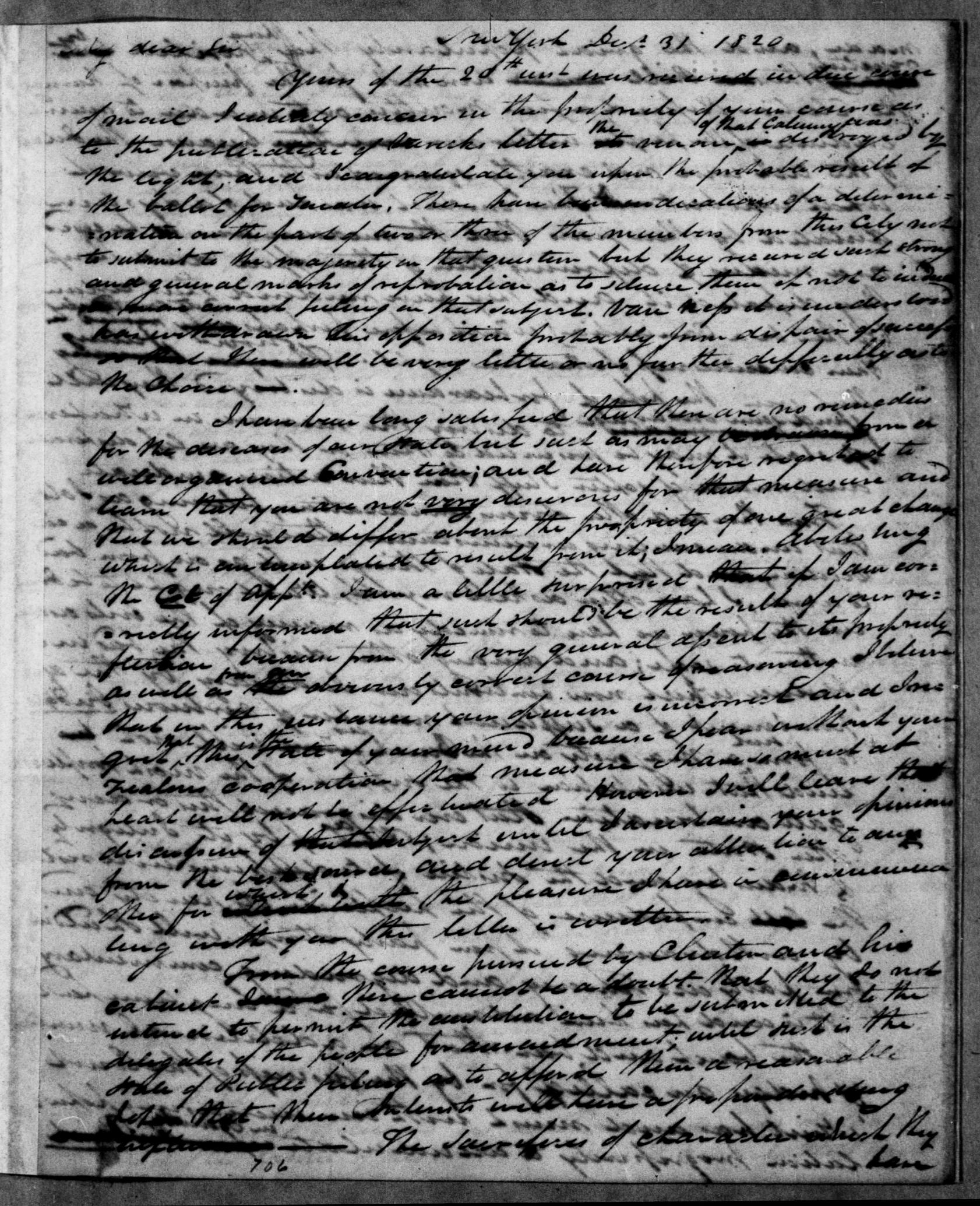 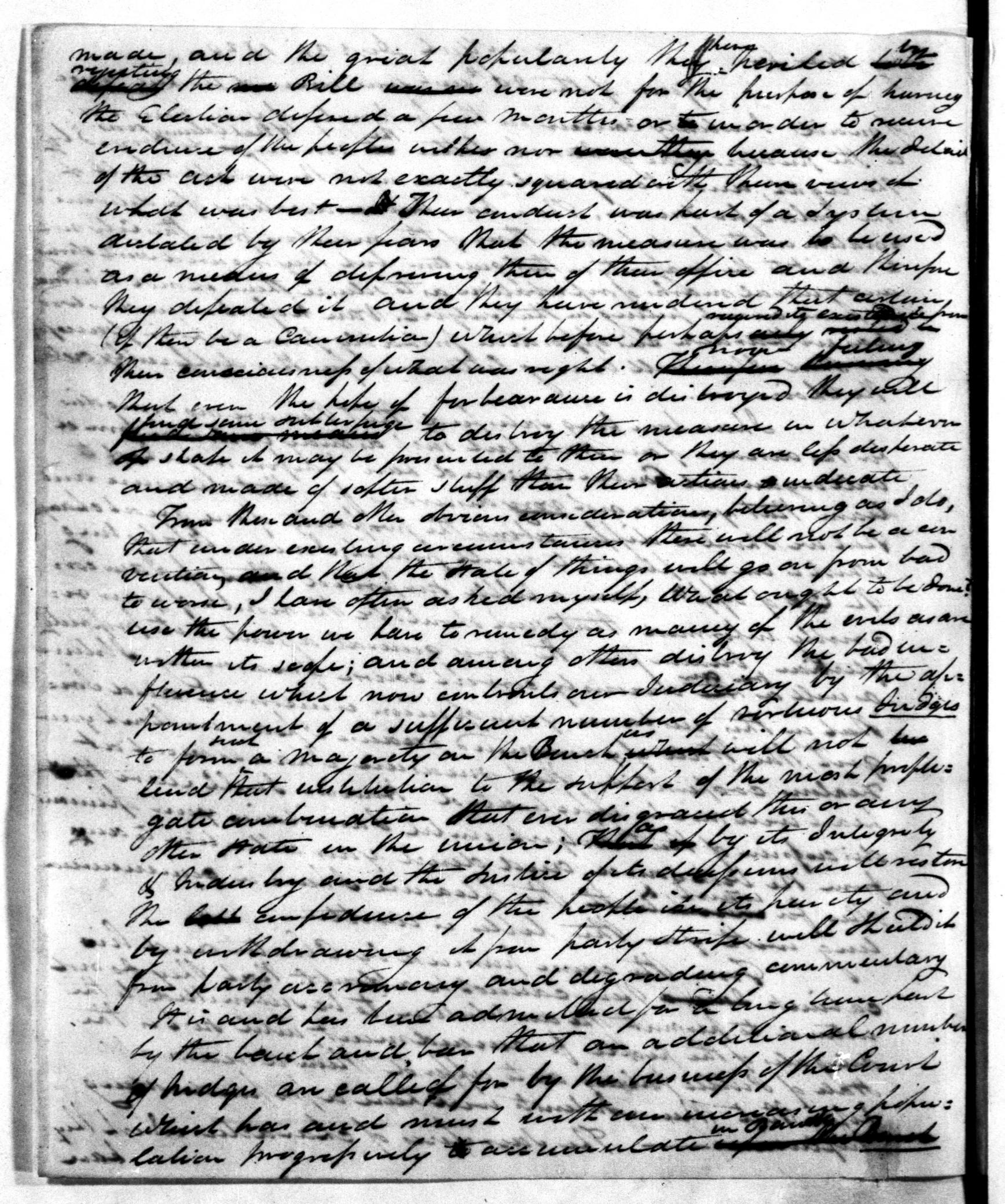 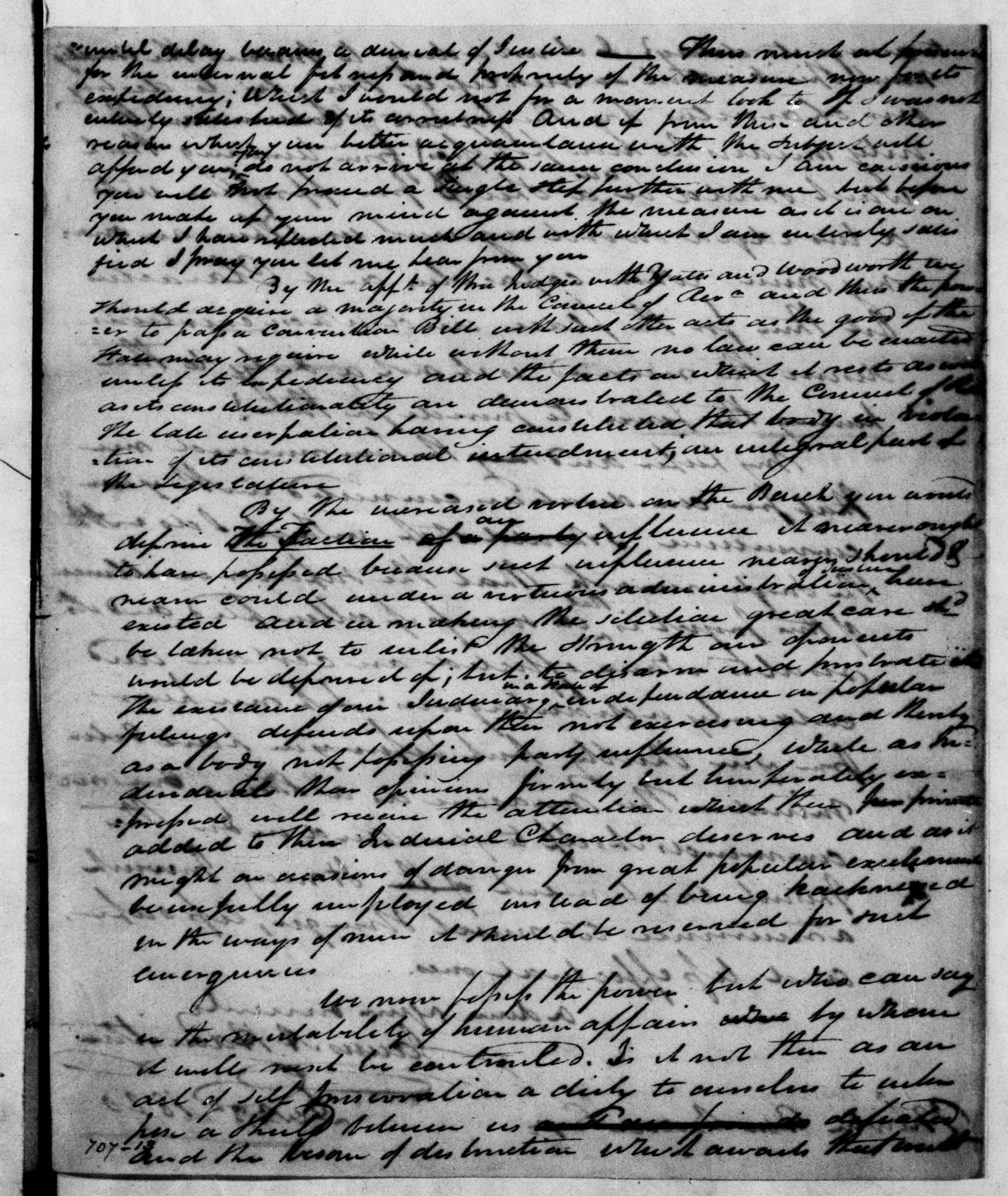 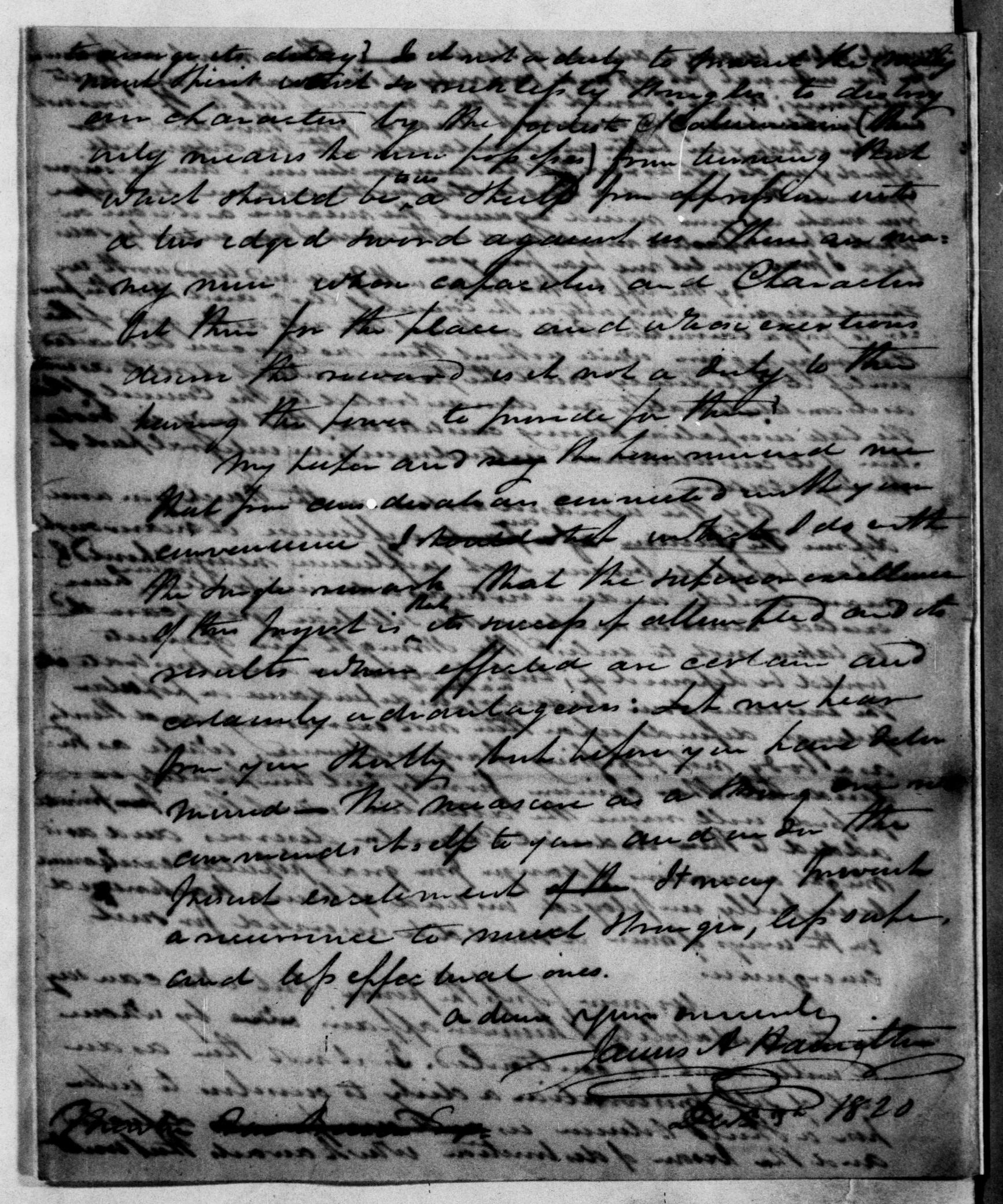 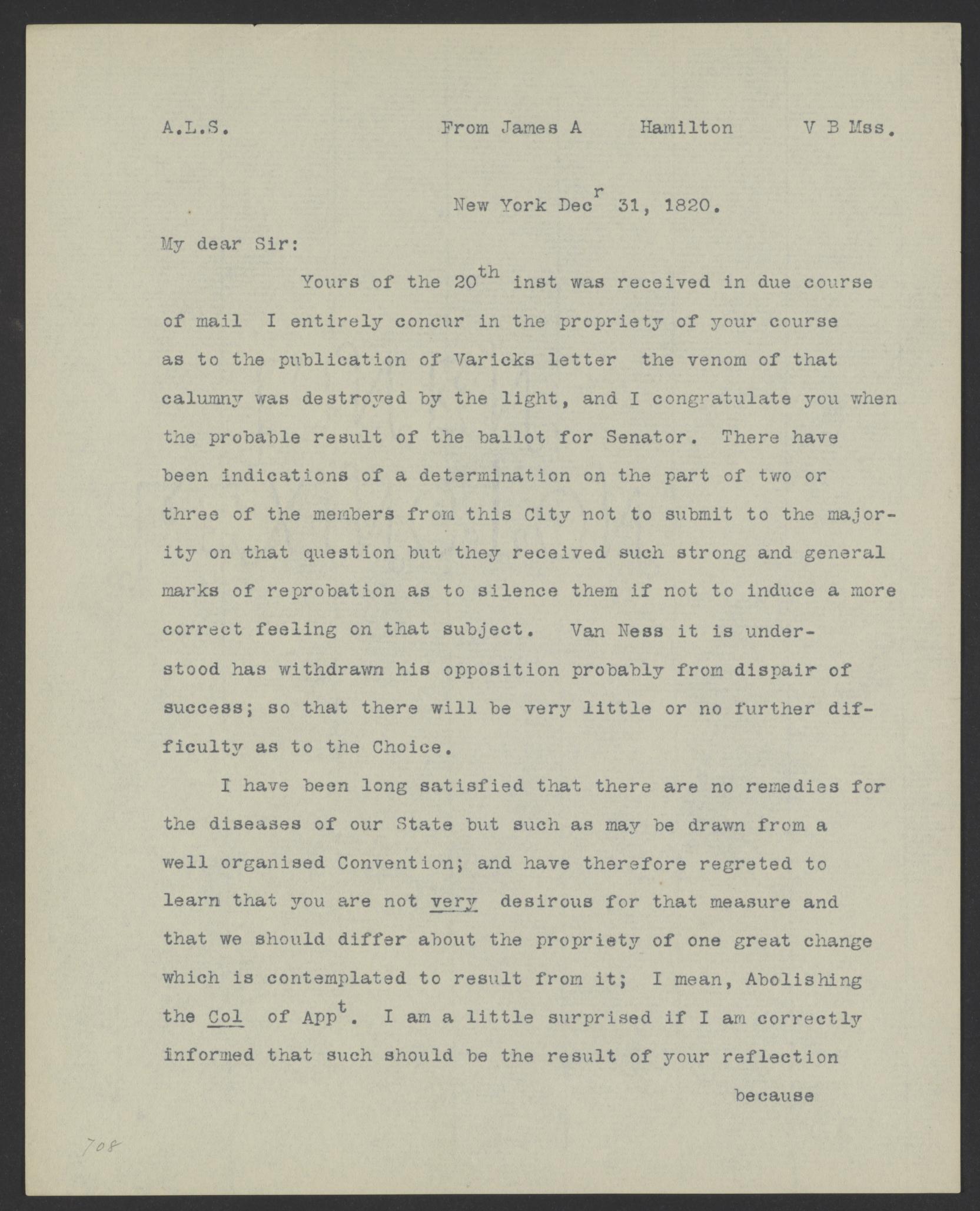 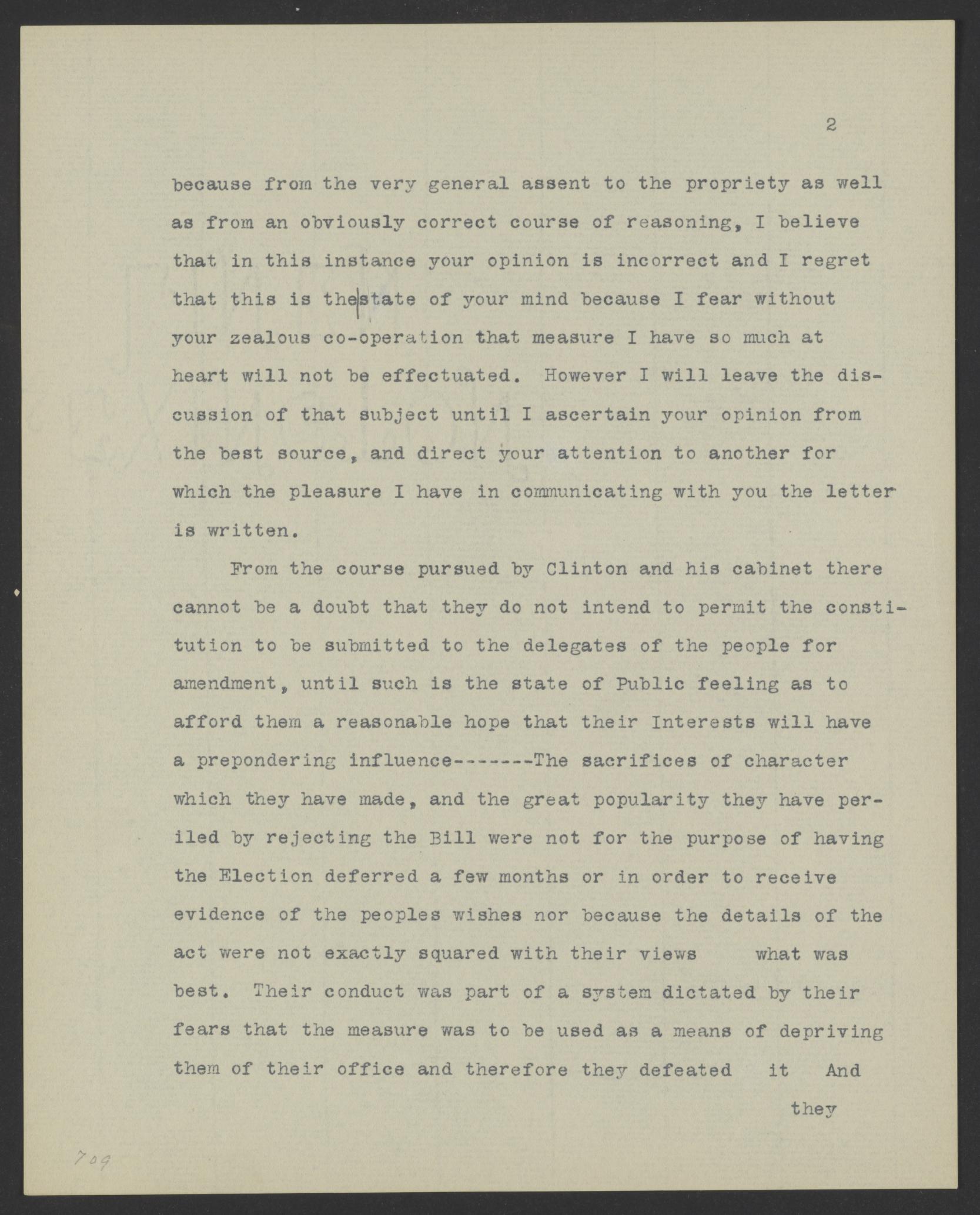 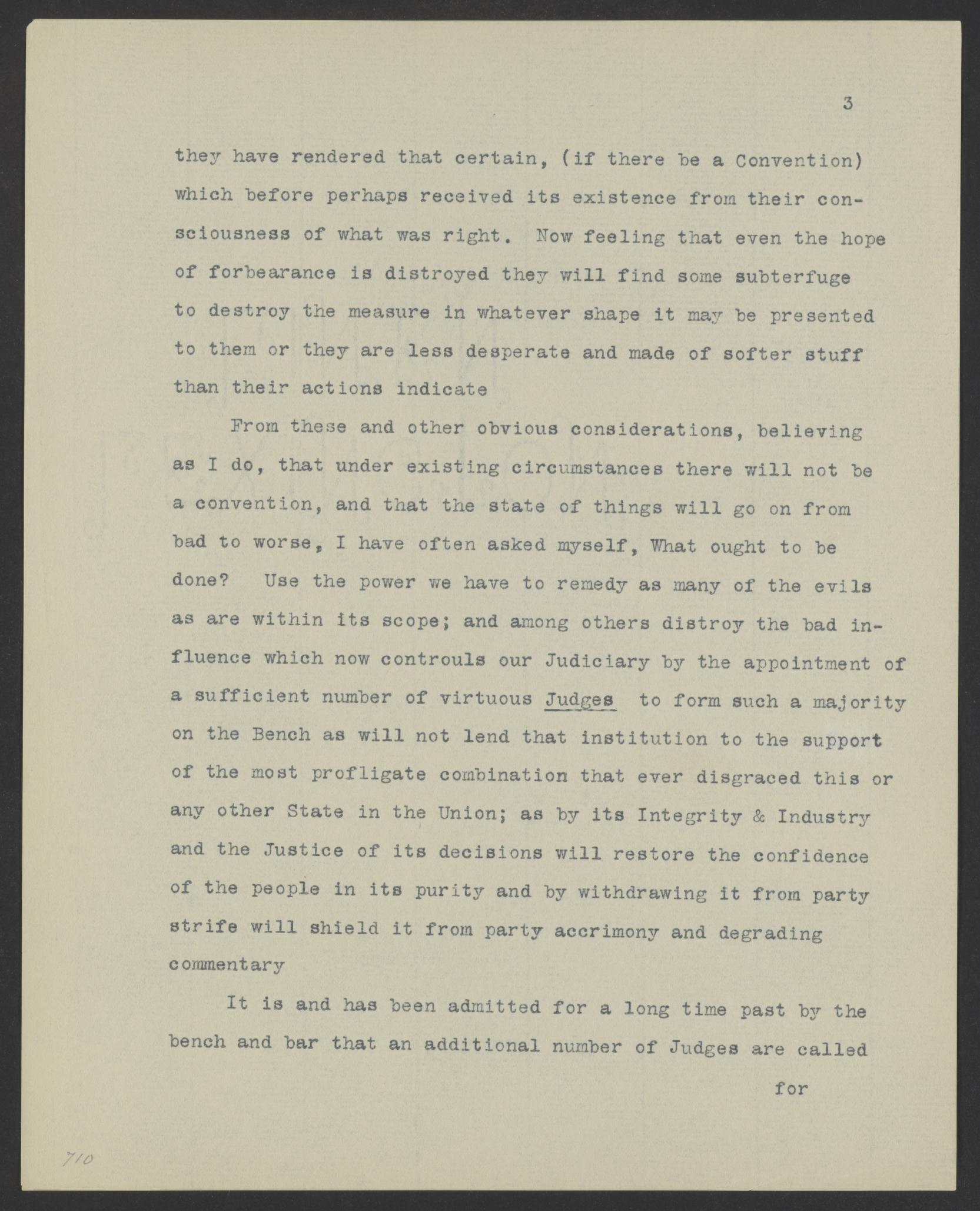 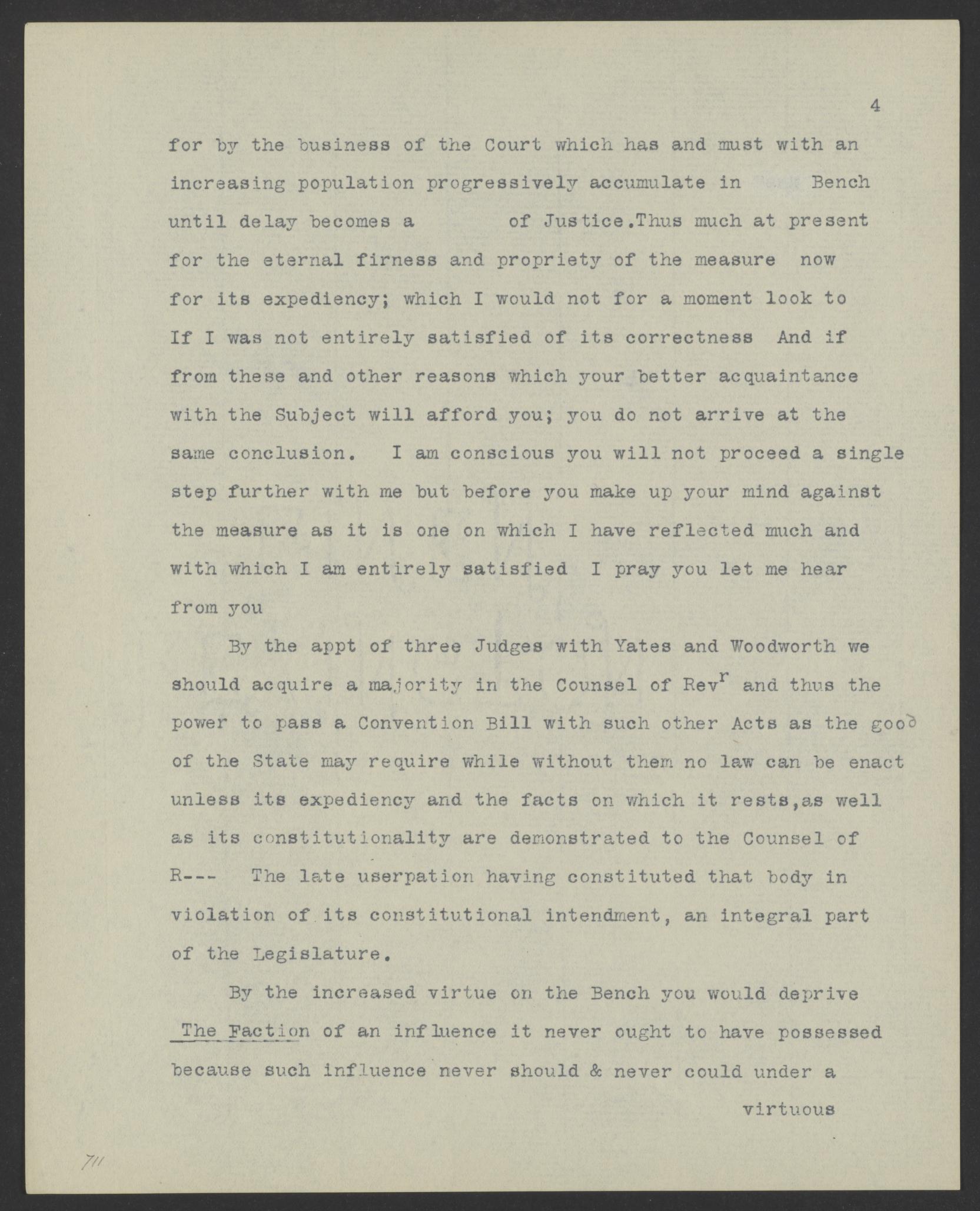 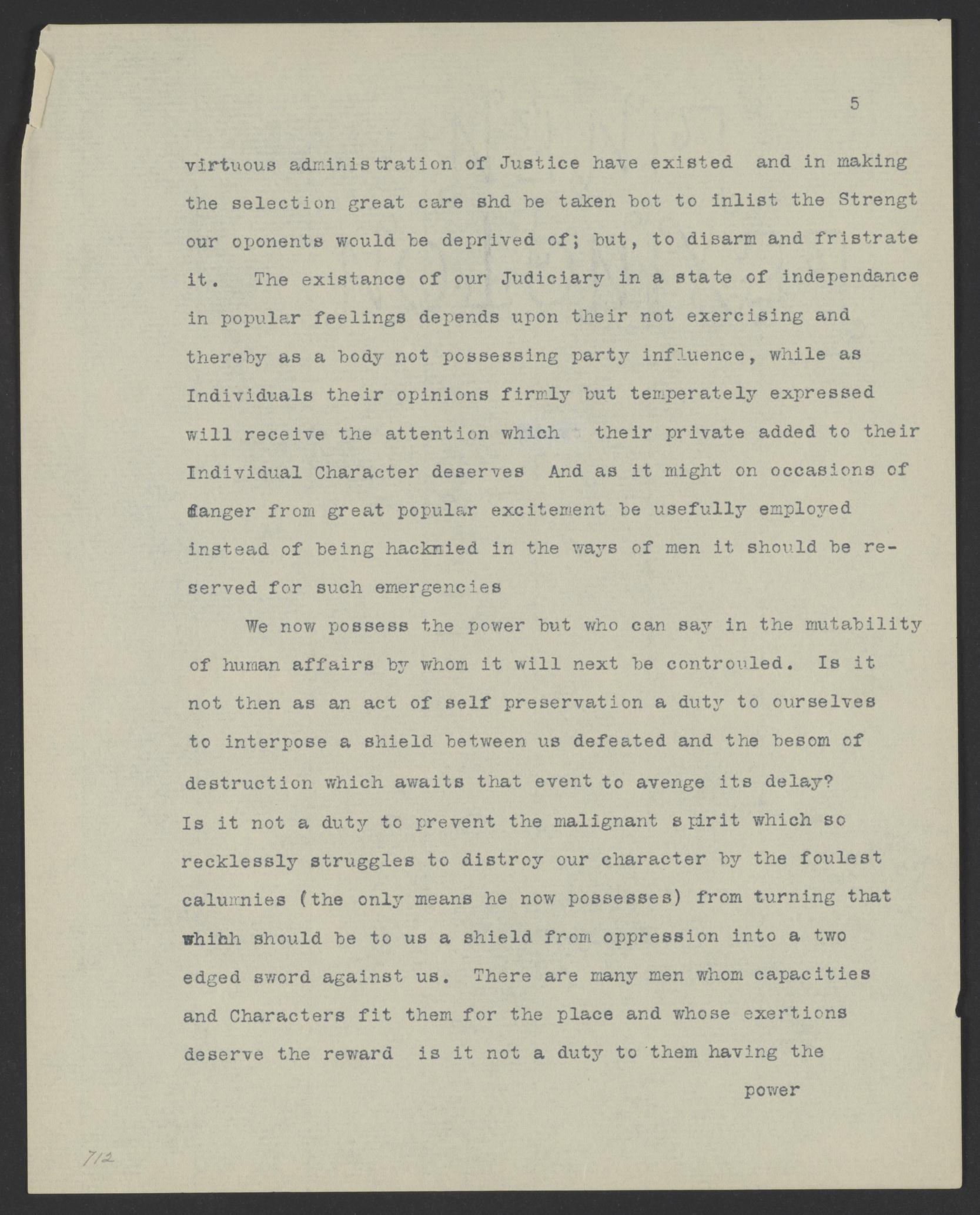 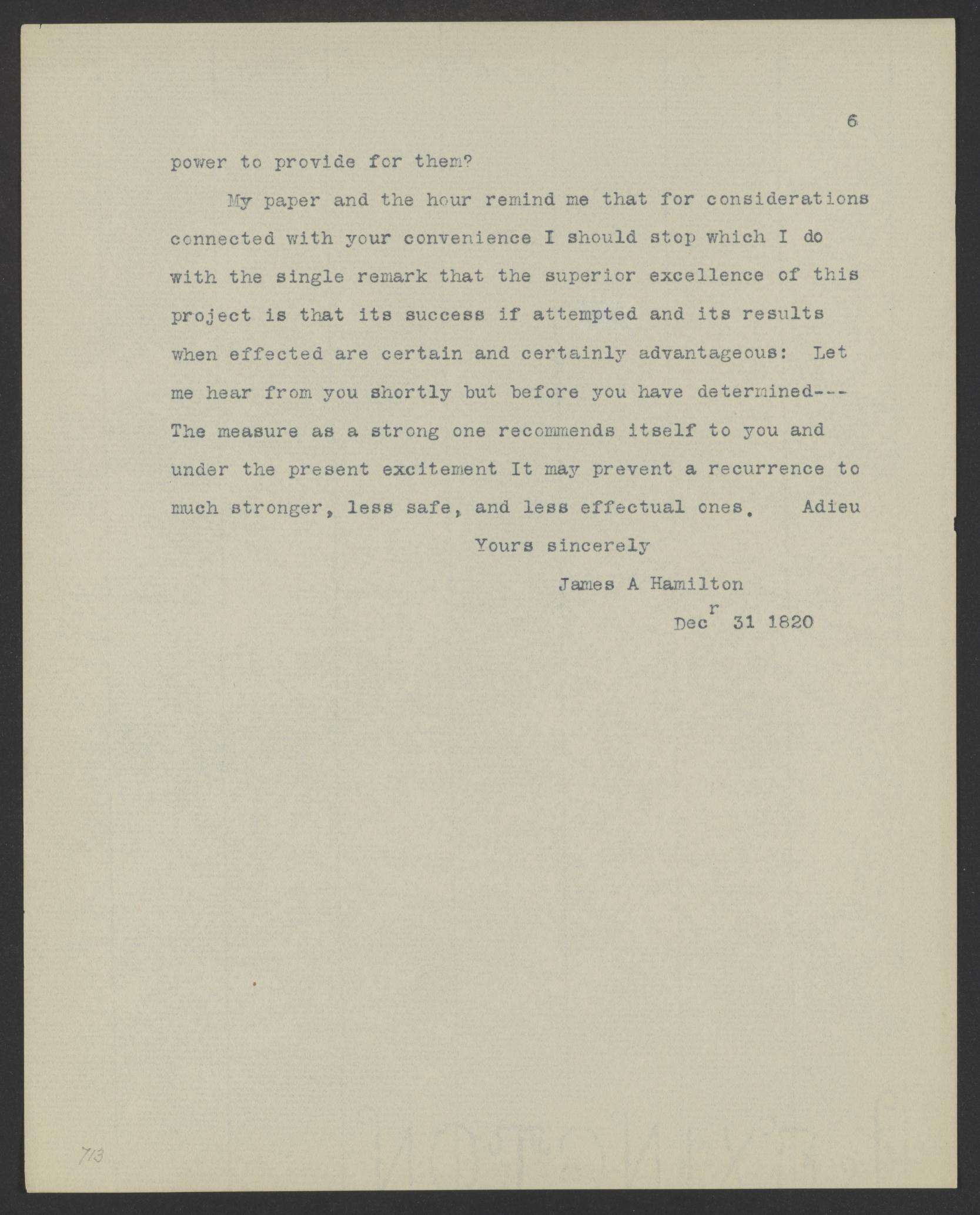