I have recd your letter of the 19th. inst and regret that you should be under the impression that the Letter relative to Post Masters was not properly exhibited by me to the Post Master General.

That letter contains no language which you, considering the grievances complained of, ought to regret. It requests no improper course from the Departt. It speaks warmly of injurious facts.

It is evident that these facts were not known to me and of course that I could not ask the P.M.G. to act accordingly to your wishes without affording him the information it contained. It is impossible to doubt that the P.M.G. acted upon the authority of your letter and accompanying documents He had no other moving considerations.

The Secy of the Navy has lately read your letter and does not perceive in it any material cause for regret on your part at having written it.

Some Clintonian Members of our house have within a few days applied to the P M.G. for a copy of the letter, stating that if it was refused they should move the House to call for it. The P M.G. gave a copy. They were mortified to find the letter so unobjectionable. As the P M G acted upon that letter and as it was impossible for me to have asked him to act without producing it, I cannot discover what reasonable ground of complaint can be alledged against either him or myself.

I send you a copy of the letter. The P M.G. does not think it reasonable to take from him the justification of his conduct & besides as he at least would reserve copies, the possession of the Original must be of no moment.

I regret that you should feel the least uneasiness on this subject, and indeed I rather think you ought to be gratified at your own zealous care to rectify the enormous abuses of official faith which you complaind of—abuses which I believe Secretary Thomson thinks were capable of full proof before a Jury. The Governt has always as you know evinced a delicacy extremely nice in all our local politics. And as MrClinton has long been known as a determined Candidate for the Presidency, it would have perhaps been justifiable on every reasonable ground for the Adminisn. to have placed the official powers ^wholly^ out of his reach.

I am much pleased with the manner in which you treated his last note to your Body. His presumption is astonishing, and argurs in him a contempt which certainly a venerable Senate in this Country could never forgive.

In the contest for Speaker, I constantly voted for Genl Smith, whose long acquaintance with the business of the house, his revolutionary gallantry & uniform republicanism were sufficient for me besides his residence near the middle between the contending North & South.

Taylor will not be able to render Mr. Clinton much Service—his talents are of no weight. It seems to me that MrClinton's rejection of Your convention Bill was an instance in which his usual political discernment deserted him. I trust that we shall reap the benefit of his folly.

P.S. Jonathan Thompson is nominated by the President for the Collectorship of N York. 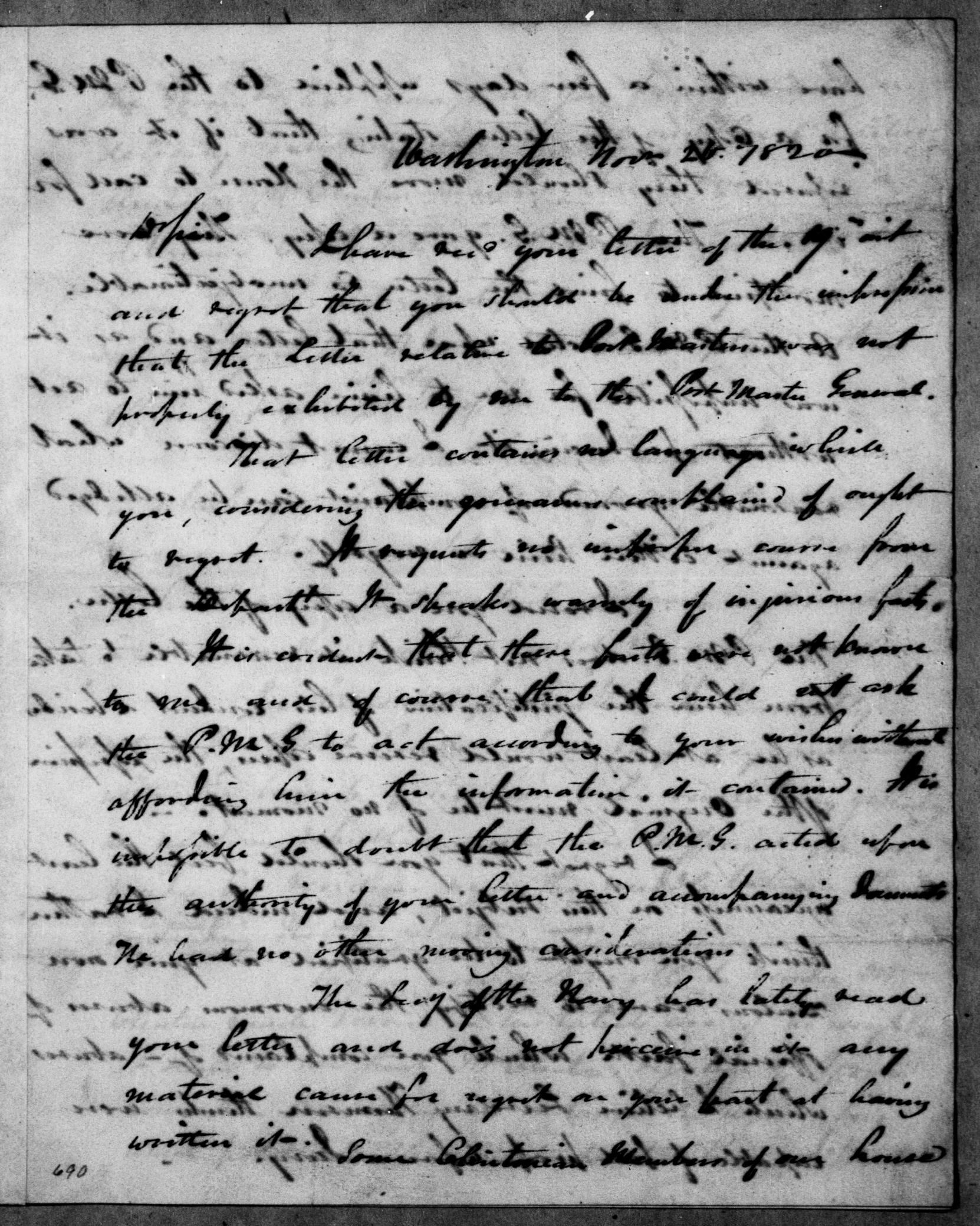 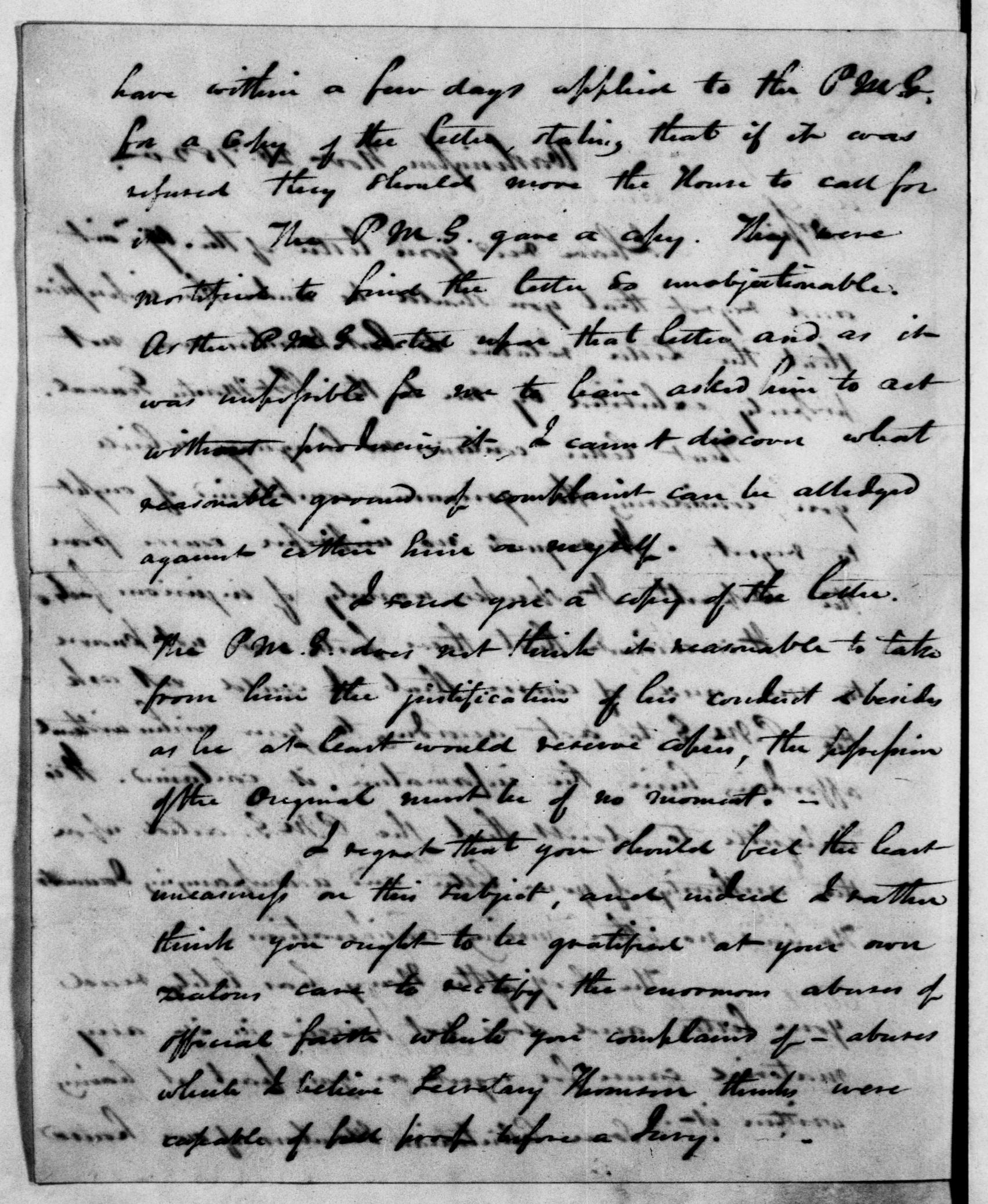 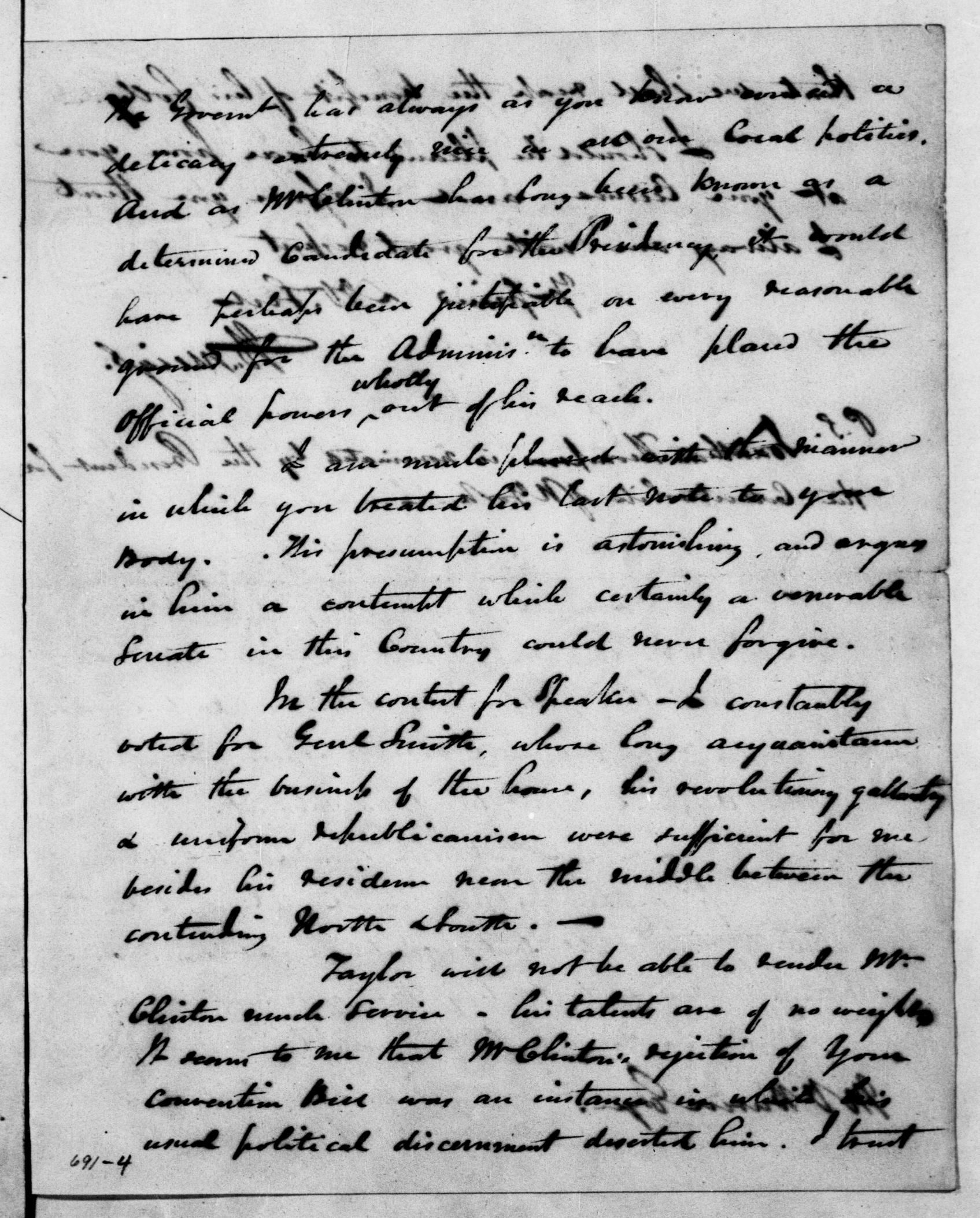 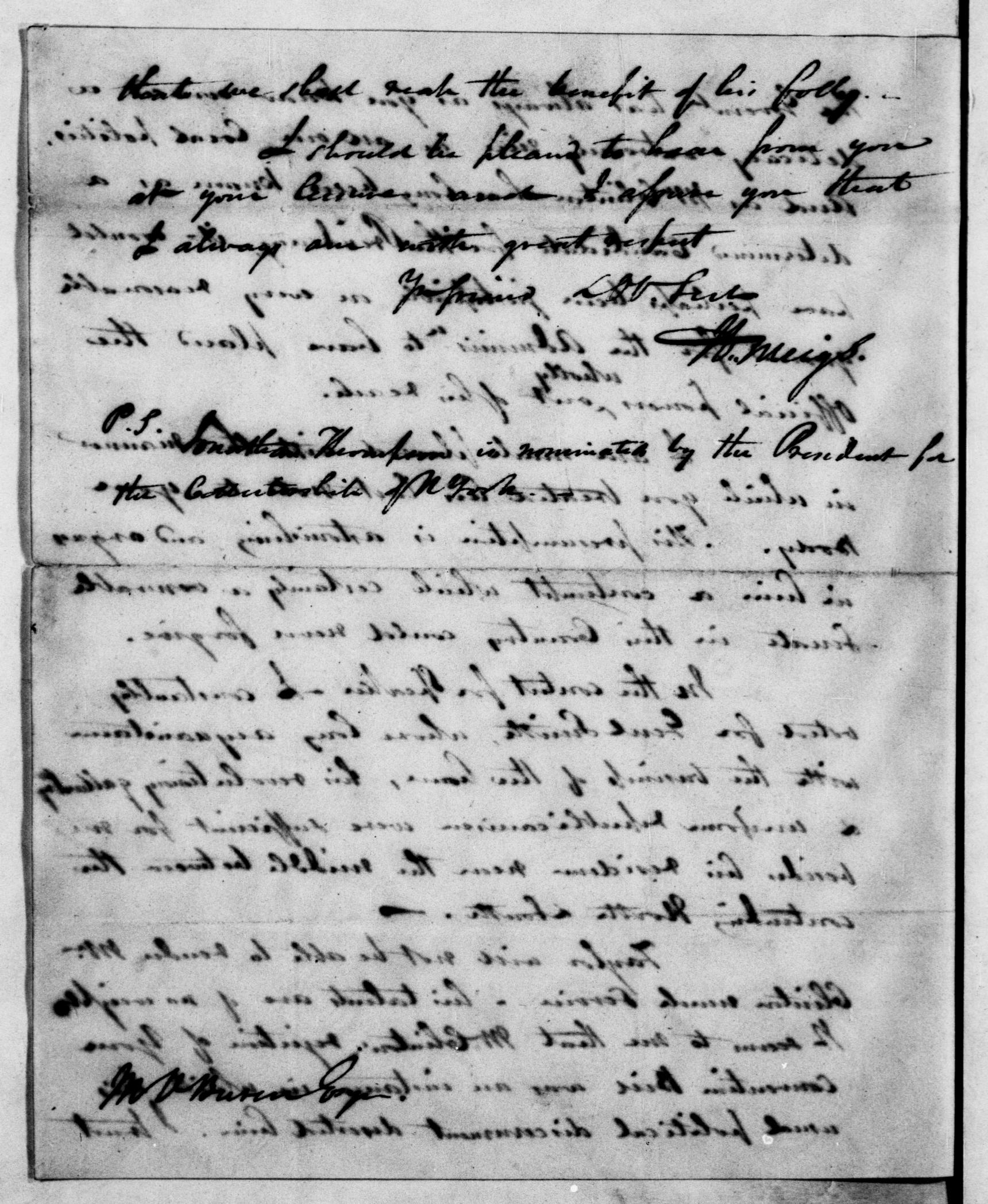 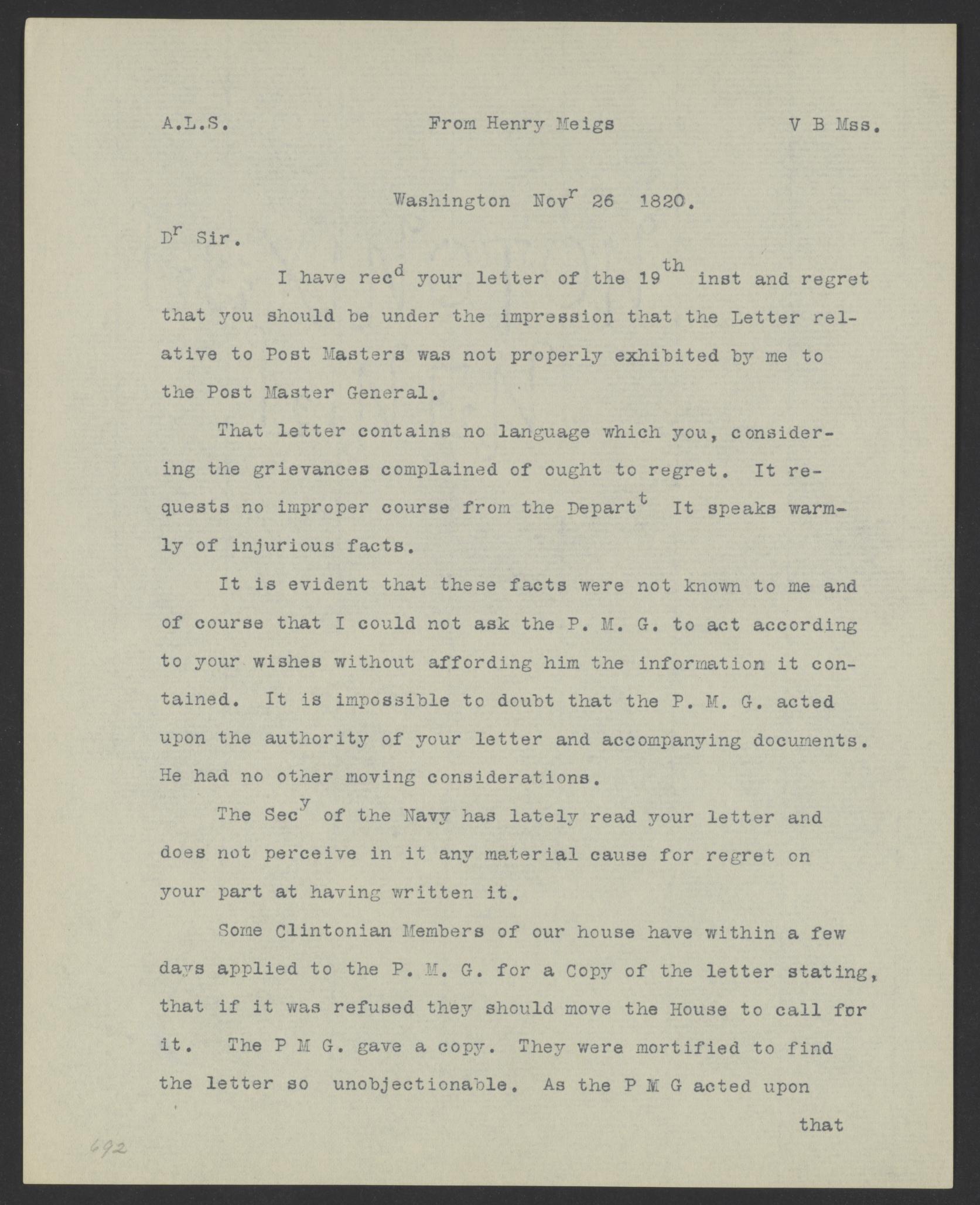 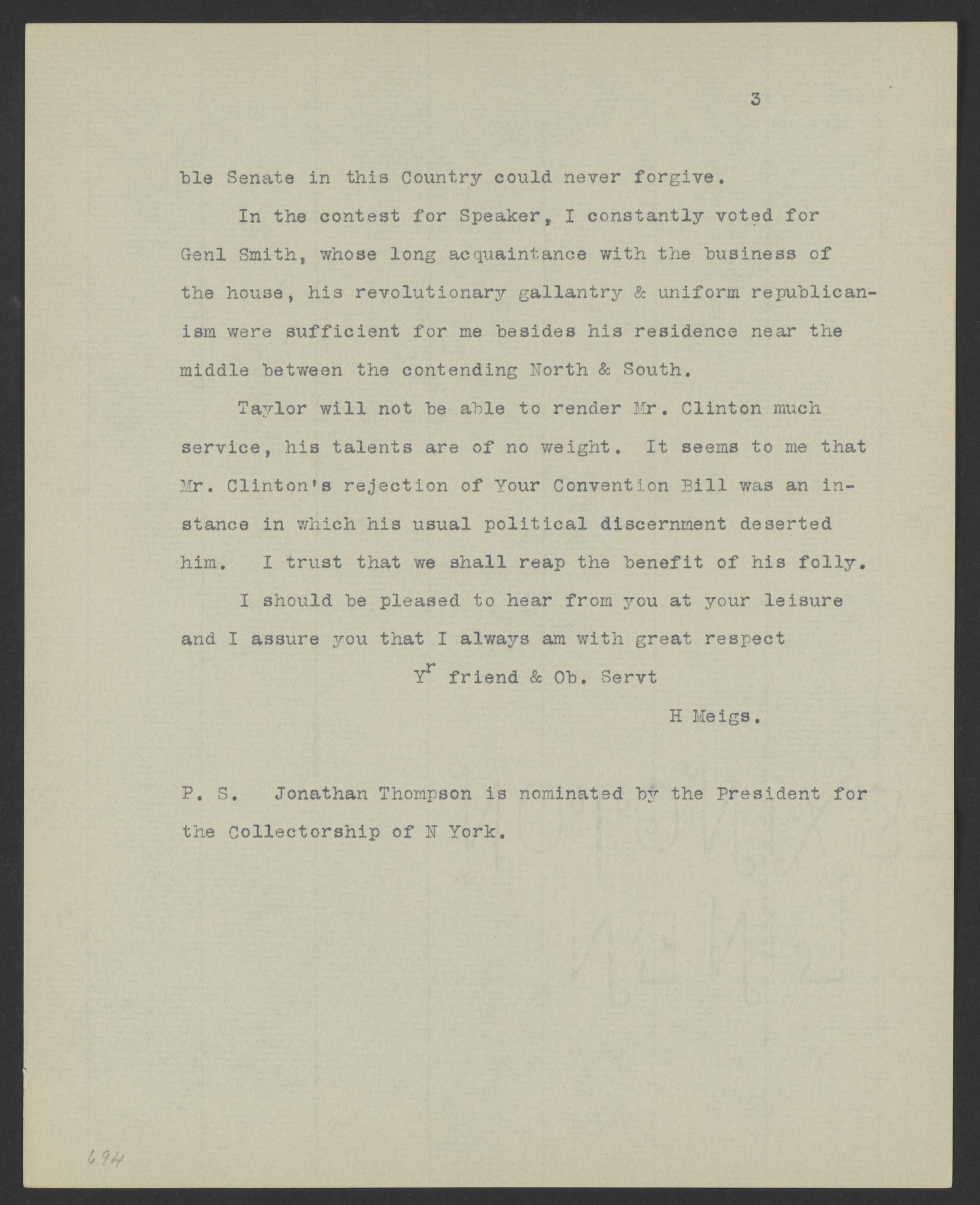