By the time this reaches you, Mr. C’s “short session” will probably have closed, and you be left in the quiet enjoyment of some repose, after the labor and exertion to which you have been subjected in exposing the base practices of a corrupt combination against the Republicanism of the State.

The assembly Report, has injured Clinton essentially with us. The matter, the manner &c so palpably expose the justice that it is perceived and deprecated by all who have not sworn allegiance &c.

Had the election taken place 6 mos. ago, so great was the prejudice existing against the Patriot Tompkins (now vanishing) that he would certainly have fallen short of Clinton in this county at least 300 votes. As it is it is extremely doubtfull how the majority will be either in Steuben or Allegany, our counties here being exterior & remote ones and possibly the last that will be heard from I subjoin any deliberate opinion & assure you that this is more favorable to Clinton than my friends here will admit—viz.

I am dearly of opinion that if Mr. Tompkins comes into the Western Dist: with 1500 majrty. he will be our next governor. I have correspondents in various Western counties & have at different times and very recently received candid opinions, by all there, (if to be relied on & I think they may) I cannot possibly perceive how Clinton is to get 1000 majority in our District.

Nay indeed if the Change of opinion, produced by the Report of the Senate, should go on, I solemnly declare that it will be difficulty for C to get a majority at all.

This document has done infinite good in removing the doubts of many well intending men. We have reprinted it & caused it to be distributed in every possible direction. The dispassionate manner in which the subject is treated, the result of the arithmetical calculation, but above all the Body from whence it emanated, give to it a character, ben highly favorable to the cause of truth, virtue and principle.

The Good accounts brought by Genl McClure have had a propitious effect. He was much pleased with his reception at Albany. Of the Hon. M.V.B. particularly, he speaks in the most grateful, respectful & admiring terms.

The Genl. is politically correct, was always, and is now warmly so.

From his own account however entre nous, he must have angled with both parties after his law. One instance he gives me (but this in confidence) one morng. Mr. Speaker <illegible>. in a very authoritative manner asked him who was going to support his bill. The Genl. replied the Speaker. The latter replied sternly, “do not depend upon that Sir. I understand you have given some symptoms of bucktailism,” [. . .]  mem: he had previously warmly espoused his application. [“] A sad fellow” this Spencer Jr. I fear.

Now Sir for a little business. A writ was served retble. may term, Ambrose Spencer vs Erastus Shepard (our printer) and William B. Rochester. Will you give notice of retainer for us? I disclaim any knowledge of the piece supposed libellous till it was in print. Have no interest in the press except political and although I have written for it a good deal, have never exercised any than an advisory controul. I should like to remove the venue to Steuben if laid elsewhere & if possible but of this hereafter, you will decide whether it is not best to plead separately or jointly. I have not been able to ascertain myself which would be most proper. 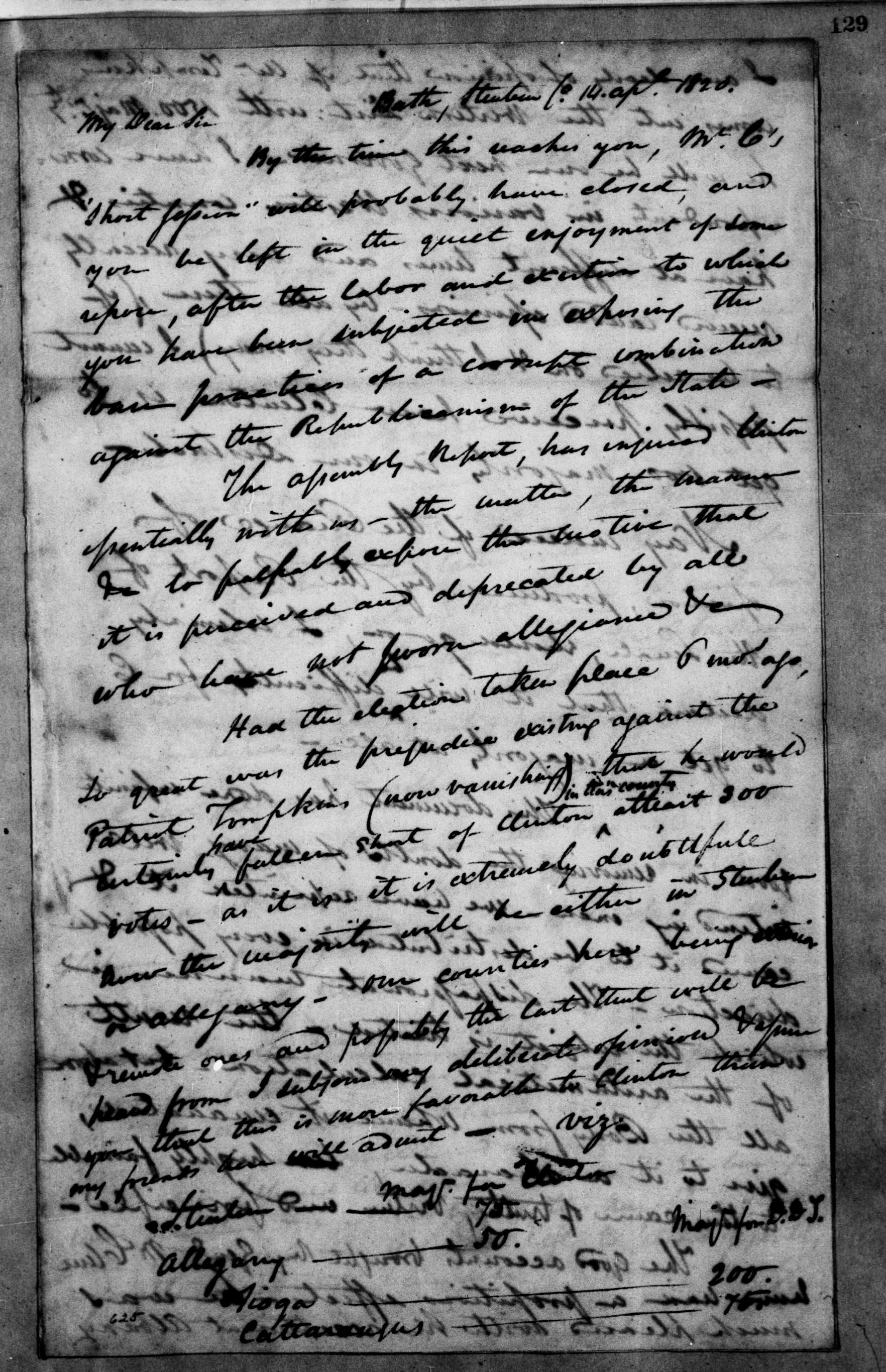 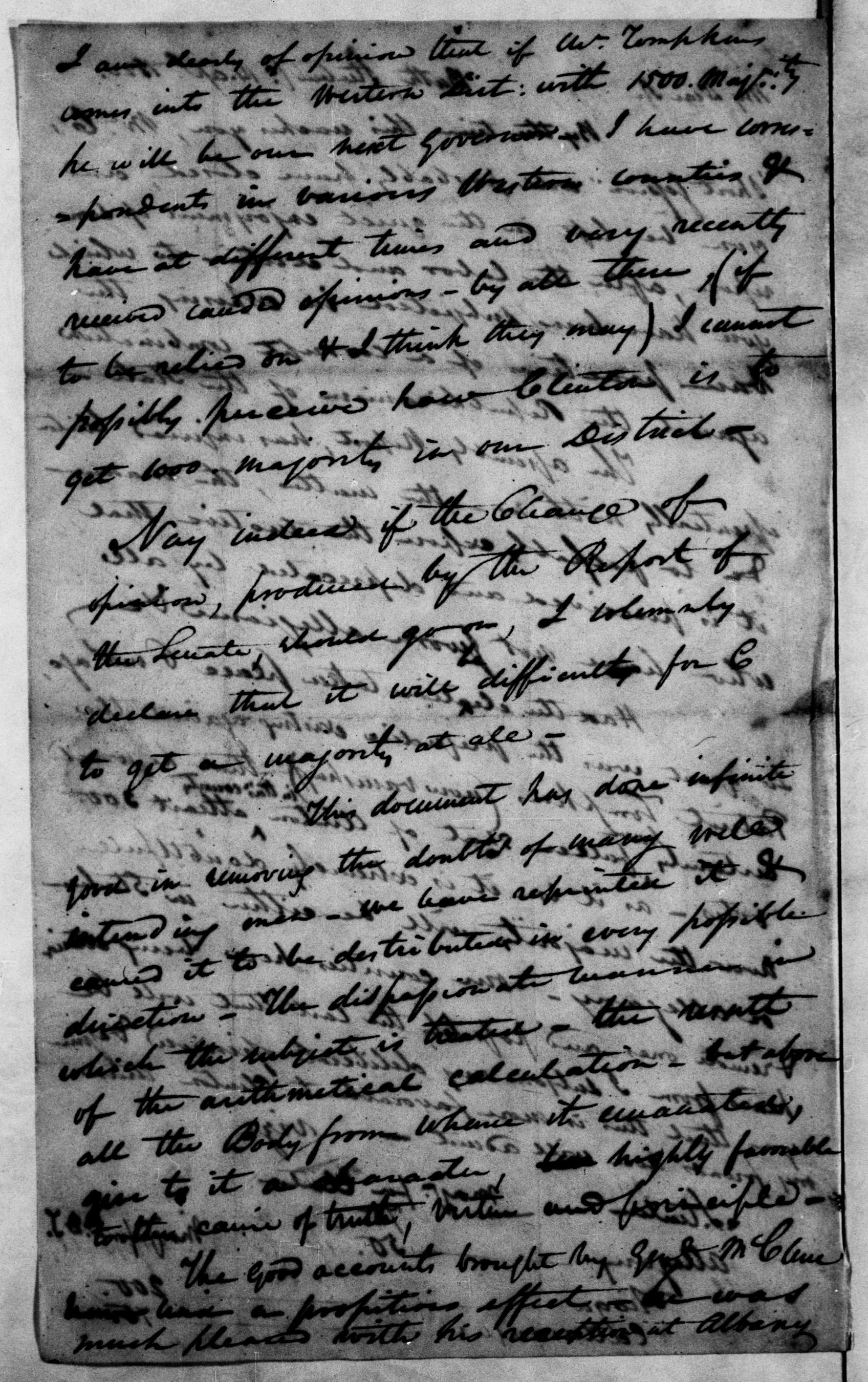 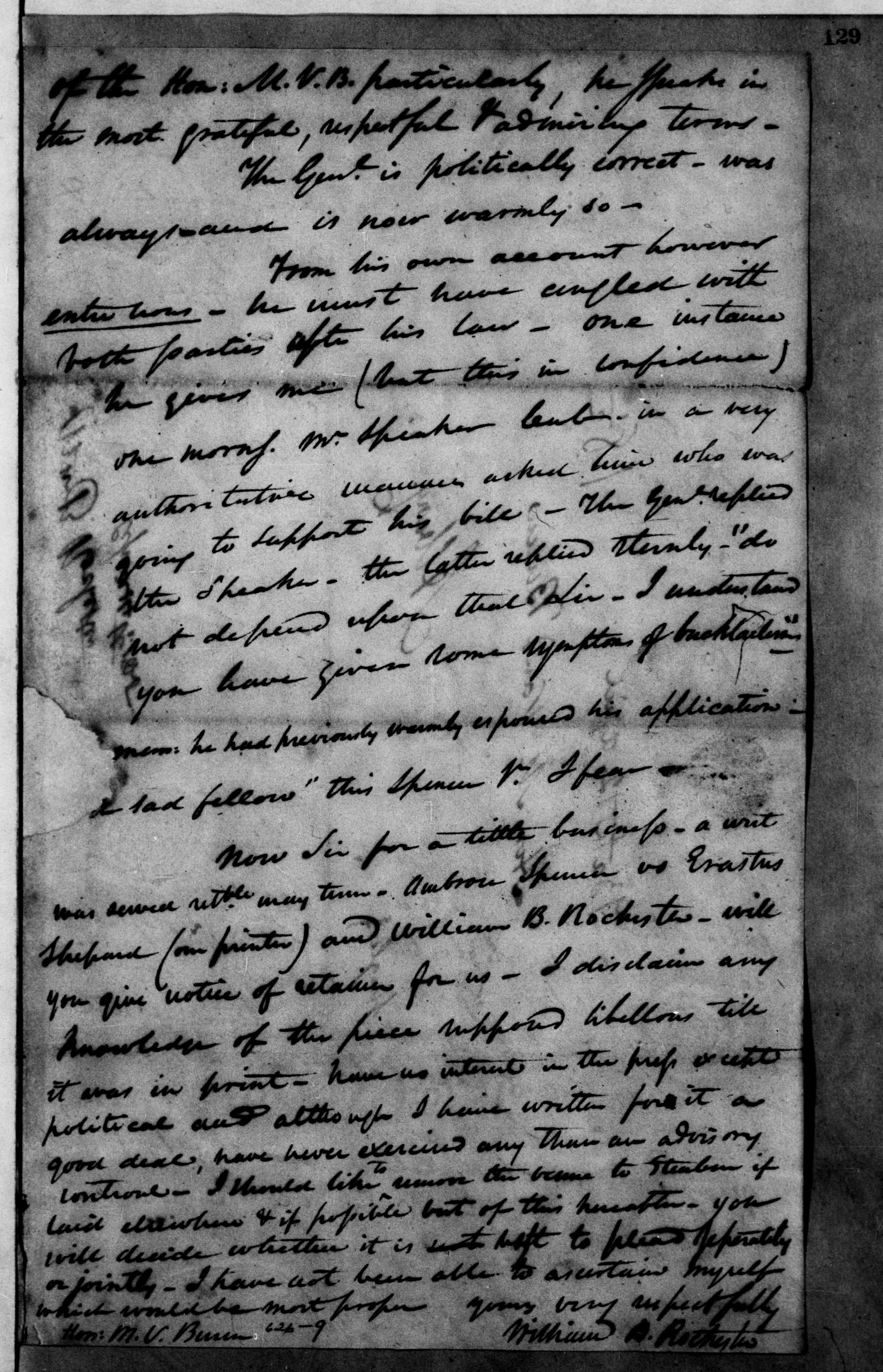 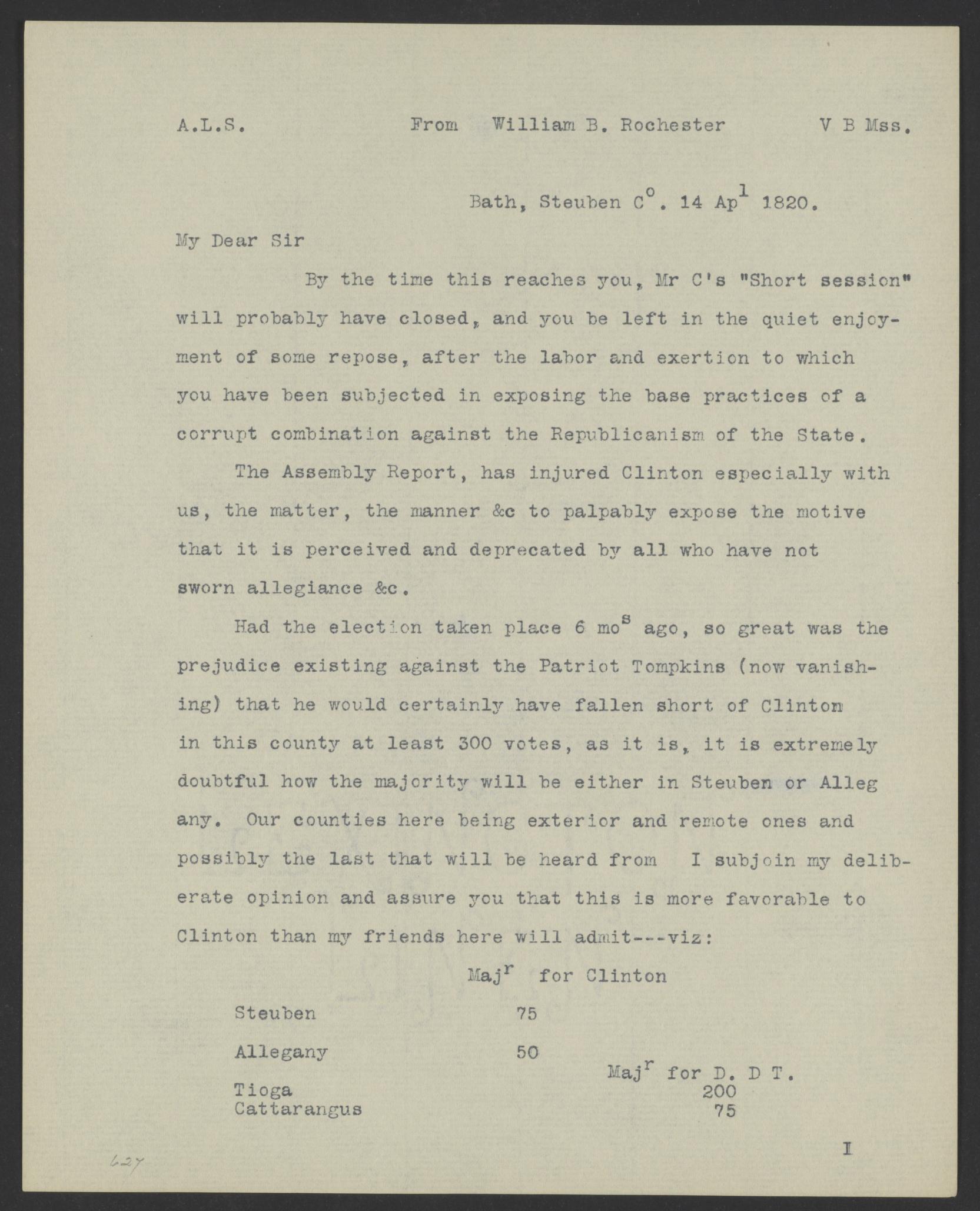 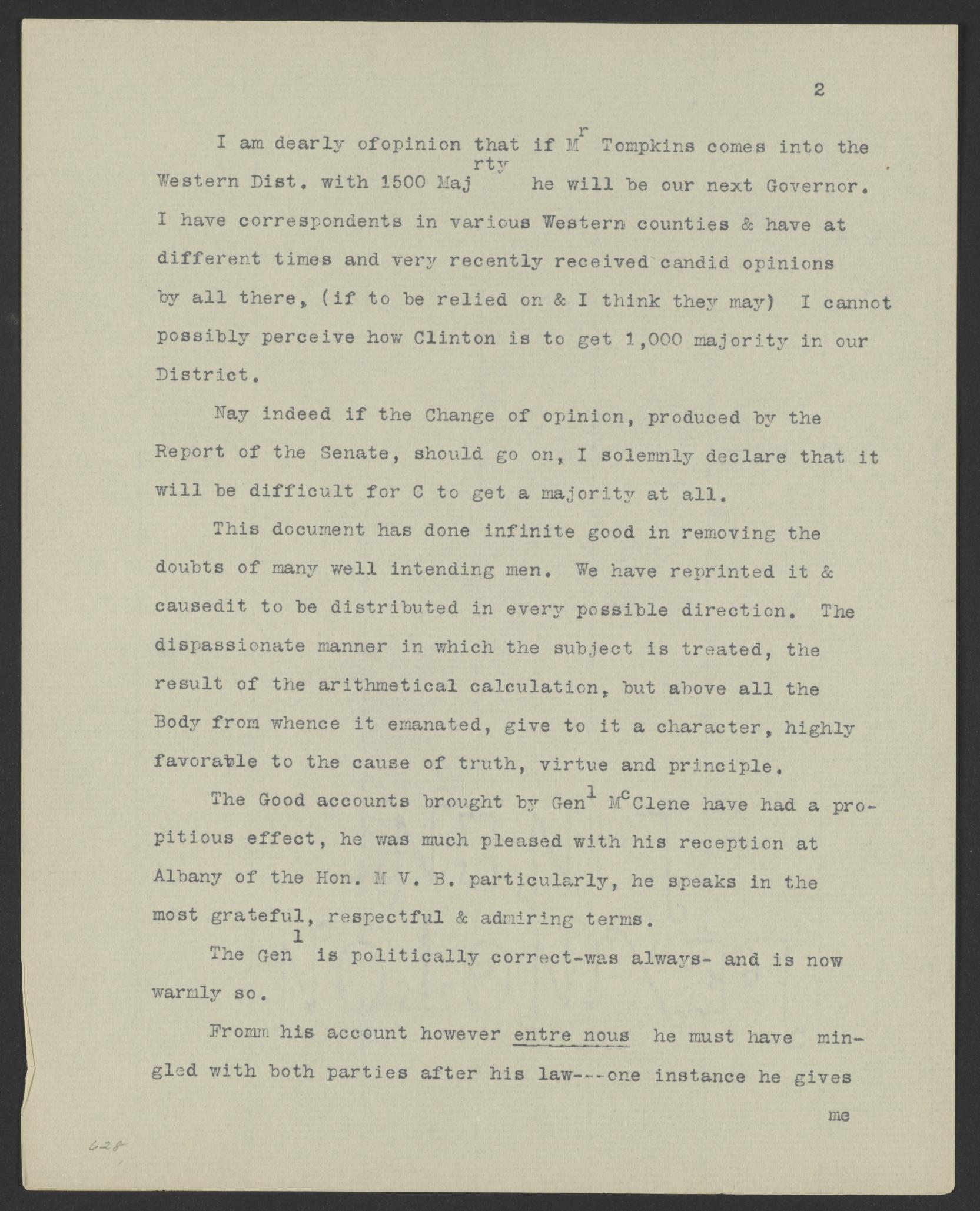 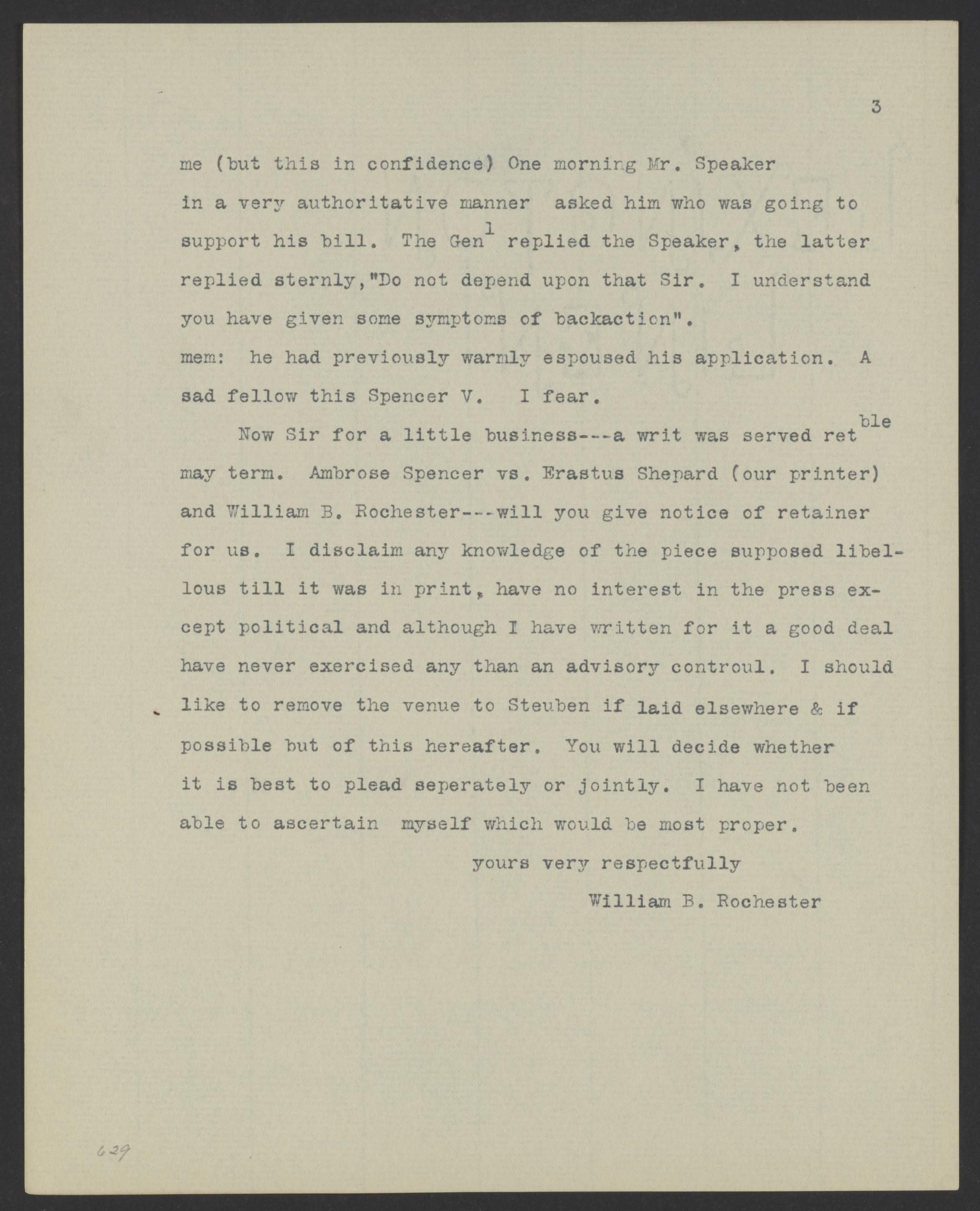