Your obliging letter of the 2d instant, came to hand on the 7th.: I read it with great satisfaction; truely, it is a time for the old Patriots, to come forward in defence of the good old cause of republicanism. I should have pressed a general meeting, of the true republicans; but our republican county convention, was so nigh to wit, on the 15th inst, concluded it would not be best. I declined being a deligate, to the convention, on account of my friends in the town, was so zelous, to have me forward, that they put me in supervisor of the town, and of course, one of the inspectors of the election: and I thought it rather endileceate, for an inspector, to engage much in electionereing meetings: I cannot say, but I carried my delicacyi to far, my friends, have been some what disappointed in my declining, but I hope it will not be injurious to the cause:

I have just heard, that the Vice President’s accounts are settled: and that he is a credebtor to the state, of from ten, to twelve thousand dollars; I hope it is true.

I believe there is a wicked combination, against the Vice President, to distroy him, as good a man as ever presided over this state; that the comptroller,  is but a mere puppet in the business, that there is two at least, puppetworkers, behind the curtain; but I hope, and feael but little fear, but all their machinations, will fail; truth will work its way out. Several of my friends, have hinted a desire to me to consent to a nomination for Assembly; but I tell them, I am too old, being in my 73d. year it will push me too far into the political Whirlwind.

Sir there is one thing I wish you to explain to me respecting our school fund I fear they are gurdling it, the Legislature, in the year 1819, passed a law authoriszing the board of Supervisors, by a resolution, to order the Commissioners of Loans, & Loan officers, that if any of the moneys loans should be paid in to their hands, note to reloan it, but to pay it into the treasury, altho, as I have been informed previous to this had ordered the old school fund, into the treasury, for common uses, and made a new school fund,s, out of the loans of 1792 & 1808, and some other items; but whether the new is, or evern will be, equal to the old or not, I cannot say. I wish you to enquiriure into this business, and inform me of the result.

With respect and esteem, I am your 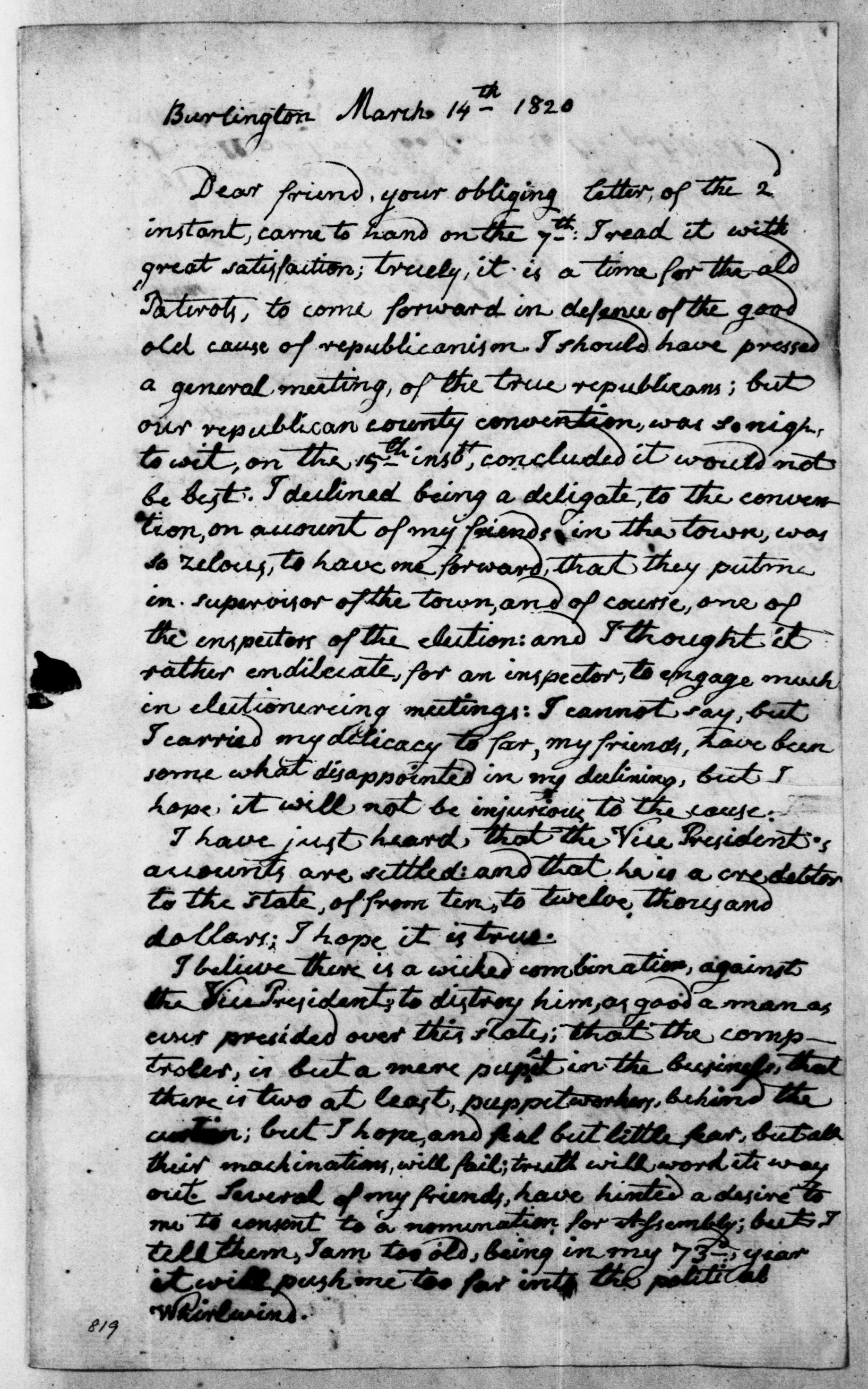 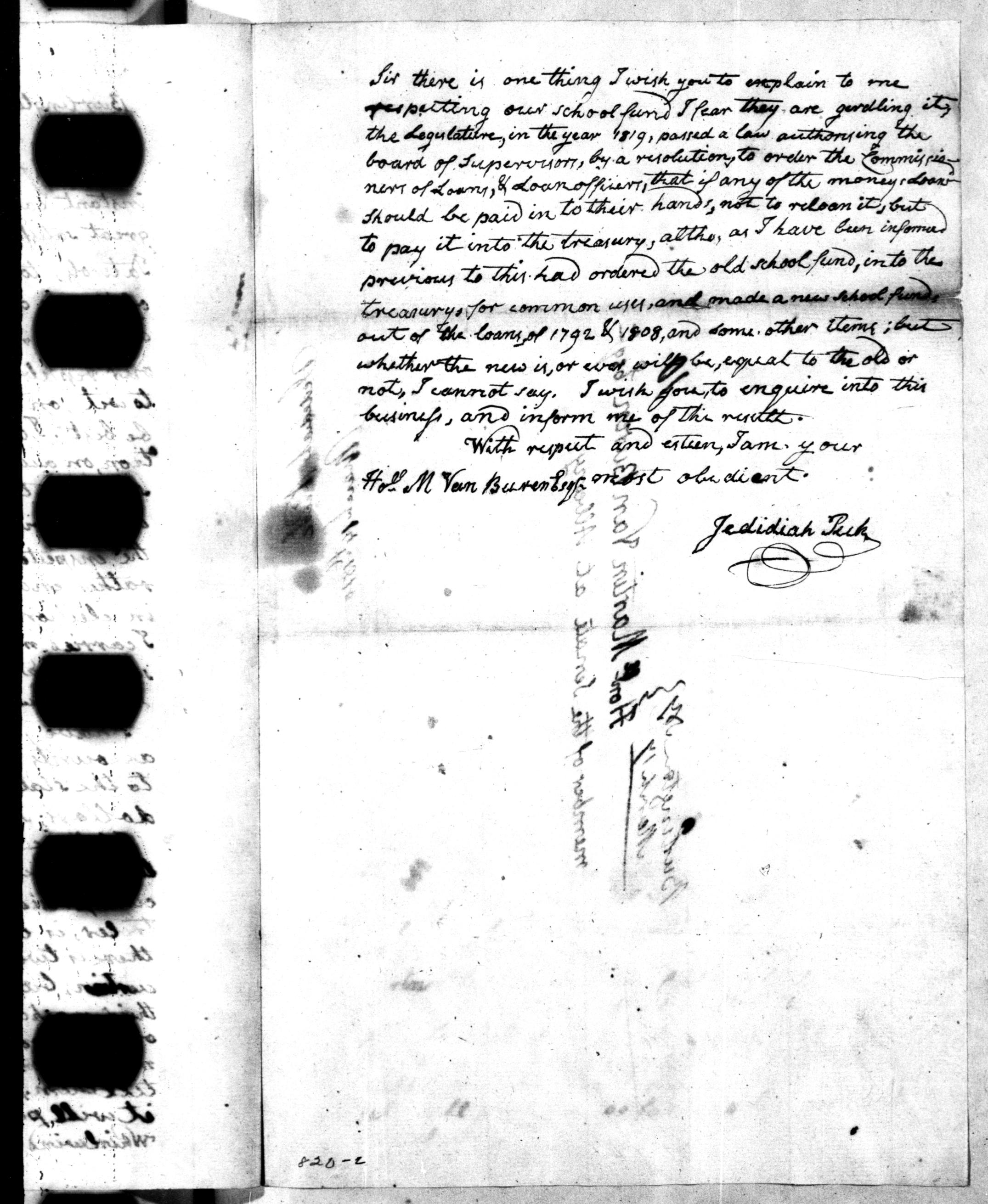 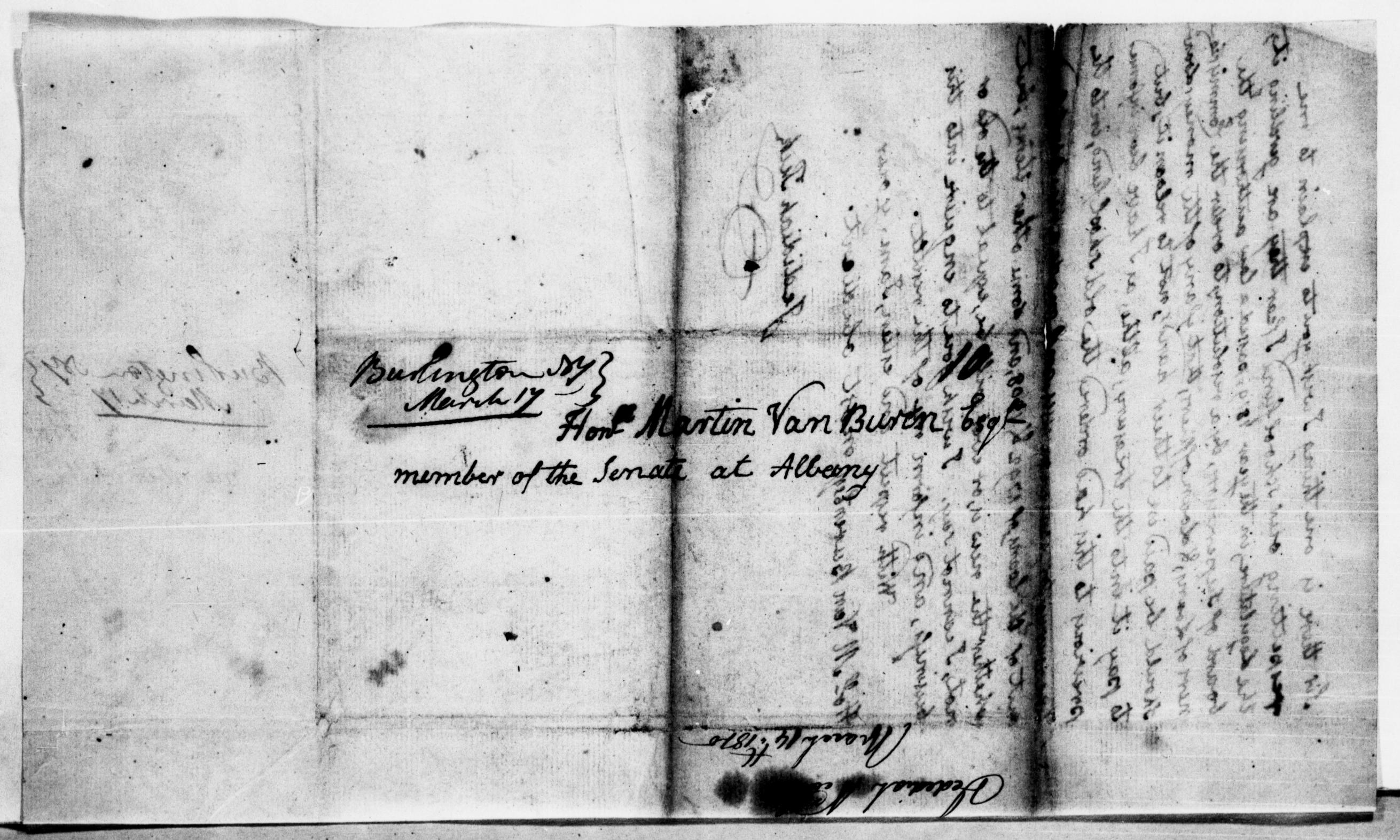 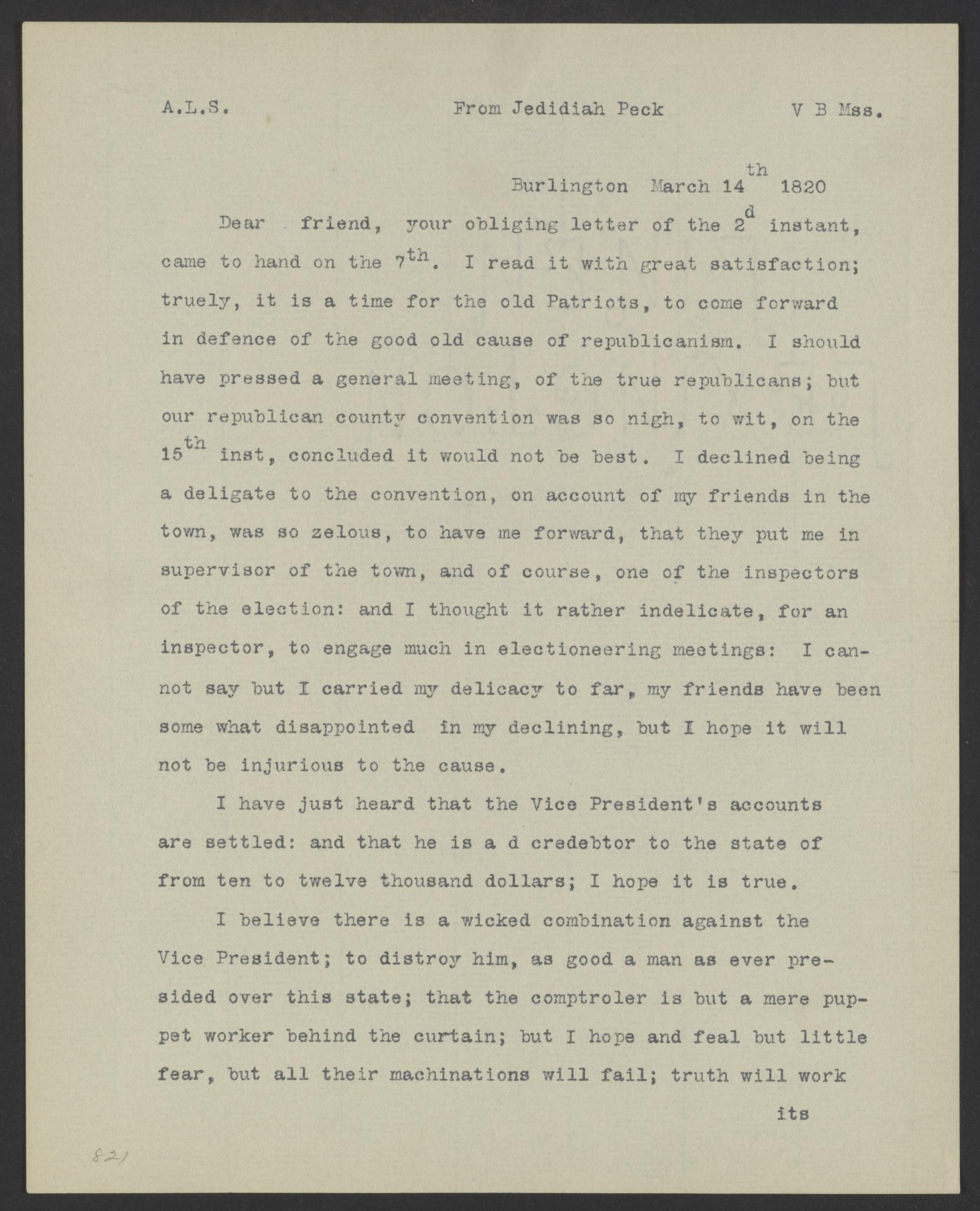 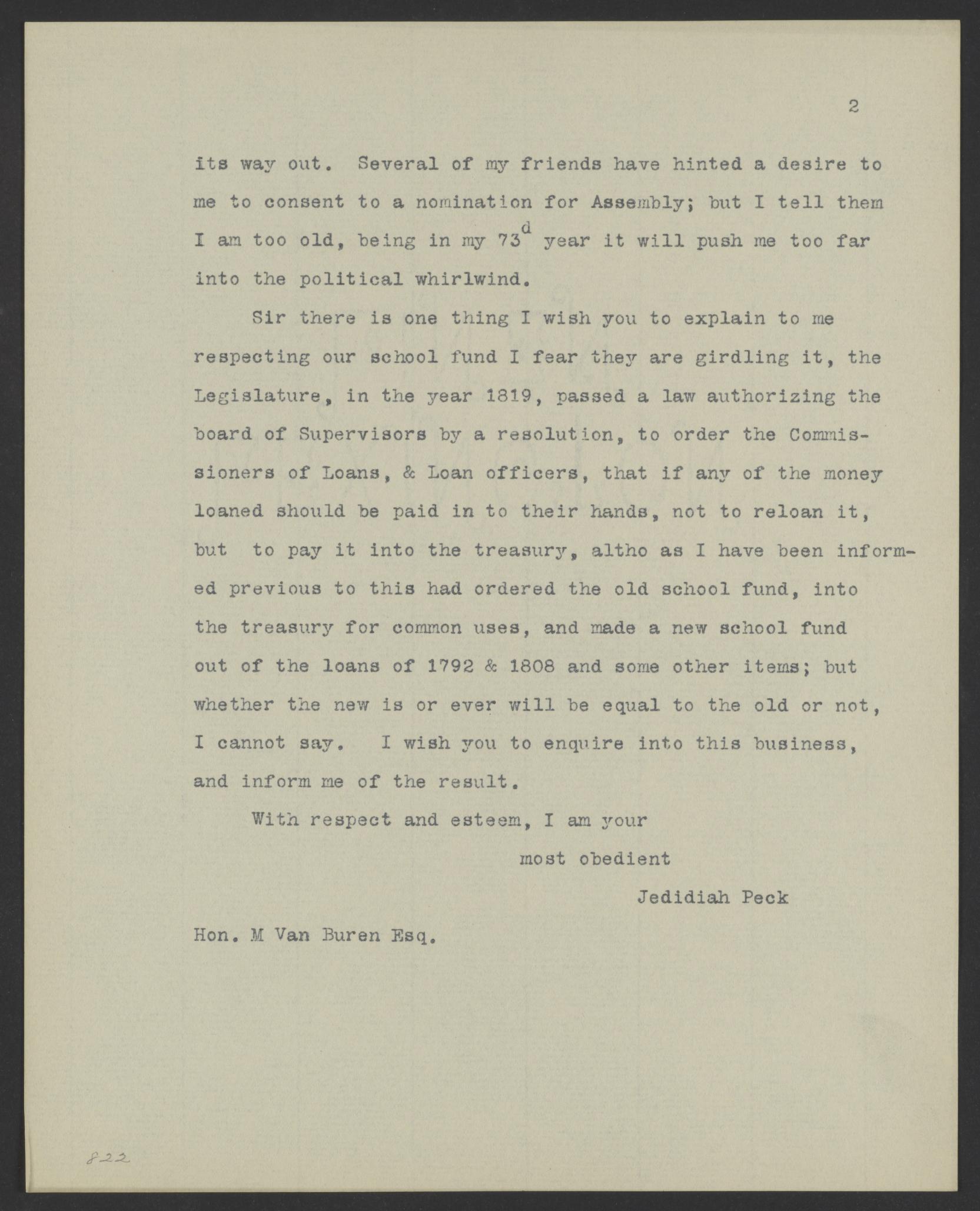