Shortly before I left New York I received your letter of the 30th ult, but being very much engaged in preparing to come here had not time to acknowledge it. You have doubtless seen through the public papers that Mr Skinner has been appointed the Judge and Sutherland the District Attorney. This was done before I arrived here, and I can of course give you no more information on the subject than when I last saw you. I have said nothing to the President about it. I hope our Friend the Col. will bear it like a philosopher. Congress meets tomorrow. The members are pretty generally here and will no doubt make a house the first day. There have been some flying reports that an opposition would be made to the election of Mr Clay as Speaker, but I hope and trust it will be abandoned. It would be a very unwise and impolitic course at present. I am persuaded he does not feel the hostility to the administration, that he did some short time since, and he is very far from being a Clintonian. Col Pell has been here to examine the Vice Presidents accounts to see if something could not be found to make up an answer to his Book. He went off however very suddenly and unexpectedly. He had rather a singular conversation with Mr Crawford, in which I believe he got very well satisfyed that Mr C. would not bind himself to promote the views of Clinton, Spencer & Co. This I will mention to you when I meet you. I am a little apprehensive that Congress will have a warm if not an angry Session. There are many questions upon which a difference of opinion will no doubt exist, and which are calculated to excite some degree of warmth. The Spanish Treaty—The Missouri question—Internal improvements—Bankrupt law—Domestic manufactures, &c. are among the most important. We shall however keep an anxious look towards New York. I hope this is the last struggle we are to have. The prospect is certainly flattering. The only question that I perceive will embarass you, is that of the Senator. I should infer from some articles in the Columbian within a few days that the Clintonians intend to support Mr King I have full reliance on your prudence and management on this question. The Vice President has not yet arrived here, but is daily expected. If any think grows out of Col. Pells mission let me know it, and whatever I can do here shall be attended to promptly. My Dear friend if you have any suspicion that any persons whatever are endeavoring in any manner to excite in me prejudice or any unfavorable opinion towards you, you are most assuredly under a great mistake. Such attempts were made some years since but by men with whom I hold no communion at this day. And I should do great injustice to the Gentleman you name did I not declare that you are labouring under a most unfounded suspicion as to him. We may have amongst us men, and very probably some of my friends and associates who are jealous of your growing popularity and importance in the State. But they too well know my opinion of and friendship for you to manifest any such feelings with a view to change my opinion. I think I know you as well as they or any body else, and I can with utmost sincerity declare that my regard for and good opinion of you grows apon the more intimate knowledge I have of you. I cannot conceive to what you allude in your letter but am firmly persuaded your apprehensions are groundless. I hope the first time we meet you will not fail to give me a more full explanation. You must not fail to communicate freely and often what is taking place at albany this winter, provided it does not interfere too much with more important concerns.

I am very Sincerely your 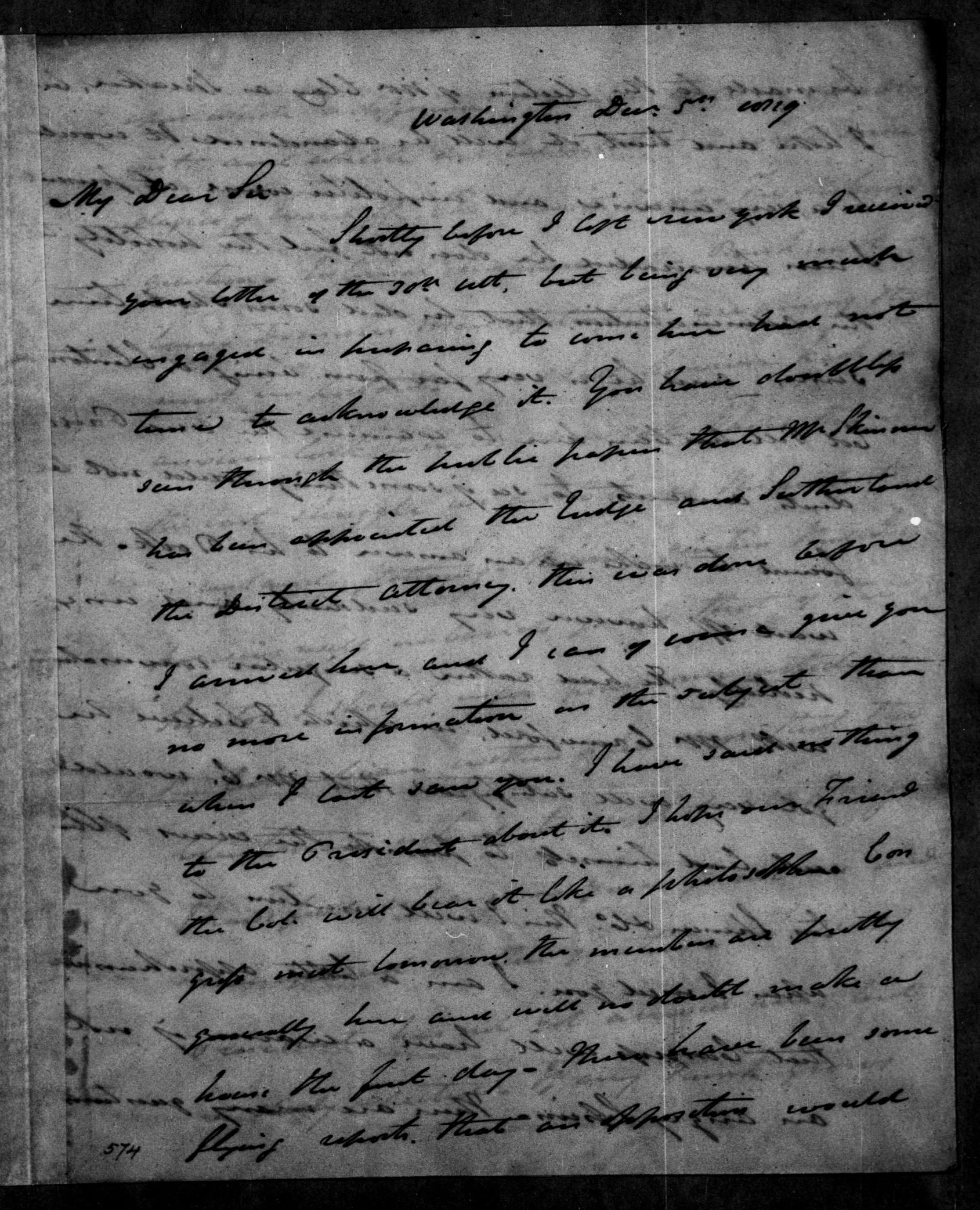 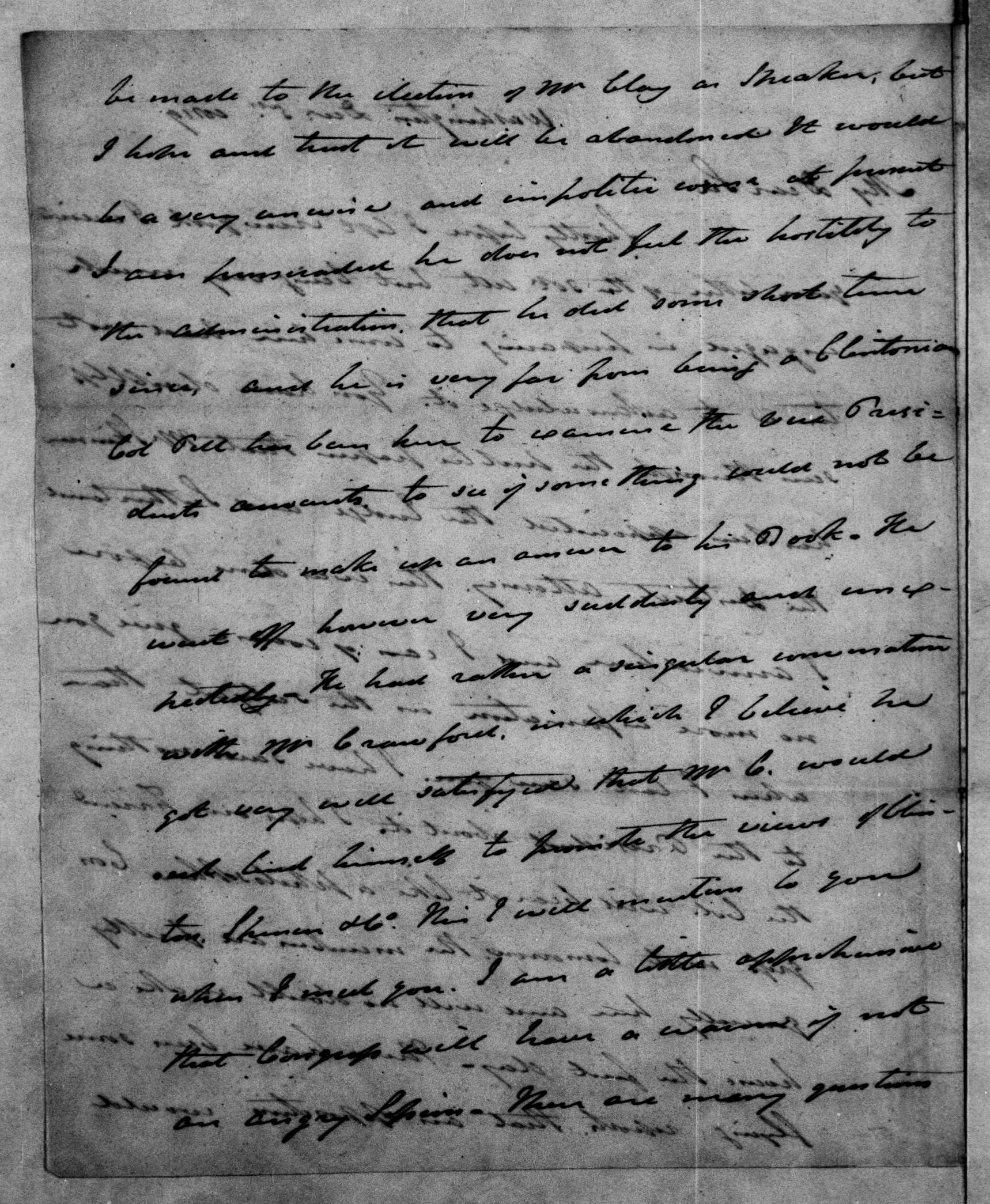 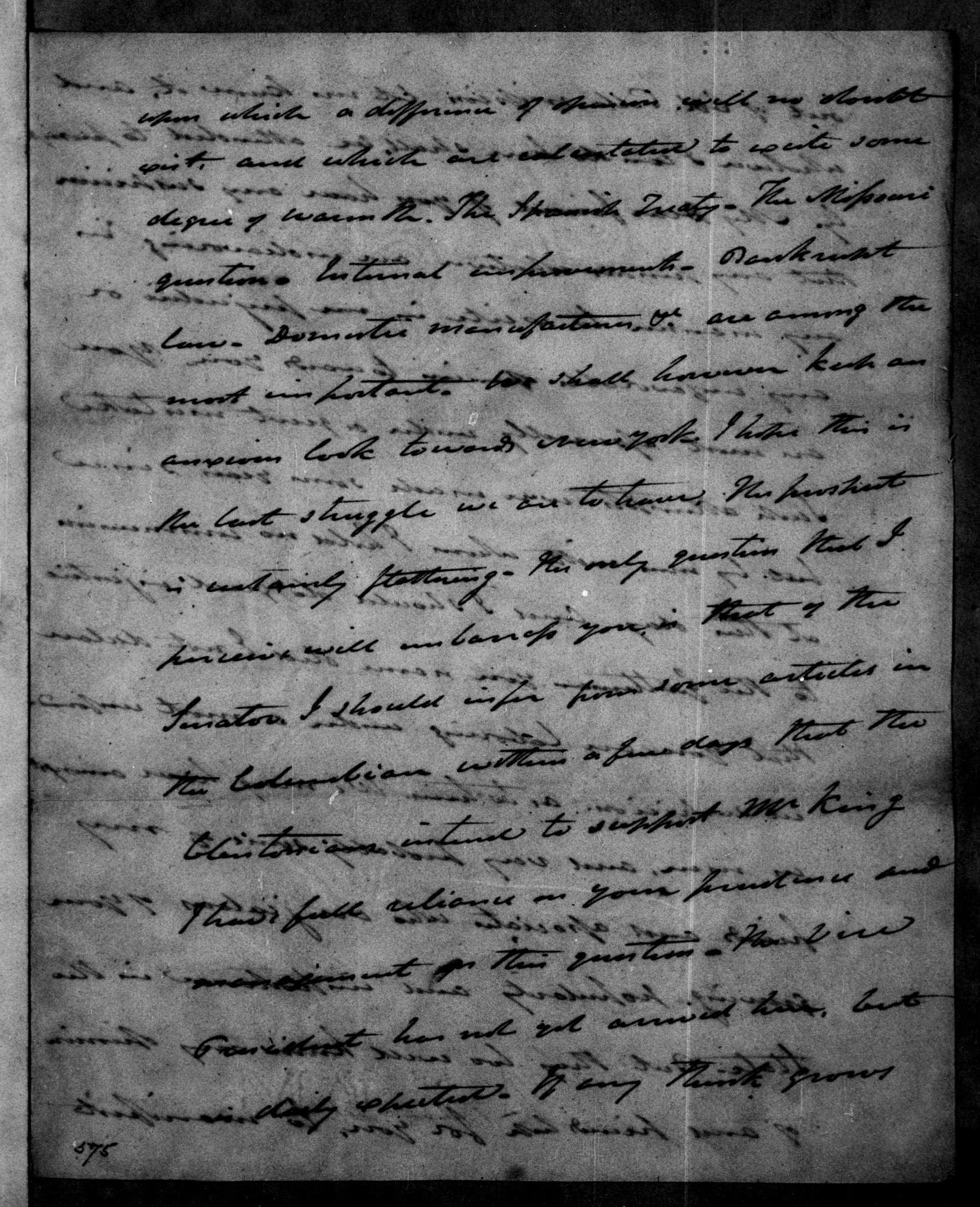 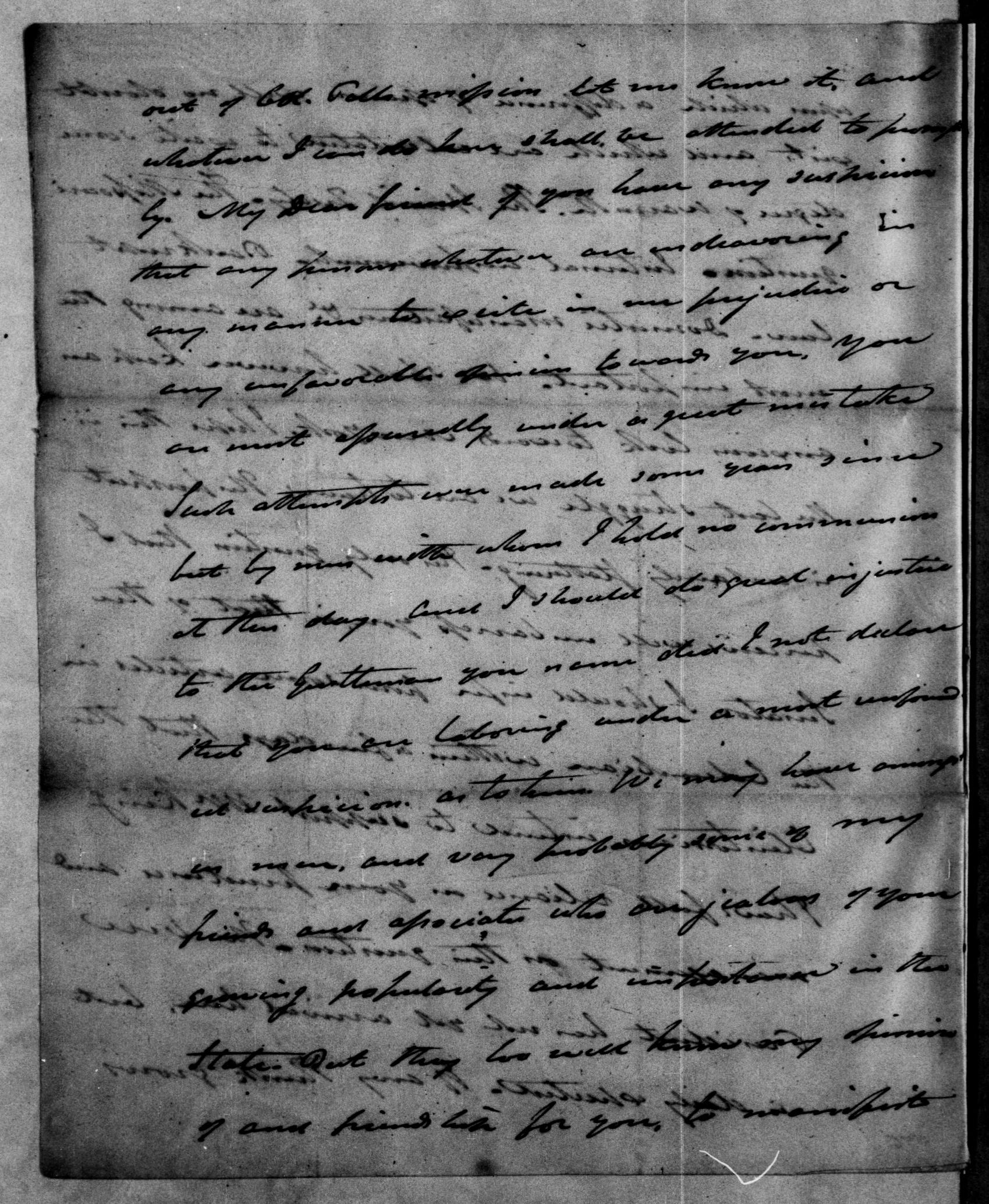 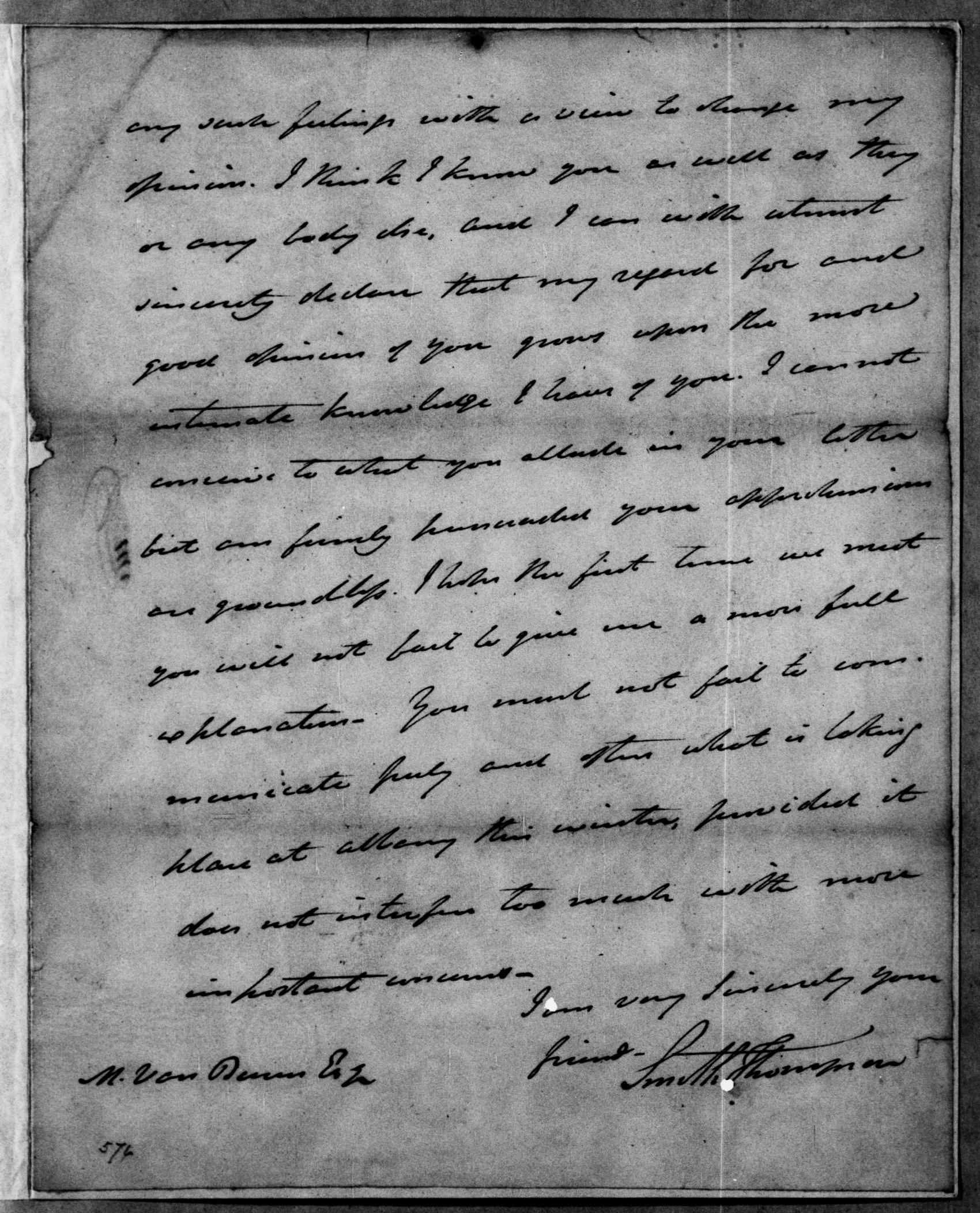 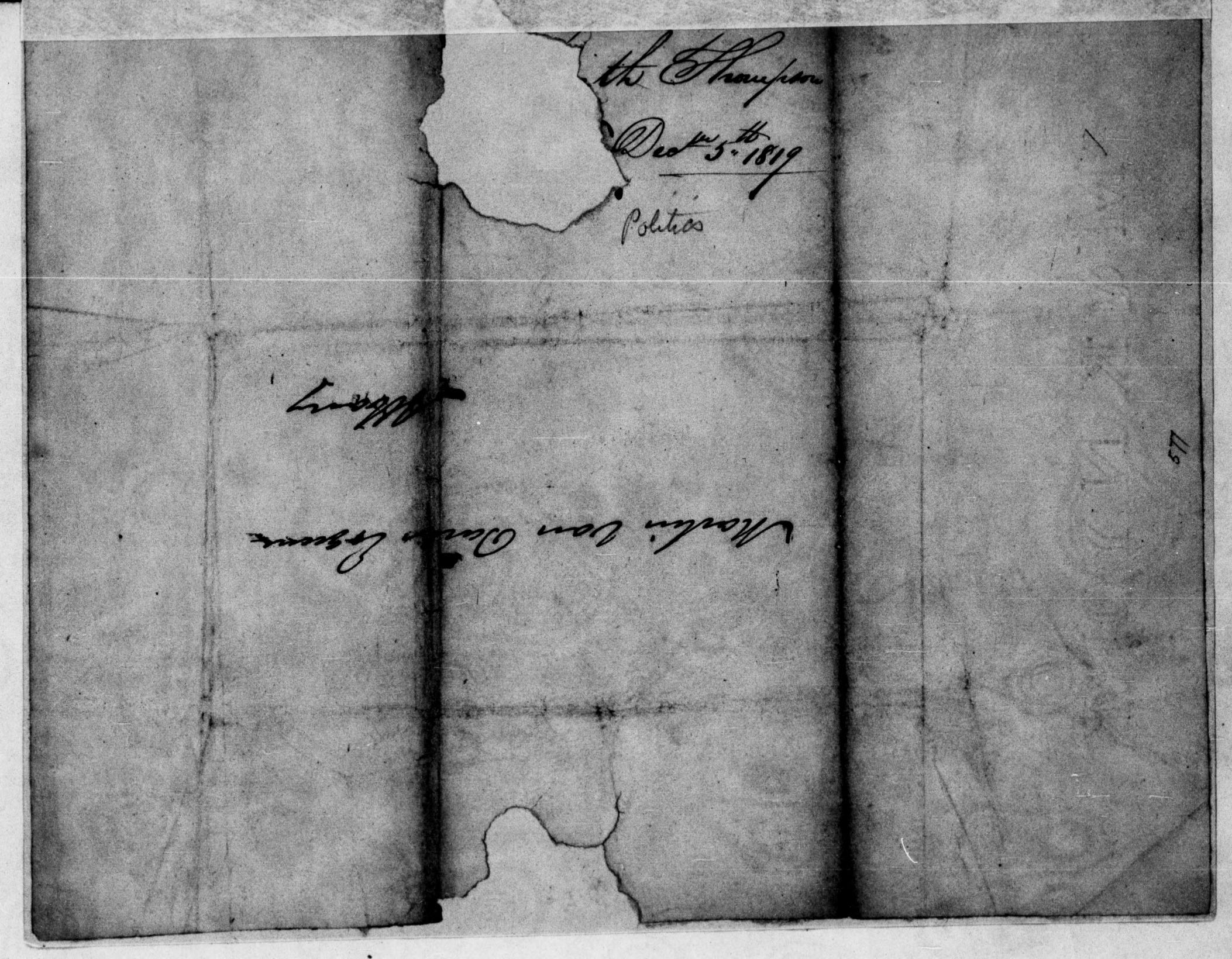