I have received your letter of yesterday ^the 3d Inst^ in which you feel yourself constrained to admit "that I may consider it extraordinary that you should set up your judgment in opposition to that of the very able and respectable counsel whose written opinion I handed to you, and that the weight of their character made you seriously distrust your own Judgment." To this you could with propriety have added that I might deem it ^the^ more surprising, that you should have come to the extraordinary decision now communicated to me after your recent ^previous^ assurance that if certain of the Judges of the Supreme Court whose opinion I consented to ^you might^ take on the question ^if you thought it proper^ should <illegible> ^think^ with the Counsel I had consulted or should decline giving an opinion you would in either case forthwith adjust ^decide^ and settle the account with pleasure. When it ^was^ ascertained that the Judges alluded to declined expressing an opinion on ^all voluntary interference in^ the subject ^matter^ I did hope and for once believed that you honestly ^sincerely^ intended to close the accounts and that belief was confirmed by the circumstance of your requiring my ^the^ contracts and certificates ^evidences^ of loans over night that you might examine them and ^as I very naturally concluded^ make the requisite calculations & when too you informed me that you must decline allowing <illegible> and received my consent that that question might be <impeded>. After this instead of meeting you in the morning disposed to conclude the business, to receive your letter of yesterday ^the afternoon^ with my papers enclosed ^rejected & returned^ was, I confess unexpected. to me. It is difficult to conceive a Justifiable motive for requesting the possession of those papers, with the declared intention of making the necessary calculations ^of examing them^ if you had not concluded to abandon your singular and extraordinary construction of the Act, ^an act^ which a just and enlightened Legislature had passed for my relief, but which by the ^arbitrary^ exercise of the authority which your office gives ^confers on^ you you ^seemed disposed to^ <illegible> bending to my oppression.

I feel conscious that I am not ^neither^ justly chargeable with being either suspicious or uncharitable, but connecting your conduct in this particular with other circumstances I cannot resist the belief (and I know of no reason why I should omit the expression of it) that you had become alarmed at the impression which your ^sole individual^ pertinacity upon the construction of the Act was making upon liberal and just minds, and fondly hoped to find the papers defective in proof of the parts required by the act that you might thereby be enabled to make a settlement of the accounts on that ground, & that it was only when you found that expectation vain that in the last resort, you formed the resolution of <referring> ^<reserving>^ an objection which you had before virtually ^apparently^ abandoned.

When you consider that in this case you have wholly departed from the ordinary course of your official duties—that instead of calling on the law officer of the government for his opinion as was proper for you to do and as you have done invariably done on similar occasions, you avoided that plain and simple course during the time of the late Atty. Genl.—that you have not thought proper to take the public and official opinion of the present Attorney Genl. but that not being a professional Man yourself you have declined the legal aid which the goverment has provided for ^you^ and set up your individual opinion ^doubts^ on the question of construction in opposition to the clear and decided opinion of nine of the most able and respectable counsellors in the Country—three of whom have been Attorney Generals of the State five of them distinguished Judges of important State Courts, one of them your predecessor in the office of Comptroller and one ^another^ of them the very gentleman in whom you declared you had unlimited confidence and to whom you refered me in support of your doubts upon the construction of the act, and all of whom you are constrained to admit were ^are^ gentlemen of distinguished character and probity. In view of facts and circumstances like those You cannot with propriety complain that ^but suppose that^ I should suspect the motives which ^it is inexplicable to me on what you^ have grounded your conduct in this affair.

I was frequently informed ^at^ New york and after my arrival here that the declarations of your political and confidential Friends were, that a settlement at the present time would at all events be evaded by you, and at our second interview I frankly communicated to you the information I had received on that subject. You repeatedly assured me, that my apprehensions that they must have had some authority from you for such confident predictions were wholly groundless. What credit I can now attach to the sincerity of those assurances I leave you to decide ^How far those assurances are reconcilable with your subsequent conduct let the facts decide^.

Your suggestion that I might ^may^ apply to the Supreme Court for a mandamus, at the time and under the circumstances it is made is — not less extraordinary than the rest of your conduct in this affair. I venerate I trust as much as any man the Judicial institution of the Country ^State^ and have laboured with sincerity and zeal to preserve their just authority and to perpetuate their usefuln[ess] however much it may be regretted by every sincere Friend to the honor and interest of the state that they should in any degree have become entangled in the conflicts of party. It is an object of the first importance that they should be preserved from the danger to which it is to be feared they are exposed, but this is not the occasion for a discussion of that subject. And my only motive for the remarks I have made is to prevent the circumstance, I am compelled ^shall proceed^ to state, to place this suggestion of yours in its true light, from being attributed to feelings which I do not possess.

On Monday Evening the business so far as principle was concerned appearing to be settled between us I mentioned to you in a free and familiar conversation, my regret that you had not in the first instance submitted the question to the proper law officer of the State instead of applying privately to any ^certain^ of the Judges of the Supreme Court ^who you knew to have political prejudices against me^ for an obiter undigested and exparte opinion on the subject. You had before admitted that such applicat[io]n had been made and ^then^ excused yourself from improper <conduct> in such private application and consideration ^therefor^ by a declaration of your solemn opinion and beleif that it was not possible that the Judges could ever be called upon to express an official opinion in the case—yet the next day without assigning a single reason for it without a single opinion of counsel or even favouring ^taking^ the opinion of the law officer of the government as to the propriety of the course ^suggested^ you propose to drive me to the obtainment of their ^of what is <illegible> <illegible> of the^ Judicial opinion and to submit the question to ^of a Court^ the very <illegible> two of whom ^two of ^^the^^ Judges of which^ you often submitted ^suggested^ would not be proper arbiters between us and who you professed a wish to exclude from giving an opinion on the subject.

It is true that you have since qualified this <impression> suggestion by saying to me that ^you merely meant^ they were improper persons to decide out of Court and extra Judicially and that you had wished to exclude them only in that case, but that the circumstances which would constitute an objection to their being Arbitrators or ^exparte^ advisors out of Court would form no objection to their competency or uprightness in deciding the sa[. . .] Judicially. I then stated to you and now repeat that I could not feel or admit the justice of this distinction.

What Sir, under circumstances like these can I think of the motives which have given rise to this suggestion. As <since> The course of litigation and further expense proposed by you to compel you to do what the law imposes upon you as a duty is one that I shall not resort to, as well because a mandamus would not probably lie in such as case as because I have avoided as much as possible through the whole course of my life controversies and disputes in law.

I shall therefore ^prefer to^ submit to this as I have to much other Injustice received at your hands in your administration of the office of Comptroller ^in the course of my business with the State^, with the patience and resignation that becomes an injured but peaceful Citizen

I am Sir your Obt St

to the State Comptroller 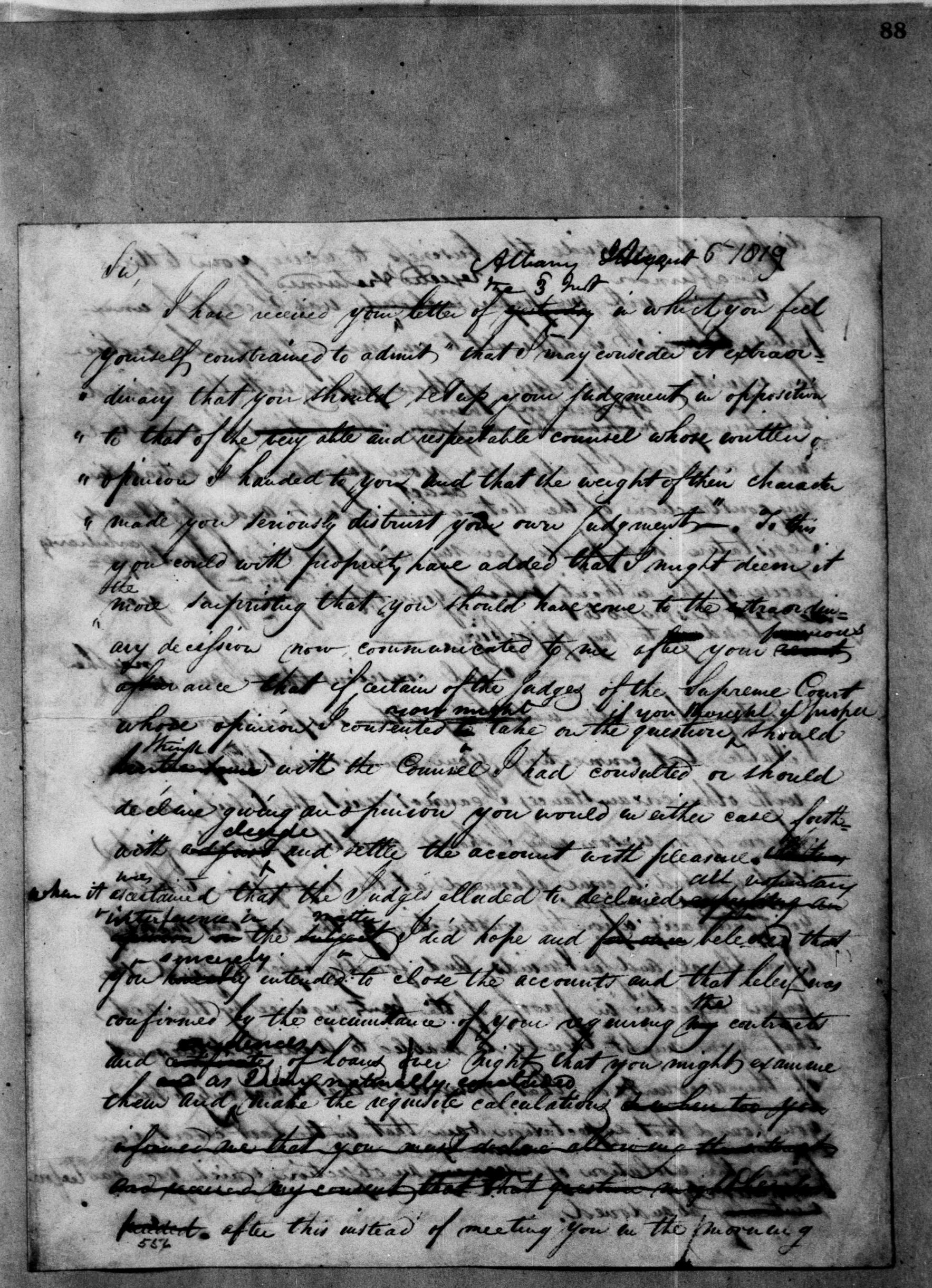 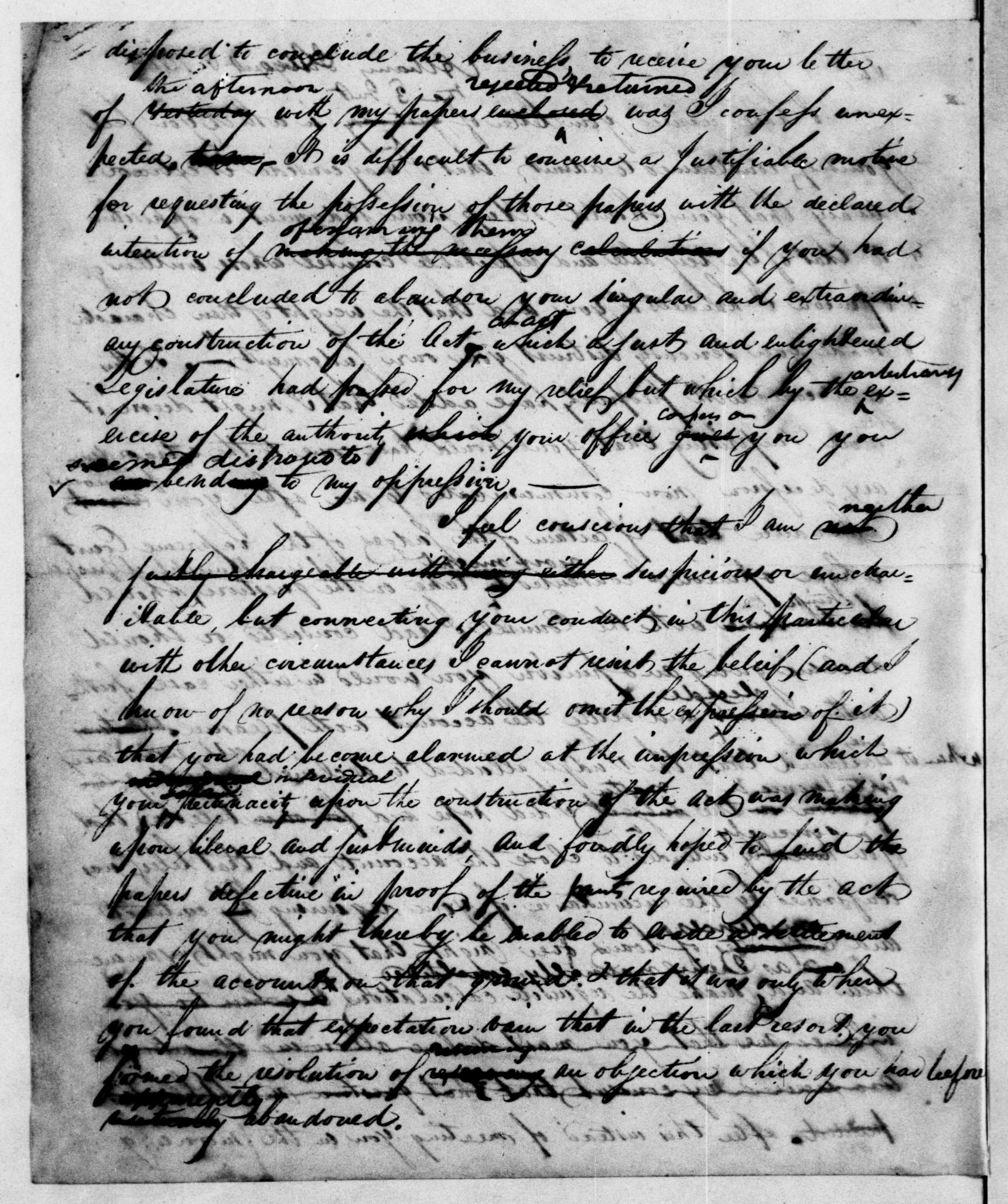 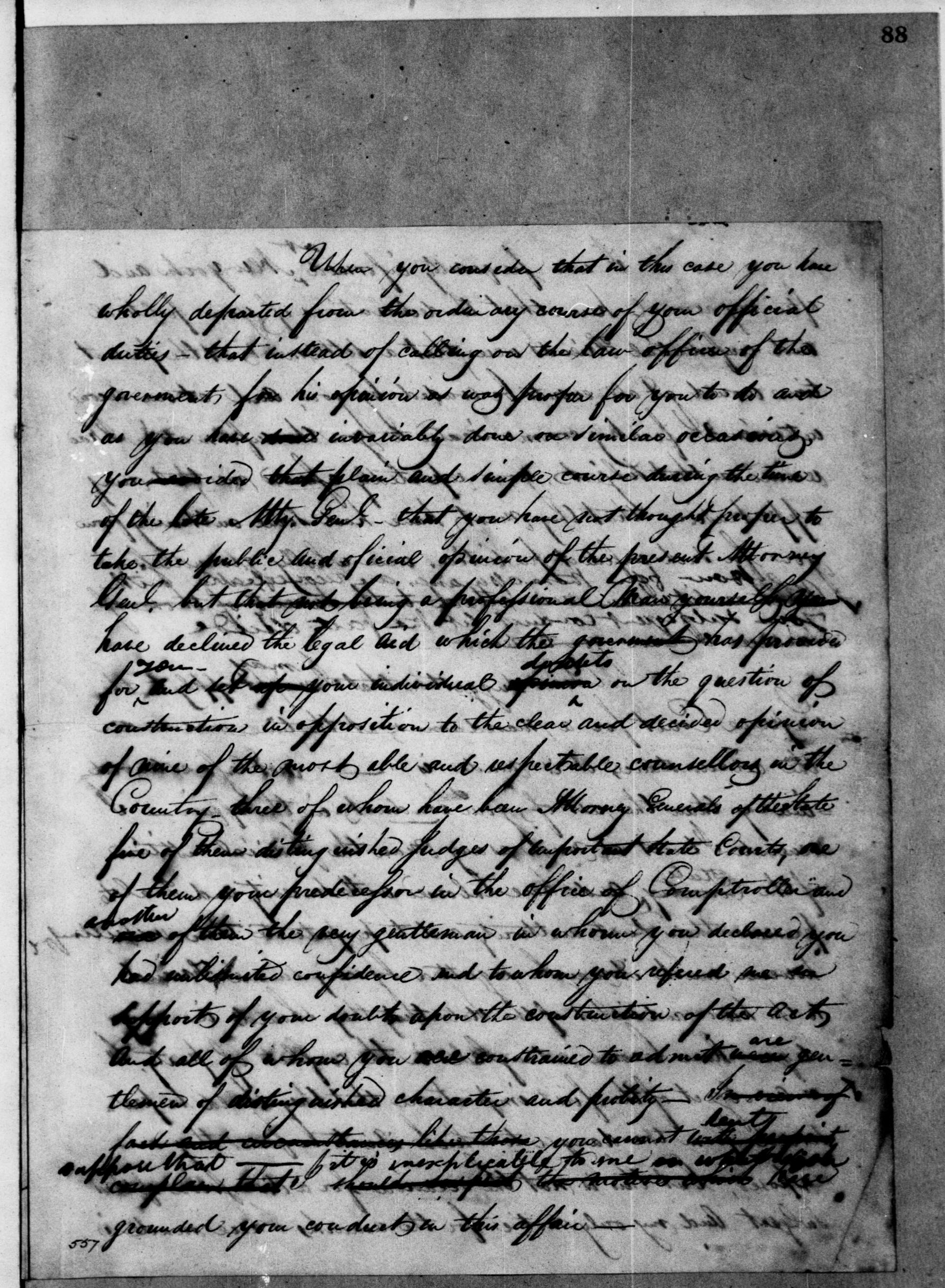 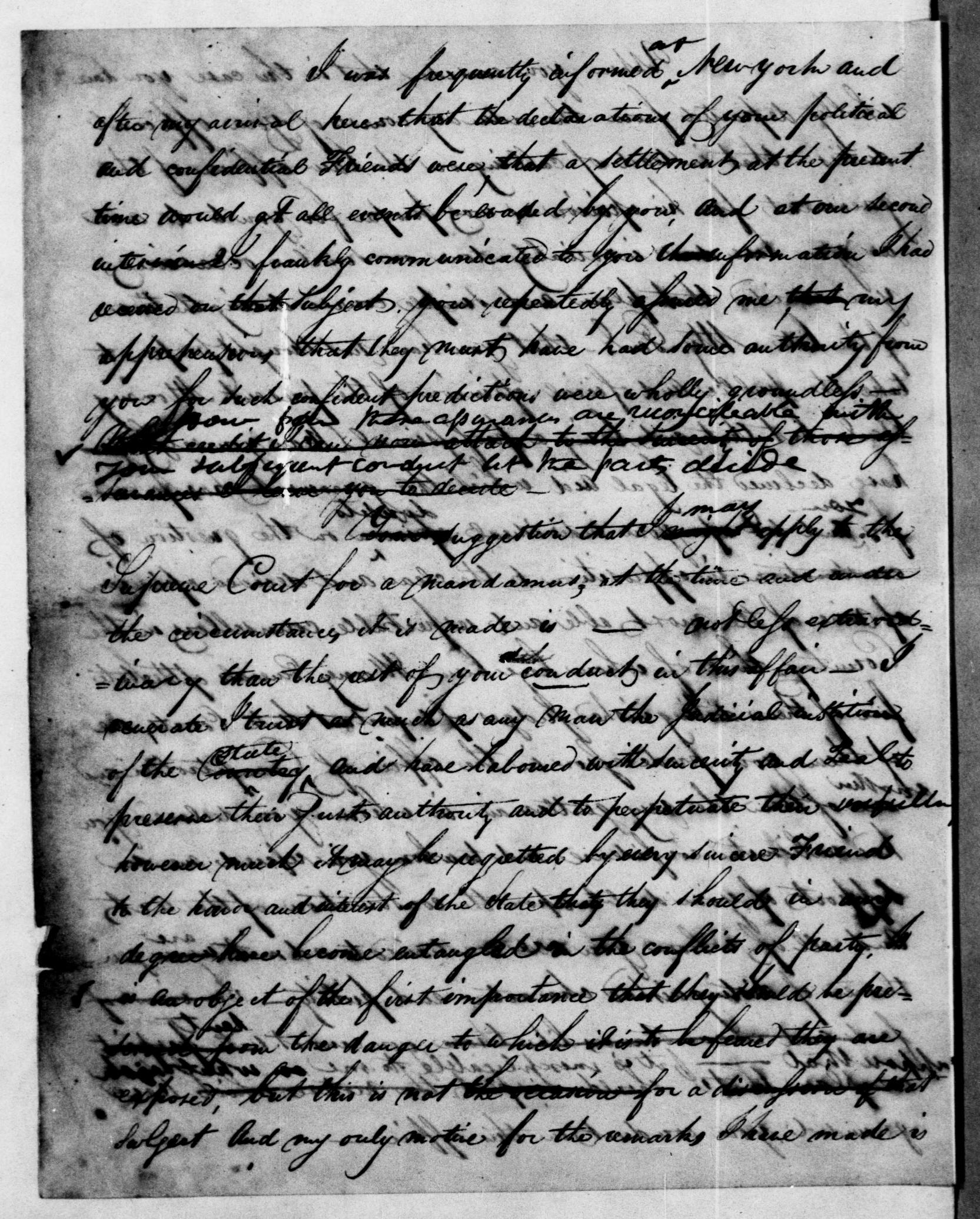 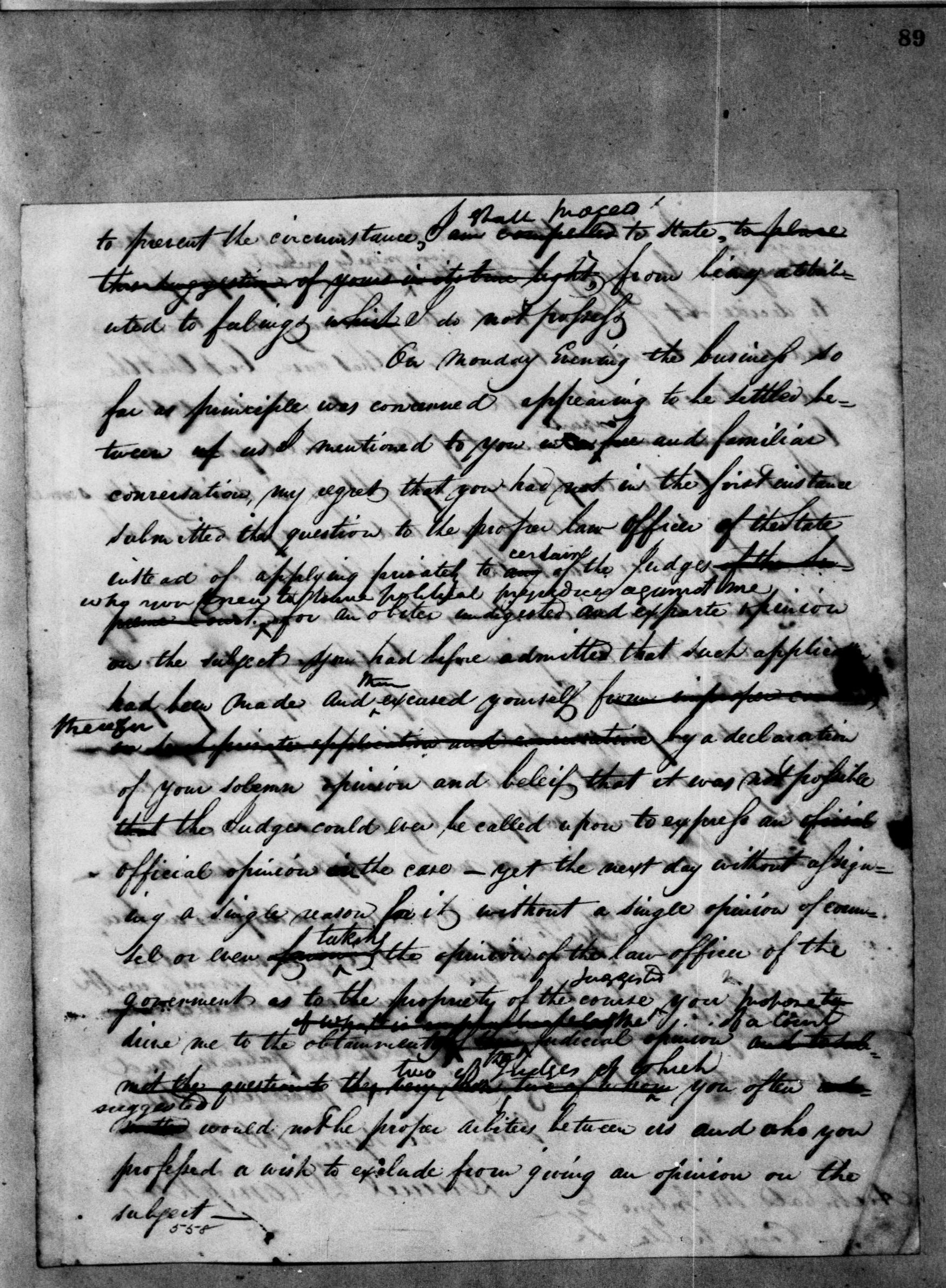 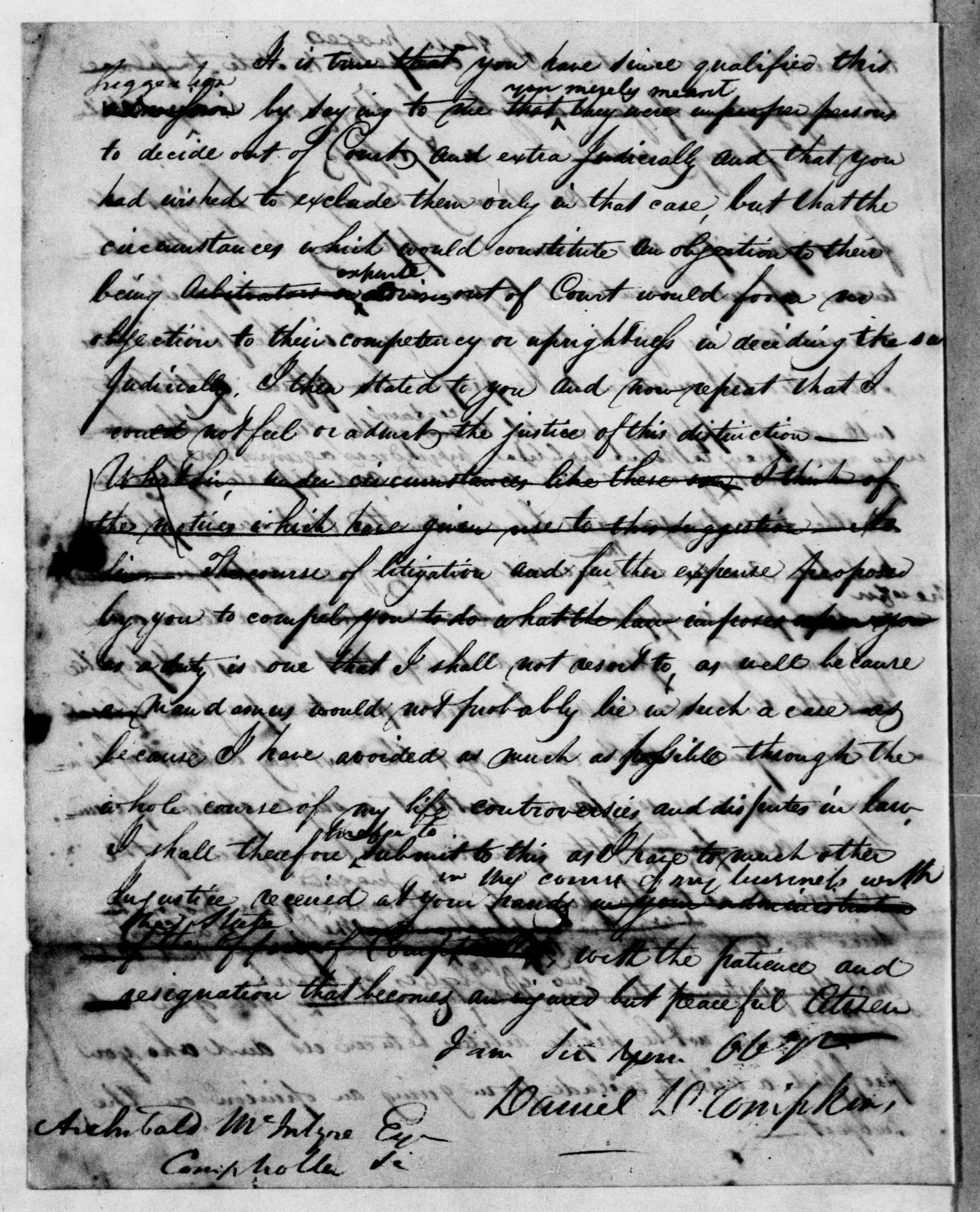 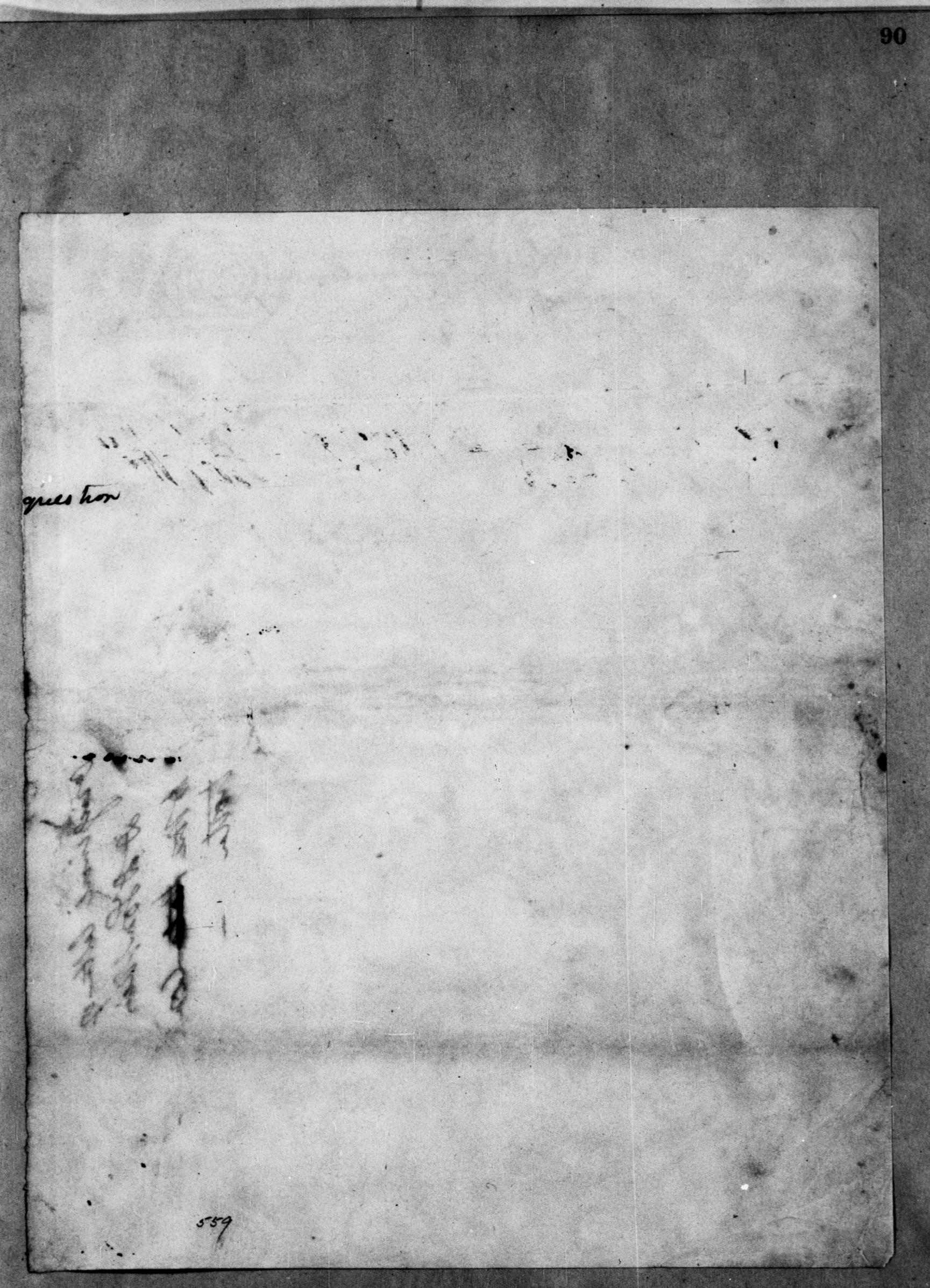 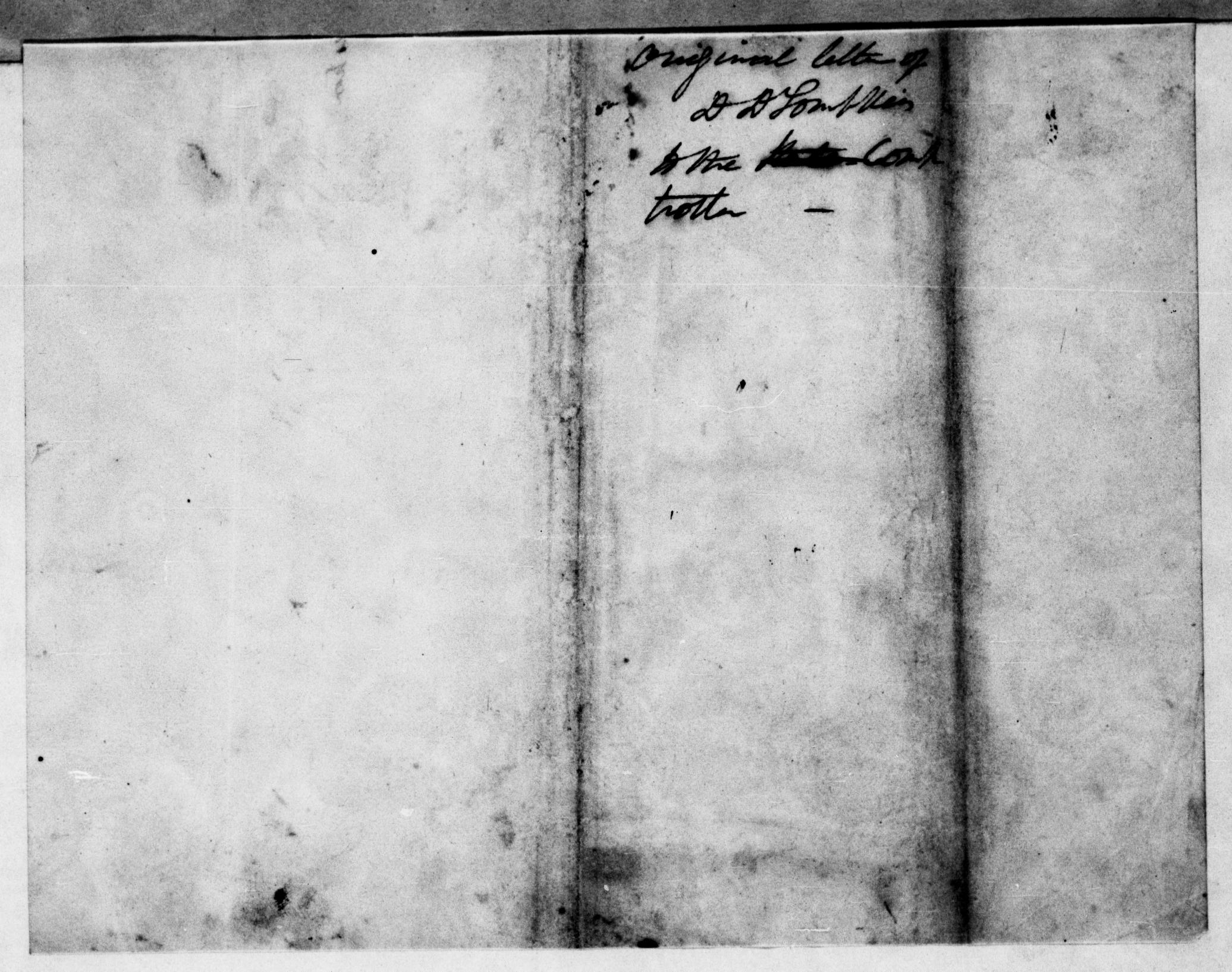