I received yours of Tuesday last, and should have waited for the arrival of the one you intimated you should soon write, if I did not deem it of importance to call the attention of our friends at Albany to the question of Presidency, without delay.

Our Delegation are likely to fall into an irreconcilable opposition of sentiment, and the probability is that Monroe must from that obtain his nomination.

Those who were last & most reluctant to avow themselves for Tompkins on our arrival here—more pertinaciously persist for him apparently, when all possibility of his success is gone by, or is rather as is now ascertained, never existed. They some of them declare openly that they will vote for Monroe in preference to Crawford—and yet endeavor to inculcate a belief that it is all out of regard for Gov. Tompkins.

They say our State will be disgraced, in giving any support to Crawford, as Monroe must prevail &c, &c The explication of the whole difficulty in my opinion follows from that persuasion of theirs—and some are glad of any pretence to chime in with & what they think the dominant sentiment—others probably act with Monroe’s friends out of a real resentment for an indignity they fancy themselves to see, towards the State of N.Y. in gentlemen from other States refusing to support our candidates.

You are better able to decide what the Republican wish is in N.Y. I have always understood the prime object to be to put down a Virginia candidate, by one of our own if practicable—if not, by some other.

The business might have been better managed than we have conducted it, but never I am bold to say with more real zeal & anxiety for the attainment of that purpose by our own means, than we have entertained. I perceive however, that a part of our Delegation understand the matter quite differently. They now say they suppose the essential views of New York to be, the election of Gov. Tompkins—if that could not obtain, that it was indifferent to her who had the Presidency—or rather that she would as soon give it to Monroe as any man.

If you all wish Mr. Crawford to be pushed, he must be nominated at Albany. The secession in our Delegation will jeopardize, probably destroy the practicability, of nominating him here. The overwhelming influence of patronage has reduced the party to an equilibrium in Congress on that subject—a slight inclination, which is most to be expected against us, will decide the matter in favor of Monroe.

If NewYork actually is indifferent—provided her own candidate cannot succeed—pray let us know, and we will not make ourselves ridiculous, by urging the thing further. We will not attend the caucus at all, and let the ship drop down the established course, by the force of the current.

Mr Fisk has been in Washington—Col. Hawkins is now here—and Virginia has the full benefit of their talents and influence. I understand they have only undertaken for the New England states & NewYork.

Messrs. Hawley & Dennison will inform you minutely of the state of feeling & strength here when they left us. We know perfectly well that we shall be misrepresented by some whose views oppose ours—that they will now affect to bluster about the practicability of carrying T____ but no one who has witnessed the scene could doubt at all upon the subject. They have given themselves no other trouble than to consult Monroe’s friends—and their own imaginations.

Nothing in particular has transpired since Messrs Hawley & Dennison left Washington, other than a more explicit declaration of some of our delegation for Monroe—than I before knew they had made.

I believe there is a strong majority of Republicans here opposed to Monroe—and who would prefer Crawford, but it is highly questionable whether timidity or discretion does not keep them silent, till the event emboldens them to speak—and they will then be too good patriots to differ from the decision that is made.

Will you come to an early understanding on this subject and let us have the benefit of your determination?

Congress are to-day on the old question which we had before us when you was here—the “treaty-making power”—the bill from the Senate was under consideration and was amended by substituting ours in its place—ours had been rejected by the Senate.

Our House have in effect decided on retaining three millions of the direct-tax for one year—tho’ we have now a proposition before us to reconsider that resolution. 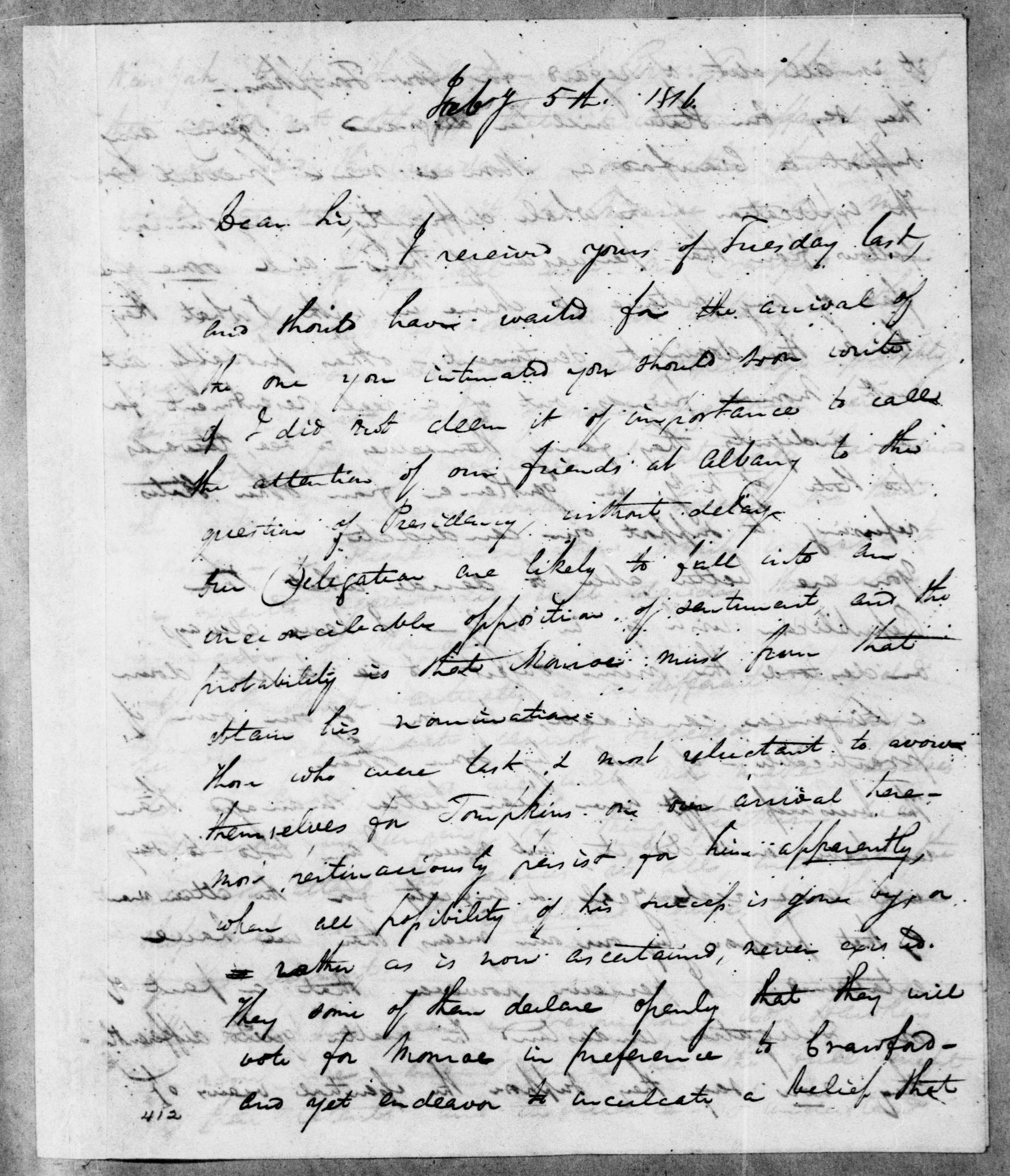 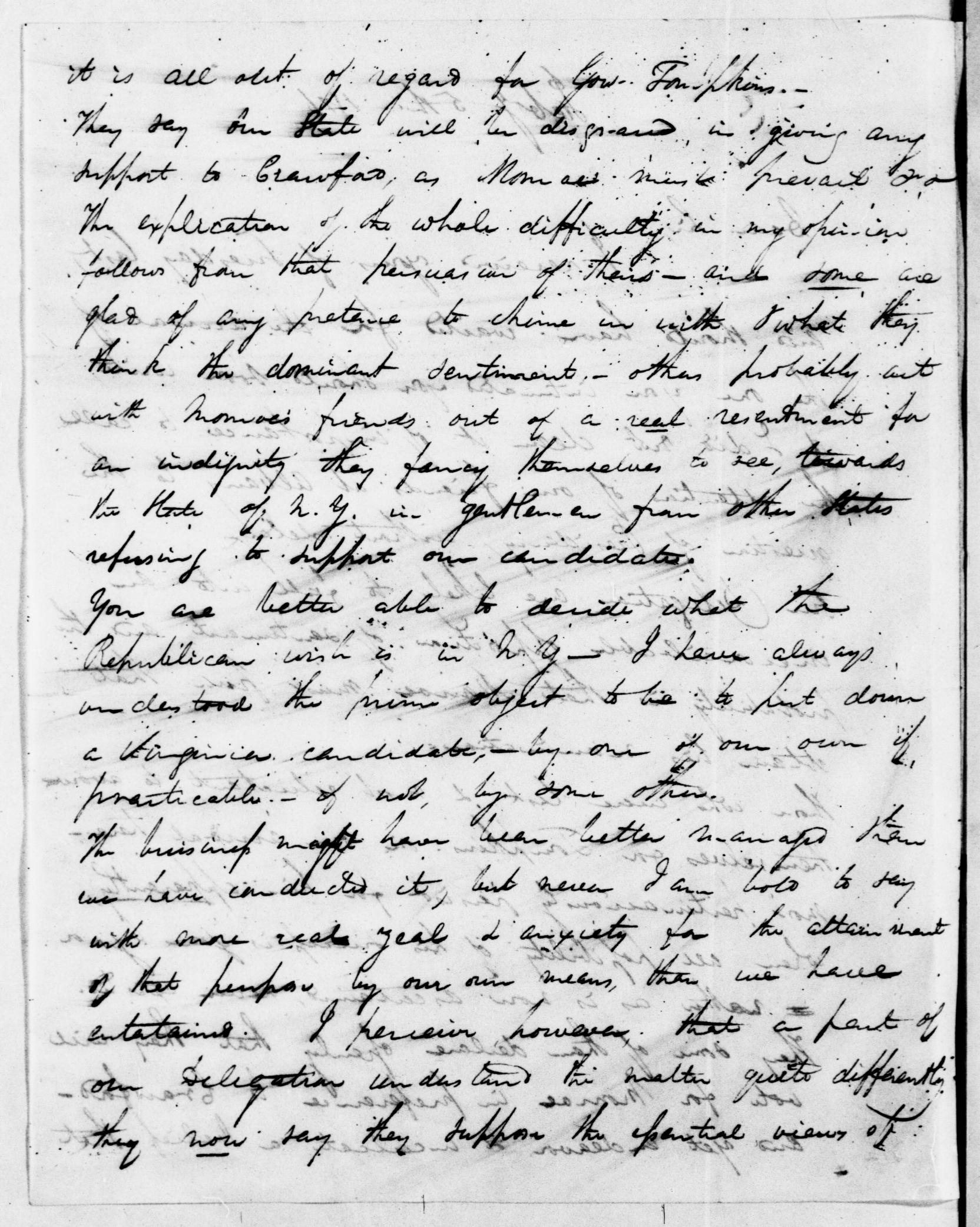 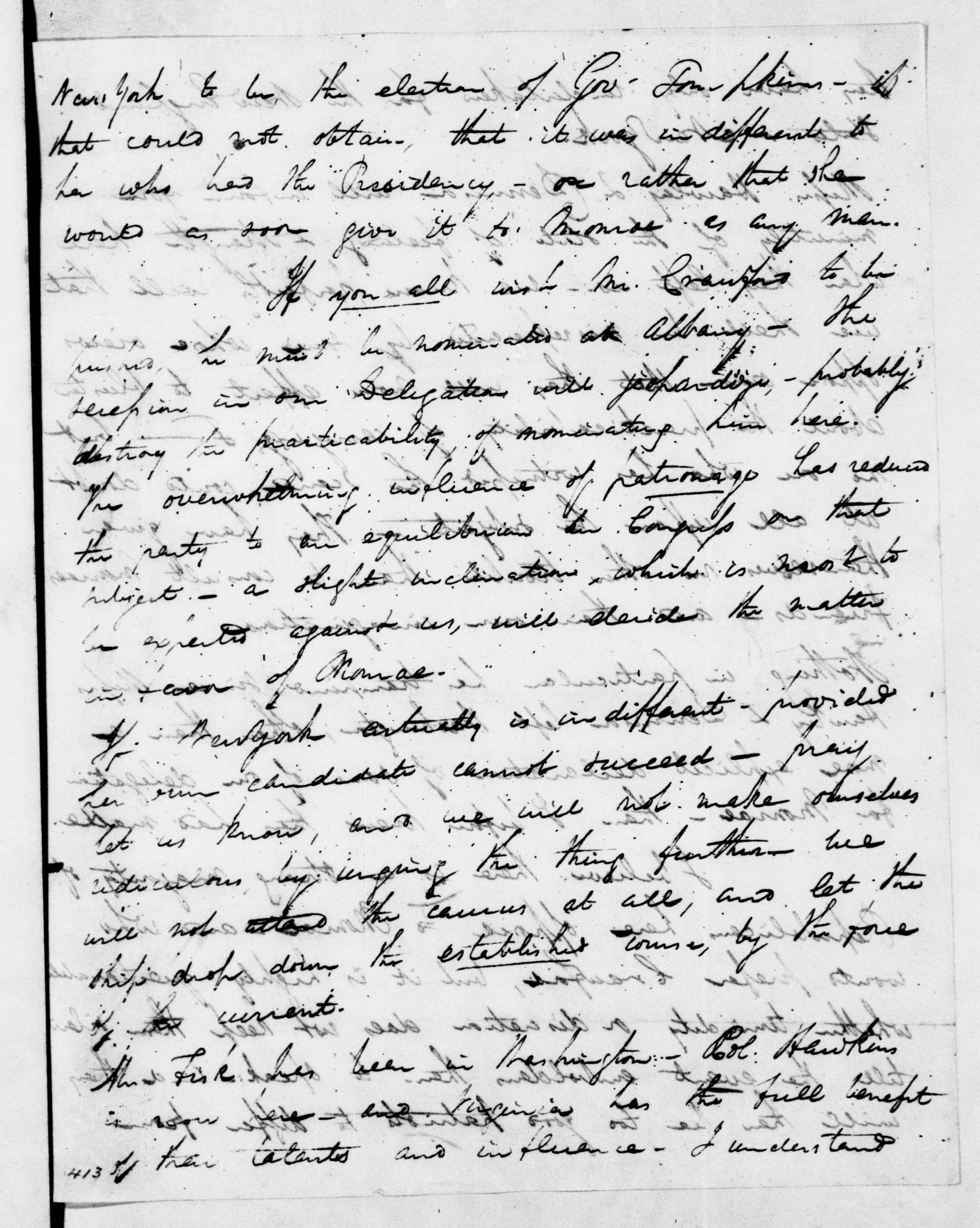 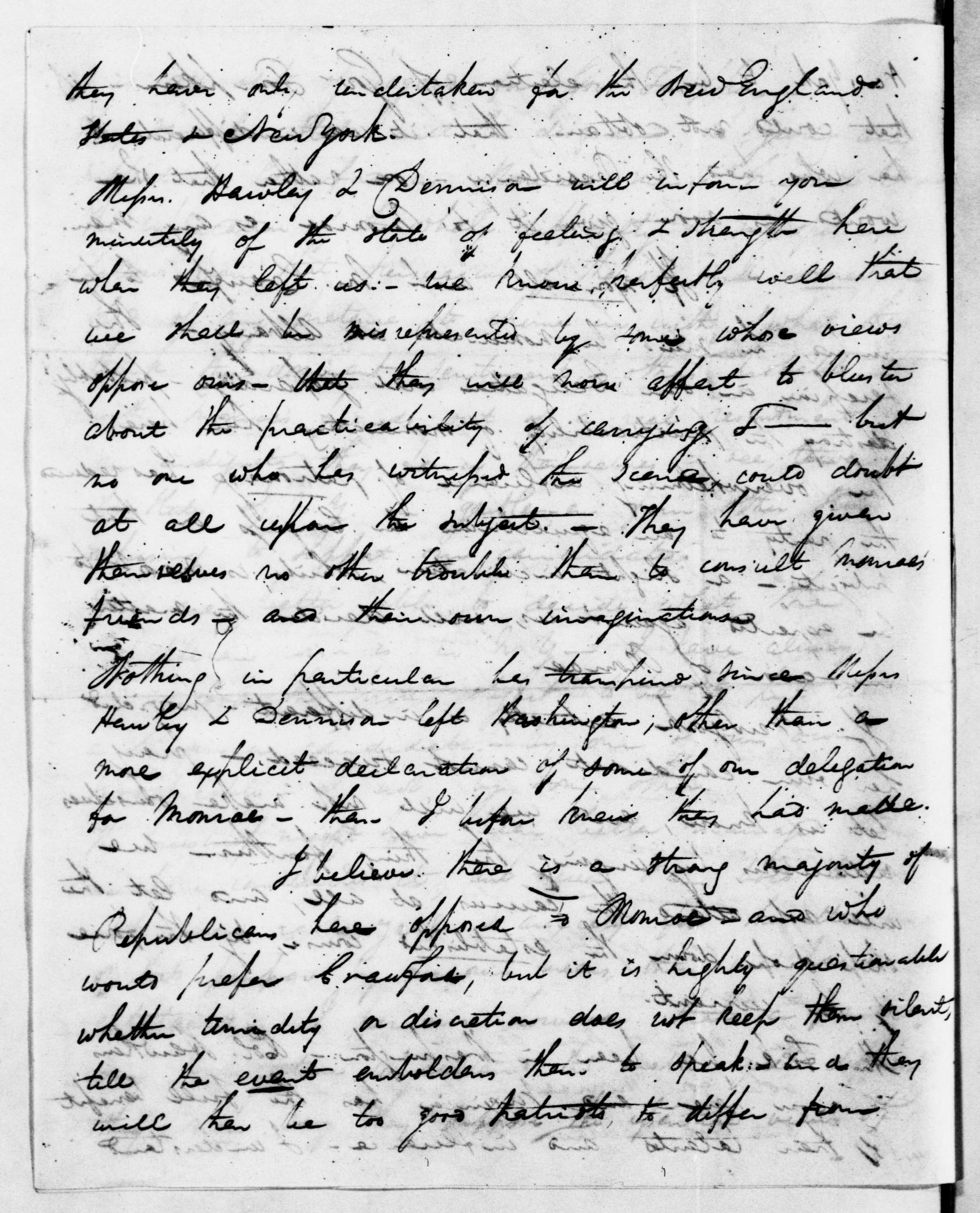 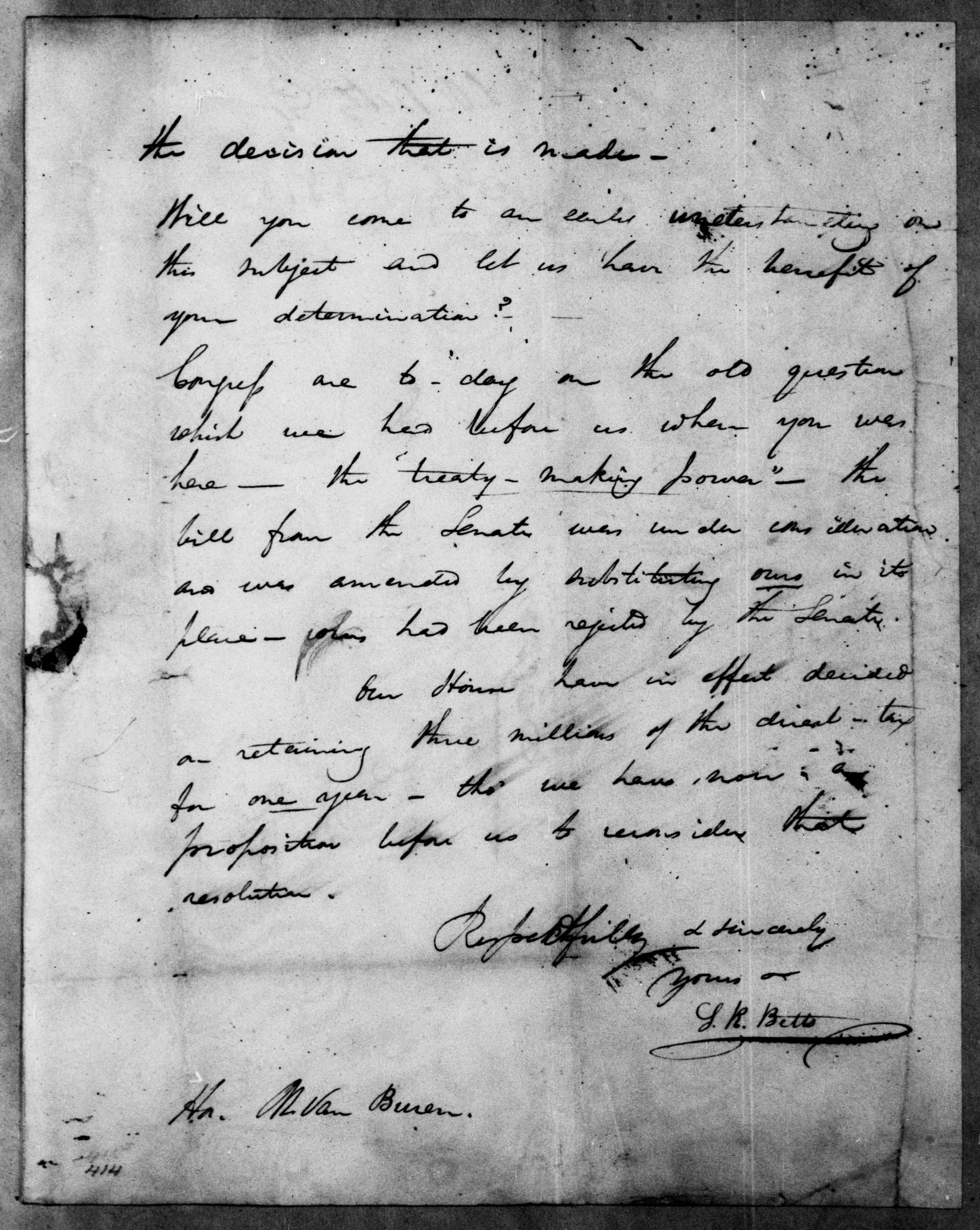