I duly received your letter of the 10th Instant.

I called twice at your lodgings before you left Washington but was so unfortunate as not to find you in. One object which rendered me desirous to converse with you was to have obtained your advice on the subject of selecting a Candidate for the next Presidency, another was to have submitted some of my ideas to you respecting the merits of an application to the Legislature of New York to divide the County of Otsego.

On the subject of selecting the Presidential Candidate I can at present say but little, which will be interesting to you.

You will before this reaches you have heard of the unanimous determination of the New York Delegation to support Gov. Tompkins. But the Ways & means, to accomplish the object of our wishes have not been exhibited to me in such light as to render me very sanguine in my hopes of success. I had not been in this place two days before I was convinced that unless the Southern interest could be divided all efforts to procure the nomination of a New-York Candidate would prove abortive.

I had supposed that our true policy was to support the pretensions of Mr. Crawford in preference to Mr. Monroe, and if Mr. C. & his friends could be induced to pit themselves against Mr. M. & his friends, such a state of thing would eventually be produced, as would enable us to procure the nomination of our Candidate or which would be next best, to decide the controversy in favor of Mr. Crawford. The Majority of our Delegation however have determined that we are to push exclusively the nomination of Govr. T. What little I can do therefore will be in his behalf, but I am sorry to say I have very little expectation of success.

The Applicants, as they pay by contribution the expences of errecting the public buildings, place the question on the same grounds as if no Court House had ever been established at Cooperstown.

Keeping this in view if on looking at the map you are not well satisfied that Otsego Schoharie & Montgomery ought originally to have been laid out in the manner now proposed I admit that you ought to resist the application. But as I think a base inspection of the map and an estimate of the population in the territory proposed to be erected into a new County will lead you to a result favorable to the merits of the applicants I shall not trouble you with any remarks on the merits of the application, as it will be perfectly obvious that Schoharie Herkimer & Otsego were gerrymandered by Judge Cooper, who at the time Otsego was erected into a County possessed an irresistible influence, for the purpose of bringing the Court House and goal to the Village of Cooperstown.

What will be the political effect of the contemplated Division?

•That County you know is decidedly Federal.

Otsego is balanced, but if we and I was sorry to say that we have little hopes of electing a single Republican from that County next spring.

The wealth of the County is vastly more in Federal than Republican hands—and by a little enquiry you will be satisfied that a variety of circumstances too numerous to be detailed in this letter render it not only probable but almost certain that Otsego will at the next election return Federal members.

But if this application does not succeed an application will succeed to take from the County of Otsego the Southern point which includes a part of the Town of Butternutts and the whole of Unadilla.

–This will render the County Federal beyond all hope of its being otherwise.

--Now, Sir, our plan of Division will take from the County of Montgomery Minden which gives a Federal Majority of from 200 to 300 votes.

• Take the result of the election for three years past in Montgomery and deduct the votes of Minden & Canajoharie and that County would have returned Republican Members. (I have no data before me but write from recollection).

The County of Otsego as it will be left if the division takes place will by nearly two to one return the to three Republican Members.

• By the contemplated Division we can loose nothing but may gain much.

–I am aware of the influence you have justly acquired in the Legislature. Far be it from me to wish that influence should be exerted in to in any other way than to promote the public good. And I feel conscious that if you afford yourself a little time to examine the merits of this application you will be convinced of the propriety of aiding the applicants.

I can only add that if you shall agree with me in opinion and will use your influence and exertion to bring about the event so much desired by the applicants, your exertions will not be forgotten by them, nor by 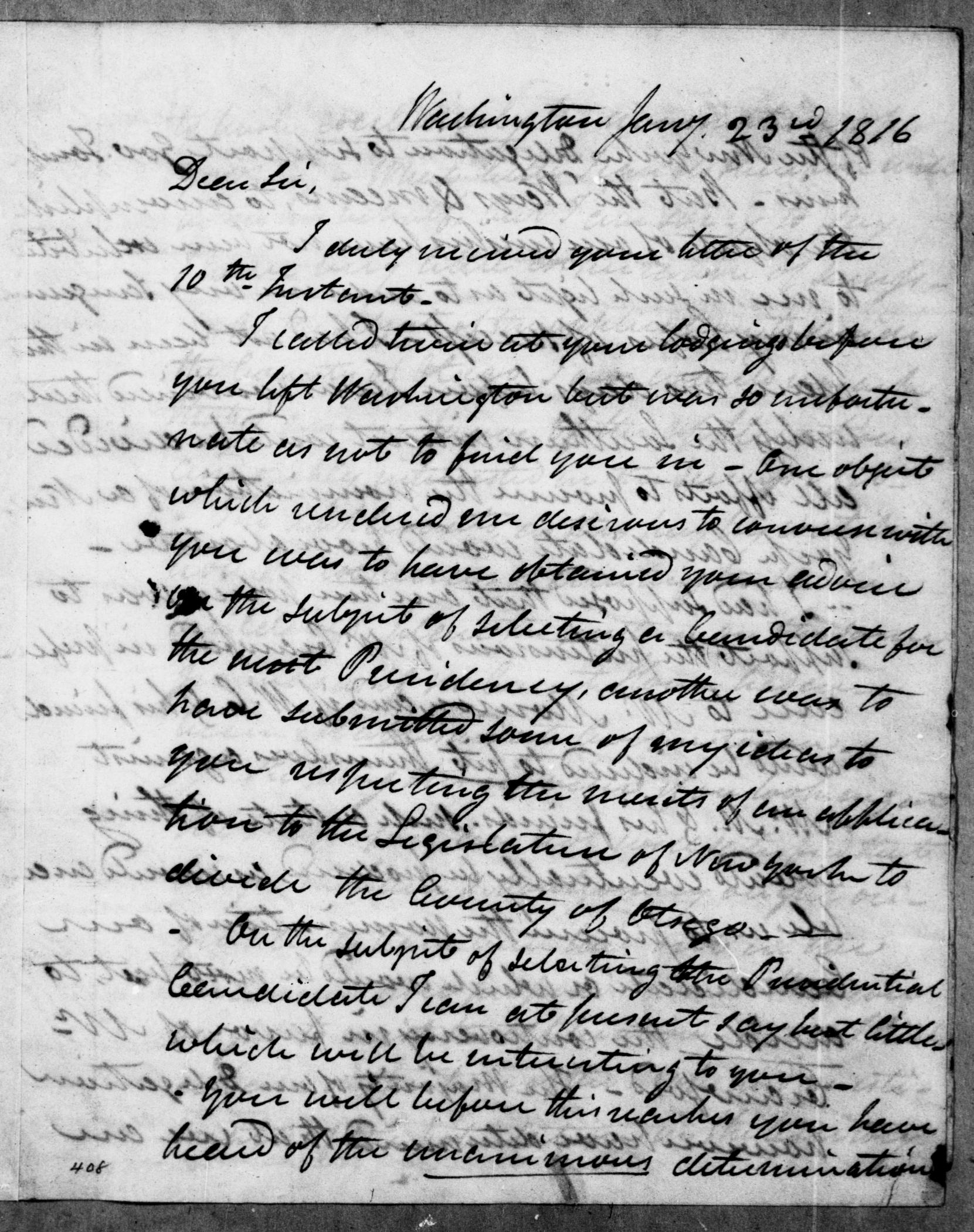 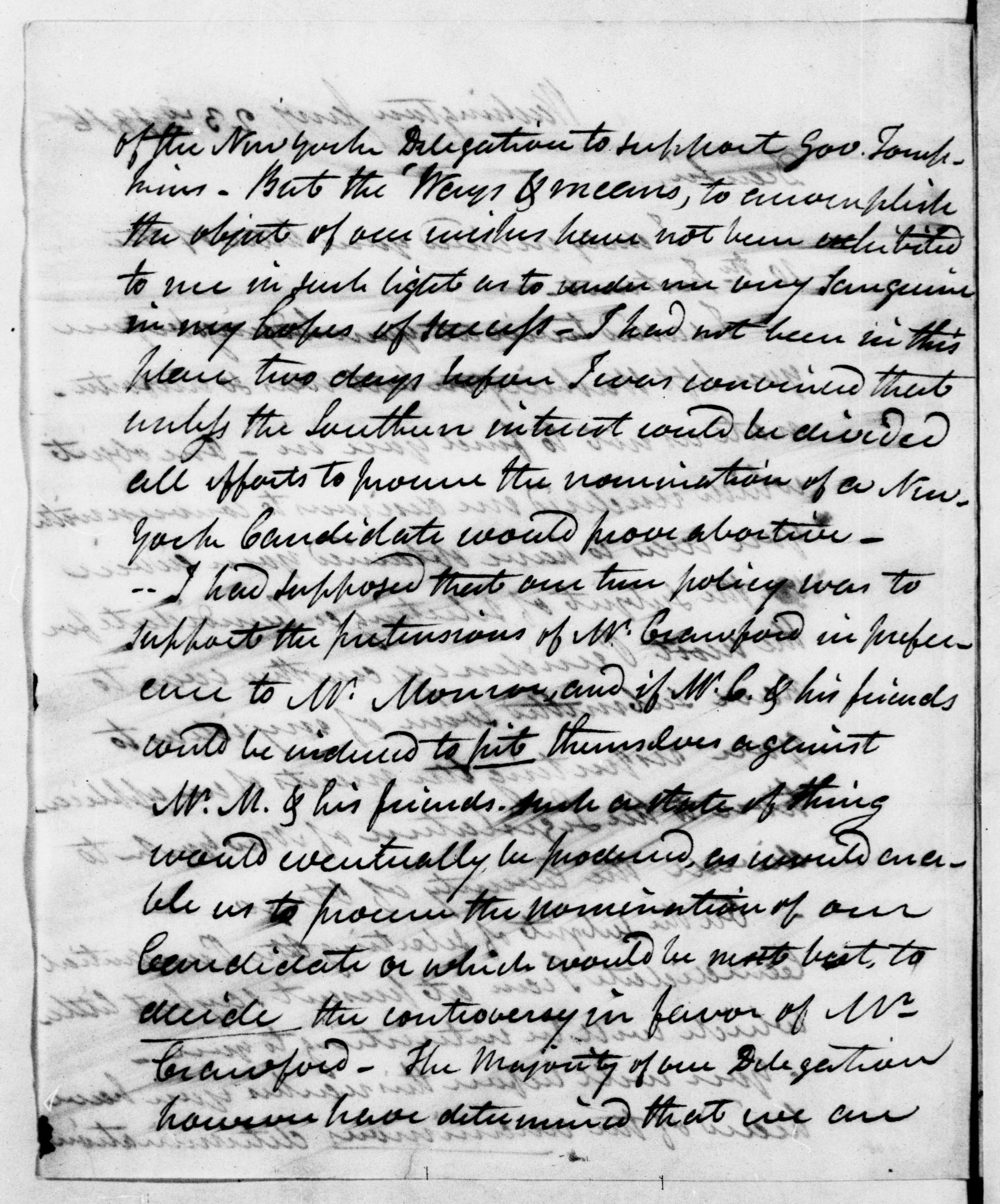 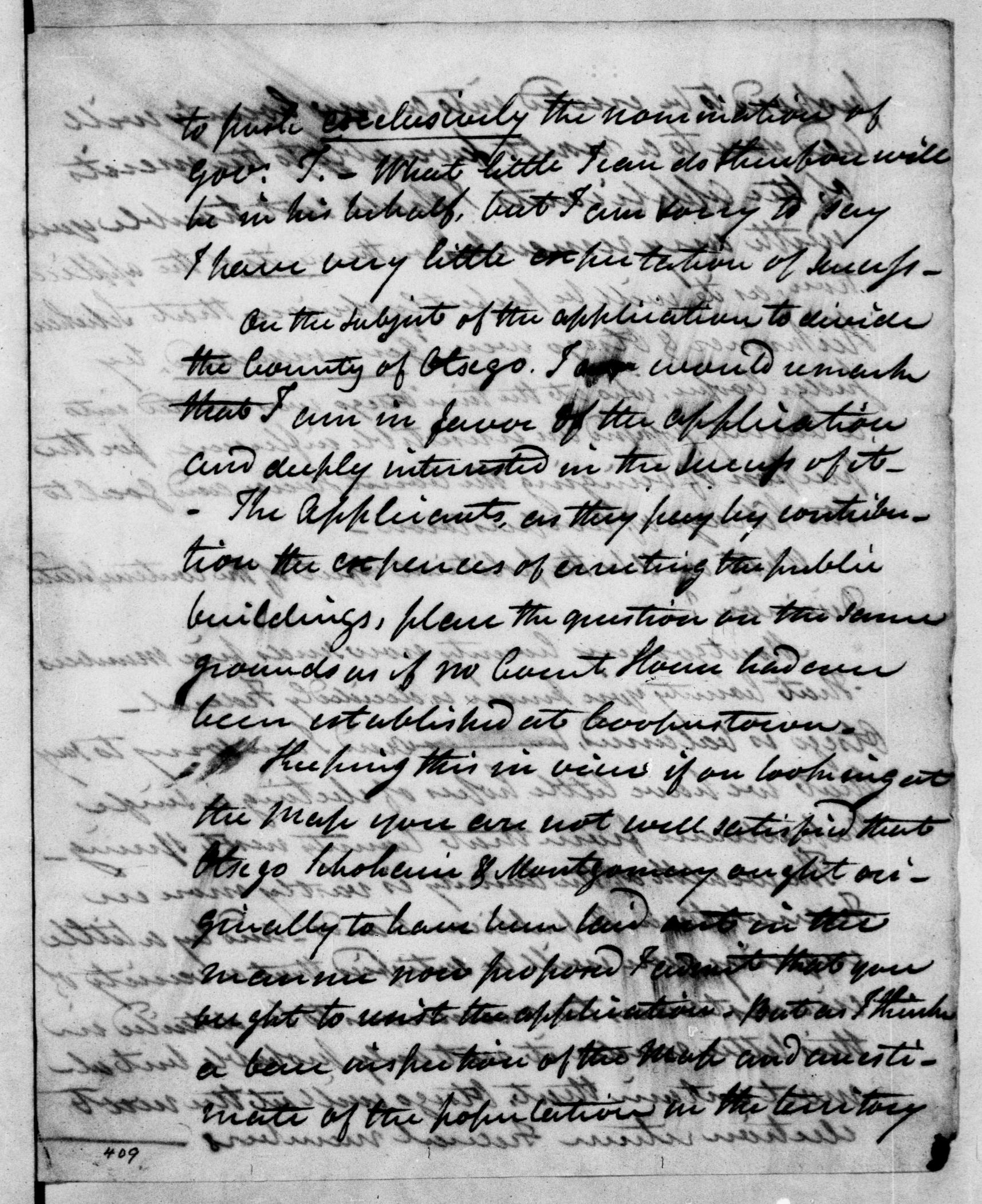 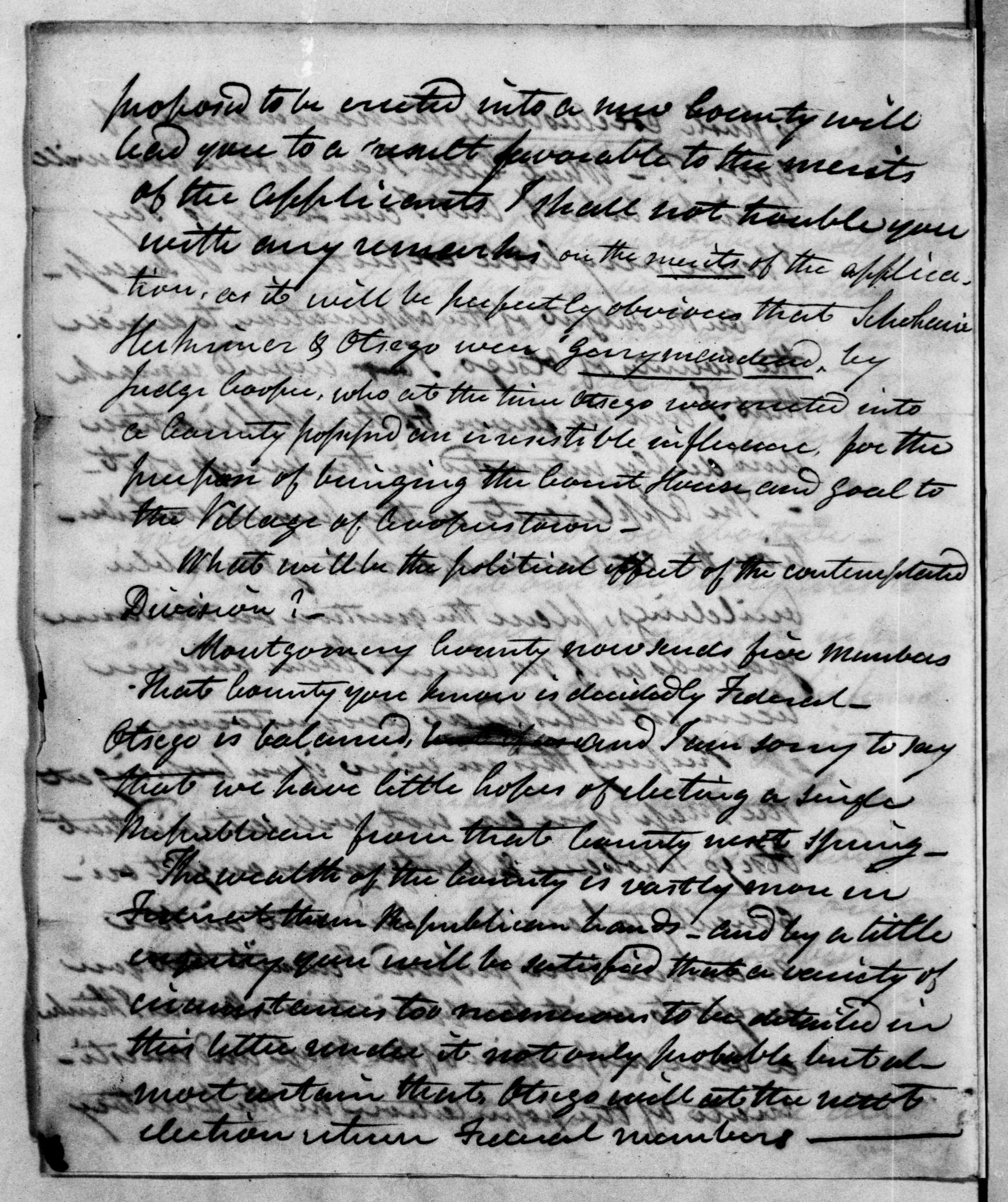 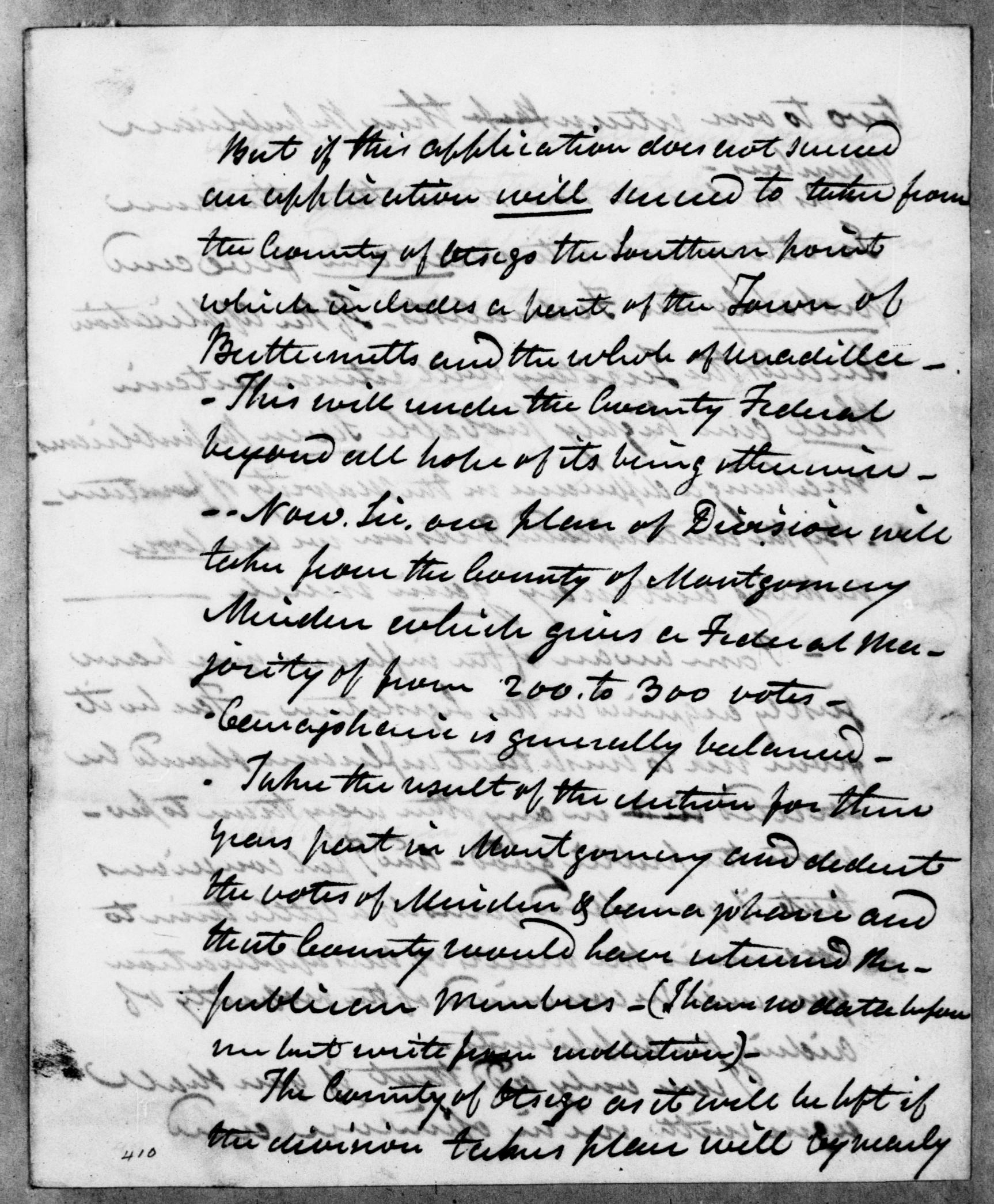 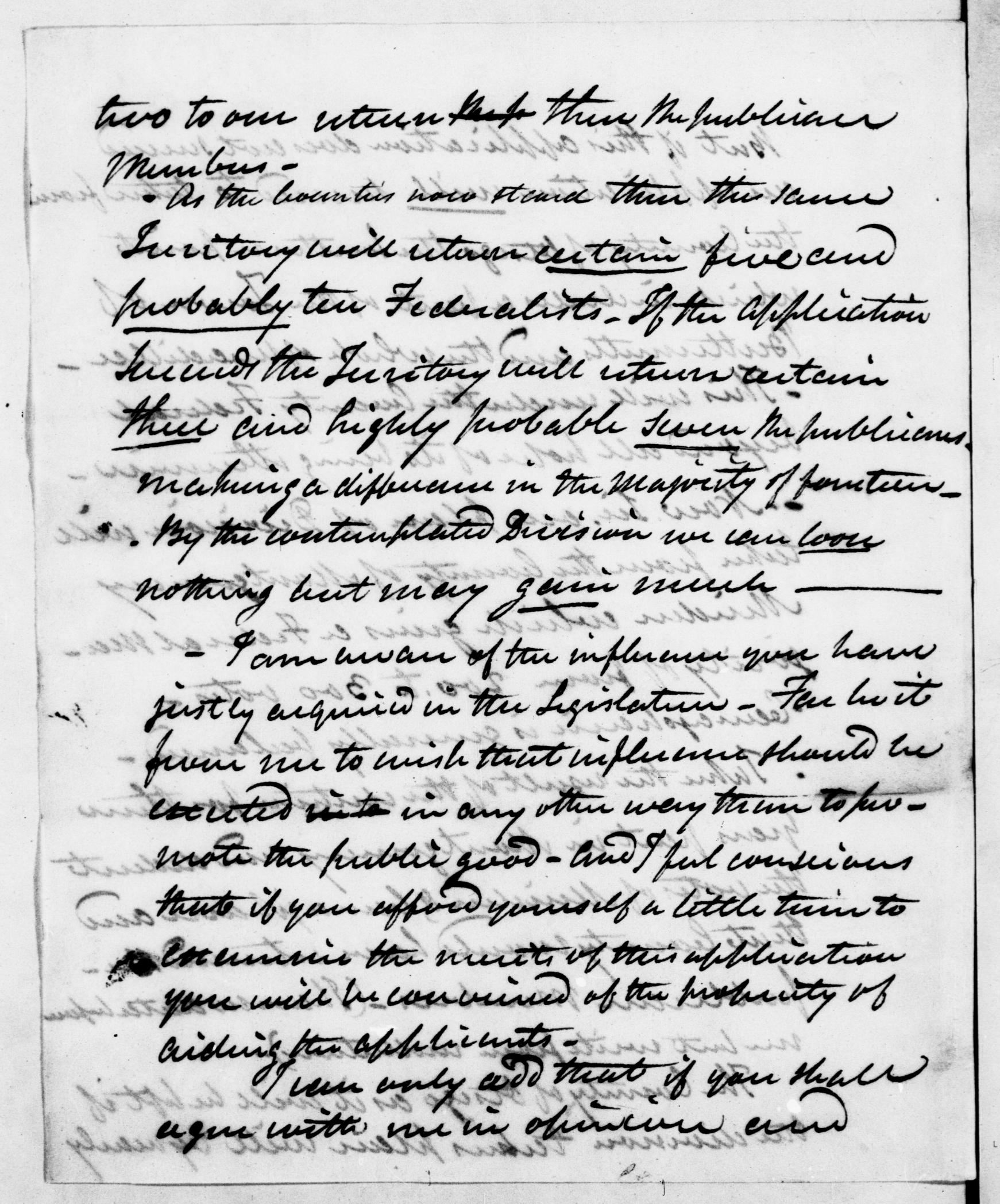 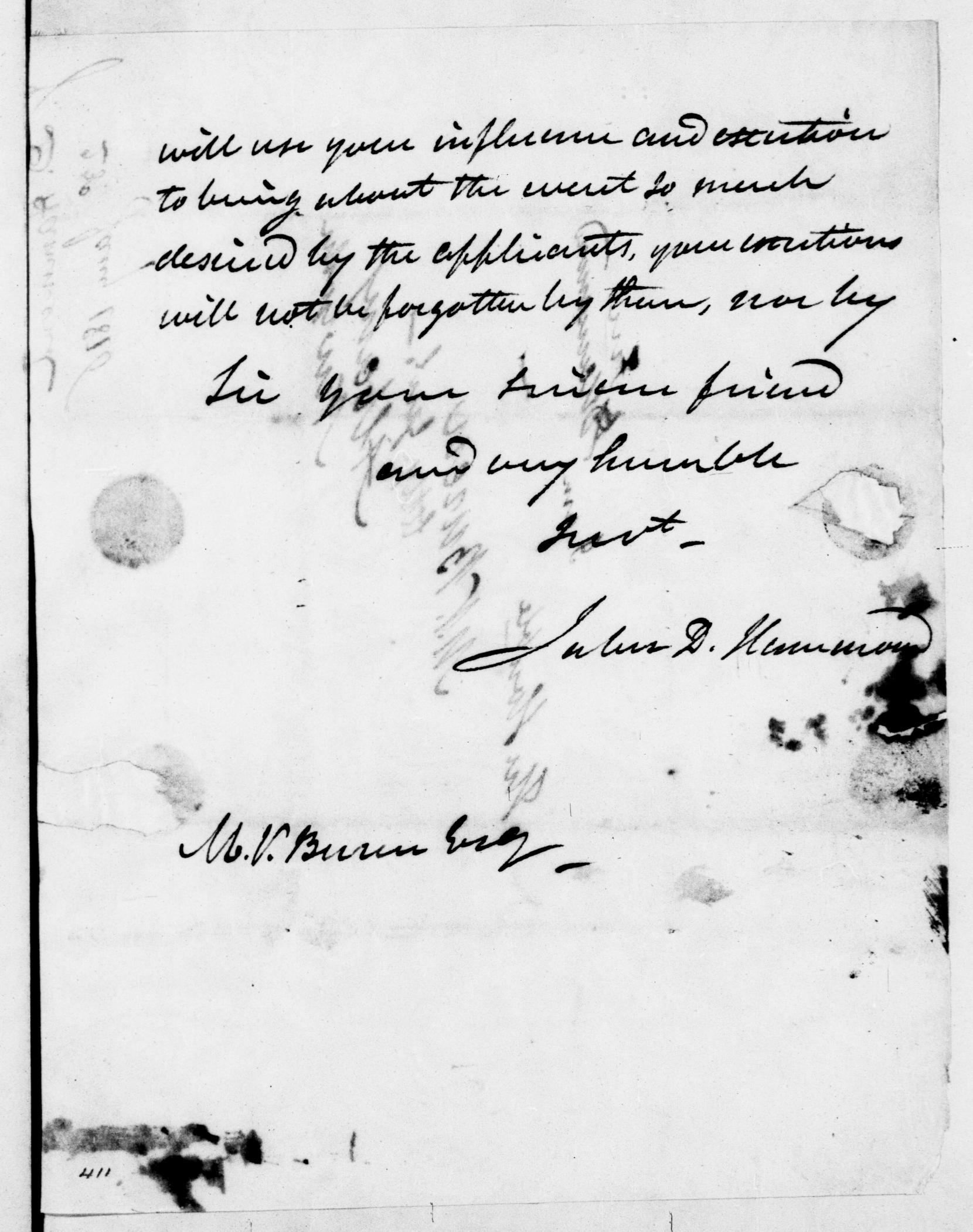 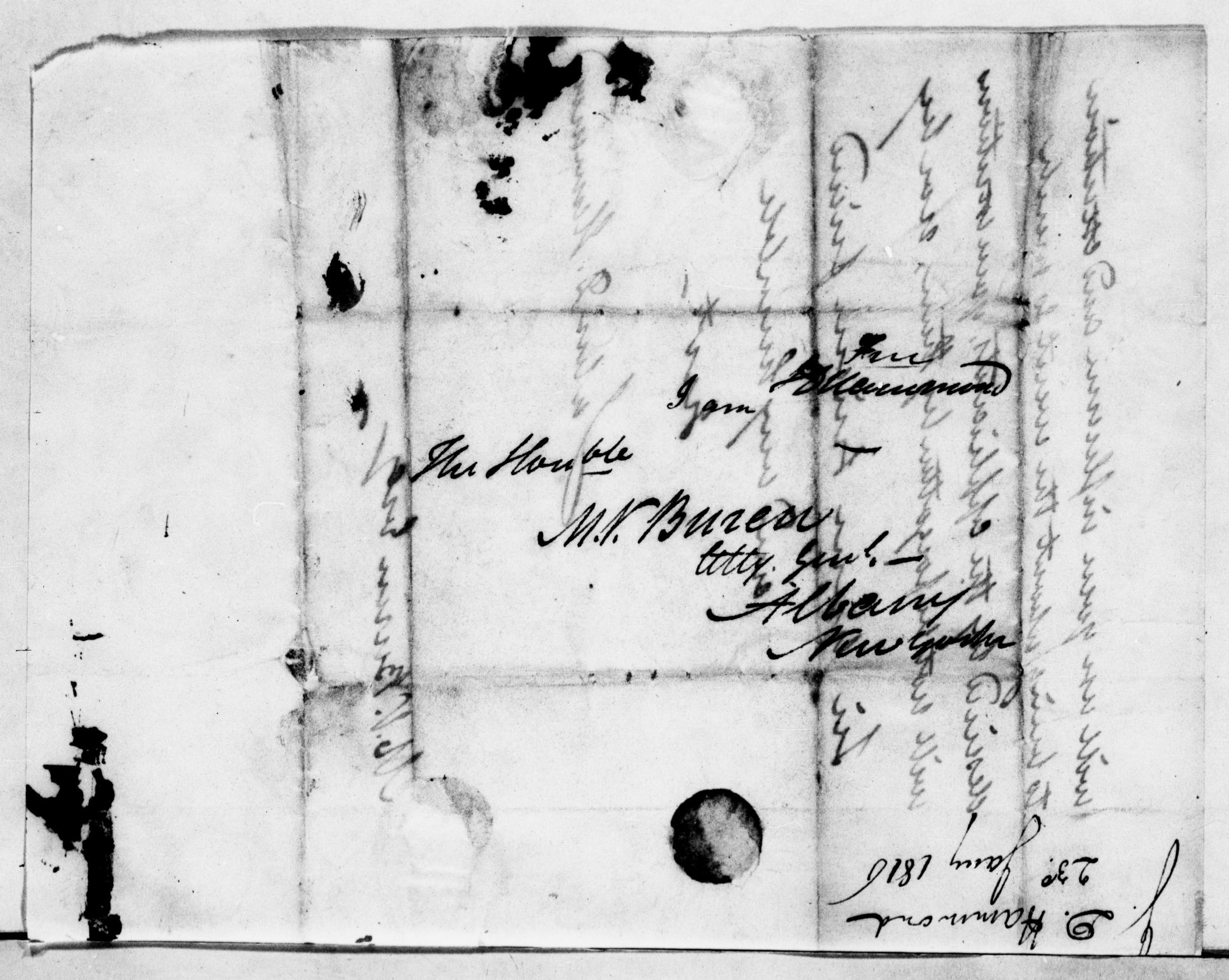