What, my Friend, is to be the state of politics? I do not like their present appearances. If we tie ourselves to the General Administration we shall go down with disgrace. Does Gov. Tompkins & Judge Tayler mean to lend a hand to our destruction and put themselves in lending strings to Madison Gallatin & Armstrong!

If these gentlemen meditate the overthrow of the Clintonian party, whatever may be the current of the day, they will find themselves mistaken. I should not like to think so meanly of their heads or of their hearts. They may rely upon it that the administration of Mr. Madison will within five years, be more universally execrated than any which we have ever had. Republicans will curse the dangerous precedents, which under this their auspices, has been set for succeeding parties—and which will assuredly be followed.

I pass by those decrepit measures which have from time to time been resorted to & abandoned, but which have ended in the annihilation of our Commerce–a series of disgraces, the loss of as many men as we captured with Burgone–and a total prostration of national character. These are evils but they are evils which may be repaired. What I most deeply lament is the awful precedent which has been introduced by an administration calling itself Republican, in relation to the loan. Mr. Madison has exactly copied the British government upon that all important subject[.] He is entrusted to effect a loan, & for that purpose he is authorised, by agents, to sell the stock, without limitation as to price, which is declared to be a valid execution of the trust!! The very plan of Great Britain & which more than any other measure has entailed misery on her people.

Reflect on this subject. A Republican administration under Mr. Madison sets the example of loaning money, by selling the stock, without limitation of price, through the medium of agents—which is declared to be a valid execution of the trust! Already has our national debt been augmented Thirty millions of Dollars. Where will it stop! & are we so mad as not to foresee that future administrations will avail themselves of this foul—this damnable act. Believe me it is the most dangerous wound the Republic has receive[d.] We shall creat a monied aristocracy in the nation which will poison our political principles & horribly oppress posterity.

If it be asked how is a war to be carried on? The answer is plain. If it be a just war, which the present certainly is, & will continue to be, so long as G. Britain refuses to make suitable arrangements with us upon the leading subjects complained of by us, the people will support it. They will pay taxes to maintain essential rights—there is no reason to distrust the People. Be open & honest with them. They will give you a sure & constant support. Moderate loans, which could easily be redeemed & bearing a fixed interest, might occasionally be made. But the administration must be composed of political knaves, which to sustain itself in power would adopt measures that lead to incalculable oppression upon those who are to come after us. It is a fraud upon posterity. Why should we not pay a part of it? It is beyond all doubt one of the most infamous examples which has been set since the adoption of the Federal Constitution, & if not checked may serve to enrich the tools of administration, but will be lamented when it is to late.

The wretches who have authorised the President to effect the loan by means of brokers & sale of it ^the stock^ talk of the oppressive terms in England, produced by the very means they are taking, & yet they do not seem to know that the same causes will as a necessary consequence produce the same results.

Pray let me know whether there be in your circle a man who justifies a political heresy of the nature I speak of. If there be, I am free to declare that in my opinion he ^is^ unworthy the vote of any one who wishes well to the Republic.

My respects to all friends. Write me shortly & be assured

I am most truly yours 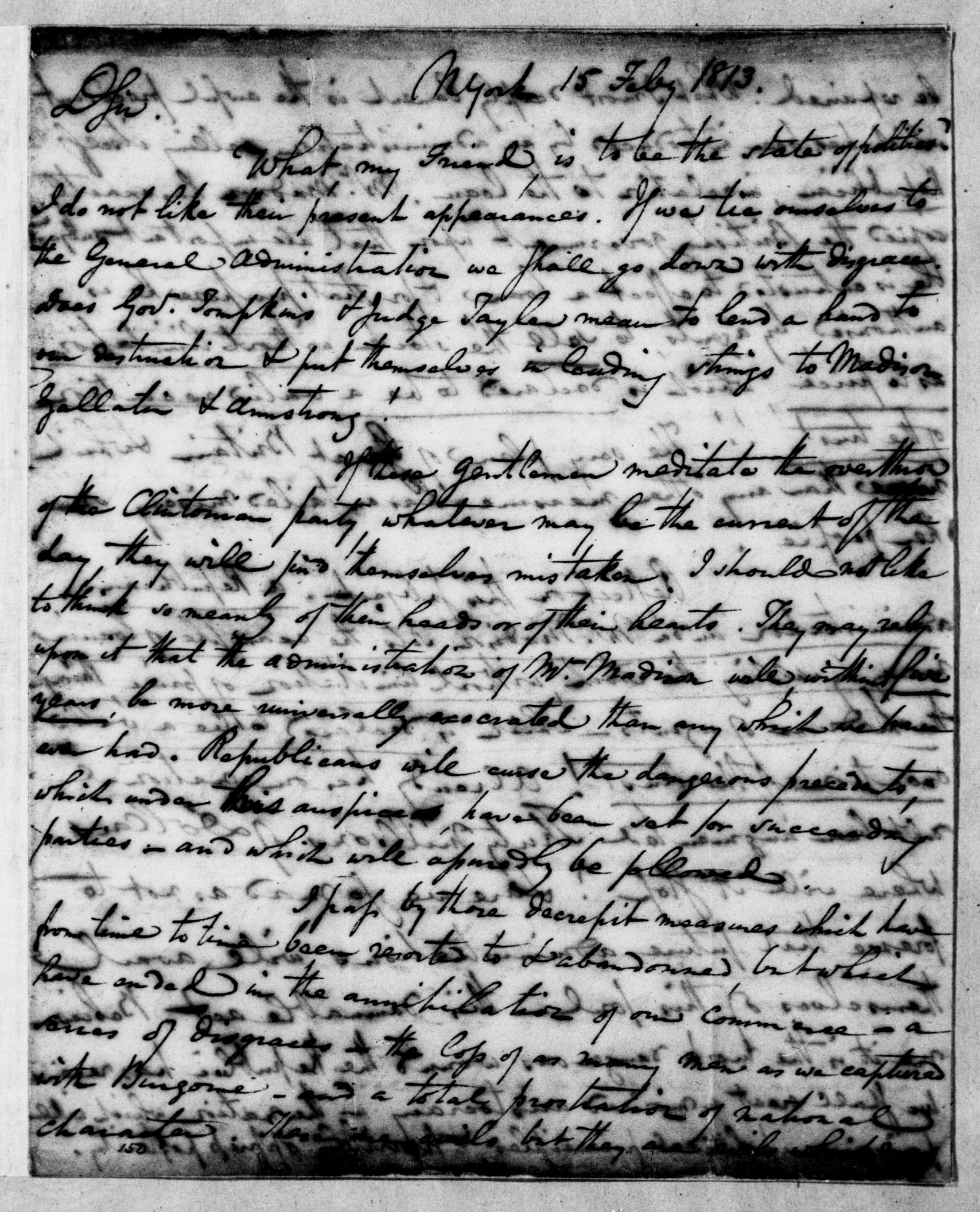 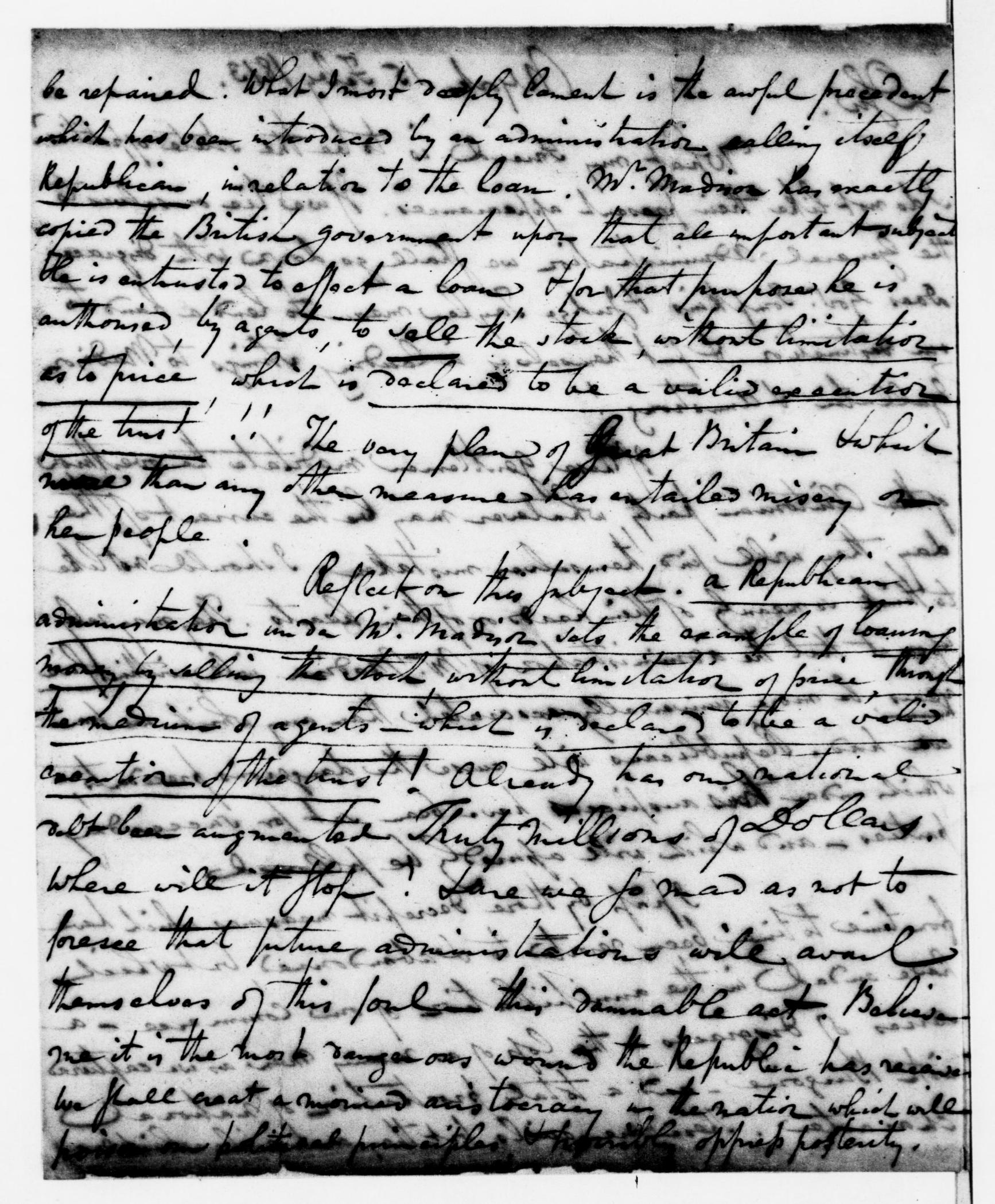 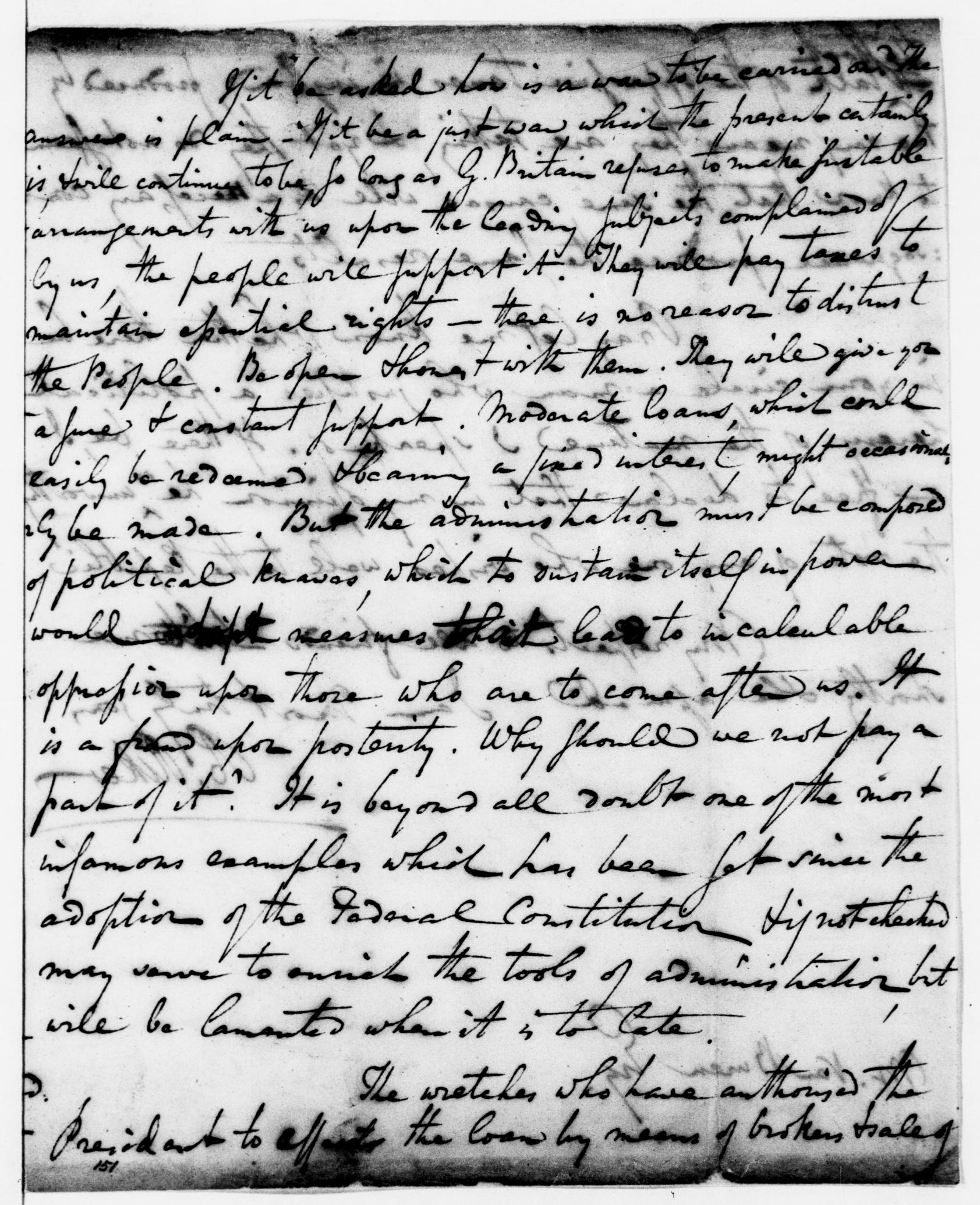 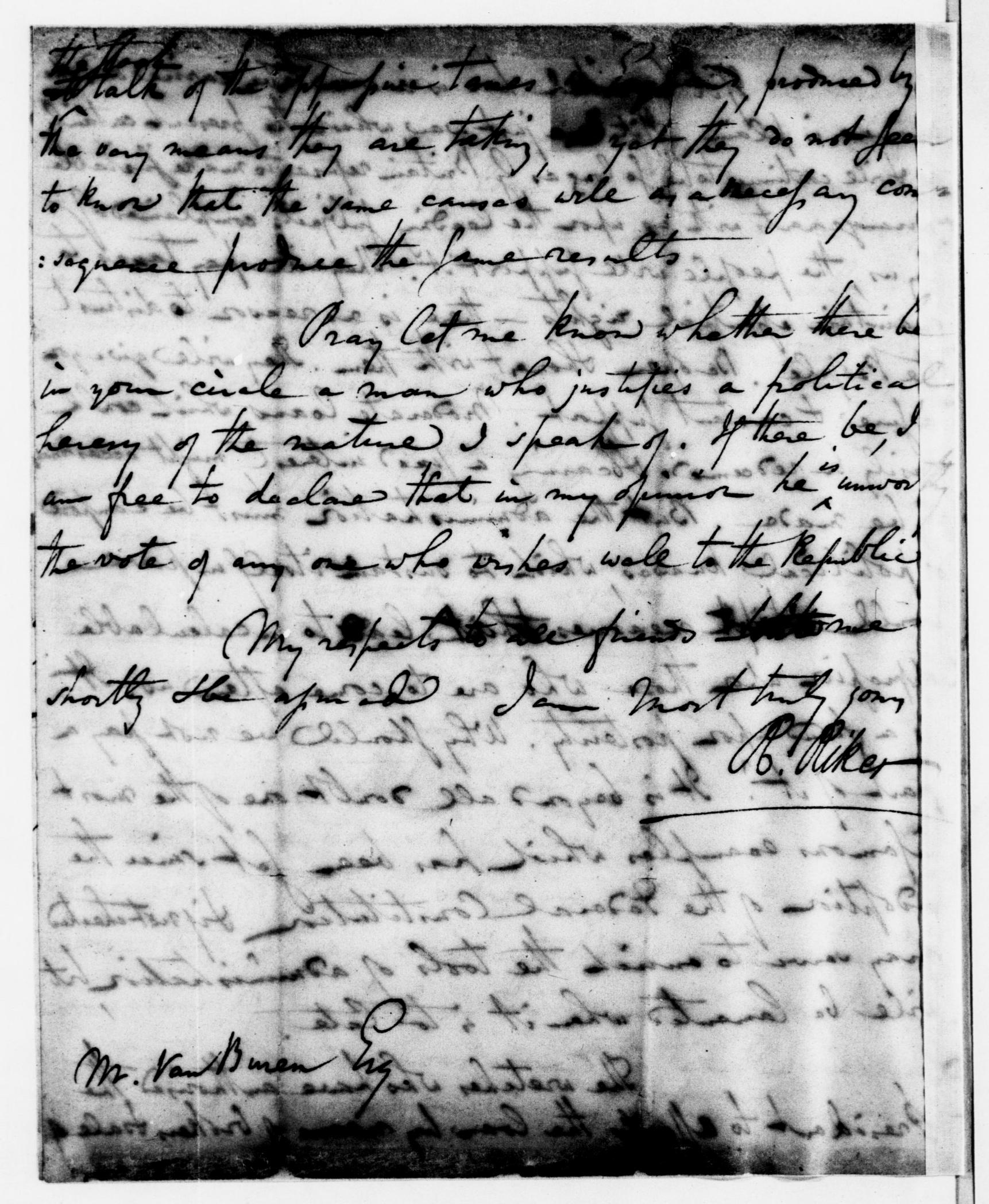 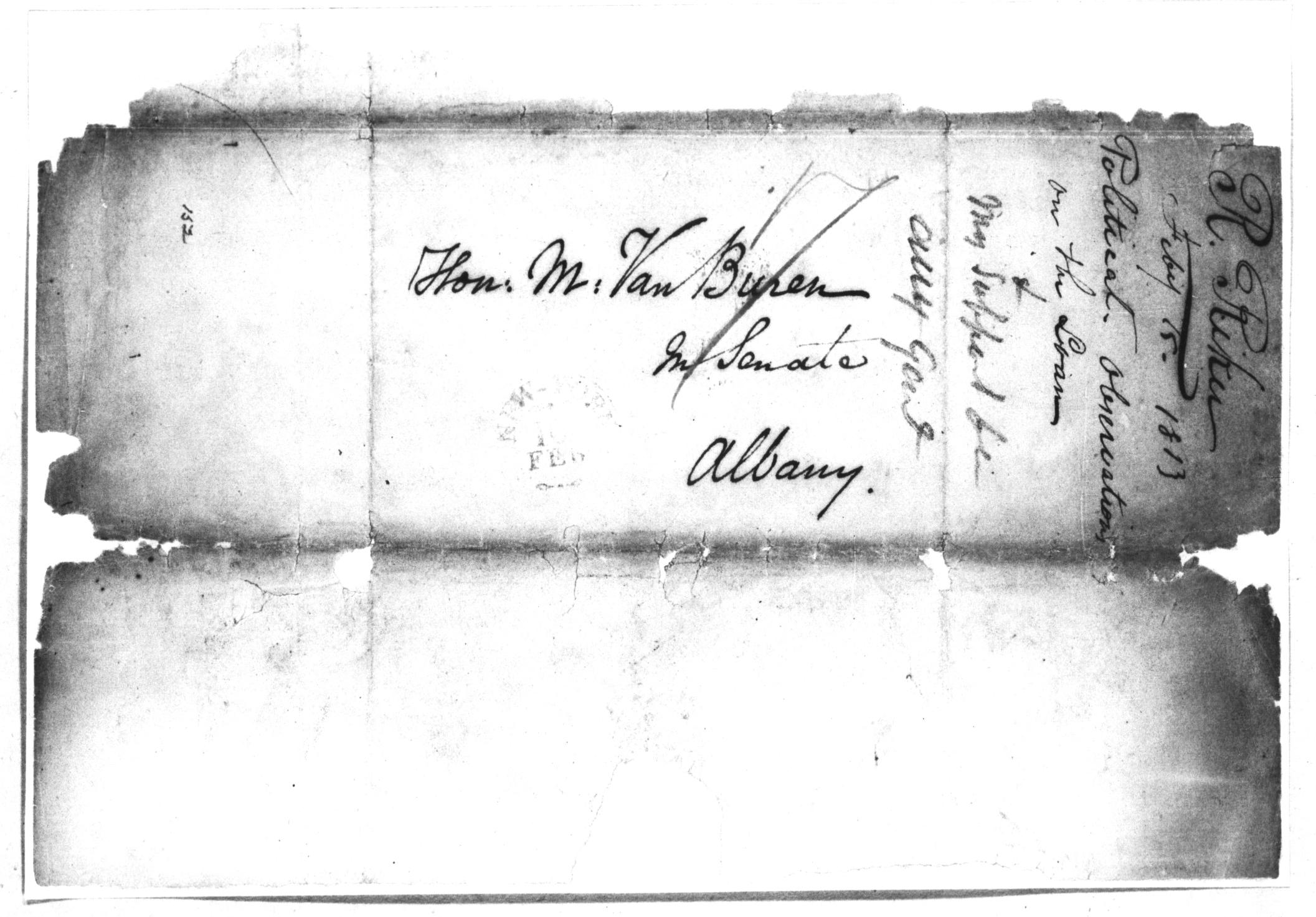