The great service and gratification afforded me by your letter demand[ed] my warmest thanks, and merited my acknowledgements before this. Accident has prevented my writing for two or three days past. You will have perceived that I made liberal use of it, but the writer is not known, and no imprudent disclosure will ever be made by me of a the source of any similar information. I was for some days fearful that you had really sustained an attack of the fever, and gone home to Hudson, until your motion in the Senate proved you to be alive and at your post. I do not readily perceive the object of your postponing the choice of senator. The Martling men hear complain of the want of firmness [. . .] their friends in the caucus, who, they say, had as many votes for Smith as gen Wilkin, all but 3, and then gave him up, ^with all his fidelity and merit^ to the others If tomor[rows] mail brings an account of his ^(Mr. Wilkin’s)^ election, they will be chopfallen again. I am truly sorry Mr. Clinton could not be got to Washington, but presume he is properly actuated under existing circumstances. By the way, I wonder if I am to expect any difficulty in getting paid for advertising the Comptroller['s] Tax List, which I have done well, faithfully and regularly in the uniform and customary way besides sending it once to every subscriber to the Country paper, excepting in Albany.

Do you calculate upon any measures expressive of your opinion on our foreign relations, the war, and supporting the general government, during yo[ur] session?

Your letter of the 2d was duly received today. We are astonished or at least disappointed at the result of the senatorial election, in the shape it ended in. I am very glad you mentioned the blank voting, as the Martling men had begun to lay the fault to the Clintonians, and regret that King is elected, though they said before that they had as lief have him as Clinton, as they considered him as good a republican. We are all in a dilemma, and they (the martlingites) solve it only by saying it was agreed in the Presidential election that Mr. King should be the senator. I confess my regret at the issue of the business, and am more disappointed than I should have been at a dozen or 15 blank votes. All looks dark and unpromising to me. And Southwick, in the meanwhile rages like Etna on every occasion, and will assuredly establish Buel in Albany, besides “estranging” others elsewhere. Who have we to nominate for governor, if Mr. Clinton is hors du combat, and gov. Tompkins must not be the candidate? I am sickened at the prospect, not only of federalism retaining its ascendancy in the state, but of the old Livingston party joined by the Martling men and other malcontents, getting uppermost in the republican party. We must and ought to unite in the governor election per fas aut nefas. The party deserves much credit for their little division on the Senator.

Letters other than mine received here, announce the probability of your having adjourned, and to this city. If this is the case, I shall have the pleasure of personal conference with you and other friends. And you will miss this letter two or three days, as I conclude to send it off, notwithstanding the rumor of adjournment. I perceive the hint about the mayor of this city, in the Argus. What is gen. Wilkin to think of it? Dark and mysterious are the ways of politicians. Heaven preserve us through the labyrinth of difficulties which present themselves. In my mind, a stead adherence to republican principles and men, is the only sure road to safety and success, and I feel quite confident that firmness and perseverance will in a year or two bring us upon commanding ground again.

The republican votes for King is a terrible pill for the Madisonians here, as the impression seems to be ^unavoidable^ that their friends must have given them.

I was twice interrupted last evening with this, letter by Messrs. Barker and Havens, to calculate and contrive about those d—d votes. We make out 5 rogues, and their paper is dumb as a stockfish today about them.

It is now February 5, and this mighty epistle, the vast labor of three days, shall be finished, for fear of further delay, with a word or two more about friend Southwick, who rages to horribly in the majesty of his wrath, that we shall be obliged to oppose or at least disavow him if he does not desist; and conform more to the interest and policy of the republican party.

Again I request your acceptance of my thanks for your communication.

With great esteem, Yours 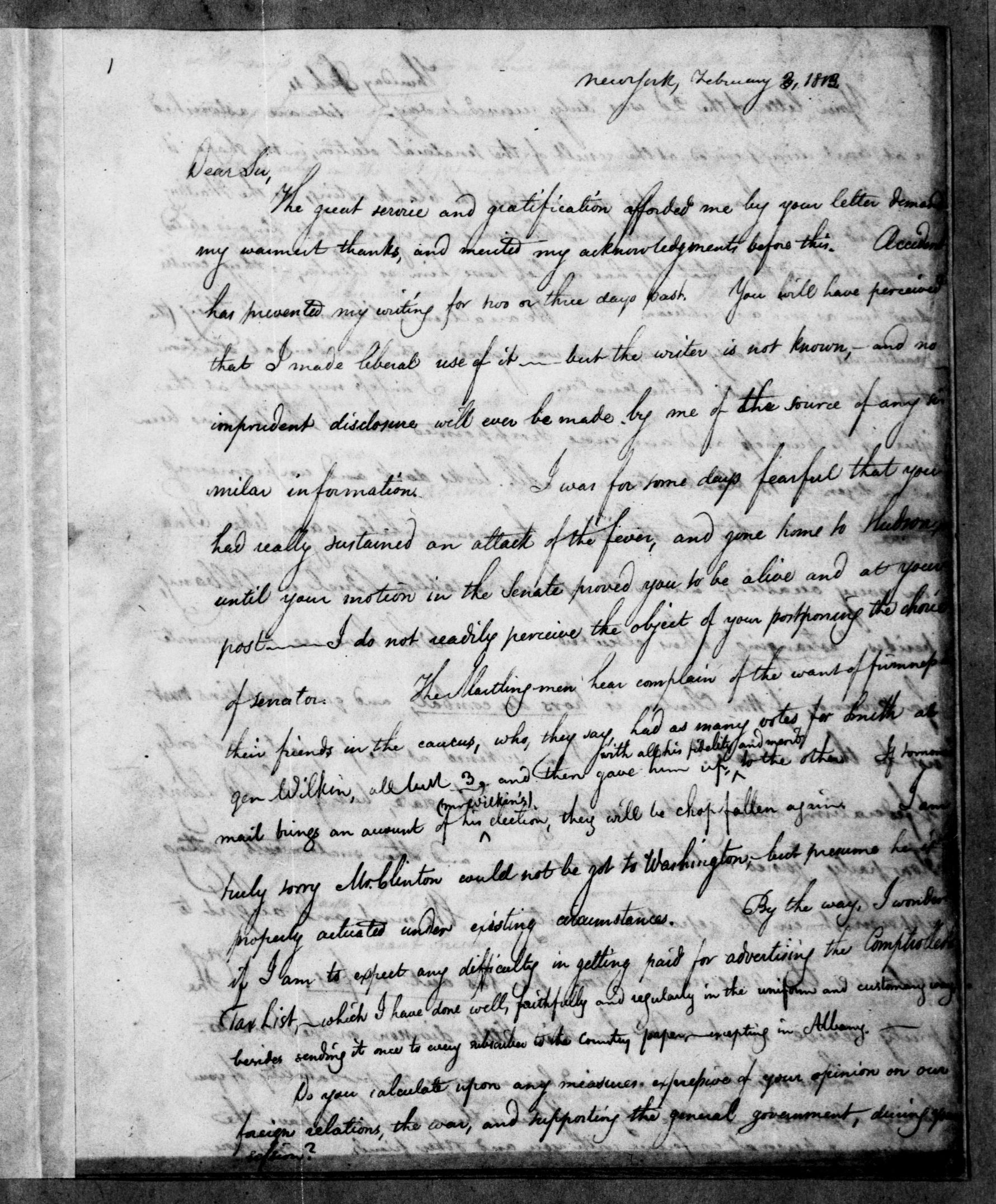 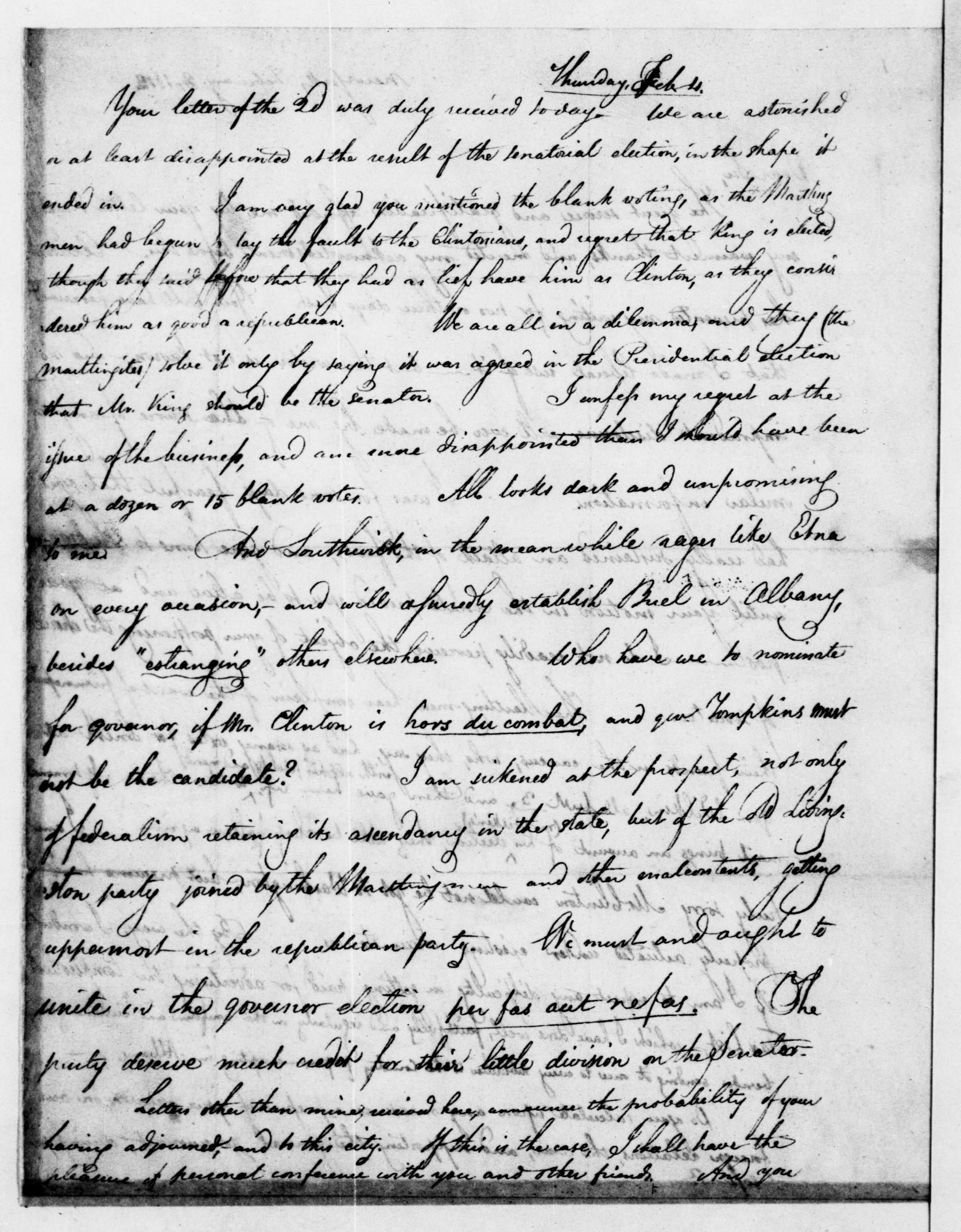 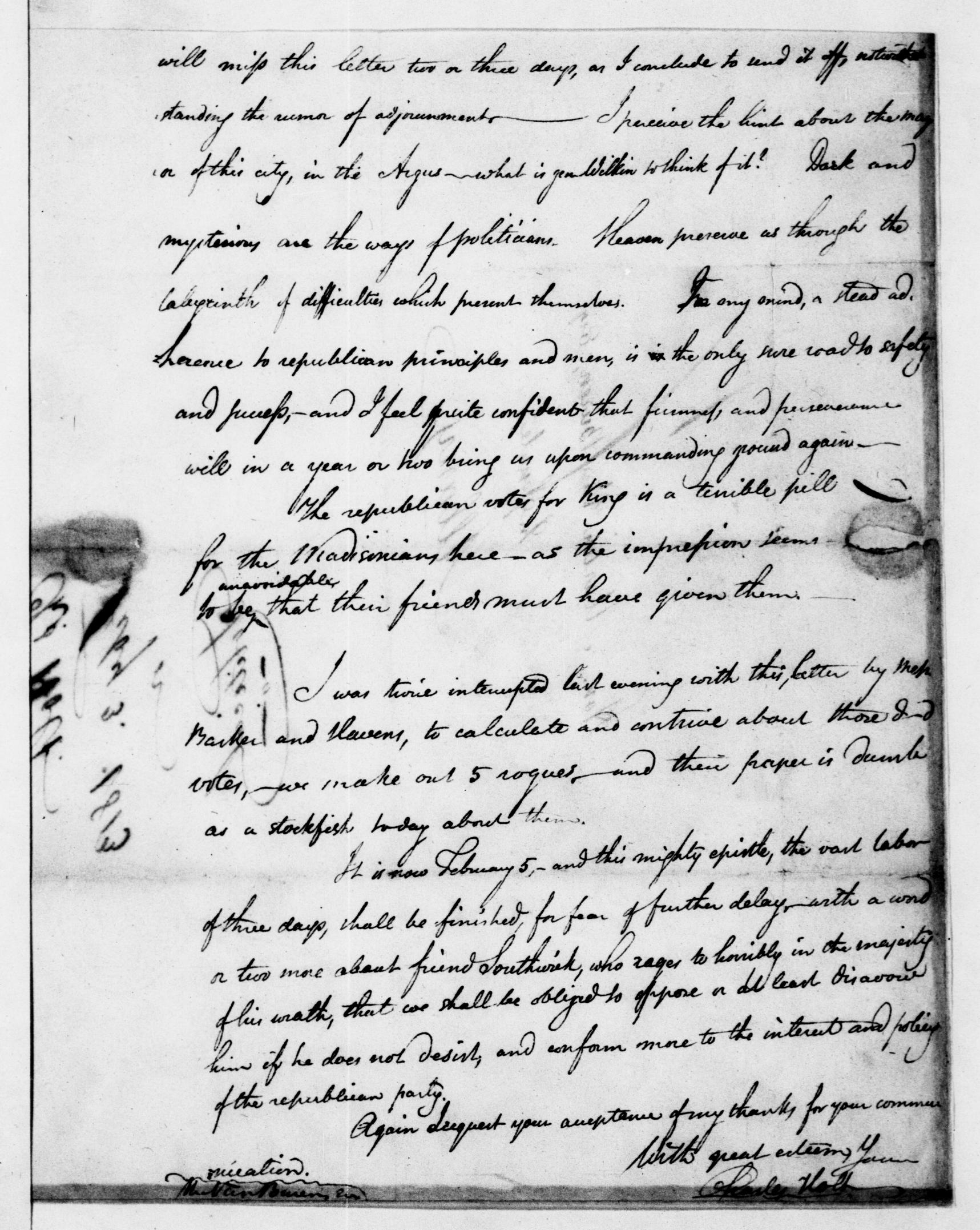