Your last epistle on the subject of Newyork politcs has served ^only^ to add demonstration to my previous conviction that you are totally and deplorably ignorant of not only of Mr Clinton (I mention ^him^ first out of compaisance to you) but of the State, her political Interests and the Sentiments and views of her citizens, & that when you meddle at all with politics you are so wholly ^as I have frequently told you wholly^ out of your element as to raise This ^blunt sincerity^ may not flatter your vanity but that I the a question as to the strength of that mind which powers ^am of which not bound to do you good alone is^ are on all other occassions assented to by all ^what I wish to promote^ a man to be ^a^ sound ^a^ politican & in any degree usefull to his country must be governed by higher & steadier considerations than those of personal sympathy and private regard. I will not suffer your unmerited censures or the kind reproaches of your "Intelligent men from all quarters" who most ^have^ most ^so have^ kindly & magnanimously taken our political interests into their secure keeping, to drive me to say of Mr. Clinton what his poltical demerit would abundantly Justify. His fallen f and falling fortunes are calculated to excite other sentiments than those of reproach or exultation & the man who ever for a moment entertained the Idea, that in the opposition which I have ben constrained by an imperious sense of Duty to make to him I was actuated by a single inducement of a personal nature or that I ever ceased to regret that his political infidelity had lead & was leading to the prostration of his personal weight & influence in the State, knew nothing of me or my views.

I have always supposed that an other distinguishing trait of a good administration is that it rallys round the governmental standard the good the virtuous & the capable. Now it is a fact too palpable that it dare not ^to^ be denyed & ^which^ is virtually admitted by yourself that so far from that being the case with us, there is not an Instance on record in which any administration has embodyed in its support so great ^a^ number of dissolute, abandoned & broken down politicians as that with which according to you we are blessed. But I have done[.] I have violated the resolution with which I commenced this letter already. It is not a pleasant subject to me & once for all I must assure you that foolish, wicked & deluded as you & your "intelligent persons" may suppose us to be, we have resolved irrevocably disso resolved to drive from power the present ^state^ administration & all its supporters ^aides & abettors^ & that ^that^ resolution will be carryed into complete effect is certain as fate ^that^ whether strangers may wish or suggest we value too highly the Interest & honor of a State of which we are Justly proud to be Citizens, to sacrifice them to courtesy, sympathy or any such feeling. We now have for the first time in twenty years ten years all our enemies in front & we will give them such an overthrow ^and after that & pursue such a course^ that our own neighbors will not hereafter be heard in speaking of our State be heard to say ^that will give to Newyork her due weight in the union and silence the calumny^ "That her wide walks encompass but one man" under whose "huge legs" we should "peep about" to find ourselves dishonorable graves."

You must not for a moment think that any thing you have said has cooled the ardour of my attachment for you, that is impossible. It is built on too solid a base to be so easily shaken. The beam is your eyes & you are searching for the mote in mine, there lies all the difficulty.

The council have been all Write me often, make my best respects to Mrs. Worth and believe me to be your

NB. your friend Dudly will succeed for the Senate over your friend Jenkins Remember that this is for your perusal only 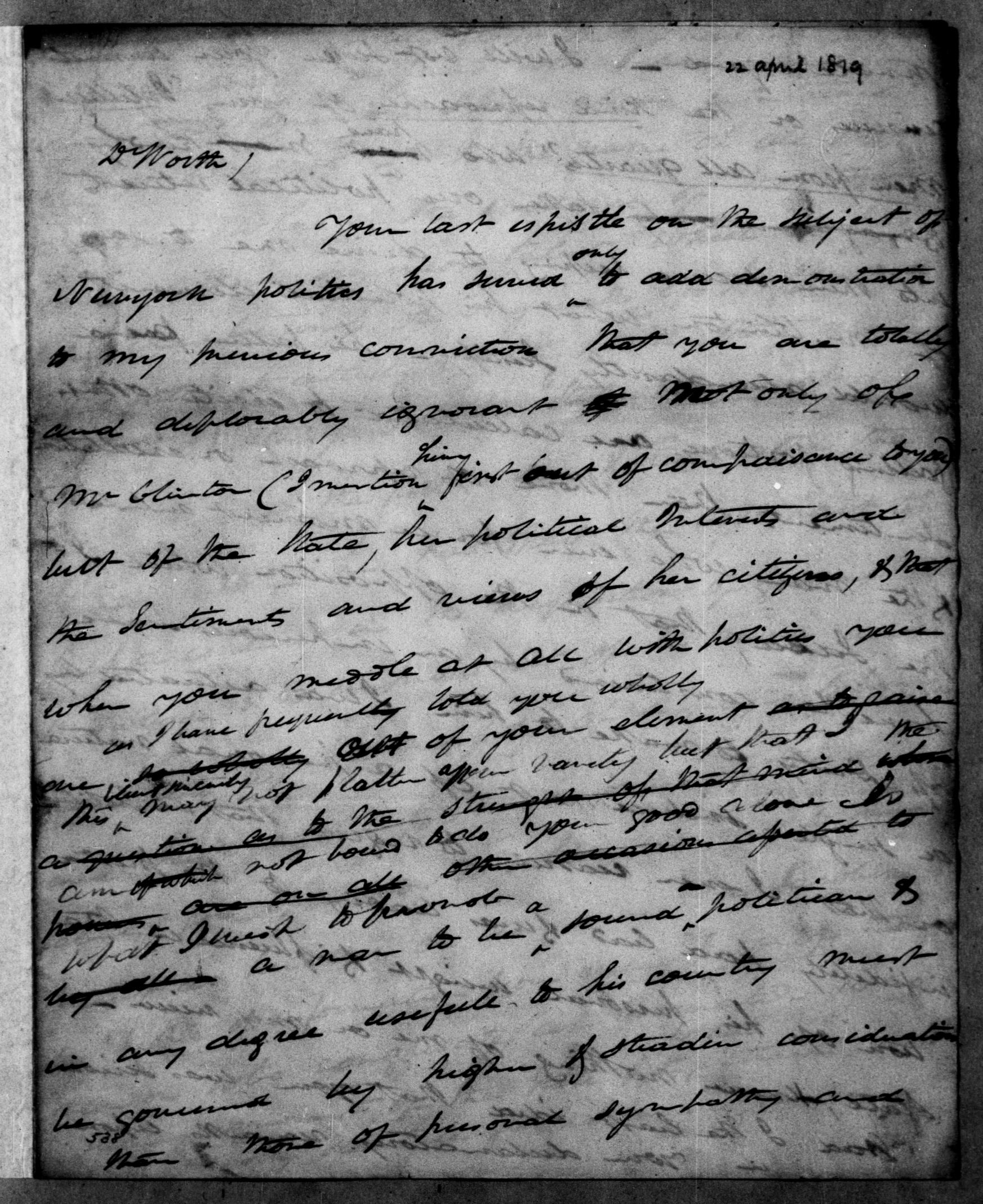 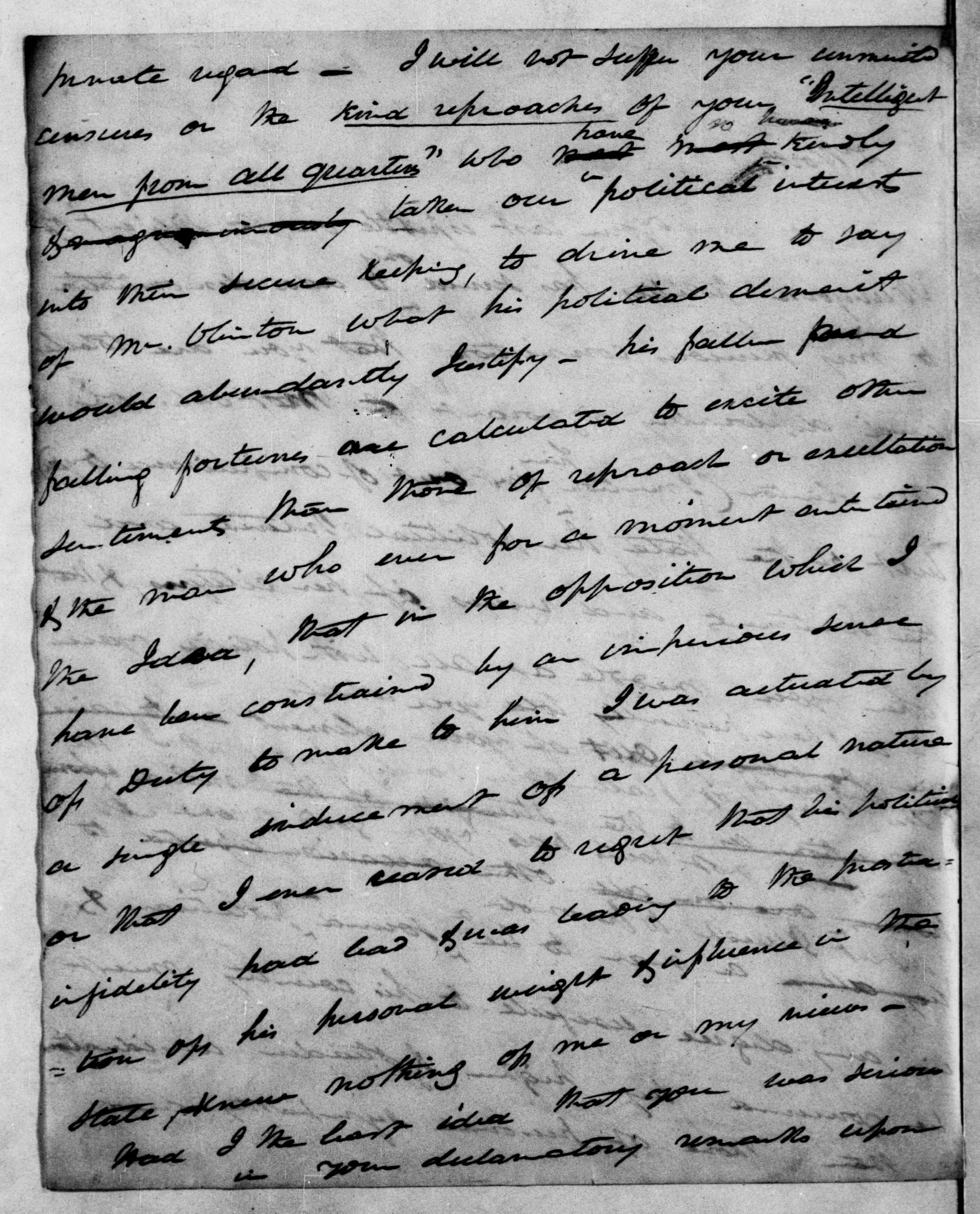 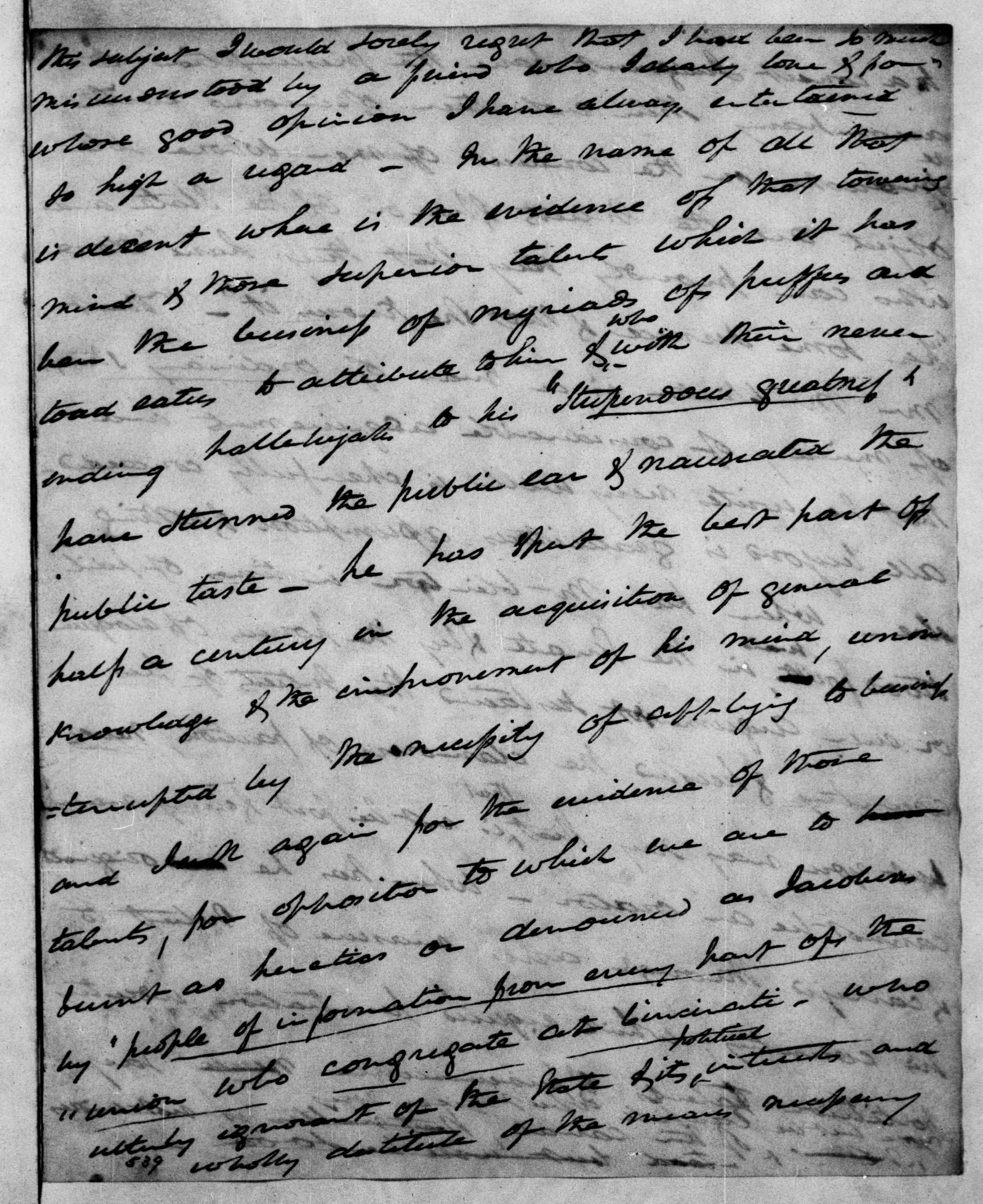 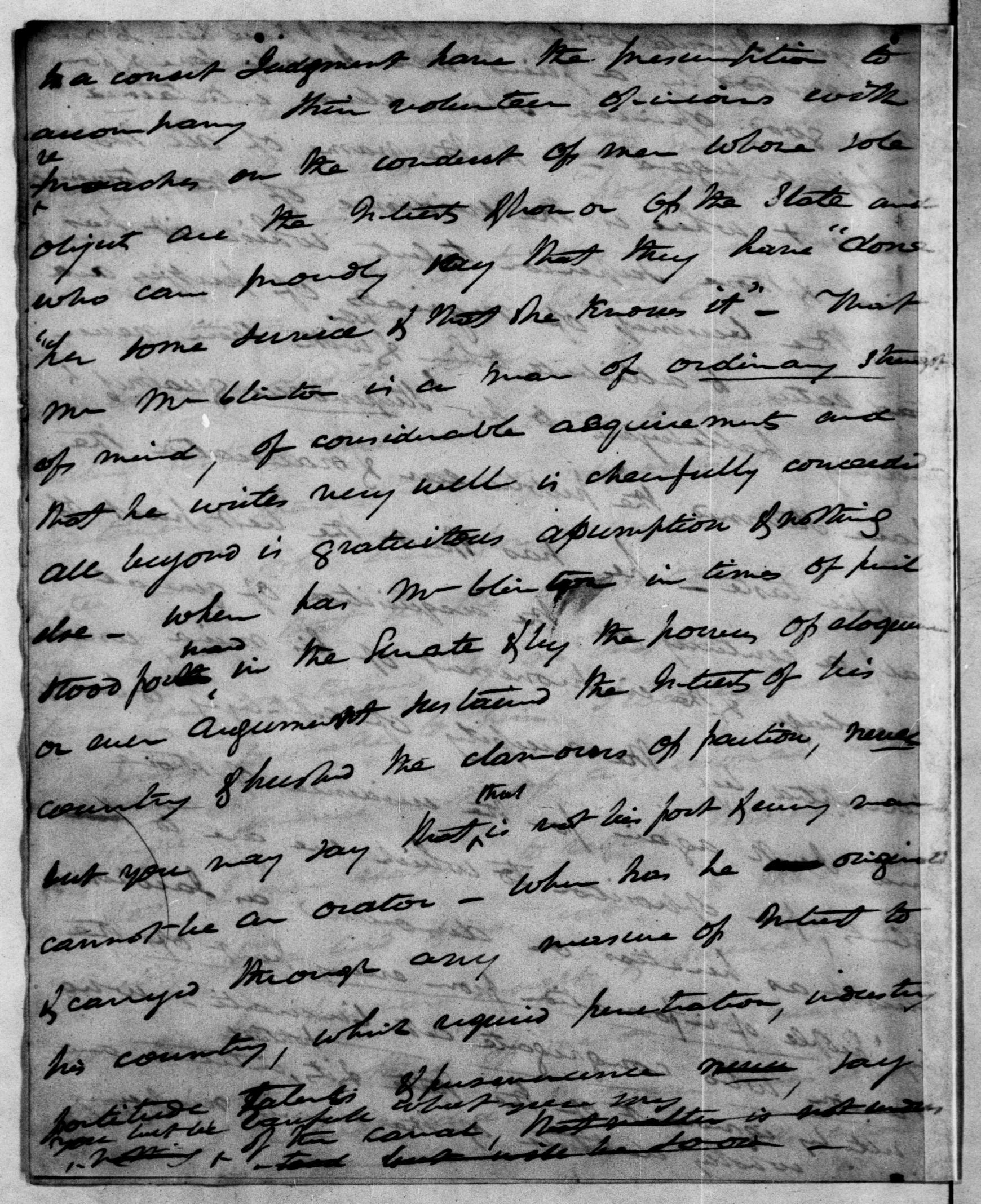 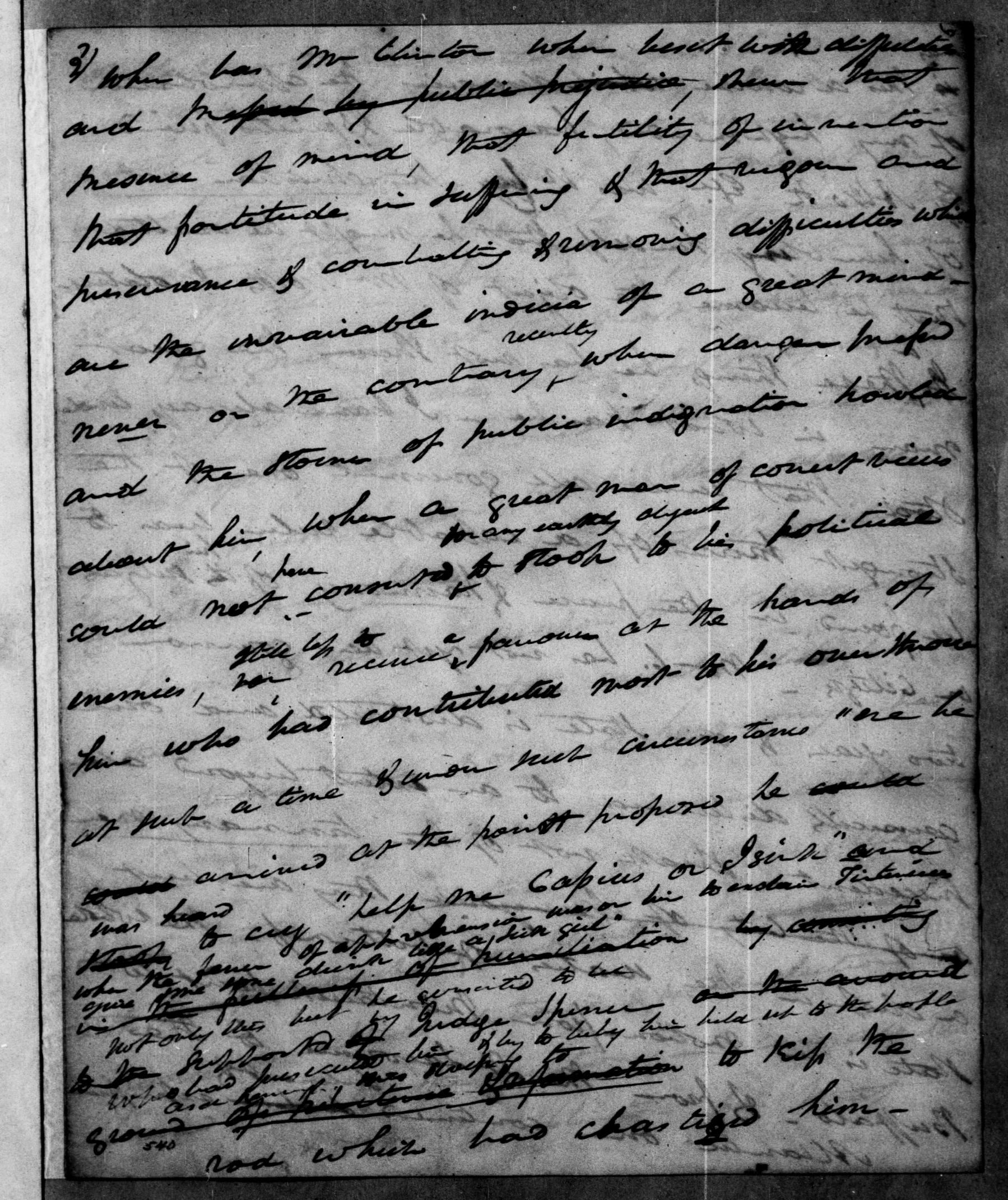 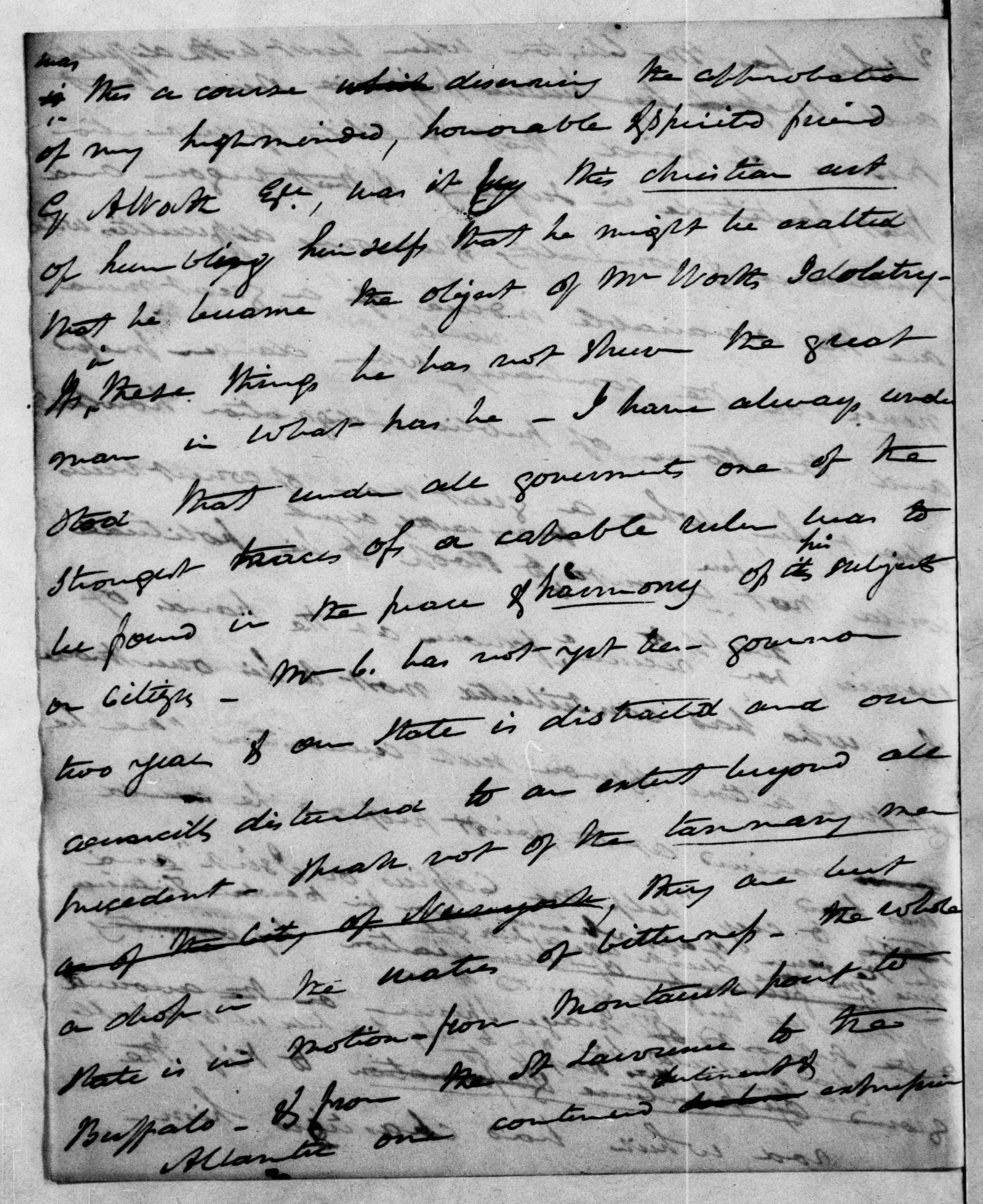 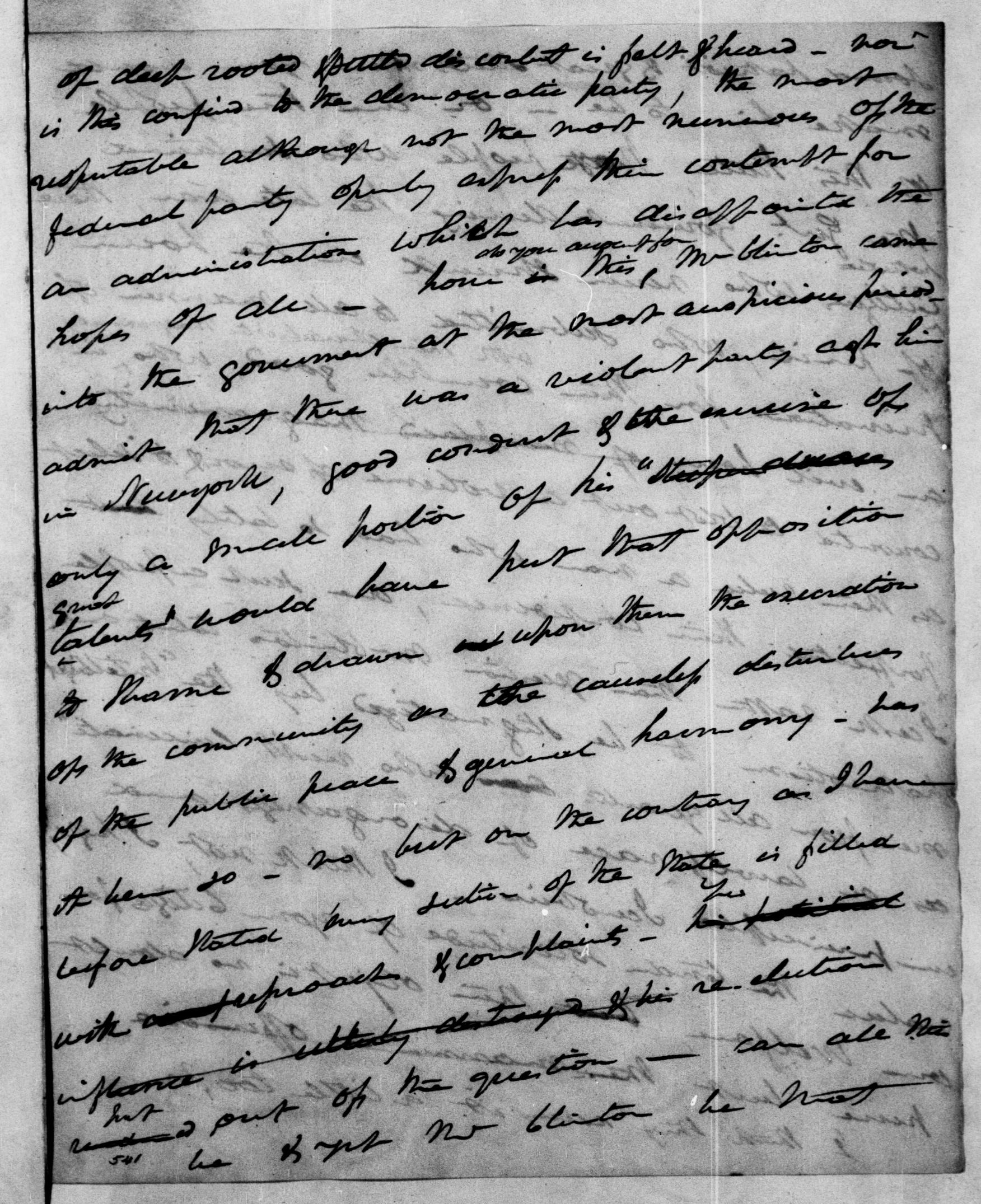 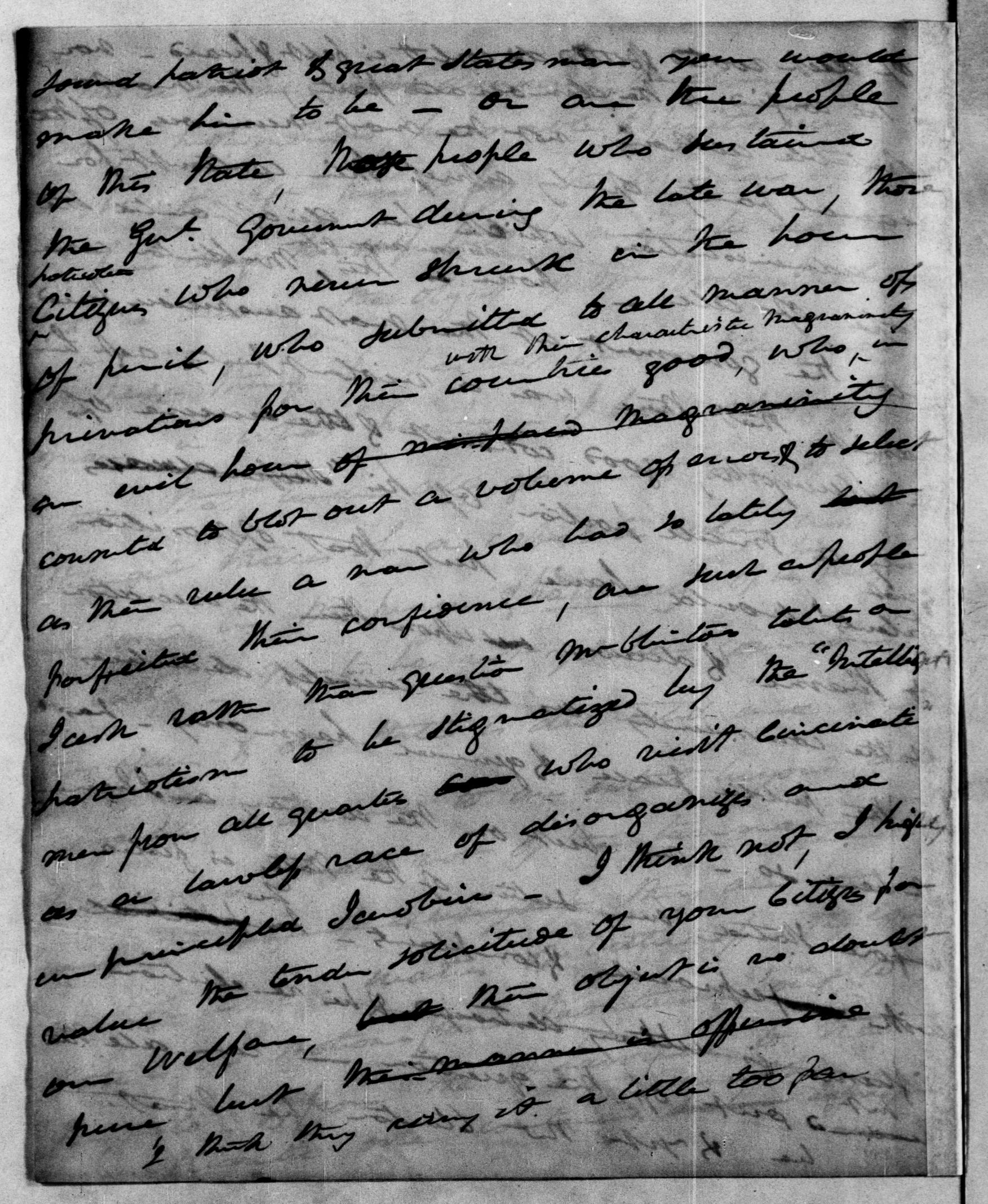 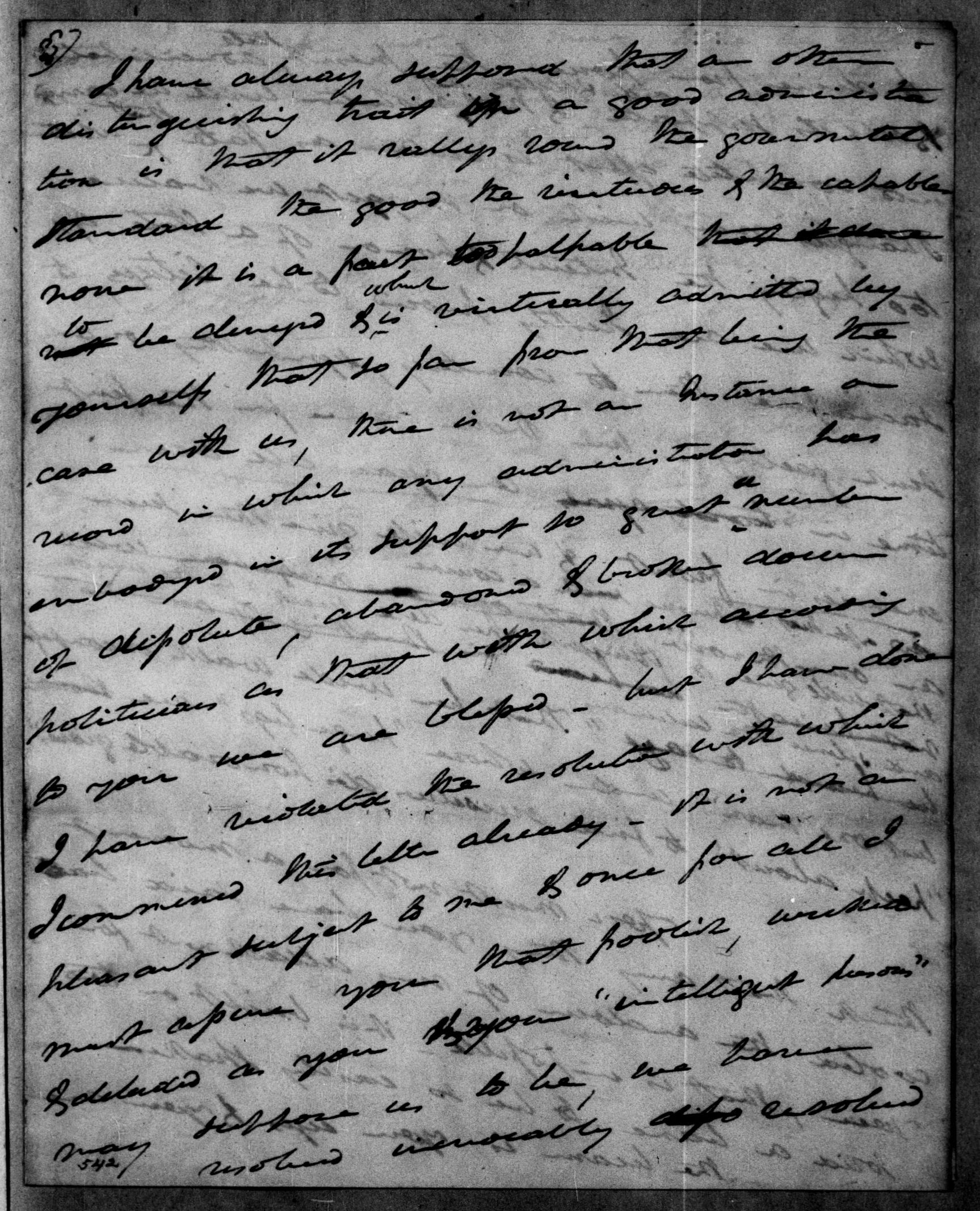 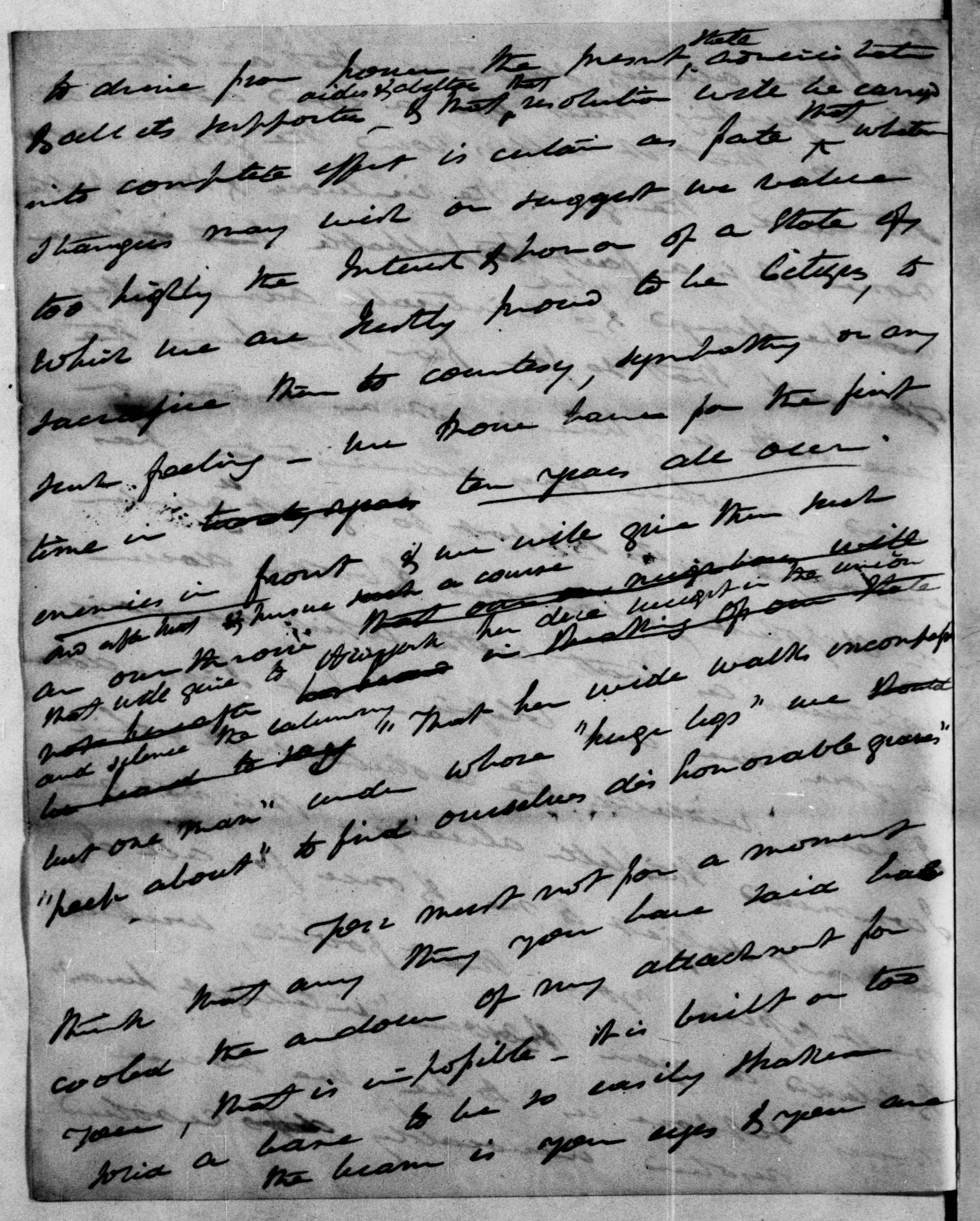 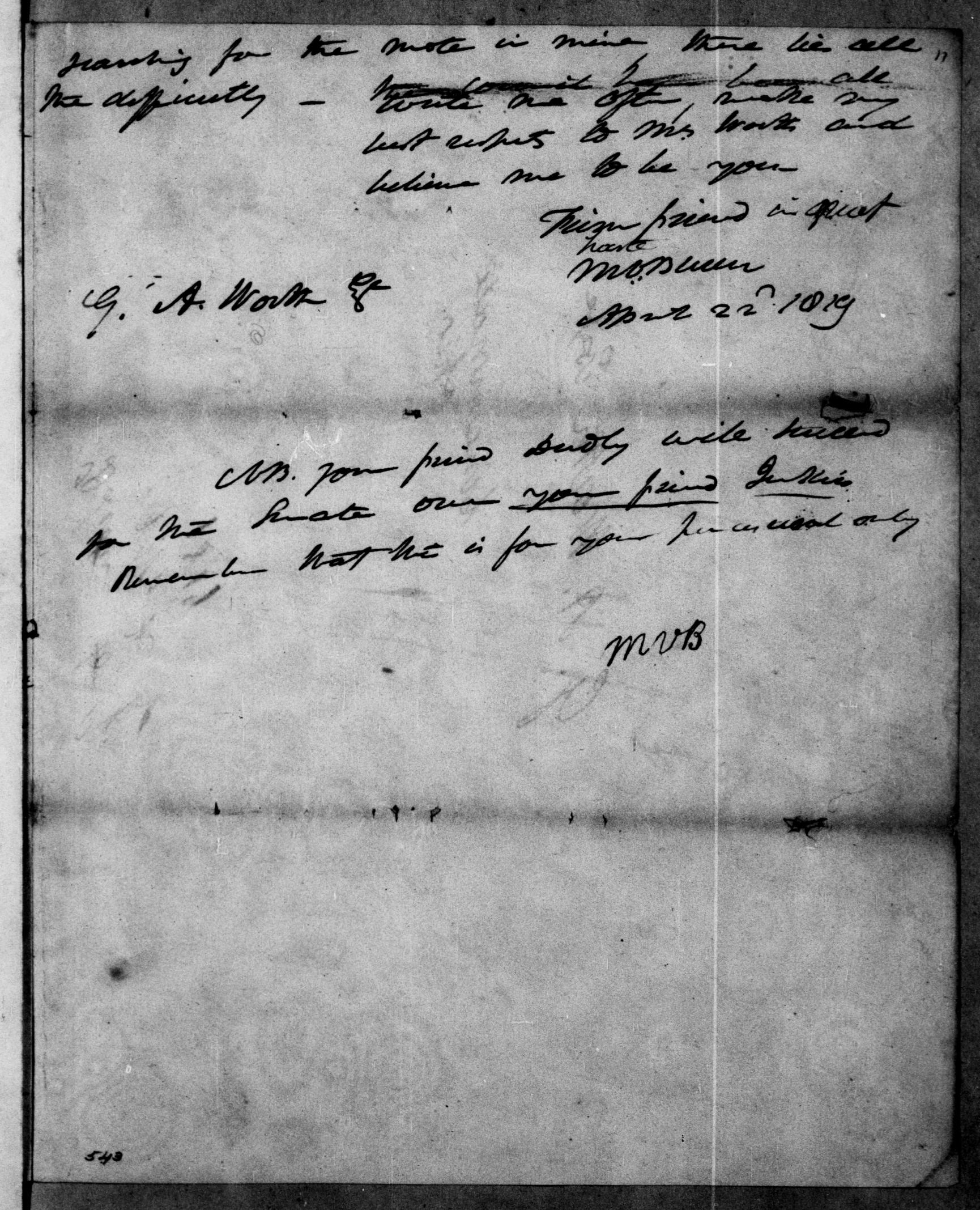 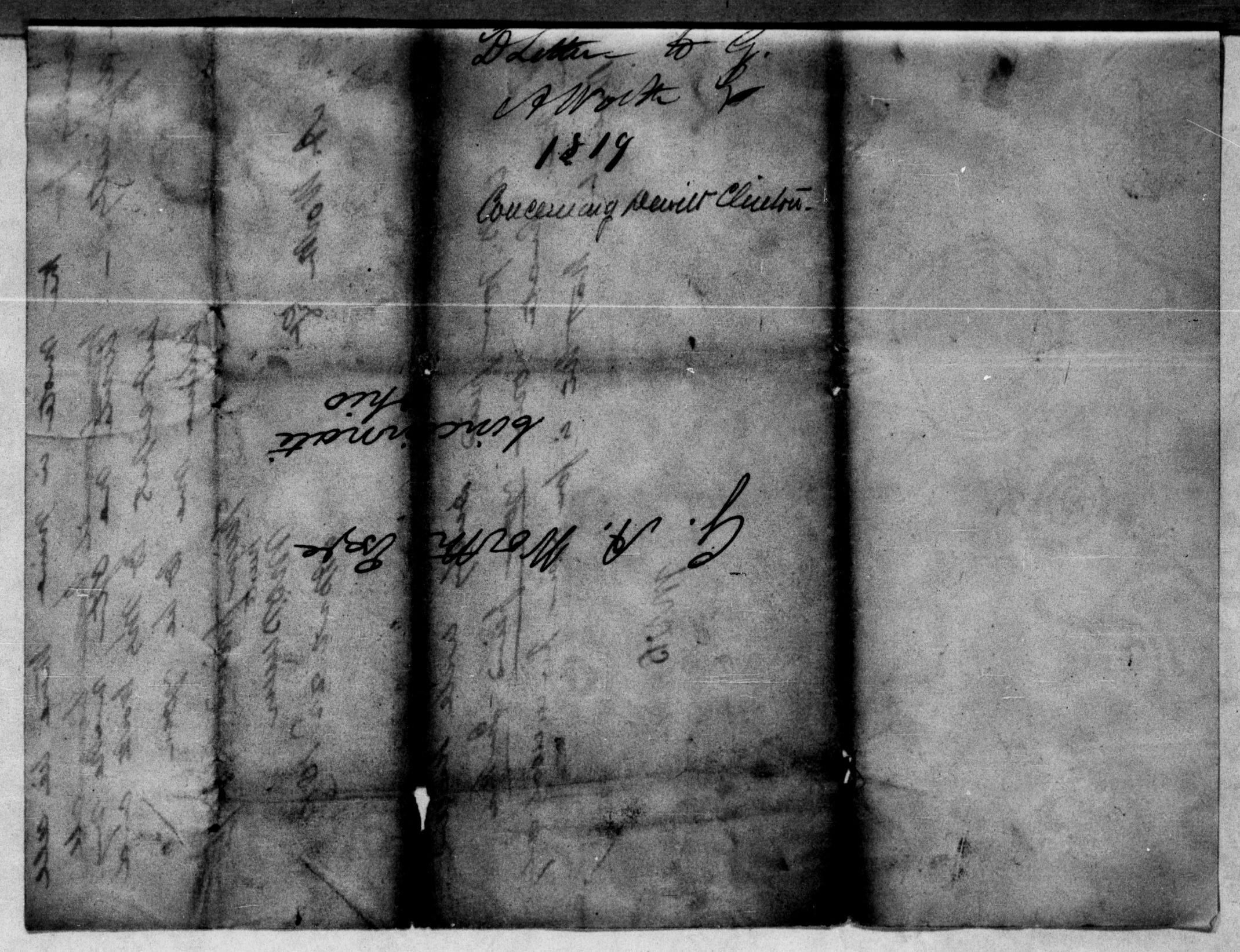