I recd. your letter last Eveng whilst on the wing for this place.

In that spirit of entire candour which has hitherto ^& ever shall^ distinguished, ^& ever shall^ our intercourse I must say to you that it has caused me not a considerable embarrassment, and not a little pain. If any honest and unbiased Democrat in the U. States was ^had been^ asked in view of the ^circumstances^ of the late contest ^election^ from the nomination at Baltimore to the close of the contest, how the new cabinet ought to be formed, his first reply would that what has hitherto been universally regarded as the first office in it <the> <world> ^might^ with entire propriety be taken from New York. Such I infer from the explanations accompanying your offer of the Treasury Department to Mr. Wright as were your own first impressions Yet we could well consider that the condition of a great public question & the supposed adaption of individuals to deal with that subject ^it^ might well render it expedient & due to yourself to locate that officer elsewhere & therefore very cheerfully acquiesced in the suggestion of your letter to select the second place from here. But to find now that the selection for this state is reduced a ^lower^ point lower presents the matter in a very different light to those with whom a just state pride is stronger than the love of office, or the desire to obtain ^possess^ it for their friends. Still if any other state ^had^ happened to possess an individual so greatly superior in the proper qualifications to any which this could present as to make it due to a paramount regard to the public interest to select him we of New york would not have a word to say agt. Conceding everything to Mr Bancrofts capacities & admitting as I do that his appointment to the Cabinet affords me the greatest pleasure, still it is very certain that the decision cannot be put on that ground. But we are not left to conjecture upon this point as the statement contained in your ^letter^ clearly shows that it is a concession to a selfish influence, proceeding from other quarters & directed agt. New York directly & exclusively, & controuled by considerations which are easily understood but which you ^yet^ felt it your duty to make to ^in the hope of^ avoiding the evils you describe. To <rather> give to the moment its most mortifying aspect it farther appears that this movement ^it^ has recd its most efficient impulse form the same Indiana Delegation, with portions of those of Illinois & Michigan who were the first & busiest actors in the field to unsettle public opinion before the Convention, & most active ^also^ in promoting a nomination which would have overthrown the Party ^& which was would have been made^ if Newyork had not promptly cast aside her own preferences to defeat ^it^ & thrown her great weight in favor of the movement which finally prevailed, & which she subsequently contributed so largely to make effectual. To a man of your sagacity & sound judgment it cannot in view of these considerations, when <illegible> <illegible> <illegible> ^duly considered^ be necessary to say that without even the knowledge of this latter circumstance, & most certainly with it, the honest hearted Democracy of this state will feel their pride greatly severely wounded, & the recollection of past events painfully <illegible> revived. Nor can it be necessary to say to you that those who give their sanction to such a state either by advice in its execution, or by their ^more direct^ agency in carrying it out assume an undesirable & hazardous responsibility.

You would will not I assume my dear Sir, for a moment, do me the injustice to suppose that I say this in a spirit of personal complaint agt. your decision, or suppose that I look upon your decision as evidence of a want of friendship on your part for Mr Wright or myself or a want of respect for the Democracy of this State. I am bound to say that too much has in my judgment been yielded to those who deem to look upon our State with an evil eye. I have at the same time the deepest conviction that you have done in the matter what you conscientiously believed to be for the best. You need no assurances to satisfy you that personal feelings or personal interests have had no weight with us. Mr. Wrights & my own communications to you afford you abundant proof of this. You will recollect that I informed you in my first letter that Mr Wright by allowing himself to be put in the breach & by which <illegible> the election was secured had drawn out an opposition to his administration, for the moment form not a little formidable but certain to go down in a very short time. What those who compose it have done in regard to pressing the selection of any individual upon you for the Cabinet I cannot of course know, confident only that they would not be likely to bring forward anyone who would be choice of Mr. Wright or his friends. But we both know that no one has been pressed upon you by either of us. So far from having personal objects it is a fact that until this very day Mr. Flagg was never informed, directly or indirectly, that either Mr Wright or myself had recommended him to you for any place, & I know that all the feeling either of us entertain upon the subject, beyond a sincere desire for the success of your administration grows out of our desire that neither the character, pride, or interests of a state to which we both owe so much should suffer by any act of commission or omission on our parts.

Thus much for what is past & what we clearly perceive cannot be undone. Our course in regard to what remains to be done will be regulated by the same feelings which have forged it from the beginning—viz those of a deeply seated solicitude for your success in the truly difficult position in which you have been placed & <illegible> a readiness to make all proper allowances for its embarrassments, which I <at> <least> can justly appreciate from actual experience.

There is not a better man in the state in all respects than Judge Sutherland, but my dear Sir the state of his health is such as to put it entirely out of his power to attend to the duties ^of the office of Secy. of War.^ I was when I recd your letter upon the point of preparing letters for him to the South where I <go> he goes in the hope, I pray to god it may <be> <a> <illegible> ^prove well^ founded, of saving his life. To shew that the Gentleman who presents his name to you did so in my opinion ^at least^ very properly I need only state that I myself offered him a post in my Cabinet but which he for good reasons declined.

<illegible> <illegible> There is not time to consult Mr Butler but the exigencies of the case are such & the danger of your making a fatal mistake in this state so imminent that I take upon myself the responsibility of answering for Mr Butler that he will accept the War Department if it is tendered to him. He performed its duties under Genl Jackson & gained great credit in it. I shall however for my own protection send my son to him by this days Boat to inform him of what I have done, so that he may arrest it if he <illegible> finds it out of his power to comply with our wishes for which there will be time, ^&^ in which event let me advise you by all means to take Mr Cambreleng 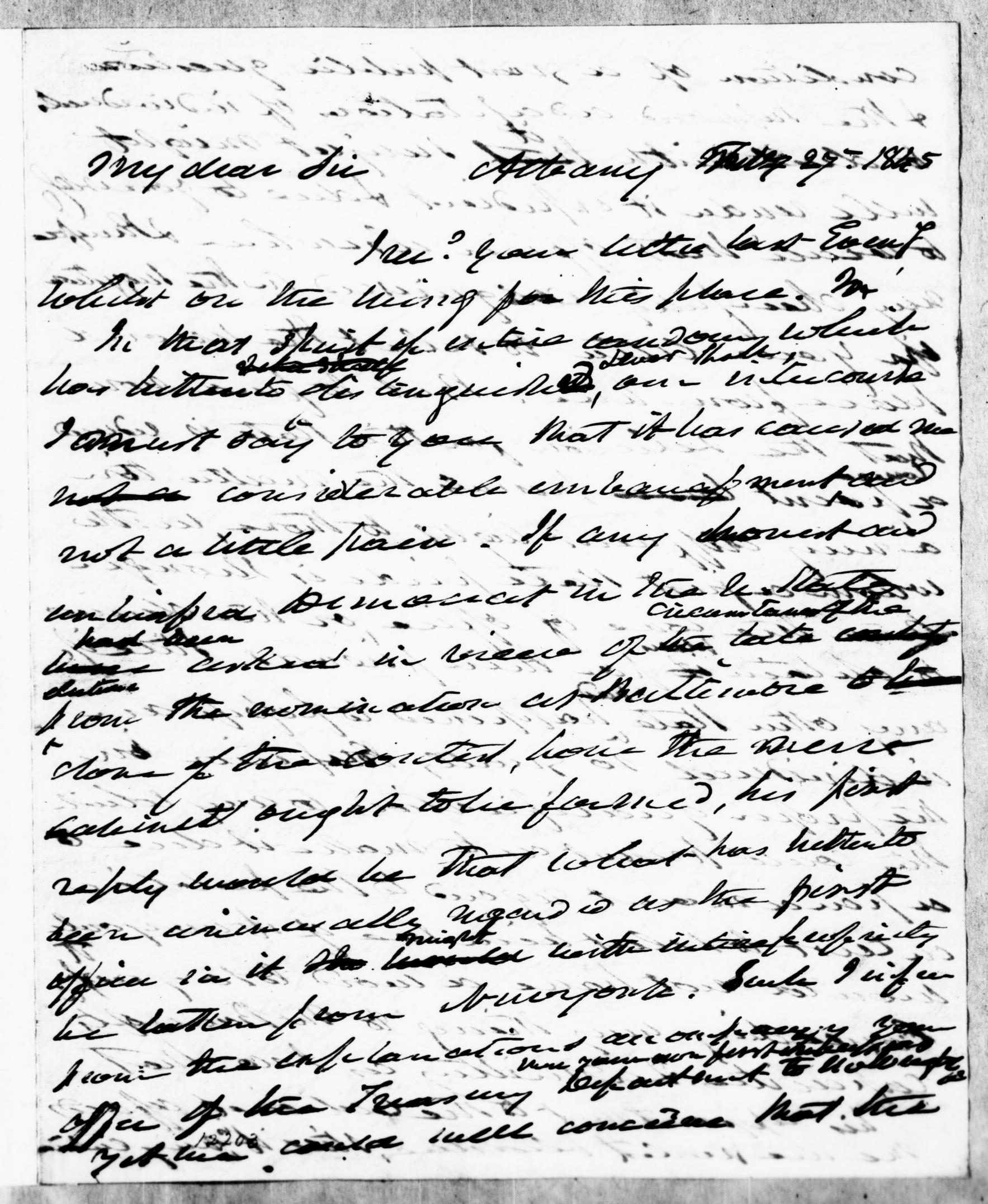 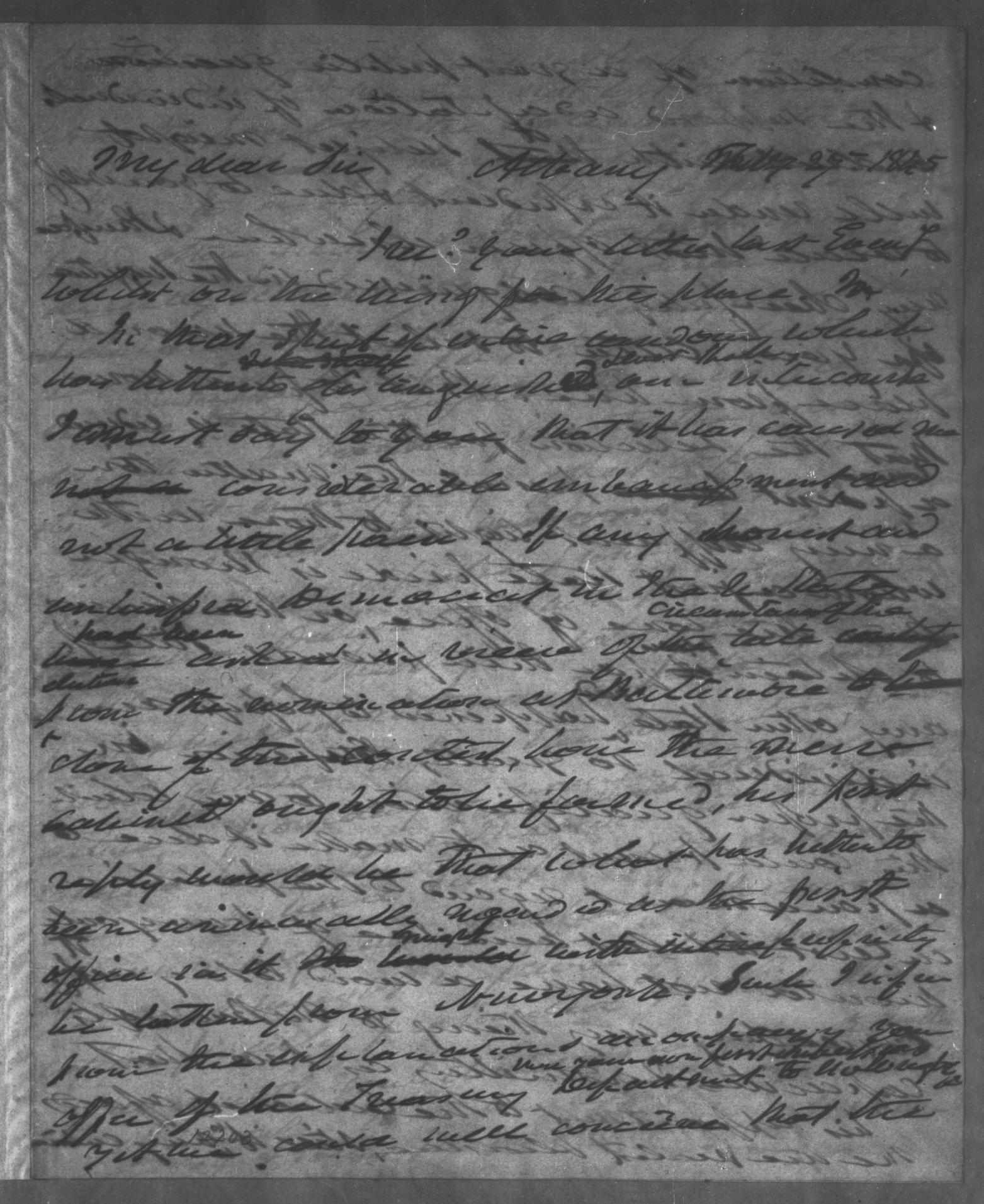 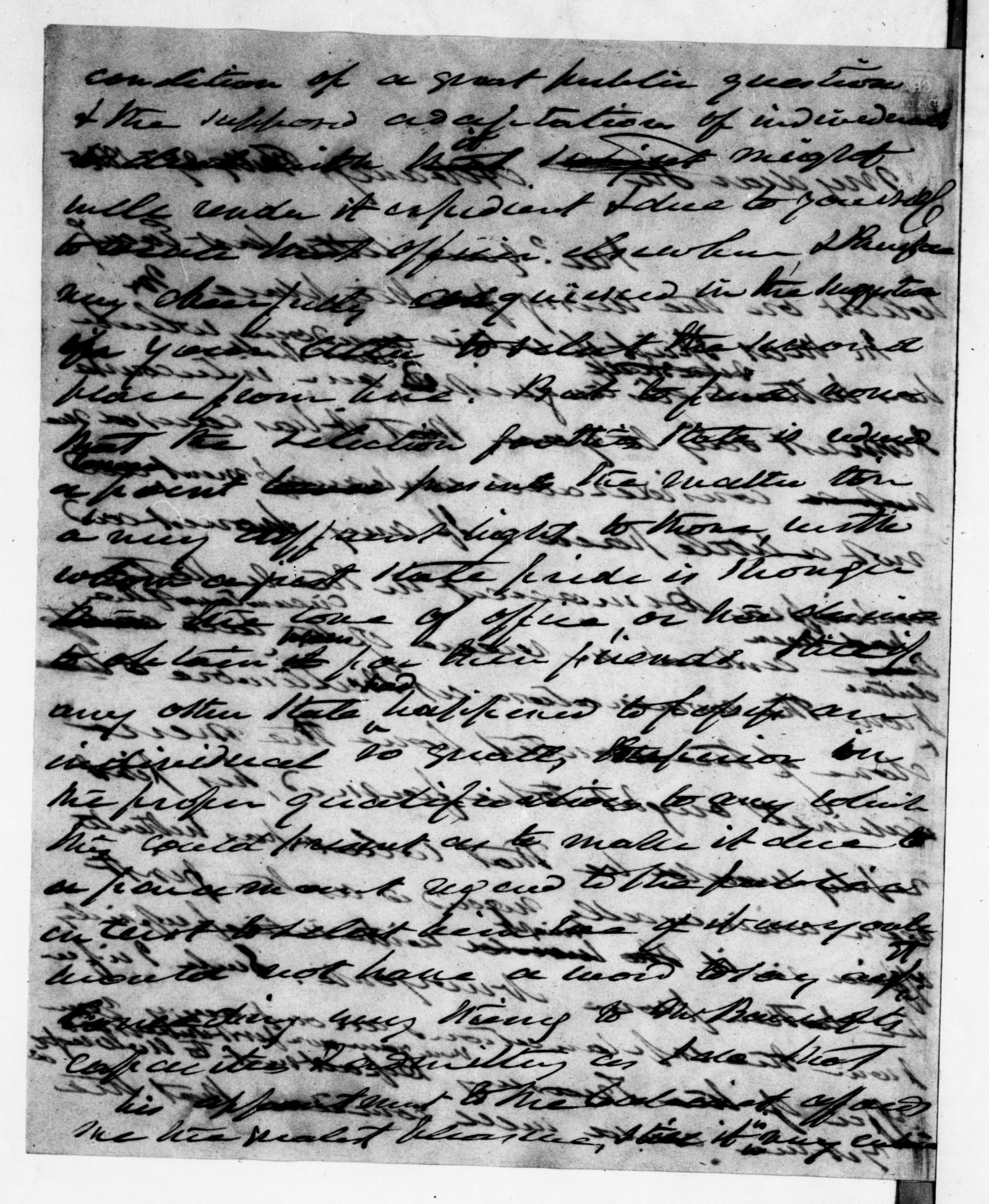 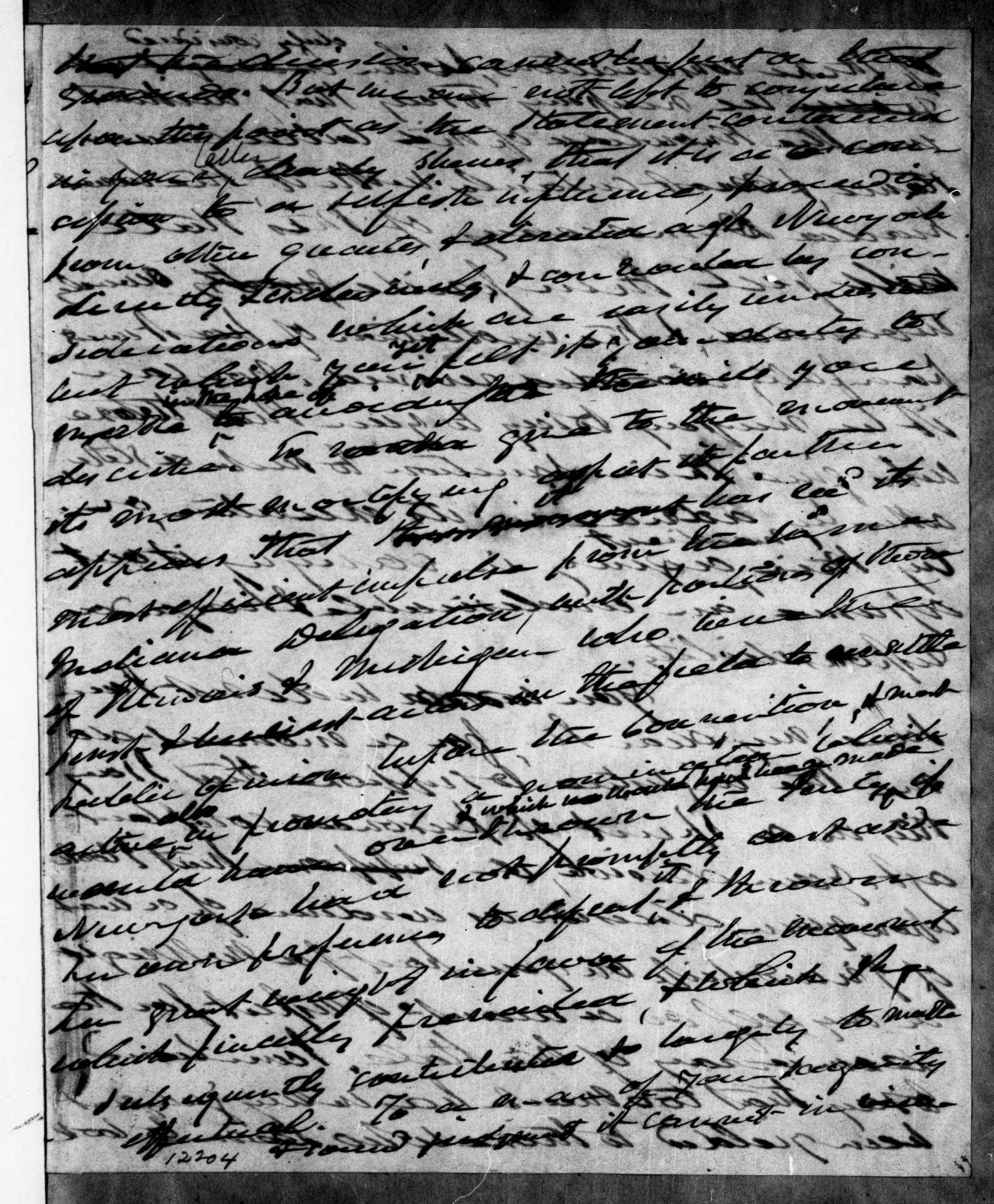 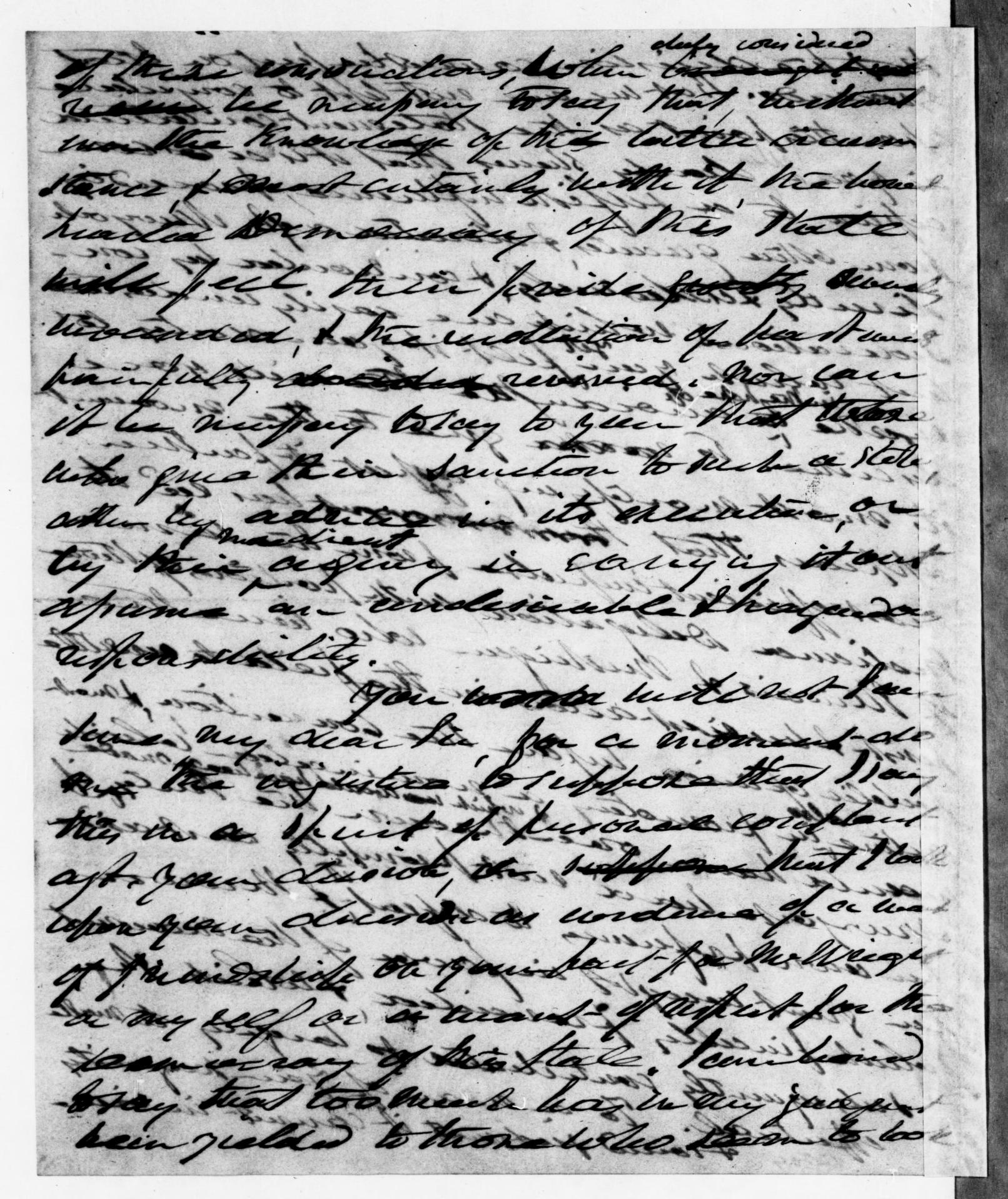 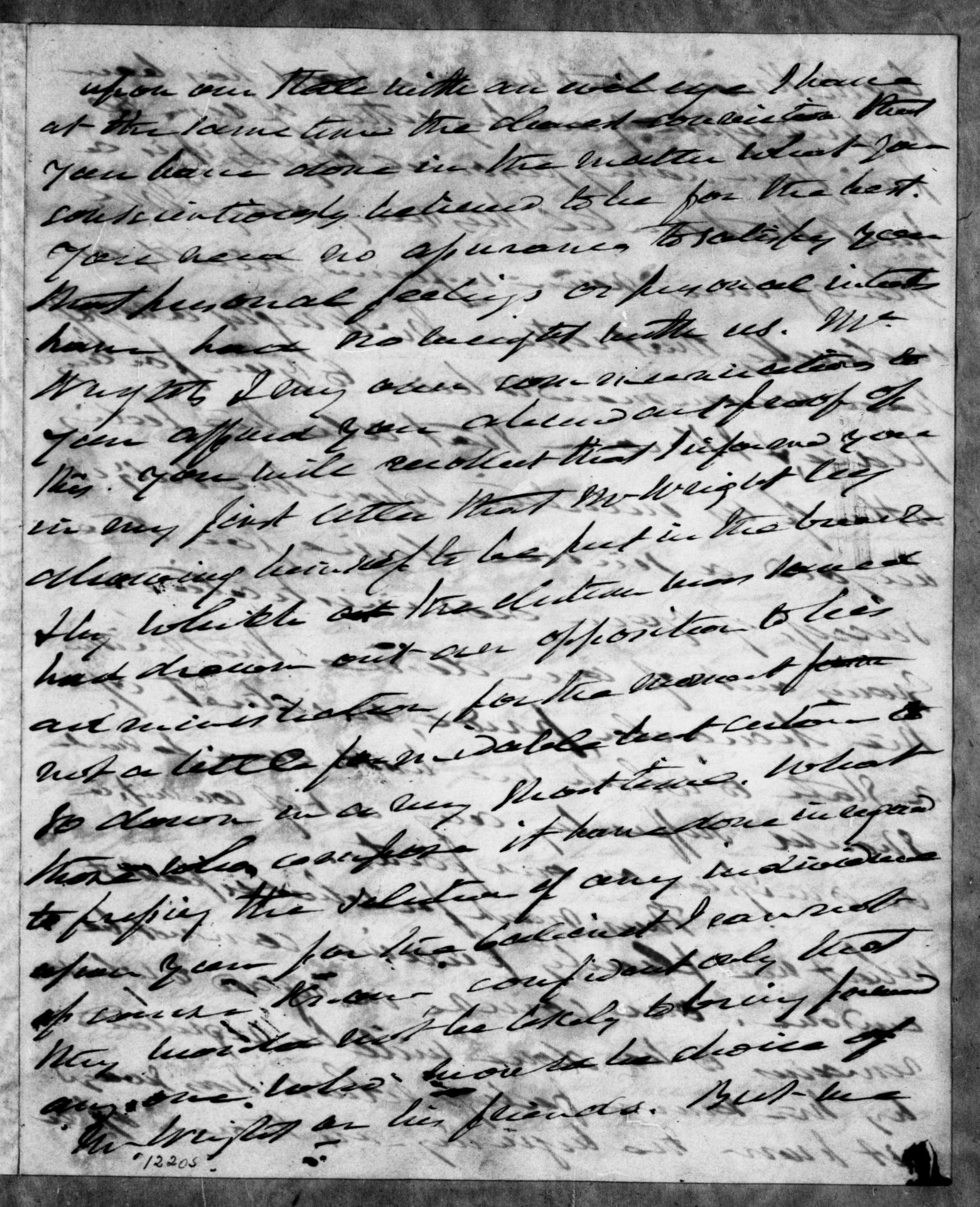 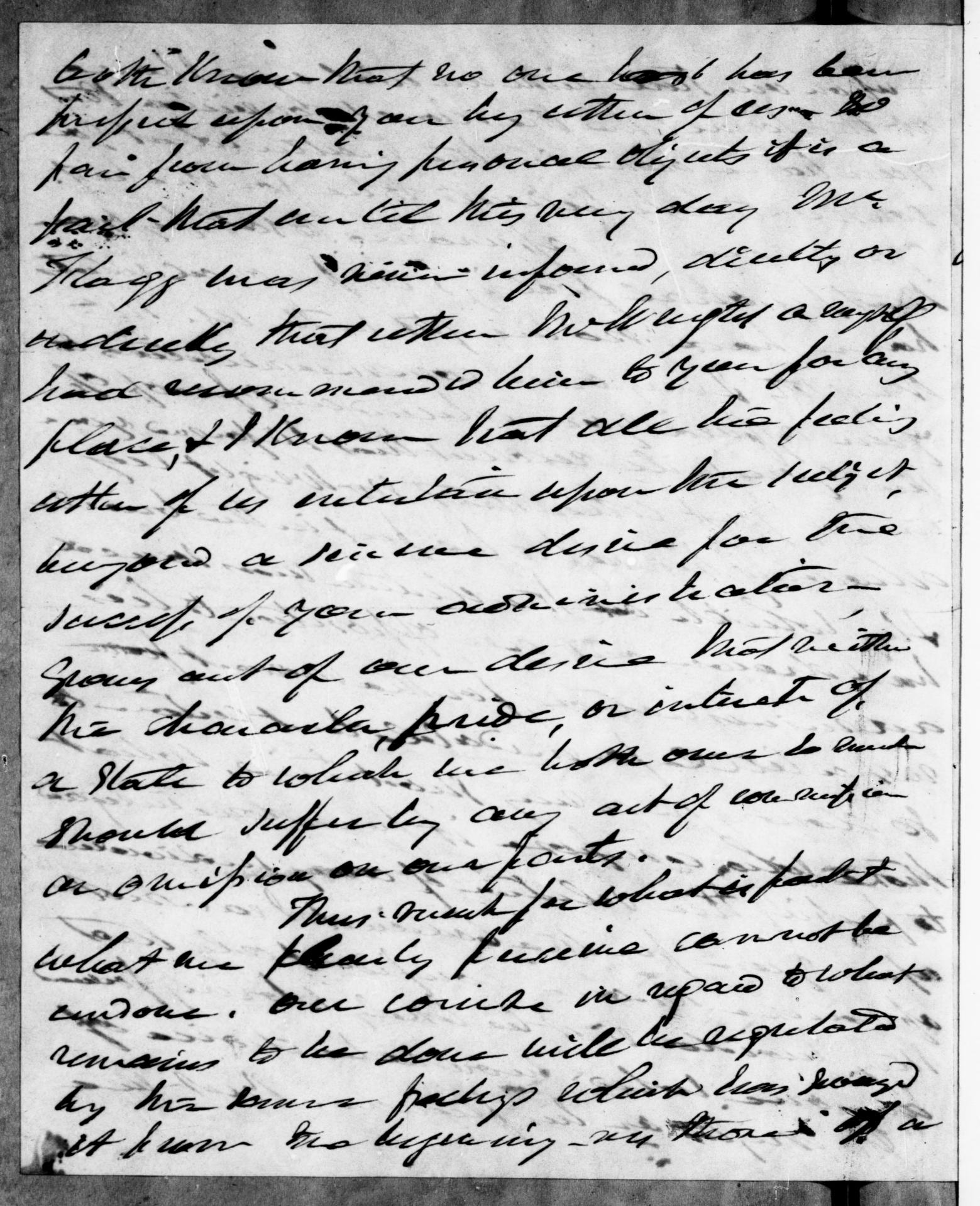 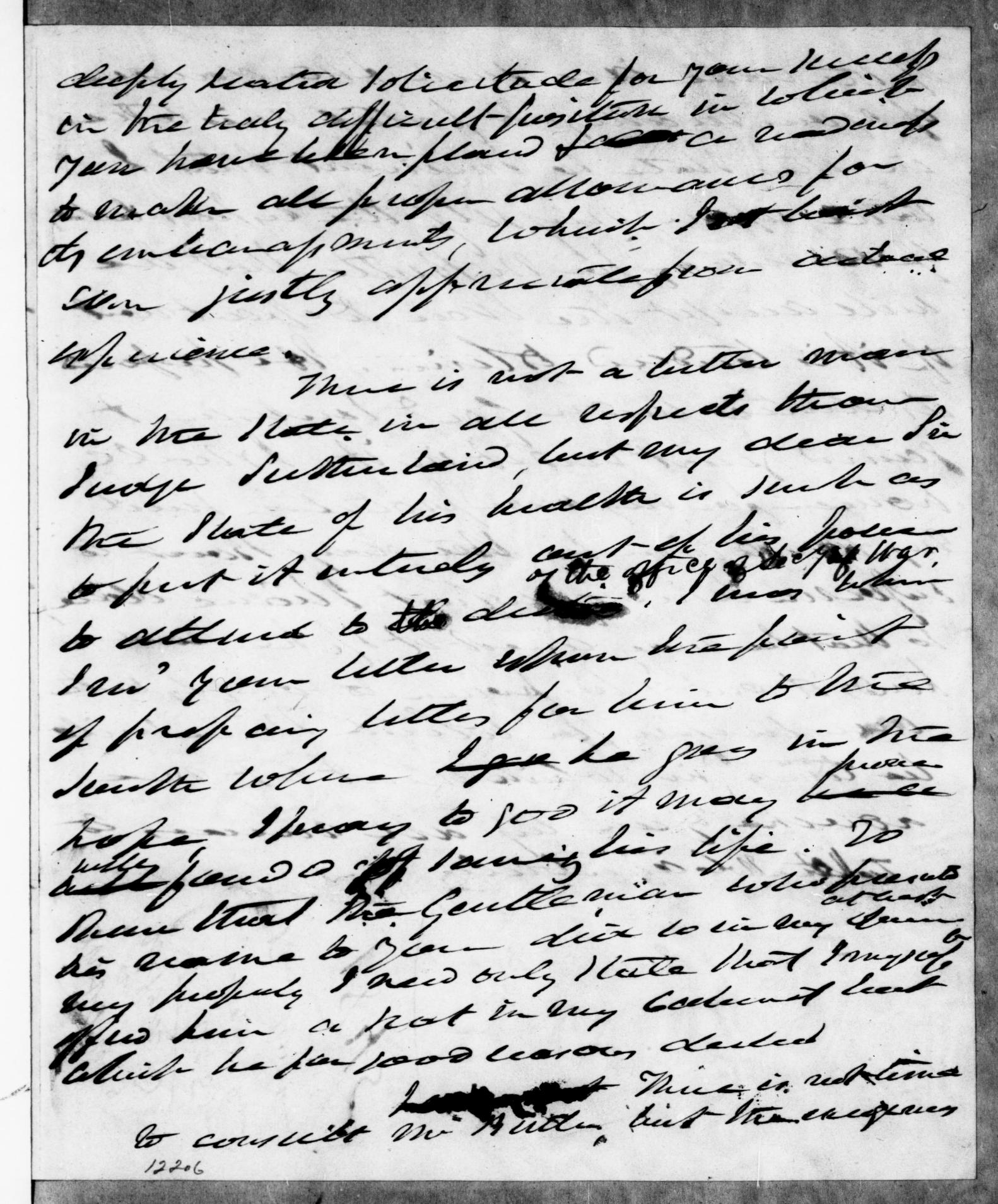 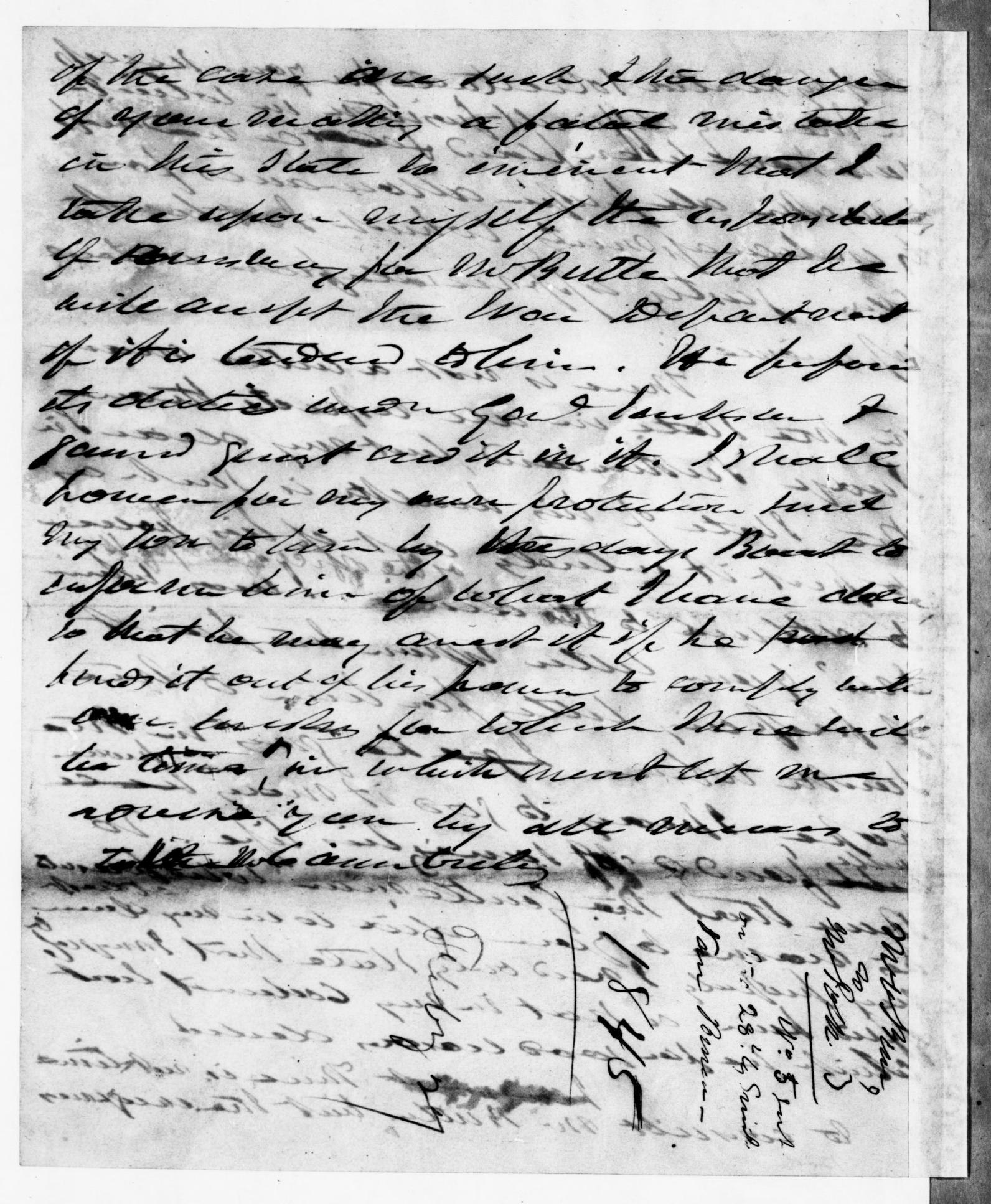