The result of the deliberations of the Baltimore Convention reached us yesterday morng. Of course it surprised us all, & none more so than myself to be sure. The previous ballottings, up to the 8th, recd the day before, had, in a measure, prepared my mind for almost any strange result, altho' I had some hopes that the violators of instructions would, in the end, return to their reason, & pay some little regard to the voice of their constituents, & the best interests of their country.

I regret, most heartily, that my hopes have all been disappointed. But what had most mortified & provoked me, is the disgraceful & deceitful conduct of our Micha. delegation. They were elected as your friends, & could never have been elected but upon that ground, by our state convention. They pledged themselves before the convention, & were virtually instructed to vote for you at Baltimore. As you will remember, of the 110 delegates in our state convention you recd every vote, with the exception of 13 or 15. Still on the very first ballot at B— 4 of them voted for Cass, ^(my substitute voted the 1st & 2d time for you)^ & after the 2d ballott, the whole 5 voted for Cass every time.

When they left for B—, with the exception of Willson, every mothers son of them, avowed their determination to go with their N.York friends, but they went on to Washn & allowed the scoundrels, who never could have been elected to Congress had they avowed themselves any other than VBuren men, in Congress, to hoodwink & blind them, into a violation of their pledges & instructions.

It may be they will never regret it, but if they don't, then I will confess that treason no one need fear punishment for treason

In all this matter I have however one consolation that Genl. Cass has been caught in his own trap. The Southern rascals used him as a cats paw, until they had succeeded in their designs, & then, having no further use for him, & never having any real friendship for him, they drop him as they would a hot potatoe. If there is any one man whose course has been more dishonorable & contemptable than another, it is Genl. Cass. No intrigue has been too small for him to engage in. He has acted upon the principle that “all is fair in politics” opposed, at the time I wrote you last & for two weeks thereafter, most decidly & unequivocally to the annexation of Texas, he openly opposed it any & every where & to every body, his friends have all declared they could never support any man who would favor it, & circulated remonstrances thro' the city to forward to the Senate. He received a letter shortly after from Washn advising him to take ground upon the subject, in opposition to yourself whichever side you might take. He waits ‘till your letter is published, violates his own integrity & principles, & writes his Texas letter. And such a letter! The South take hold of him, use him as long as they ever designed, & then leave him dead as a mackerel. If I had been in that convention, you would have found one Michn delegate who would have stuck by his constituents & carried out their will. You may be surprised that I was not at Baltimore. I was elected & expected to have been there, but about 4 weeks before the sitting of the Convn I was suddenly called to Watertown, N.Y. on the receipt of the melancholly intelligence of my the death of my dear, kind, good father. I found my mother & all my relations, of course, in the deepest affliction. I was detained then until the Monday immediately preceding the 27th [. . .] I recd news from home, of the sickness of my wife, that week I had intended to have left Watertown for Baltimore. Of course I had to alter my course towards this place. I found my wife better. She is still however quite indisposed, & I do not ^now^ look for her restoration to health under a week, when I hope to see her the happy & healthy mother of another healthy child

This is the cause of my absence from Baltimore & the reason why one if not more of the delegates to Balt, did not follow every time in the lead of the NYork delegation.

Our democrats had a large & enthusiastic, ^meeting,^ considering the circumstances, meeting last evening, in response to the nominations Genl Cass made his appearance at the meeting the first time he ever attended a political meeting, & gave in his adherance to the nomination & pledged his ardent support to it

If not inconsistent with your ideas of propriety, & if it would not be trespassing too much upon your time, I should be pleased to hear from you &, receive such suggestions relative to the canvass as your discretion & experience might suggest, & also what in your opinion we may reasonably anticipate to be the result of the election. I trust I need not say your communications will be regarded as strictly confidential.

I have this moment recd intelligence of the last day’s proceedings in the convention. Mr. Wright it seems has declined. I am sorry that he has done so, tho' I can not blaim him. Mr. Dallas it seems takes his ^Mr W's^ place on the ticket. Don't we loose NYork by this change?

Please write me. This state will give her vote for the Baltimore nominees, by a handsome majority, without fail.

For your character as a public man, as well as a private citizen, I have always entertained the a feeling of admiration, as well as the highest consideration & respect. Believe me, my dear sir, that feeling still burns warmly within me. 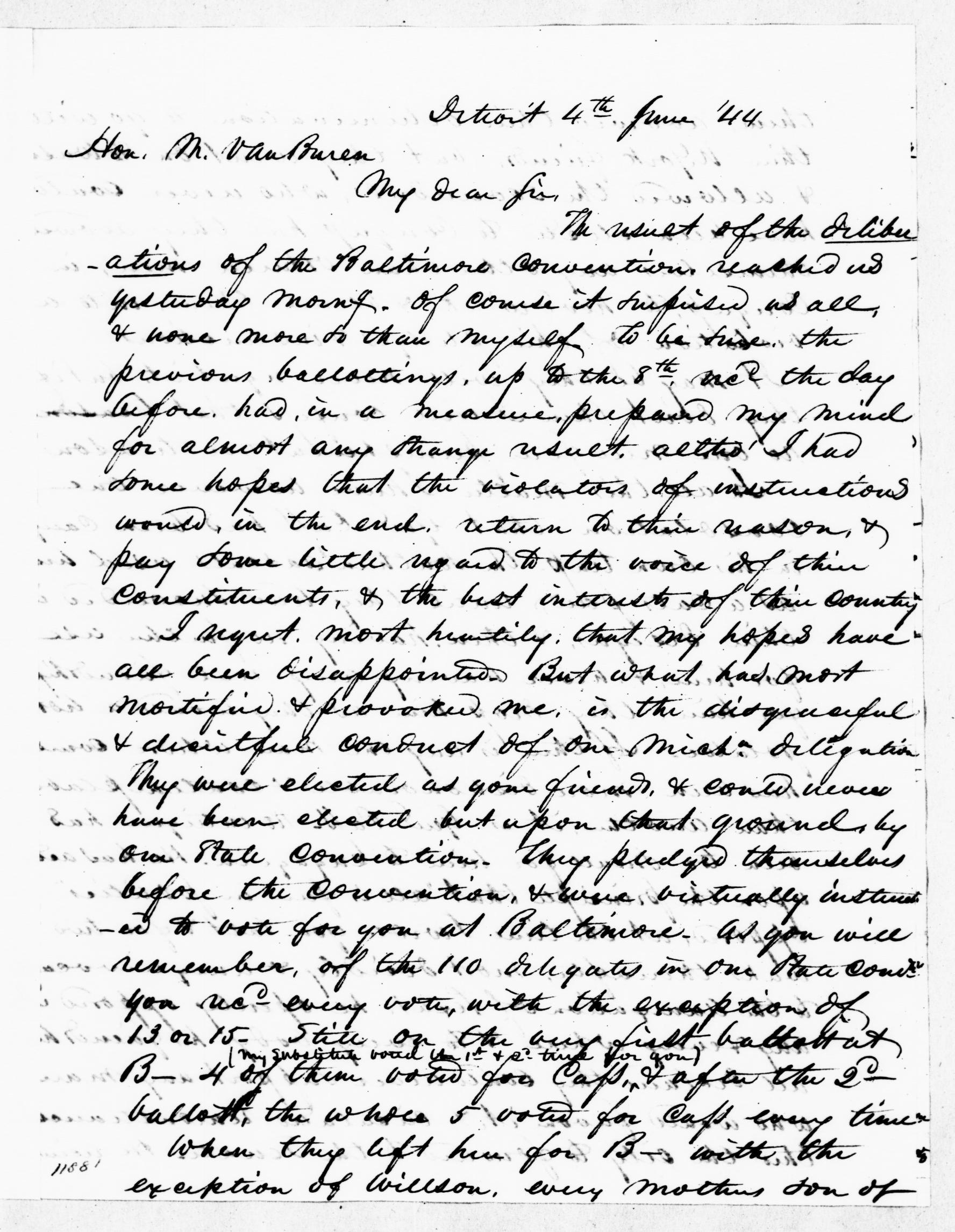 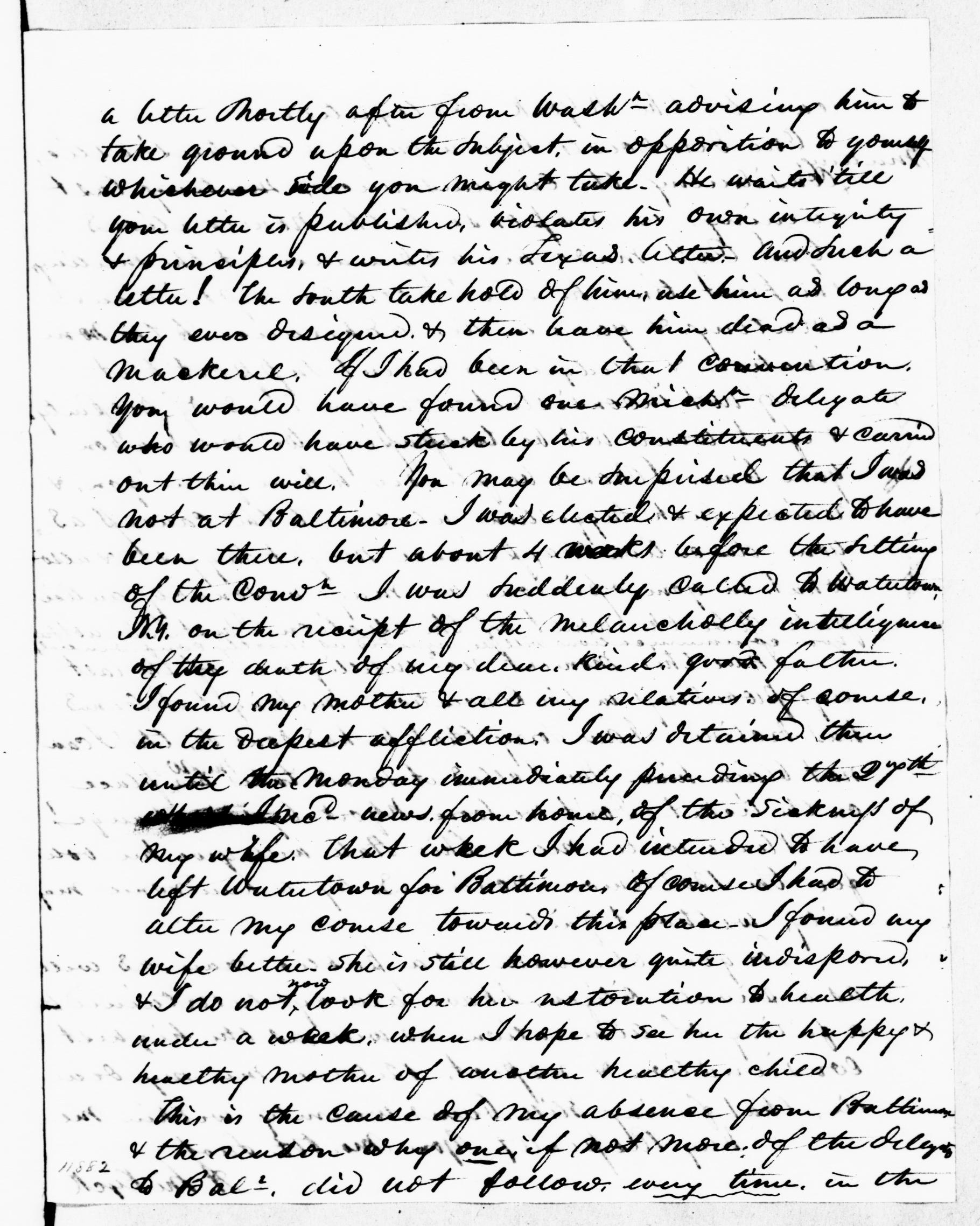 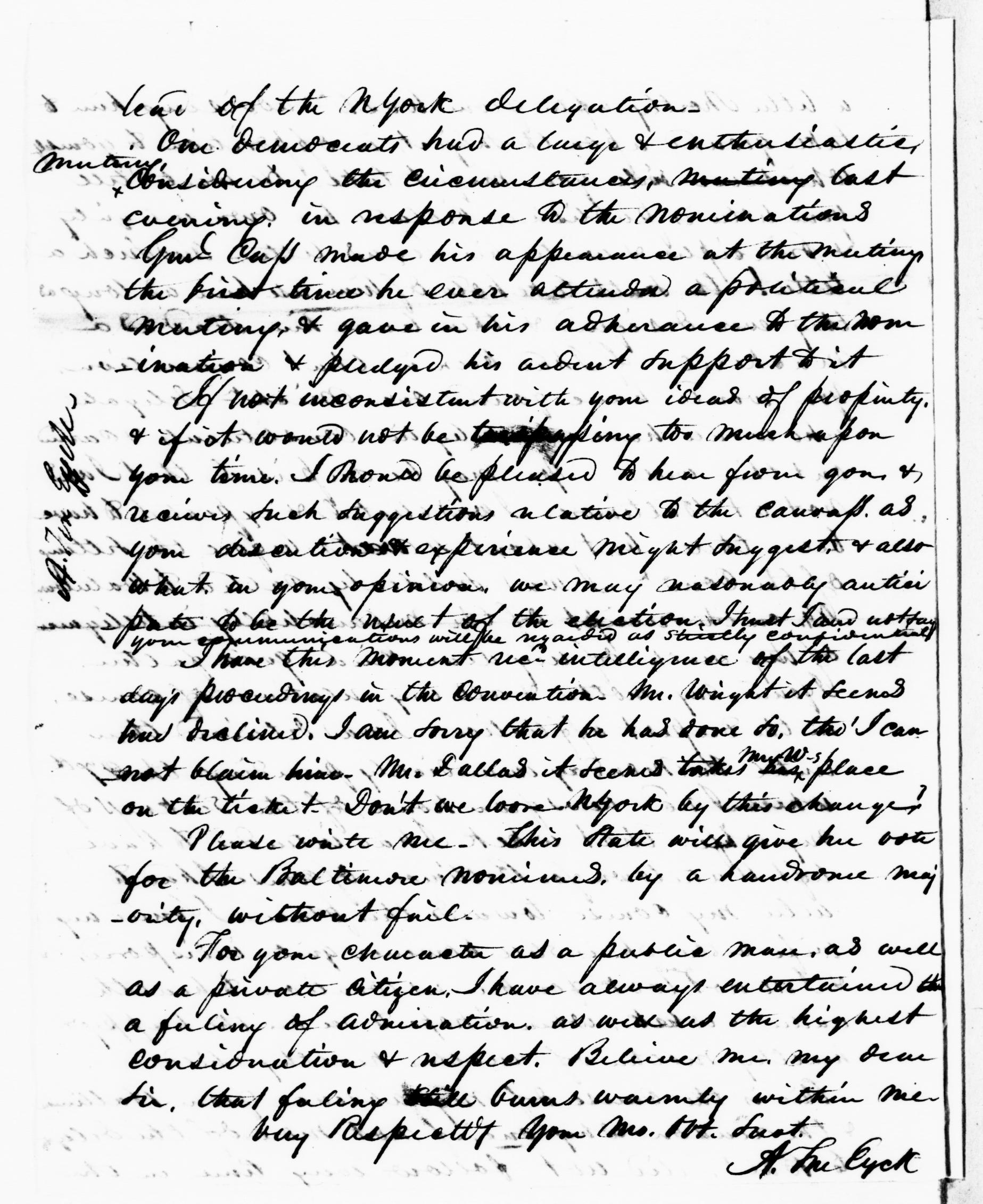