We had opened the contest for the Presidency in this state with the highest prospects. The questions which the people required to be discussed were the justice and expediency of the present Whig Tariff of the distribution of the proceeds of the public lands and the Bargain of 1825. I had been invited by our Democratic associations of the the neighboring county towns to meet the Clay candidates for the offices of electors and examine these great questions. I had done so and just as I was about to make a speech at Gallatin the mail arrived and brought your letter upon the subject of the annexation of Texas. Instantly there arose in the vast crowd which was assembled an overwhelming excitement. The improvident publication of Genl Jacksons letter by Brown had given him a decided position and yours was ^to a degree^ antagonistical. Partiality for Jackson and a rabid desire to get more land brought the whole mass to a decision at once in favor of old Hickorys positive views. I found myself as we say here in a close place—but I calmed the ^people^ somewhat by invoking them to pause and reflect which they agreed to do and I proceeded to go on as well as I could <to> ^about^ the matters which we had assembled to investigate. There is a political conflagration raging throughout the whole south-West. How long it will be before it is either abated or extinguished it is impossible now to foresee. The Breeders of mules and horses and hogs cry out let us have Texas right or wrong whether or no. “If the British interfere we will give them New orleans again. If those Mexicans come nigh we will eat them up.”

A few days ago the General sent me word he wished to see me about a Bill in Equity filed against <him> as Executor of the last will of a deceased friend of ours. I went up as soon as I was able and found him complaining. He said “Balch I have been in much trouble for the last two weeks and I am much jaded.” I want to be in peace. I have just prepared an answer to the numerous letters which I have received upon the question of the ^immediate^ annexation of Texas which I shall send to the press. After I write Mr Van Buren a letter I shall have done with this business I trust forever. The old man spoke with almost all his <illegible> ^former^ energy. The fire of the flint came out bright as ever.

Commodore Stewarts letter was well received here by those who bear the “sobriquet” of “Texians”-but <illegible> the commodore is a “novus homo” with the younger portions of our voters. Not so with Cass who has been so recently before the public. This letter which was purposely drawn to conciliate the General by a literal adoption of his views, works well in this latitude and will be approved of by a Mass Meeting which comes off here to morrow evening.

This great question has been so suddenly sprung upon the Whigs that the leaders in this quarter are at fault. They say that they are in favor of annexation but still they go for Clay who is opposed to it. For the county people quote and rely upon that part of his letter where he says, that he is not for it if opposed by a considerable and respectable portion of the confederacy, thus abandoning the great conservative principle of our Govt that the majority shall rule. Upon this question, let it be decided by the Senate as it may, I am perfectly satisfied that Clay must loose largely in Ten. Louisiana and even in Kentucky. Hundreds in all these states have ^already^ openly renounced this 'mill boy of the Hanover slashes.”

With regard to the feelings of the General upon this question of annexation I entertain some conjectures which may be without any foundation to rest upon. Ever since Ten. became a Federal state the <illegible> ^he^ has been ill at ease–in truth he has been mortified. The fact was painful to him and he has long desired to witness her political regeneration. The triumph of Clay here in 40 filled the old mans bosom with bitterness. I have supposed from what I have seen and heard that the old man ^he^ saw that Clay could not go for annexation and gain the support of the abolitionists of the North–that with this question he could be beaten and that at all events he must be defeated in his ^Jacksons^ own beloved Ten. If these were the secret views of the General whatever may be the result of the General result ^contest^, it is exceedingly probable that the latter object will be attained by Tennessees wheeling round into her ancient political position.

Accustomed as I have long been to the excitement which often pervades the population of the “Sunny south” ^yet^ I have never seen our folks in the same condition that they are at this moment.

You may easily imagine with which intense feelings our 115 thousand voters look for news from Baltimore. This whole matter of which I have been writing has been conducted and managed by our friends here, not at all to my taste. I have resolutely refused to open my mouth upon it altho specially invited to do so by a guest number of persons. I have said my mind is not satisfied therefore I shall not commit myself humble an individual as I am until I can view the whole ground. 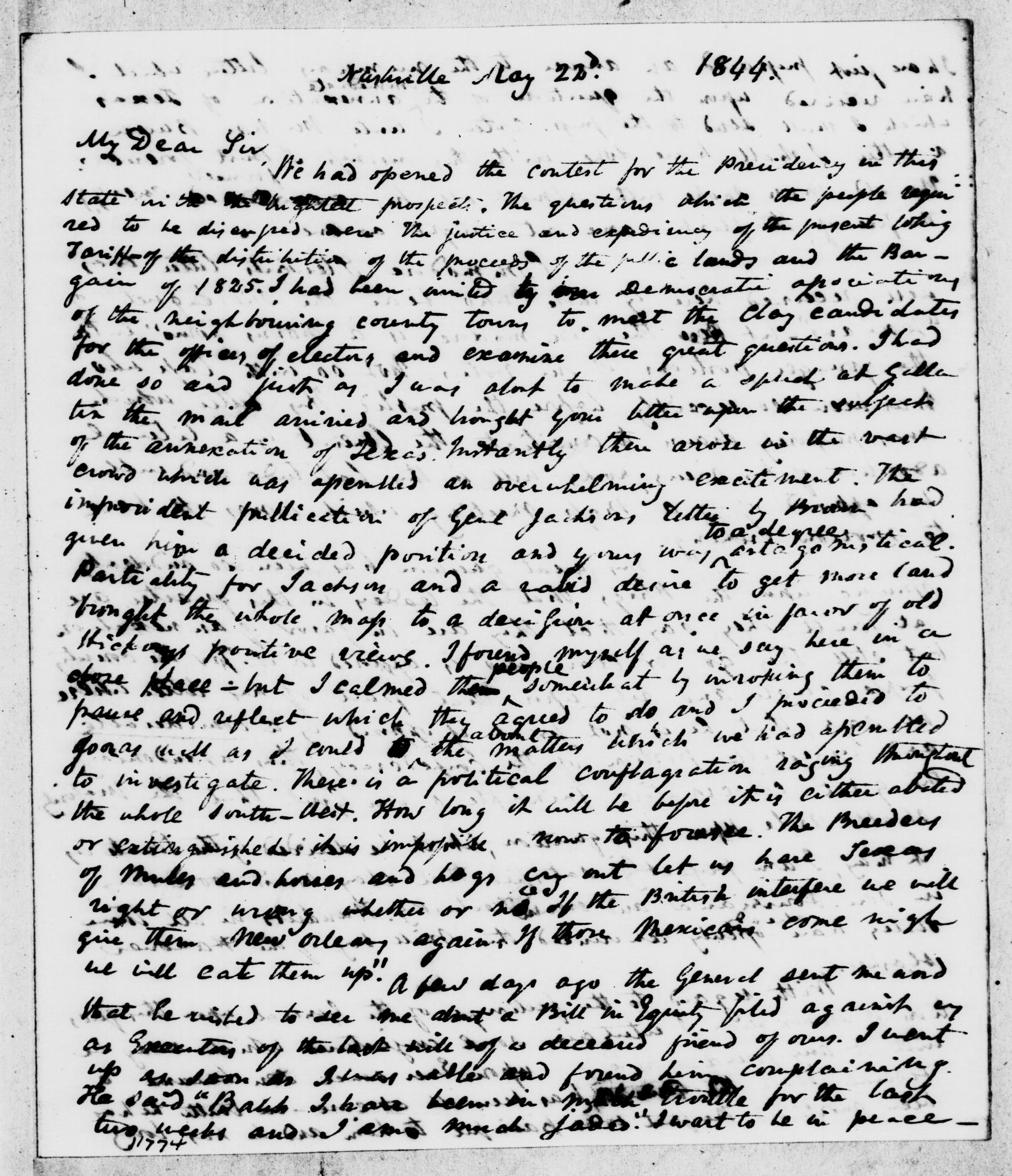 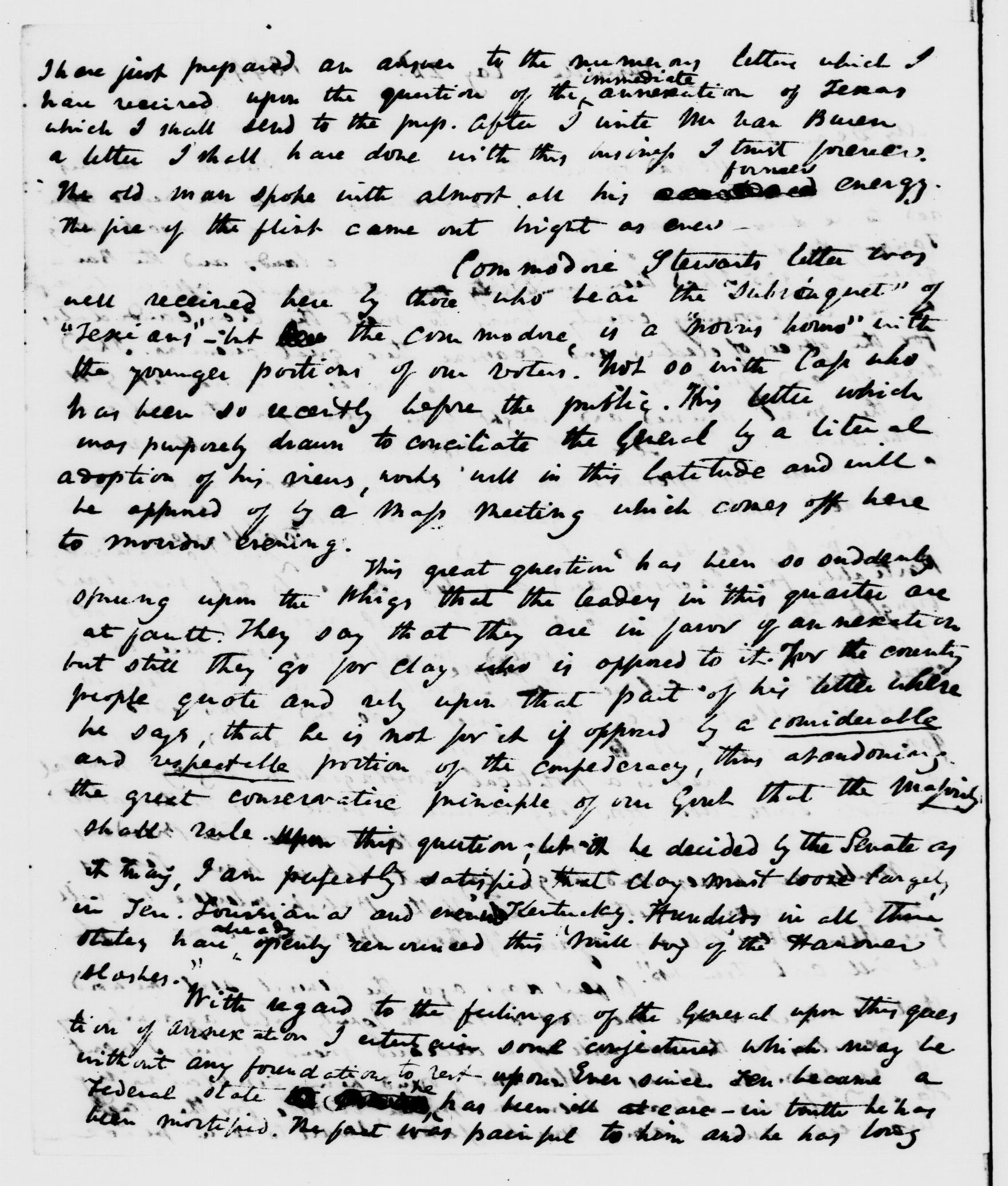 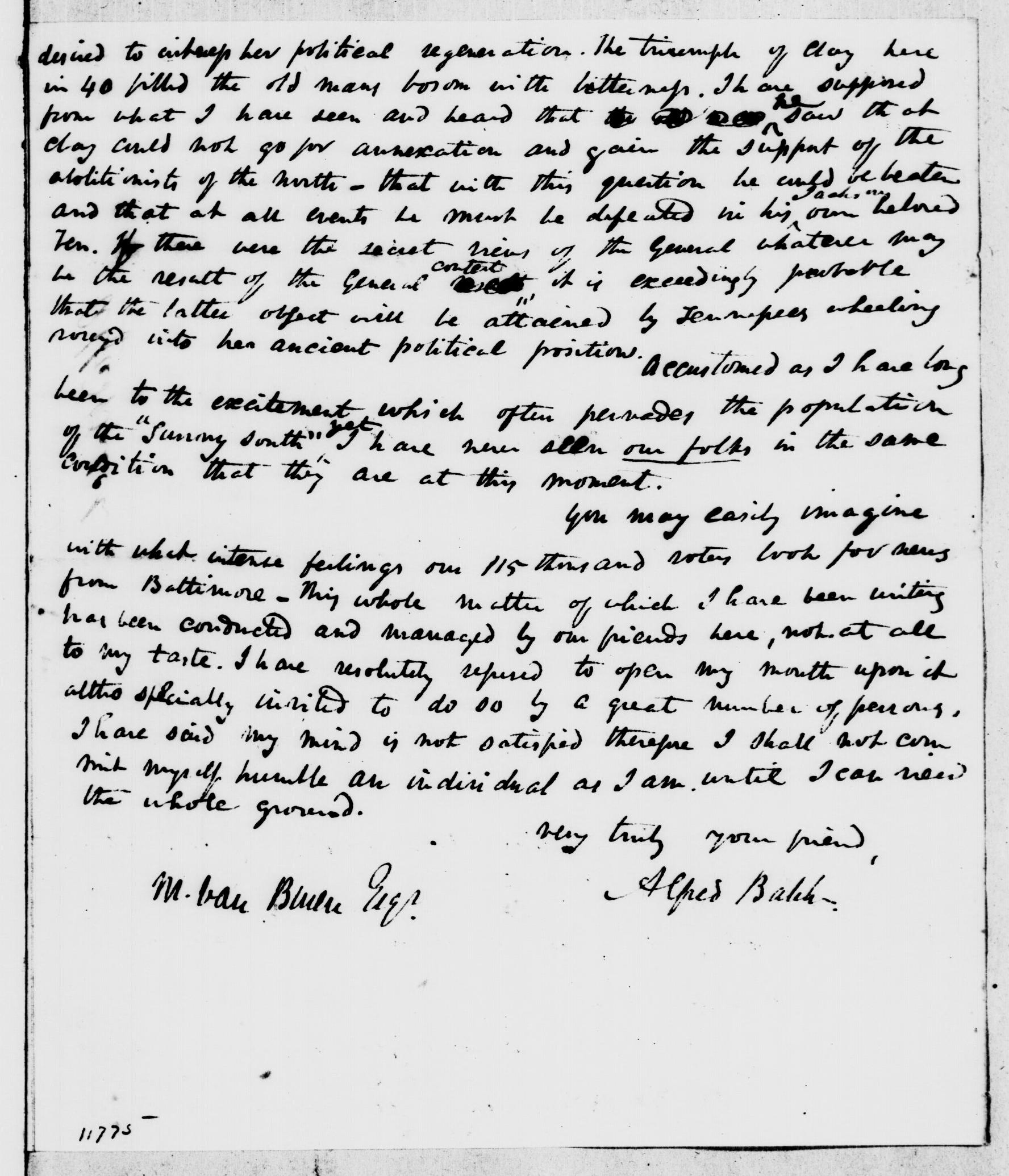 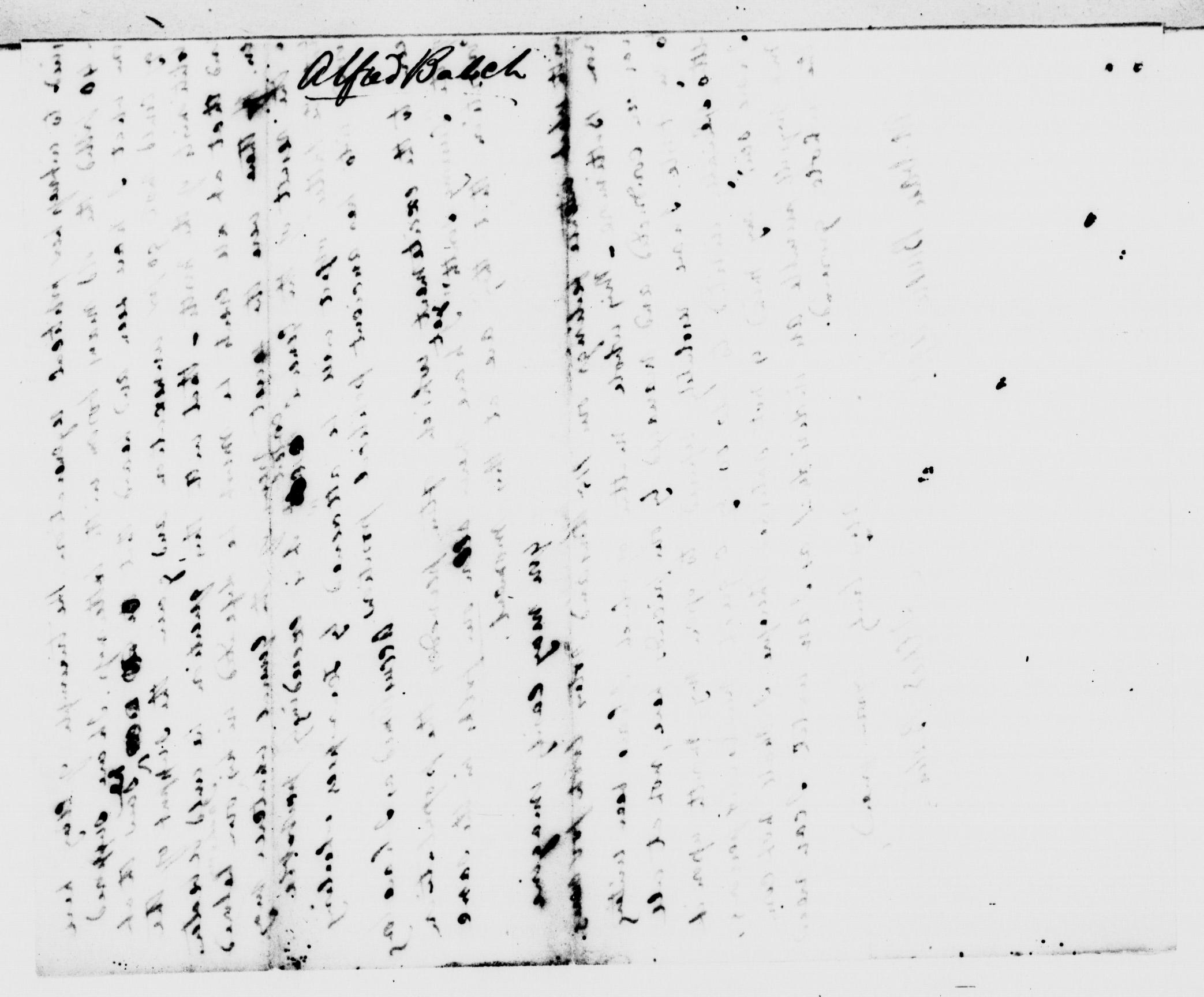 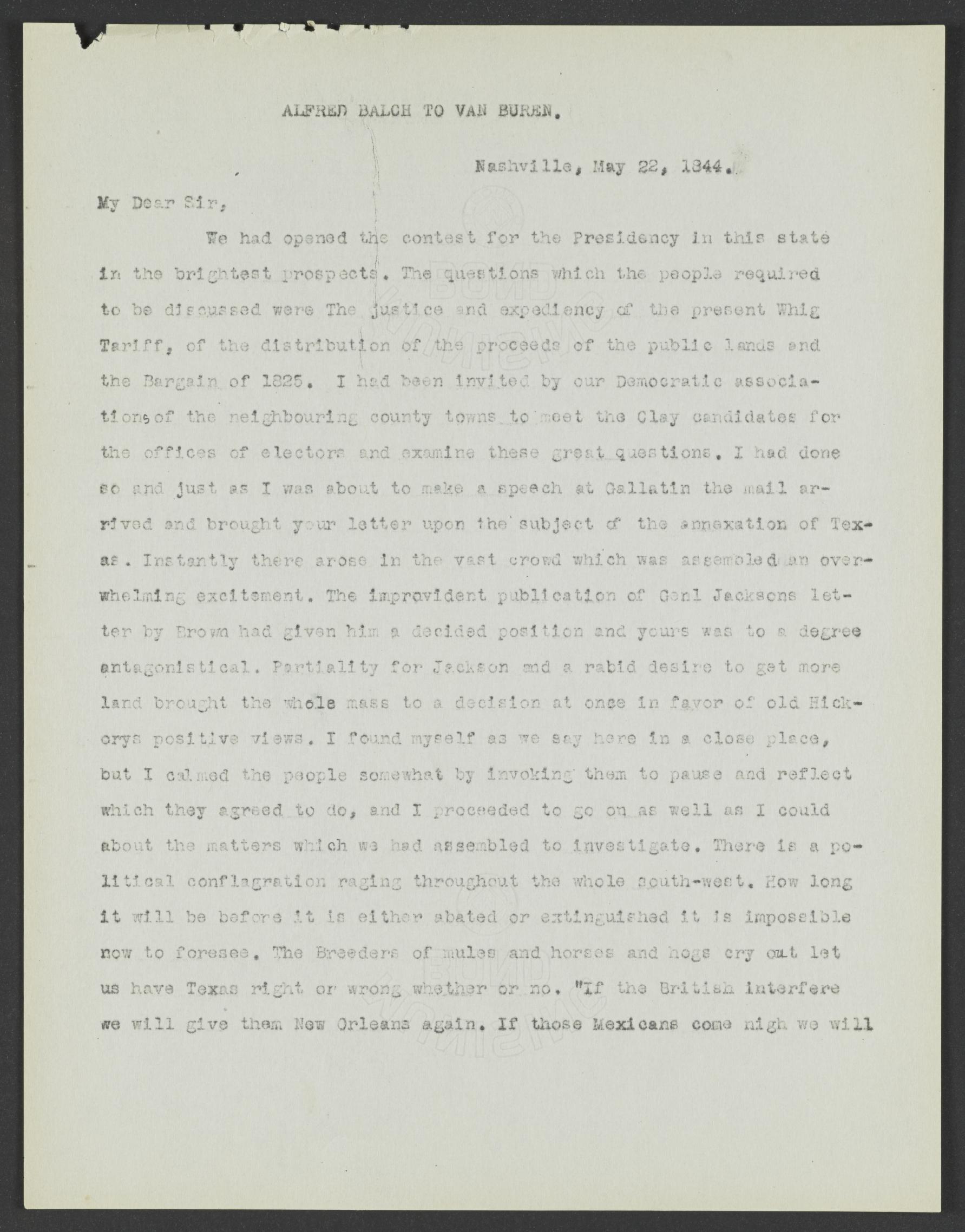 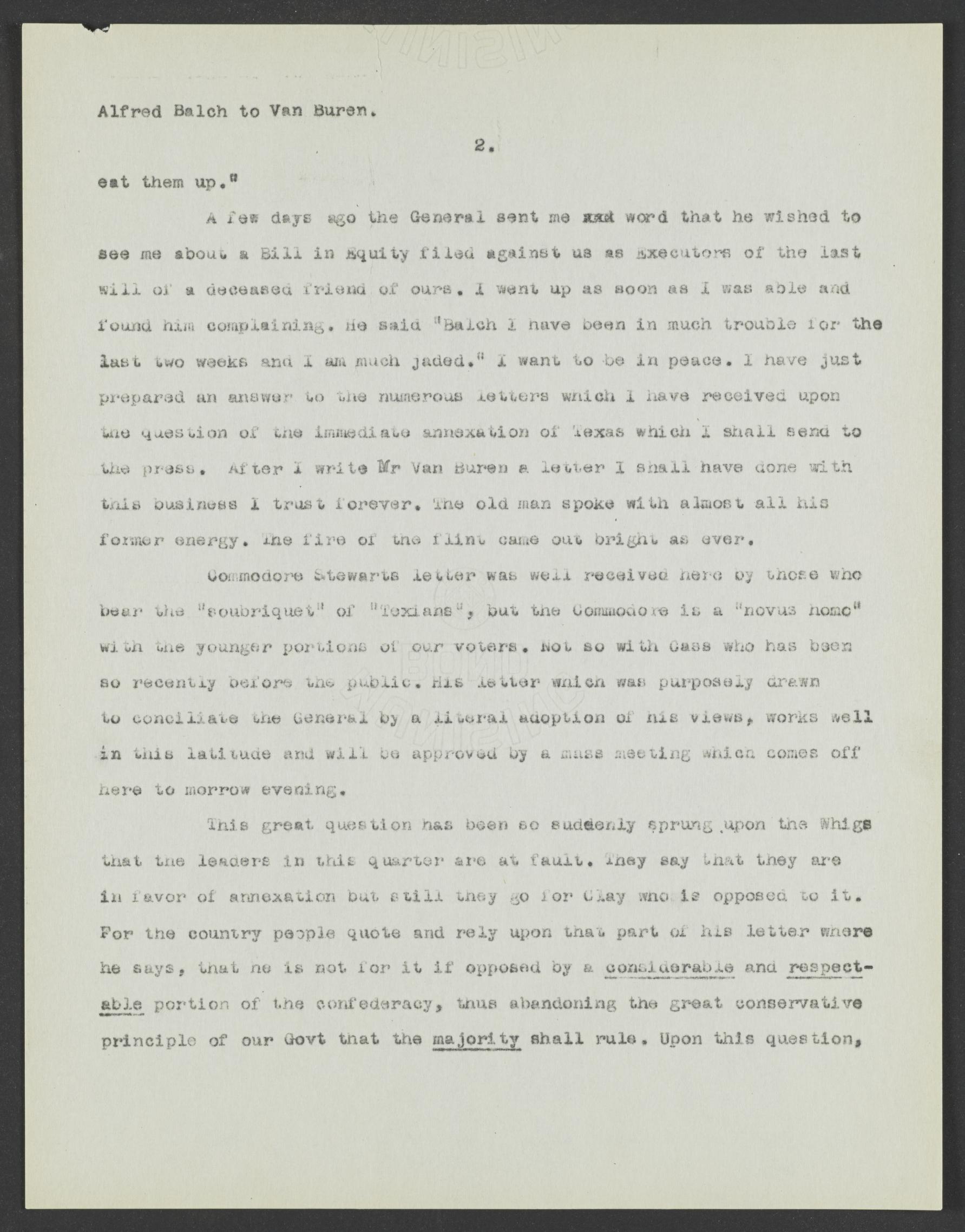 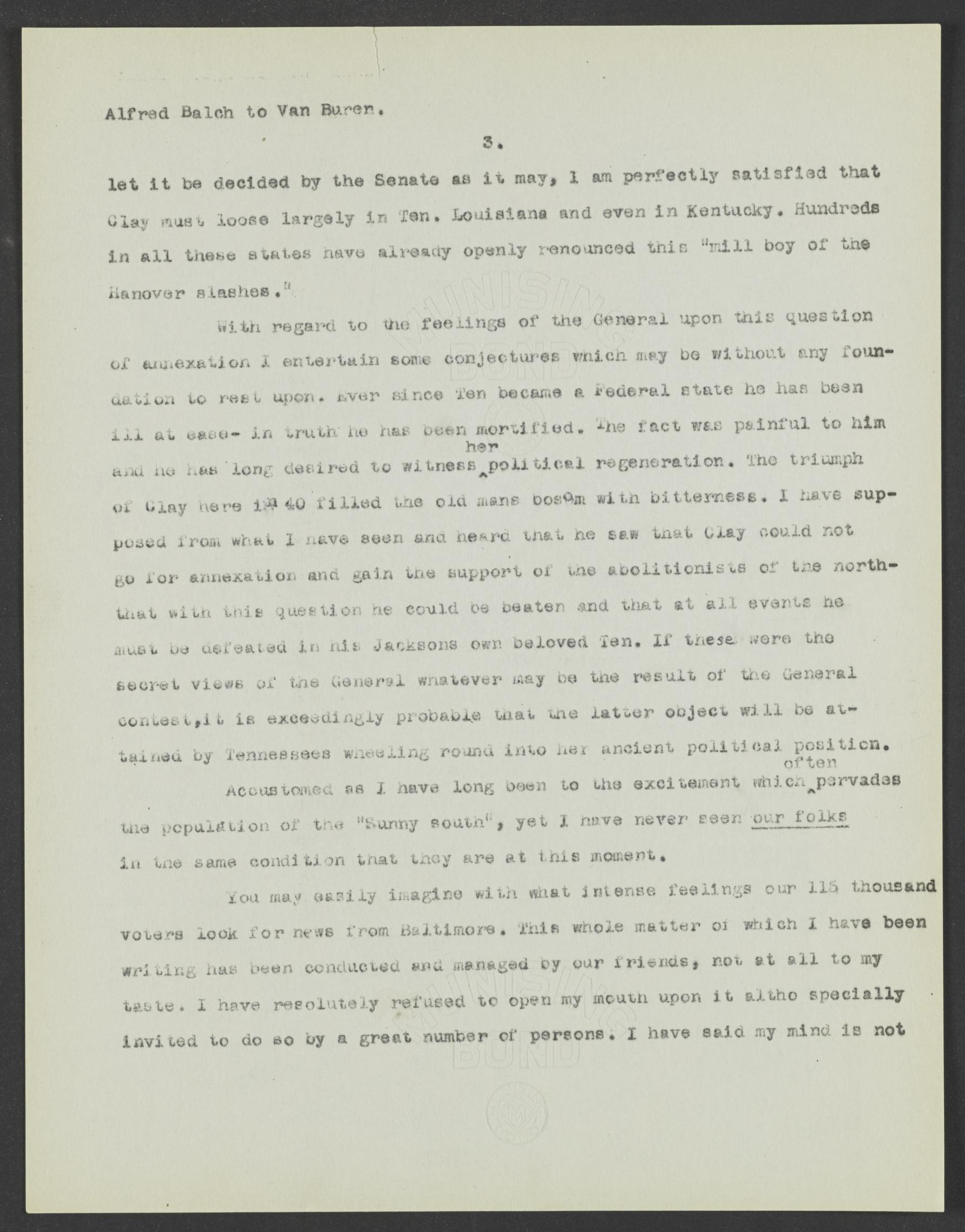 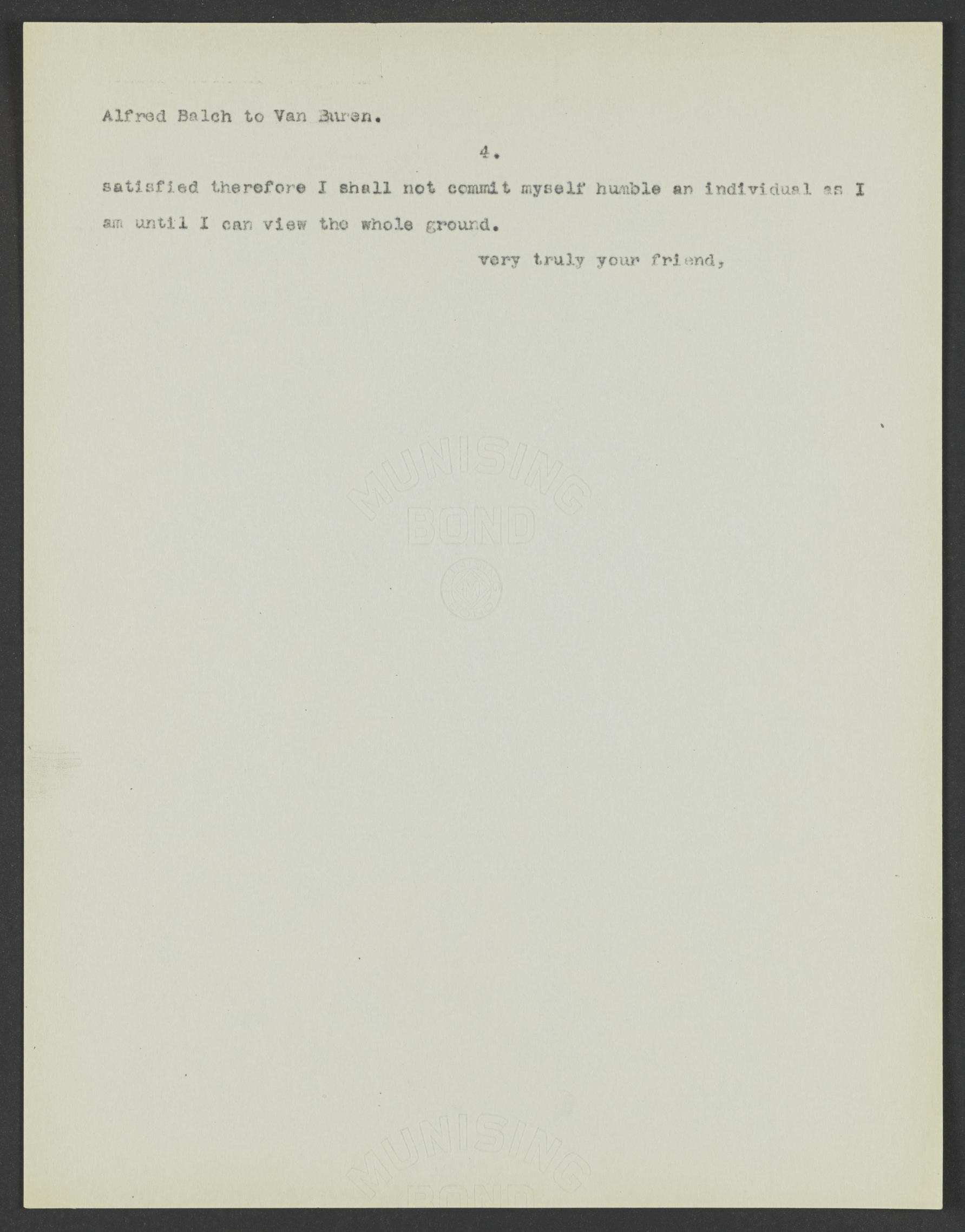