I write now to notice sundry things which I have overlooked and omitted to answer in your former letters, as well as to give the <present> reasons, and to say a few words upon another subject.

The King to whom I refered as one my advisers here at present was Preston King and not William R. The latter has been behaving very well for him for the last year or two, but you Know was never made for a safe adviser in all cases. With more experience Preston King would make a very desirable counsellor upon all occasions.

Upon the receipt of your letter of the 2nd I made all the inquiry I could safely, but can learn nothing about Mr. Webster’s attempted negociation with Mexico, of which Mr. Bancroft speaks. In a letter to me he makes the same assertion he does in his letter to you, and with equal confidence, and asks me if I was aware of it, but of the source of his information, or of the evidence of the fact, I know nothing, nor can I learn any thing here.

Gov. Fulton tells me that commissioners have been sent from Texas to Mexico, not long since, for purposes of negociation, and that the news was made public, about a week ago here, that they had negociated an Armistice which is to continue until some time in May next, but what were their powers, or instructions, or authority, beyond this, he does not Know. He supposes they had full powers to negociate a peace and a separation, but this is inference. He says he saw, this very morning, a notice, in some paper, that they had returned to Texas, having only concluded the Armistice.

He says the letter of Genl. Jackson to him, as Secy. of Arkansas, to which you refer, was written before Houston went to Texas, and when he was residing among the Indians; that the Genl. supposed he was trying to organize a force within the United States to invade Texas, and that was the movement against which he directed Gov. Fulton to watch; that he made an examination, as Genl. Jackson requested, found that Houston was doing nothing, reported that result and satisfied the General’s apprehensions; and that after that time Houston went to Texas without any armed force. This is his recollection of that matter. He says, when the stir was made about the correspondence between General Jackson and himself, it was found that all the papers had, in some way for which the General could not account, got out of his possession, and that a person by the name of Mayo published what purported to be Genl Jackson’s letter to him; that he had not brought the letter with him, but he sent home and got it, after you became President, and that, at your request, either the original letter, or a copy of it, was filed in the State Department, where it must remain. He thinks it was the original, and that Mayo’s publication proved to be a correct copy of the letter, but he has not a copy of the publication, and does not Know where I can find one. If a copy of Genl. J’s letter is desirable to you I suppose I can obtain it from the Department. Gov. F. says he had sent full copies of his letters, as reports to the Genl. and he does not Know that they can be obtained any where.

I made the Communication to Mr. Hammet by a note, on Monday, and he Came, at once, to see me, and talked very well, and said his object was not to embarrass you, but to aid you &c. &c. I told him he must be sensible that the question was embarrassing, and that I did not Know at all what your answer would be, but that you would answer as soon as you could conveniently. He replied quickly that he Knew what your answer would be, that you was in favor of annexation, that members of our delegation had told him so, and that he Knew that before he wrote. I told him I did not think any person in the world Knew what you would answer, and I was satisfied no member of our delegation was authorised to speak for you upon that point. He seemed suspicious, and asked me if others had not written to you, and said he Knew Maclay and Hubbell and Davis had, and then asked if Maclay was your friend? I told him I supposed he was, that I Knew they had written, but that they had, at the same time, submitted it to you whether to answer or not, and whether publicly or privately, and that you had determined to write no private letters on the subject.

He seemed to me to feel peculiar gratification that your public answer was to be to him, and told me to tell you that the time and manner of your answer must rest with yourself, that he was perfectly satisfied, and that when the answer came he would dispose of it just as you might express the wish that he should &c. &c.

Very soon after he came back to me and said he wished you had written to him, just saying in a line that you would answer, because others might think that was more respectful to him. In my note, which I marked “private,” I had said to him that I did not think it best to publish the fact that you was to write to him upon that subject, because it was never beneficial to awaken curiosity and expectation about a paper of that sect before it appeared, and because our opponents would take advantage of that Knowledge to Keep in the dark as to their position and that of their candidate, until they had seen your Course; taking care to say to him that these suggestions were mine, and were wholly unknown to you. His expression of a wish for a line from you induced me to think that he had acted under the advice of others, and that he was unwilling to show my note to his advisers. I made a remark which showed him my thoughts, and he said one person, and one only in the world Knew that he had written to you, that he could not show my note to that person &c. &c. but did not name the person. He then suggested that I should write and ask you if you if you had any objection to write to him such a line, dating it back if you pleased, so as to seem to be written as soon as you got his letter. I told him if he thought it important I could make the proposition to you and let you do as you chose, but that I thought it not worth while. I then suggested to him to write himself to you, and to make his apology for doing so the withdrawal of the last paragraph of his letter, which I told him, if the correspondence should be published, the whigs would say was a threat. He said it was not so intended. I told him I had the Copy in my room, but was busy then and would show it to him as soon as I could get leisure. He said he would call and see it, and left me, since which I have not seen him. I give you this detail, because I have not been able to make up my own mind perfectly satisfactorily, as to the man and his bona fides, since these conversations.

He was once a methodist preacher, but has been, for some years, a politician, has been par excellence a Van Buren man in Mississippi, as he says, in 1840 and from that time to this. He is light, noise, excitable, and indiscreet; but my <better> <insinuation> is to believe that his greatest interest is the consequence he anticipates to derive to himself, from being the party to this correspondence, and that his singular request proceeded from a desire to secure that benefit beyond possibility, by a letter from your own hand, and to have the evidence to show confidentially perhaps to everybody, before the letter could come. Yet I may do him great injustice in this construction of the matter, and I may have too much charity towards him.

The nomination of Charles G. Ferris for collector of the Port of New York is sent to us this day!

Mr. Tilden will visit you, in a few days, to consult you about the establishment of a cheap paper in New York. I have not time to write to you about it, but I have talked fully with him, and he can tell you all my views upon the subject. He will probably, too, show you a letter I write to him today, which will give you, with what he can verbally communicate, all I could say myself. The suggestion first came from our Western friends, Judge <illegible> most especially, but since the new excitement has grown up here, and especially since ways and means are talked about, their ardour appears abated. Do not think I have any feeling or wish on the subject, farther that the necessities of our case and the service of our cause. If we do not want it for them, I do not want it at all. Burn this! I have not a moment to say more, and you will say enough, enough. 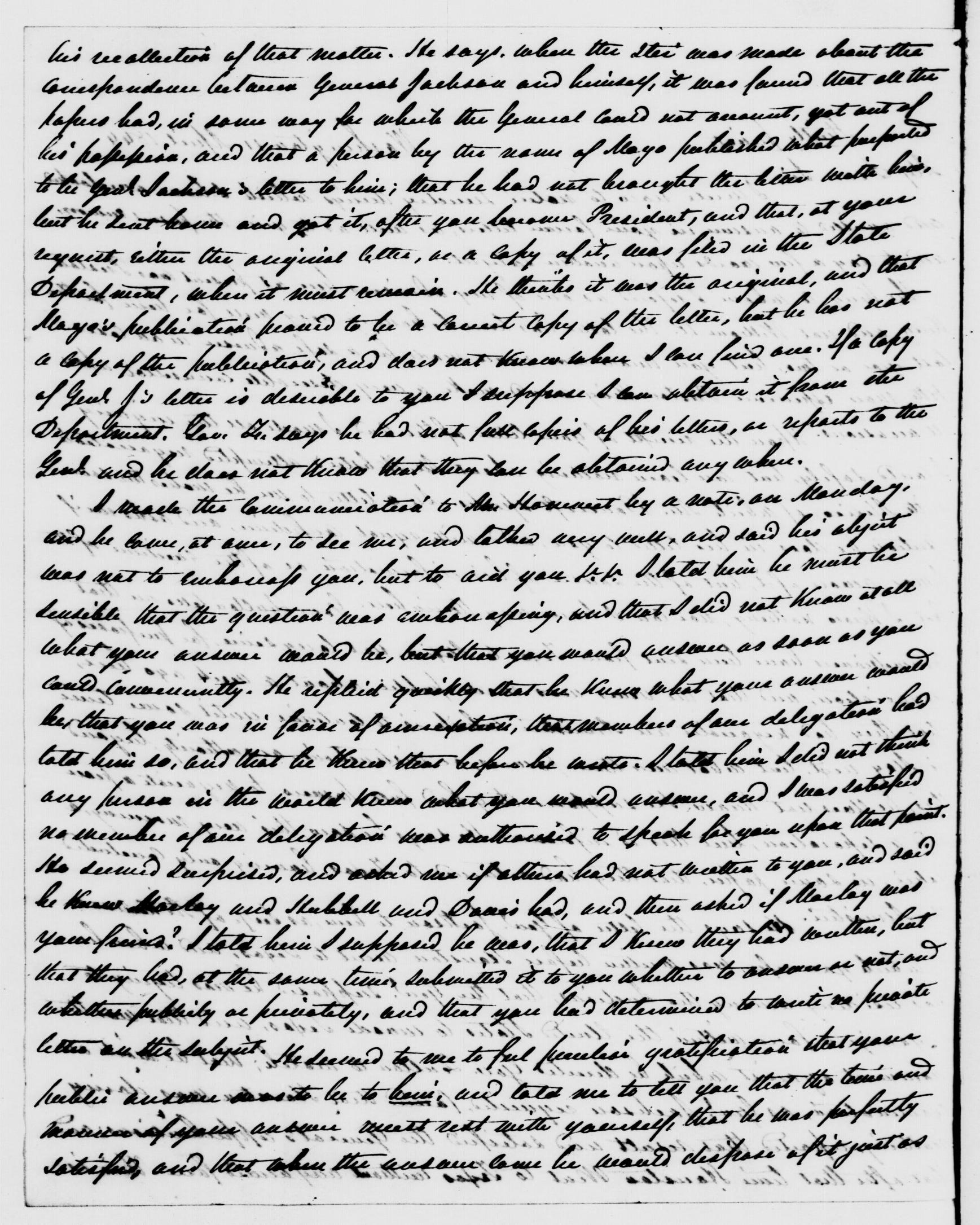 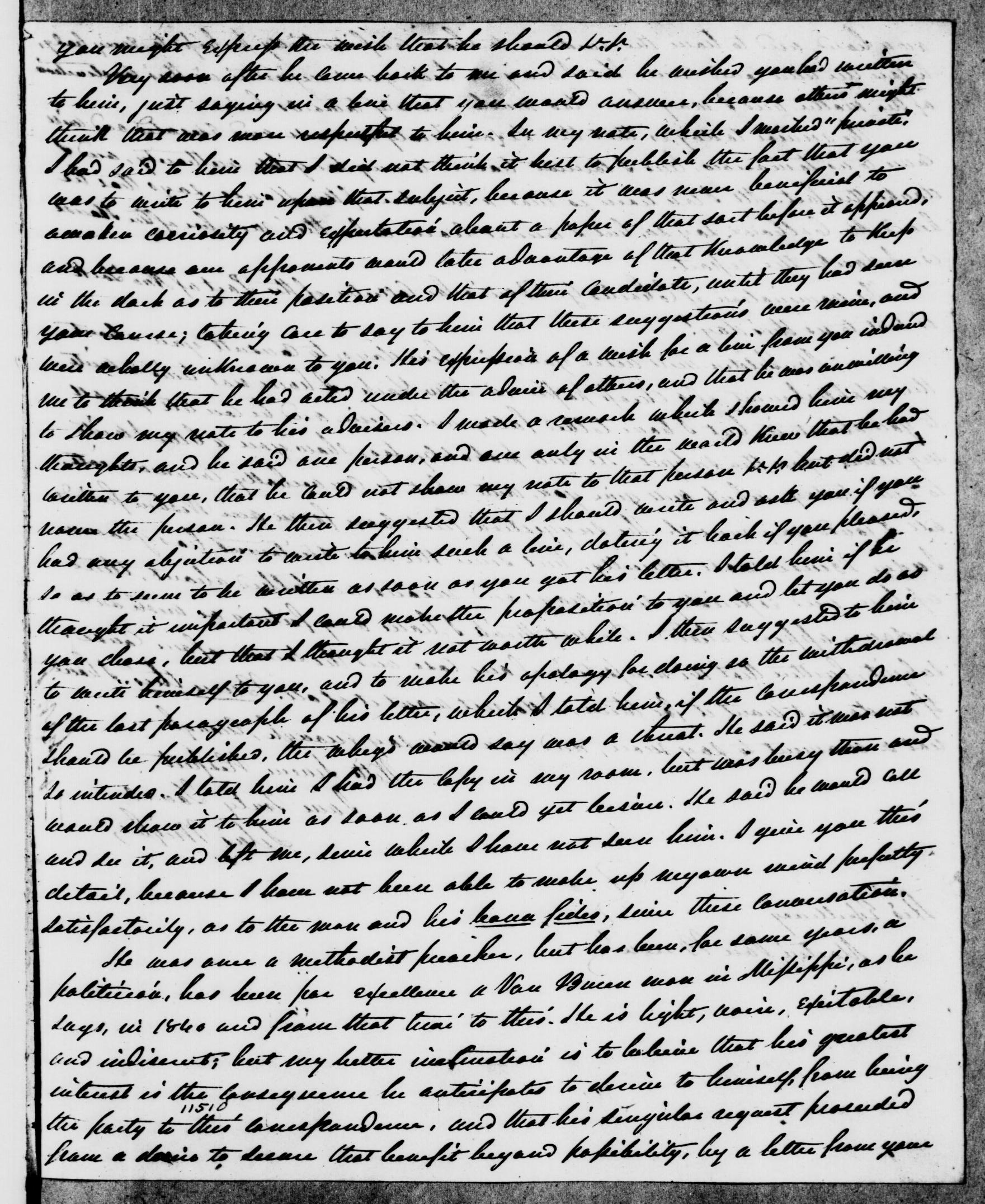 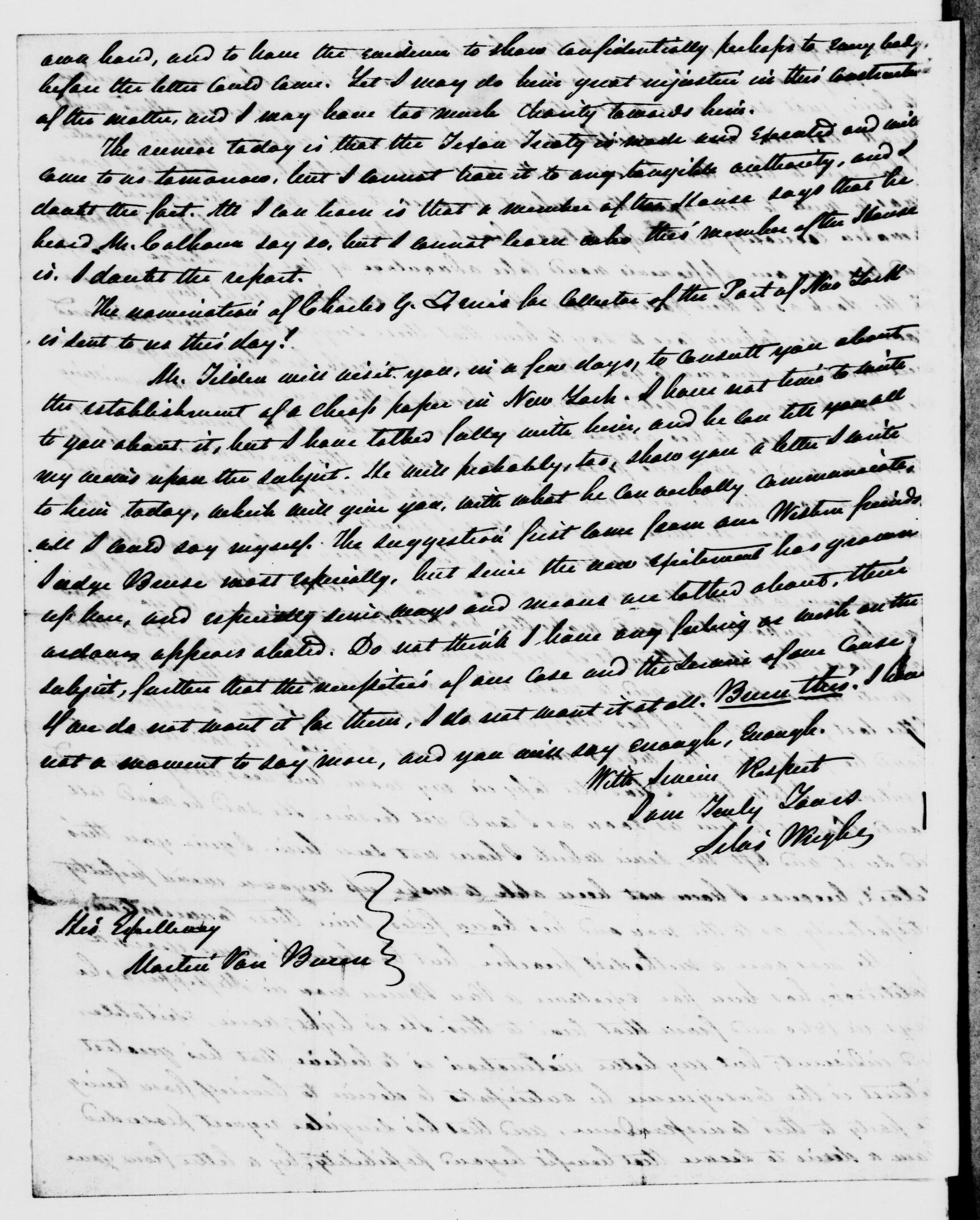