I have the pleasure to acknowledge the receipt of your kind & much esteemd favour of the 11th ultimo. I assure my dr Sir, that I am well apprised of your situation, and never expect your reply to any letter I write you, until your leisure may permit, which I am aware that seldom occurs.

I have been an attentive observer of the passing political scenes at the Capital, and if my judgtment and experience do not fail me, you may rest assured that the opposition has done themselves great injury in the manner in which they have appointed the investigating committee and particularly by having that notorious scamp, Wise, upon it who has prejudged, & charged the Secretary of the Treasury with impeachable offences. The secretary of the Treasury has nothing to fear, nor has the administration, the truth will out, and it will shew when out, that there are more of the opposition concerned in this defalcation of Swartwout than the public is aware of and I fear some of the subordinate officers, & heads of Bureaus, have been concerned with him in the gambling in stocks. If possible Swartwout & Price should be both brought ^back^ & as severly dealt with as the law would, or could inflict, I never have been as much disappointed, as I have in Swartout & Price. The latter was appointed from the entire & united recommendation of the republican party, and they both ought to be gibbetted. I still think there is upwards of 600,000$ of the merchants bonds, left with the opposition merchants that will be discovered hereafter. I think the time has arrived when public opinion will sustain and require the removal of all public officers who are opposed to the administration and the time has arrived when the Government owes it to its own safety to remove all those who are opposed to the administration and secretely trying to injure it, therefore they ought to be removed.

Altho I regret the course that Mr Rives has taken, it was not altogether unexpected. He and Talmage was determined to be at the head of a new party, & by forming the opposition would come into power, but their fate will be that of all traitors and apostates, & Burr & Whites fate will be theirs. I cannot believe the virginia Whiggs will unite in electing Rives; however much they may rejoice in the Treason they will despise the Traitor.

I have noted that part of your letter that relates to your southern tour & Col Polks views thereon. I am unable to say how far the view of Col Polk may be correct, as my course have been always to put my enemies at defience, and pursue my own course. If my health permits I will meet you at Memphis, if that should be your rout, and escort you to the Hermitage, stopping at such intermediate points as may be convenient. Unless indeed, Col Polks Ideas should be upon consultation believed to be best, which at present I cannot well see the force of when a visit to me at the Hermitage surely could not be used to disadvantage the cause. It is true, the next august elections are of the highest importance to our State, but if we could get suitable candidates out for congress we would carry every district in the State, but in this congressional district, we have as yet got no candi. Mr Burton, since the withdrawal of Carroll, has been called upon by the principle republicans in Davidson to let his name be run for Congress. If he accepts the call he will beat Bell easy. If he does not it is at present doubtfull whether Bell will be opposed. Shamefull tho true. I still hope Burton may yield to the call.

We are now experiencing as cold weather as any we have had this winter. My son & Major A.J. Donelson are both in the Mississippi state preparing cotton farms. My little family are visitted with scarlet fever, all unite with me in kind salutations to you & yours.

I am happy to hear that Major Forsyth & Mr. Poinsett will accompany you, present me kindly to them & their families, & say to them we will hail them welcome with you & yours at the Hermitage 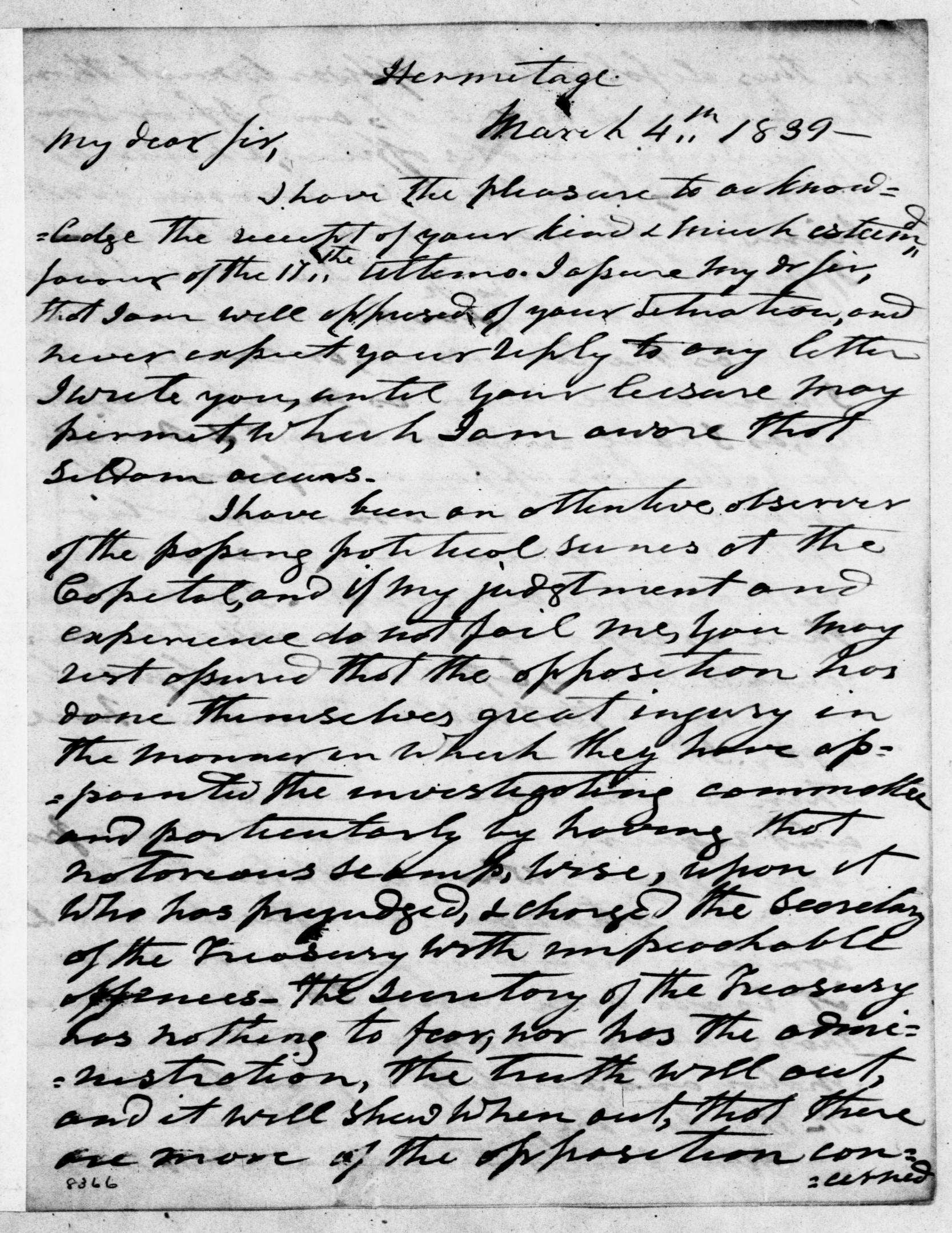 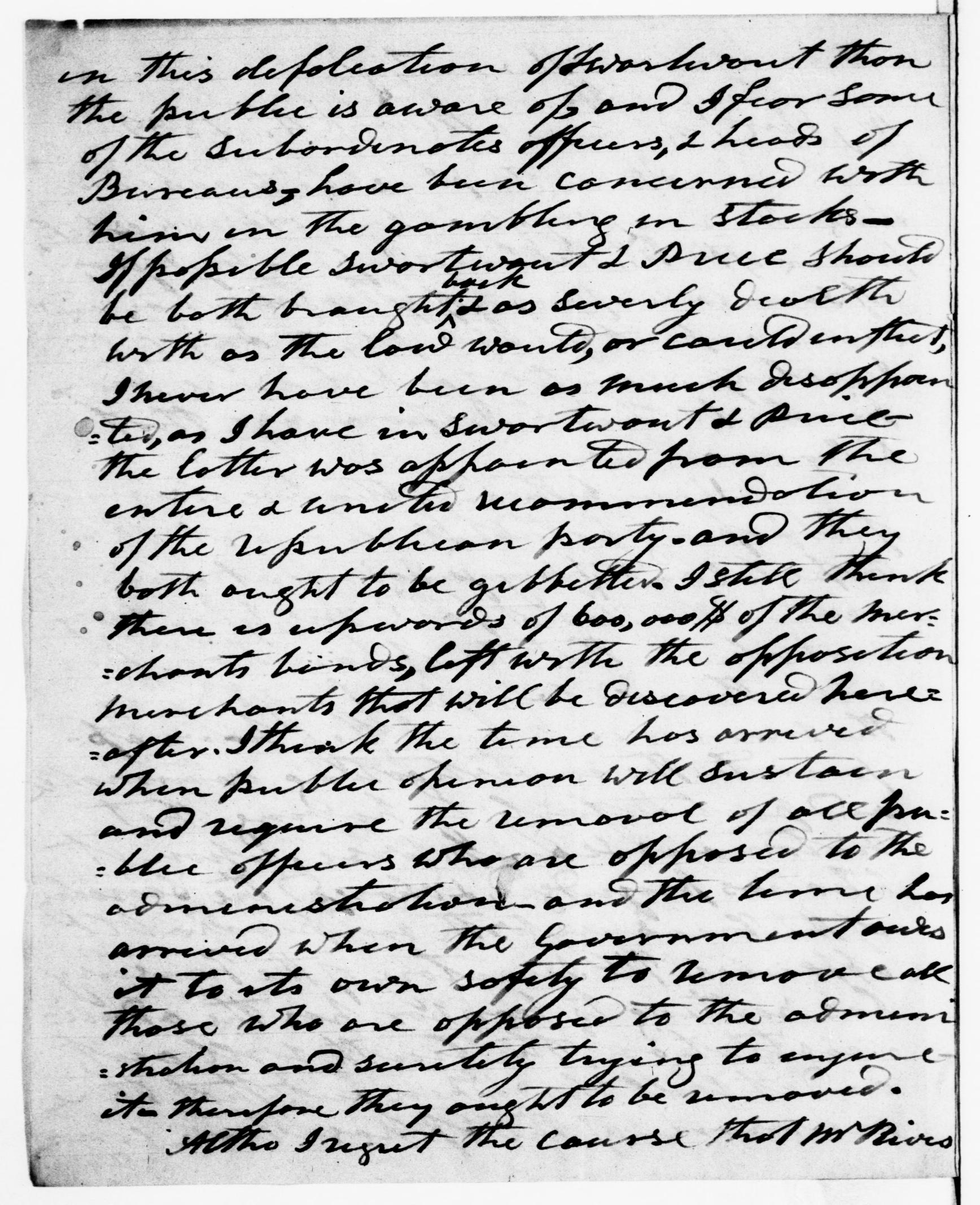 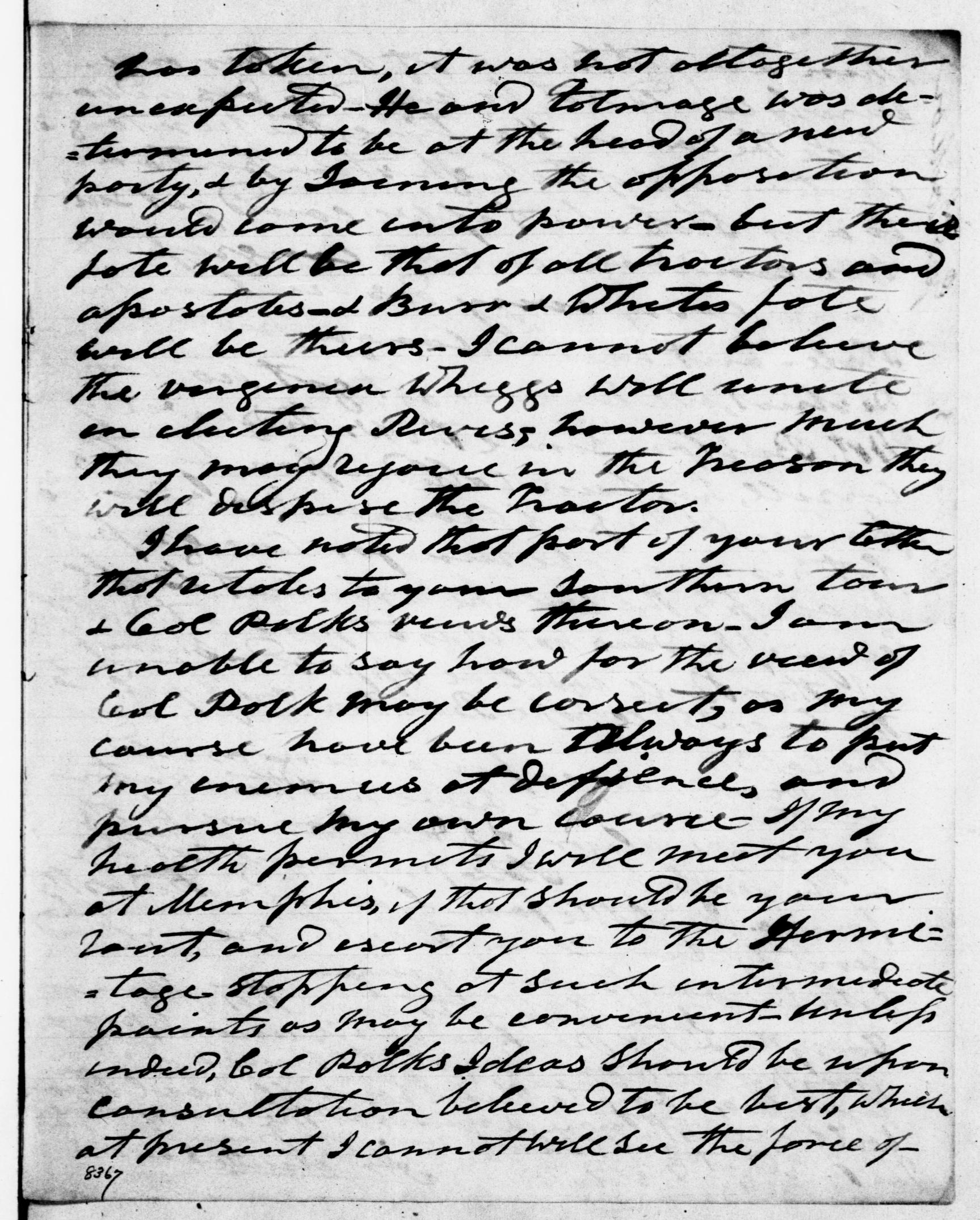 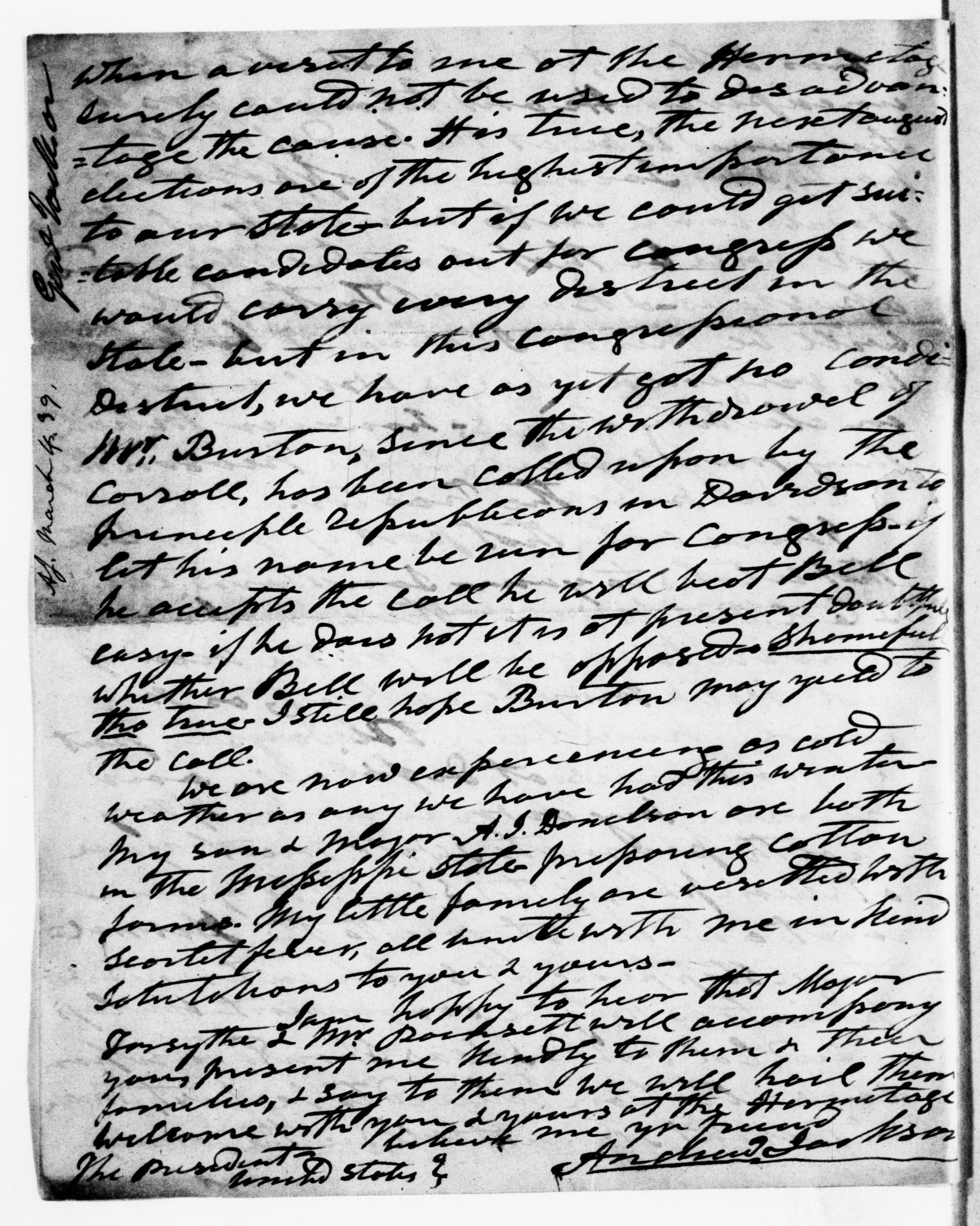 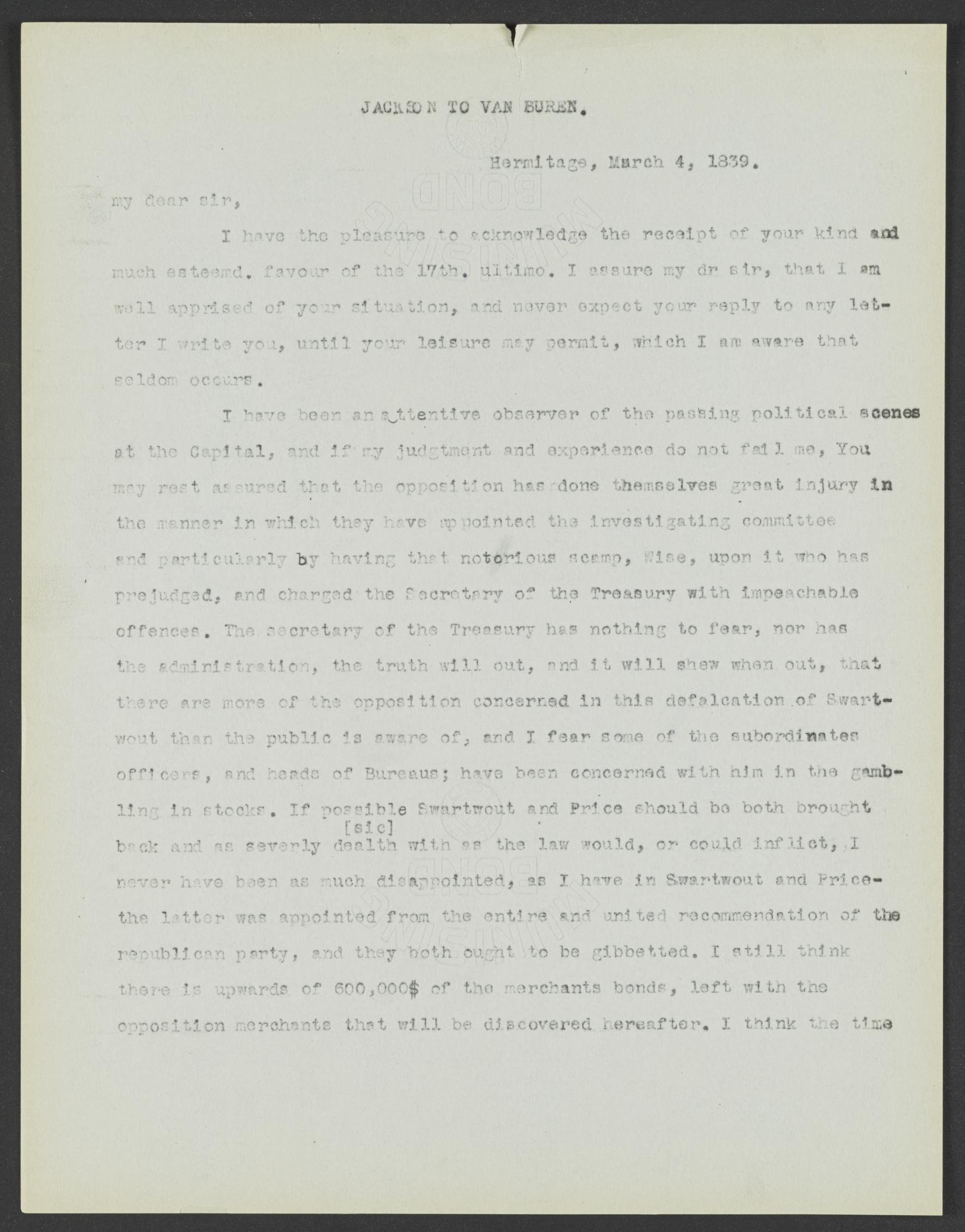 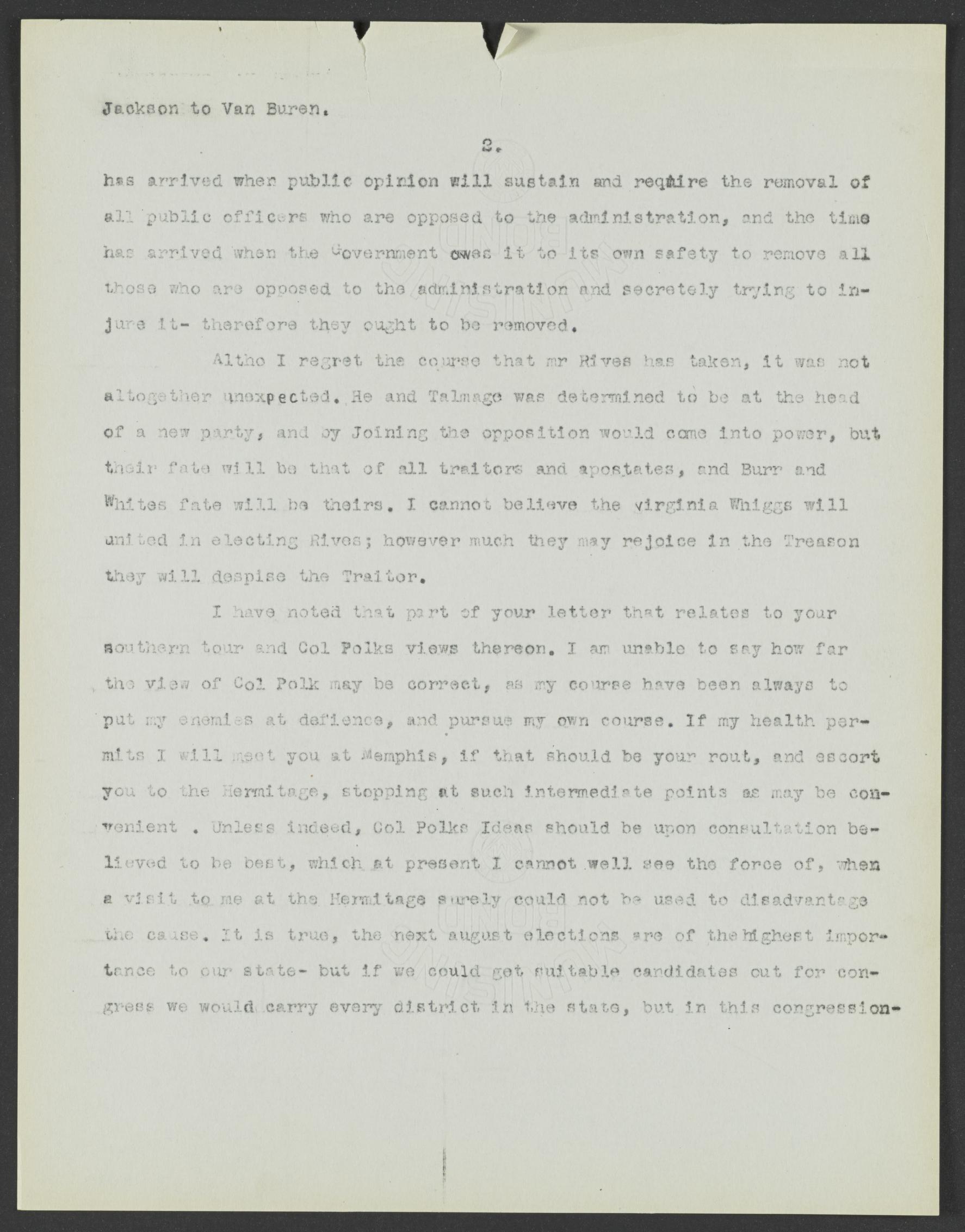 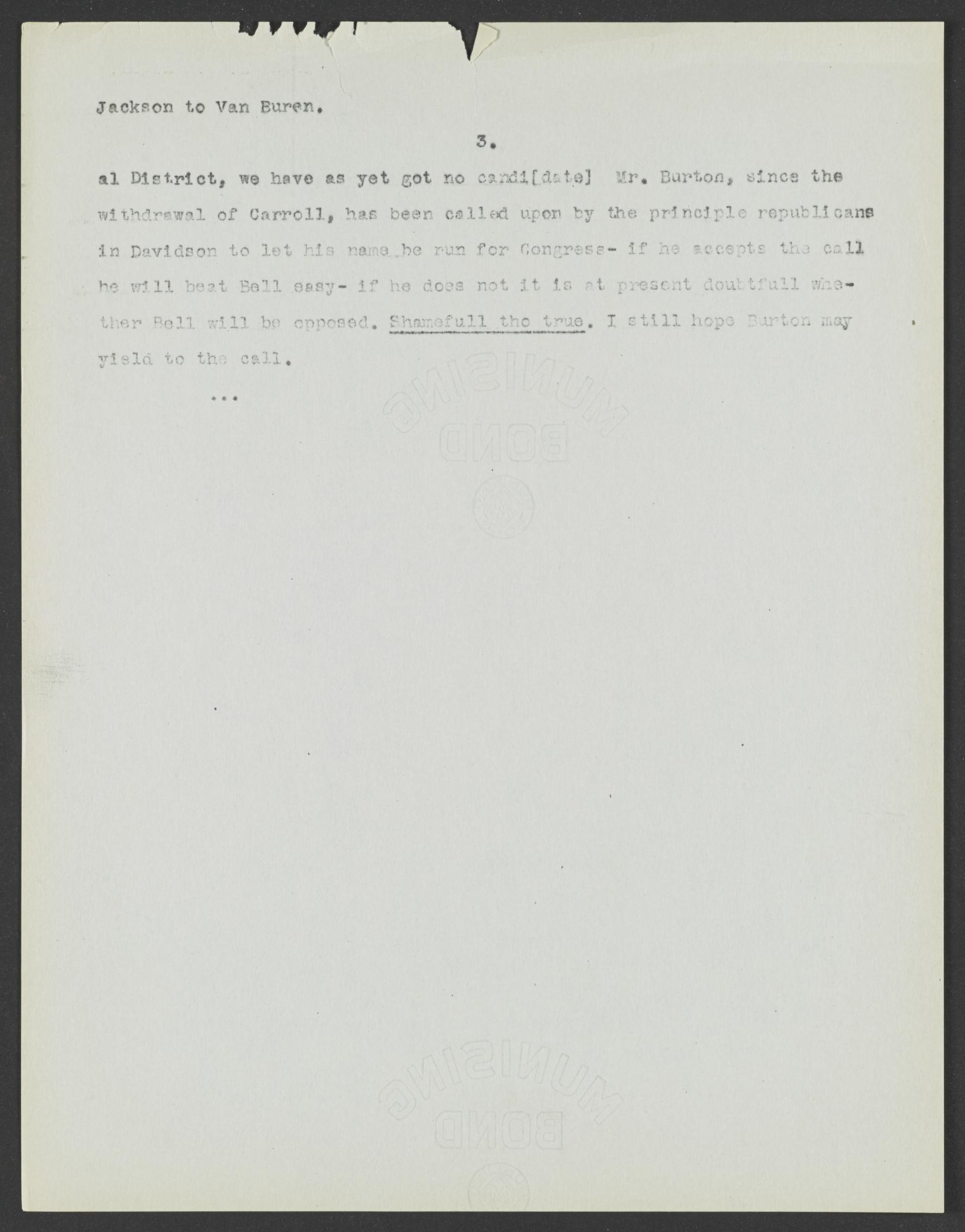