If I were not sure that you are sensible of the pressure of my business, & good enough to make the proper allowances, I should be unhappy on account of ^my^ seeming neglect. I have moreover been prevented from writing for some days by the uncertainty which has hung over my summer movements, of which I desired to apprise you. Our friend Mr. Polk was so strongly impressed with the bad effects that might result from my visit to Tennessee before the election, that I have, at times, been prepared to abandon the whole trip. We have however at last come to the conclusion that I shall god willing, make the excursion. I had marked out for myself, upon condition, that so much of it as relates to Tennessee shall be under the absolute direction of his yourself & him, after he has had an opportunity of seeing you, which he designs to do on immediately after ^on^ his return. My plan is to leave here on the first of April for new orleans by the way of Mobile, to receive there his & your advice in respect to Tennessee, to take all the Southwestern, & Western States on my return to Washington, by the way of Lake Erie & Albany. Mr. Poinsett will certainly, & Mr Forsyth probably, accompany me the principal part of the way. The former will visit the Western & other parts, & we shall endeavor to give to the journey as much an air of business, & as little political, as possible. It is unnecessary to say, that the portion of it in which I feel the greatest interest, is that which conducts me to the Hermitage, & which promises me the society, for a season, of its possessors. Two weeks more & Congress must be off. The probability is that the Independent Treasury Bill will not be acted upon, at least not definitively. I am well satisfied, that whatever prejudice the delay may be to the public interest, it will not prejudice the name or ultimate success of the measure. Indeed it is most obvious that the public mind is setting in the right direction in all quarters; and were it not for the windfall of the defalcation of Swartwort & Co. the opposition would at this moment ^have^ been without the weapons of warfare. It is now the only strin[g] that pull upon, & can last them a little while. The investigating Committee will end in smoke, Talmadg[e] will not I believe be senator, & whethe[r] Rives is or not, the State, instead of being lost, will be beyond all doubt saved by his secession.

I am quite certain that a finer spirit has not for years existed in Virginia than which is now getting up there, and of Penn. the Whigs have no longer a particle of hope. The money power in Nyork is strong, as I have always anticipated it would in a crisis like that we have had to encounter, but I am strong in the conviction that she will in good time come right. It is obviously the intention of the Southern & Western Whigs, & of many at the north, to drive Genl. Harrison off the course, & make Mr Clay their only candidate. In this I think they will succeed, if they <avoid> <losing> on the nomination before the August elections at the South & West, or if they do not go agt. Mr. Clays friends. A better candidate we could not desire. I could not, without apparent affectation, impress you with a just sense of the composure with which I contemplate the result. If I did not flatter myself that on the main point, a fulfilment of the expectations of those who elected me, I am safe, I could not certainly feel so easy in the matter. But having as I hope thus far kept on some ground in that respect, & determined not to leave it knowingly, all the rest is but an affair of circumstances, comparatively of trifling importance, & which may be acquiesced in without pain, or great regret.

Mr & Mrs. Polk took a social dinner with me yesterday & we had the pleasure of drinking your health with all our hearts. They are both in good health & fine spirits. Remember me kindly to Mr & Mrs. Jackson, & to Major Donelson, & to the children of all, & believe me to be

P.S. Mr Butler, my sons & daughter (who proves to be every thing I could desire) request to be affectionately remembered to you & yours. John has not yet retd but is expected in April. He has paid an interesting visit to Ireland & been most cordially recd. He is I believe at this time in Paris.

We will talk about Genl. Armstrongs affair when we meet. 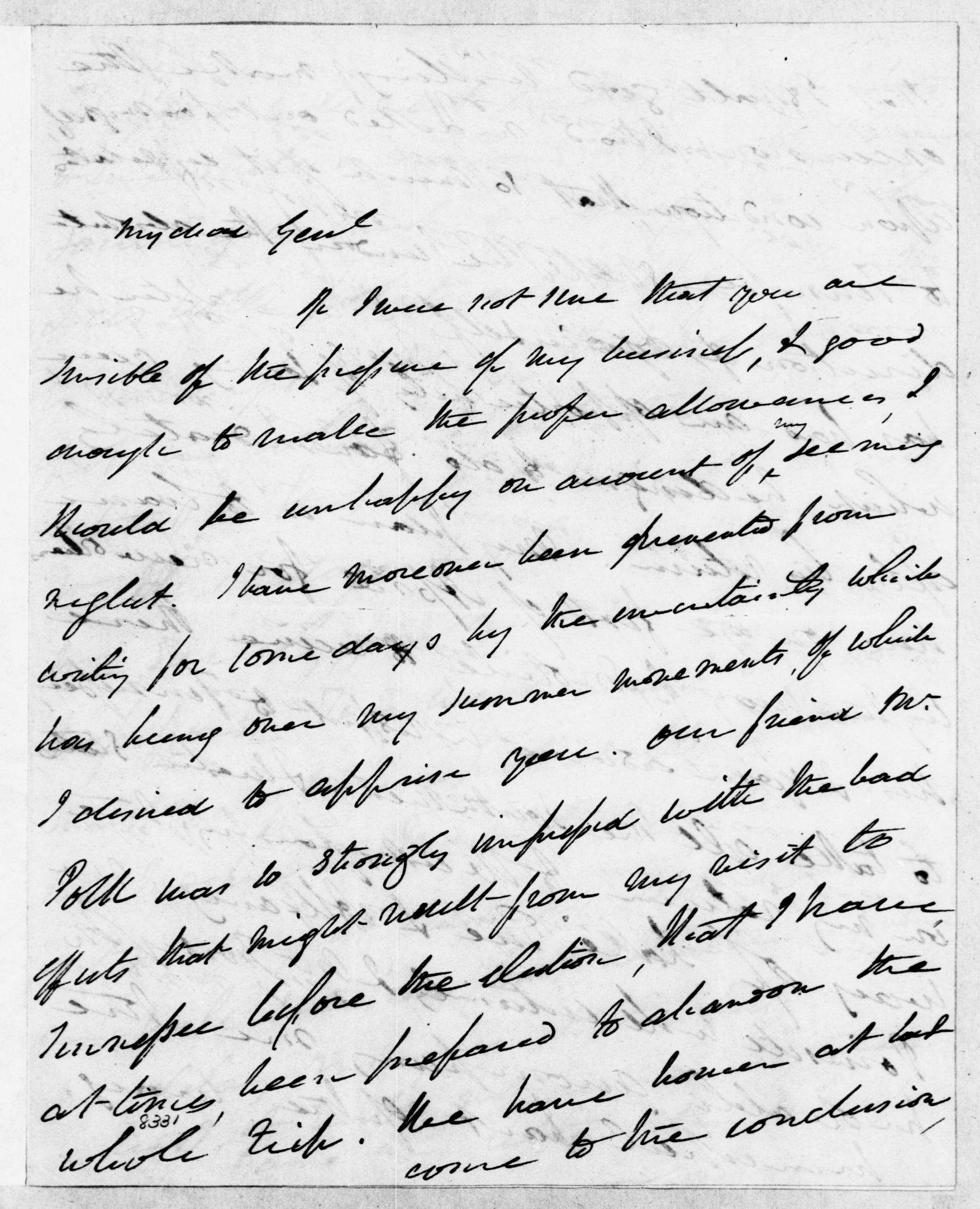 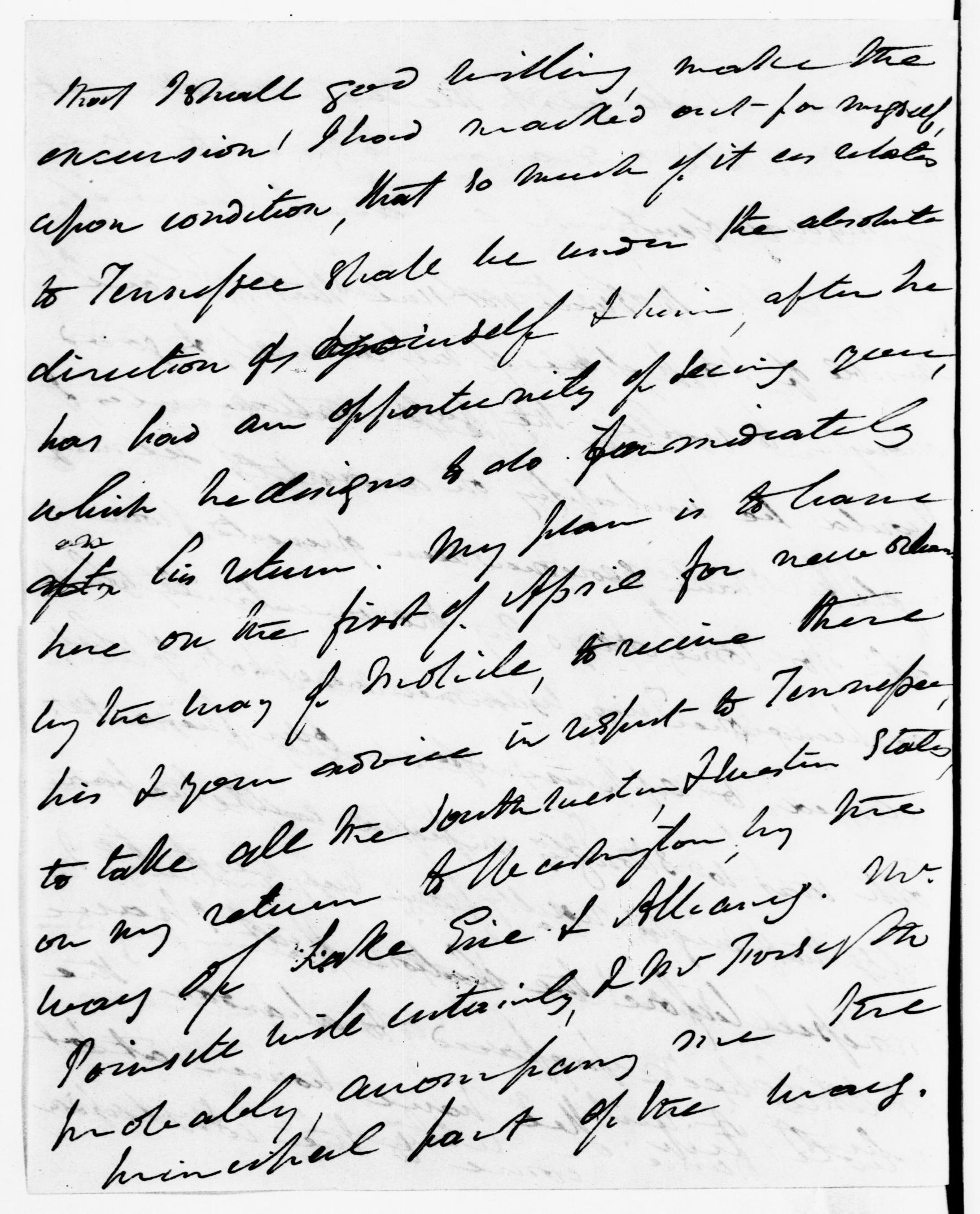 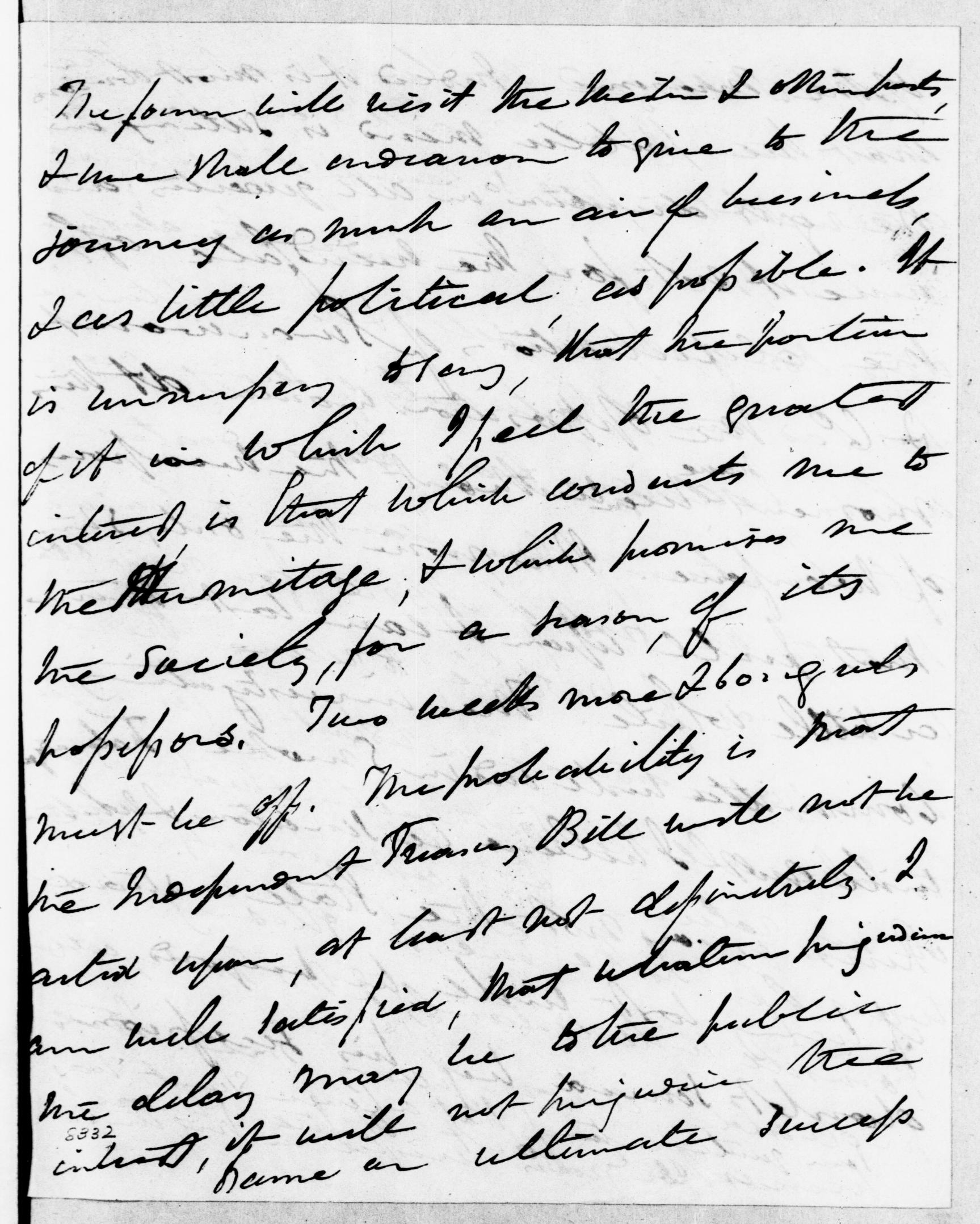 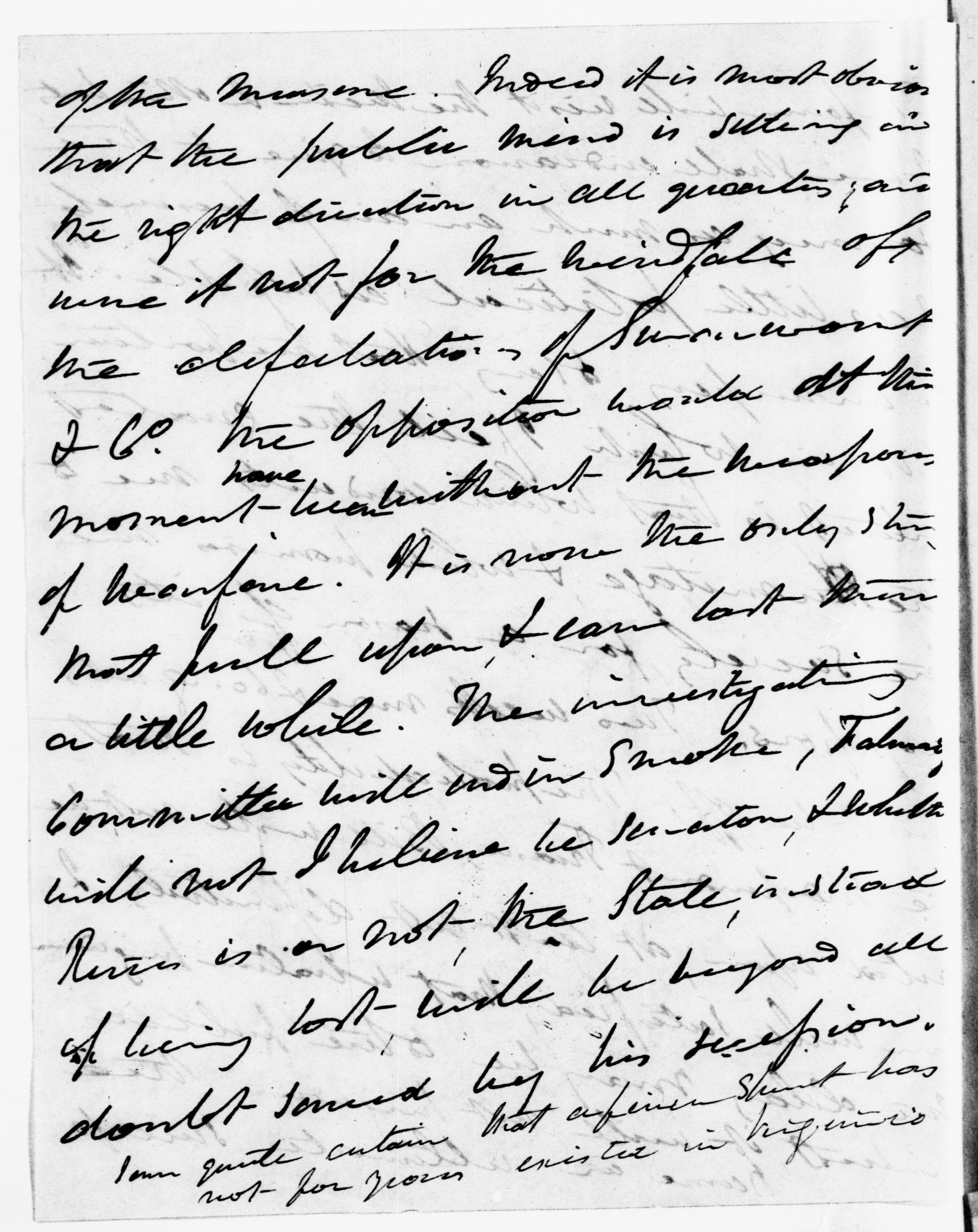 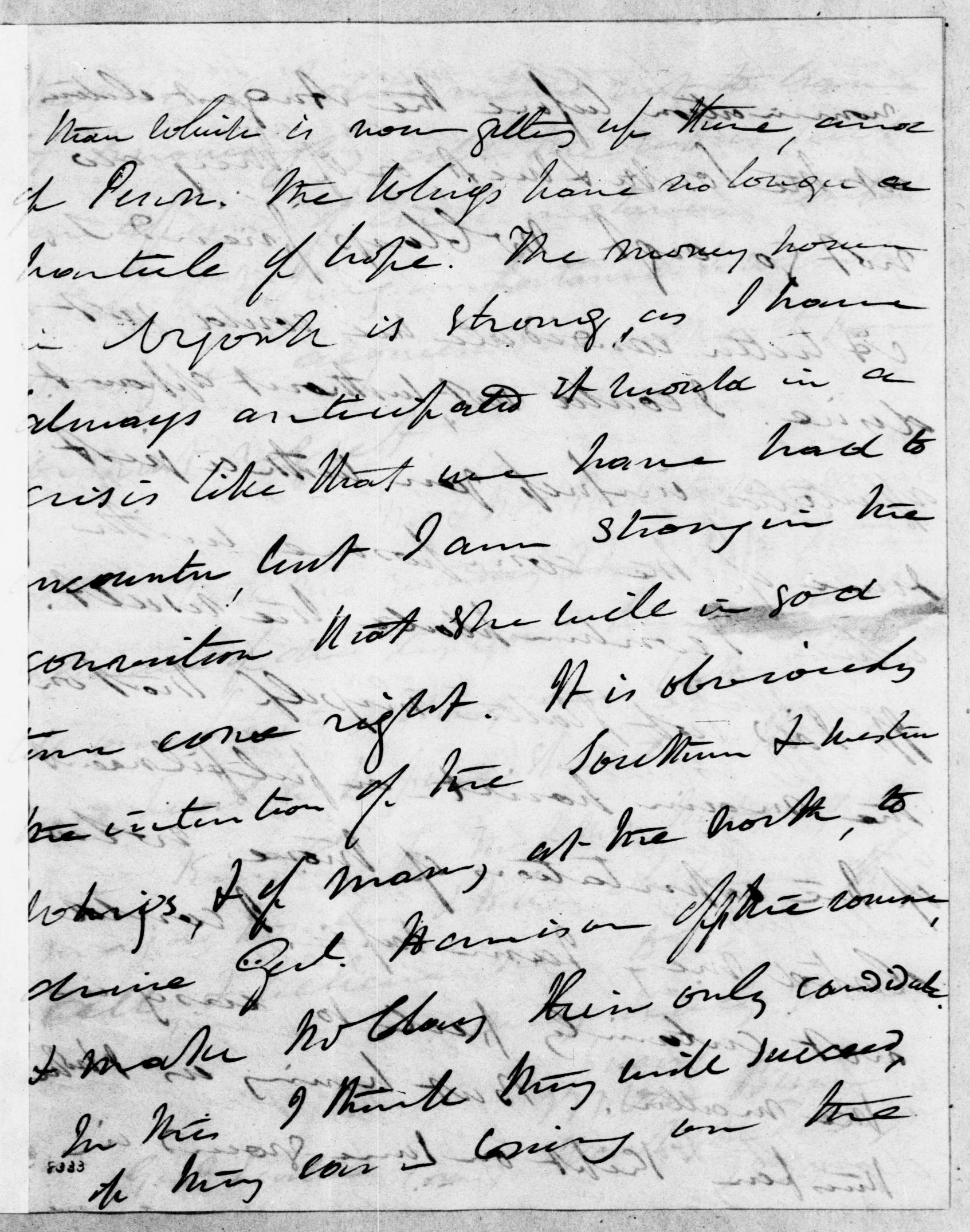 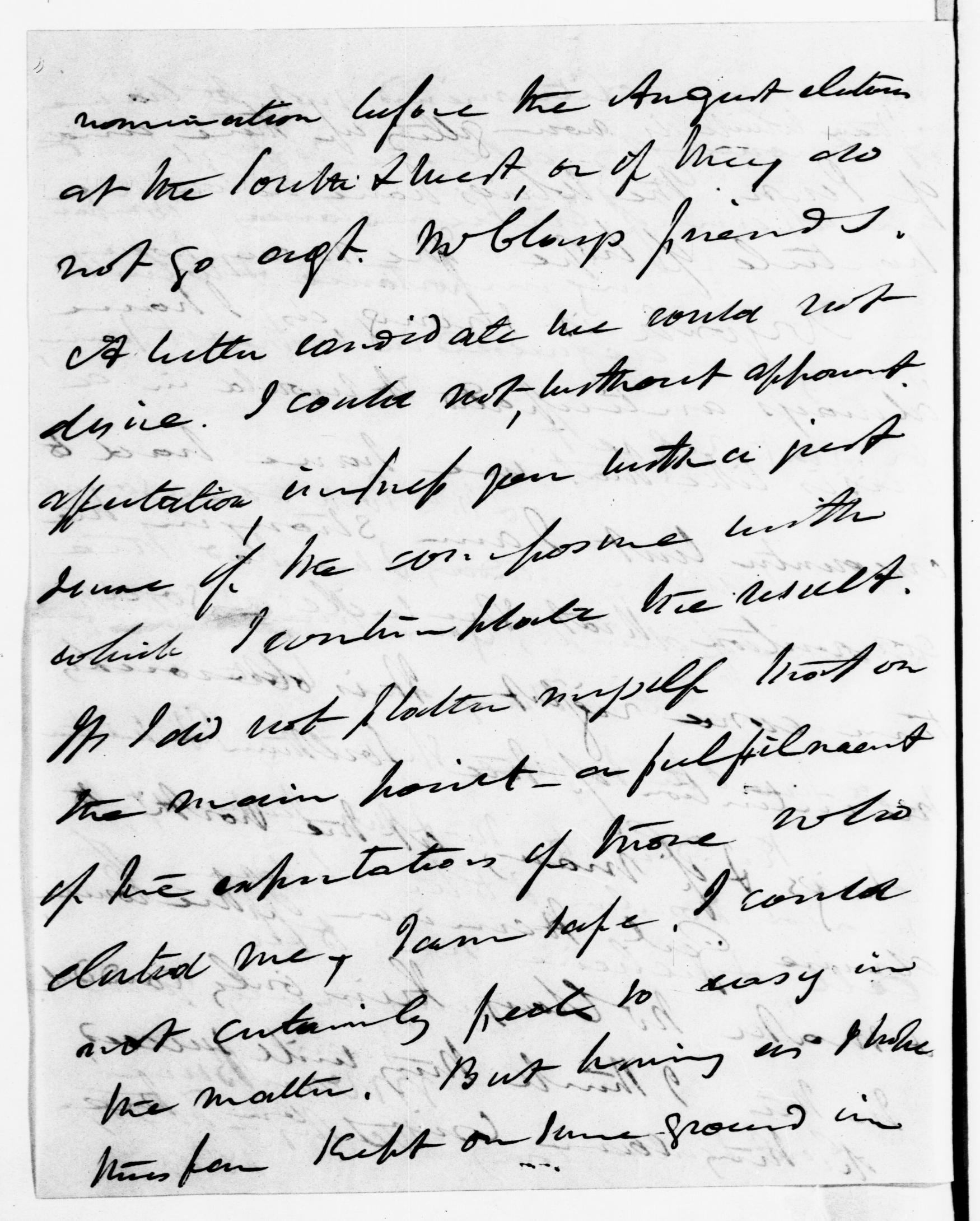 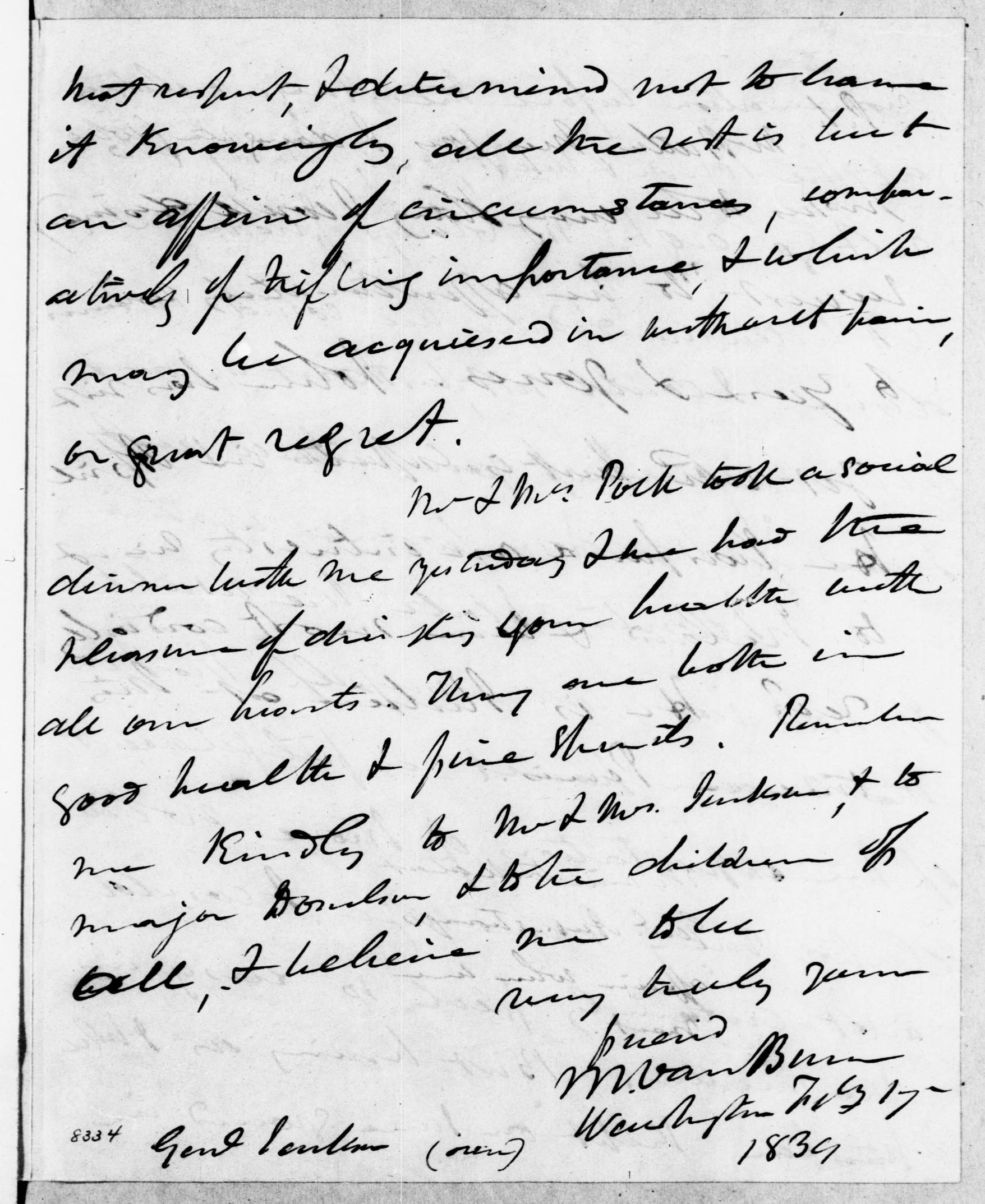 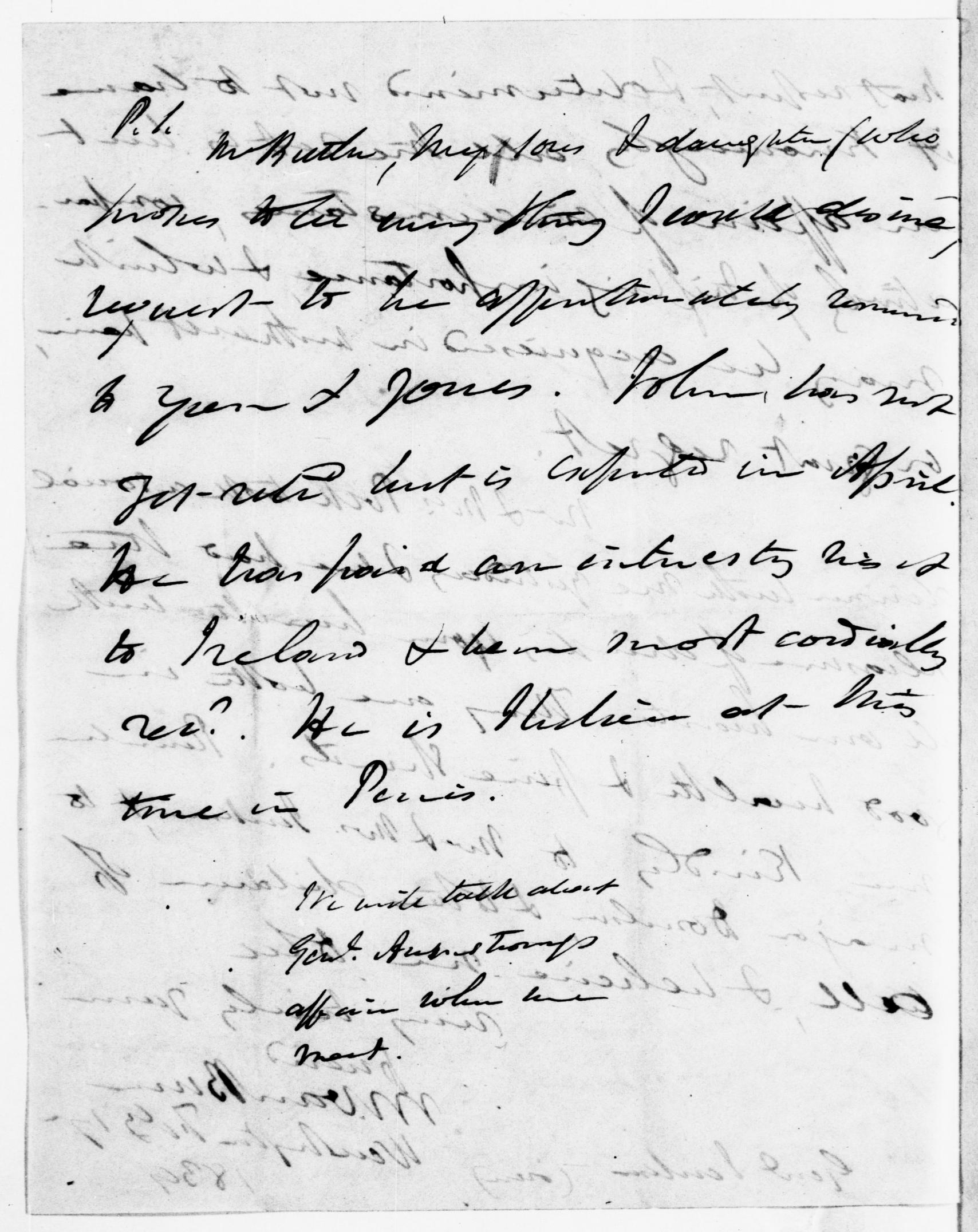 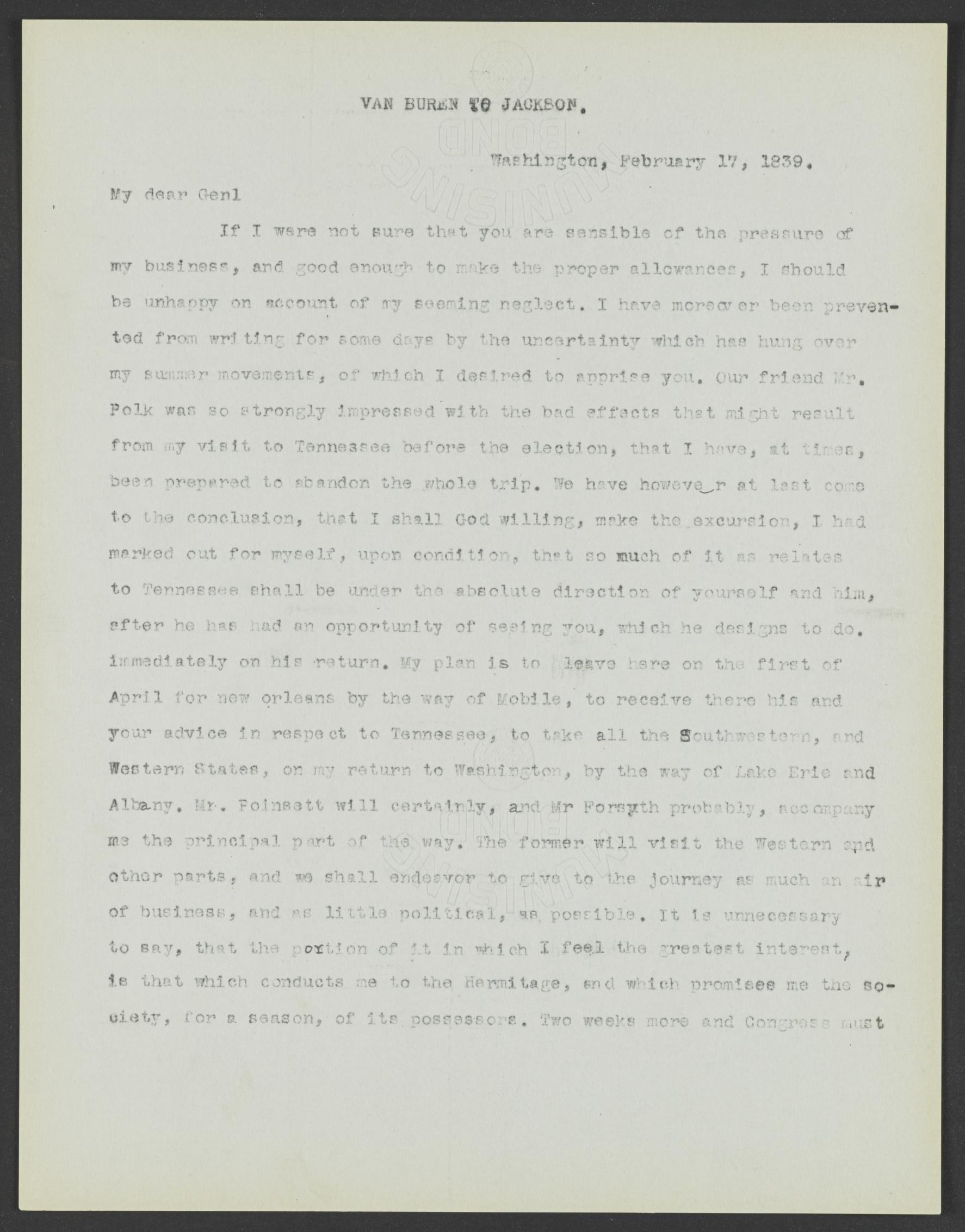 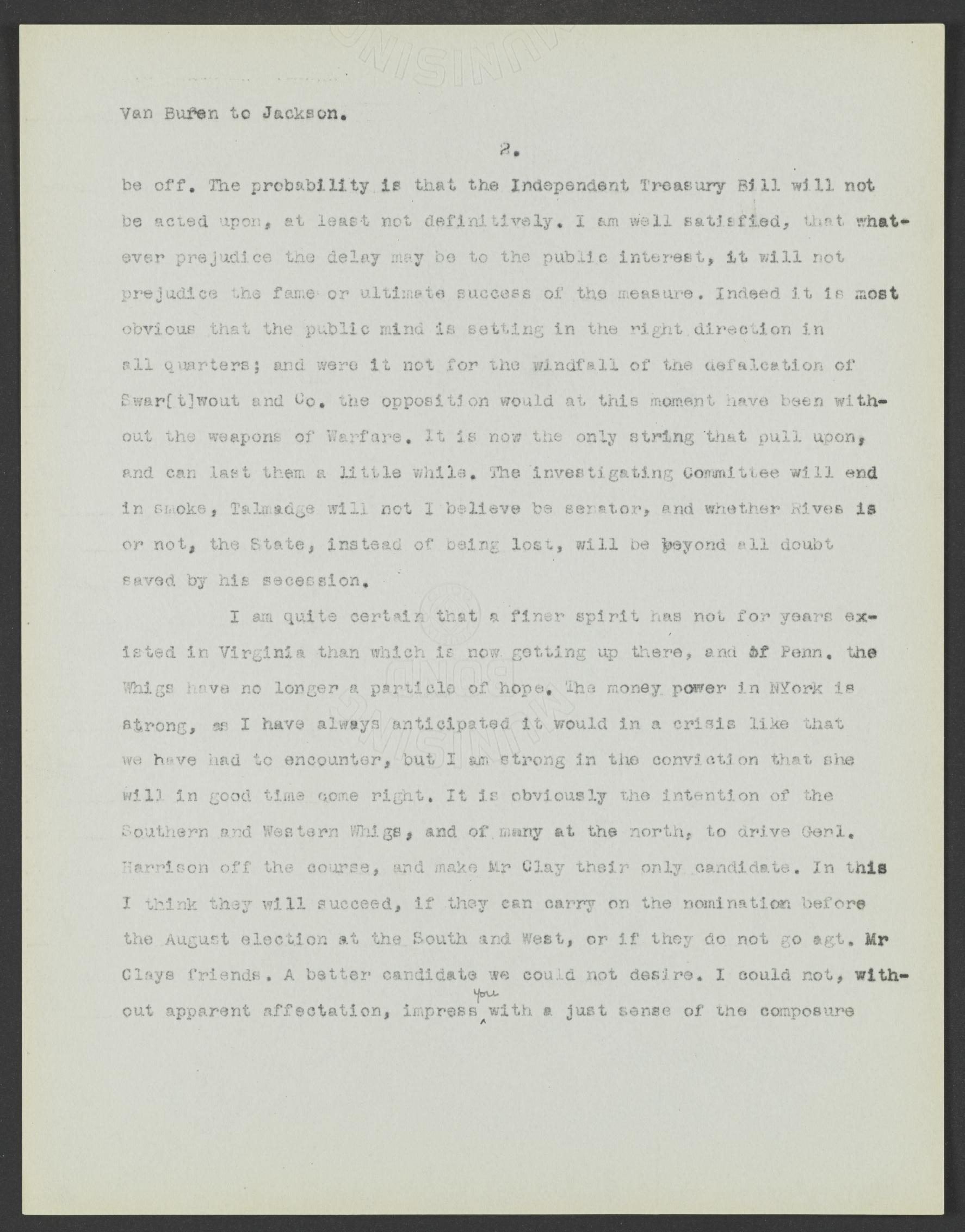 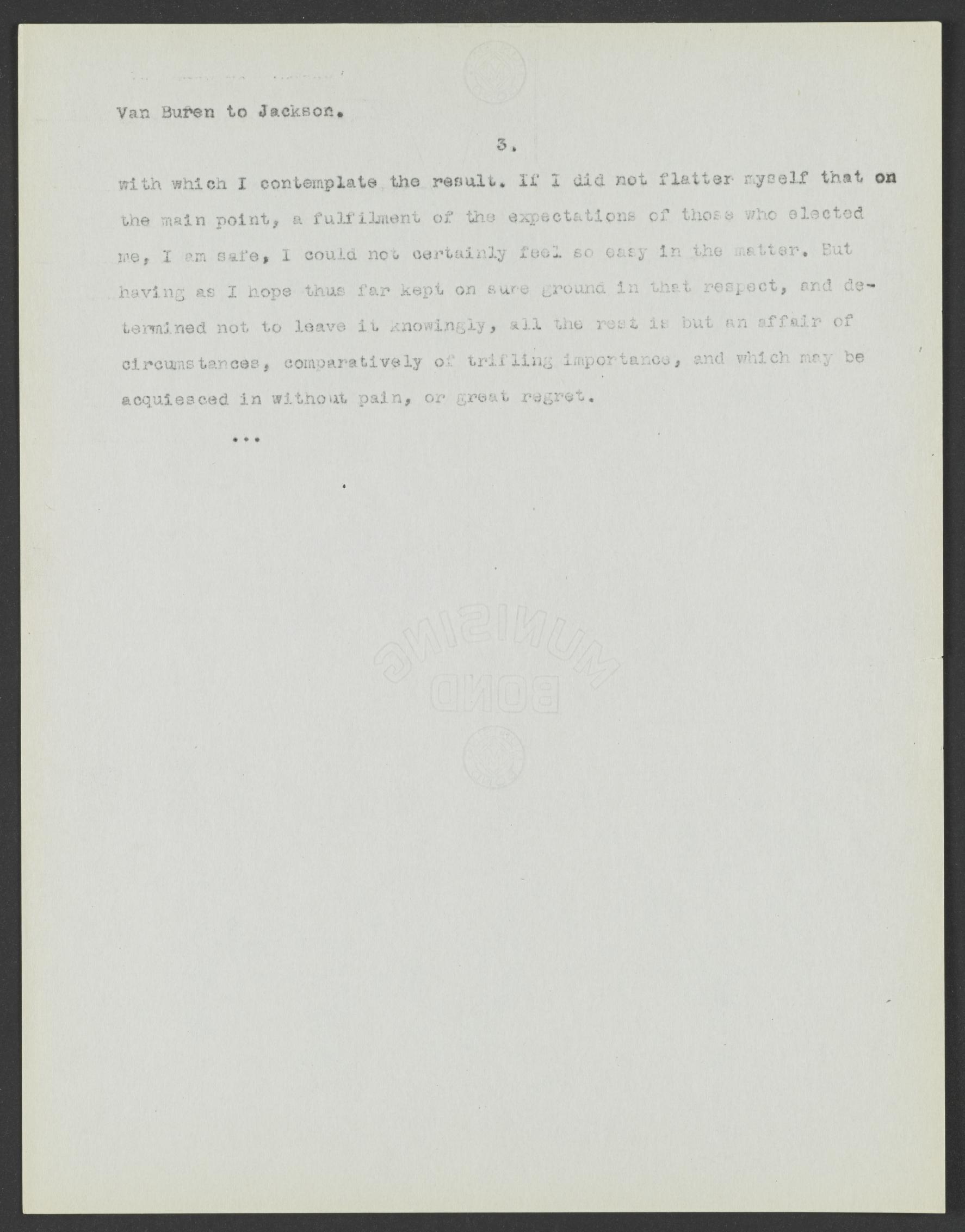