I have had it in contemplation for some time past to have written you, on the subject of the unexampled pressure on the money market, but have been deterred from doing so from the fact that our limited acquaintance would hardly authorize me in so doing, But as the pressure continues not only unabated, and every revolving sun finds it more & more aggravated, I have therefore finally concluded to waive the delicacy of the measure and to state to you as fully as the limits of a letter will permit, the causes, the remedy and the effects of a continuation of the present system on your ulterior aspirations,

In the first place then the present pressure has undoubtedly grown out of the removal of the public deposites in connection with the renewal of the Bank charter, and the remedy is a restoration of the deposites and the renewal of the charter, Taking it for granted that you are aware of the extent of the pressure in our commercial cities, I will content myself by barely remarking on that branch of the subject that the best of mercantile paper ranges at an interest from 1 1/2 to 3 pr.ct. a month, I have heard of instances where loans have been made at a quarter pr.ct. a day equal to 70 pr.ct.pr.ann, The paper on which loans of the latter description were made has been stated to me, and the security I deem unquestionable, you would naturally enquire how is it possible that consequences so disastrous should spring from causes which appear so trifling on the surface. This measure on the part of the Govt. has completely dislocated the exchanges of the country injured the credit of our public stock abroad, of which an immense amount is held in England, Where they reason that our currency will be vitiated in the destruction of the Bank, Hence large amounts of our stocks have been returned to us from abroad, and forced on the market,

The remedy is simple the renewal of the Bank charter with a restoration of the <accruing> revenue of the Govt. To restore that which is now in the receiving Banks would produce a positive evil, I am confident that the President would not have pursued the course he has in reference to the Bank could he have anticipated the one thousandth part the misery his measures in that respect have already produced, and the Country is but just beginning to feel it, We are but frail mortals and to err is human, but to persist in error after one is satisfied that he is in the wrong is wicked in the extreme, even so far as it affects one self only, But in the case under consideration it is beyond all parallel, It is the sufferings sufferings of ten millions of people caused by the act of one man,

The prosperity of the people of this country was at the date of the removal of the public deposits, greater than you and I had ever witnessed. In a moment as it were the earthen vessel which had not only produced but mainly contributed to this felicitous state of things was dashed to the ground and broken in a thousand fragments, and what solid reason can be given in justification of a measure fraught with such disastrous effects, I have read with deep attention the reasons assigned by the immediate actors in the scene, as likewise those by whom they are justified on the floor of Congress, and they utterly fail to convince my understanding either as to the policy justice or expediency of the measure,

In respect to the last branch of enquiry viz the political effect of those measures on yourself personally. In analizing which I could observe that business of all kinds in this place is completely at a stand, Many Merchants are closing up their concerns, some are resting as it were on their oars, Those engaged in the commission live very many of whom decline receiving consignments so far as it can with propriety be avoided, and I learn that in almost all cases they decline advancing even their paper, based on the consignment of Merchandize, As it respects the Mechanics Artizans and Manufacturers they are if possible in a worse predicament, Those classes are dismissing their workmen by hundreds at a time, An instance of which was mentioned to me a few days since, which I will repeat, A Mechanic extensively engaged in business dismissed seventy five of his workmen stating that he could not raise money to pay their wages, It is needless to add that they left their employer greatly dejected, Patterson N. Jersey that once thriving manufacturing place, is nearly prostrated, and hundreds of workmen are suddenly thrown out of employ at this inclement season of the year,

In consequence of the Memorial which has been recently circulated for signatures in this place, I have had an opportunity of ascertaining the state of public opinion on this question, and I assure you with all sincerity, that men who but a few weeks since spoke of the President as something more than human, at this time firmly execreate him, Were the election for President now to take place I am confident that in this City at least three fourths of the votes would be cast against the General,

Whatever may have been the character of the previous measures of this Administration which however it is not my intention to dwell upon, The Machinery of party has been so arranged and managed that the party has more than maintained its ground, This has been owing to the indirect effect of the measures alluded to upon the interests of the people, But the ground in that particular is now changed, There are none so elevated nor none so low but feel the blighting influence growing out of the quarrel with the Bank, The tables have completely changed on account of the deposites and the attempt to break the Savannah Branch, All the suffering and odium thereby engendered is almost universally ascribed to the Administration, However the Bank may diminish its discounts it is generally considered as attributable to the hostile attitude of the Govt. as acting in self defence and self preservation,

If the present state of things is to continue to the end of the charter, (and there can be no relief other than in the renewal of the charter) the sufferings we endure in the atlantic cities will reach every town and hamlet in the Union, and sweep like a volcano the present party in power out of existence, Should the Bank be finally put down it will be at an expence of several hundred Millions of dollars, you can judge whether the people will be inclined to sustain any party at such a sacrifice, indeed the feeling in the working classes is getting to be such that it would not surprize me if in less than ninety days they should demand at the point of the bayonet a redress of their grievances, When people are in a starving condition they will break asunder not only the chains and shackles of party, but coolly and deliberately violate the laws of the land,

I hope you will not be deceived by the expression of the Legislature of this and other States, it is no criterion of public opinion, and furthermore when the members were elected their constituents had not felt the effects of the measures their representatives have approbated, Nor would I place much reliance as to public opinion, either on the party press, heated partizans or party leaders, neither dare represent the truth as it is for fear of being suspected and consequently excommunicated from the party, The simple restoration of the deposites will not now affect any sensible relief, To produce which it must be connected with the rechartering of the Bank,

On you Sir devolves at this time not only a fearful but sacred responsibility, you have the power if you will but exercise it of carrying the measures herein indicated through the Legislature, even in the face of the veto power, should the President be so obstinate as to resort to it, and thereby become the benefactor of your country, and create a name for yourself and your posterity as imperishable as marble, In return for which rest assured that your Countrymen will elevate you to the highest pitch of honor & power in the Government of their country, Be equally confident that a contrary course will produce mortification and deep and lasting disappointment, There is however no time to be lost, sixty days hence I fear it will be too late to benefit yourself by such a movement,

In conclusion I assure you that I should as soon think of dispensing with the action of the Judiciary as with a National Bank, being firmly of opinion that we can get along quite as well without the one as the other, and I am confident that in less than two years a very large majority of the people will arrive at similar conclusions.

With Sentiments of Sincere Respect

P.S. Mr. Cambrelleng or Mr. Lawrence can I presume, if necessary, inform you what credence my statements are entitled to. 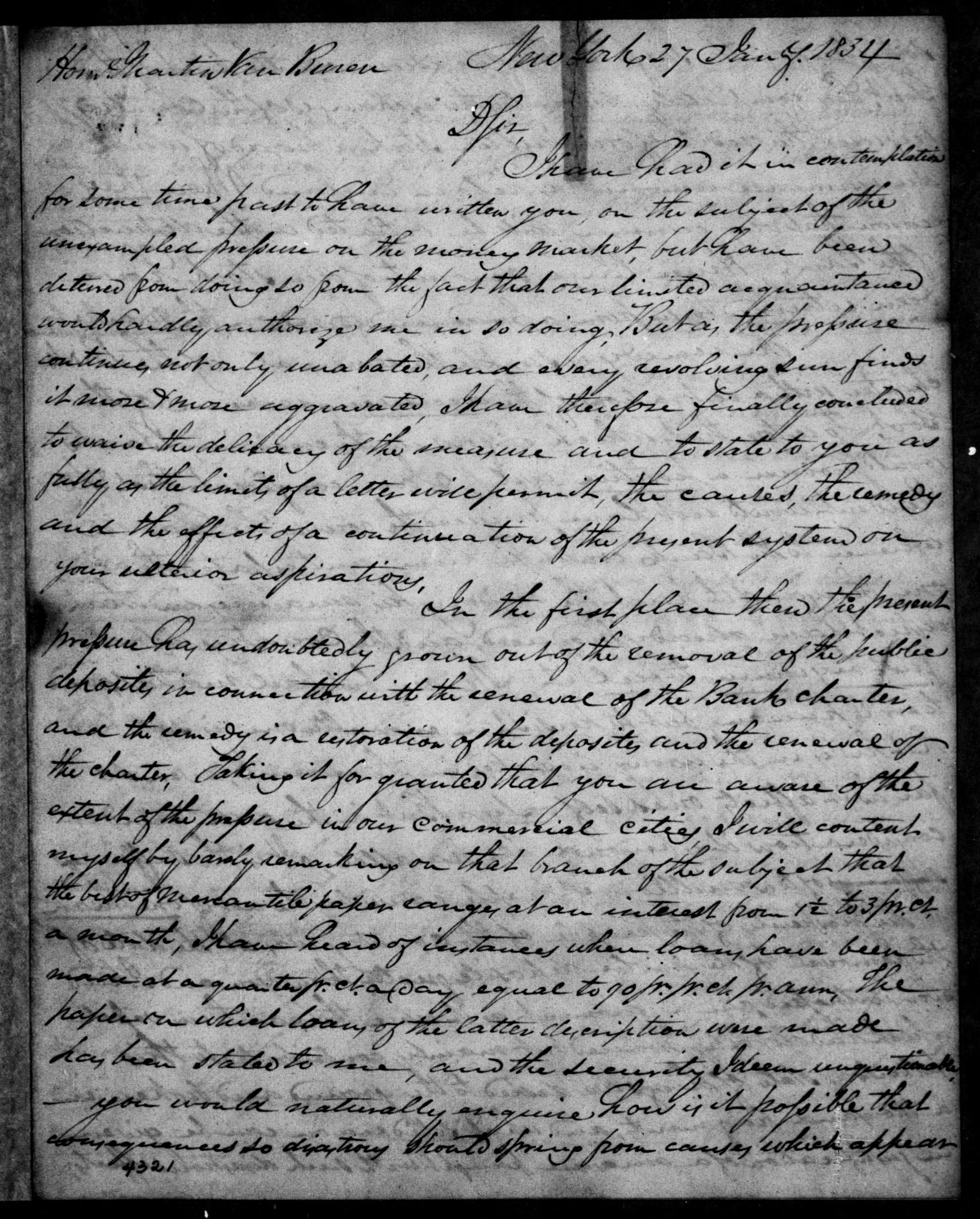 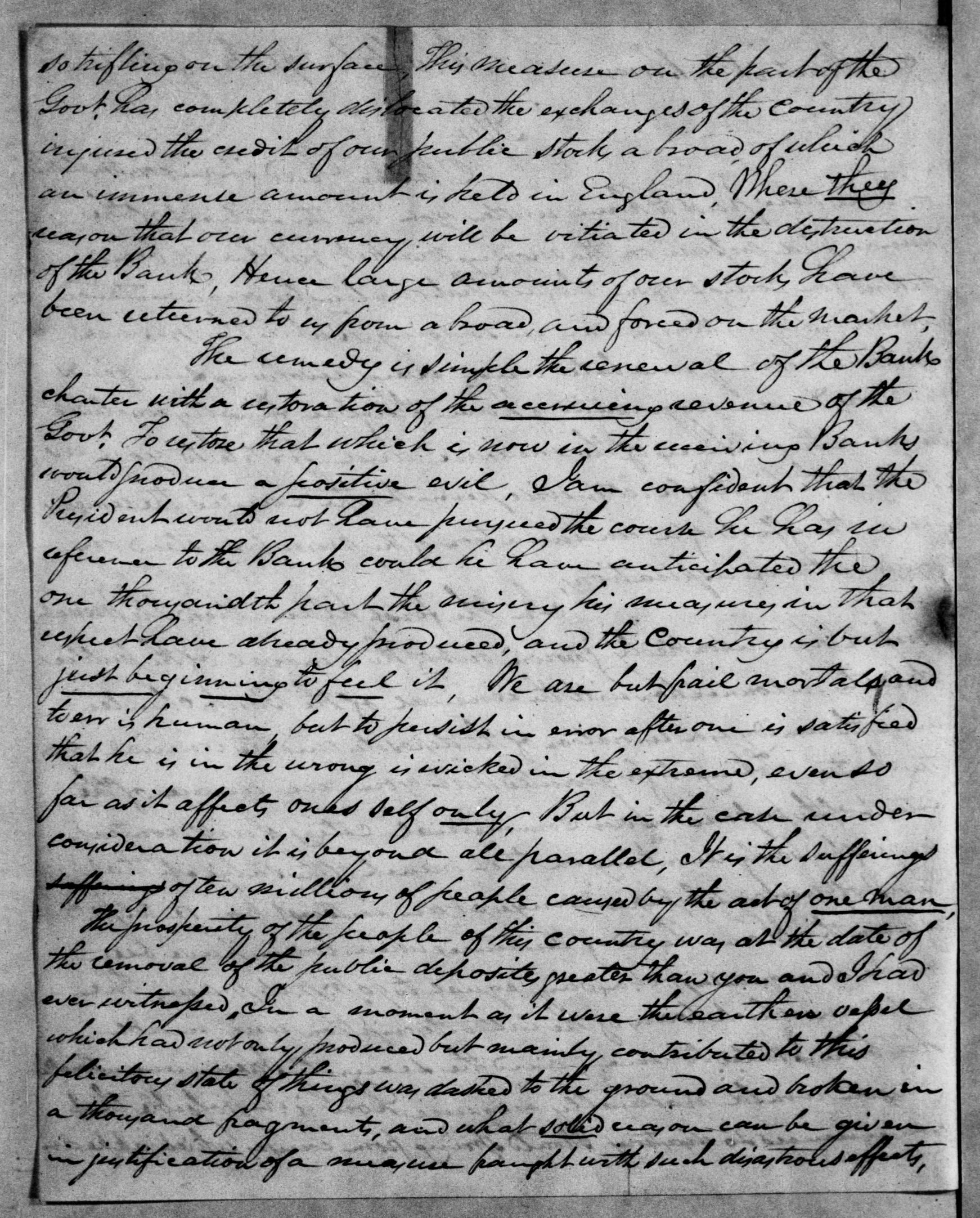 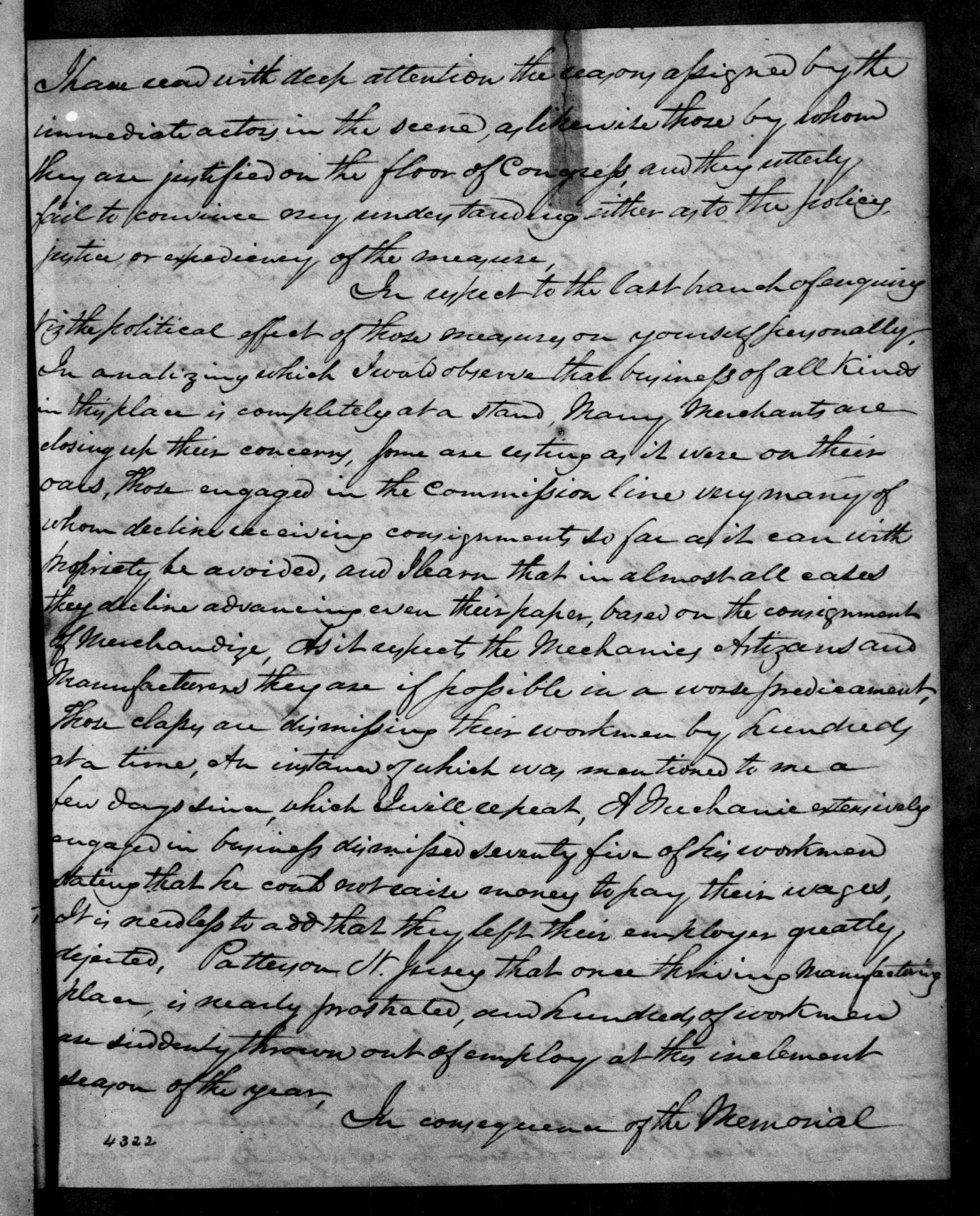 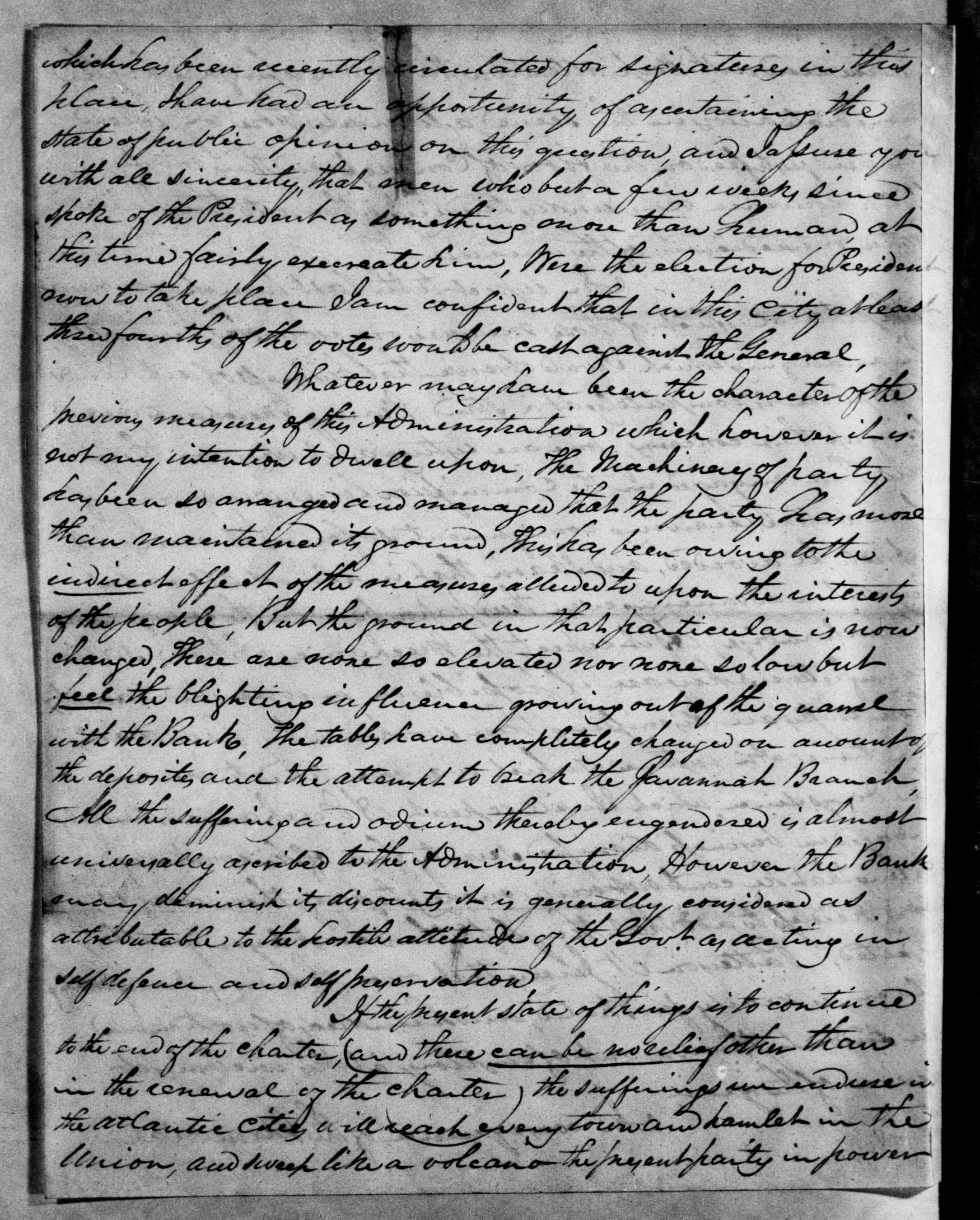 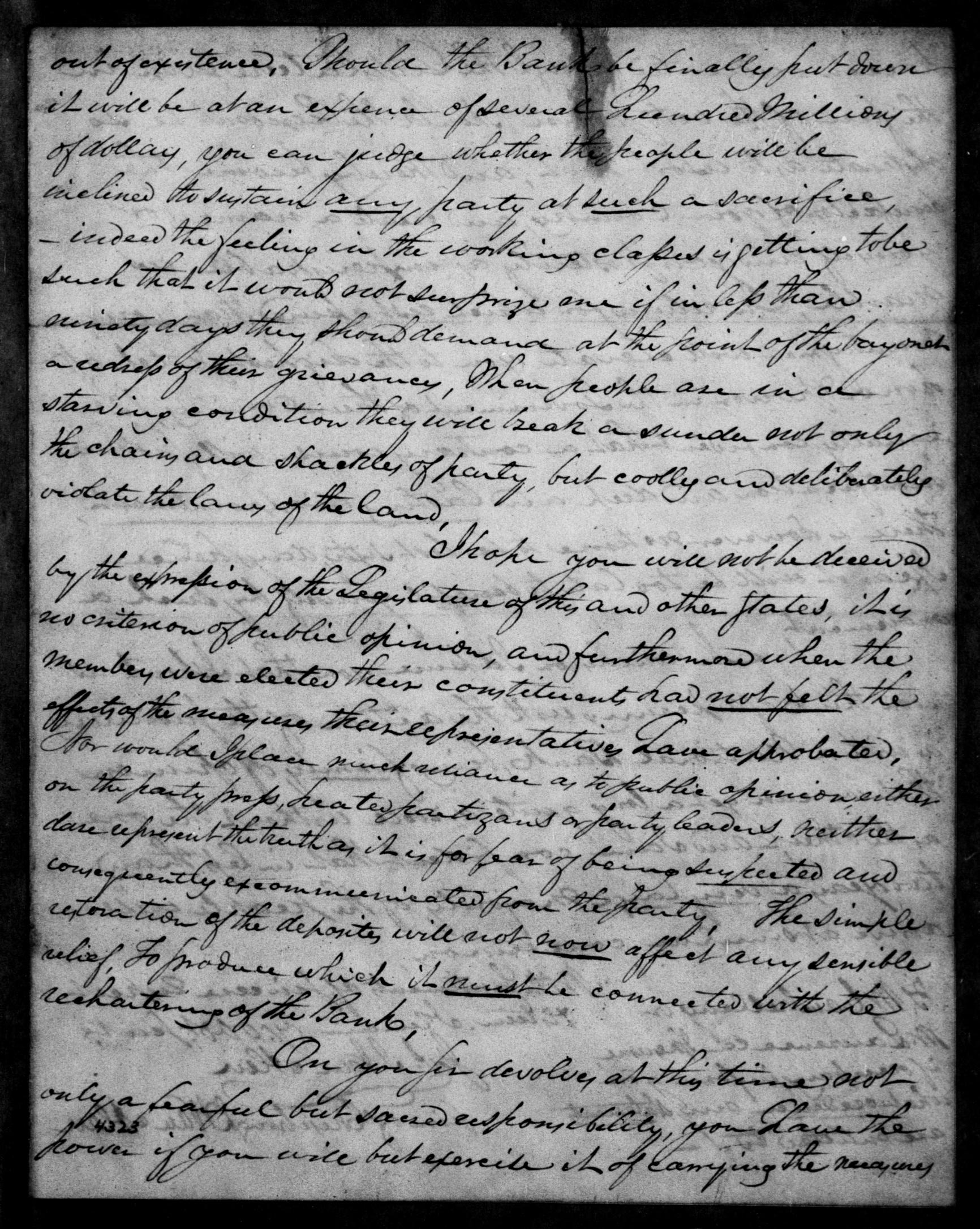 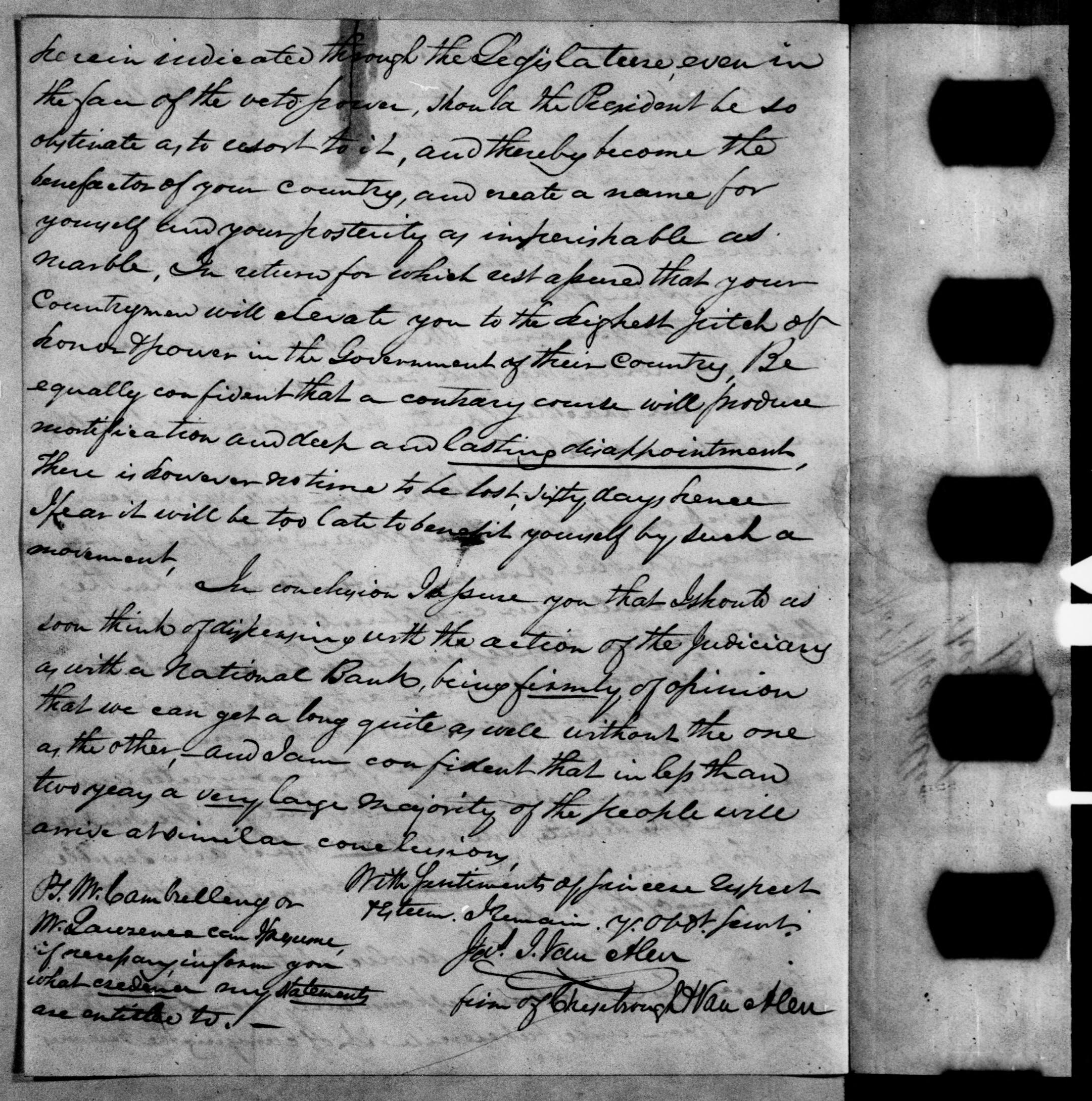 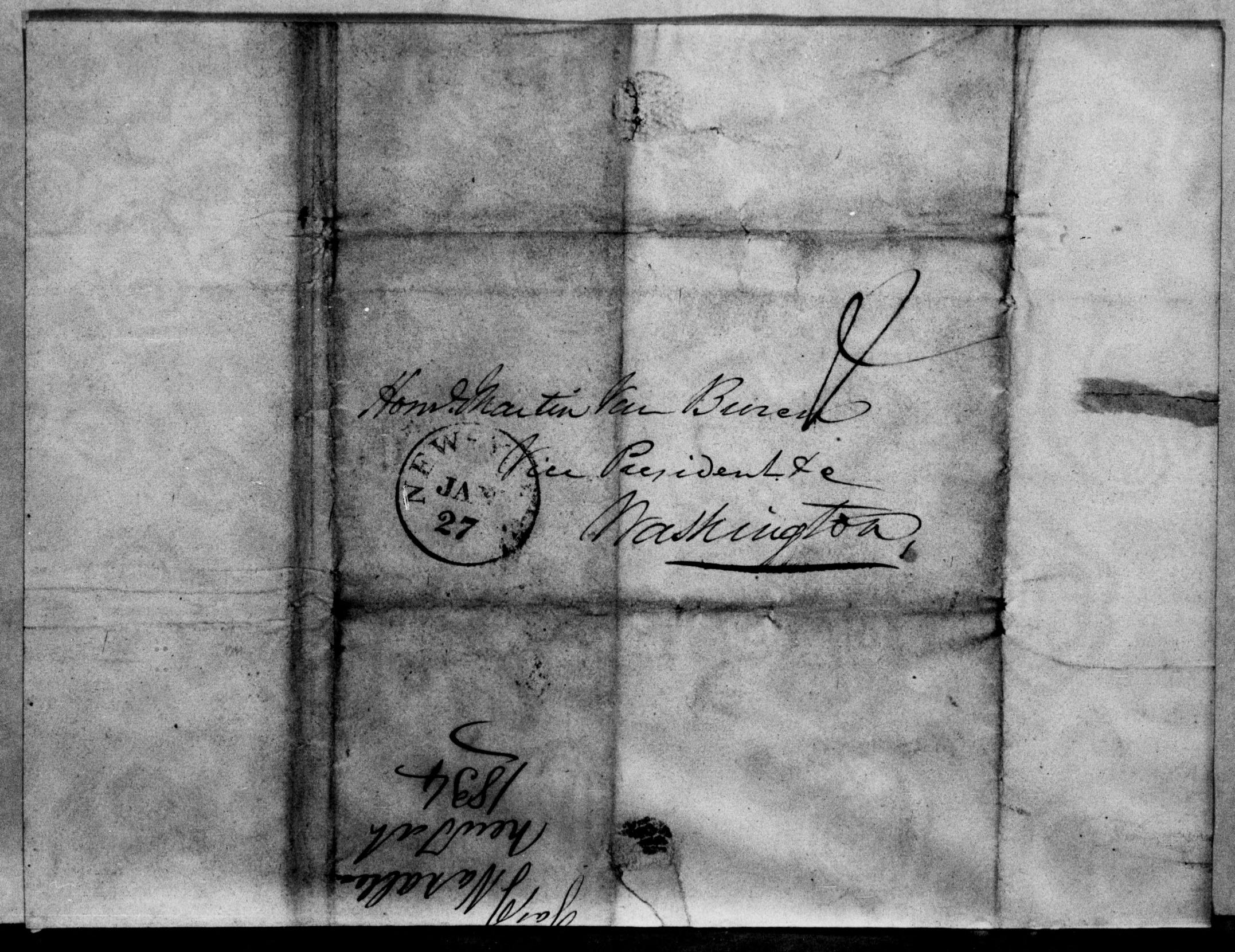