I am informed by my Daughter, who saw you at Mrs. Otis’s, that you did me the honor to enquire for me. I expected to have that of meeting you there, or that of seeing you at your lodgings; but I was deprived of both by indisposition.

I am no Politician, Sir, in the usual acceptation of the word; yet I wished to exchange a few words with you on such subjects. I am a Republican, made so first by paternal deeds, cultivated by four years residance in Spain, and fifteen in revolutionary France: two very opposite schools you will say, but very similar in their results on an honest mind. I belong therefore to the republican party here. I belong moreover to the Free trade party; which is a legitimate child of Democracy.

The strength of the former party you are aware of, for you know the character of Man, in its untrammelled state, and can make all proper allowance for his rights being occasionally being thrown into the shade. You know moreover the spirit of the age, which will admit of no retrograde movement.

The latter, the Free trade party, evinced its strength two years ago, in its attempt to send Mr Lee to Congress. I need not tell you, that our principles have gained much since that time; although we have not seen fit to try our strength again. Sir, our party is very unlike most other parties; our greatest difficulty is to procure Candidates who will take office; even in our City Government, where the foundation of party is usually laid. But we have numbers, talents, wealth, and courage in our party. The strong stimulous of interest seems to be wanting; but I can assure you Sir, that if trouble had come from the agitation of last winter, the men of our party would have been heard from, seen, and felt. We were preparing silently the means of combatting interested error with the sacred arms of truth: and some of us were scattered over the Country, watching the workings of opinions; and throwing out occasionally Essays suited to times and places. I took my station at Baltimore, where I wrote habitually in the Baltimore Republican: but sometimes in Washington, Philadelphia and other places; and in every paper, where poor persecuted truth could be smuggled in, under any disguise. Such compositions, of course, could not pretend to much method, or elegance of form. It is thought however that our effort were not without some effect. My brother Otis accuses us of having furnished all the political amunition for the southern Combattants.

You are aware Sir, that there is in New England, much good sense, and native Republicanism. The one has been misled by apparent interest; and the other eclipsed by false doctrines: but there are in the Free trade party many able writers, who would be happy to employ their pens in a just cause; and in such a cause, they cannot doubt that readers and actors would be found all over New England.

In fact, an evident change is now operating among the Farmers & Mechanics; and especially among the operatives, of the Factories, and small Manufacturers, in whose name the American system has been established; they have discovered that the benefit goes to the Capitalist, and not to them. This party (if I may so call it) is of opinion, that no system, which is not founded on the everlasting basis of truth and equity can control these States. Specious systems, got up and supported by money perverted talents, and machiavelian sophistry, may have an ephemeral existence; but the people of this Country are to enlightened to adhere long to error, when that error may be shown to be prejudicial to their interests; and when a numerous body of men, are able and determined, as we are, to expose these errors. We fear not great names; for the commonest among us, even now, dare to ask of the Idolators of a Webster; what he can do? what he has done? and if he be so great; to show us his dimentions, that we too may fall down and worship him, but knowingly.

No Sir, the age in which we live required the rationale of everything; we must see and understand, to believe.

The works of Jackson, we can put our finger upon, and the commonest understanding can appreciate them; hence his election. And the republican principles of some others, we know, and we also know that their future prospects hang on those principles. Men who are this thing today; and that tomorrow, without the most imperious reasons, will not wear well in this Republic; and will leave no name to posterity.

Moreover, to be frank Sir, we understand, and <truly> appreciate the natural influence which your State is destined to have in the future counsils of this nation. We think we understand the true policy of that State. We know that its best policy will be found in National Equity. If New York is to have durable influence, it must be exercised in supporting the major interests (well understood) of the other states. We cannot suppose that speculative, and local interests, can mislead States, as it has done Individuals. The best system imaginable if its good effect be confined to narrow limits, must look for support to these limits only, and no policy can be long popular in this Country, which is partial in its operation: and all such futile attempts to perform impossibilities, will eventually bring the <Projectors>, their supporters, and the Country into contempt.

Sir, an old man like our unfortunate Mr Adams, may soon die, and thus escape the contumely which must attach to all the abettors of a Deceptive Policy. It might have been expedient for the first Legislators who undertook to civilize the Hellots of Greece, to use deception, and pious frauds; but not so in our time; and younger men than Mr Adams who have time to enjoy the shade of their own Plantations, would do well to study the workings of the human mind in Germany, France, and latterly in England; and then consent to follow, the current of time; which no man, or body of men did ever yet successfully resist: especially, since that current <setts> now strong in the right channel.

But Sir, I must take up no more of your precious time, at present; but if I should have the happiness to meet your views, and that of meeting your person again, it would gratify me much to continue this subject. In the meantime permit me to assure you, that the party which I have the honor to belong, would be happy to cooperate with you, and your state, in all measures tending to the preservation of this union, and which they think are only to be found in an honest policy. We want for ourselves neither places nor pensions; but we wish to preserve the fruits of our honest industry, by preserving the peace of the nation, on which they depend. 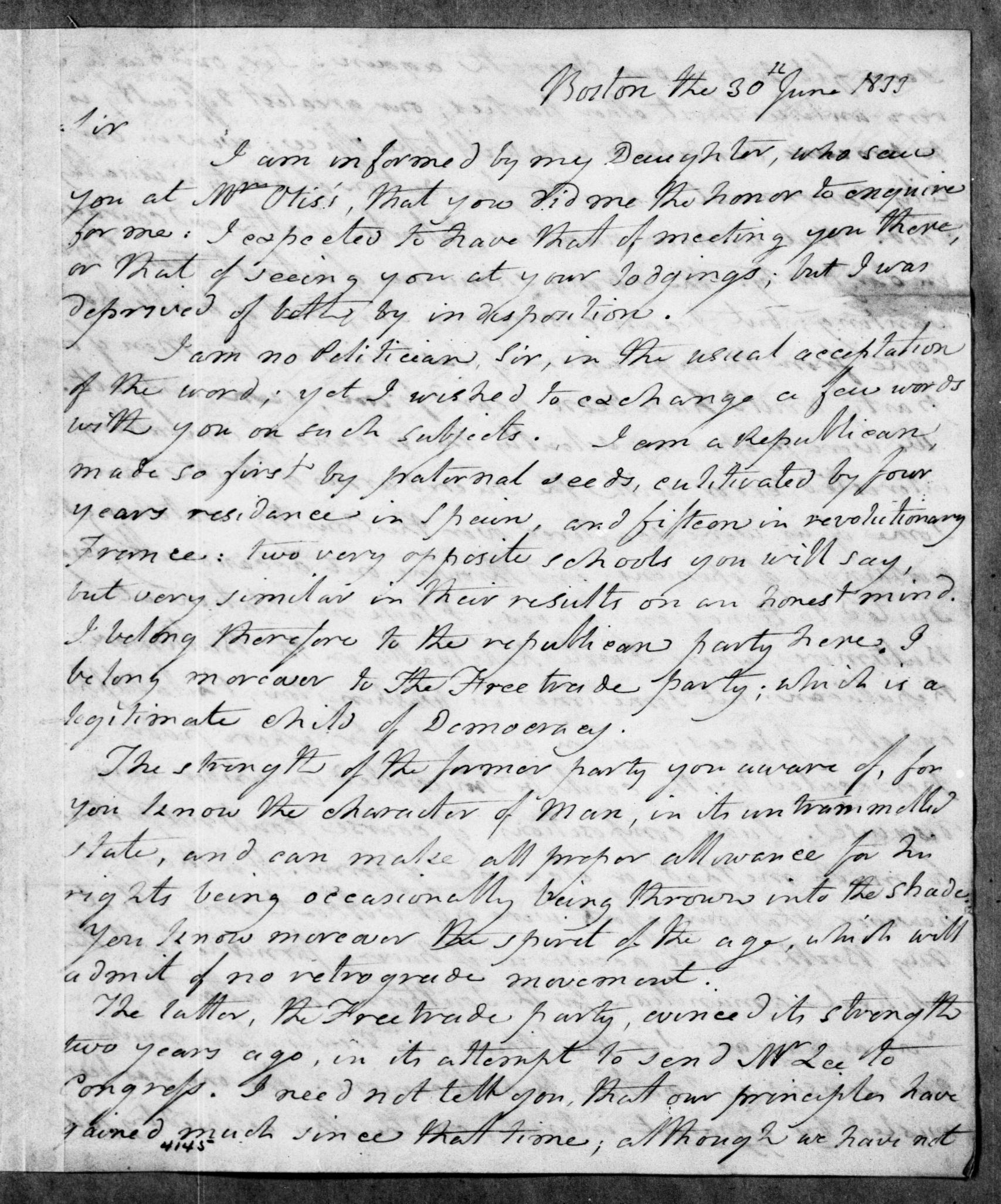 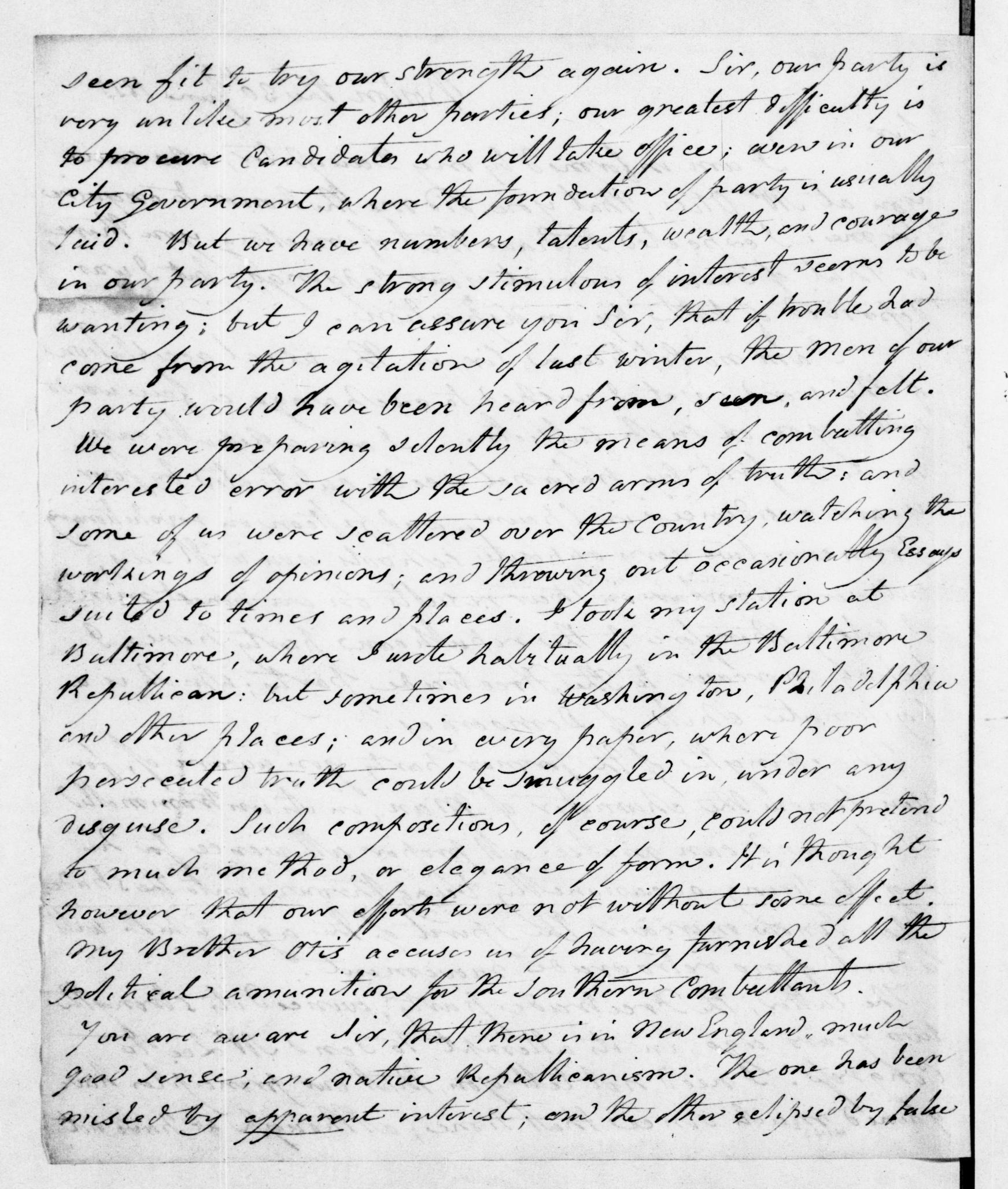 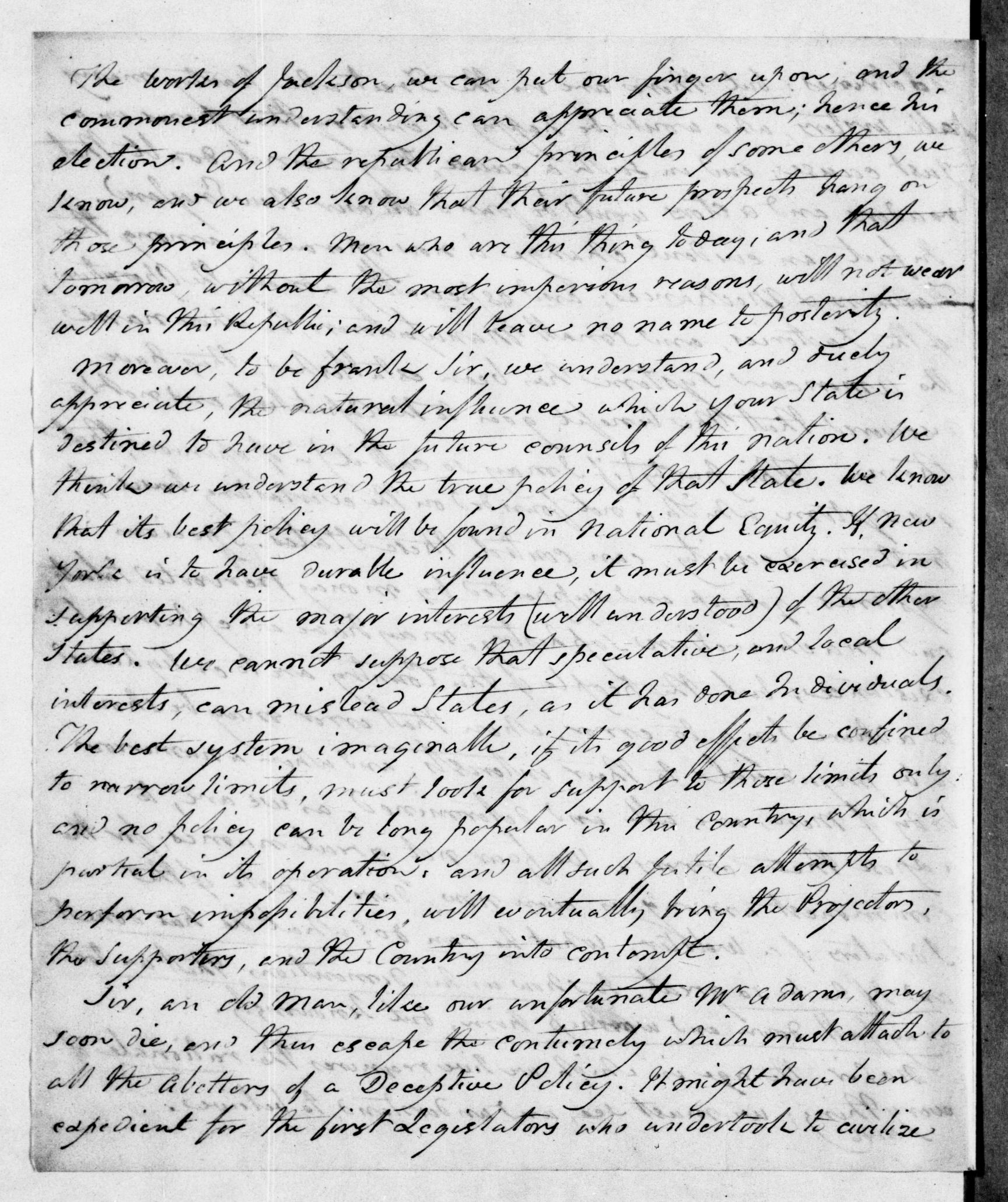 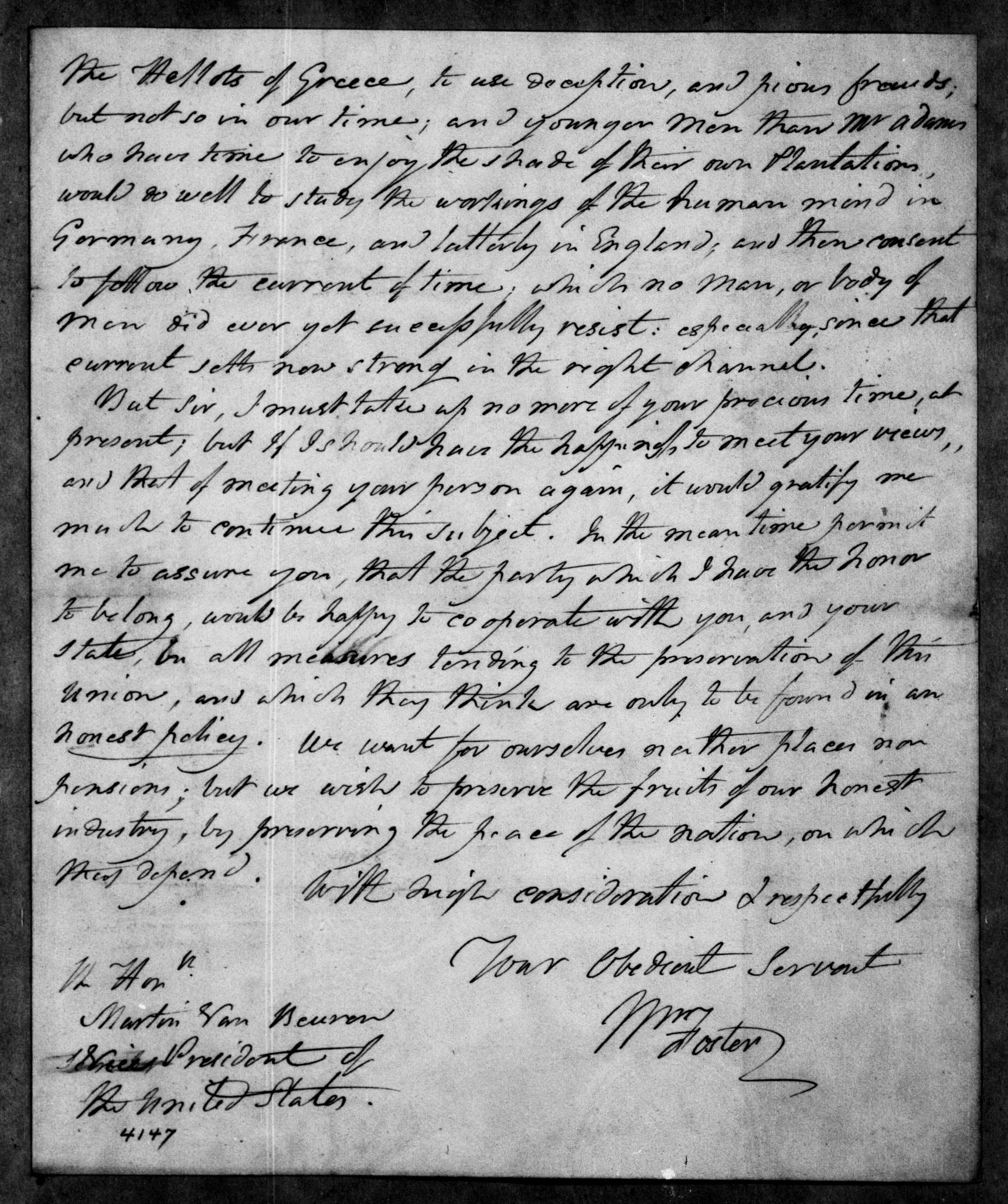 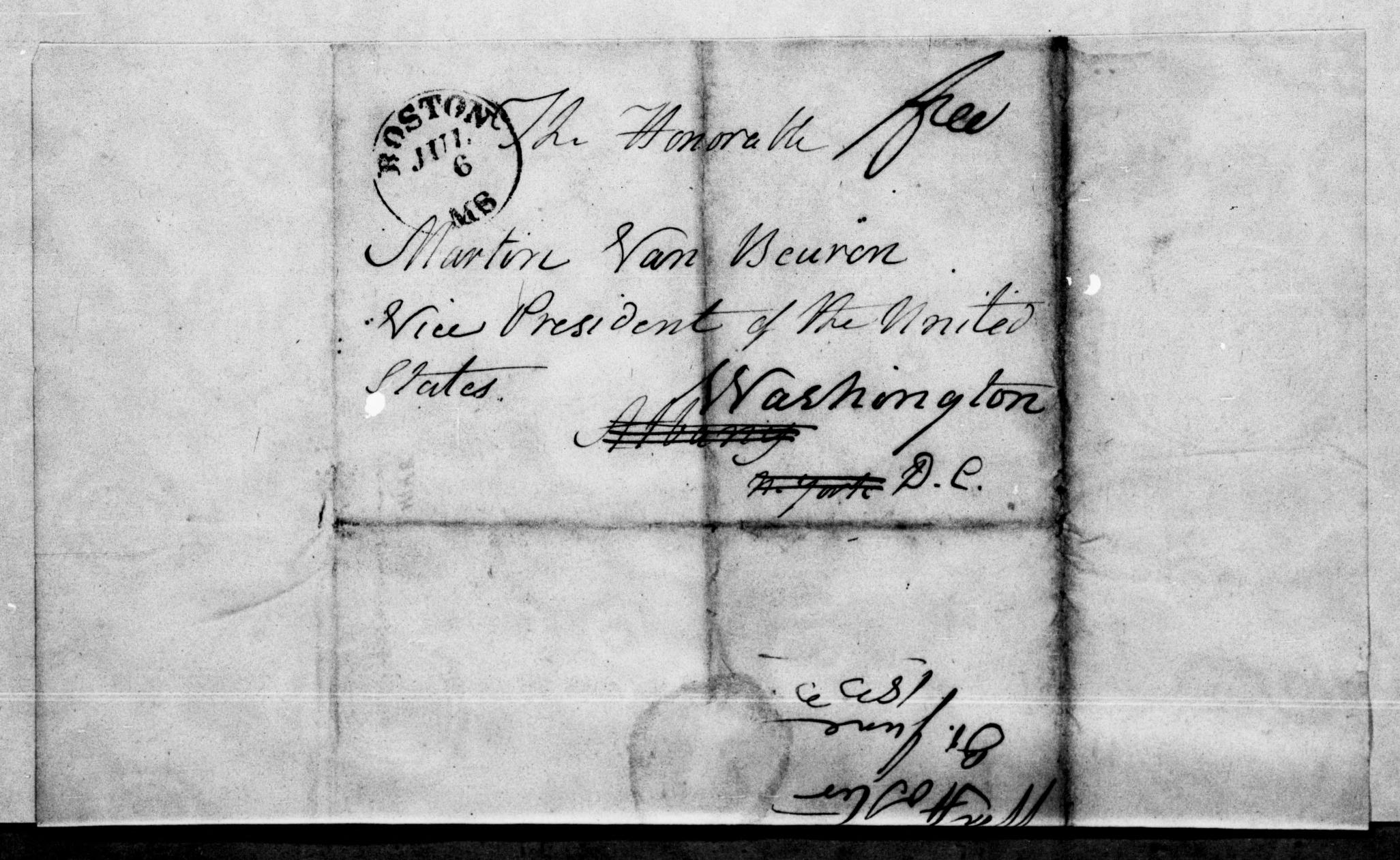