The President left here this morning at six o’clock for Philadelphia. His health is quite as good as it has been at any time since the adjournment of Congress.

The President seems to have made up his mind that the public deposits must be withdrawn from the Bank of the United States. As to the manner and time he is not so well satisfied, and on those points, and perhaps upon the expediency of the whole measure, he will consult you. I have therefore thought it would not be impertinent in me to call your attention beforehand to those points in this subject on which his mind is not settled and on which particularly he will desire your opinion.

I shall take it for granted that the deposits will be removed. The question then arises in what manner and to what Banks? Premising that the government must not be placed in a worse condition under a new arrangement than it is now, I submit for your consideration the outline of a plan which may combine safety to the deposits and convenience to the Treasury, under the new order of things.

Let one Bank be selected in Boston, two in New York, one in Philadelphia and one in Baltimore with a reservation of a right ^on the part of^ to the government to add one in Norfolk, one in Charleston, one in Savannah, one in Mobile and one in New Orleans upon their acceding to the terms proposed, which shall receive the deposits in those places respectively, and be responsible to the government for the whole public deposit of the United States.

Let these Banks, by a convention of their Presidents or otherwise, select all the Banks at other points throughout the United States in which the public money shall be deposited, with an absolute negative upon their selection by the Secretary of the Treasury.

Power must be reserved to the Secretary of the Treasury to discontinue the deposit in any Bank or break up the whole arrangement whenever he may think proper.

The arrangement of the government will be only with the primary banks which it will hold responsible not only for the safety of the entire deposits wherever made, but for making payment at any place in the United States, without charge to the government, in gold and silver or its equivalent, of any sum which may be required ^there^ to be paid by the Secretary of the Treasury.

They must also pay any expence which may attend the removal of the deposit, as also the compensation and expences of any agent, temporary or permanent, which the Secretary may appoint to examine into their affairs or superintend their operations.

They must also render or cause to be rendered every service to the government without charging, which can now be lawfully required of the Bank of the United States.

This is an outline of the safest and best plan which has suggested itself to me.

As to the manner of changing the deposits, I think it should be done in the gentlest manner. The funds in the Bank of the United States may be suffered to remain until drawn out by Treasury <Warrants> for the <illegible> expences of the government, while all the collectors shall be directed to place their new deposits in the selected state banks. This has the double recommendation of <illegible> ^shielding^ the government from every charge of harshness towards the U.S. Bank and enabling the selected state banks to <illegible> ^make^ terms with their rivals and neighbors before they may be called on for payment by the Treasury. There is not a doubt in my mind, that they would in one month be able to arrange with the U.S. Bank to cash all their branch notes in Philadelphia or New York, or in less than three months compel half a dozen of their interior branches to stop payment. The whole circulation of the Bank of the United States passes through the Custom House more than once a year, and if it be thrown back for payment when received by the ^selected^ state banks, it will under any circumstances reduce the U.S. Bank to great straits. My apprehension is, that the great mammoth and not the state banks may be compelled to stop payment. But such a catastrophe is not perhaps desirable, and by the forbearance of the government and state banks it may be avoided.

As to the time of this movement, I am firmly of the opinion, that it ought to be made soon enough to take the last dollar out the U.S. Bank and present the new machine in complete operation before the next session of Congress. This cannot be done unless the deposits in the state banks commence as early as the first of August or at furthest the first of September. To make every thing <sure>, I am in favor of the first named day. Hitherto the Bank of the United States has on this subject been on the defensive. By completing the transfer before the next session, the government will have the advantage of that attitude. [. . .] by the increased power of the state banks and the weight of the President’s popularity. When the U.S. Bank, stripped of much of its power to do mischief, shall be struggling almost for existence, those who are ^now^ restrained by ^fear of its vengeance^ its power will proclaim their opposition and it will be deserted by most of its mercenary friends.

I pray you to consider these points, and if you concur with me, I hope your great influence may be exerted in every proper mode, to effect the desired object.

With very great regard 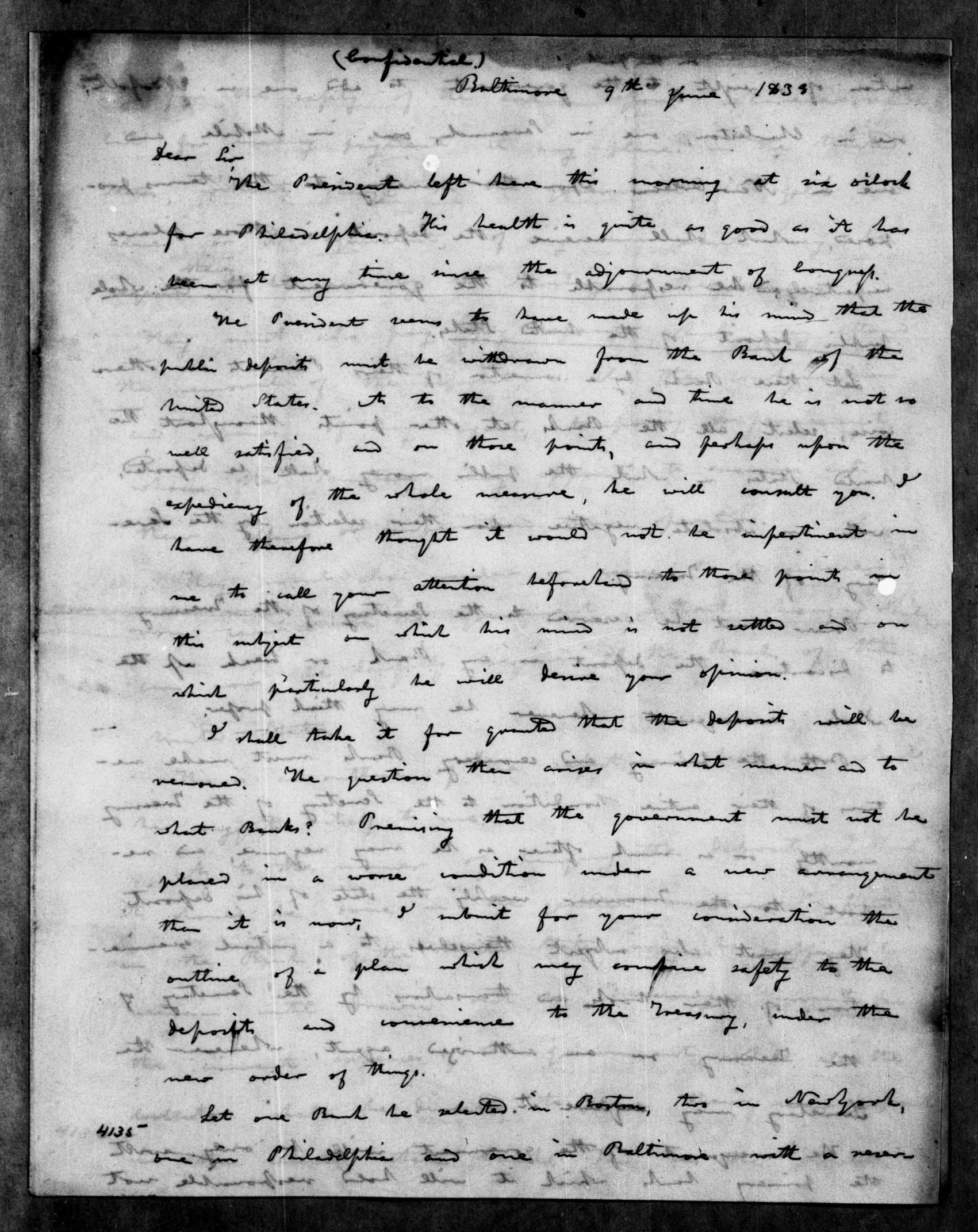 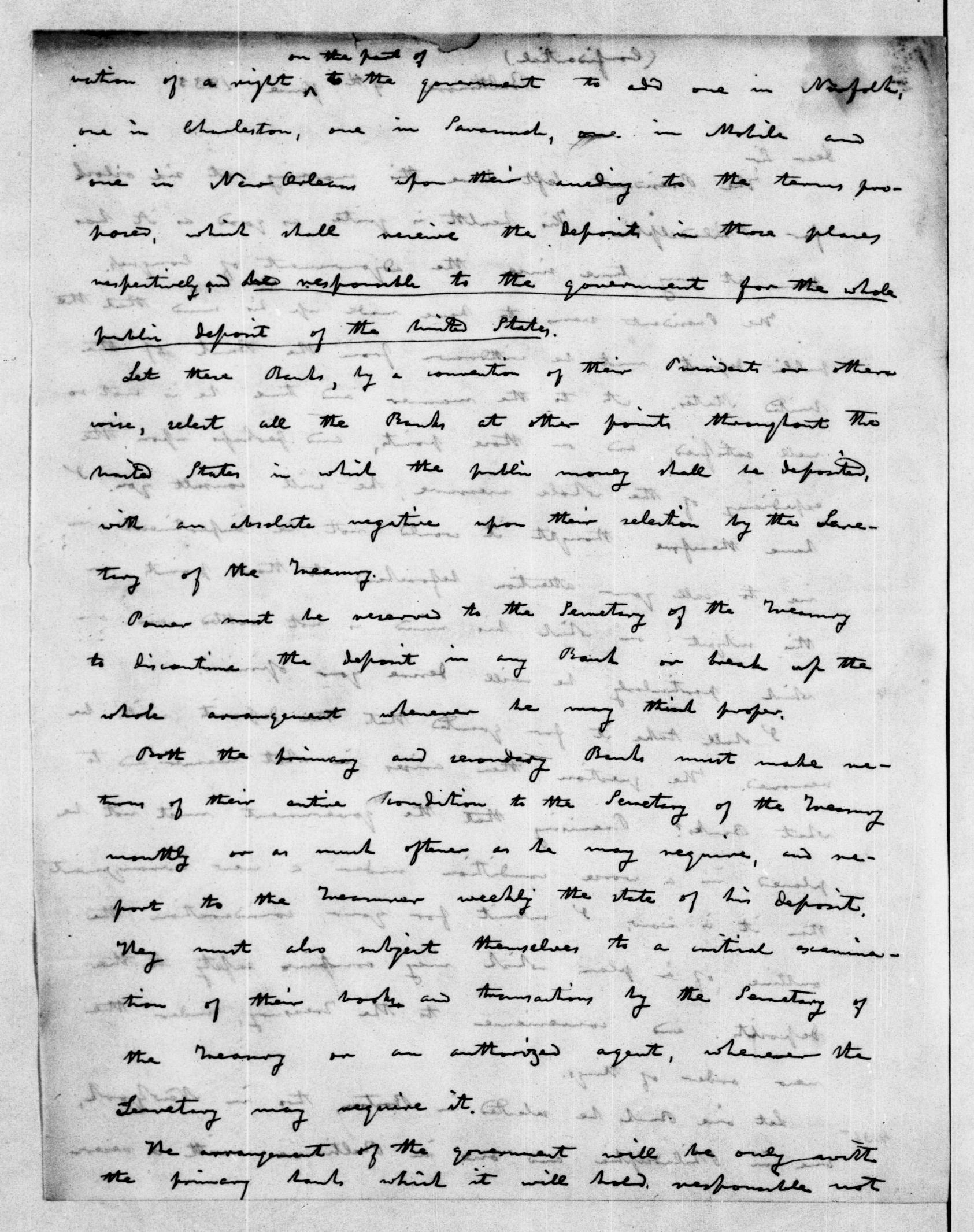 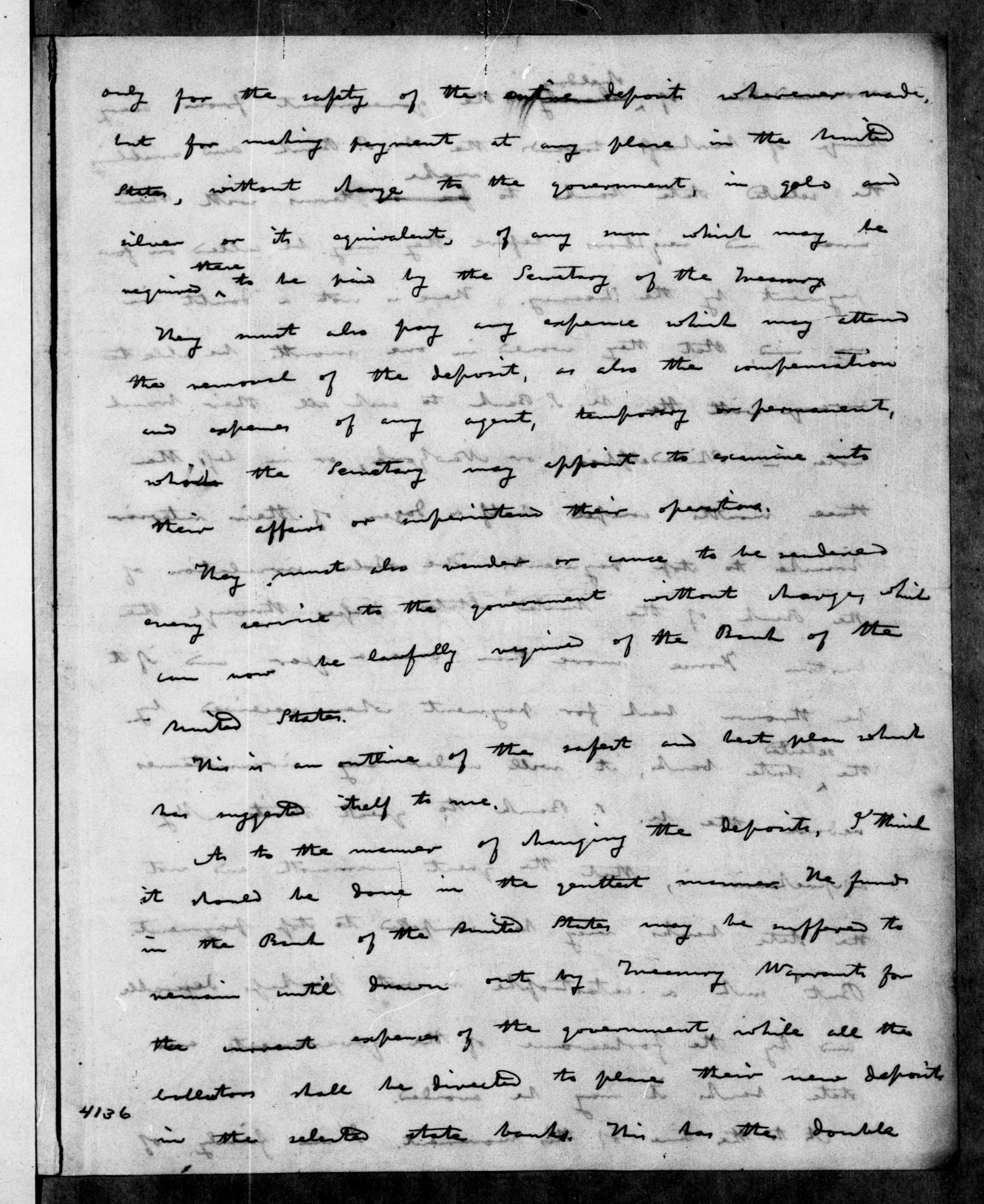 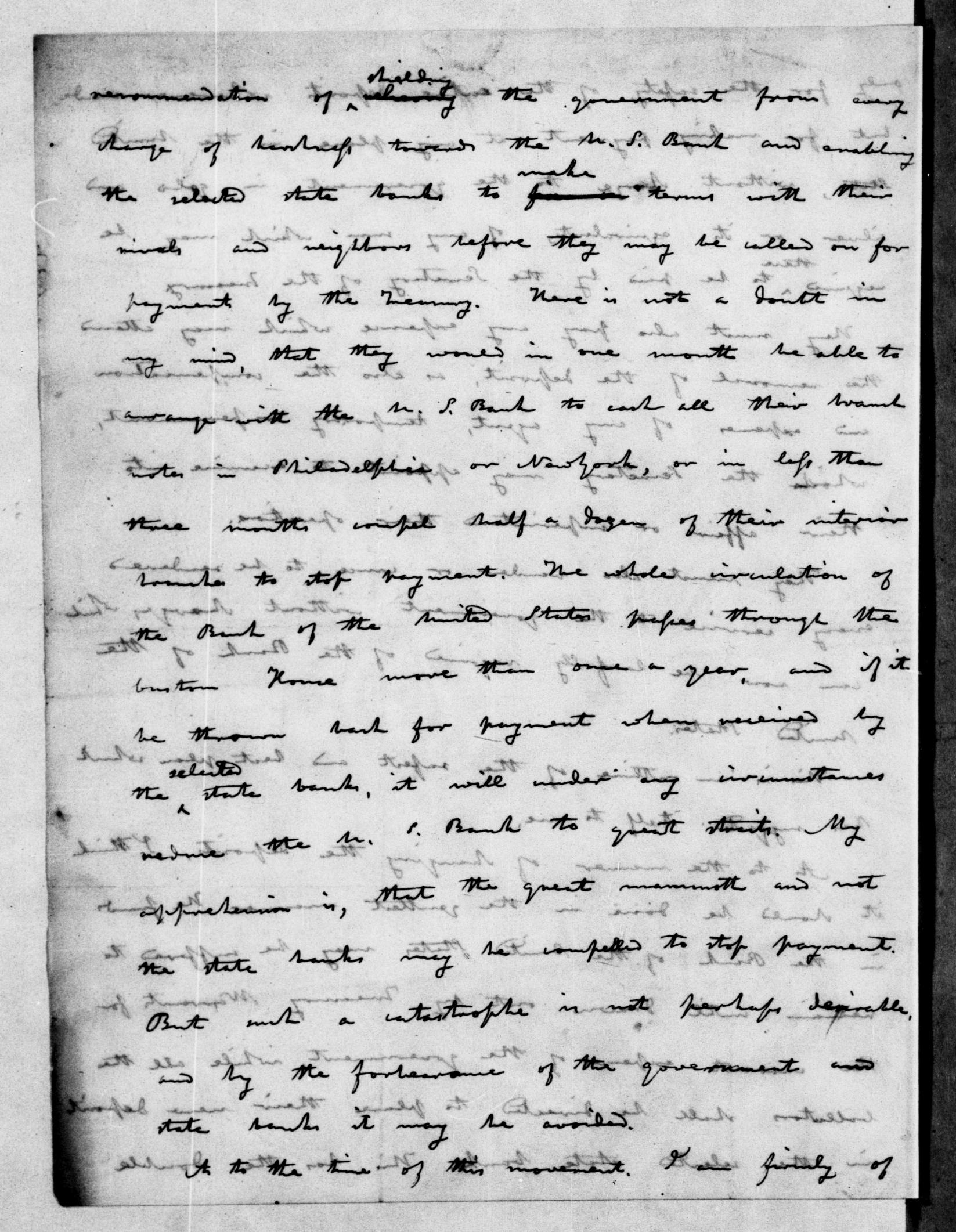 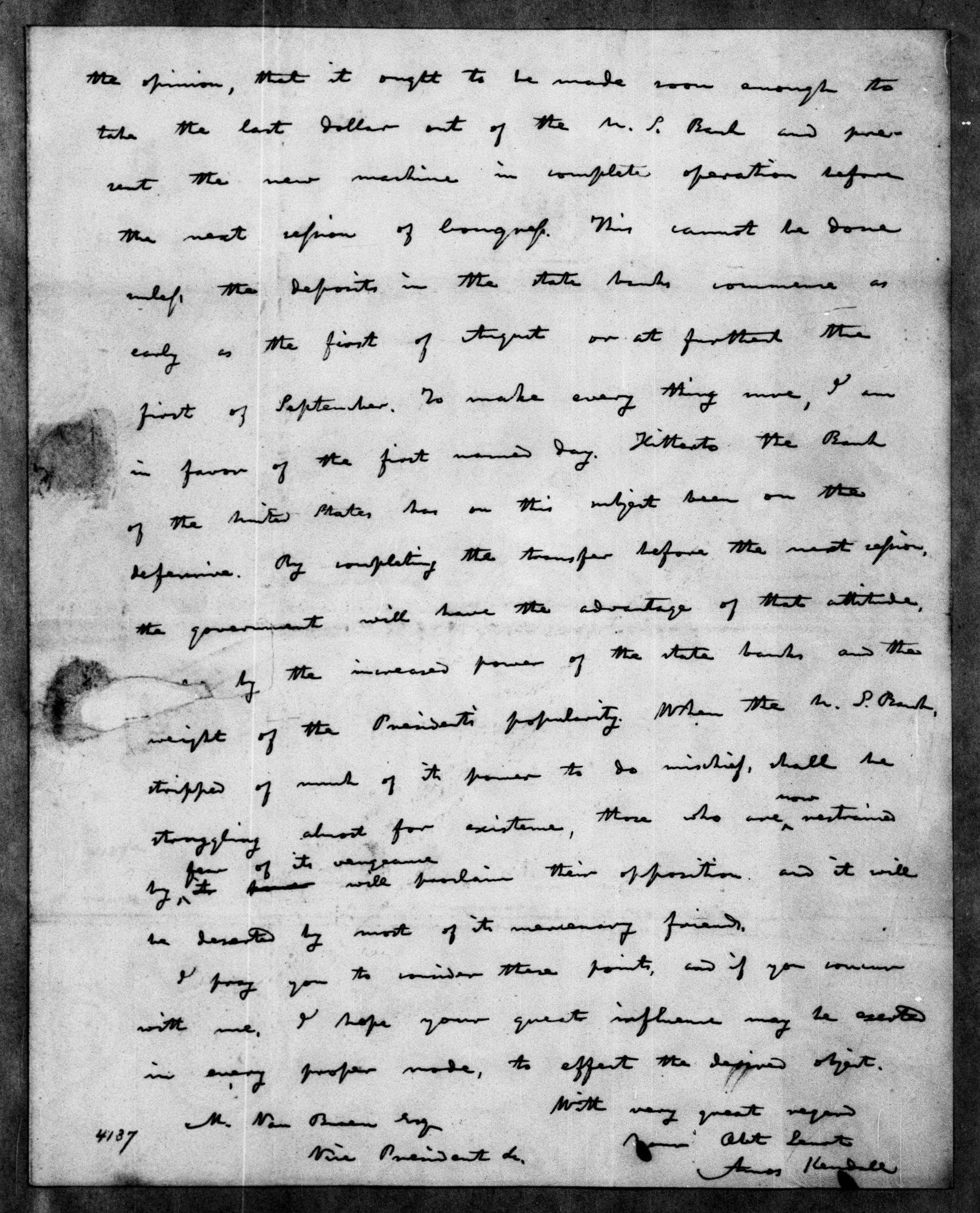 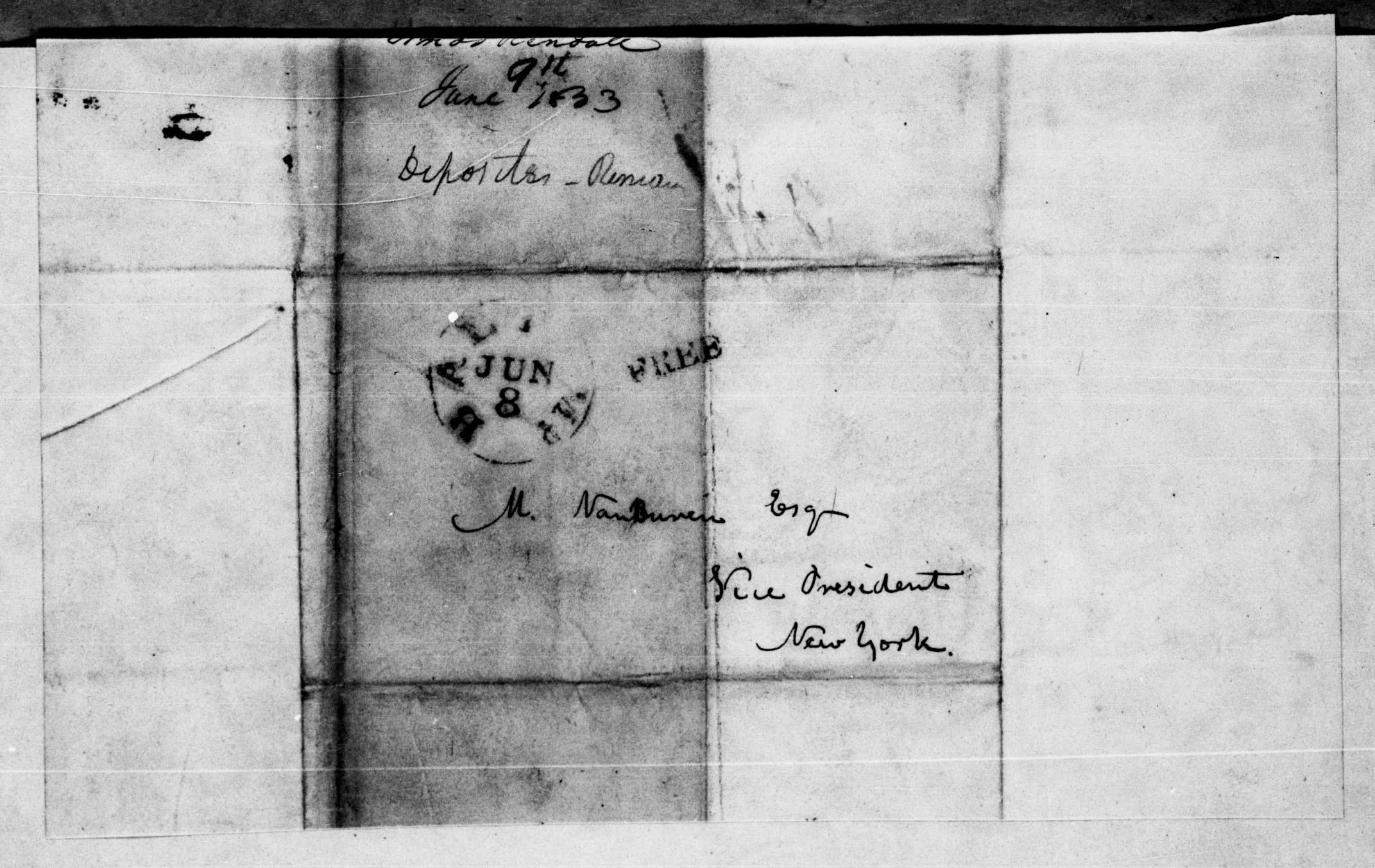 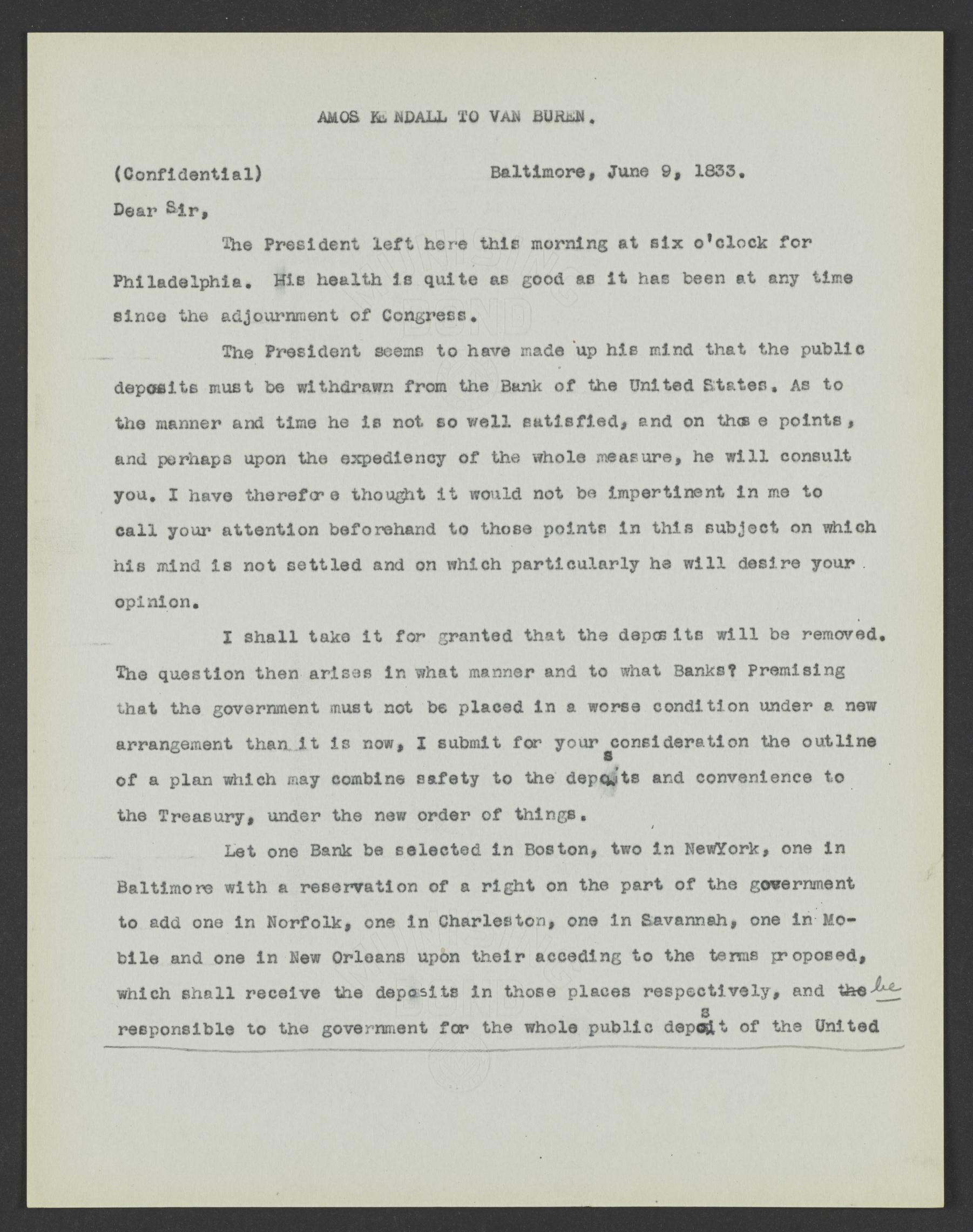 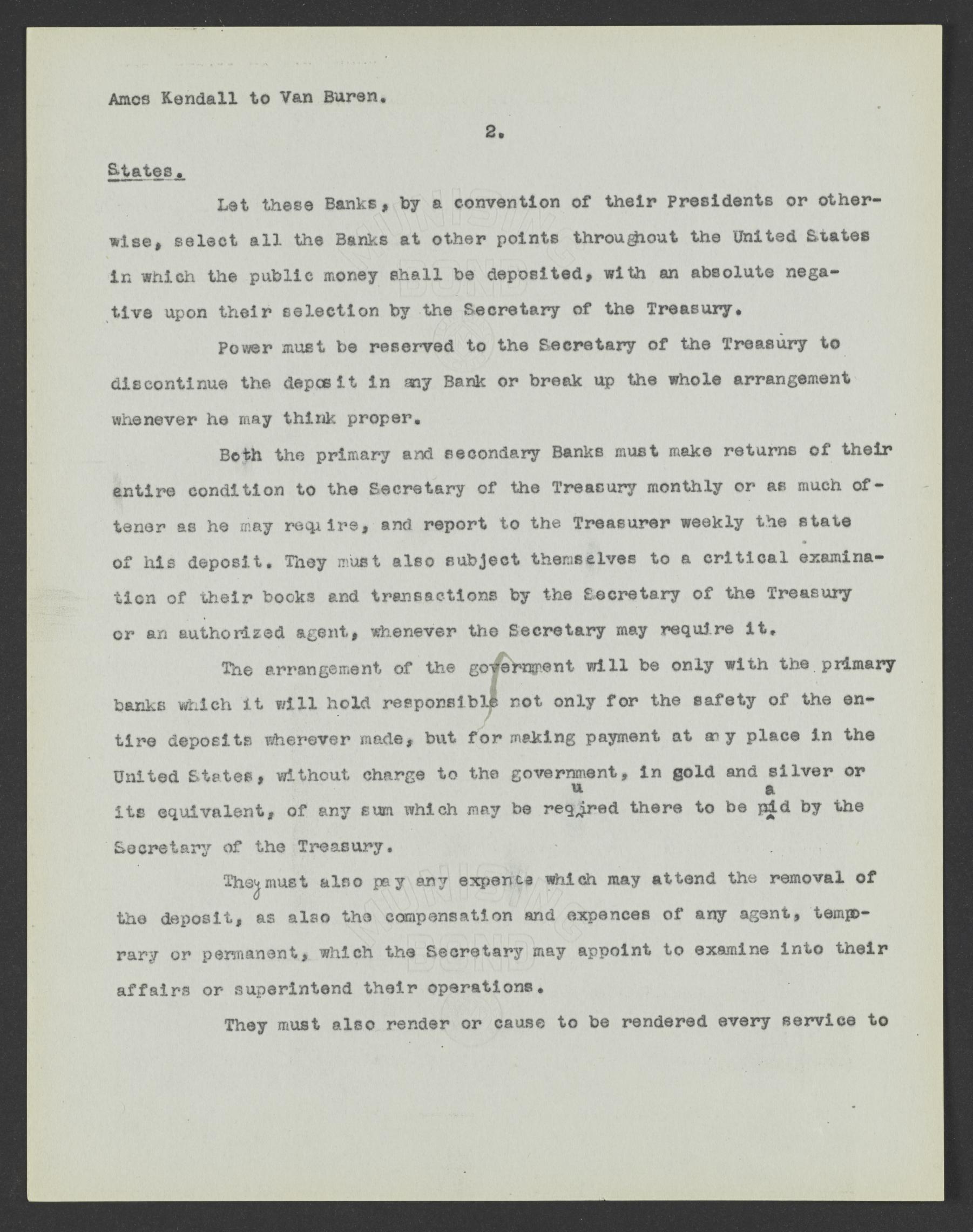 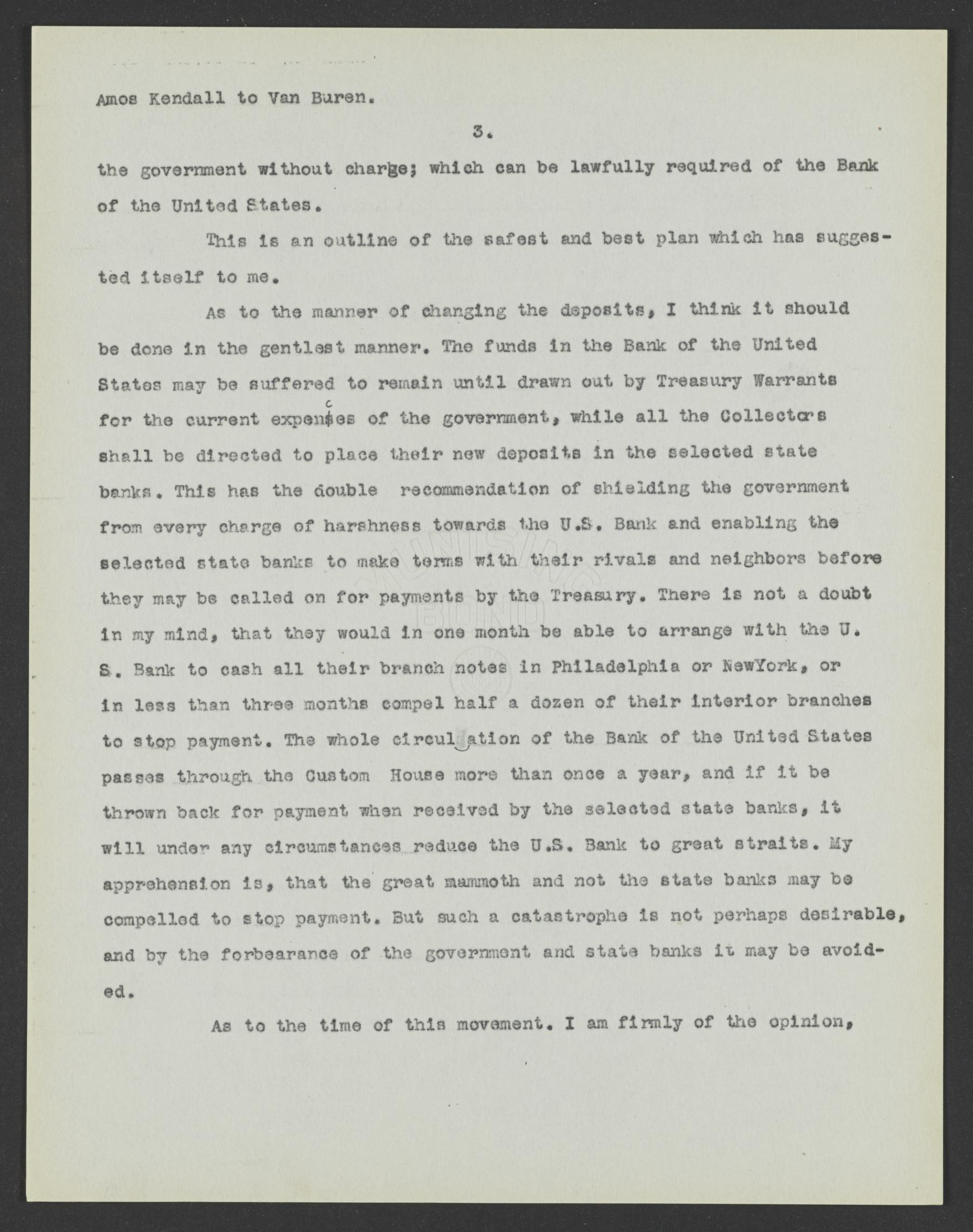 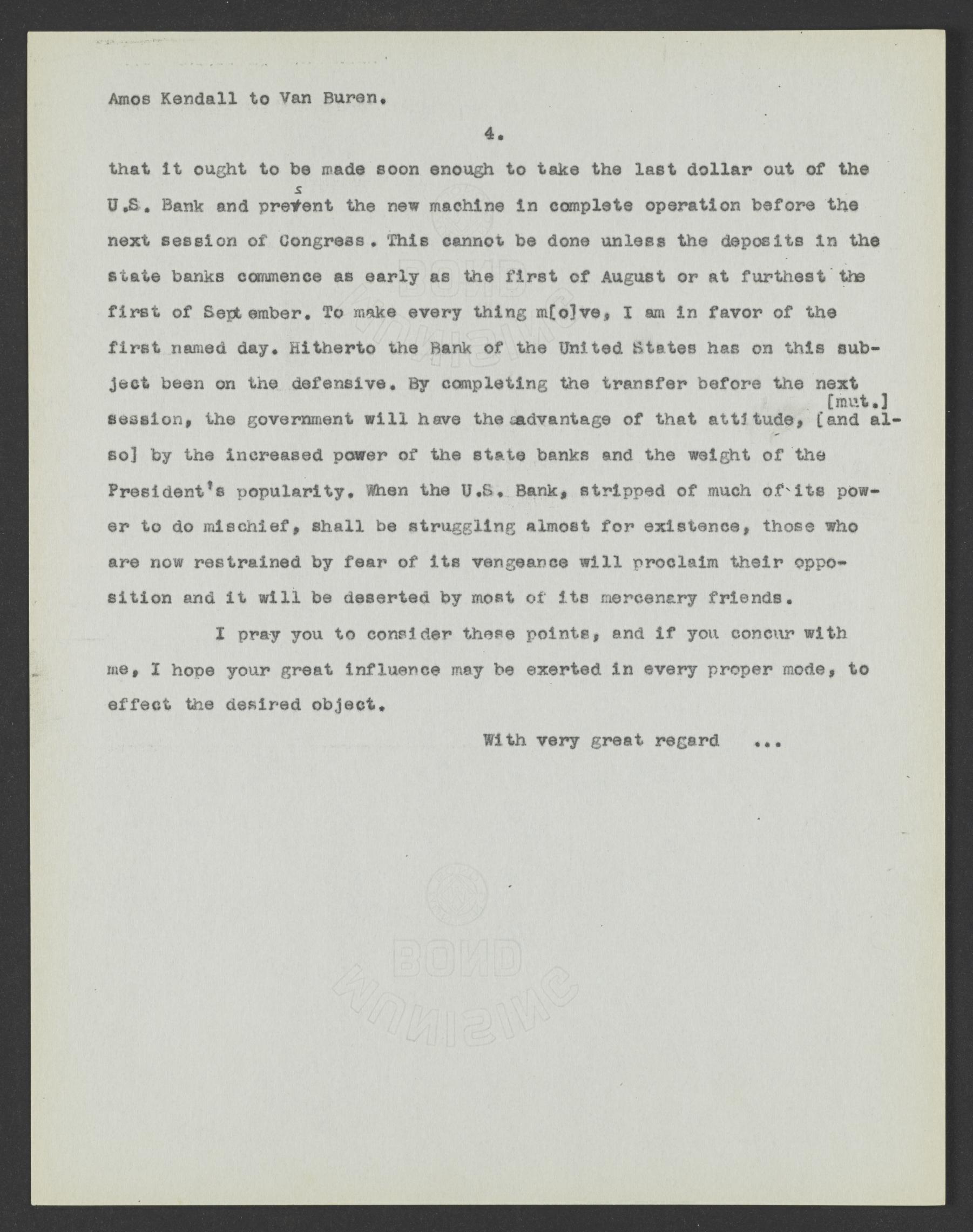