You will see by the Intelligence of to day a resolution relative to convictions under the Sedition law with some brief remarks from Major Hamilton. This subject was originally brought before Congress on the petition of Judge Cooper of South Carolina & ^of which^ I send you a copy together with a report made in the Senate.

It appears to me that this is well calculated for our meridian & it would give you a fine opportunity to say some civil things about Major Hamilton who is one of the best men in the nation & of Judge Cooper also. It is gratifying to meet the Republicans of the South upon the old platform which was laid by Jefferson & supported by Madison. There they may always expect to find union & co-operation from the Democrats of the north. It has been because the old cause has been for a moment lost sight of in some portion of the Southern country that a temporary estrangement ^has been^ <witnessed> between those who in 1800 rescued the power of the government from &c. & it is to that estrangement that we are indebted for the success of the amalgamation party which now &c.

Judge Cooper is now President of the College of South Carolina is the author of the some of the ablest works that have issued from the American Press. He is a man ^of the first talents in the union^ of ^the^ most amiable character & integrity altogether unimpeached. It is would be quite interesting & instructive too to republish the article for which this great apostle of liberty was for six moments confined as a criminal and compelled to pay &c. It would furnish ground for profitable reflection. Taken ^in connexion with^ Mr Clays removal of the Republican printer the threats to the Custom house officer in New York through the National Journal the Lecture read to Messrs Gales & Seaton by Mr Adams & the denunciation of the <illegible> foreigners after the late election in New york &c &c & how long would it have been before the American people would have witnessed a second reign of terror but for the seasonable & efficient interposition of the people. Whether the redress proposed ought to be given is an other and a grave question. I shall vote for it If an opportunity is presented. That the alien & sedition laws if not the crimes were certainly the follies of the administration in which they were passed is now admitted by ninety nine hundredth of the intellige[. . .] of the Country. That no administration will ever again dare to brave public opinion in that form is certain. The great objection to the redress asked for is that it belongs to the Judiciary to pass upon the constitutionality of all acts of Congress & that this would be a encroachment by the Legislature upon the Executive ^Judicial^ power of the Legislature <illegible> & So far as it respects individual rights this may be regarded as a correct exposition of the constitution. What the rule would be where a State complains of a palpable violation of the compact by a majority of her sister States in Federal council assembled is a different question. If therefore Congress had stepped in before the ^time for^ imprisonment had expired ^& discharged the prisoner^ the objection now taken would have been in place. But the Government certainly can restore money which has been paid to them in consequence of the Judgment of their courts upon ^a^ law which it regards as unconstitutional without justly subjecting itself to the imputation of encroachment upon the Judicial branch. Upon the assumption that the law was unconstitutional (of which there is no doubt) there are high considerations of policy as well as justice in favour of the measure. They will at once occur to you. There is an evident disposition to return to old feelings in Kentucky & various other portions of the Union which it is for our interest in Nyork to encourage. The notice of the subject would ^therefore^ be in keeping with that policy besides answering the other purpose to which I have already alluded. Ask Mr Butler from me to assist you in looking a little into this matter. It strikes me that it has been the constant course of the Government in England to redress in a succeeding reign all the violence which had been committed by its predecessor. Make my best respects to Mrs C. & to Mr & Mrs Butler & Mr & Mrs Marcy & believe me to be

Excuse me to my friends for not writing although I do not owe them any thing for none of them have written me. I have been unusually afflicted by cold & am now suffering from a swelled face.

P.S. I would publish the indictment in a note without the inuendo

Docket: Be a little careful with my letters. Suppose you destroy them. I shall feel the easier as the loss of them would be very bad. 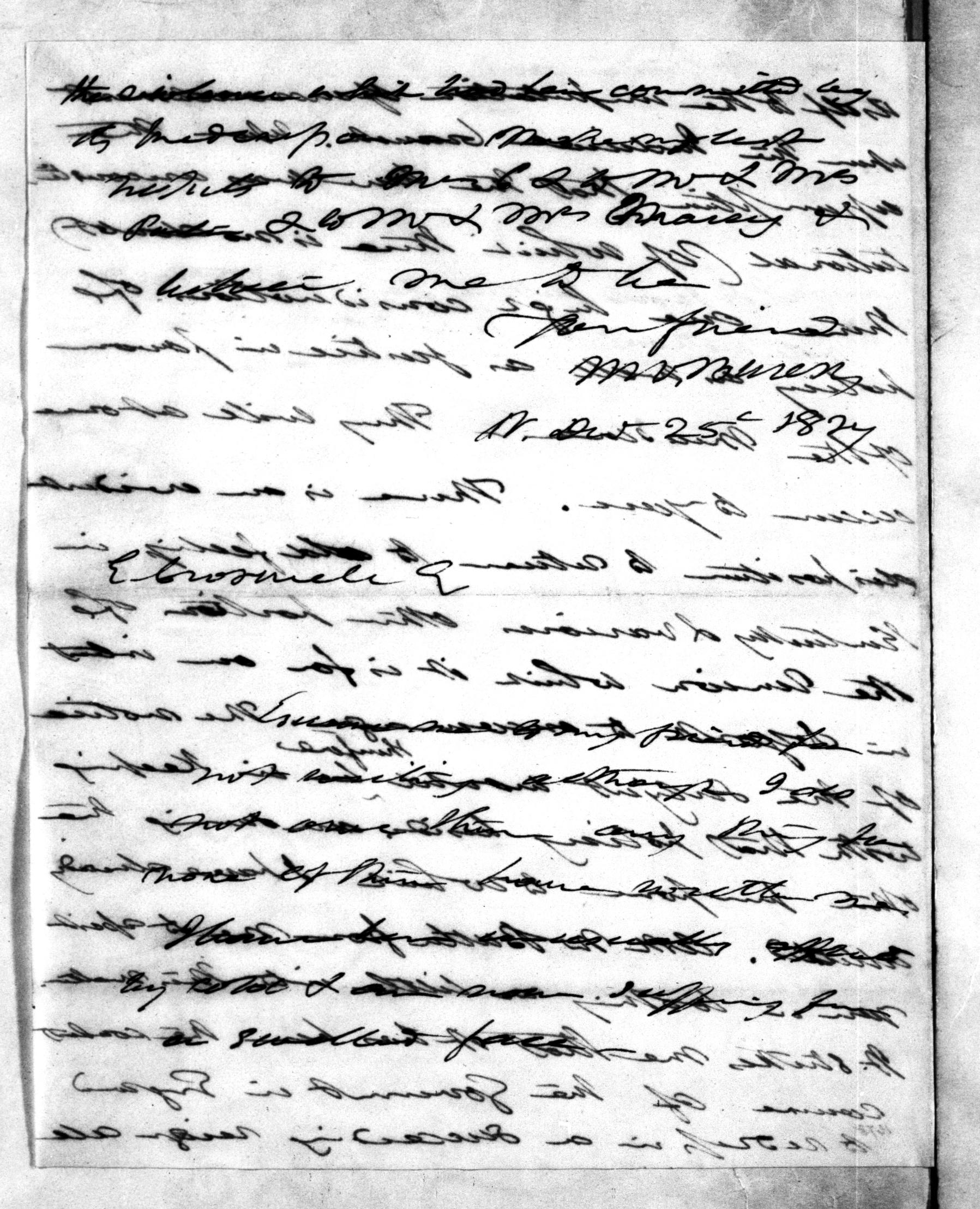 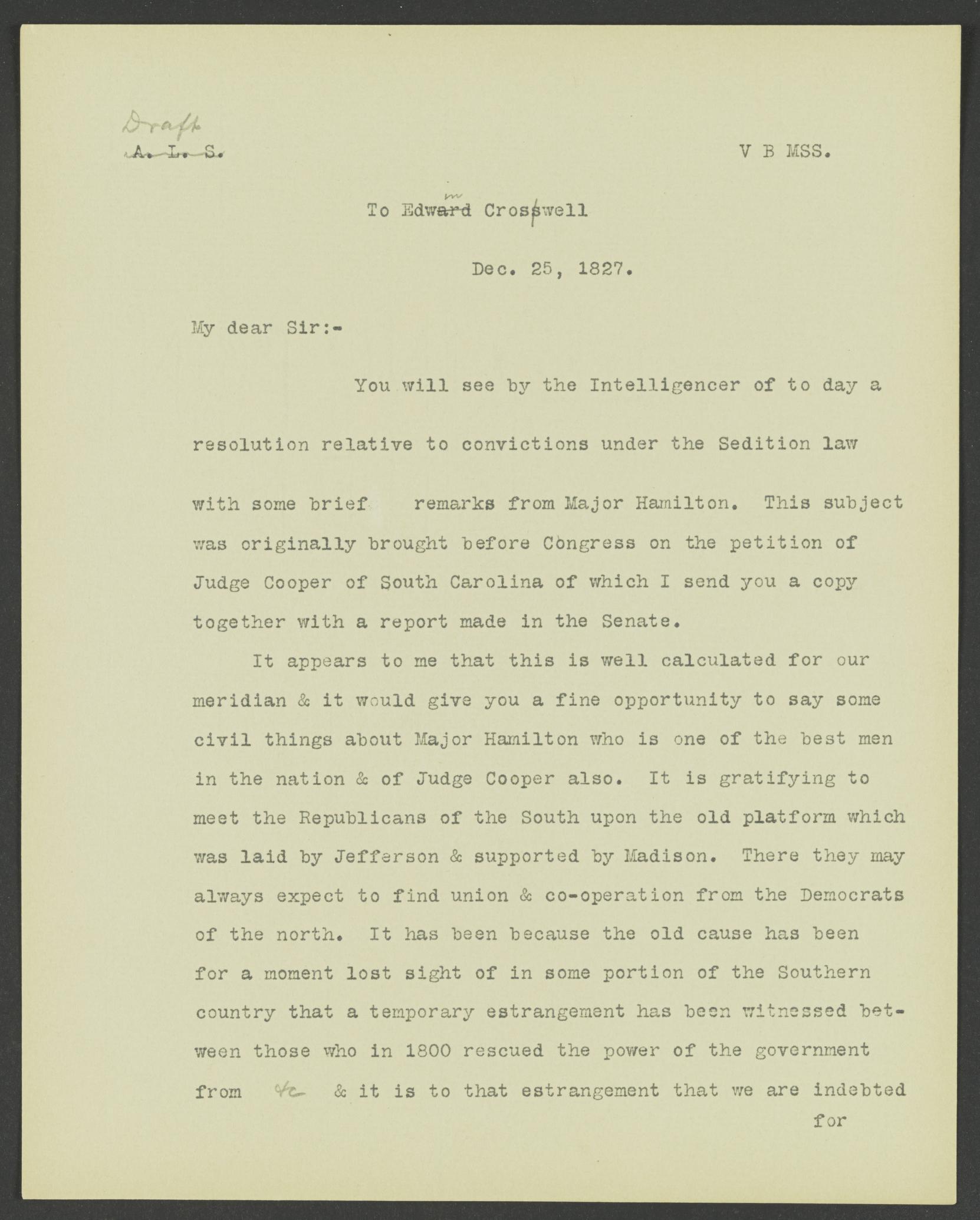 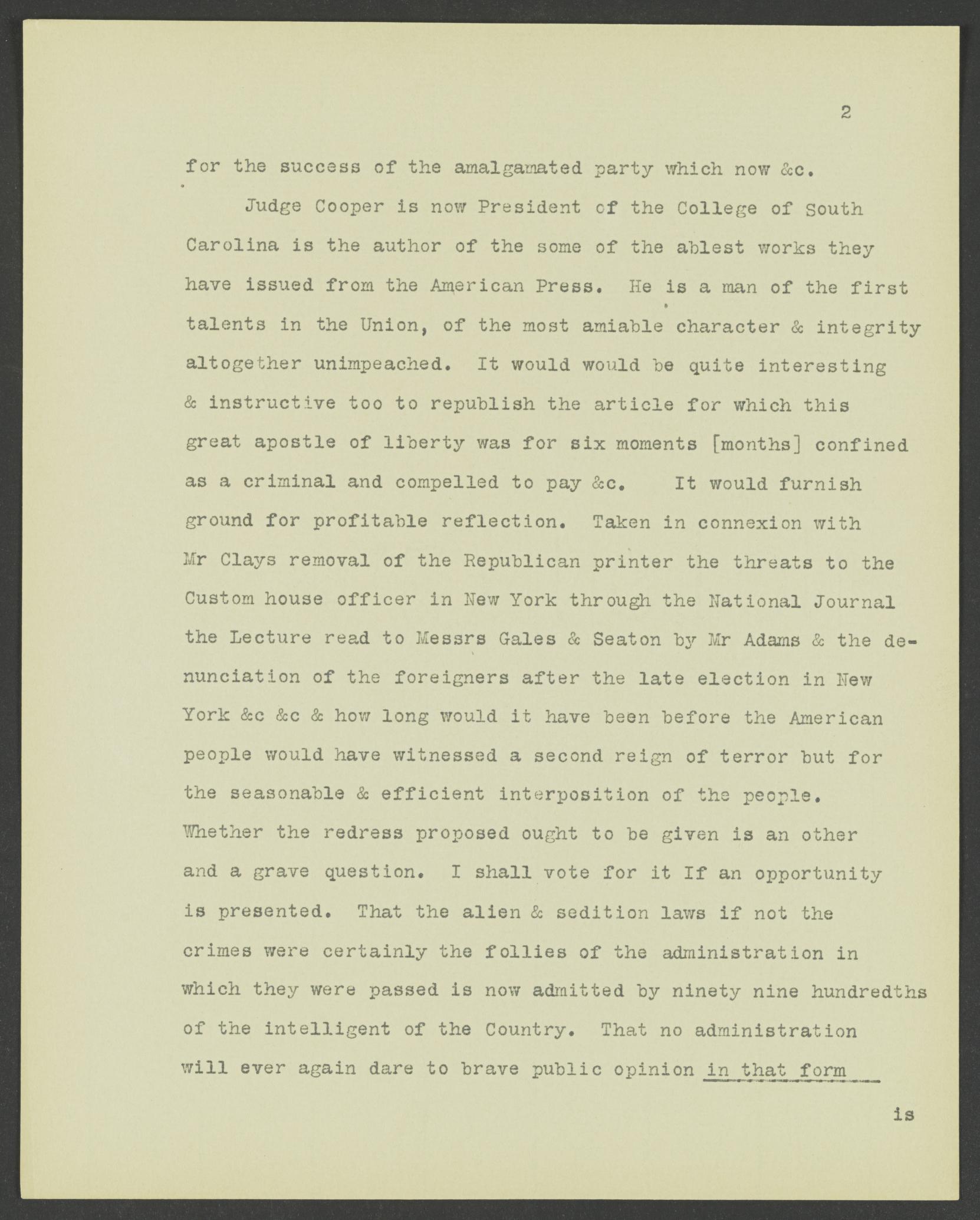 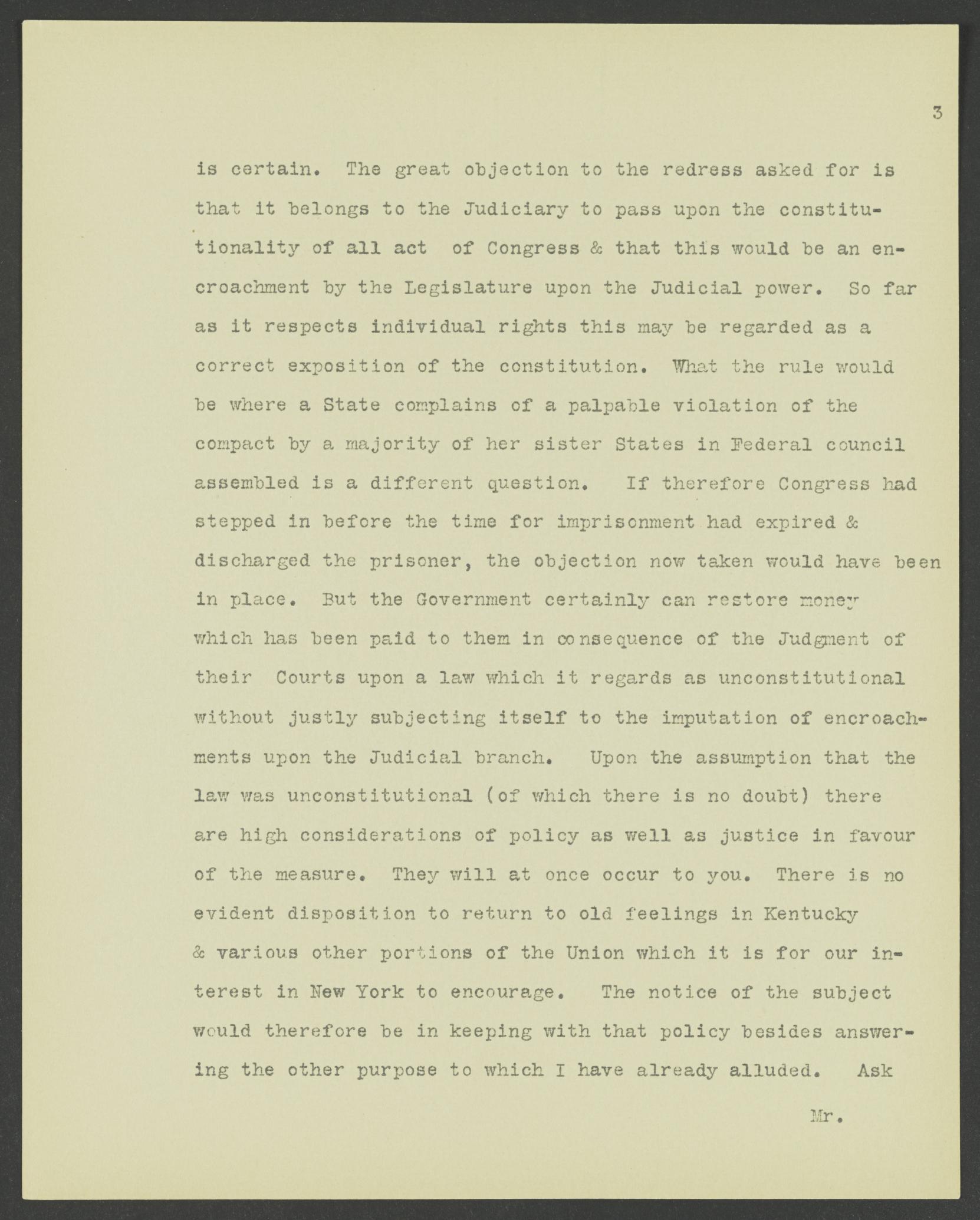 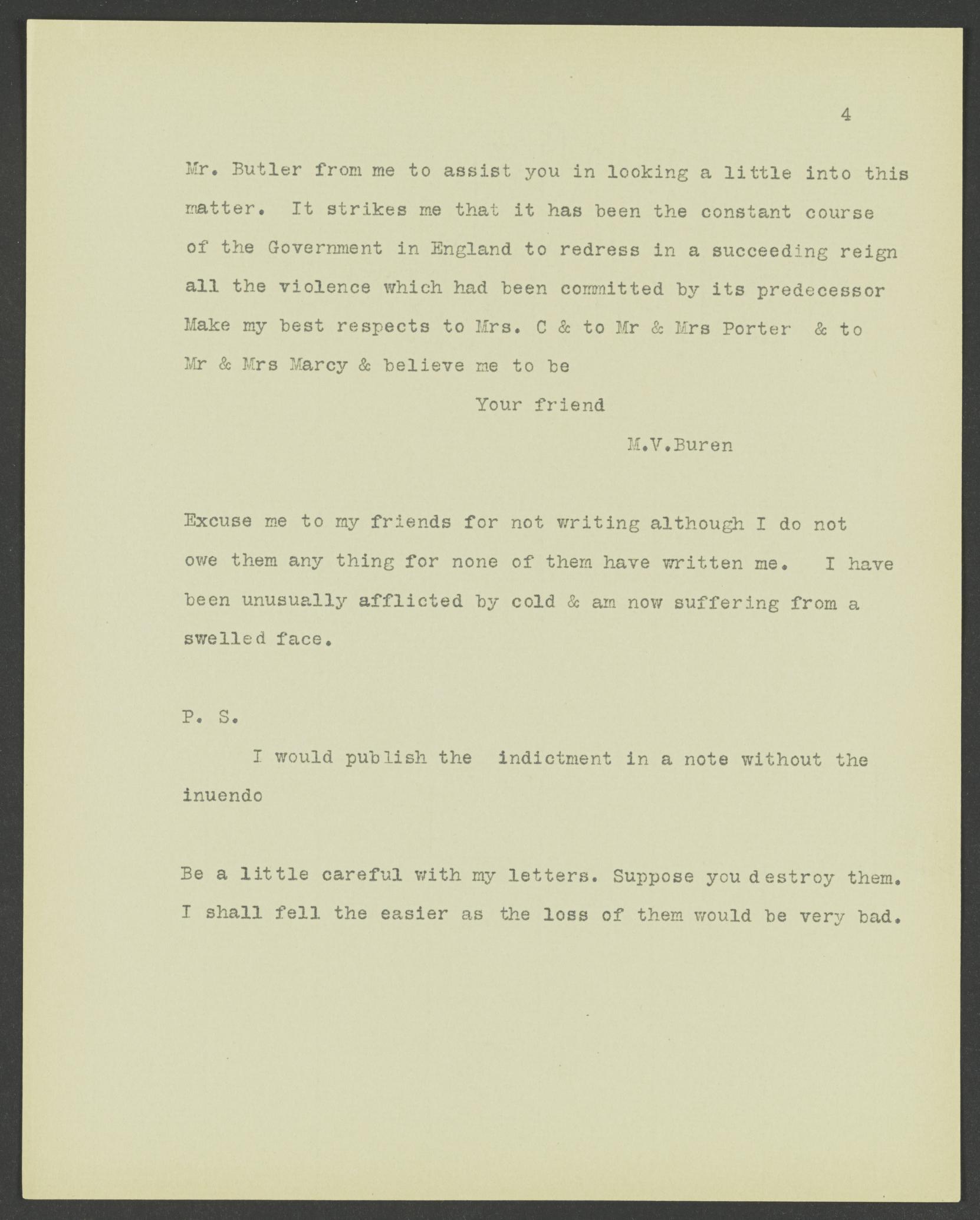