Excuse me for addressing you on a subject that deeply interests the Manufacturers and the whole community that is, the Woollens bill that will be before Congress at the approaching Session. Your friend Genl Marcy sent me your speech at Albany on the bill of last winter, which I perused with much interest. But permit me to allude to that Part, you thought exceptionable in the bill of last session of Congress, where you rest considerable weight, which is that the coarser fabricks worne by the poorer class of Citizens, are taxed at higher per cent, than the finer goods that are mostly consumed by the rich. If the effect would be, to tax the poor and but lightly the rich, all would agree at once, that the bill was unjust. But I think on deliberation and investigation, you will draw different conclusions. I believe it can be shown clearly, that in every case where competition in our markets has been secured to our own citizens, that the consumers have been the gainers, and the losers if any, are those enlisted in the competition. Already have the coarse Woollen Manufacturers created such a competition, that goods have fallen in price more than one half; and all they need is, the possession of our markets, to afford goods cheaper than can be imported. But for the foreign glut of goods made purposely for our Auctions, the Manufacturers, nor the Merchants can neither calculate the worth of goods or what they will bring till the foreign arrivals. Such is the precursory terms of our trade with other nations, that we cannot tell when we have finished a piece of broad Cloth, whether it is worth $2 or $4 per yard. You will recollect, that our cotton manufacturers were in a like predicament before the minimum duty was laid, and I will submit it to yourself if the same agreements were not then used, and with as much propriety as with the woollens, as to taxing the poor by a prohibitory duty. The result of the cotton protection you will know, therefore I will not make any remarks upon it. One thing is certain, that the Manufacturers only wish for the decision of Congress on the Woollens bill, to either prosecute or stop their business. I am deeply interested in the Woollens business, and if the bill should not pass, our company have already determined to shut the gates and close the factory doors. All the large establishments will be under the same necessity, and their proprietors agree with us, that the business cannot be sustained, and must be given up. A temporary relief would be worse than to let the Manufacturers down at a blow, as it would operate like a draught of cold water administered to a patient with a violent fever, checking it for moment, not removing the cause, but causing a return of it more violent than at first. If protection is to be given to our Manufacturers, let it be effectual, otherwise duty foreign goods for revenue only, and look to an impoverished Population for the support of Government. It is thought here, that as the parties are balanced at the present moment, the passing or rejecting the bill rests much with you. On this supposition, I have addressed you, Knowing as I do that if the bill should be lost, the most disastrous consequences will ensue. What the fate of our country may be, should the manufacturers go down, it is impossible for me to divine. Whether a majority will be ready and willing to become Growers of wool and drawers of water or otherwise, will be for time to develope. I hope you will seriously look into this great and interesting subject and act for Americans and their interests. I have but little doubt you will from a letter I recd from your friend Marcy. Be so good as to write me [yo]ur views on the protection system, and upon the Wool[lens] Bill, and let your sentiments be as they may, they will rest with confidence with me. I wish much to know on account of calculations I am about to make.

With great Respect I am your Obt Sert 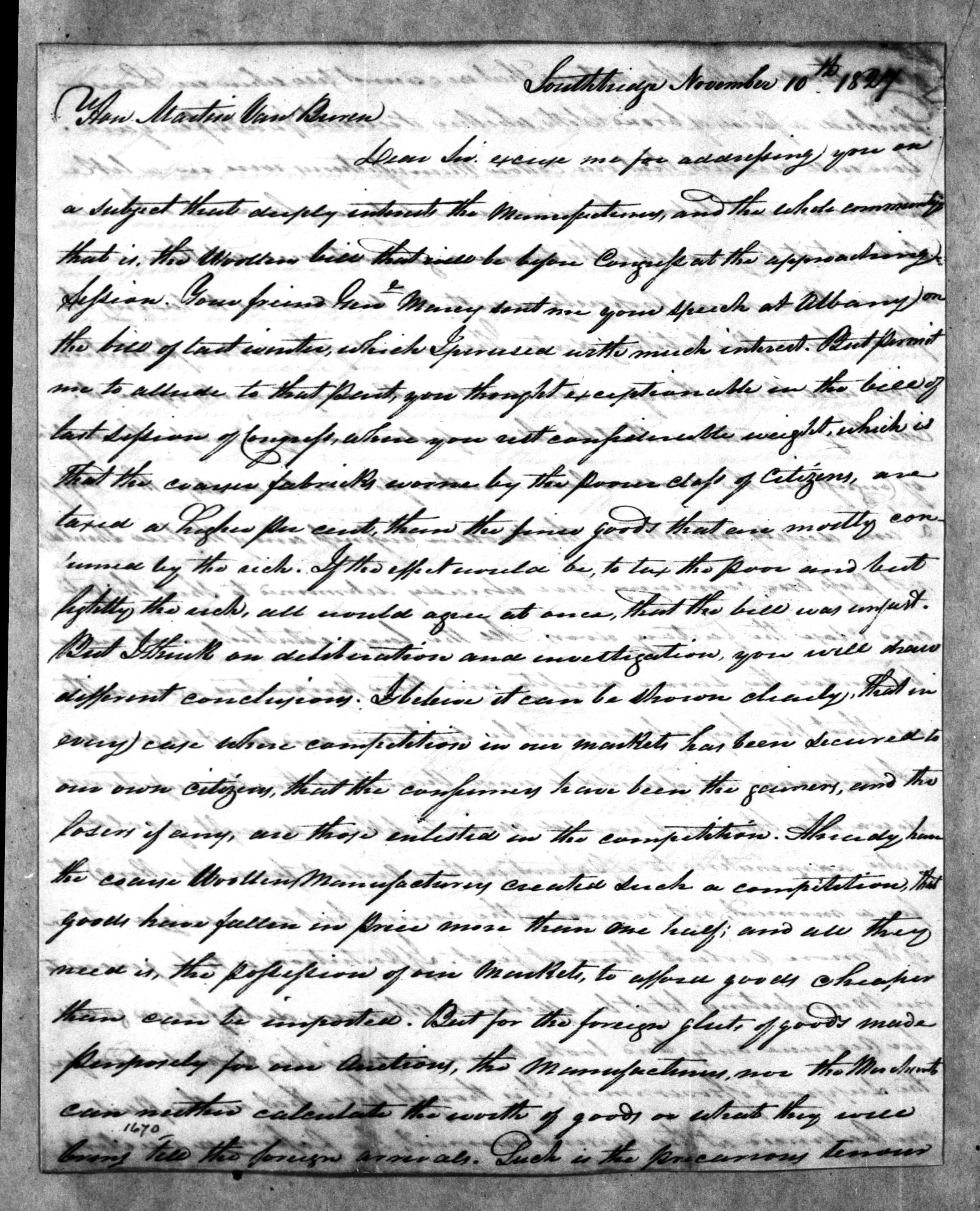 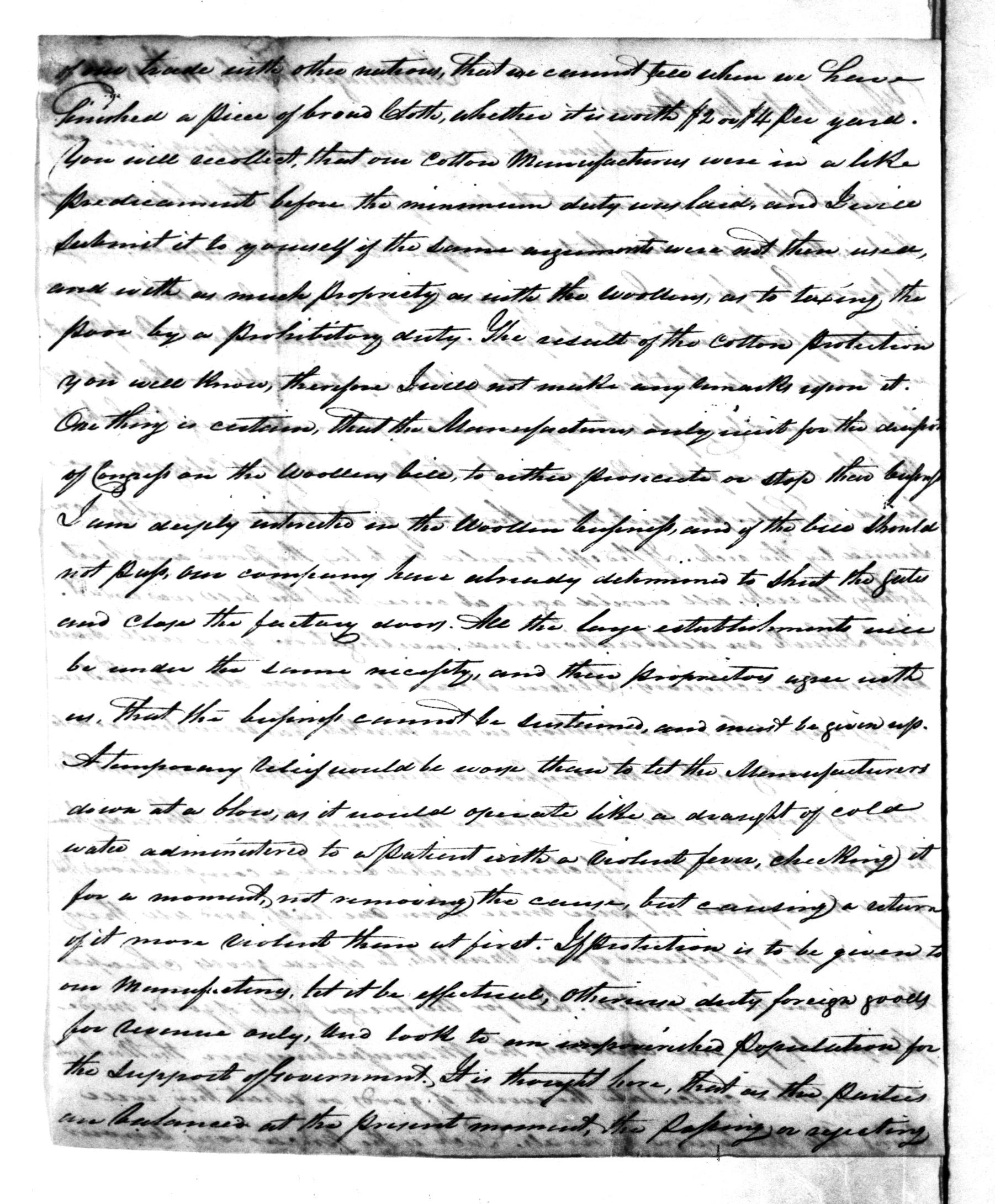 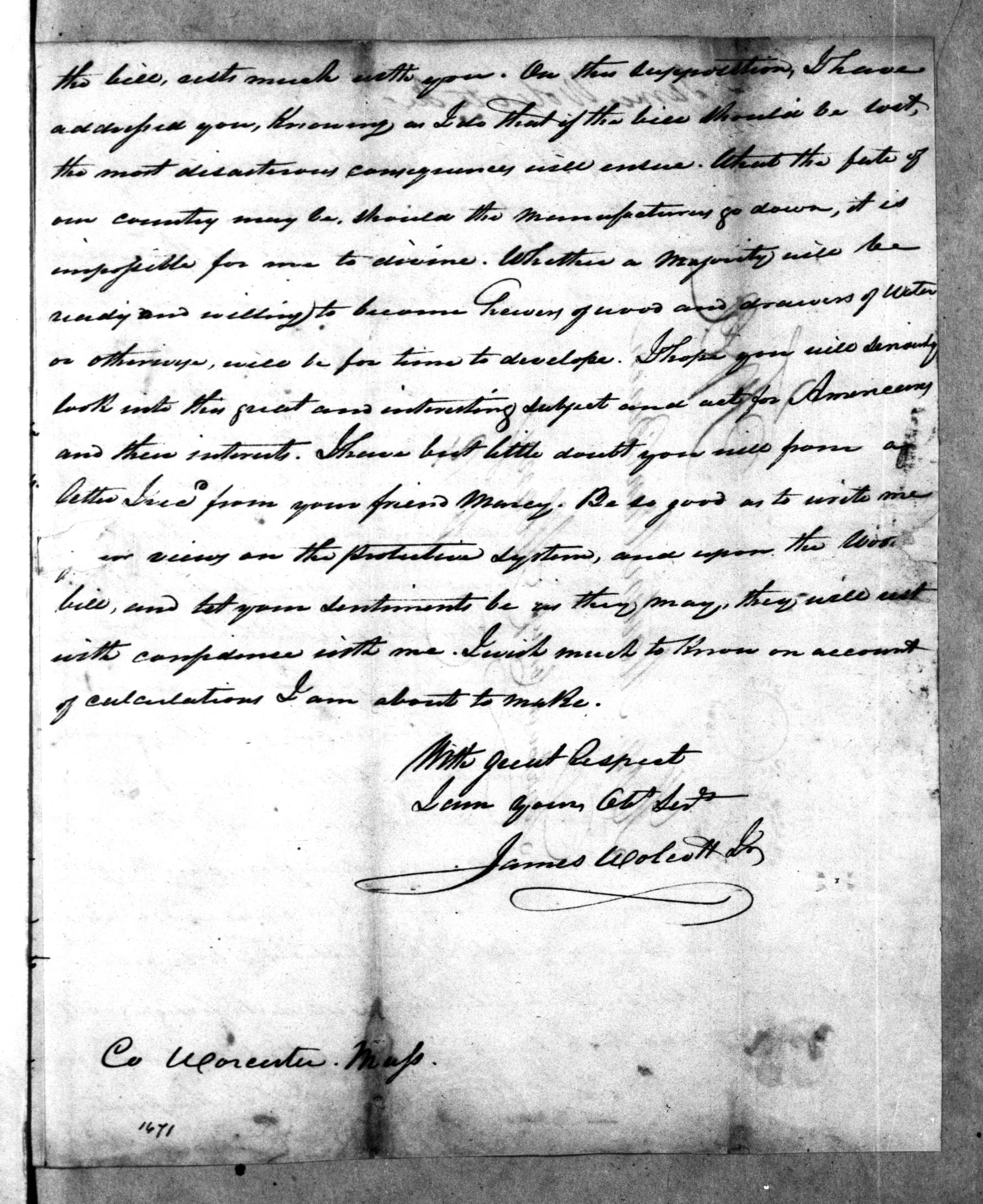 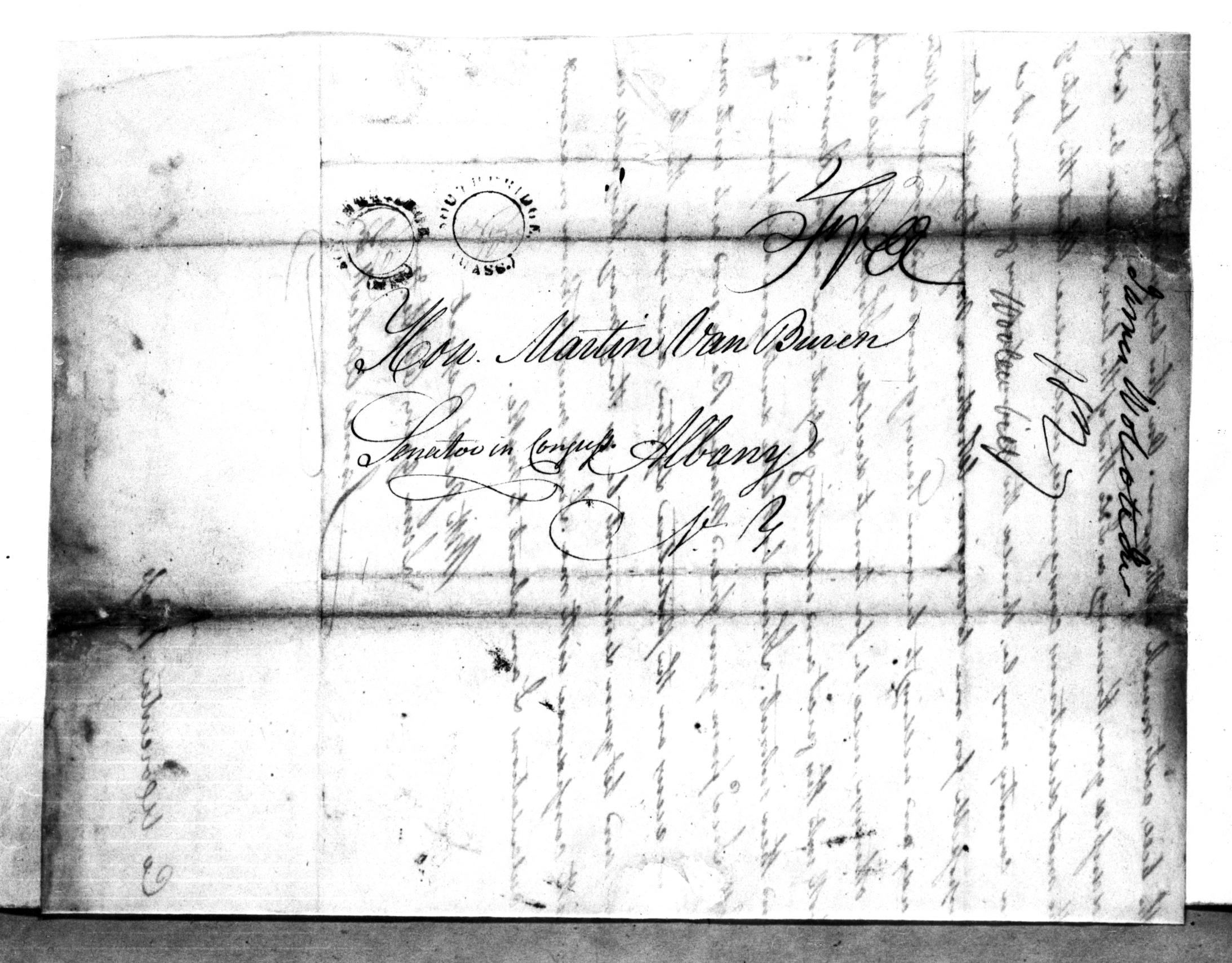